Last Thursday night saw Pete and I slugging it out between two 650 point evenly matched battlegroups.


My German Panzer Division battlegroup was spearheaded by two Tiger Is, supported by a platoon of Pz IVGs and a panzergrenadier platoon with PAK40 and HMG team.  Recce comprised a 250/1 with 4 man recce team and a 222, with off table support from 80mm mortars with an on table observer team.


We decided on a simple meeting engagement between the spearheads two thrusts, no objectives, d6 units plus scouts on table and 1d6 reinforcements from turn 2.  With equal scouts, I was lucky to win the initiative as well as having a slight edge with three units plus scouts on table vs two plus scouts for Pete.  I opted for a Tiger, Pz IV and HMG team to supplement the 222 and 250/1 team.  All moved to hull down positions on the subtle crestlines of the low hills in fromt of me, except the PzIV, which advanced into the woods on the right.  Pete brought on a KV-1 and a T-34, while his sniper team unsuccessfully tried to draw a bead on the HMG team.


In the next couple of turns, the Germans won the reinforcement race and soon had quite a gun line hull down along the line of hills and were trading shots with the Russian T-34s and KV-1s as they appeared on the left flank.  By the stage in the photo below, I was coming off pretty poorly, as I lost a Tiger to rocket artillery and two Pz IVs to T-34 fire, although I had KO'd a KV-1, 2 T-34s and immobilised a third.  My sole surviving Tiger was getting the range and starting to hurt the enemy. 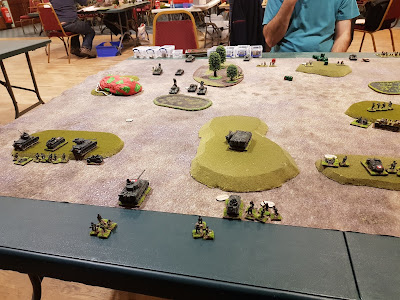 On the right flank, my Pz IV on reserve move in the woods was in a stand off with Petes KV-1 on ambush fire. 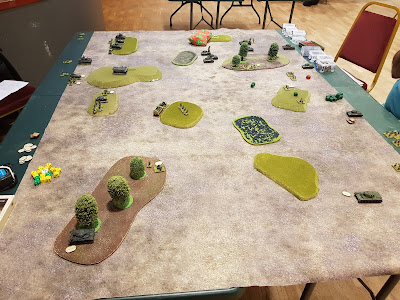 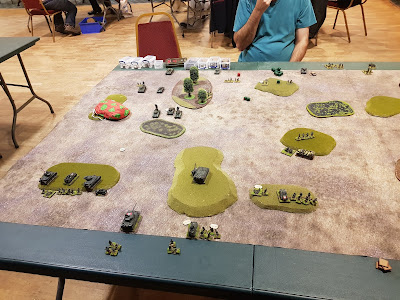 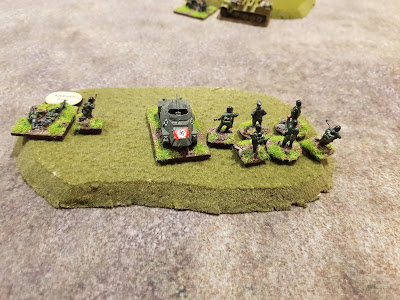 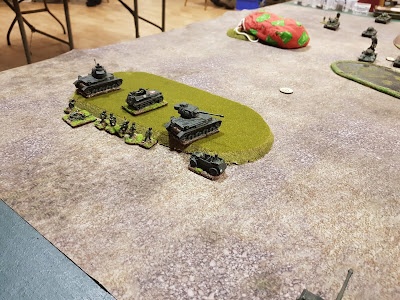 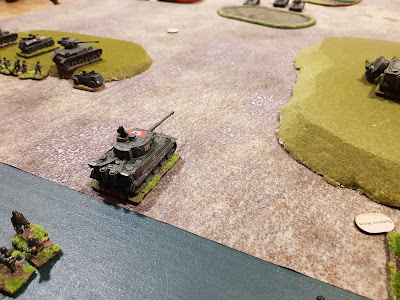 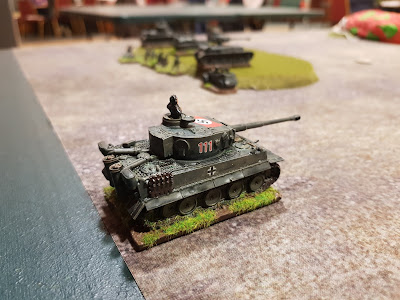 Not long after, a lucky double 1 immobilised my last Tiger, leaving me one running tank.  However, the Tiger could still shoot and, in a rush of blood, Pete tried to KO the Tiger by rushing it with his remaining T-34s and a KV-1.  Sadly, I had a PAK 40 in defilade behind a hill in front of my main line of defence, which took flank shots at Pete's armour, while the Tiger, receiving multiple non-penetrating hits, managed to roll beyond the call of duty tests successfully and fired back out of turn, KO'ing all the remaining running tanks. 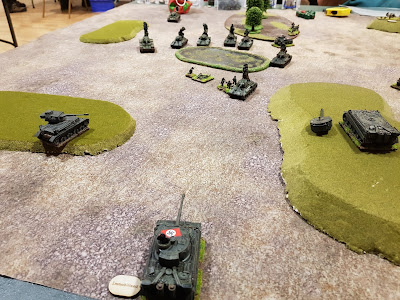 This left just the single KV-1 on the German right in the stand off with the Pz IV.  I reserve moved the PzIV to the edge of the woods, but out of sight of the KV-1 behind the hill, which forced Pete to move onto the hill and, in the trade off of shots, the KV-1 came off worst. 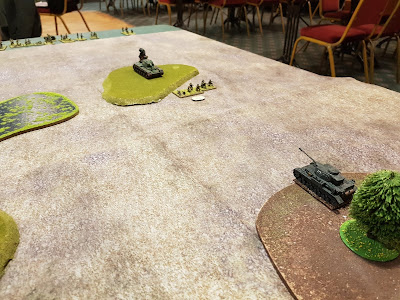 Meanwhile, on the German left, infantry scurried forward past the burning Russian tanks and whittled away the Russian infantry and command. 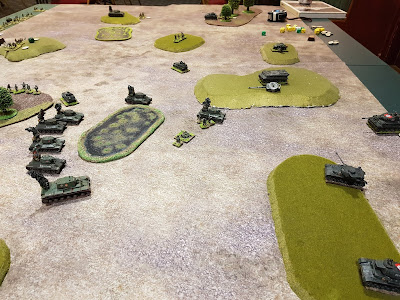 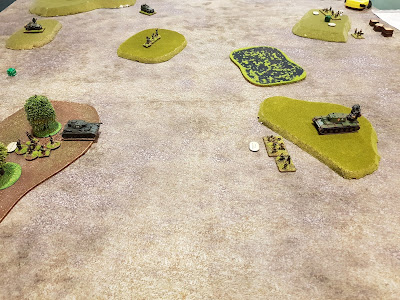 Pete's battlegroup eventually broke under the sustained losses.  Due to some really fortunate chit pulls, my chits weren't even at the 50% level, so a German victory.  It all seemed a bit pyrrhic though as I was left with only one running Pz IV, although I'm sure the Tiger could be patched up and got back into service once the Russian force broke.  All in all a great game, rather attritional and some interesting swings in fortune.  Those 12 dice from a Katyusha battery can cause havoc, thank goodness they only arrive every third turn.  This was the second outing for my early war German infantry, although the Pz IVs and Tigers were on their first tabletop appearance, so have broken their beginners curse.


As ever, thanks for looking.
Posted by Andy Canham at 13:45