French armour on the offensive 1985

Thursday night Ian and I played a CWC game at the Deeside Defenders club.  I brought along two cuirassier regiments of AMX-30s and a mechanised regiment of infantry in AMX-10Ps with AMX-GCT artillery support (FAOs attached to each regiment) and a couple of recon platoons in 4x4s.  Ian came up with a scenario which involved the French armoured division assaulting a Soviet CAT II Motor Rifle regiment in BMPs with T64s (not T62s as originally posted - thanks Ian).  We had a last minute extra player so assigned him a battalion of US M1s representing the advance elements of a breakthrough force aiming to exploit and French success.

The NATO rear area with artillery assets deployed and on table units awaiting mobile deployment at the table edge.  In the distance the US M1s on NATOs left flank.  In the middle and nearest the camera are two French armoured regiments, with the mechanised regiment on the left. 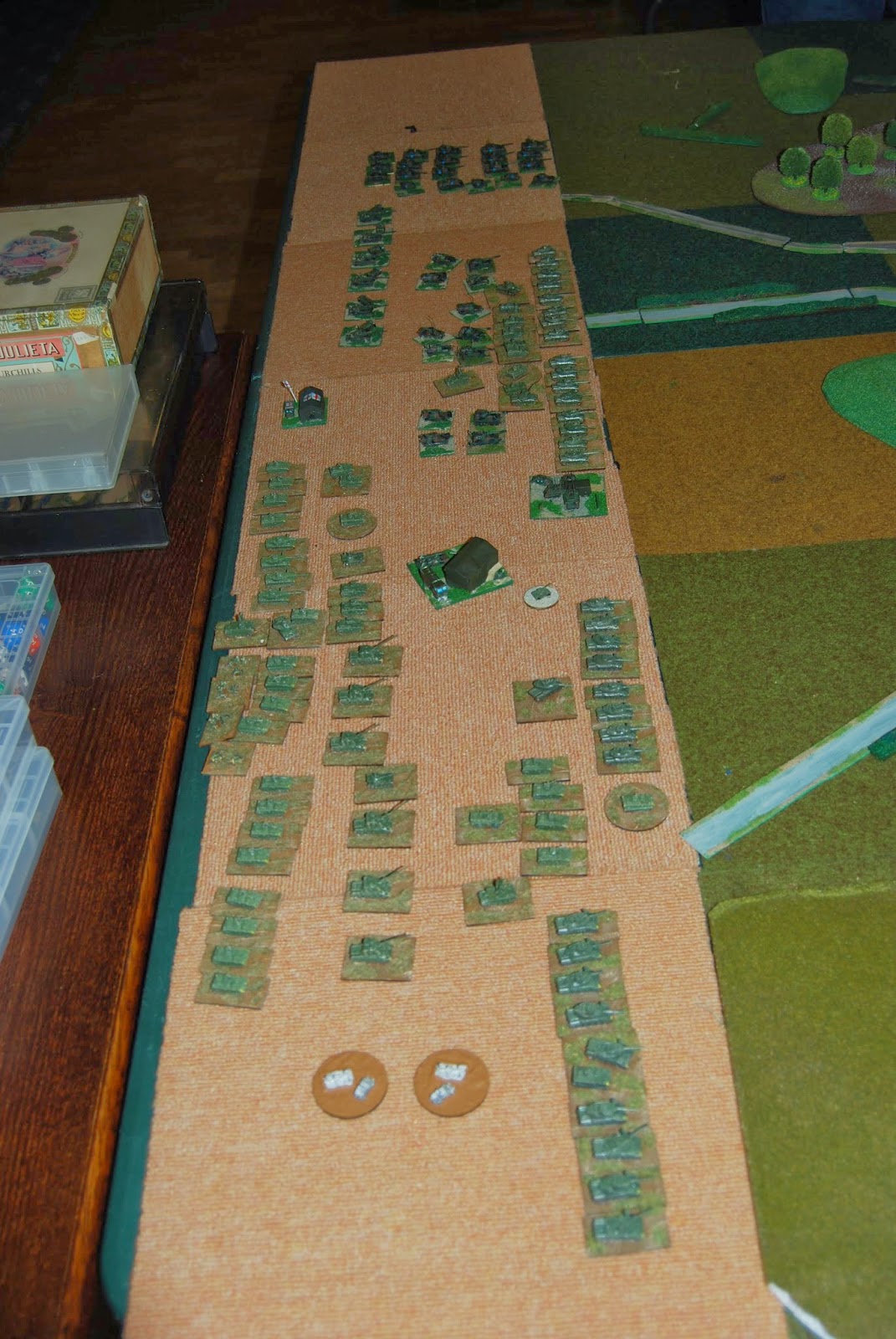 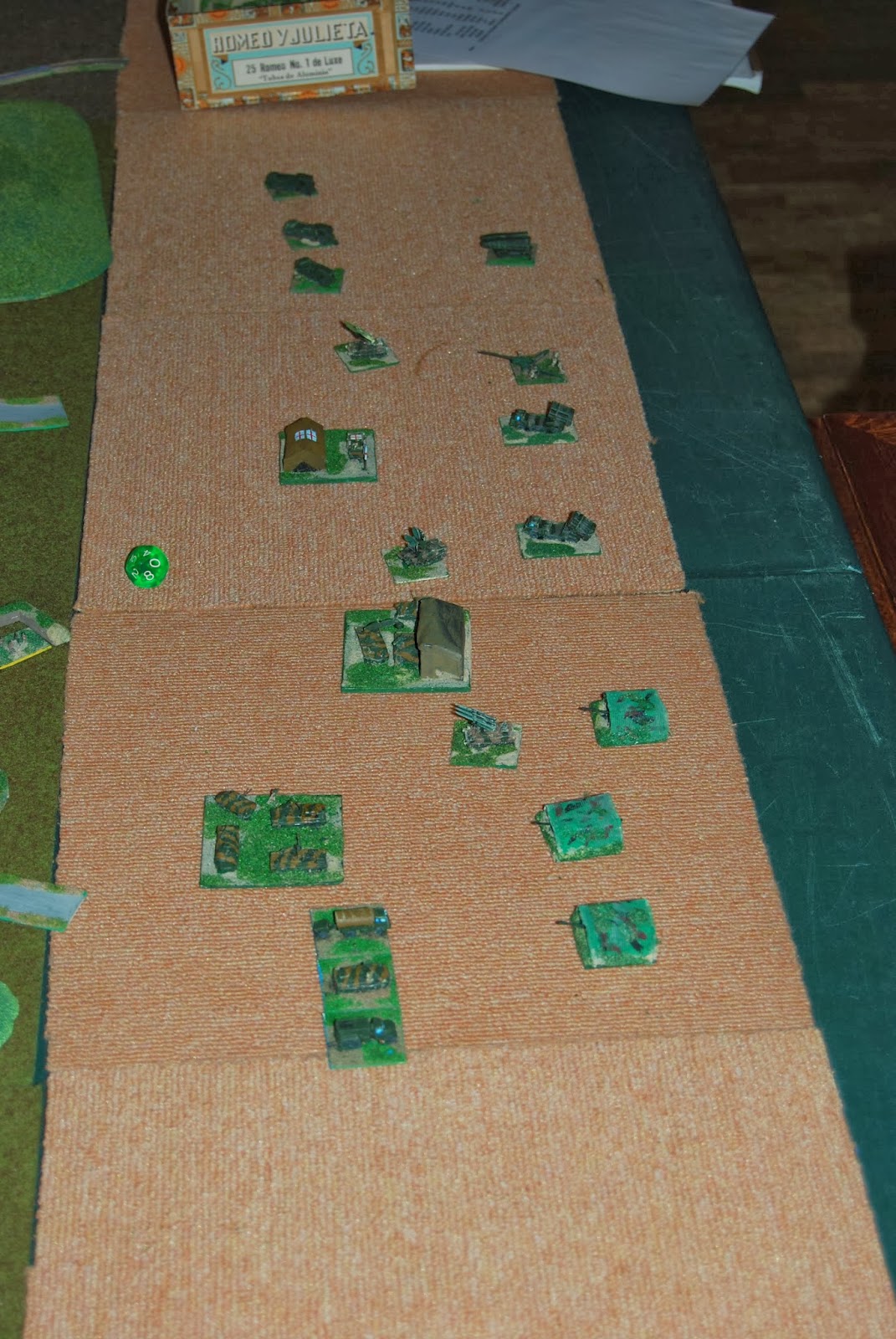 The table layout, NATO attacking from left to right.  We were attempting to create a situation on NATOs southern flank around 2-3 weeks after an initial Soviet invasion with NATO launching a counter attack south of Fulda towards southern East Germany and/or Czechoslovakia.  Therefore, the terrain was designed to represent farmland crossed by a road and rail network, with sporadic low hills and isolated woods. 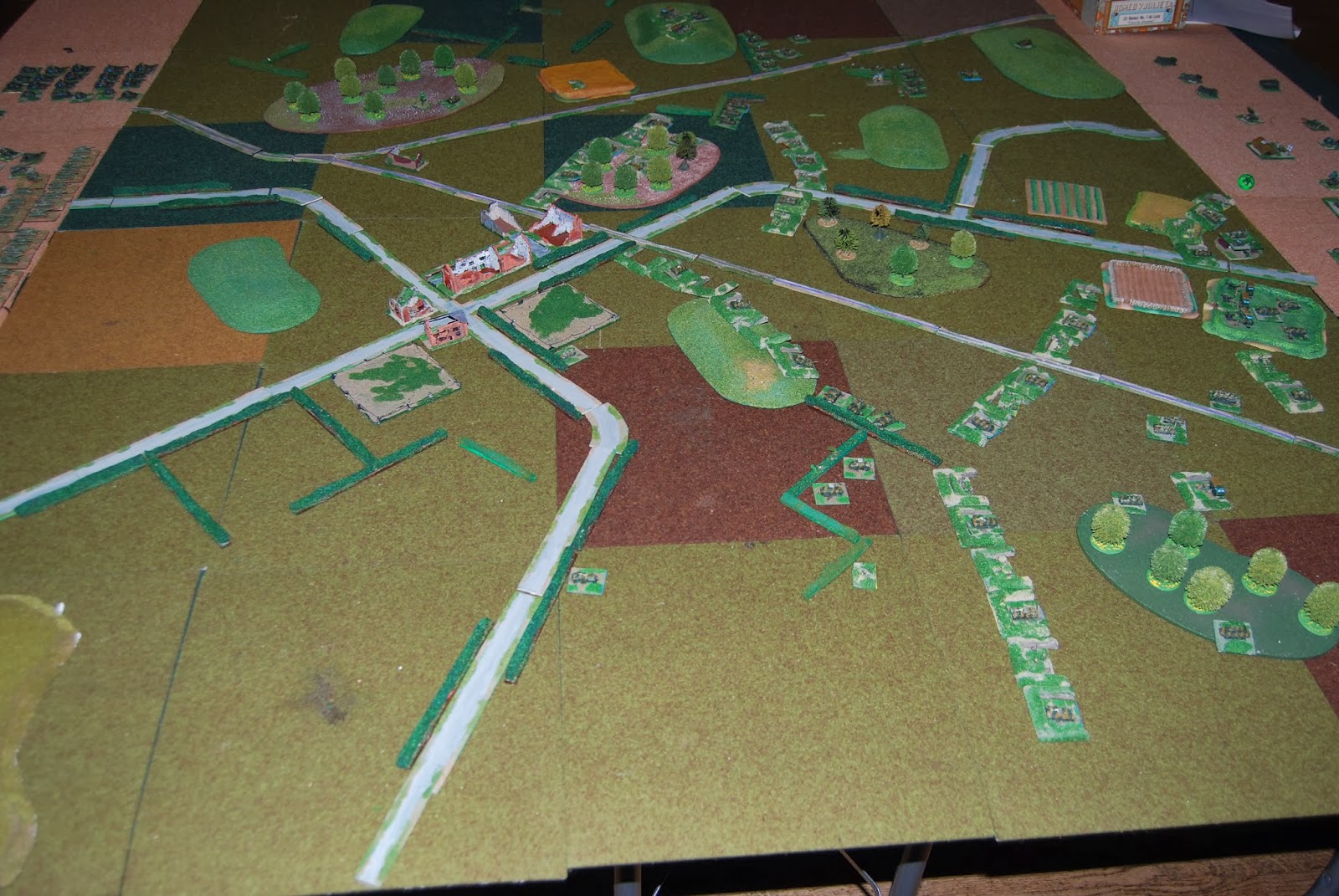 The French were told that there was no direct air support available, what air assets were around were interdicting the flanks along with helicopter gunships.  Opposition was to be a CAT II motor rifle regiment with the possibility of other armour assets to engage as the battle developed and the Soviets committed other assets.

The surroundings of the game at the Defenders club, with Ian (centre) engaging in verbal riposte with other club members. 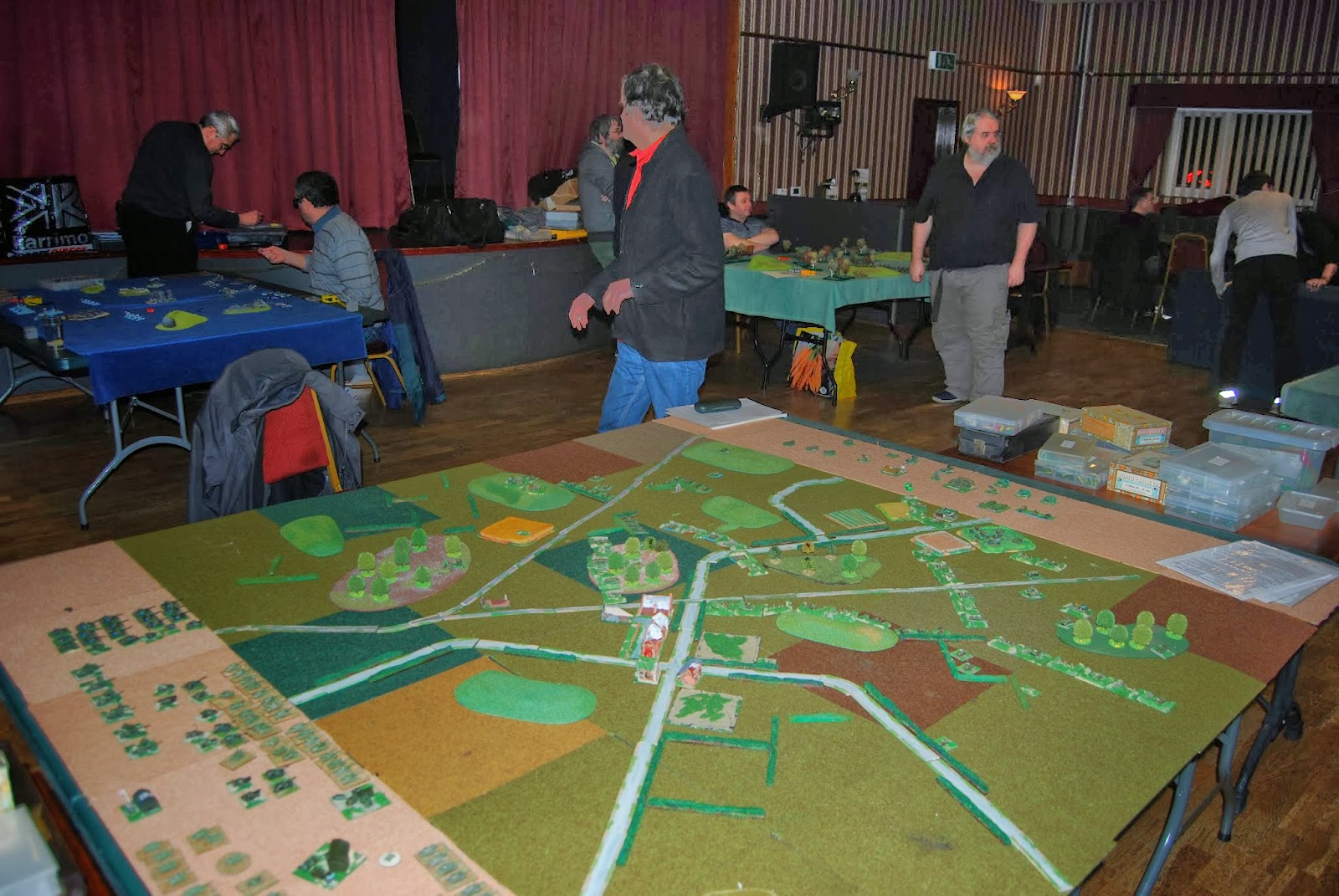 As Ian was dug in, it was assumed that NATO air recce assets had identified these positions, so first turn saw scheduled assets smoke the forces opposite the French centre and left flank with HE concentrations also hitting portions of the left and centre.  These HE strikes were largely ineffective in the centre, but destroyed a dug in AT troop and suppressed another on the French left, clearing the way for the M1 battalion.

The situation at the end of turn 1 with French armour advancing towards the central village engaging a Soviet motorcycle recce stand in the village and attempting to secure the French right.  The second armoured regiment has advanced to short range of the Soviets dug in to the edge of the central woods.  They have traded long distance fire with a company of T64s and Sagger fire from BMPs.  The M1s in the far distance are approaching the Soviet defences dug in on the hill.  Soviet rocket artillery firing ICM concentrated on the French right, causing hits and a few suppressions, allowing BRDM-3 firing ATGM and T-64s to pick off a couple of stands. 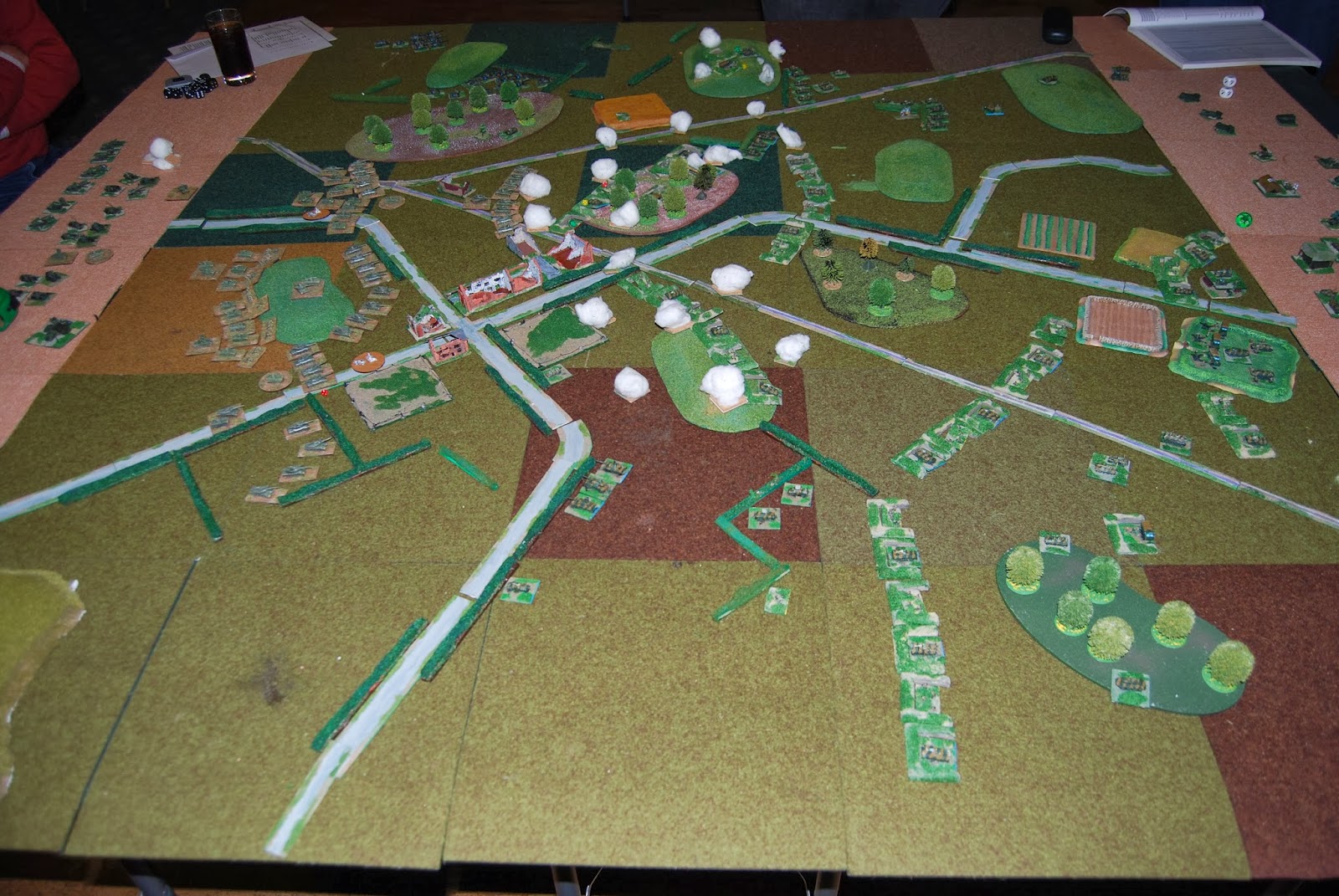 In turn 2, the armoured regiment on the French right exchanged largely ineffective shots at long range with the T-64s and put paid to the recce stand.  In the centre, the French armour effectively neutralised or destroyed the T-64s and BMPs in front of them and close assaulted one of the infantry stands, destroying it.  On the left, the M1 battalion advances around the left of the hill, attempting to flank the remaining Soviet defenders, although a storm of HE sweeps the last dug in AT gun from the crest of the hill. 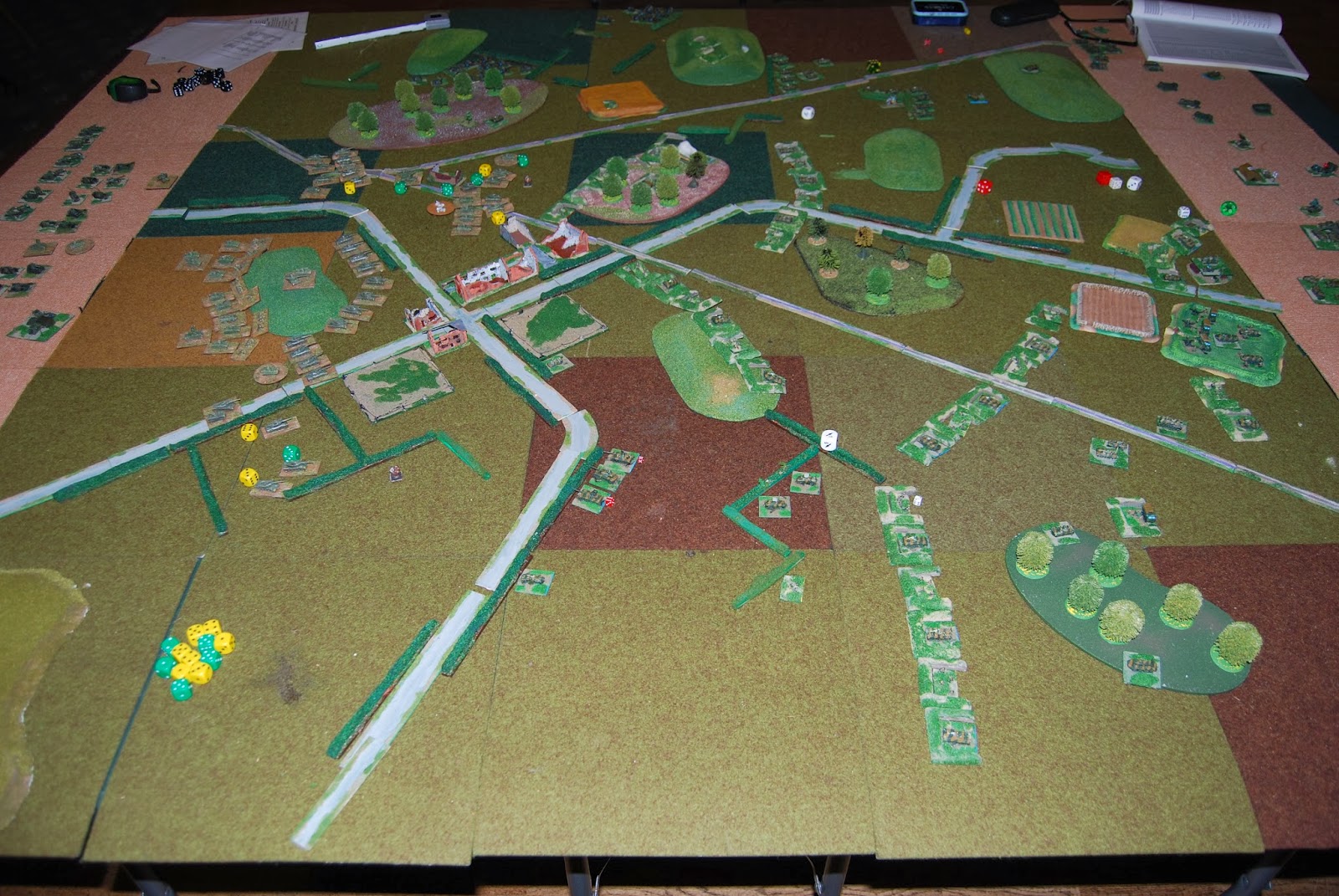 In more detail, the French in the centre can be seen suffering the effects of IATWs and long range Saggers and T-64 fire, although the Soviet defenders in the woods behind the village are almost eliminated. 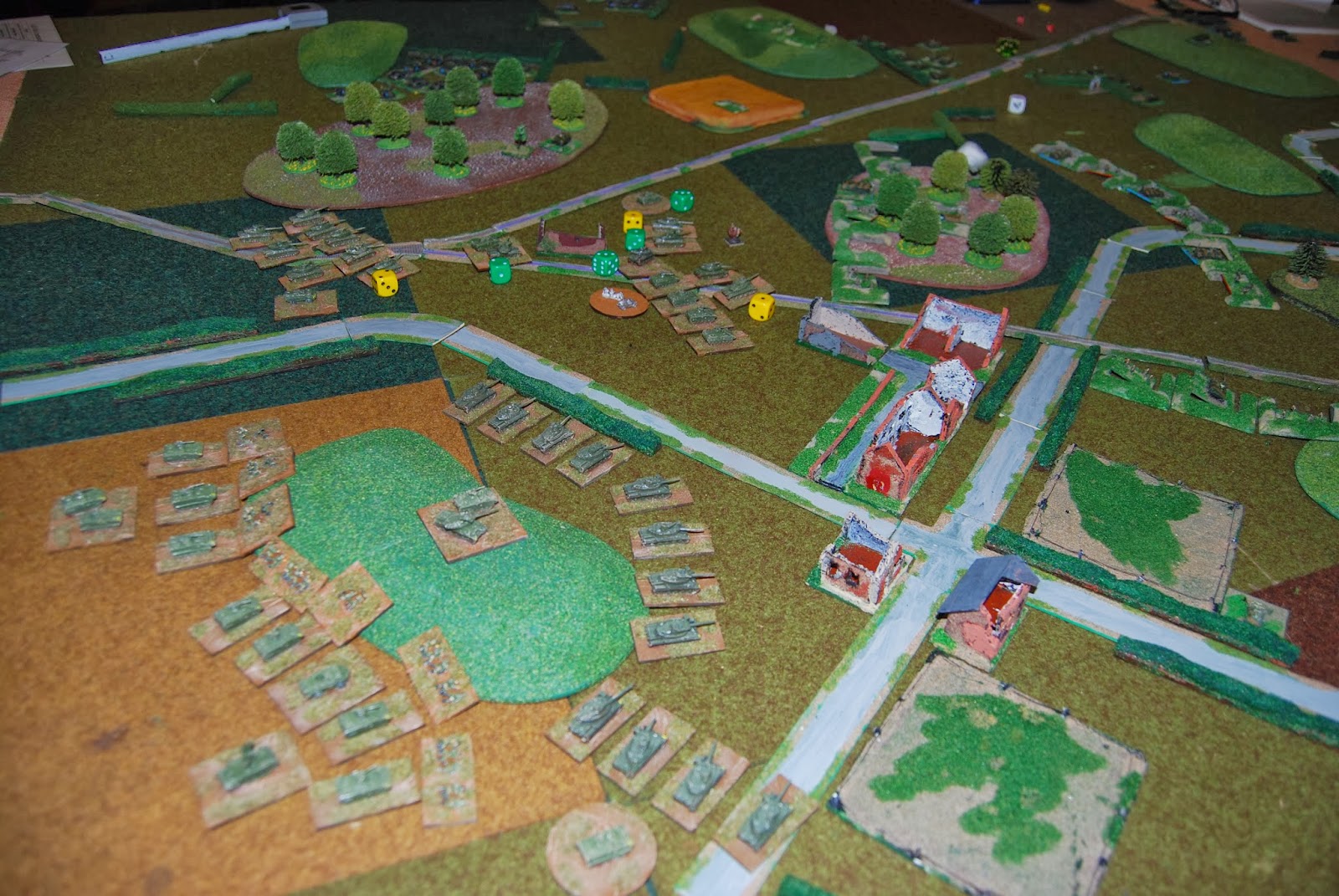 In the left flank, the M1s fail their orders just short of getting a flank shot into the BMPs which have been causing at least some harm to the French centre. 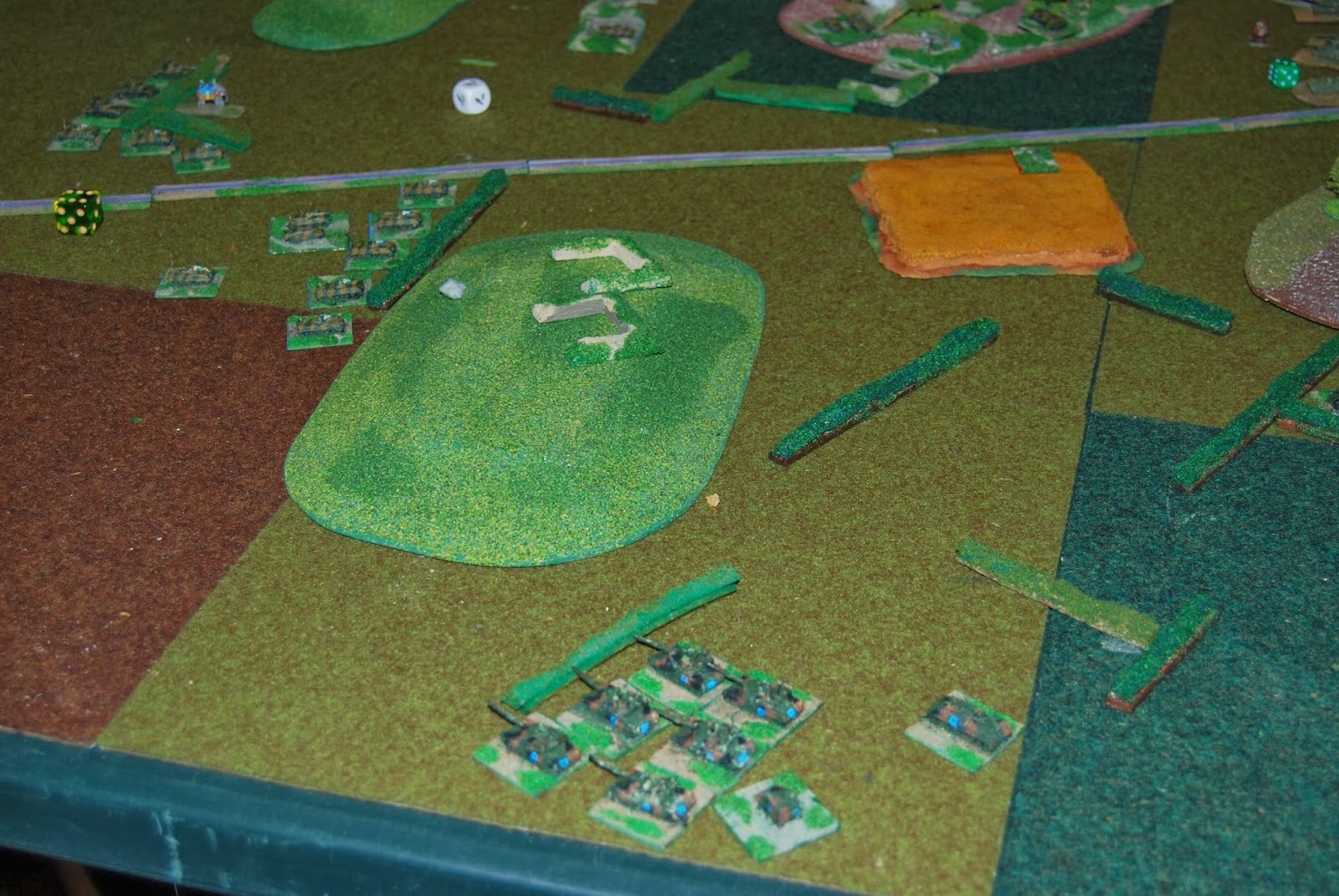 In turn 3 the French right continue trading shots with T-64s behind the hedges to their front, while the French centre tried to finish of the defenders in the central woods with close assaults by the mechanised company, and took on the T-64s behind hedges beyond the woods.  Artillery was pretty ineffective this turn, but US CB fire more or less silenced the Soviet rocket artillery, which was nice.  IOn the left flank, US M1s edged the hill and opened fire on the move on the BMPs deployed behind hedges, destroying them pretty efficiently, before destroying/suppressing the T-64s which had been firing on the French centre. 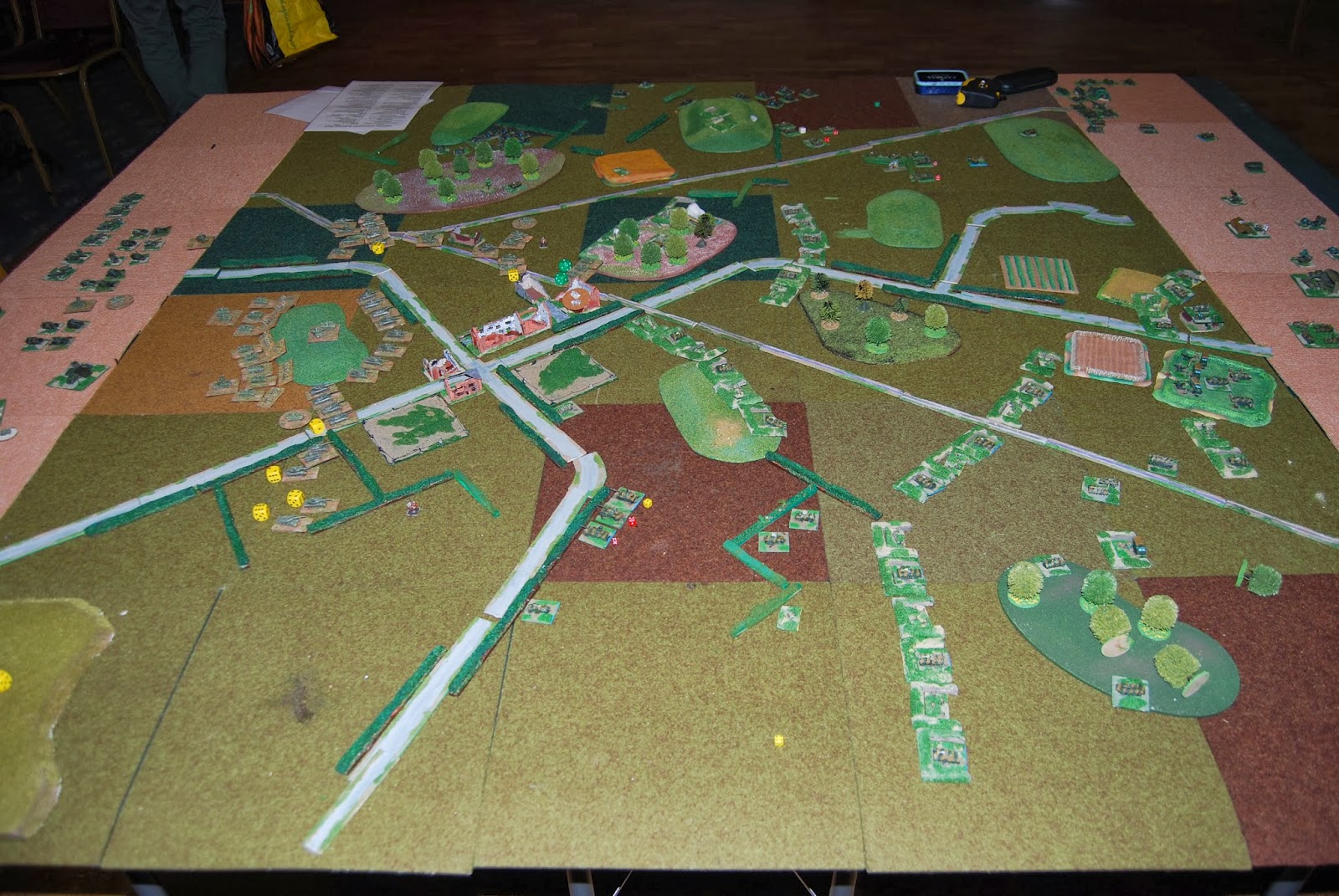 In more detail, French AMX-10s can be seen just beyond the village, fresh from their mounted assault on dug in infantry. 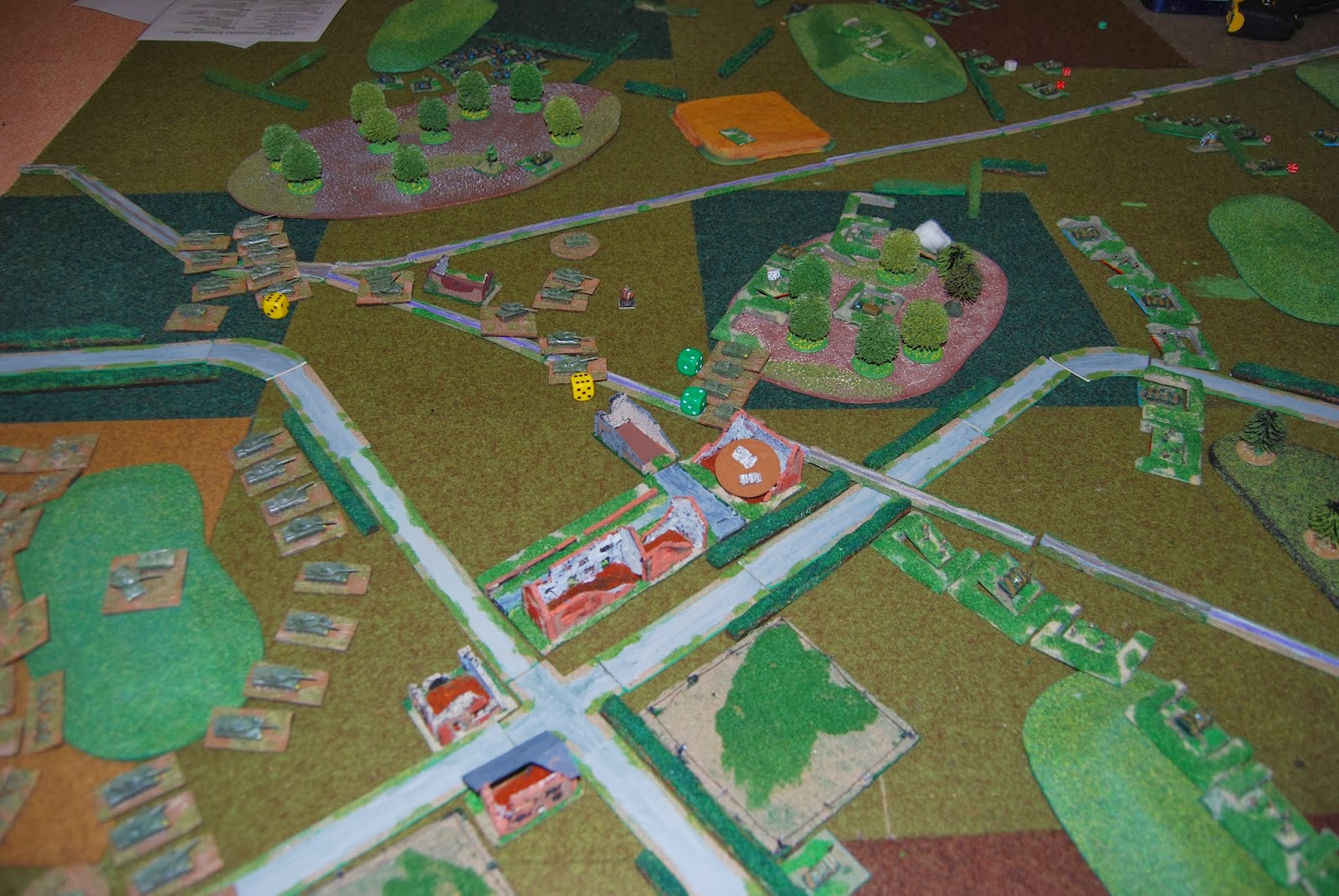 View of the fire zone for the BMPs Saggers waiting to take on the oncoming French armour. 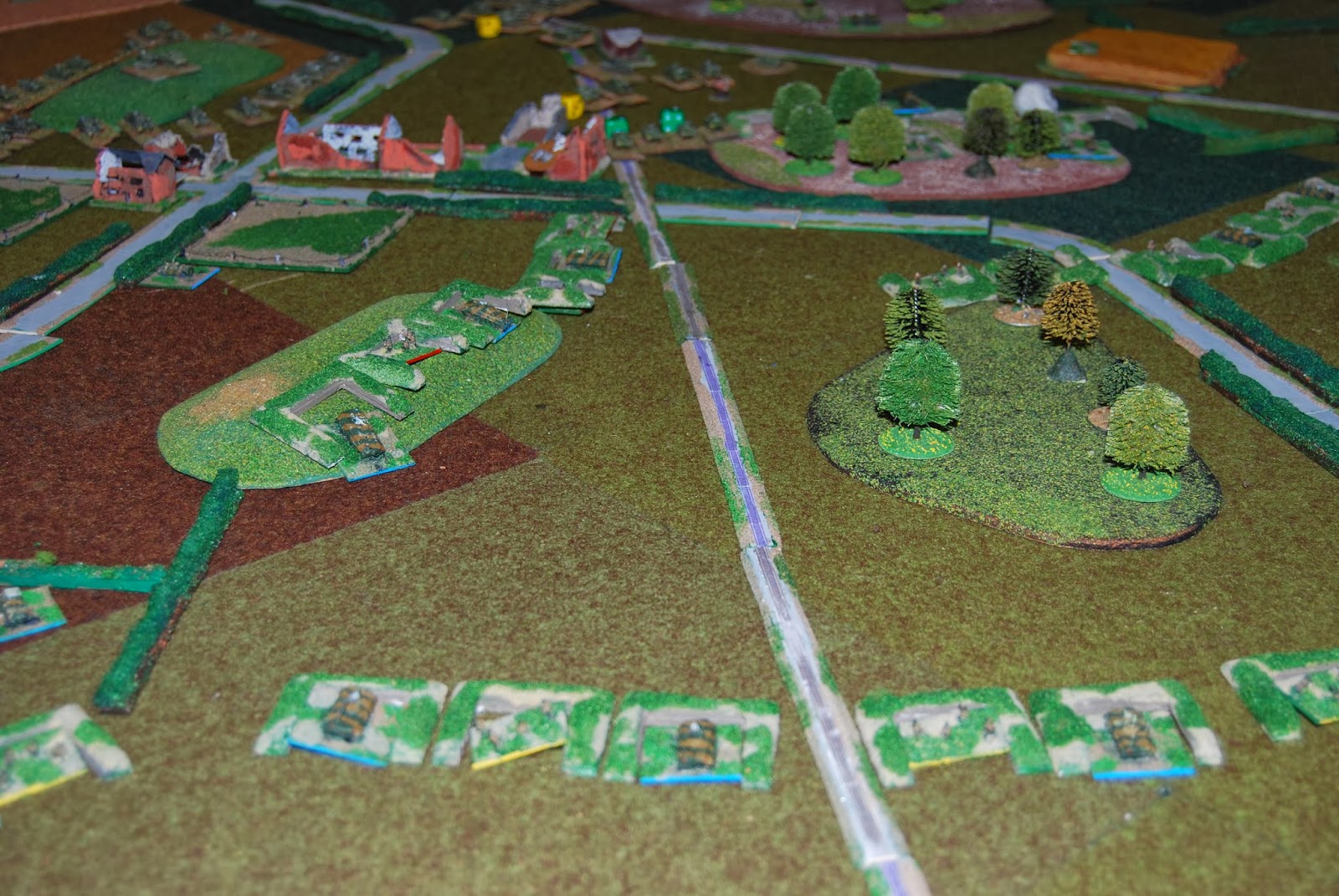 The US M1s having effectively silenced the BMPs and T-64s, have turned the Soviet flank. 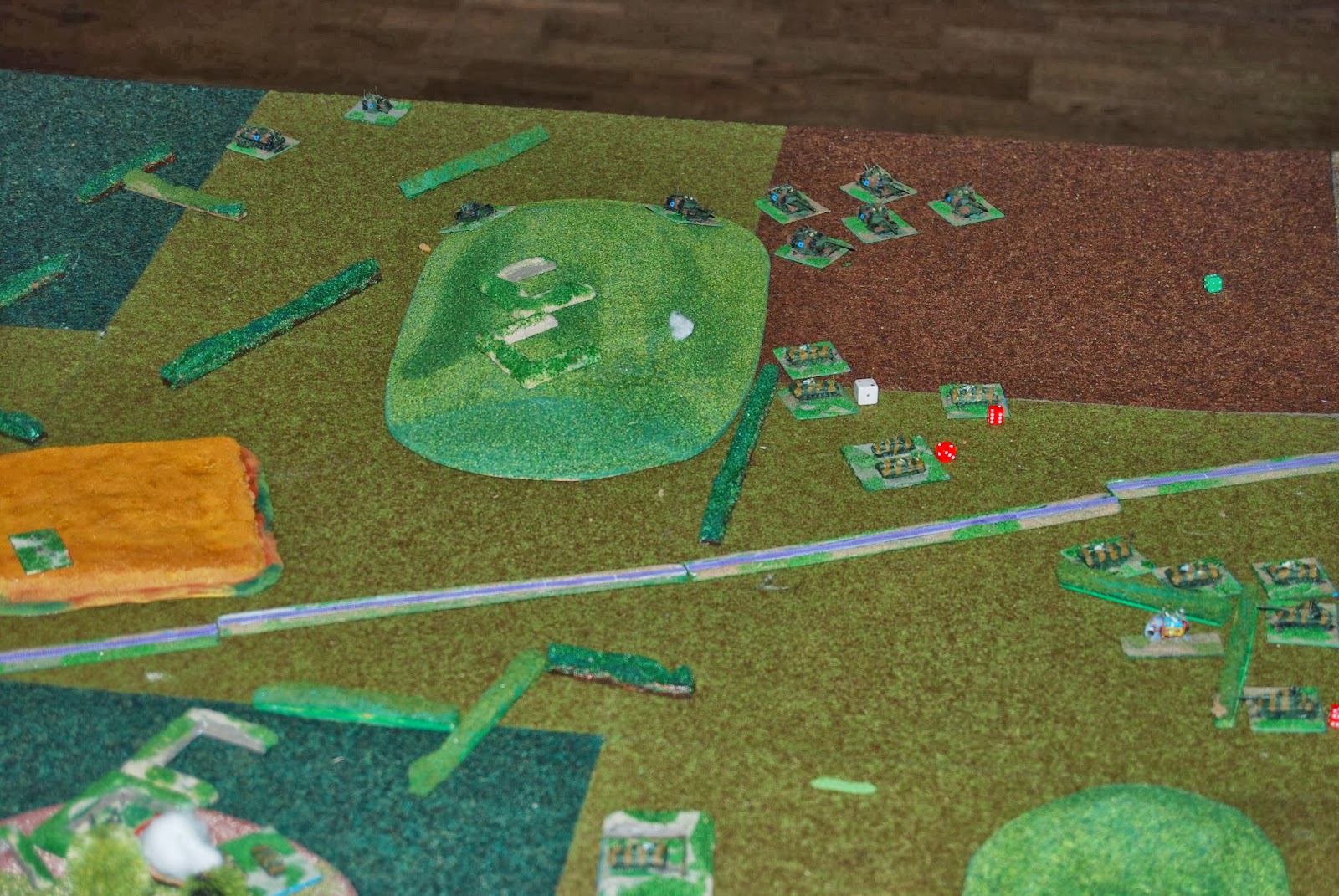 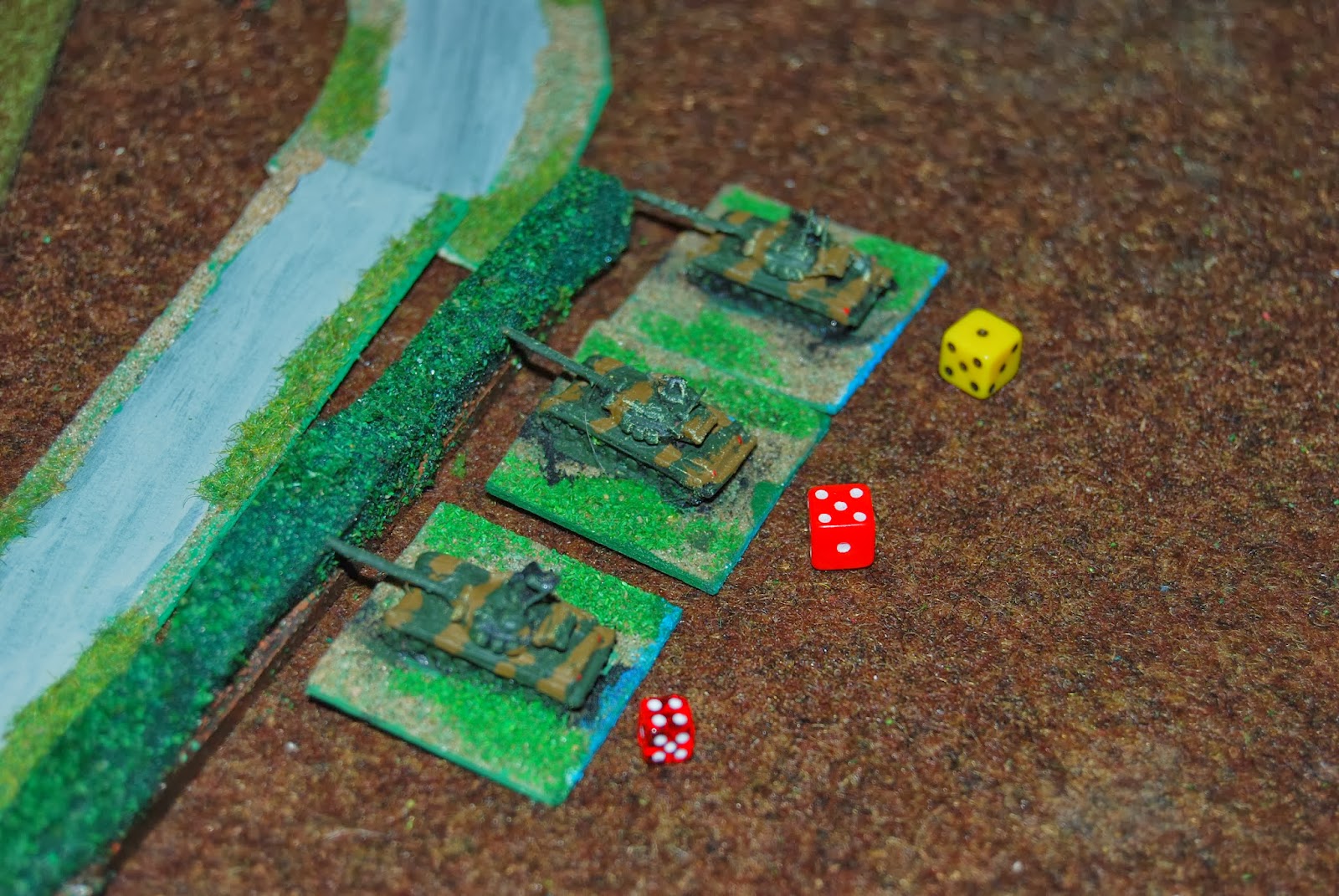 At this point we ran out of time.  I suspect there would have been some hard fighting ahead for the French, but the US M1s were free to roam the table largely at will, so the result was a foregone conclusion, unless the Soviets could get their armour reinforcements on the table.

There were some interesting conclusions, not least from the French point of view, just how brittle the AMX-30s are.  They pack a punch and have a reasonable number of hit points, but a pretty lousy saving throw, so can only really survive on a battlefield lacking a lot of armour and ATGM and even then really need to move rapidly from cover to cover.  They aren't going to be easy to play in a stand up fight.  I suspect there will have to be lots of artillery and air support to give them any chance unless they are up against second rate motor rifle units.  Even T-64s can out match them!

Thanks for looking.
Posted by Andy Canham at 13:04