Saturday saw the first day of the Gauntlet show organised by the Deeside Defenders at the British Aerospace Sports and Social Club in Broughton near Chester.  Will provided all the scenery and the game scenario was designed by Richard C.  Figures and vehicles were mostly provided by Will and Richard too, although I put a platoon of German winter infantry on the table.  Little Si, Will and I each took a German platoon and attempted to navigate the length of two boards, 12ft or so of gaming table.  John and Gary each took a platoon of Soviet infantry plus supports, while Richard P took a section of ski troops to add some flank worries to the Germans.

The table layout below; Germans started from their defences on the left hand table edge, negotiating villages, woods and a small stream, with the possibility to loot or rescue various caches of weapons, transport, food and booze hidden in terrain features along the way.  The Germans were given a three activation head start to reflect them trying to slip undetected out of the front line and make some distance before their withdrawal was noticed. 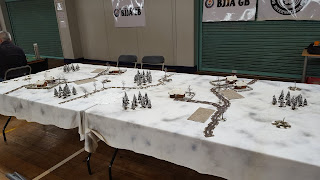 Looking from the far end of the table back towards the German starting table edge in the far distance. 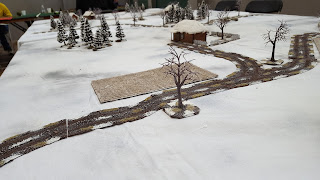 I took the German right flank platoon, so my troops were to move along this table edge. 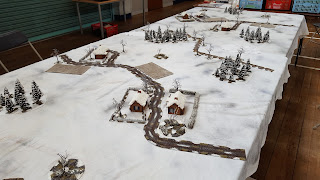 The left flank, where little Si's platoon was going to operate. 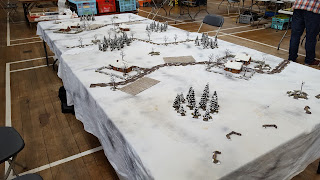 And we're off.  Will's platoon goes crashing into the village, while my troops skirt around it.  In the distance, little Si's troops find a boat - if only they could find some way of transporting it, it could come in handy trying to cross the river to reach safety at the far end of the table. 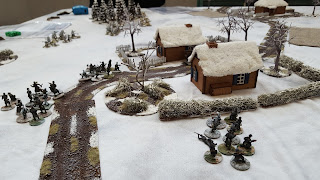 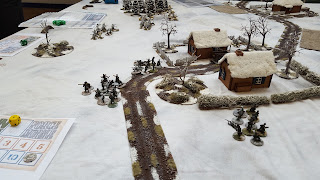 Will's troops find a cart and horses in the village, so he decides to crew it and send it across to little Si to pick up the boat.  Meanwhile, little Si's troops race off down the left flank. 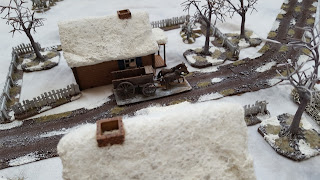 Some Little Si's troops, breaking cover out of the woods and heading for the next terrain feature.  These are actually my infantry and I think they work quite well with the paint job and basing. 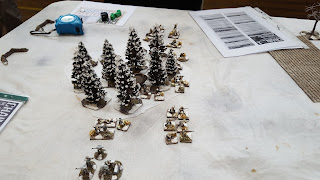 With the village searched, Will's infantry move through the centre, while my group heads towards the woods on the right.  The panzershreck team brings up the rear. 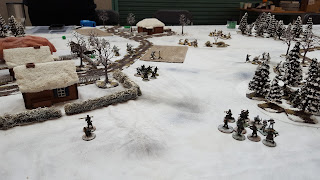 In the distance, my lead section spots movement in the distance, a platoon of Soviets enters the table from the flank and starts to spread out searching for German infiltrators. 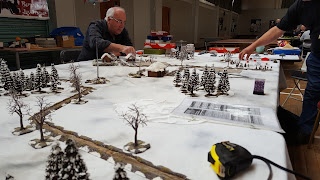 Little Si's infantry break cover heading for the next wood after searching the small hamlet on their flank. 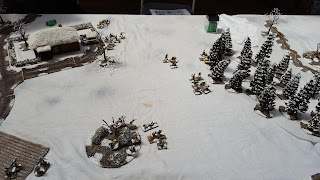 My infantry, two sections moving around both sides to the woods to approach the stream and the third section in the woods about to take up firing positions to overwatch the stream crossing. 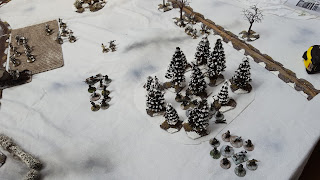 In the distance, the Reds seem to have moved across the open space and are sheltered behind the woods in the middle distance. 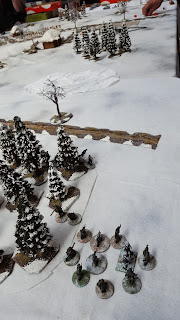 Lots of dice rolling going on as Will in the centre has the Russians in an intersecting field of fire.  His uncanny ability to throw double six as part of his command dice ensured that he had several attempts at shooting, which significantly degraded the Soviet blocking force.  The glee shown by Will on throwing double sixes out of 5 command dice, 4 times in a row, plus the joy of little Si shooting up another Soviet platoon on his flank were sights to behold and indeed rather noisy too. 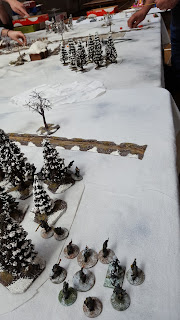 My infantry square up to the stream, while the section in the woods are on overwatch. 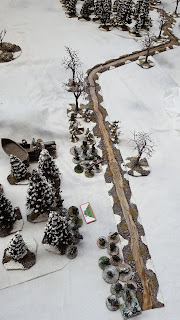 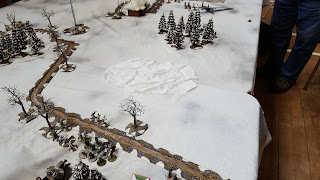 Next activation, a squad is across the stream, herded on my the platoon commander.  In the meanwhile, Gary's platoon has been shredded by Will and he is off, athough he gets another fresh platoon as immediate reinforcements. 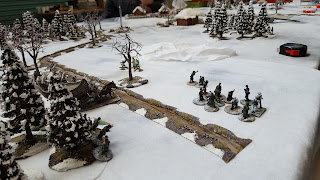 My second squad is across the stream and Will's cart has moved up ready to cross.  Next Russian activation, a squad of ski troops pops up in the hamlet rear left, with good views of Will's troops and the cart. 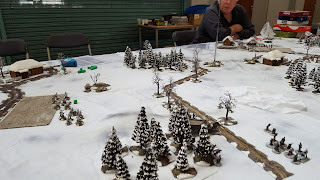 Gary got a T-26 tank as a reinforcement, which immediately started to rattle and belch exhaust fumes into the crisp air, heading towards my troops strung out between the stream and the next patch of woodland.  My gallant panzershreck team loosed off a round at it, needing a 7 to hit, plus 2 for long rnge, so a nine needed.  I closed my eyes and rolled 10, so a hit.  Now, I got 13 attack dice to Gary's 3 defence dice and I failed to get a single success, so the T-26 crew were deafened by a solid thud, but no kill.  He hosed me with his MGs (only one man in the turret, so he couldn't fire the main gun as well), putting a point of shock on my panzershreck team and an MG team.  My panzershreck team got their act together next activation and got another hit, this time though the round wasn't a dud and the tank exploded in a fireball. 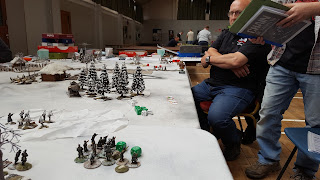 My infantry could see the accompanying infantry milling about in the distance, so fired putting shock and a kill on the infantry. 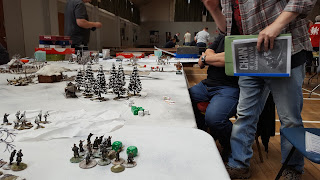 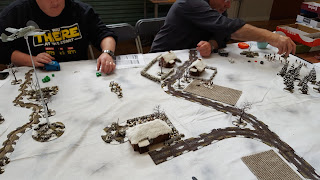 My lead section reaches the far edge of the next wood, ready to bring Gary's platoon under fire next activation. 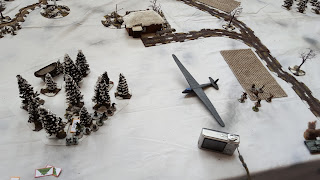 The rest of my squads follow up along with Wills squads at the top of the picture.  Wills troops are trying toput terrain between them and the Soviet sniper and squad which has appeared in our rear area. 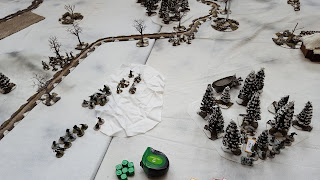 There followed a pretty intense firefight and close assault by little Si on the German left, which effectively wiped out  the Soviet platoon on that flank.  In the centre, Will took some casualties from the flank ski troops and sniper, including one of the 2 man crew of the cart.  Will and I caught Gary'splatoon in another crossfire, severely shocking them, while little Si finished off John's platoon before turning their guns on Gary's troops.  The Germans had fought their way across c.8ft of tabletop, which was quite good considering we were all learning the rules as we went along.  Chain of Command was positively viewed by us all and we'll definitely play a few more games to test things out more, but they could become one of my go to rule sets for skirmish gaming.  This is even more likely if the modern variant is anywhere near as good as the WW2 one.

Here's a general view of the hall, early in the morning as games are being set up. 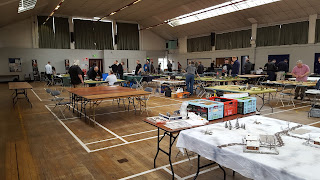 Ancients competition tables with some of the Flames or War tournament tables on the left. 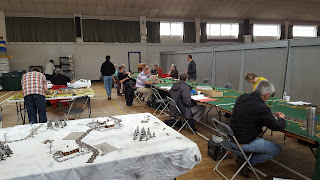 Flames of War tables and a big Kings of War game being set up. 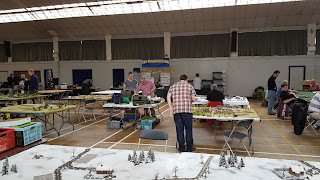 Great fun, thanks to Will for supplying the terrain and Richard C for organising the scenario.  Thanks to Pete, Len, Dennis, etc, for all the organising.  Thanks to you too for looking.
Posted by Andy Canham at 00:23