We played a game of Team Yankee on Thursday evening, pitting 200 points of Soviets against a similar points value of British and West Germans.  One of the Soviet players had no 6mm forces, so I made up a battlegroup from my collection, but realised I'd never got round to any fixed wing air assets.  So, I dug out a pair of Sukhoi Su-25 Frogfoots (Rooks) and gave them a paint job as recommended in the Team Yankee rule book, which seems to match contemporary images that I could find on the internet.

Although I've got loads of unpainted Soviet aircraft (most the fruits of a Gauntlet bring and buy purchase a couple of years back), the following pictures show the current extent of their readiness.

A pair of Mil Mi-24 Hinds (Flying Tanks), which I've already posted pictures of a while back. 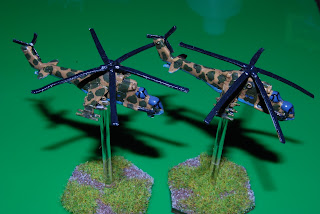 A pair of Mil Mi-8 Hips, again I've posted pics of these previously. 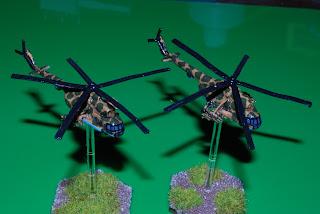 Then the pair of Sukhoi Su-25 Frogfoots (Ravens), complete with their hand painted red stars. 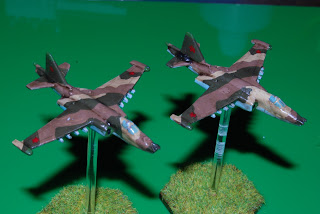 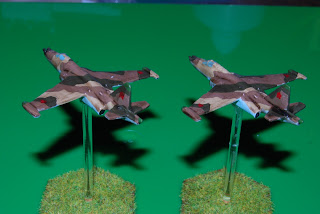 I need to add another pair to have the full flight functionality for Team Yankee.  In our game on Thursday, the Soviets took a flight of 2 Frogfoots and 6 Hinds.  The 2 Frogfoots were nuisance value as they came on individually and the West German air defences were able to deal with them.  The Hinds rampaged through the British armour as the Brits had left their air defences behind so relied on their AA MGs, but came a cropper against the West Germans.  The 6 strong Hind flight attempted a strike on an M109 battery in the West German rear, but this was in range of the 3 local defence AA .50 cals on the M109s, as well as 2 Roland batteries and a Gepard battery.  Scratch 5 Hinds for the loss of a single M109.  This seems to reflect a general vulnerability of the Hinds in Team Yankee, which belies the Flying Tank reputation, as soon as they come up against any serious AA assets.

Thanks for looking.
Posted by Andy Canham at 09:26 3 comments:

The local games club has a growing interest in Dead Man's Hand, so I picked up a copy of the rules and some minis to see what all the fuss was about.  At around £20 for the rules and a similar amount for three sets of figures, I thought why not, so headed out to the Wargamestore at Brimstage to pick some up.  And cowboys and Indians were amongst the first toys I played with, having inherited a massive set from my brother, sadly long gone now.  So, a full circle, so to speak.

First up, Cowboy Posse II (all figures are by North Star).  I wanted these to look a bit like the regulator posse from Pale Rider. 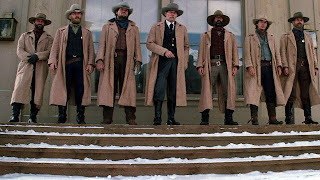 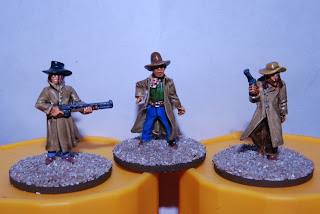 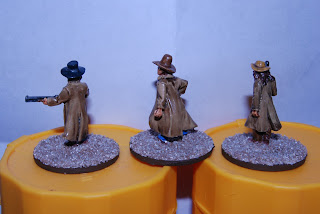 The we have Lawmen Type I.  The guy in the middle is painted like the regulators above, so he can join their gang.  The guy on the left wears a white hat and an old cavalry shirt, so he has to be a good guy (Randolph Scott or John Wayne). 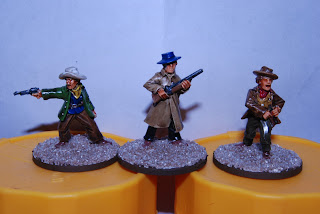 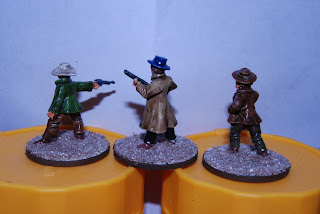 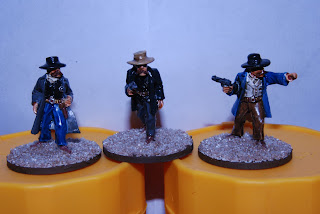 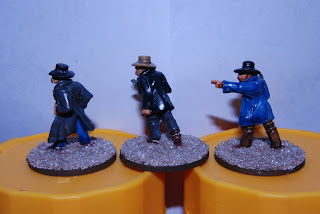 So, there we have it, three posses ready for the table.  The club has loads of Wild West scenery, so I'm all ready to go.  Now to try out the rules.

Thanks for looking.
Posted by Andy Canham at 08:49 No comments:

These are shots of Steve Black's (Corwin) Ratte and Dora, for posting on the Blitzkrieg Commander forum.  He's having problems posting pictures at the moment.  The Ratte has 2 each of comparatively lightly armoured E-100s and Maus for scale comparison.
﻿ 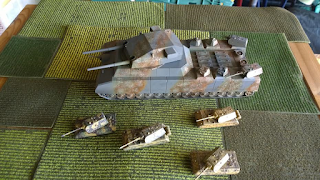 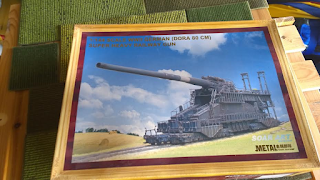 Thanks for looking.
Posted by Andy Canham at 20:31 2 comments:

Team Yankee seems to have captured the imagination of the Flames of War players at the club.  While most have built up 15mm forces for Russians and Americans, there has been a lot of interest in 6mm, based on cost, the ability to build larger and more varied forces and a better look to the game on the tabletop.  For me this is perfect, as I already have 6mm forces for US, Russian, British and French.  With the publication of the Team Yankee supplement Leopard, I decided to order enough vehicles from Heroics and Ros to build up a force - I can always add more later if I like them for use with CWC.  Infantry are from Mainforce.

I decided to paint these in olivegelb (yellow olive) rather than the later NATO three colour scheme.  Vallejo yellow olive wasn't grey enough for me, so I used it as a base coat, but dry brushed it mixed with mid-grey and then added a little white for a lighter dry brush.  Tracks are flat brown, tools are beige brown and flat aluminium, crosses are hand painted in black and white.  Vision blocks are azure blue.

So, without further ado, a Leopard 2 Panzer Zug. 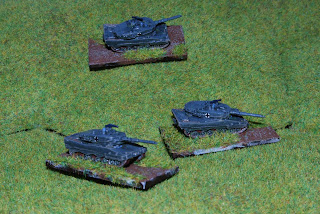 A Leopard 2 Panzer Kompanie.  I suspect these could ruin a Russian regimental attack on a good day. 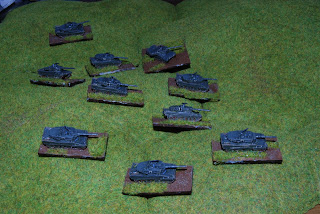 The panzergrenadier zug from the panzer kompanie, transported in three Marders, comprising two sections of infantry, each with Milan firing posts, and the command section. 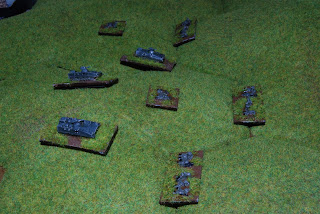 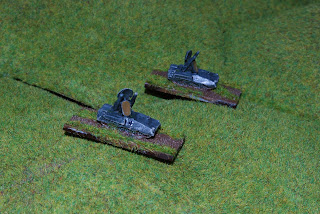 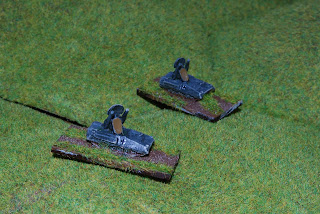 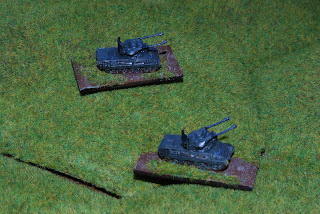 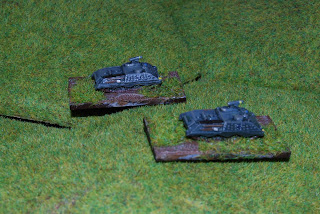 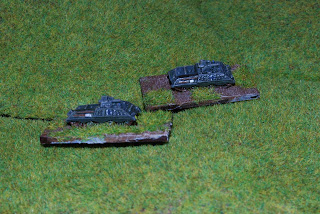 Not really represented in Leopard, a Leopard 1 ARV. 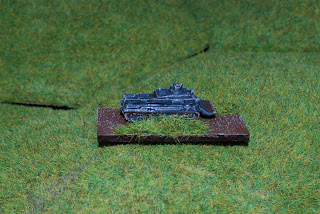 A Leopard 1 zug, from a panzeraufklarungs kompanie.  These are rather more brittle than the Leopard 2s, but cost significantly less point-wise, so you can have a lot more, and they pack a punch. 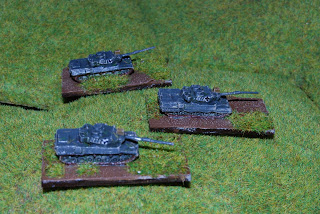 A LARS raketenwerfer battery, with OP in M113. 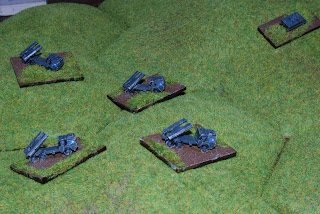 A fliegerfaust gruppe, armed with Redeye hand held SAM missiles.  The rules allow one stand for each weapon in a Gepard or Roland air defence battery.  Apparently these troops represent the two spare crews available for each battery to allow 3 8 hour shifts to cover 24 hour air defence. 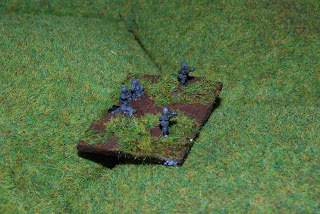 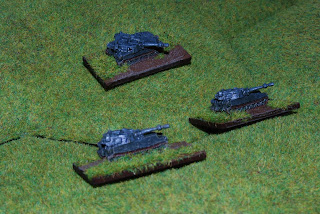 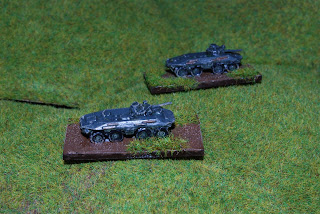 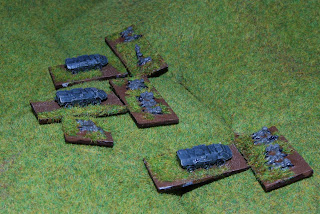 So, I now have enough vehicles and infantry to field a panzer kompanie, panzergrenadier kompanie and panzer aufklarungskompanie, plus supports.  I still need to add flights of West German Tornados and Bo-105P PAH helicopters to complete all the functionality of the Leopard forces.  I'm hoping to get some or all on the table top some time in the next few weeks.

As ever, thanks for looking.
Posted by Andy Canham at 23:27 4 comments: