Here is a pair of Ford Model T transports for British WW1 troops in the Middle East.  One crew in sola topees and the other in various side cap headgear.  The models are from Early War Miniatures and were surprisingly easy to put together making robust models, ideal for the wargames table.

The troops in topees man a pair of Lewis guns, one firing forward and the other to the rear.  The other vehicle has a single rear firing Lewis gun.  There are plenty of accessories supplied with each kit including batteries, fuel cans, spare tyres/inner tubes, rifles in holsters, picks and wooden cases, which give a nice "gypsy caravan" look to the vehicles. 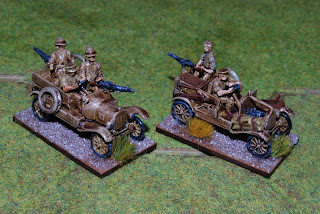 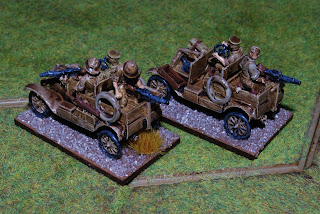 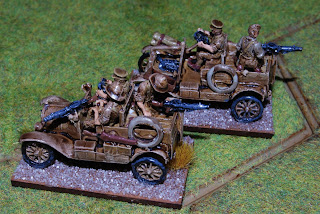 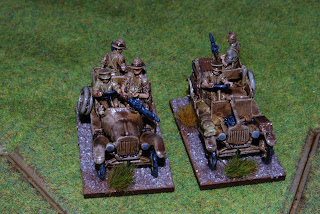 Nice models and will hopefully add some fun mobility on the table top.  These will make an appearance in WW1 scenarios for the Middle East, intervention forces in the RCW and, of course, Andreivia.

As ever, thanks for looking.
Posted by Andy Canham at 08:33 3 comments:

These last few days, I've been making an effort to finish off some of the Shellhole Scenics WW1 models that I picked up at Phalanx back in the summer.

This is the Shellhole Scenics resin and metal model of the WW1 Mark IV Austin armoured car.  It was relatively simple to build, although a set of instructions on their web site would have been tremendous.  It builds into a robust model which looks the part to me.  It has that satisfying "Heath-Robinson" feel for a lot of WW1 vehicles, especially with the twin MG turrets.

I painted this one in khaki grey, dry brushed Iraqi sand and ink washed in Army Painted strong tone. 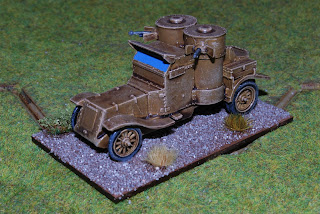 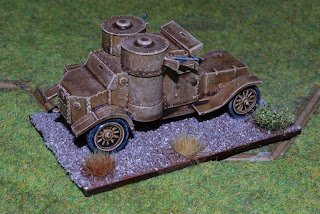 Shellhole Scenics  also make a rather nice model of the Whippet tank.  Again, this is a resin and white metal kit, but this one required quite a bit of internet research to work out where all the parts fitted.  I was also disappointed at the way the white metal tracks fitted to the resin hull as once glued, there is a weakness which allows the tracks to bow in at the base and can result in an unwary moment for the whole model to come apart in your hands.  I found that industrial strength superglue did the trick - I suspect I could throw it across the room and it wouldn't come apart, but I'm not going to try.

This model is also in khaki grey dry brushed Iraqi sand.  Rusted exhausts and tracks are shown in orange brown, while the tracks themselves are oily steel with light orange brown dry brushing. 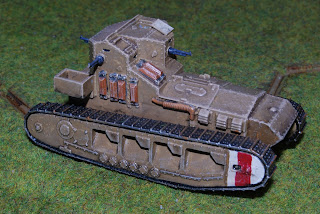 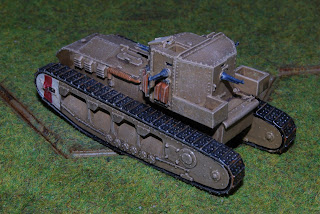 I'll look out for a suitable set of decals for vehicle numbers and I need a commander figure to put in the open hatch.  I have some batteries and water bottles spare from the Early War Miniatures Model T Fords that I'm working on and these will find their way into the external bins on the turret sides.

And finally, for this post, here is Shellhole Scenics version of the Garforth-Putilov armoured car.  This one is painted in bronze green, dry brushed Iraqi sand, washed with Agrax Earthshade and varnished.  This has an even more "Heath-Robinson" look to it. 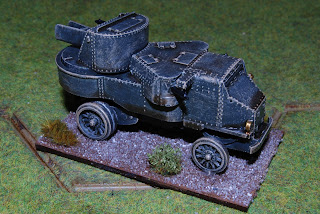 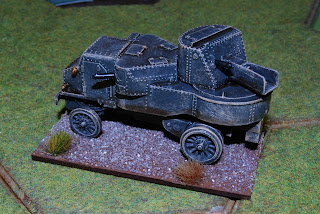 Shown with a passing Cossack to give an idea of scale. 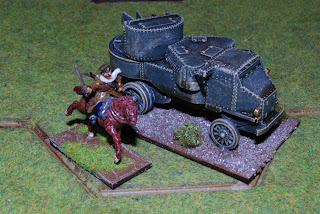 These models should work for late WW1 in the Middle East and for intervention forces in the Russian Civil War.  They will also provide some mobile support to the Empire Intervention Force in the Andreivian campaign next year.

As ever, thanks for looking.
Posted by Andy Canham at 23:12 4 comments:

The big push (excuse the pun) is one for WW1 figures and vehicles at the moment.  At the Derby/Castle Donnington show, I picked up a pack each of Shellhole Scenics Royal Naval Division infantry in helmets and hats.  Each set comprises a pack of 10 figures, one officer/petty officer with revolver, a two man Lewis gun team and seven riflemen, three advancing high port fixed bayonet, two advancing low port fixed bayonets and two attempting to fix bayonets while advancing.  The pack with tin hats also contained a bonus figure with bare head advancing at high port.

They were nice clean castings, which required very little pre-undercoat filing - there was a tiny amount of flash between the legs of two or three figures.  They were base coated in dark sea blue, khaki for gaiters and webbing/ammo packs and flat blue for scarf with white trim.  I was more impressed with the figures in tin helmets, but the figures in hats, although perfectly usable, appear to lack necks, with heads firmly growing from the shoulders, thus resembling Soltarans.  However, that isn't going to stop them making appearances on my table. 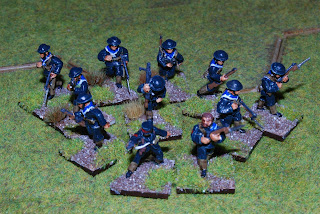 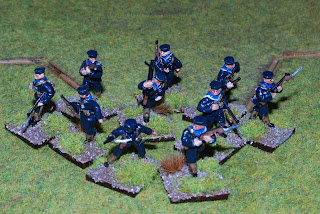 These look the part and will be used for naval landing parties in WW1 and RCW scenarios and I hope they will make an appearance as part of the Empire Intervention Force heading to Andreivia in March next year.

Then we have British infantry in tropical kit from HAT Industries.  These are useful for scenarios set in WW1 in the Middle East, but can also form intervention forces for the Russian Civil War.  These, with a handful of troops in tin hats interspersed, will form the core of an Andreivian intervention force sent either from India, Persia or Palestine - pictures on the net of British soldiers in Persia (as it was then) show them in topees, tin hats and field service caps, not that different from a generation later in WW2 (think "It Aint 'Alf Hot Mum"). 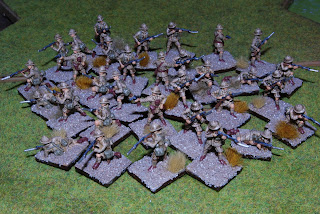 Then we have a 2.5" RML screw gun, crewed by Indian Army artillerymen (Sikhs I think give the turbans they are wearing). 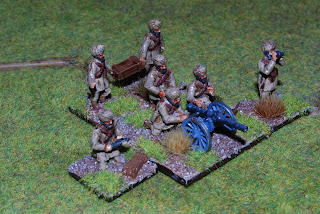 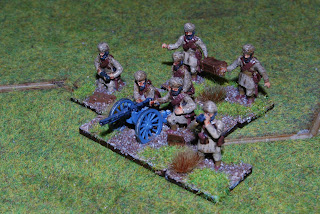 I'm having lots of fun researching WW1 uniforms and troops who would have potentially been available at the end of the Great War to form a larger intervention force in the Russian Civil War than was actually used in real life.  This has also led to me reading around the subject of the Russian Civil War itself, which I knew very little about before, and the collapse of the Ottoman Empire, which I knew nothing about.

Next up will be a couple of vehicles, which I've just about wrapped up, and then I'm working on the first batch of British infantry in tin helmets.  I was lucky enough to pick up a box of HAT Australian Light Horse and some Caesar Late WW1 Germans (?Czech Legion?), plus an Emhar MkIV female tank kit, so hope to get them going as well.

As ever, thanks for looking.
Posted by Andy Canham at 22:38 No comments:

These guys have been loitering on the workbench for a while now, just needing a final push to finish them off.  This is a set of Strelets WW1 Don Cossacks in winter dress - they are wearing hooded greatcoats.  Quite nice figures, not too much flash and they took to paint relatively well, after a cycle in the dishwasher. 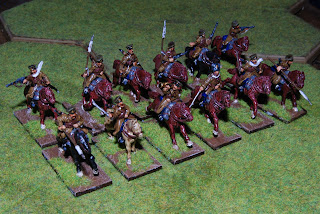 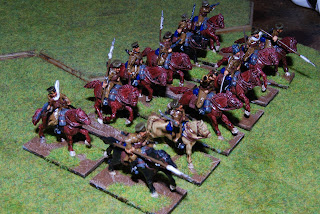 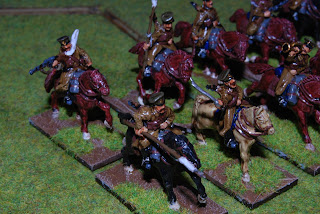 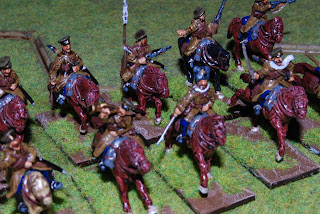 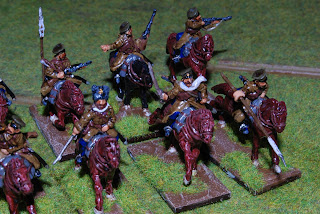 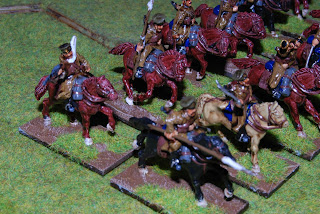 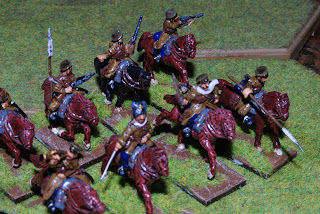 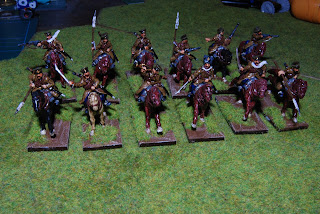 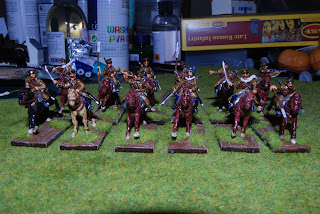 Apart from their use in WW1 scenarios, these guys will make an appearance in Russian Civil War games and also will be taking to the streets and hills of Andreivia for our game next April set against the backdrop of the Russian Civil War around 1919-20 in the fictional Black Sea country.

I recently picked up a box of Strelets Don Cossacks in Summer dress, so these too will hopefully make an appearance in Andreivia in the Spring.

As ever, thanks for looking.
Posted by Andy Canham at 21:52 No comments: