Just a quick post for now.  I've added a British 18lbr with 4 crew from Irregular Minitures to my British and Empire forces suitable for Palestine, Persia and Russian Civil War intervention forces. 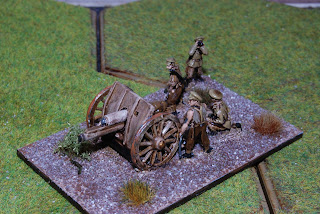 The crew is suitable for summer scenarios as well as arid climates, as they have discarded their tunics and are carrying out their warm work in shirt sleeves. 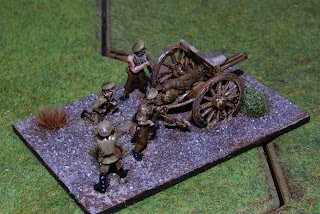 Thanks for looking.
Posted by Andy Canham at 16:30 No comments:

So, this week I have mostly been painting WW1 Russian infantry.  These are mainly from the HAT Russian infantry box, together with some officers, a machine gun and a couple of mortars from the HAT Russian Heavy Weapons pack.  They are painted in Russian Uniform, highlighted green grey, with black boots, khaki grey, London grey and blue grey greatcoat rolls, saddle brown for leather pouches and water bottles, oily steel for belt buckles and cap badges.

The whole platoon, four sections, each of 10 riflemen, an officer with runner and a senior officer with field telephone operator. 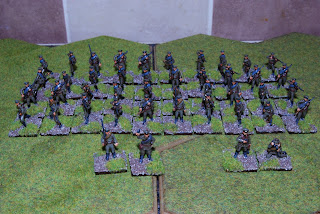 The officer, standing with pistol and runner in marching pose.  The officer is from the heavy weapons pack. 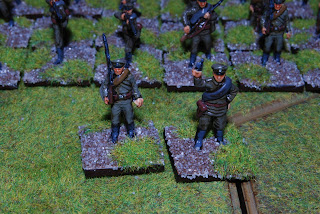 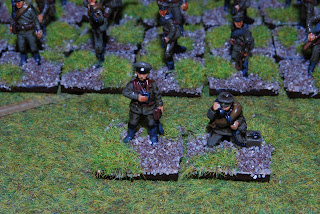 A selection of riflemen. 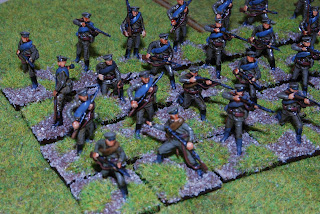 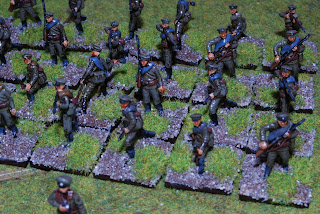 Heavy weapons (L-R) a Maxim MG, a Litonov 47mm mortar and a French 58mm motar, each with three crewmen. 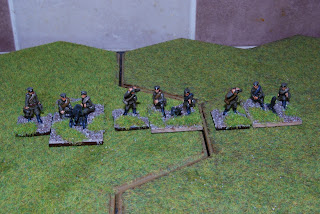 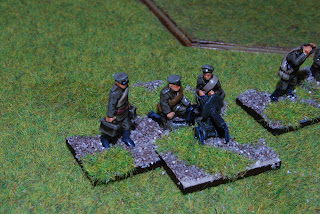 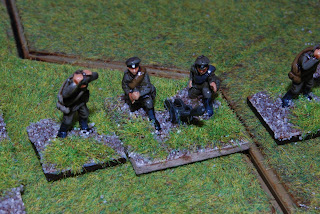 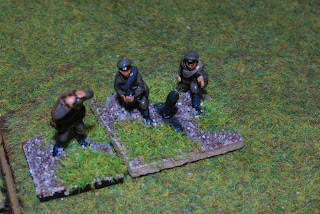 A selection of spare officers, telephone operators and spotters. 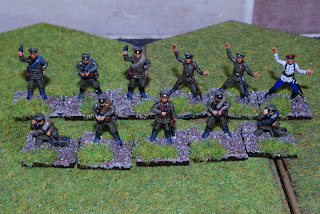 The colourful chap rear right is painted to look like one of the more colourful "White" Russian units, the Drozdovsky Regiment.  If I see another pack of figures, I'll add a platoon from the Drozdovsky or maybe the Kornilov Regiment, possibly a couple of sections from both. 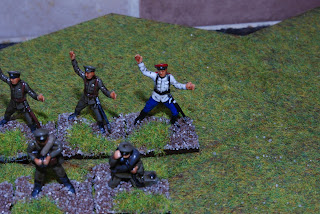 Some heavy artillery support, A 76mm field gun with 4 crew, from Irregular Miniatures. 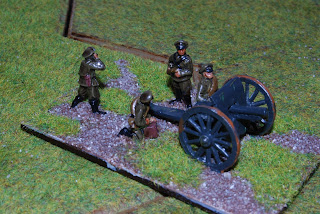 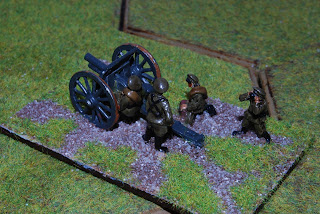 Another force suitable for Andreivia, alongside the Cossacks and the Garford-Putilov armoured car that I've posted on earlier.

As ever, thanks for looking.
Posted by Andy Canham at 16:23 No comments:

Well, it's Remembrance Sunday here in the U.K., so fairly appropriate to post some pictures of the latest additions to my collection, some WW1 British/Commonwealth infantry for the Western Front.  These guys are mainly HAT WW1 Canadians, generally good figures, no flash, but not a lot of detail in the faces and fine for British, Canadian and other Commonwealth/Empire troops.

I went with English Uniform for the err ..... uniform, khaki grey for the puttees, NATO black for boots and weapons, brown beige for rifle stocks, Citadel Ogryn Camo for belts, webbing, gas mask cases, cartridge cases and packs, Russian uniform for helmets.  All are washed with Agrax Earthshade, then flat flesh for faces and hands, washed with Reikland flesh wash.

First up, the whole platoon.  The platoon commander at the front with batman/runner and sniper, then 4 10 man sections, two with Lewis light machine guns and two with grenadiers, so two LMG sections and two bomber sections.  At the back are a couple of spare officers, snipers and a spare Lewis gun team. 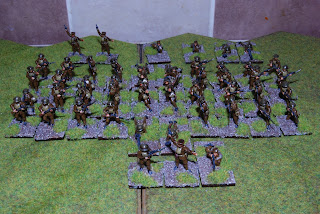 The platoon commander, runner and sniper. 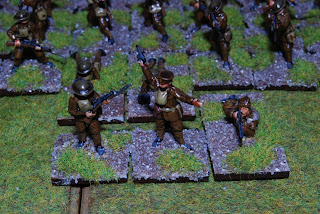 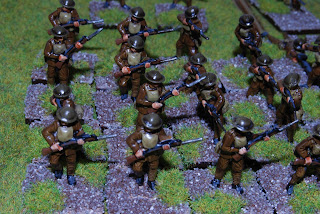 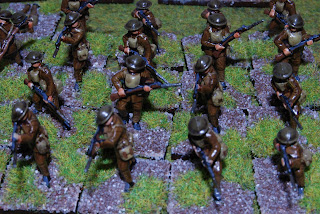 Bombers in the centre. 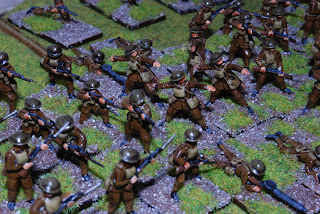 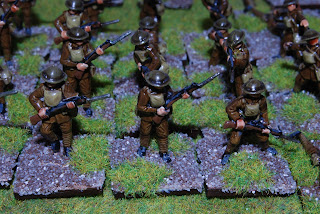 Then we have, at the back, half a platoon of mortars and, in front, half a platoon of Vickers machine guns.  The mortars have a command team of officer and telephone operator, surprisingly identical to the spotter team in the front row.  In the middle is an officer standing brandishing a pistol plus two crouching officers, also with pistols. 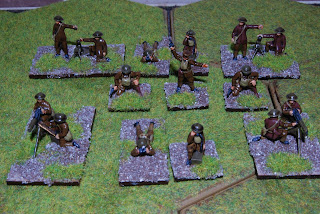 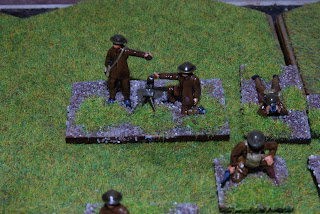 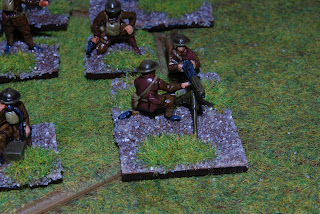 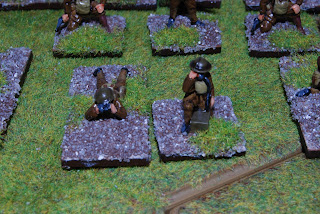 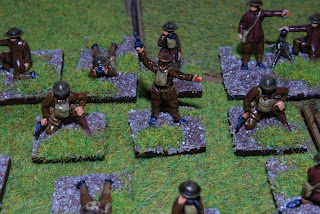 These figures are quite appropriate for 1916 onwards and so are also suitable for my intervention force in the Andreivian Civil War for 1918.

They are dressed as all four of my son's great grandfathers would have been, all of whom survived the war more or less intact, as well as a fair few of their brothers, including Private Francis Victor Harding of the Royal West Kent Regiment and Private Robert McNeil of the Cheshire Regiment, neither of whom survived the war and are both buried in Flanders.

As ever, thanks for looking.
Posted by Andy Canham at 14:25 4 comments:

Just a quick post just now as a busy weekend awaits.  These are some armed civilians from Irregular Miniatures A Very British Civil War range, but I figure they will do for any early 20th Century setting from 1900 to the 1950's.  While distinctly British in appearance overall, they will also pass muster for most Europeans, Colonial and North American settings. 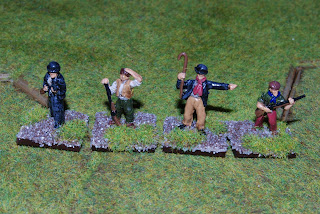 Then we have a spiffing gent in top hat carrying pistol, youth carrying a standard (got to decide on a suitable flag), chap in shirt sleeves with Lewis gun and a lady brandishing a rifle. 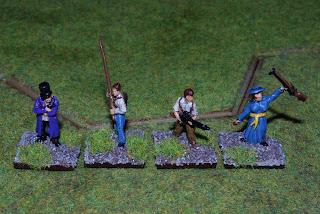 Not the most detailed figures but they seem to paint up OK.  In the second picture, the figure in lilac coat and top hat is a shoe-in for an eccentric Russian Civil War commander, with his trusty standard bearer and female companion.  In the first picture, the guy with Tommy gun could be a city gent or even Churchill in a Sealion setting.  The other figures would make great rustic or workers revolutionary fighters, with lots of mix and match between them.  Not sure on the rest of the range with Boy Scouts, Fox Hunters, Cricketers etc., being a little too British in appearance.

These figures will form some local militia forces for our Andreivia setting and eccentric commanders for "White Russian" or other anti-Bolshevik militias.

Thanks for looking.
Posted by Andy Canham at 08:59 2 comments: