Last Thursday Ian, Will and I played out a couple of games of Black Ops.  We used the ideas from Winter of 79 as a starting point for an SAS raid on Border Farm, on the outskirts of Pont-y-Pandy.  The town was held by the British Army and the SAS mission was to investigate reports of armed Welsh separatists in the vicinity.


The SAS numbered 6 figures a leader (Ace), 2 man sniper team (King), and 3 troopers (Jacks), one a medic and one an RTO.  The Welsh Separatist fanatics included a Big boss and local cell leader (Aces), GPMG and Charlie G figures (Kings), 2 big boss bodyguards and a demolitions expert with large IED (Queens) and 15 terrorists (Jacks).  One third of the Welsh forces were awake and patrolling the farm.  The SAS could call up a British infantry section from the town with a Humber Pig, Saxon APC and Landy ambulance, plus an infantry section, leader and medic.  The Welsh were waiting on some additional muscle in the shape of a contingent of coal miners from the valleys, so they could mount an attack on Pant-y-Pandy.


The first run through saw Will's SAS approach close enough to toss hand grenades into the farm buildings and gun down any defenders outside the buildings, tearing into Ian's Welsh and breaking them.  The survivors slinked away as best they could under cover of darkness.


In the second run through, Ian's SAS had much less luck, with one of their troopers being stumbled upon by a sentry, who proved remarkably resilient in the ensuing fisticuffs and raising enough noise to ensure several other figures became embroiled, waking Will's Welsh garrison.  The Welsh kept up a steady GPMG fire on the SAS sniper team, gradually whittling them and the surviving troopers down to the point where the SAS leader called up the British Army reserves.  These guys piled out of the town towards the farm, only for the Pig to be shot up with Charlie G fire and the Saxon and dismounts to be caught by the IED detonation.  By this point, the Welsh figured they had done enough and retired from the farm through the woods.  No doubt they would be trying to get a message through to the contingent of coal miners to abandon the rendezvous, thereby buying the British garrison of Pont-y-Pandy some time. 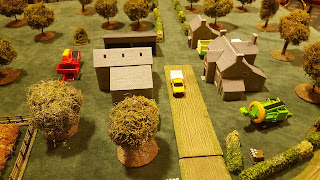 British security checkpoint outside the town manned by police and MPs. 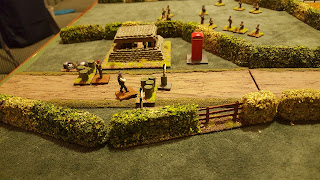 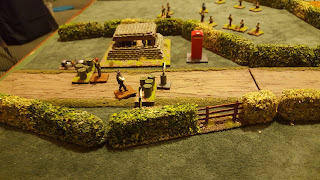 The British Army relief column passing through the check point. 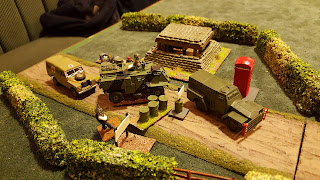 The scene of the ambush. 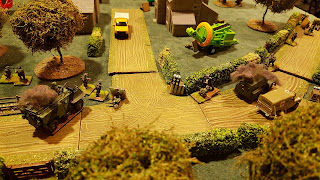 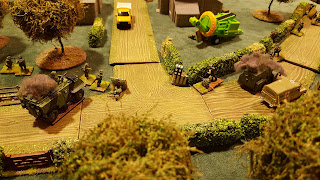 The surviving SAS and British Army take possession of the farm, but the Will-o-the-Wisp Welshmen have scarpered leaving only the dead, who somewhat obviously tell no tales. 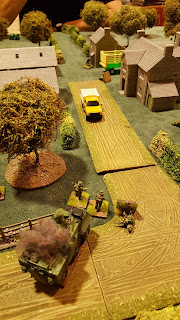 These were fun games - the rules need a little bit of modification from the RAW as the nuances of dealing with IEDs and such are not fully explained.  However, it did give an exciting game and looked pretty cool on the table.

Email ThisBlogThis!Share to TwitterShare to FacebookShare to Pinterest
Labels: 20mm, modern, Winter of 79

Last Thursday at the club, we played a game using Will McNally's most excellent 20mm WW2 collection.  Will based the scenario on the Barce raid from the first Rapid Fire book.  Ian and I were the plucky Empire troops, Ian took the Guards patrol plus one of the command team jeeps, while I took the |New Zealand troop plus the other command jeep.

My patrol stealthily moved across the table from the road entry point towards the airfield perimeter crash gate and was somewhat bemused to find Ian charging ahead with the Guards at top speed down the main road.  The following turn, an alert Italian sentry dropped his Salami and hit the alarm klaxon, rousing the garrison.  I diverted the command jeep to take up an overwatch position on some hills overlooking the village and Italian HQ, while Ian shot up the village.  The Kiwi troop headed for the crash gates at full speed.  The Italians poured out of the barracks and headed for Ian's patrol, mostly ignoring the airfield.  This triggered a long slugging match between Ian and Phil's Italians, resulting in a lot of Italian infantry casualties but also the loss of most of the Guards transports.

The Kiwis headed for the gates, shooting at Italian sections in defences by the gate and in the control tower, as well as a dug in MMG and an MMG firing from the village (which the command jeep on the hill dealt with.  Mike's Italians were eventually overwhelmed, but at a cost of 1 jeep and the two Chevrolets.  My demolition team made it to the first aircraft and set their charge, lit the blue touch paper and retired.  Kaboom and the first Italian aircraft disintegrated in a ball of fire!  The nearest Italian infantry section was trudging towards the explosion, covered by the guns of my remaining jeep.  We agreed at this point that the LRDG patrols had achieved their objectives, virtually wiping out the Italian garrison (all bar some tankettes which were proving very troubling).  My surviving troopers would all fit in the command jeep and last patrol jeep, while the Guards patrol would have to retire on foot to the rendezvous.

We played the game using Battlegroup rules and agreed that the softskins were a little too vulnerable, being easy to spot, hit and with no save, knock out.  Next time, we'll experiment with making moving vehicles even harder to hit in this type of scenario, representing fast moving, unlit vehicles at night proving hard to hit.

Some random pictures of the game below, taken at the end. 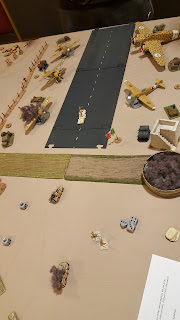 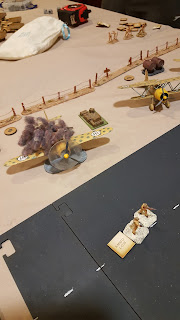 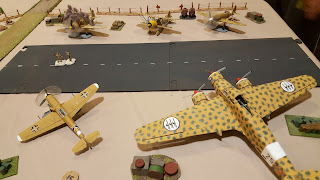 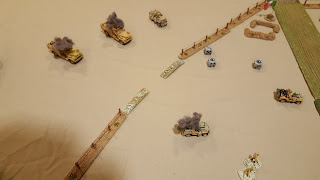 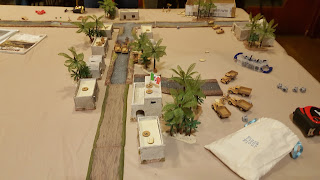 Thanks for looking.
Posted by Andy Canham at 08:34 No comments:

This Saturday, a small group of the Cold War Commanders met at the Deeside Defenders Club in Broughton near Chester.  We had planned to fight a NATO counterattack around the Danish towns of Kropp and Owschlag.  Andy T fielded a West German panzergrenadier force, while Mike opted for a British mechanised force.  I kept to my Polish marine infantry, this time minus their transports, while Ian opted for a Soviet Motorized Rifle Brigade in MTLBs.  We each took around 7000 points or so.  I started the game with three marine infantry battalions on table with hasty defences, which left me with an improved T-55 battalion in reserve and Ian with a battalion of improved T-55s, plus three regiments of infantry in MTLBs.  NATO brought all their gear on on the first turn using mobile deployment.

I allocated Ian one of the Polish infantry batts to his left flank and he deployed them along the highway west of, and woods south of Kropp.  I deployed an infantry battalion in the woods southeast and east of Kropp and in the ruins of Owschlag.  The Warpact used mines to close the open spaces west of Kropp, and west and north east of Owschlag, covered by fire from T-12s and AT-4s.  Dug in infantry with RPG-7s covered the various minefields.  Soviet and Warpact reserves were diced for per battalion, needing a 6 on turn 1, 5+ on turn 2, 4+ on turn 3 and so on. 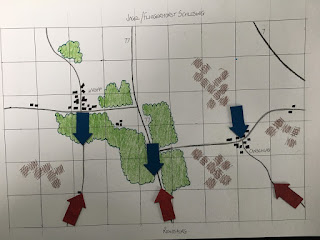 This account covers the eastern flank, where I was facing Mike and part of Andy T's forces.  Andy T's account of the western flank in more detail can be found here; http://neilsgaming.pbworks.com/w/page/121447956/Landjut%202017%3A%20Second%20Battle%20of%20Kropp-Owschlag .  The first turn saw Mike advancing on the Warpact left, rather reluctantly, with one command failing command from the HQ and CO.  His scouts were active, but one Scimitar was brewed up by concealed T-12 fire east out of Owschlag.  In Mike's 2nd turn, he used scouts to reveal two of my infantry units in Owschlag, targeting them with some ineffective long range canon fire from the Chieftains and single squadron of Challengers that he was allowed.  His Phantom air strike ended in disaster, as it flew into a hail of SA-7 and close-in air defence fire from my local HQs.  Strike one Phantom. 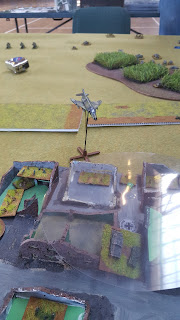 The NATO advance failed to concentrate.  One mechanised battalion occupied the fields (on right) and shot up Owschlag along with raining artillery barrages, with limited kills, although a few suppressions. 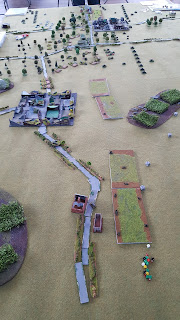 A second mechanised battalion strung out in line used the field systems to shield themselves from Owschlag and the woods to the west, fearin g the AT-4s covering that line of approach. 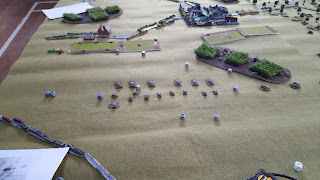 The mixed Chieftain and Challenger mechanised battalion, which made it onto the table.  Andy T's Leo 1s and Marders can be seen in the distance closing in on the woods northeast of Kropp. 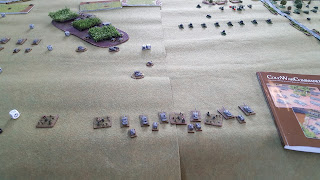 These same Leo 1s and the last sighting of the Marder companies.  The plan seemed to be to suppress the dug in Poles with Leo 1 fire and then close assault with the Marders and their infantry.  Unfortunately, suppressions were in short supply and the Marders suffered almost 50% losses to RPG-7 fire.  Their infantry debussed, but then ran out of orders.  In the following Warpact turn, infantry and HMG fire KO'd or suppressed all the dismounts. 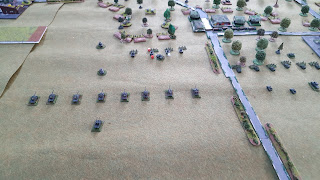 On the right, Leo 1s and Marders show appropriate elan in charging the Poles. 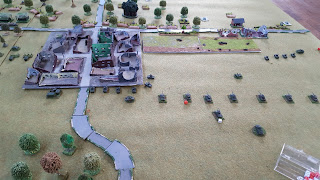 In an astonishing display of European co-operation (pre-Brexit), Mike called in an airstrike in support of Andy T's Marders, which deviated onto the Marders instead.  Polish troops cheered in their trenches as more West German Marders burned and were suppressed (this was the most damaging British air attack of the day). 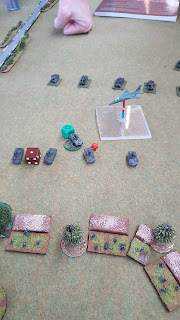 Turn 4 saw the Soviet MR battalion assigned to my sector arrive and I pushed them forward towards the fields on my far right.  By turn 5, the MR batt occupied the fields, but remained buttoned up due to the threat of artillery.  Meanwhile, the Polish T-55 battalion was also on and moving up east of Owschlag to trade shots with Mikes Chieftains. 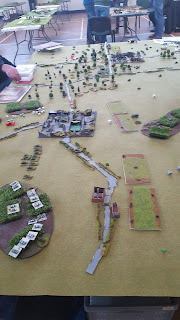 The T-55s did manage a blunder, which cost them one troop of tanks. 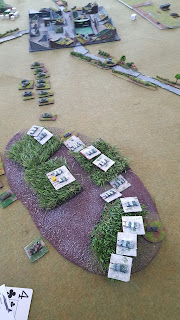 In the following turn, long range BRDM-3 fire, T-55 canon fire and T-12 fire (including a double order (double 1) despatched a company of Chieftains by concentrating fire on one troop at a time, overwhelming their armour. 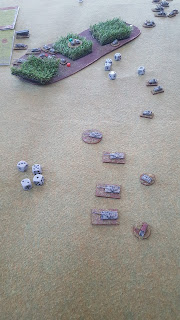 Artillery strikes were also quite effective in suppressing the British mechanised battalion attempting to breach the mines north of Owschlag, although the mine clearing engineers lead a charmed life. 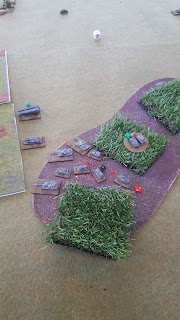 By this time, the Soviets on the left had pushed their mechanised units into Kropp and had tanks and infantry pushing forwards having pushed the West Germans past their breakpoint.  This drove Mike to reconsider his advance and pull back, thereby ending the game, with the Soviets and Poles claiming a victory.
This was a fun game, played in a really good spirit.  Lots of action.  Thanks to Andy T (who suggested the game and came up with the scenario), Mike and Ian for a great way to spend a Saturday.  Thanks to Richard P for the map.
Thanks for looking.﻿
﻿
Posted by Andy Canham at 21:40 6 comments: