Well, it turned out to be an interesting game last night.  Playing US infantry task force vs German Panzer Division kamfgruppe.  Germans went with heavy armour - 3 Panthers, a Jagdpanther and a Tiger 1, plus a Puma and sniper recce and an infantry platoon and off board 120mm mortars.  US went with 2 Sherman platoons, each including a single 76mm version, one M10, an infantry platoon, recce in the form of an M20, jeep recce team and two snipers.  Crucially, the US also took two on board 105mm guns and an offboard medium mortar battery.  German BP 30, US BP 42, US tanks were weak and pitted against German behemoths, but the German force was brittle - who would hold out.

The battlefield was laid out as below and the scenario was flank attack.  German random deployment was top left, so US took the lower right and opted for their recce to come on lower left, leaving German recce top right.  German deployment only allowed a single main force unit (a Jagdpanther) and the two recce.  US troops got 3 mainforce units, a 105mm howitzer, spotter team and M10 tank destroyer, as well as their 4 recce units.  Germans were outscouted, so took a chit and there were 4 on table objectives at the crossroads, one of the village buildings on the left, the left side of the woods left of the village and left side of the woods in the foreground. 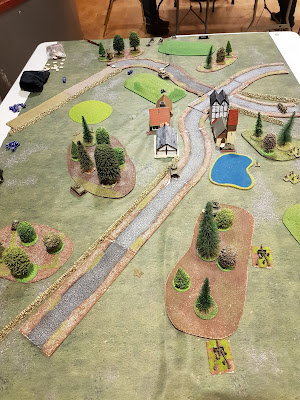 The M10 quickly took up overwatch in the woods lower right, covering the road and village while the observer team pushed down the right flank.  Recce pushed down the left, using available cover, with a sniper rushing across the road to join the M10 and eventually try and enter the village.  Crucially, my 105mm fired on a programmed target, right in front of the Jagdpanther.  A lucky 6, followed by a double figure score on 2d6 scratched the Jagdpanther (see below).  Suddenly, things were looking better for the Americans.  Jerry pushed his Puma forward to the crossroads and sniper forward towards the village.

The Americans just about won the race for reinforcements, but only just.  Jerry pushed forward with his Tiger 1, but couldn't advance out of the beaten zone of the programmed artillery point.  Repeated 105mm strikes pinned it turn after turn, soaking up chits each turn for the German to unpin.  In the meanwhile, the US Shermans quickly dealt with the Puma, and offtable mortar fire slowed the German infantry, causing casualties on the way.  Crucially, the German Panthers, once they turned up, were able to advance without serious trouble, down the centre and into the US right flank, and once a hit was scored, that was it for the Shermans. 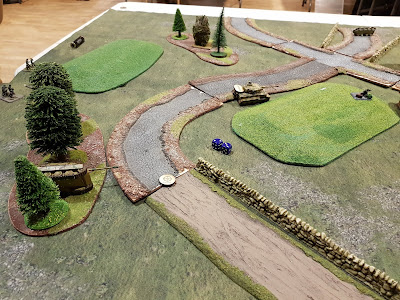 US infantry cautiously advance into the woods, attempting to infiltrate the edge of the village. 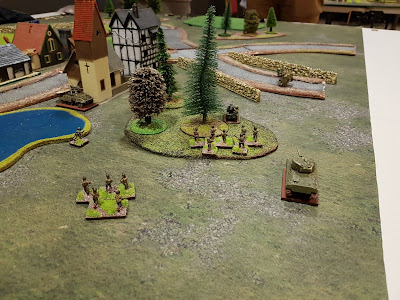 US 105mm howitzers, hoping for lucky KOs on the German armour.  Alas, after the Jagdpanther, the other German tanks led a charmed life. 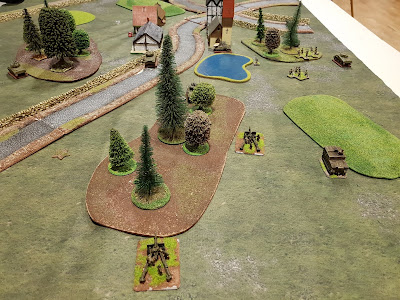 We had to close the game at the end of the evening just short of a conclusion.  The Americans had just 2 Shermans running and were losing the attrition with the Germans.  However, the US artillery, especially mortars which were specifically targeting the German infantry, were whittling them down and the Americans still held three of the four objectives.  When we totted up the chits, the Germans were on 29 and just one short of their BP of 30, whereas the US were on 19 out of 42.  So, somewhat bloody, but likely to be a reasonably comfortable win for the Americans.  The Detroit factories would have to run some overtime to replace the lost armour (well, perhaps release some from the massive stockpiles) and levy the surviving crew members with some replacement personnel and some replacements drafted into the infantry as well, having lost an entire section to Panther MG fire, but the units would soon be back in the fight.  Meanwhile, Jerry had lost a powerful tank destroyer and quite a few irreplaceable infantry and gun crews, as well as the tactical loss of the village.

All in all a fun game - I've decided I like the American firepower, although I'm less impressed with the performance of their Shermans - at least a Firefly or Achilles means the Germans have to be more canny about how they push forwards.

As ever, thanks for looking.
Posted by Andy Canham at 09:47 4 comments:

15mm US Shermans and tank destroyers

Getting ready for a 700 point Wacht am Rhine game tonight, so dusted off these models that I finished over the summer, but never got around to photographing.

Two troops of three 76mm Shermans - all from Battlefront I think. 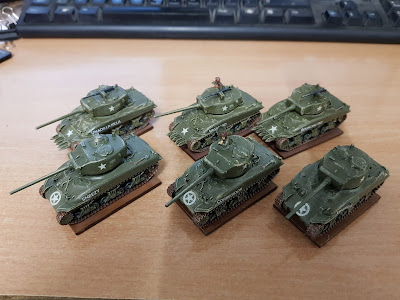 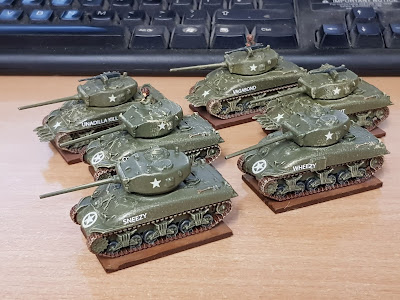 A troop/battery of M10s.  Cheap, gun no better than a regular Sherman and open topped, so no match for German armour in a stand up fight and really vulnerable to artillery.  Did I mention they were cheap though. 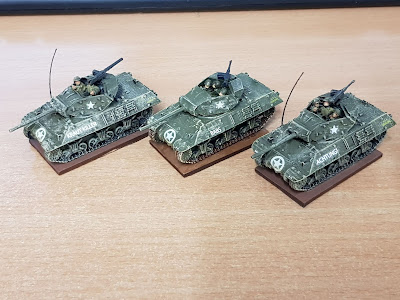 Two of these were from the Battlefront tank destroyer box set, which came with 2 jeeps and an M20. 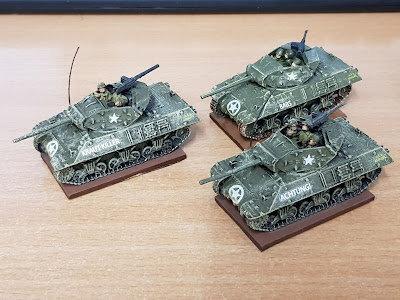 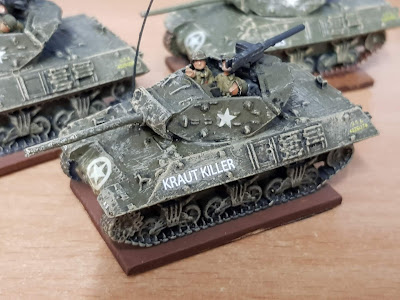 An M18 Hellcat.  Cheap, open topped and still not much better gun than a Sherman - again, not much use in a stand up fight. 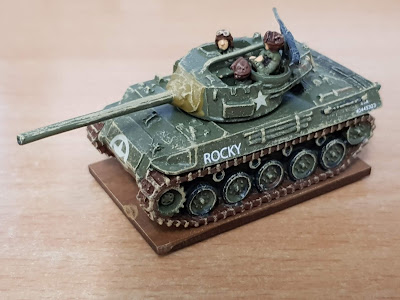 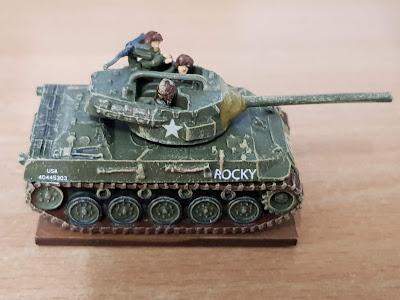 An M36 Jackson - 90mm gun so at least a bit more oomph.  Still open topped and again not much good in a stand up fight. 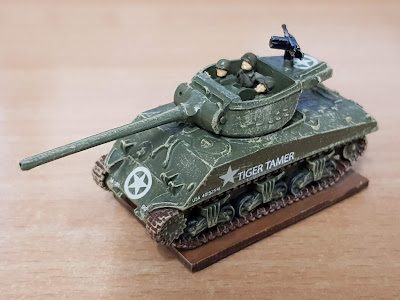 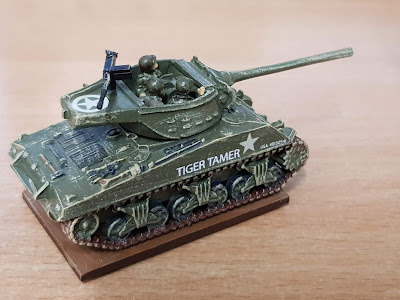 M20 utility car with .50 cal.  Just realised - this one needs some decals. 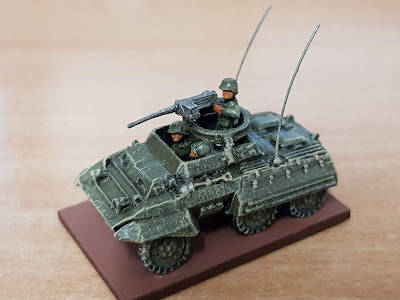 Back these up with some on table 105s with a spotter team and pre-reg target, off table 3" mortars and a platoon of infantry and they should be able to put out some fire power.  Even 105mm howitzers can give a Kingtiger a bad day with a killing hit and a good dice roll.  Probably needed as I'm up against Tiger Phil tonight!!!!
Posted by Andy Canham at 15:13 2 comments: