Something of a pleasant distraction

I lost the painting mojo before Christmas and was quite wrapped up with getting some games in at the club, including a big Saturday gaming day, as well as attending the Recon show in Pudsey, Leeds.  Having seen the output from my chum Will McNally's 3D printer, I decided to take the plunge and rather than asking for models this Christmas, I asked my wife for a 3D printer.  She managed to get me an Elegoo Mars 2 during one of the periodic/episodic Amazon price reductions, plus a bottle of grey resin.

Christmas morning, I opened the box, read the instruction manual and carefully placed everything to one side until I'd picked up some isopropyl alcohol and borrowed a uv resin curer from work.  This weekend I was ready.  Friday afternoon we set up the machine - looks more complicated than it turned out to be, 1/3rd filled the tank with resin and loaded Chitubox (or whatever its called) on the PC.  I'd already farmed various sites for stl files, mainly M Bergman and Tigerace1945, both of which produce some seriously useful files.

I then started producing 15mm armour, faster than the tractor factories of Chelyabinsk.  We have played a lot of Battlegroup Northag at the club recently, which encourages whole companies of T-62s and T-64s to be deployed.  I started out with a test T-64B hull and turret, which came out very nicely using the stl file and autoplatform and supports using Chitubox's default settings.  Sadly, I forgot to print the little MG cupola, so finished up batch printing a few of them.  Full of confidence, I then sliced two hulls and turrets, printing them in pairs, which also worked well. 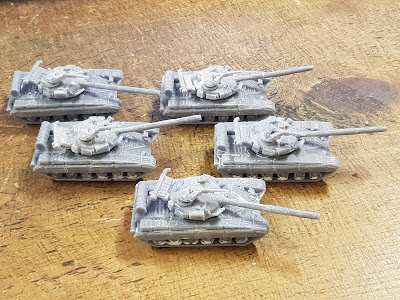 That gave me a troop of T-64Bs in 15mm scale, so I got to work on a platoon of BMP-1s for infantry support.  Hull and turret, these were formatted for two of each on each print run. 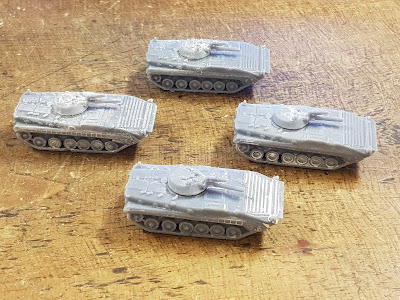 I then experimented with a few WW2 models in 15mm, an early or mid-war Dorchester ACV, an SdKfz 9 Famo recovery vehicle, an armoured jeep and a Pz-35t.  Still some clean up of the supports needed on the Dorchester wheels. 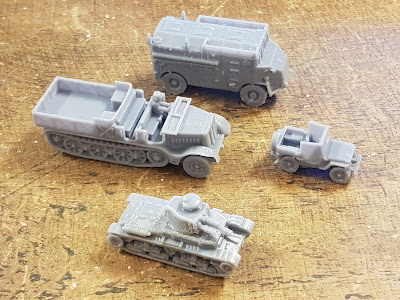 These French Somuas were upscaled to 1/72 from 1/100 using an online scale conversion that I found on Google and seem to have worked out well.  Another two part model, hull and turrets. 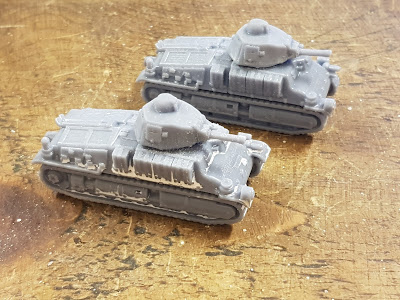 Finally, for now, I decided to try out the 3D Breed WW2 infantry and bought their set of winter British and Commonwealth infantry.  Each set comes with 15mm and 28mm figures with supports already added, as well as a set of 28mm figures without supports.  I found that I preferred cleaning up the figures when I'd allowed Chitubox to add supports, rather than those that came with the figures.  Below is the HQ set at the back (officer, kneeling RTO, and medic), back left is the spotter for a Bren gunner (sadly the bren gun snapped and I couldn't repair it, so he will be part of a mortar/artillery spotter team).  In front is a sniper team and PIAT team. 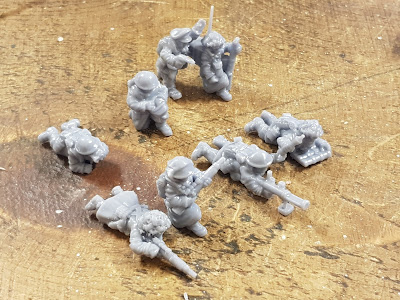 So, what did I learn?

Setting up the printer was a lot simpler than it appeared.

Don't overfill the resin tank, the plate drops into it when the printing starts and if over a third or so full, the resin can spill over the edges of the tank.

If the resin runs low during a print, there is a pause option, the model rises out of the resin and there is space to top up with some additional resin, but don't overdo it - see point above.

Cleaning up is hard in a domestic environment when you're spraying isopropyl alcohol everywhere, when the civil power comes in and says "what's that smell?".

Freeing the models from the base and supports is a combination of skilled snipping and brute force ripping, best done before the models have time to fully harden off.

Models need to be well washed, so water soluble resin is more practical.

As the uv source can access the whole of the print bed, there is no difference in print times between printing one model per run and multiple models - as many as can fit on the bed.

When adding multiple models on the bed, it is better to allow enough separation for the supports, so that each model is separate - if they are too close, they print as one large piece of plastic, which means more work to clean up.

All snipping off of supports is best done before hardening, as the resin becomes quite brittle and can easily snap in the wrong places.

Bergman's model tanks are lovely, but you either have to slightly reduce the turret size before printing or file them down, which is what I did, but filing releases resin dust, which I wouldn't want to encourage without suitable protection.

I intend to minimise the amount of clean up, especially of the resin tray and its thin clear plastic film base, by planning batches of printing to make use of rainy weekends and bank holidays.  Resin can be left in the tank for short periods, but the longer it is left, the more likely it is that the resin will start to cure on the liquid, or even worse, adhere to the thin film on the base of the tank.

Thanks to all those kind souls who have shared really cool stl files for such a wide range of things, many of which aren't made by commercial manufacturers.  If anyone has a link to an Achilles SPAT stl file, that is one that I couldn't track down over the last few weeks.

As ever, thanks for looking and a belated happy new year.