I was at a loose end in Chester today while my lad was enjoying a 3d virtual reality experience as part of his birthday gifts (belated from last month so his school mates could come along).  So, with an hour to myself, the obvious hang outs were Waterstones and Chester Model Centre.  While in the model shop, I noticed they had the relatively new Zvezda Stuka zu Fuss, so thought I'd pick one up to see how it looks.  I've never really thought about using rocket artillery in games, lots of punch, but long load times and wildly inaccurate. 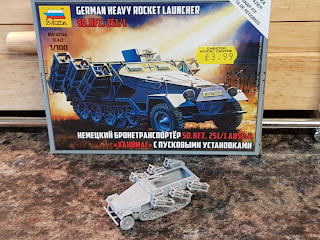 So, having got home, I assembled it in about 10 minutes, the body taking just a couple of minutes, but the rocket launchers taking up the rest of the time - quite fiddly consisting of the rocket and two halves for each launcher.  The whole lot snaps together quite robustly, with no need for glue. 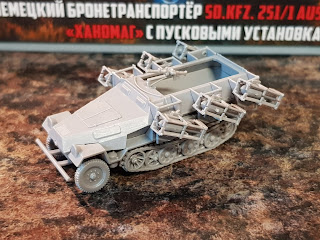 Quite a good looking model once assembled, so another vehicle to add to the assembled, but unpainted, stash.  Thanks for looking.
Posted by Andy Canham at 18:49 2 comments:

After a bit of a summer break - one with very little sunshine this year, unfortunately - it's back to the painting table.  I had a box of Battlefront Panthers some time ago and assembled two of them as Jagdpanthers.  Recently, I converted the spare turrets into Pantherturms.  I'd always intended to use the three remaining kits as winter Panthers, as I have plenty of regular version.  I also found a free to download 3d model of the Jagdpanther, so decided to have a go at 3d printing using the new 3d printer at our company - I won't mention the source of the file as I don't think my printing abilities come close to doing it justice.

I painted these as normal and then winterised them with some snow made from PVA glue, Vallejo off-white and baking soda mixed into a damp paste and liberally daubed over the models.  Applied as a paste it looks quite good as snow and with more dry brushing it resembles frost, especially as the baking soda starts to crystallise as it dries.  The Jagdpanther also had a dilute wash of off-white before the snow effect was added to simulate whitewash. 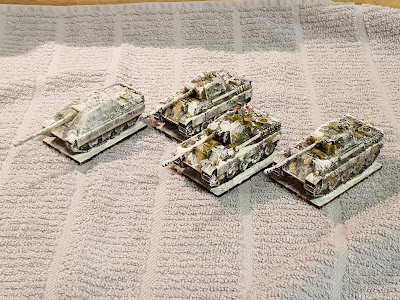 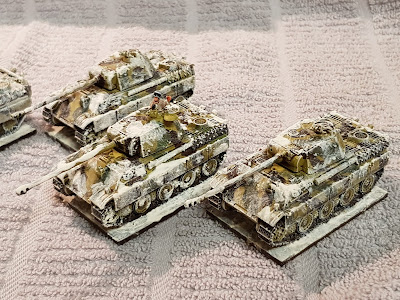 Platoon leader with commander in the hatch. 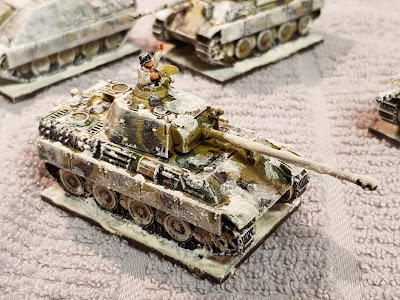 Close-up of the leader in a snow smock and frosted helmet. 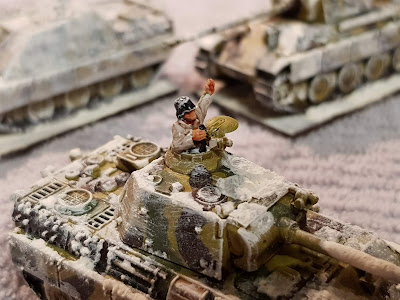 The whitewashed Jagdpanther.  I printed this one with the model standing on the rear end, resulting in the scan lines running vertically across the model when it stands on the tracks.  This wouldn't have looked good without the snow effects, which mask a lot of the printing lines.  Experimentation appears to be resulting in quite a bit of improvement in the final finish of 3d prints. 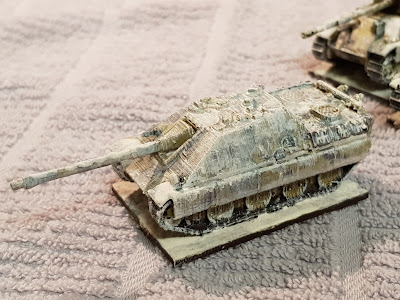 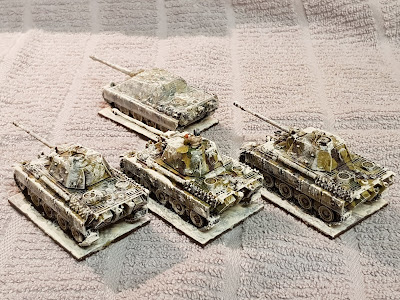 Detail of the snow effect on the Panther rear decks. 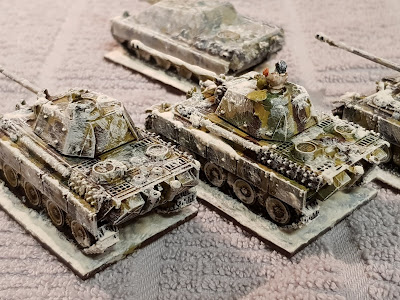 I have 4 StugIIIGs on the painting table, ready to winterise, so should soon be able to field the Recce infantry platoon from BG Wacht am Rhine, supported by a battery of Stugs, and/or a platoon of Panthers and a Jagdpanther, all suitably winterised.  They should also do for any late war eastern front winter scenarios.  I'm starting to feel chilly already.
More on the winter Stugs and some early war German kit, suitable for BG Blitzkrieg to Kursk to follow.  As ever, thanks for looking.
Posted by Andy Canham at 08:33 2 comments: