A bit of a diversion

A couple of weeks ago, I mentioned to another club member that I had a collection of 15mm Napoleonics at the back of my cupboard; the usual mix of British and French Waterloo era minis.  He said he had a collection and the next thing I knew we were arranging to dust them off and get them on the table for Black Powder.  I found my French tin pretty easily, but still can't put my hands on the tin of British - haven't seen them since we moved house 5 years ago.  Trying to remember where I had packed them set me off on a trip down Memory Lane and I recalled ordering them back in 1992 or 3 as a set of Minifigs packs from the Guardroom - a shop in Dunstable I think, that used to advertise in Miniature Wargames magazine.  I also added some Battle Honours Riflemen and a pack of Battle Honours (not Lancashire Games as I first thought) British infantry the following year at a Napoleonics show in Bridgenorth.

As I can't put my hands on the painted British, I could find the unpainted bag of Battle Honours British infantry, so thought I'd dig them out and have a try at painting Napoleonics for the first time in 20 years.  Just two bases of four infantry in firing pose.  On the whole, I found painting these a nice change from the usual drab colours of ww2 and modern soldiers and they seemed to paint up well compared to my memories of 20 years ago; perhaps my patience has improved or my eyesight has deteriorated.  One or the other.  Anyway, I probably won't win any prizes, but I'm really pleased with the result.  So much so that I'm going to pick up a few more packs at WMMS and work on them on and off as a break from moderns. 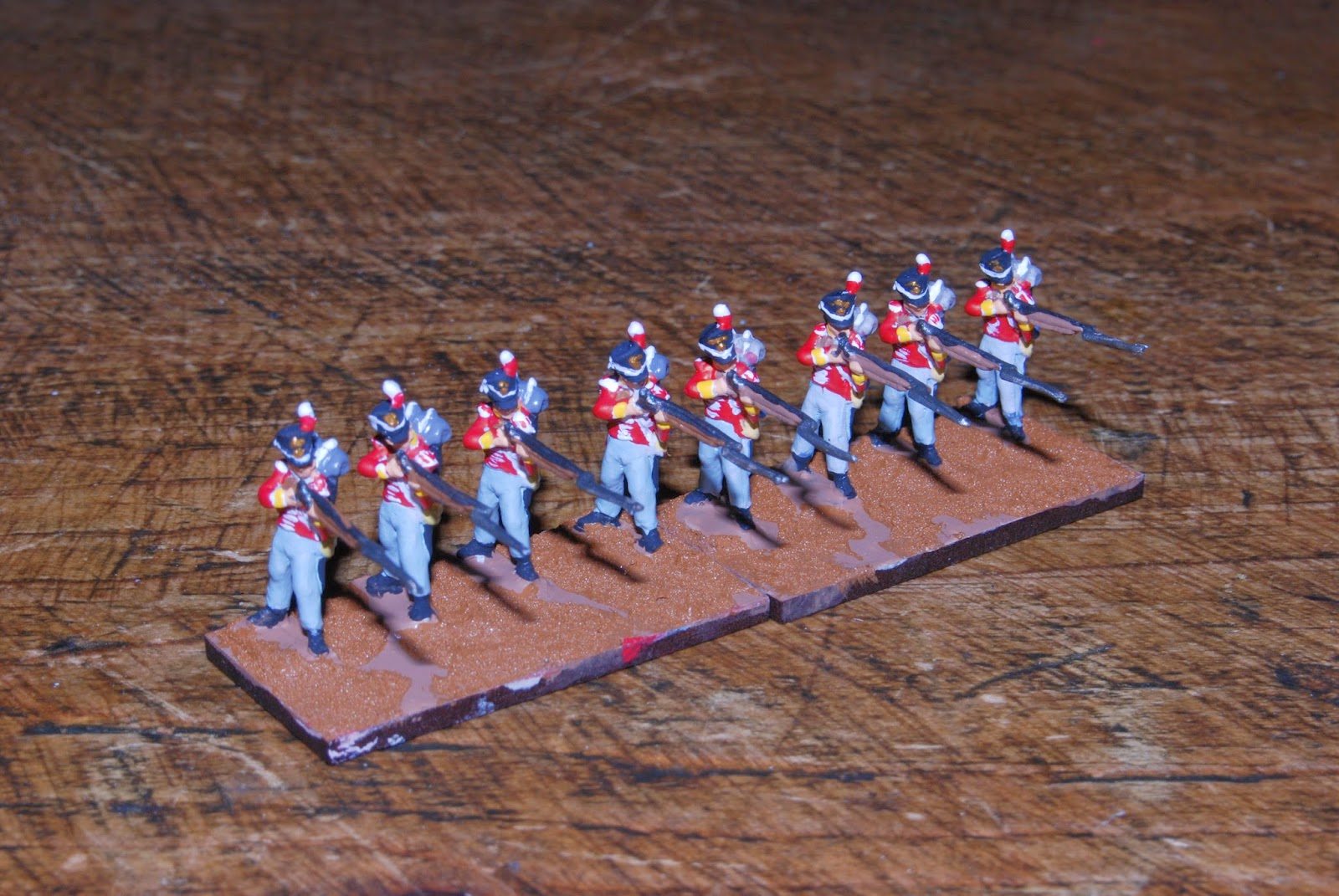 Thanks for looking.
Posted by Andy Canham at 21:55 4 comments:

These are modern USMC rifle squads advancing, from Elhiem (MCA02).  Each squad comprises 3 M16 armed marines (one with a UGL on left of rows) and a SAW gunner (on the right). 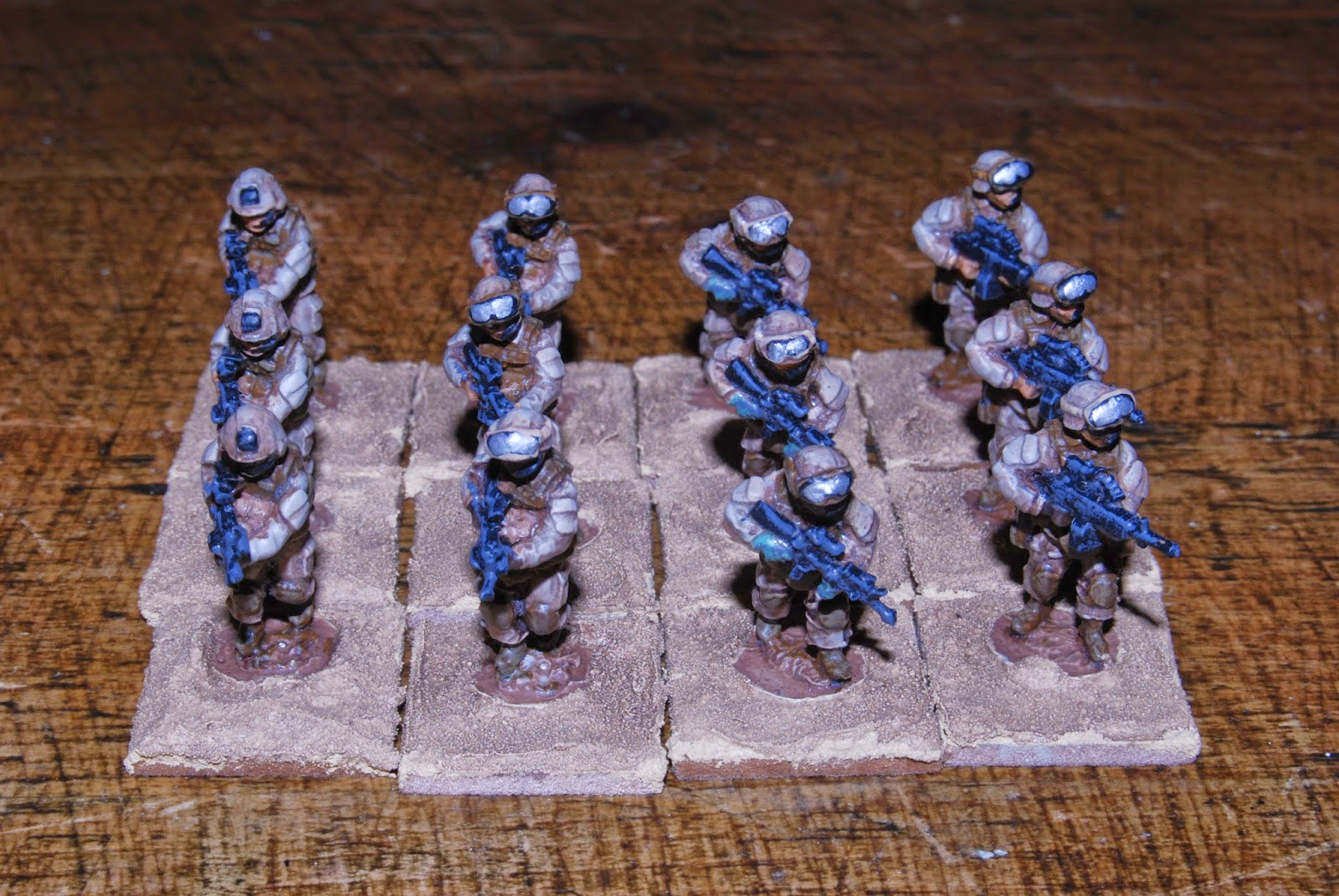 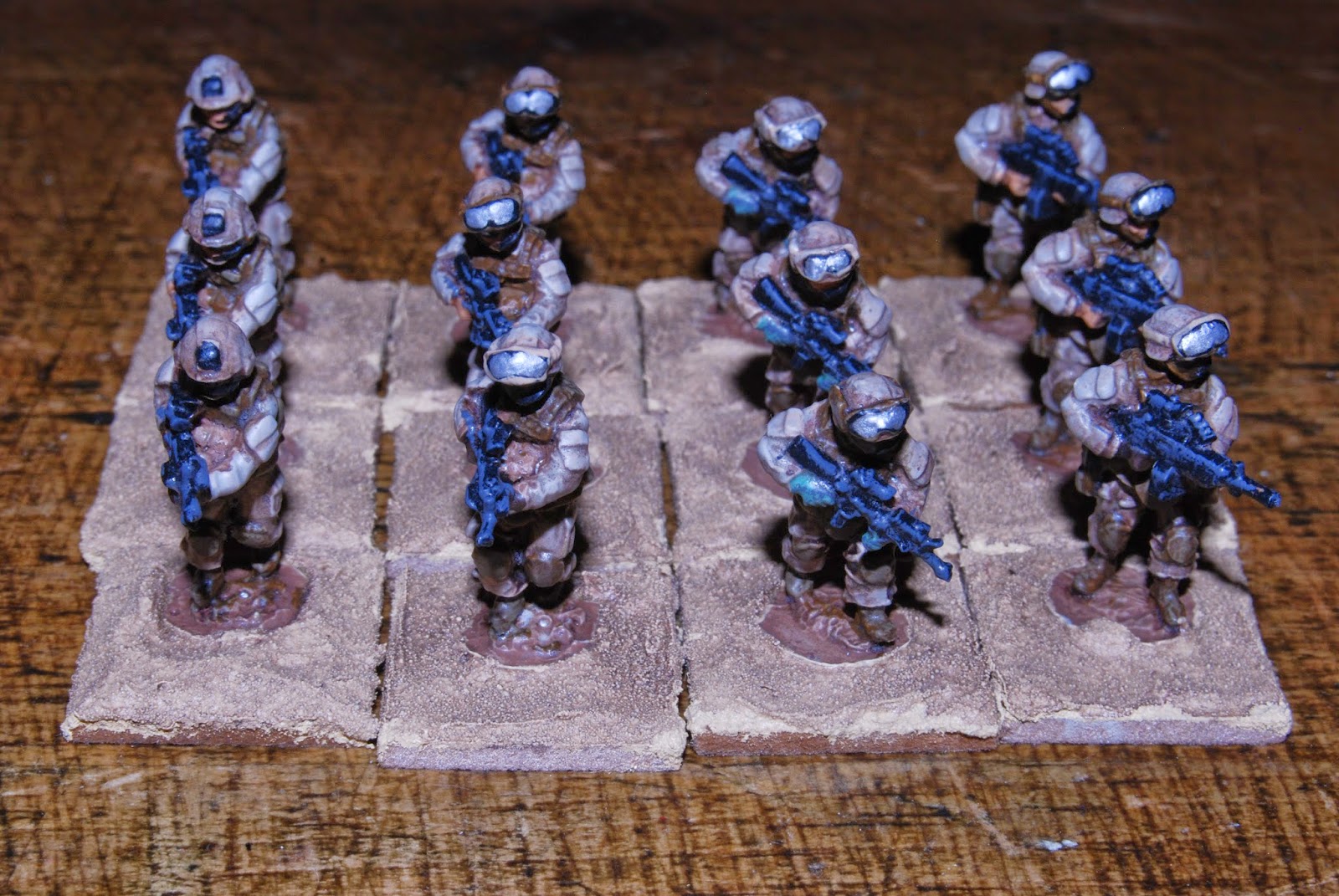 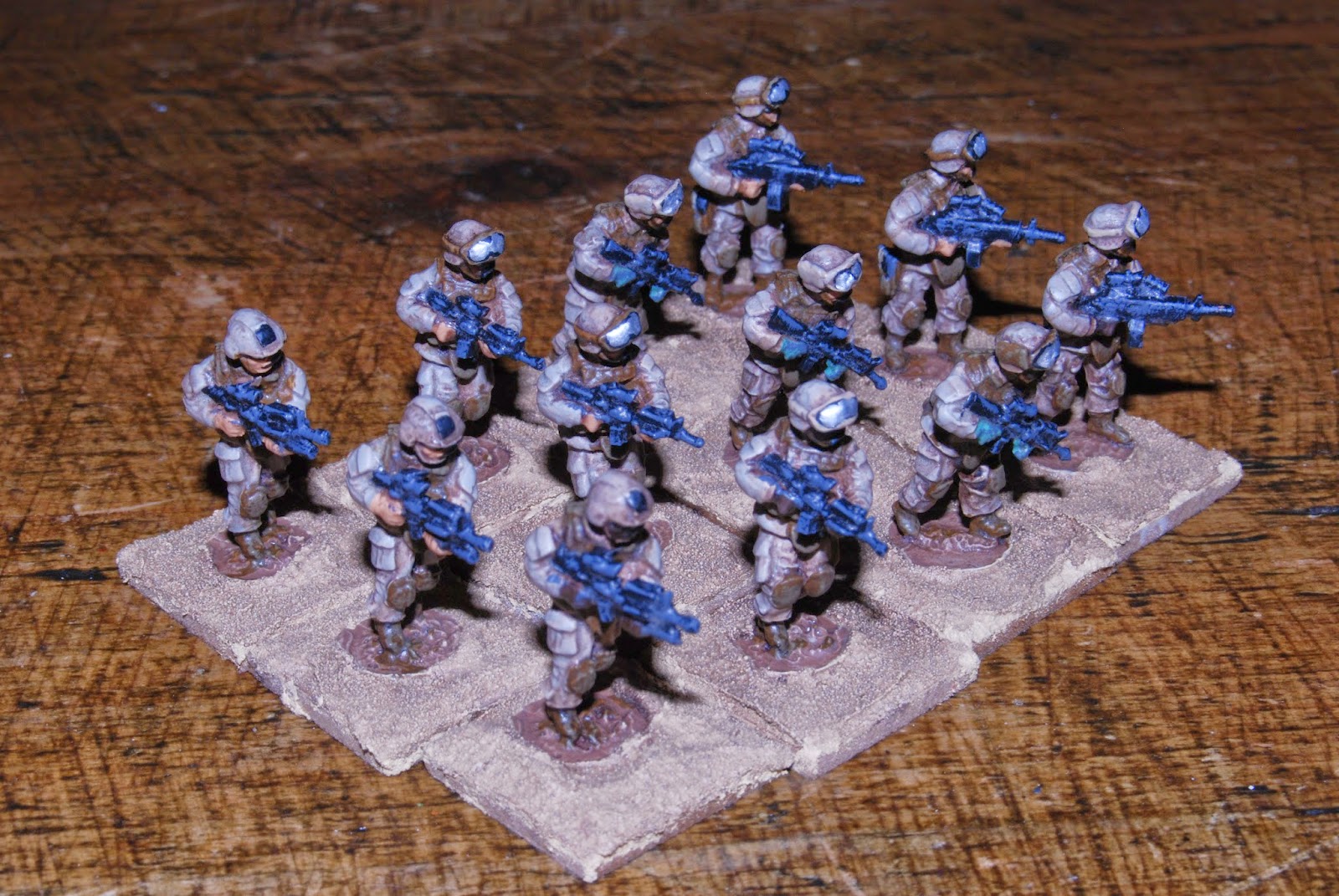 These were all painted the same way as the USMC squad leaders posted previously.

On the workbench now are three packs of MCA03 USMC squads in firing poses.

Thanks for looking.
Posted by Andy Canham at 16:39 2 comments:

I'm off to Dungworth at the end of March for Crisis Point 2015, to represent the Andreivian Turks in their fight for control of the fictional Black Sea country.  So, here are some additional reinforcements and specialists for use in the game.

First up, these are the additional Britannia crew figures from 4 AA Dushkas.  I've used the HMGs for technicals, so these can be used to crew them if they dismount or alternatively they can be used as leaders for our gallant freedom fighters. 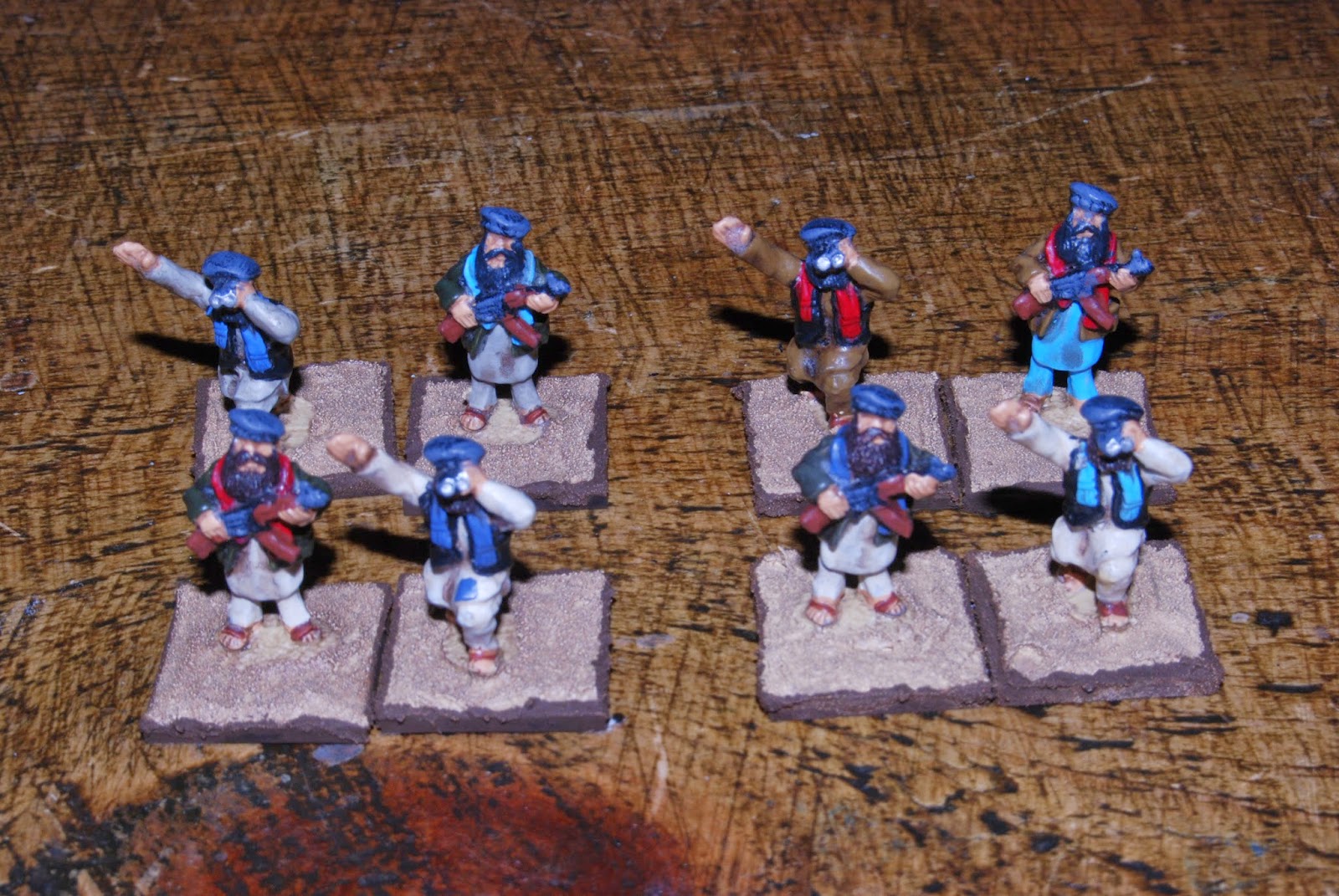 This is an Elhiem wheeled carriage Dushka with crew of three. 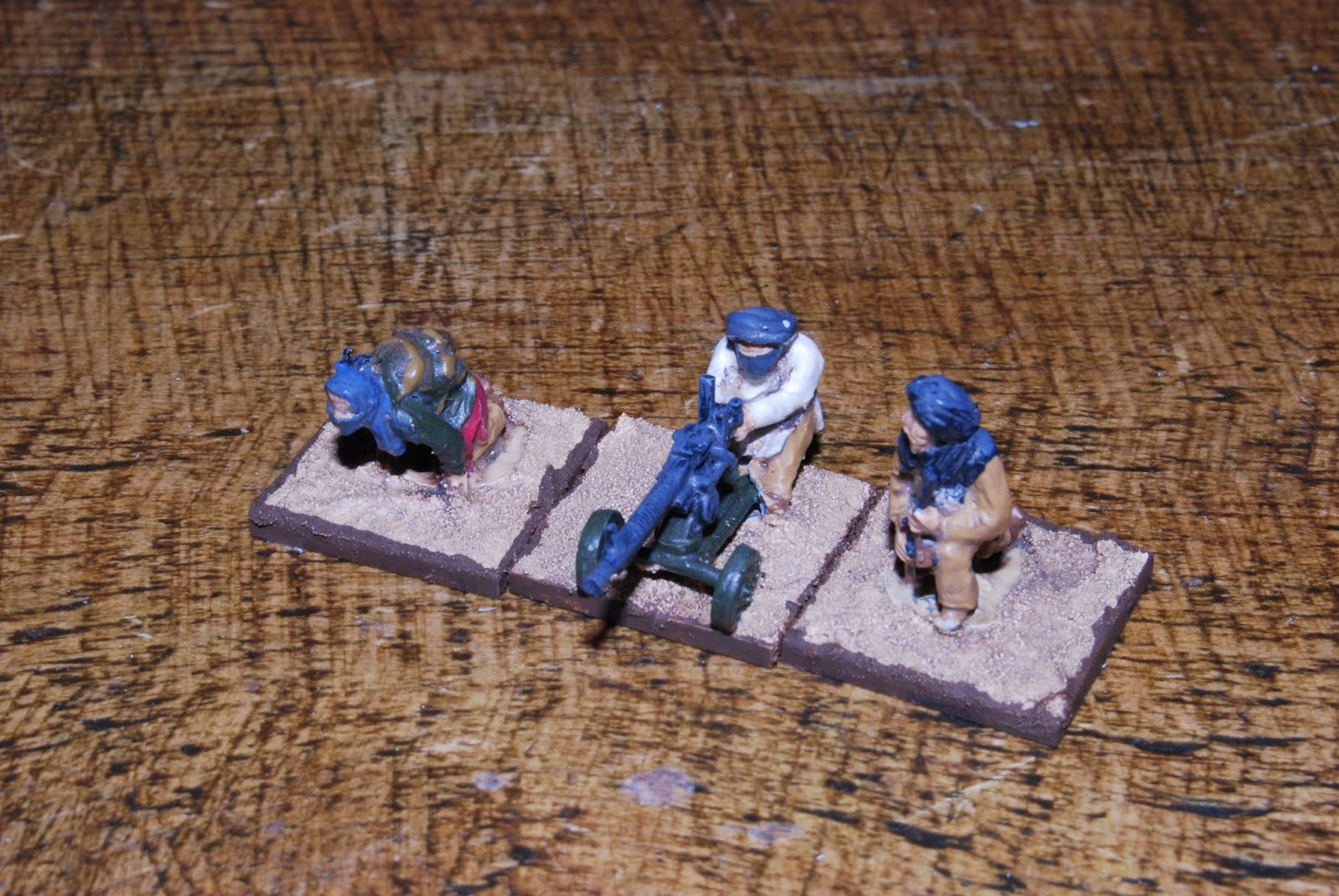 Four Elheim dickers or IED trigger men.  These should do as spotters for air or artillery, as well as to trigger IEDs and mines. 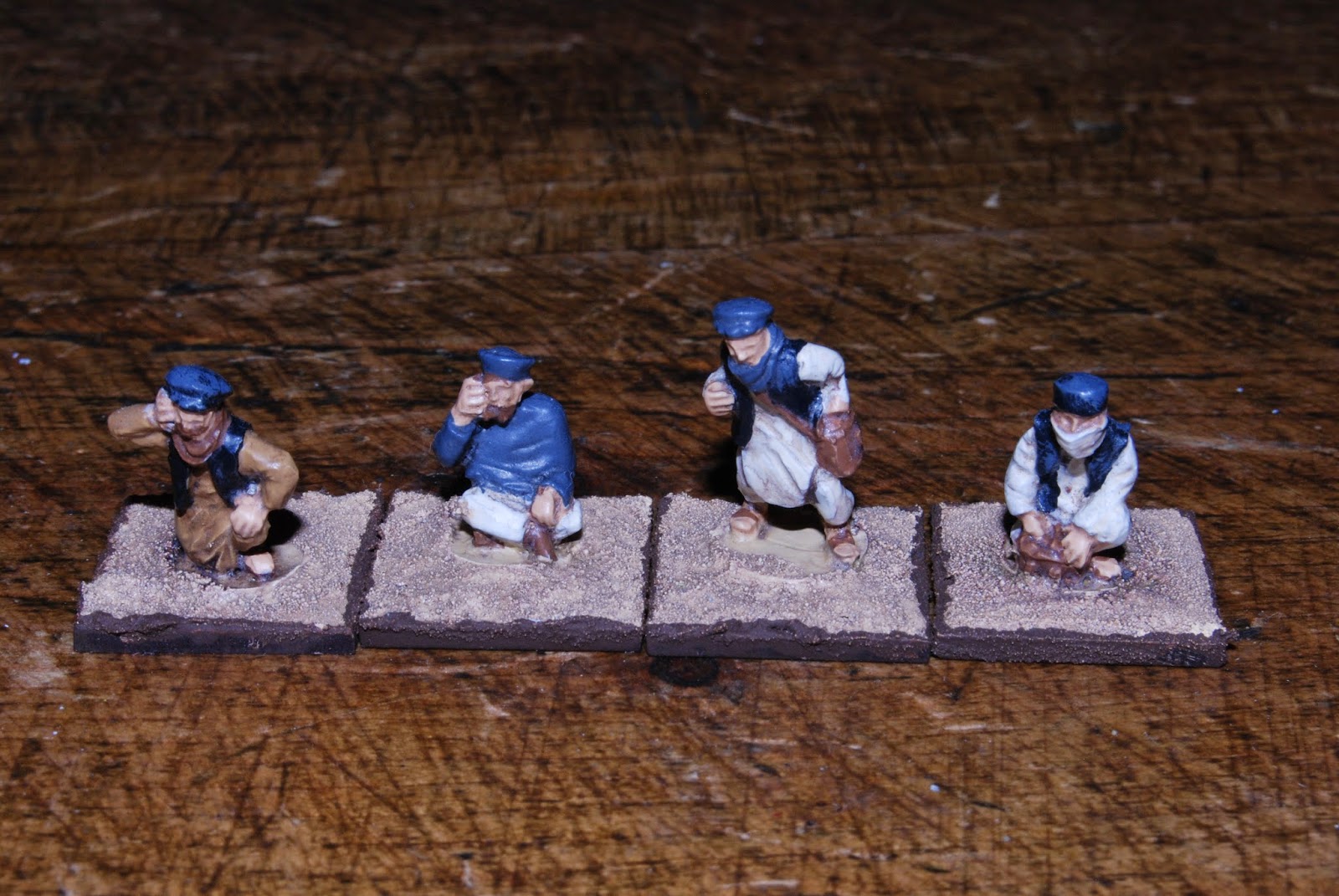 I ordered a mixed pack of insurgents from Elhiem and was pleasantly surprised to get this nice mix of weapons, with 2 RPG figures, 2 PKM or similar, 4 AK-74 and 2 LMGs with bipods.  These will help to fill out some of the volunteer units in the street fighting for the capital. 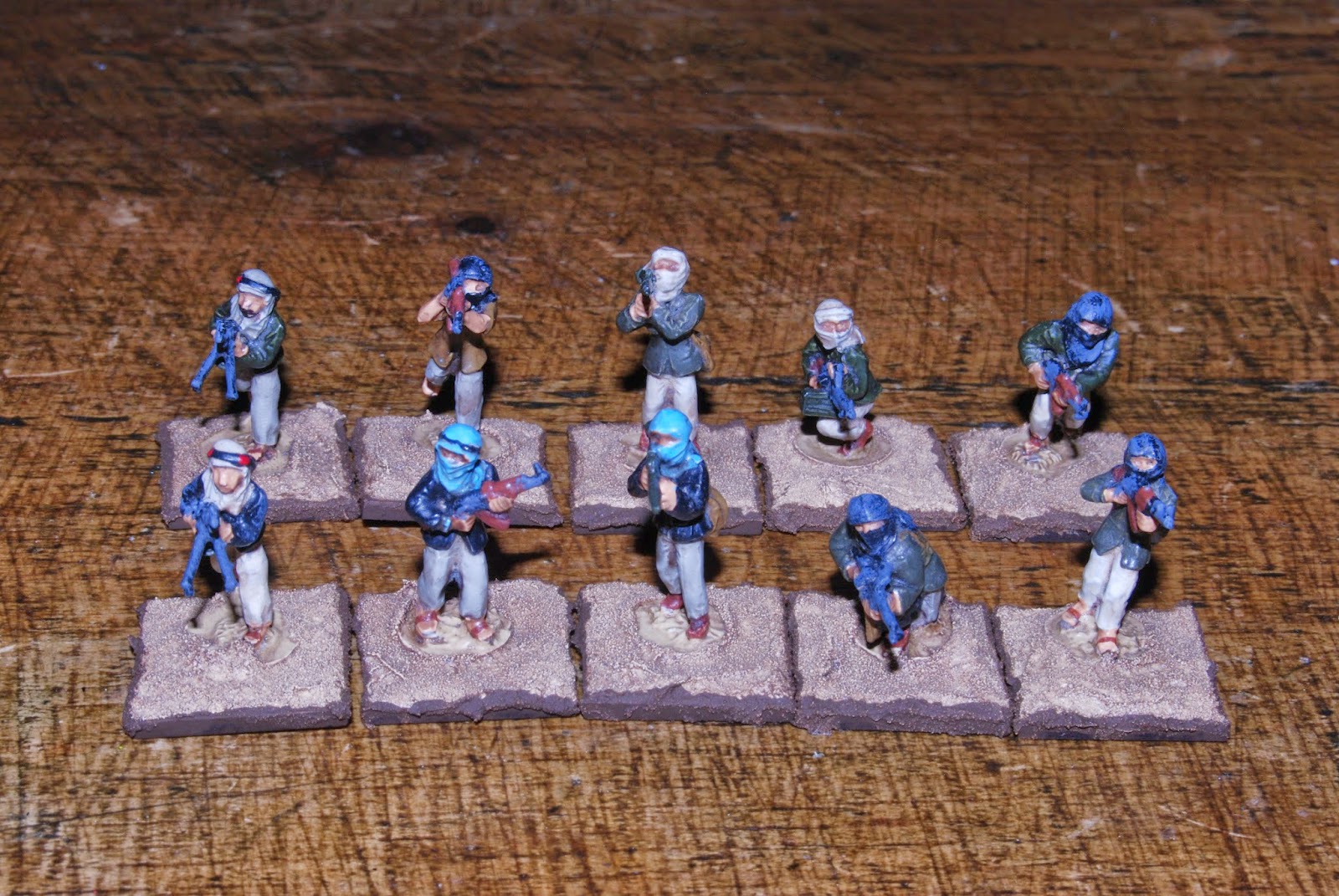 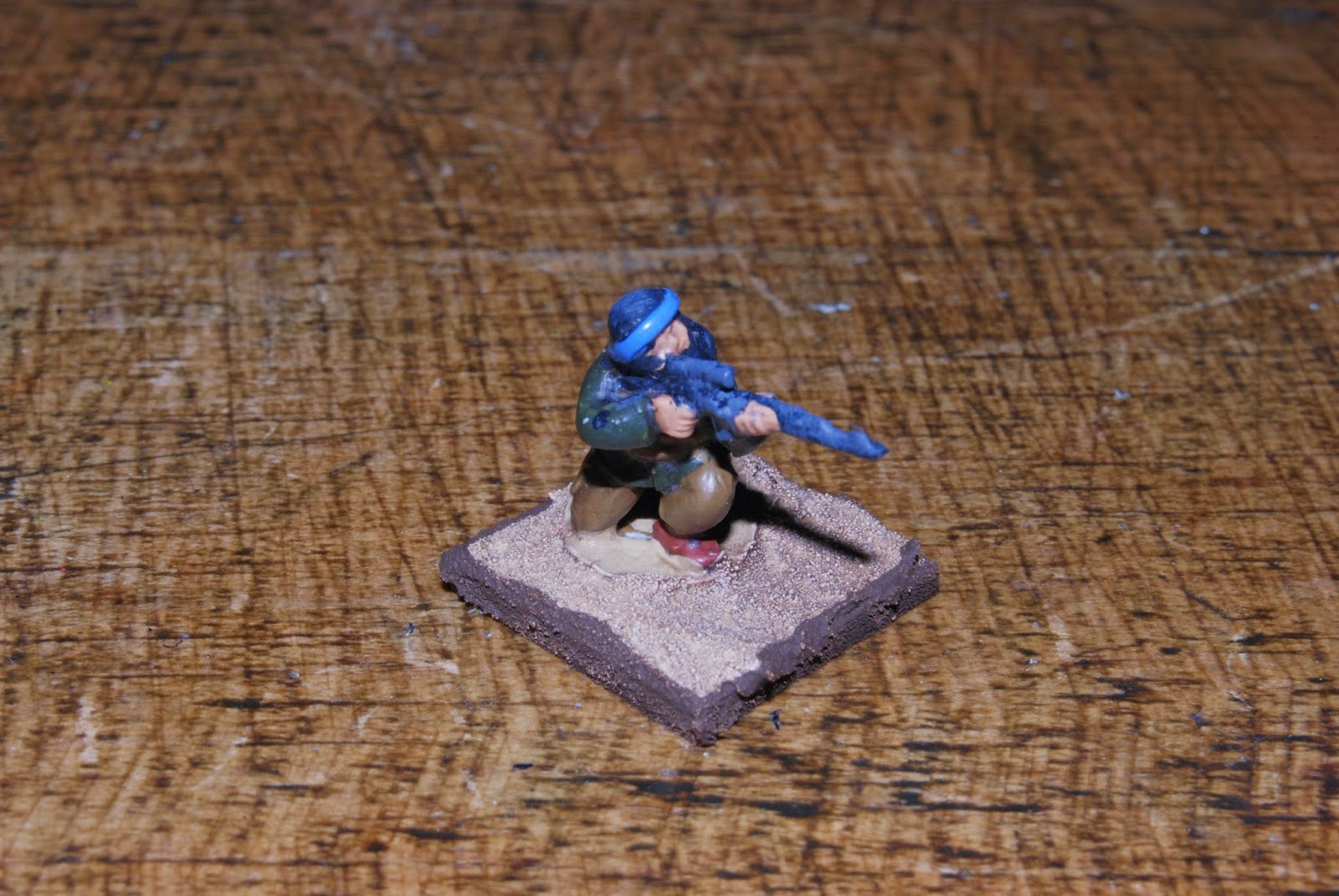 Some nice figures.  Those from Elhiem will mix in well with the Taliban and Chechen fighters that I have from Britannia and Underfire Miniatures, plus I got them in the Christmas sale - bargain.
Posted by Andy Canham at 18:21 5 comments:

Another little project for Tiger Phil at the Deeside Defenders club.  This time a Battlefront Arado AR234.  This was a fairly straightforward model to assemble, just the engine nacelles and the external bomb load in white metal to fix to the one piece resin casting. The kit comes with a chunky clear plastic flight stand, which needs assembling and a pair of neodymium magnets, one for the recess in the fuselage and one for the top of the flight stand.  You also get a set of decals, which I'm leaving for Phil to apply, and a FoW air support dice.

The aircraft was spray undercoated in Vallejo light grey primer.  Panel edges and control surface edges were picked out in Vallejo NATO black.  Then the top and sides were painted in Vallejo model air Green RLM62 and the underside in Vallejo Sky Blue.  A camouflage pattern was added in olive green, made by mixing equal parts of reflective green and yellow green in a relatively angular splinter pattern.  Engines were initially painted NATO black, then dark sand for turbine bosses and flat red for the rim of the engine nacelles.  Finally, the cockpit canopies were painted azure and dry brushed white.  The aircraft was coated in Vallejo matt varnish and canopies were then varnished using Vallejo gloss.

From the front quarter. 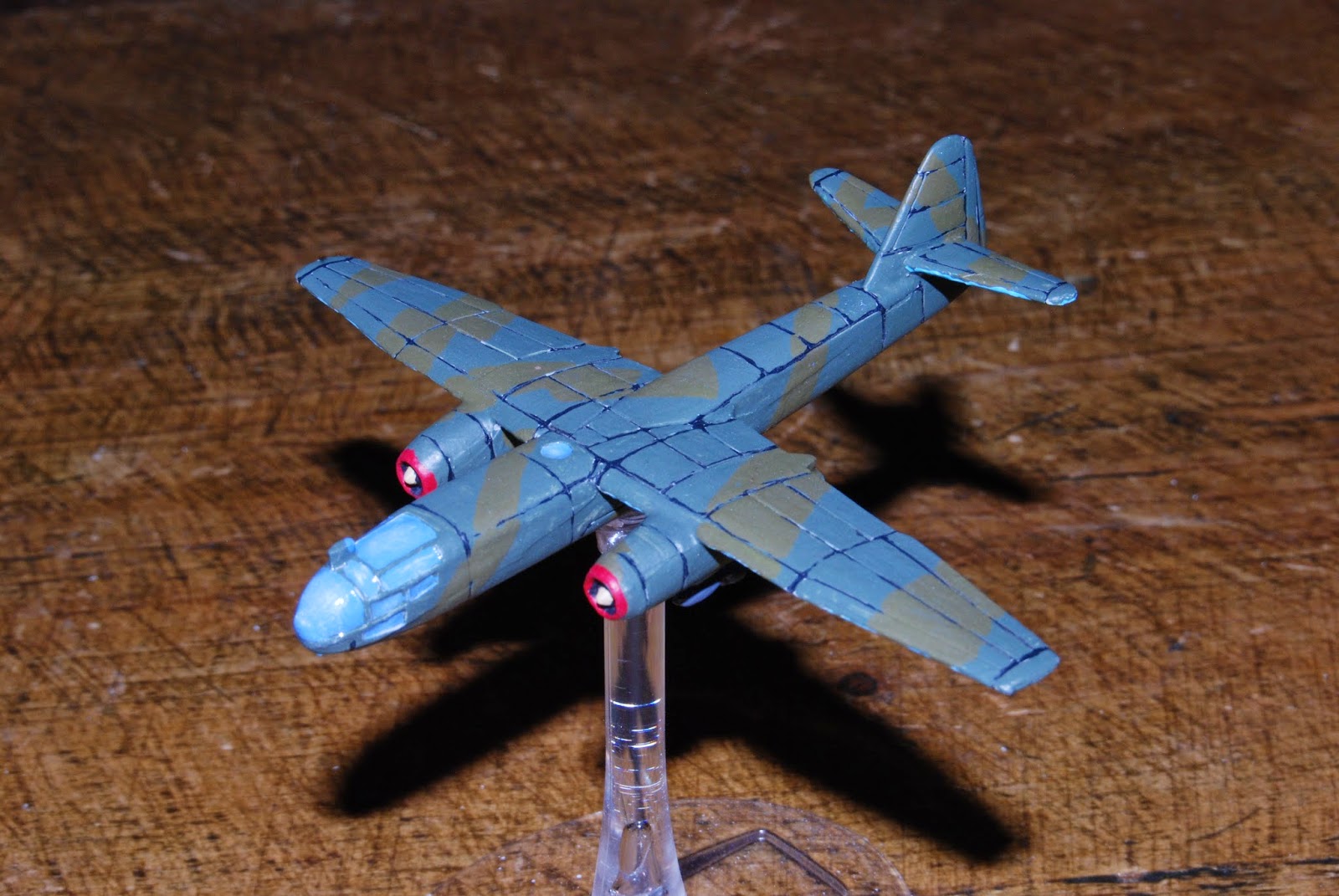 Rear quarter, allied piston engine fighters would almost certainly not be able to catch it from this position. 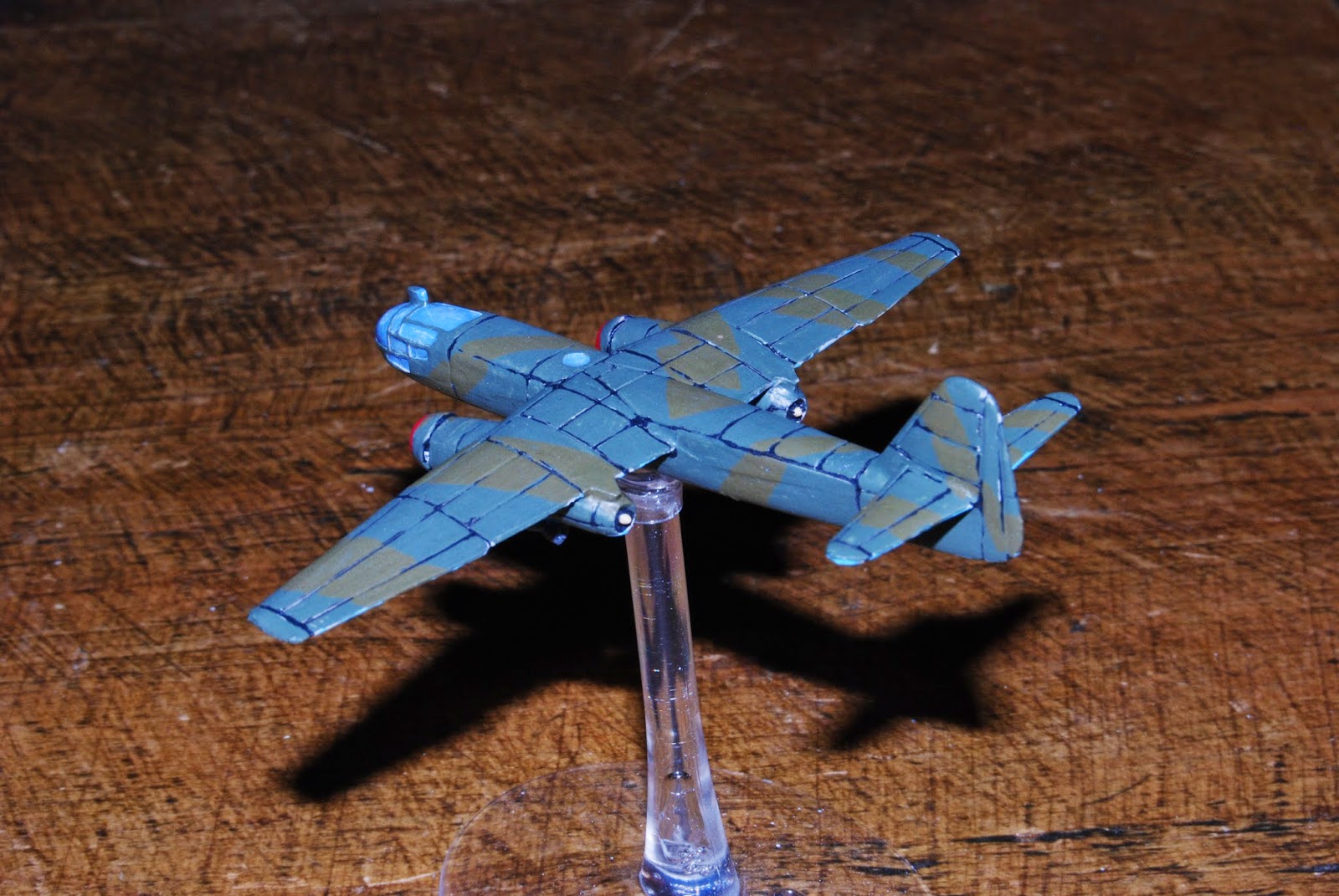 The underside, showing external load bombs slung from hard points underneath the engines.  Seems like an awful lot of technology to carry two comparatively small bombs. 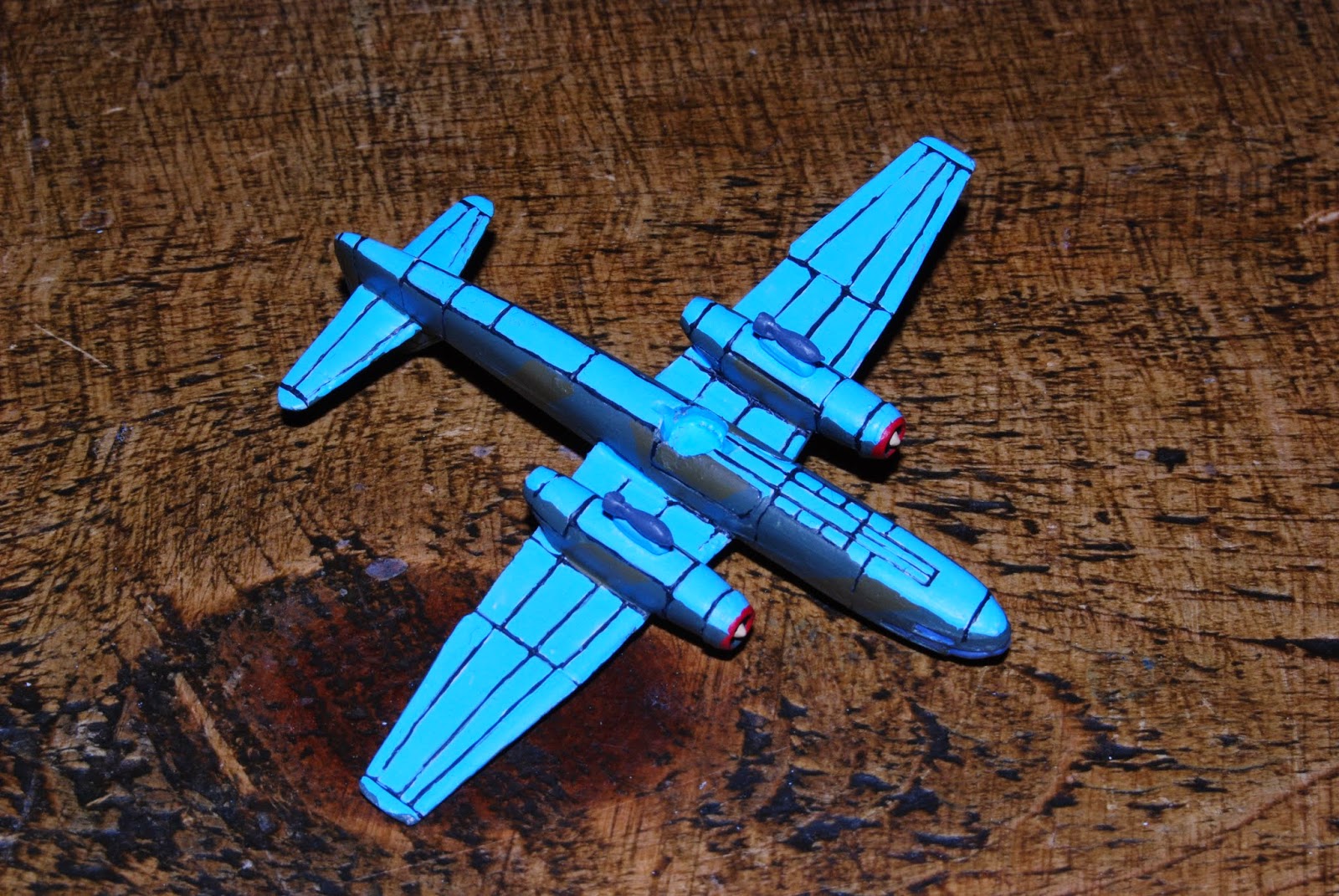 Quite a nice model to put together and paint.  Not too many uses unless you're planning to try and bomb the Ludendorff Bridge, but could be used for those very late war battles with the Western Allies or the Soviet hordes.

Thanks for looking.
Posted by Andy Canham at 22:19 2 comments:

These are die-cast toy cars, Matchbox Datsun pick-ups and a pound store Ford pick-up.  The crews are Taliban AA HMGs (Dushkas) from Britannia.﻿ Vehicles were undercoated light grey and then painted black green or ivory.  They were then distressed by dry brushing areas likely to be scrambled over or scraped with gunmetal.  Then specific areas were washed with strong tone ink mixed with a little orange ochre to simulate rust.  Windscreen and windows were painted azure and dry brushed white. 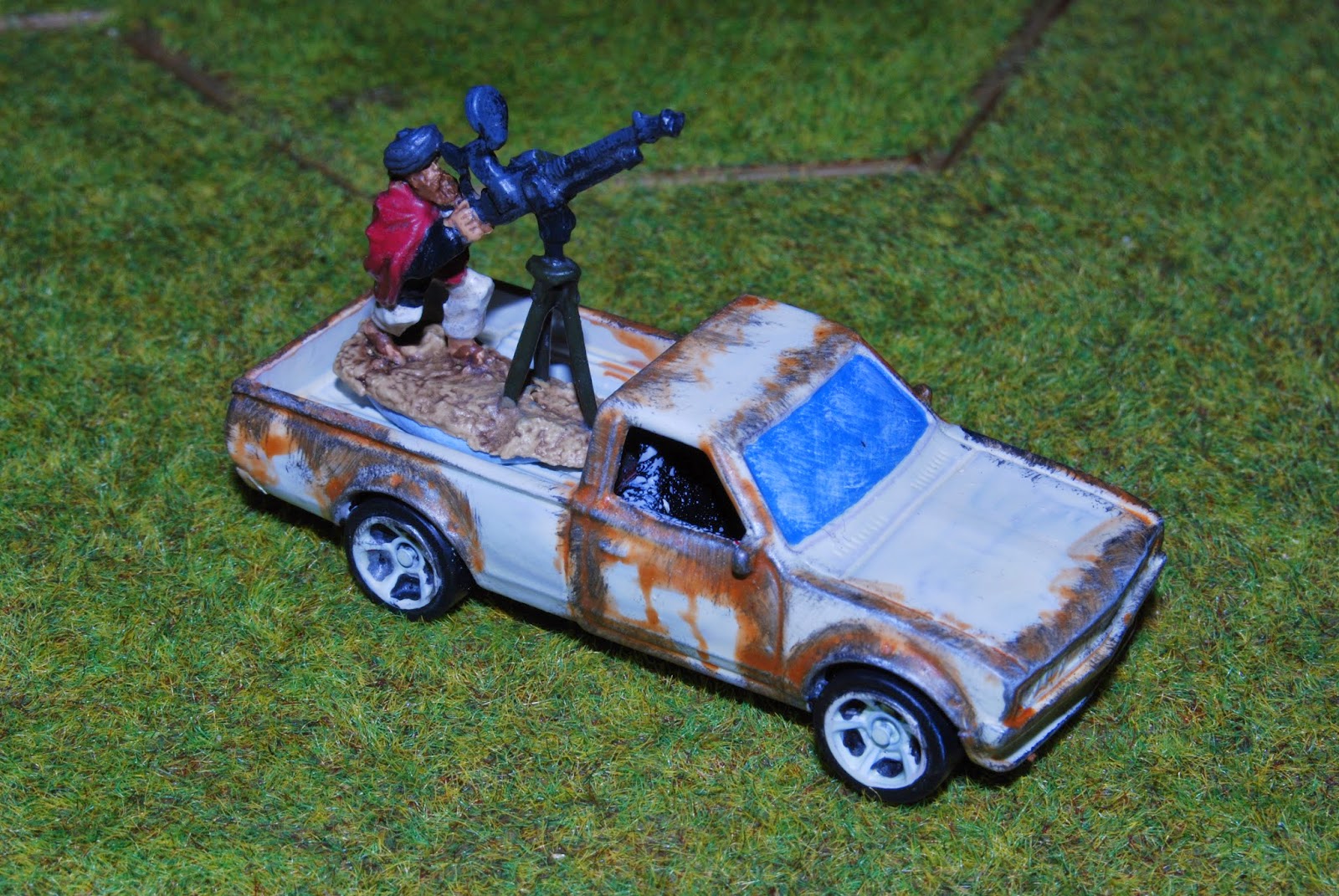 Figures are Blu-tacked in place, but I need to get some stowage to help hide the bases. 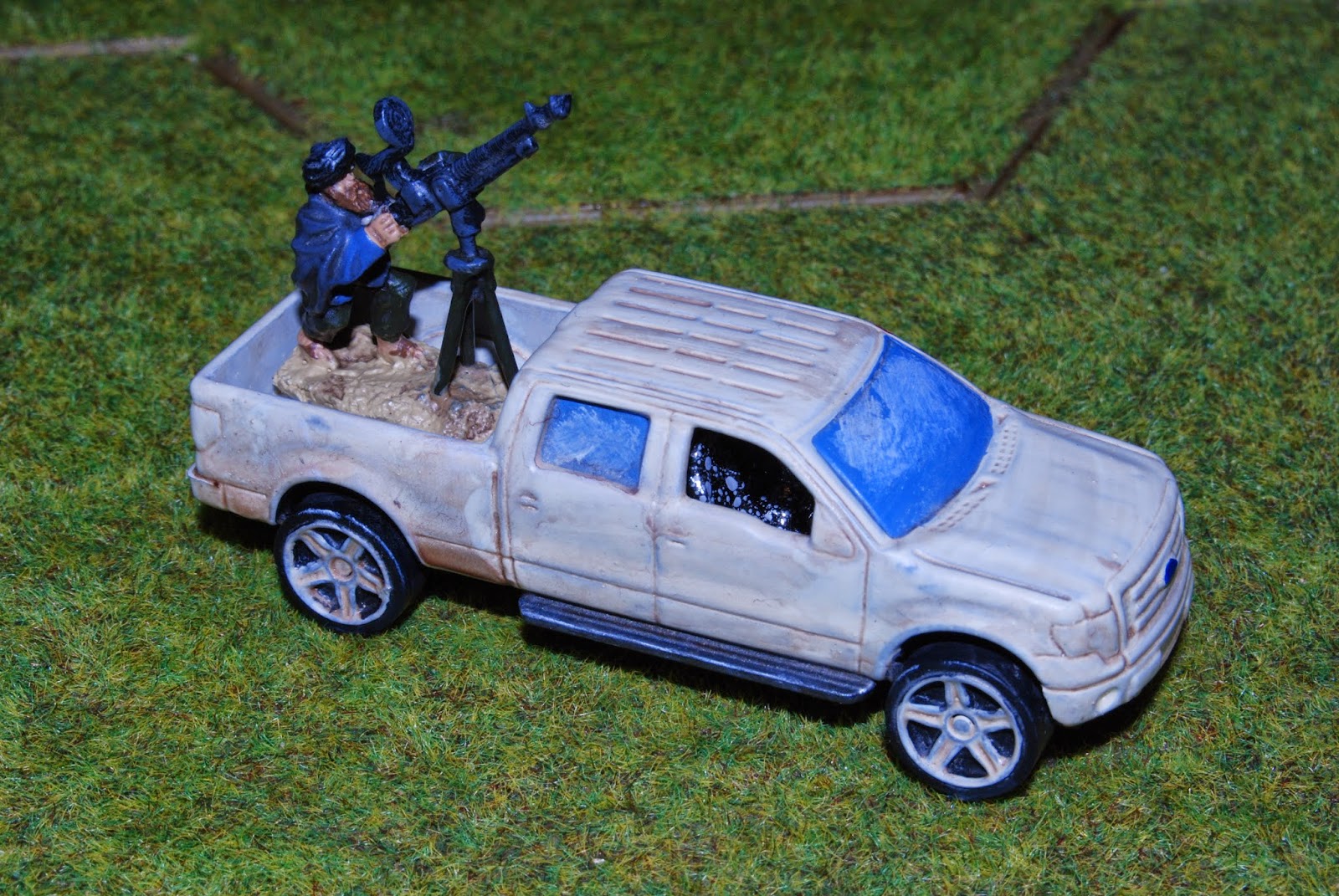 From the back.  You can see the dark red highlighted door, simulating a visit to the scrap-yard to replace a shot up original door on the Ford.  The Datsun branding was added in black grey or ivory. 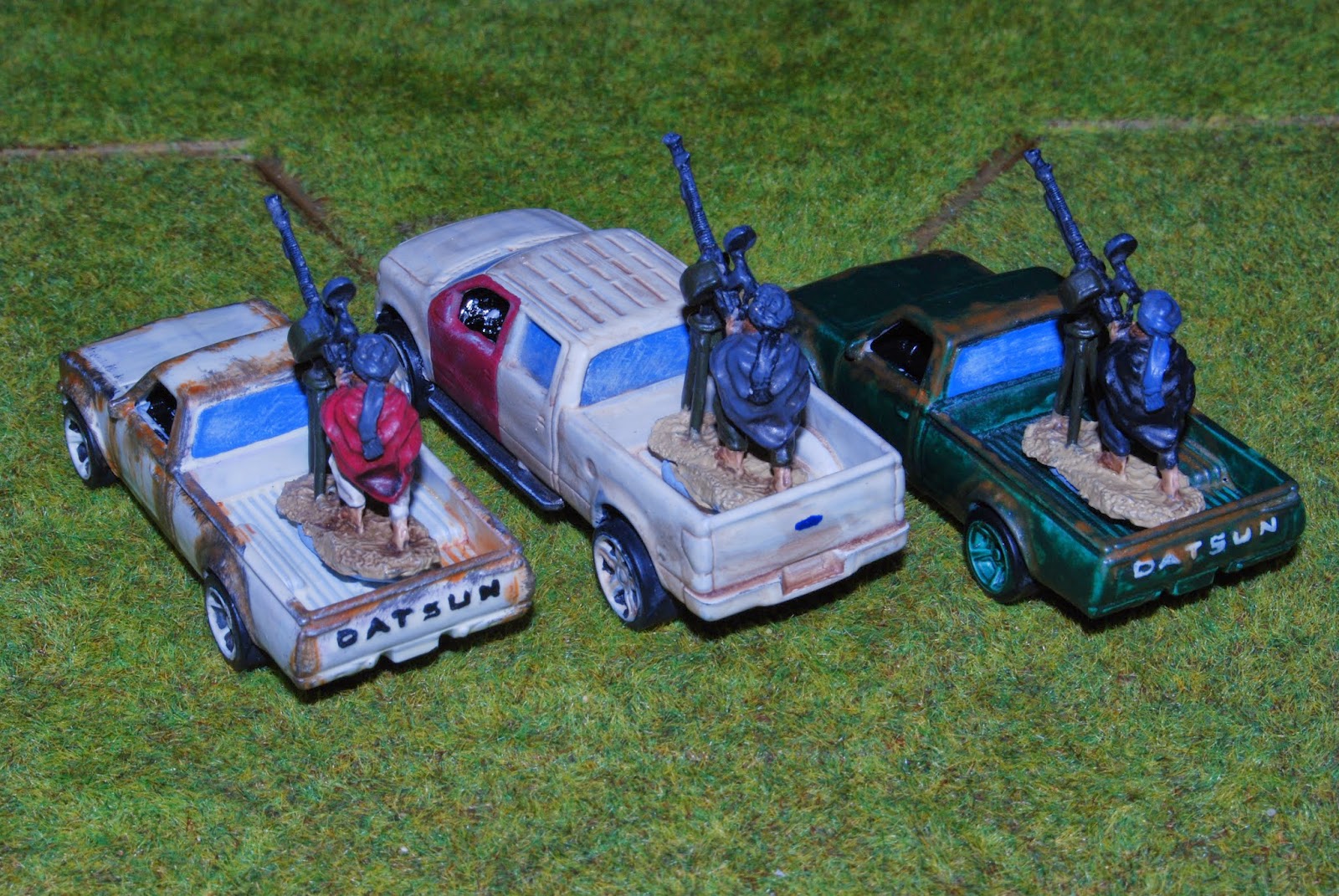 Hopefully these will be making an appearance in Andreivia at the end of March.

As ever, thanks for looking.
Posted by Andy Canham at 18:53 6 comments:

Armed British police officers from Elhiem (BAOR12/13/14).  They are armed with SLRs, Sterling SMGs, M1 carbine, G3, mini14 and pistol.  As they represent police of the 70's and 80's, they reflect a more sexist time, as the female officer carries nothing more dangerous than a radio handset.  I might have to add some of the figures from Underfire Miiniatures as they reflect more modern police officers, including armed female officers. 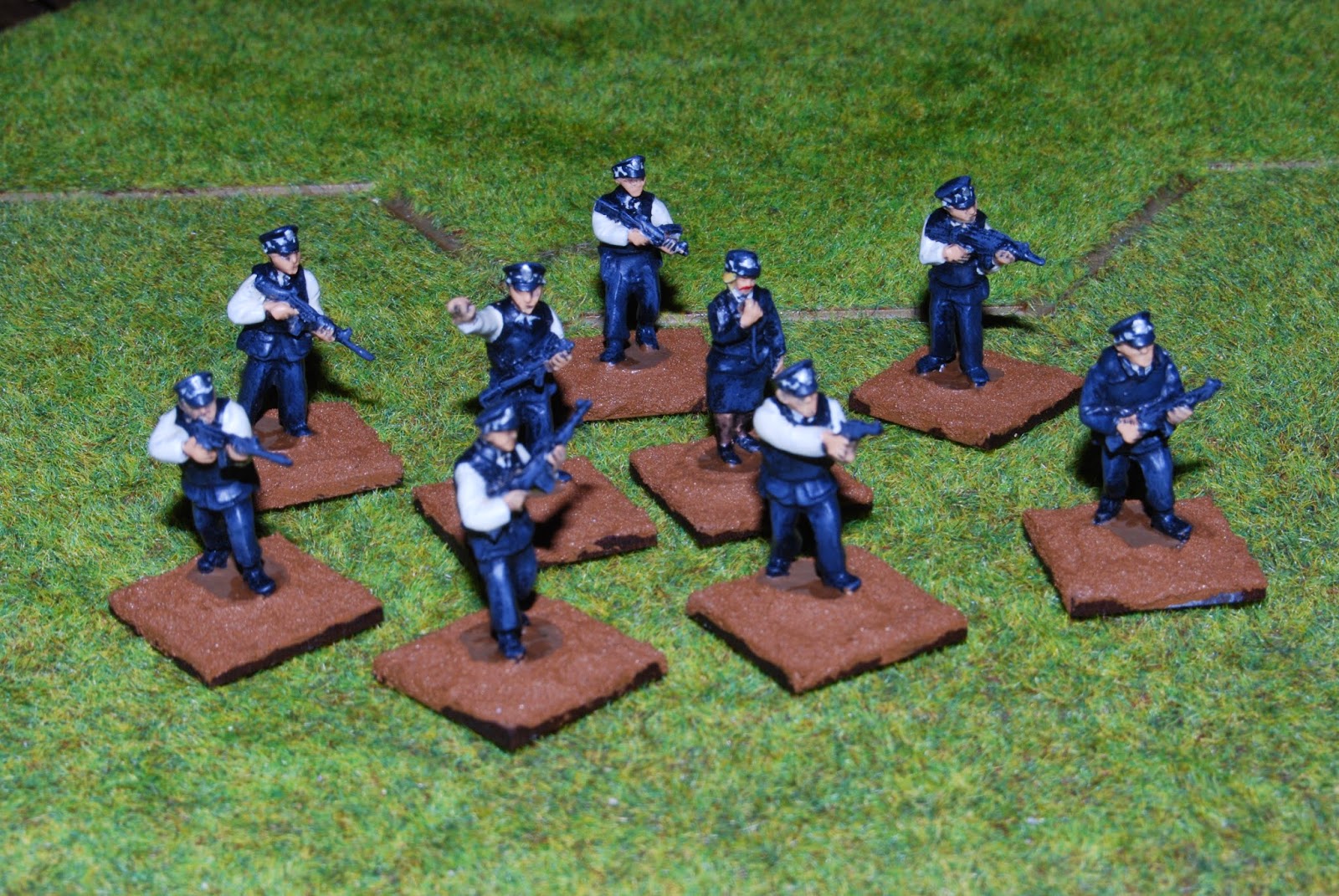 These were undercoated light grey, then painted NATO black, dry brushed black-grey.  Trousers and, in the case of the inspector on the right, coat sleeves, were then dry brushed medium grey.  Shirt sleeves were painted ivory.  Flat flesh for hands and faces and the WPC's legs.  Washed with Army Painter dark tone ink diluted 2:1 with acrylic thinner.  Faces and hands were highlighted in flat flesh.  Aluminium was used for cap badges and the inspectors shoulder pips.  Weapons are NATO black, dry brushed basalt grey.  I used dark tone ink undiluted on the WPC's legs to simulate the effect of semi-transparent nylons and added some flat red for her lips - well a girl has to look her best even if WW3 or the zombie apocalypse breaks out.  I have to say that painting the black and white checked pattern on the hats and the WPC's scarf was tricky and accomplished with much cursing. 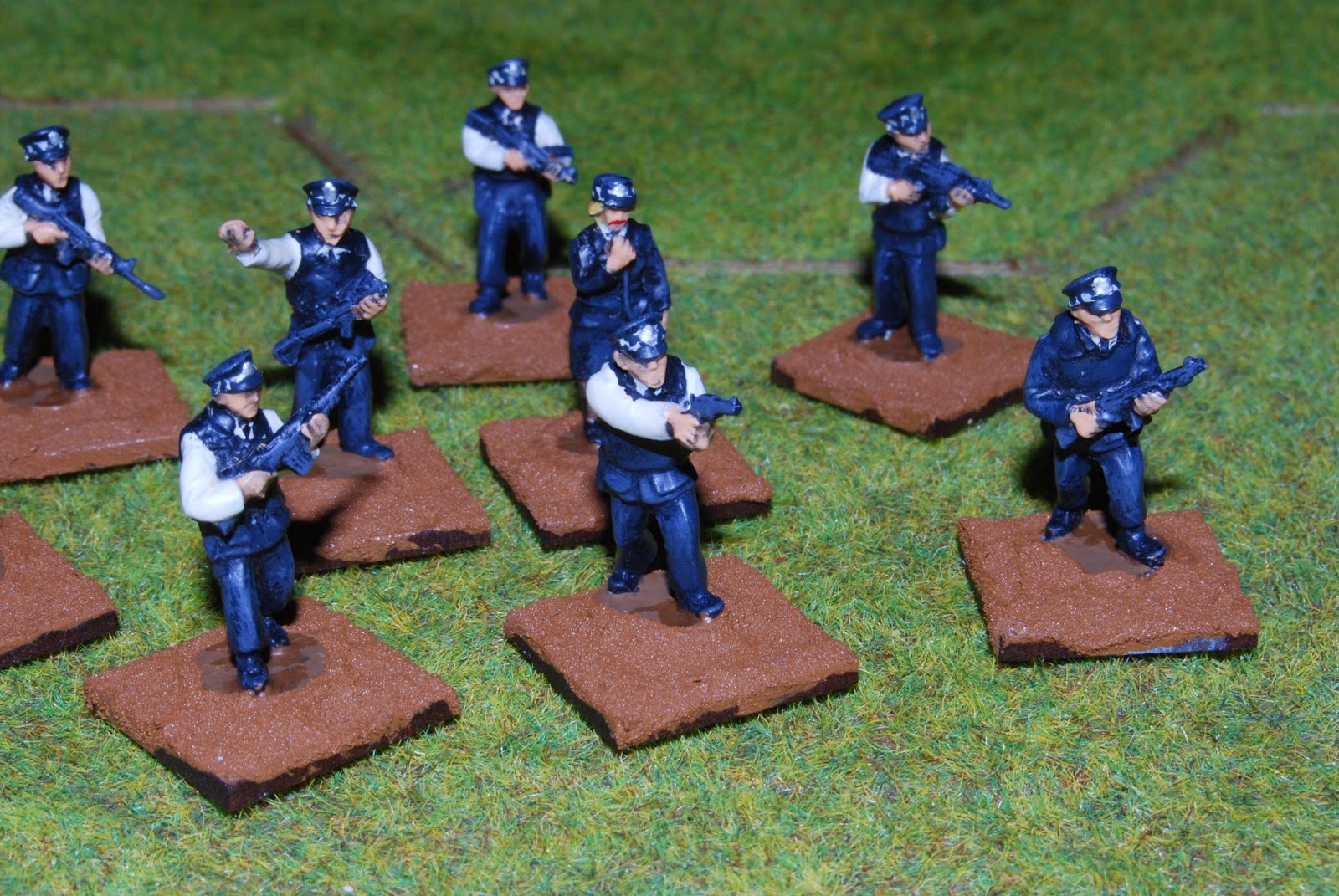 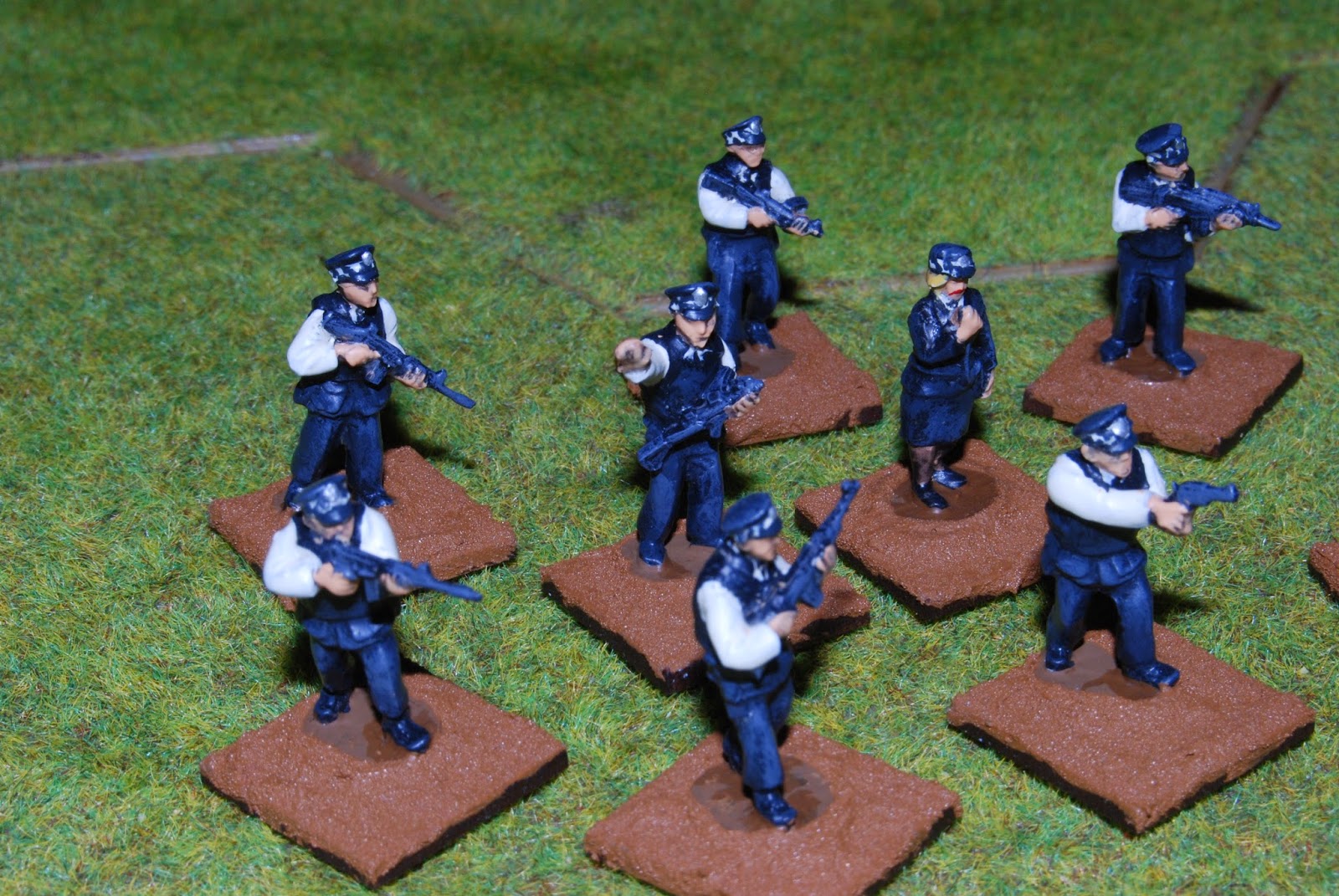 A typical scene outside many military bases, especially in the 1980's, were armed military gate guards (in this case an SLR armed MP from Elhiem BAOR17) accompanied by police officers, usually unarmed though from my memory of the guards outside the old RM barracks in Stonehouse, the Royal Citadel in Plymouth or Bickleigh Camp on the edge of Dartmoor. 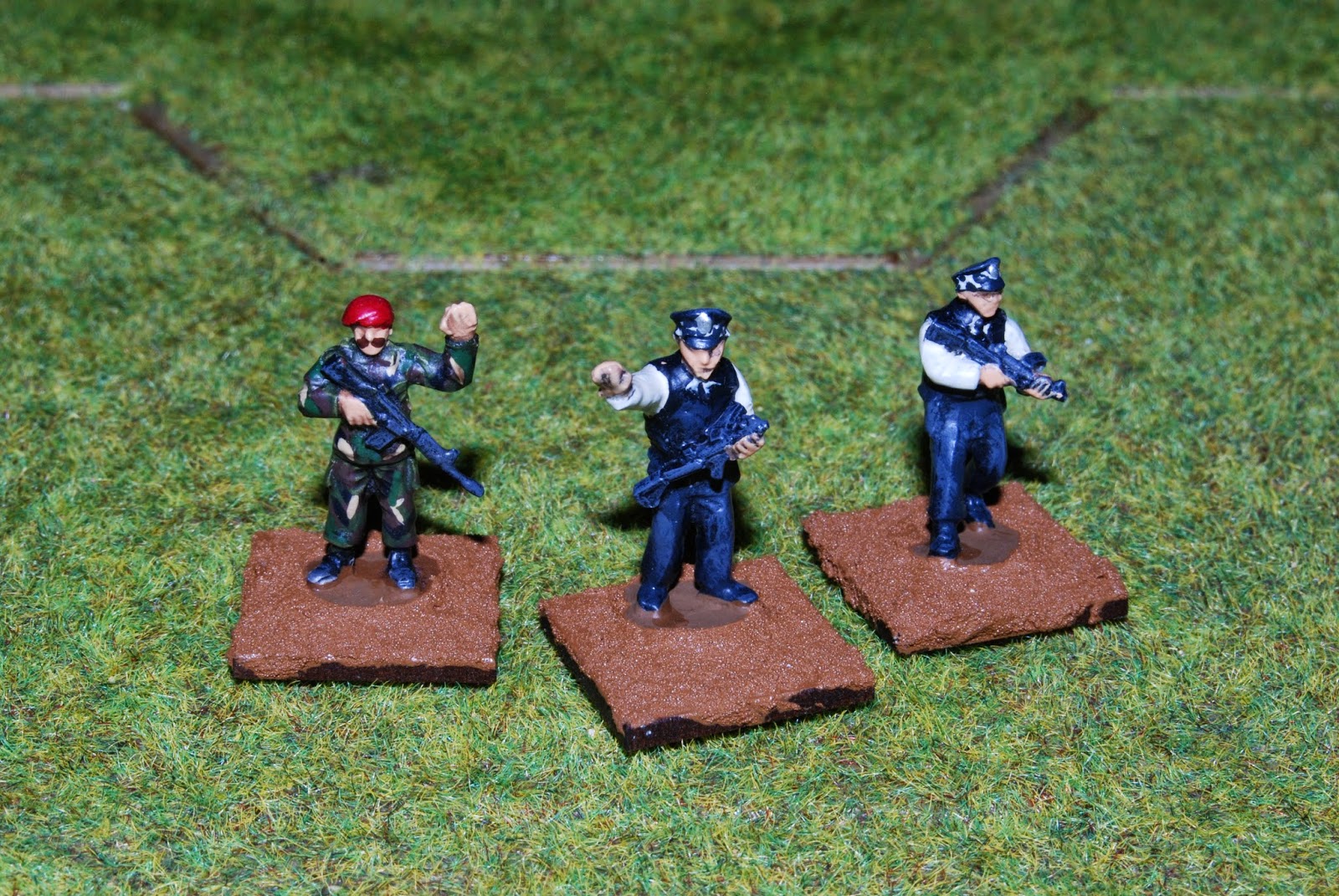 I guess there were similar sights in Northern Ireland, although the police officers would have been wearing a dark green RUC uniform. 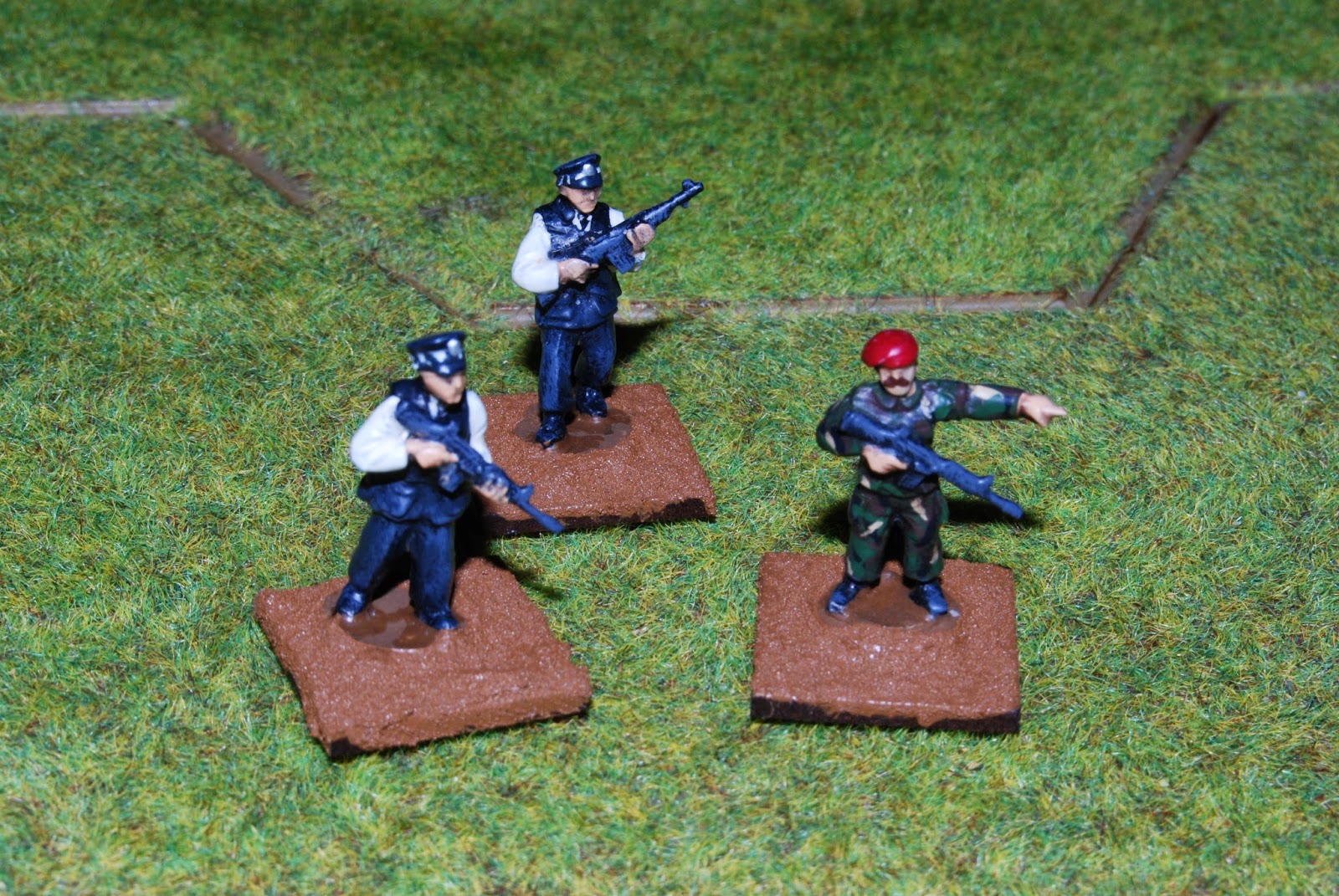 The two MP figures from BAOR17, sporting some very topical moustaches, characteristic of the troops seen in archive images from the Falklands and also to be found on the top lip of yours truly in the 1980's.  These are painted as I did for the BAOR NBC section posted earlier. 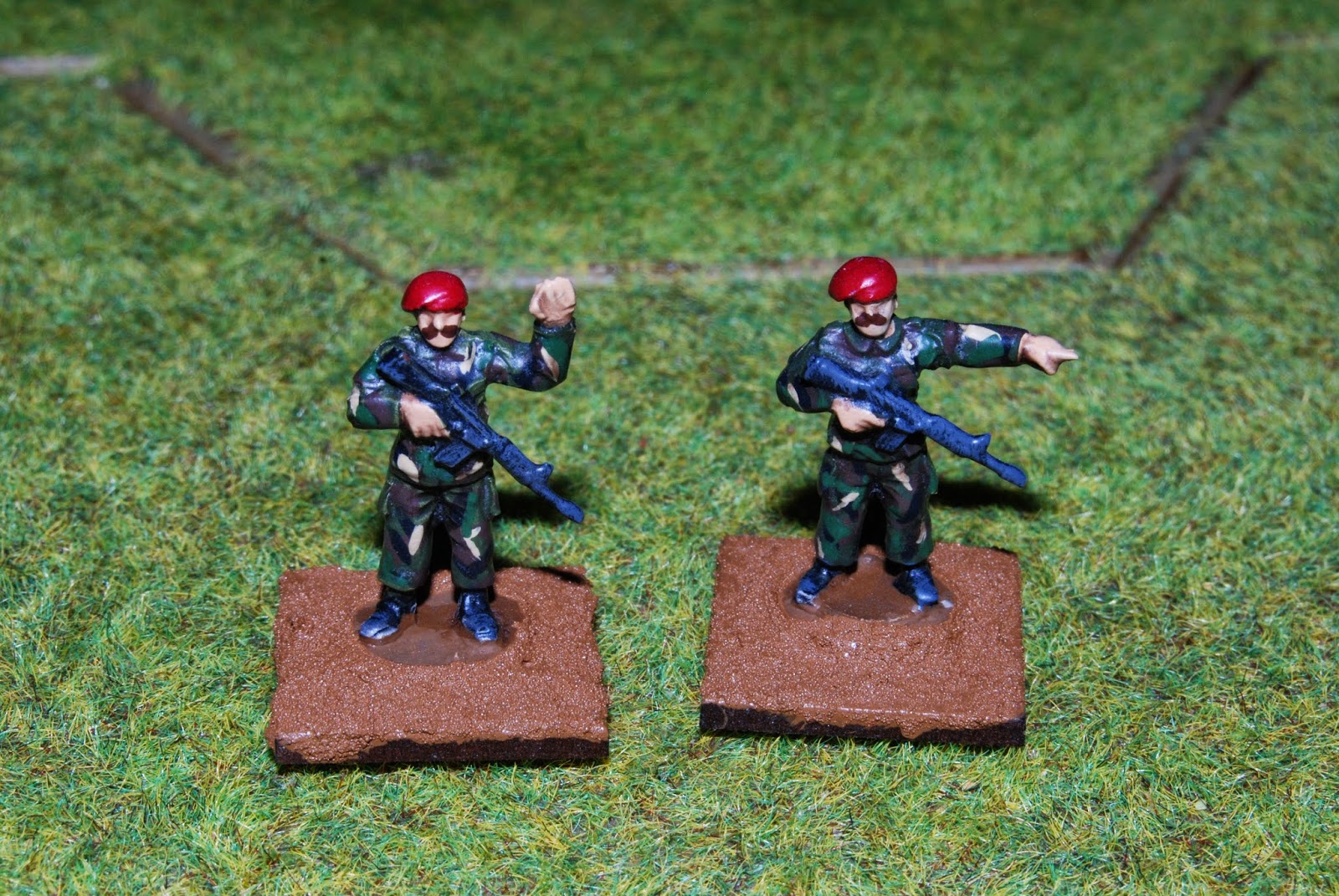 These will be great for urban unrest, sci-fi (thinking Dr Who and UNIT here) and zombie scenarios, as well as protecting key military structures in the U.K. home area in the event of the cold war warming up.

Thanks for looking.
Posted by Andy Canham at 09:35 2 comments:

This is the Elhiem BAOR infantry section in NBC gear (BAOR02).  Figures are armed with SLRs, except the Charlie G gunner who has a sterling SMG, and a GPMG gunner.  The GPMG gunner and assistant have ammunition belts slung around their necks. 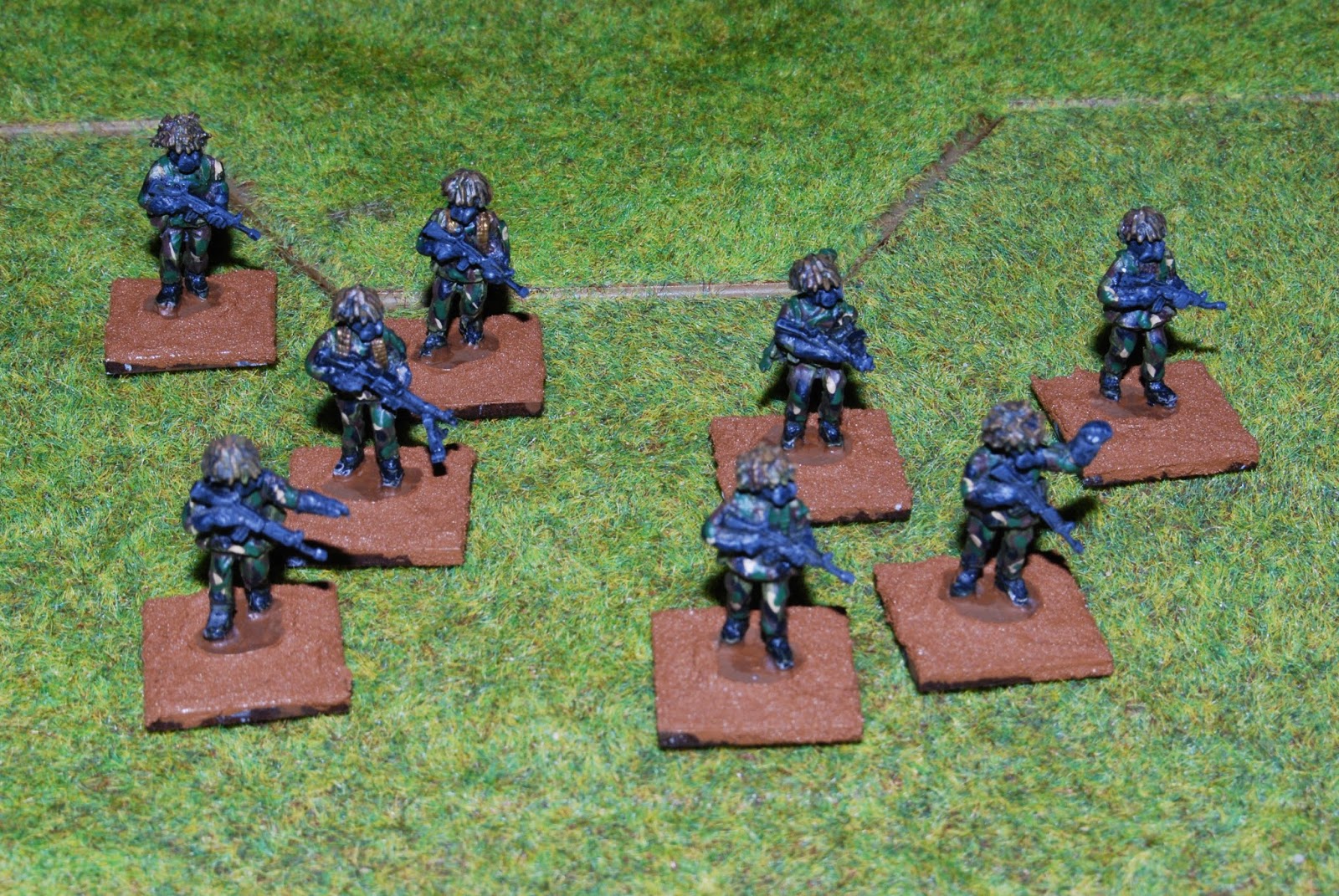 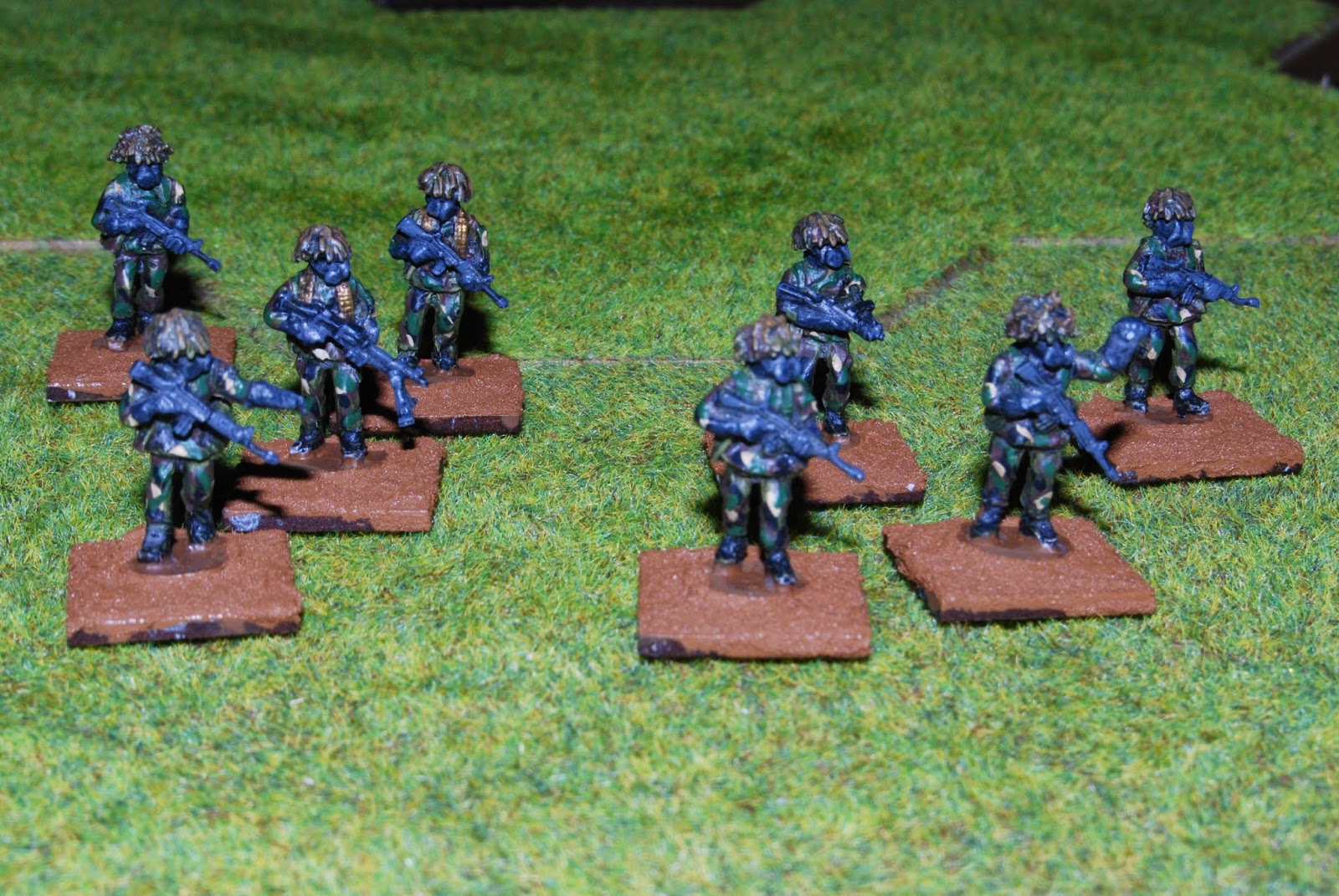 The section commander, centre right, with behind him to the left the Charlie G gunner with Sterling SMG. 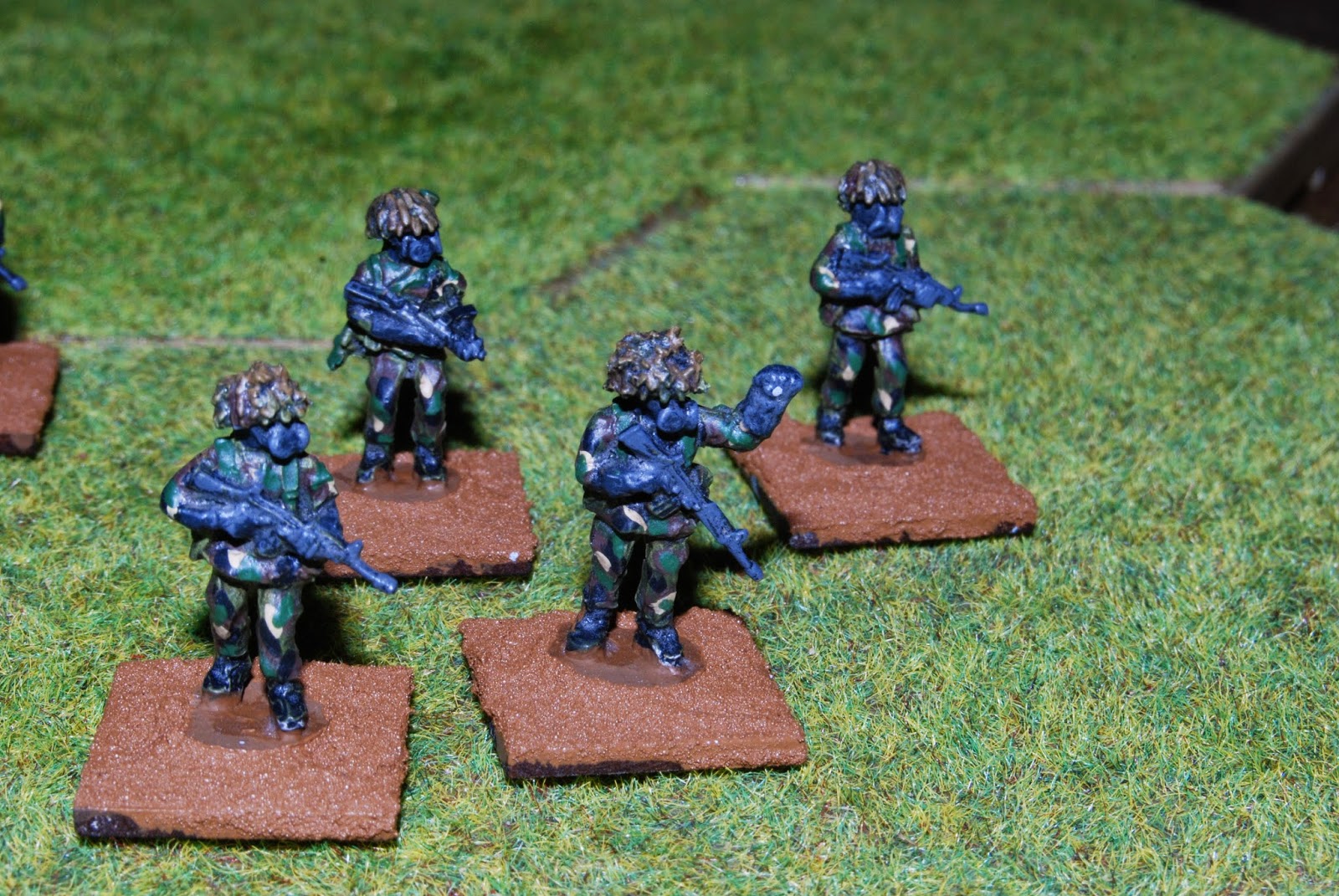 The other half section with GPMG gunner and assistant gunner to the right. 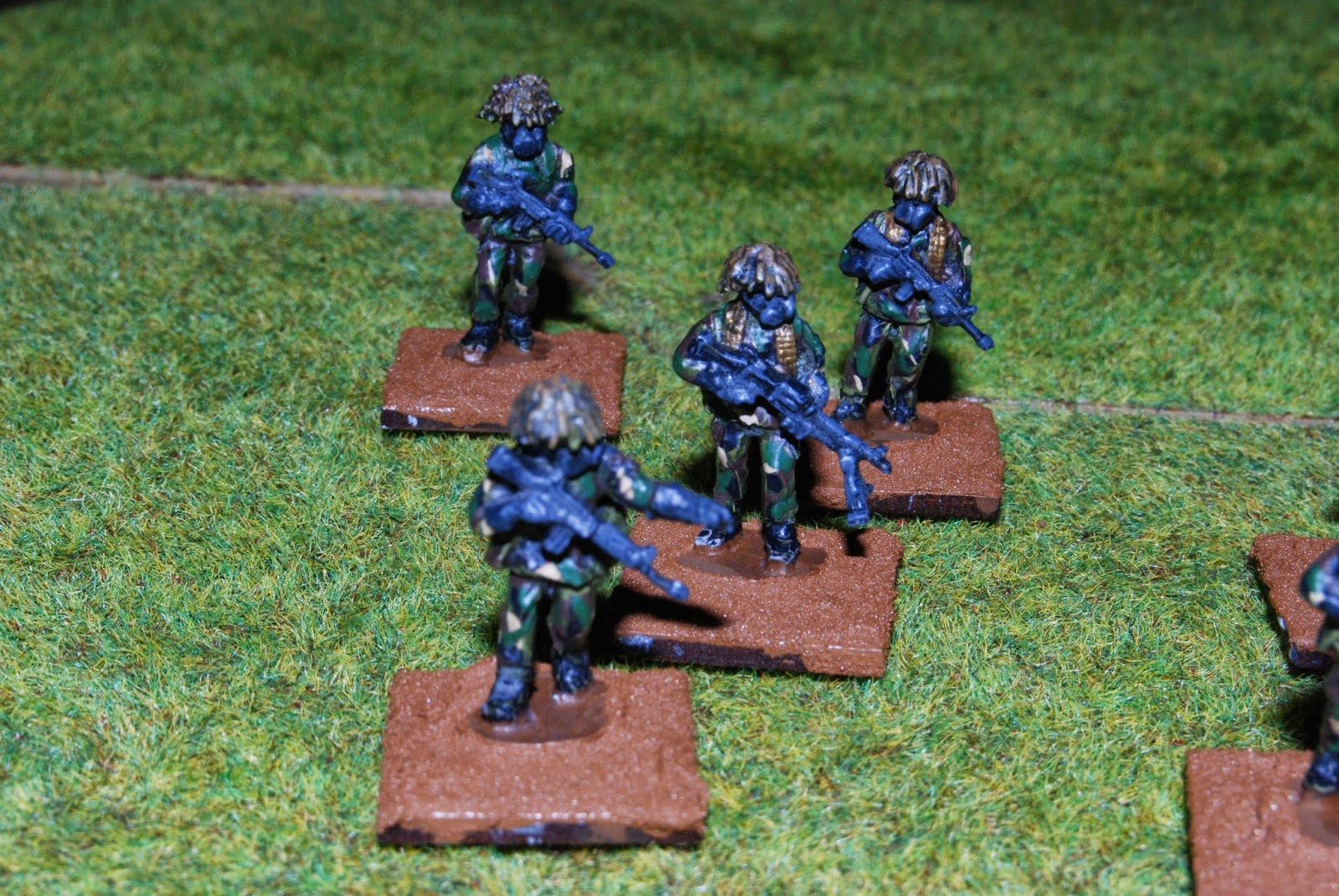 These great looking figures are going to be used for possible urban unrest scenarios, alongside conventional infantry and police figures, as well as Cold War Gone Hot actions.  Lovely looking figures and straightforward to paint up.

Thanks for looking.
Posted by Andy Canham at 08:07 No comments:

Last year I won an Ebay auction for an assortment of modern 15mm figures.  When they arrived, there were a lot of Israelis, Vietnam US forces and various AK-47 troops, mostly from Peterpig.  I added a pack of snipers, command and a couple of general infantry packs and got enough troops for a 3 platoon company.  Each platoon comprises three sections, each with a section leader with AK-47, RPG/AT figure, 2 LMG figures, a designated marksman and three infantrymen with Galil or M16.  Each platoon has a 4 man command element too.

I'm not sure whether I'll mount them in M113 Zeldas, or in Nagma SHOTs. Armoured supports will be from Centurion SHOTs and my toy M48s from Poundstretcher.

Oops, just looked at the photos and realised I still need to paint the helmet straps. 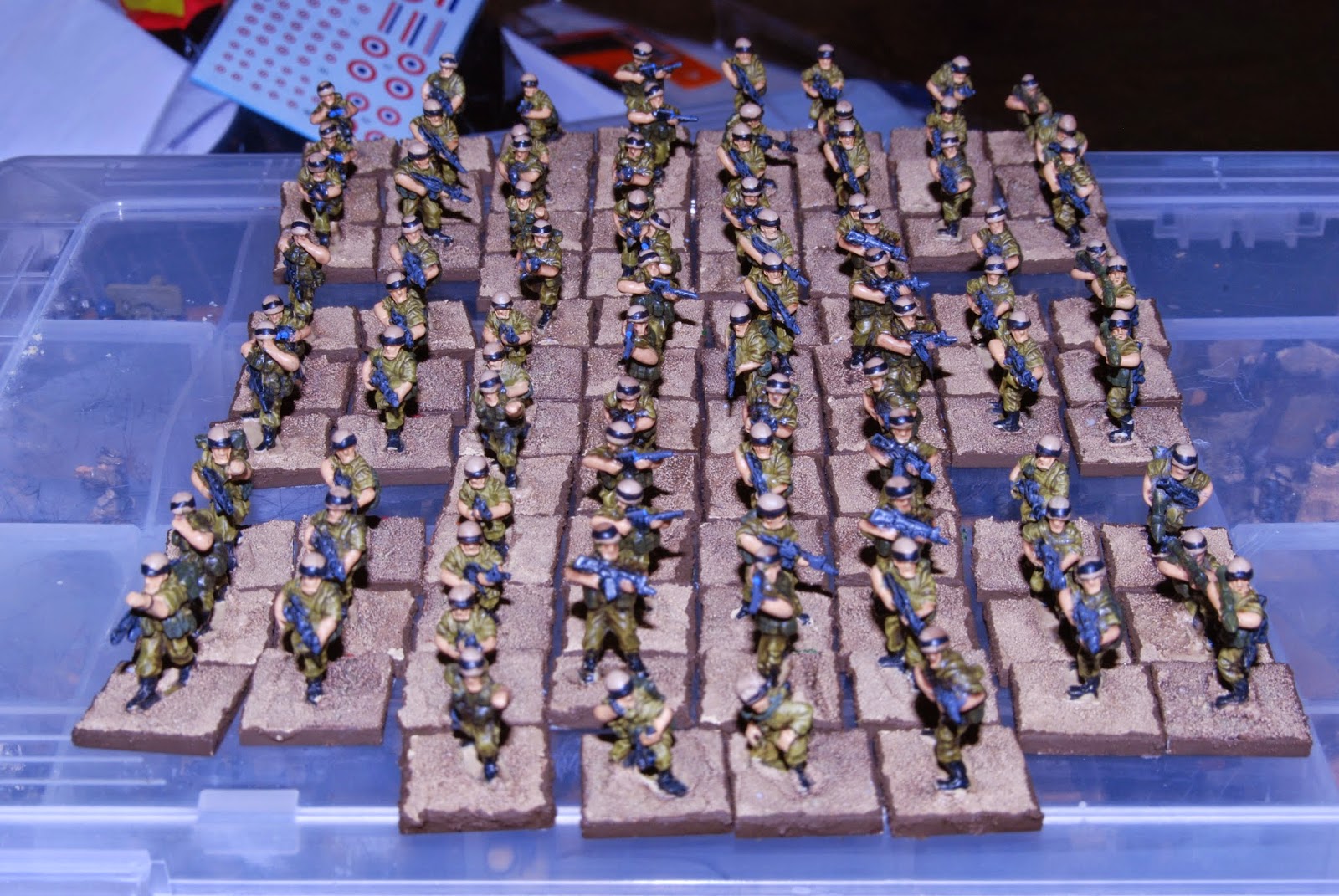 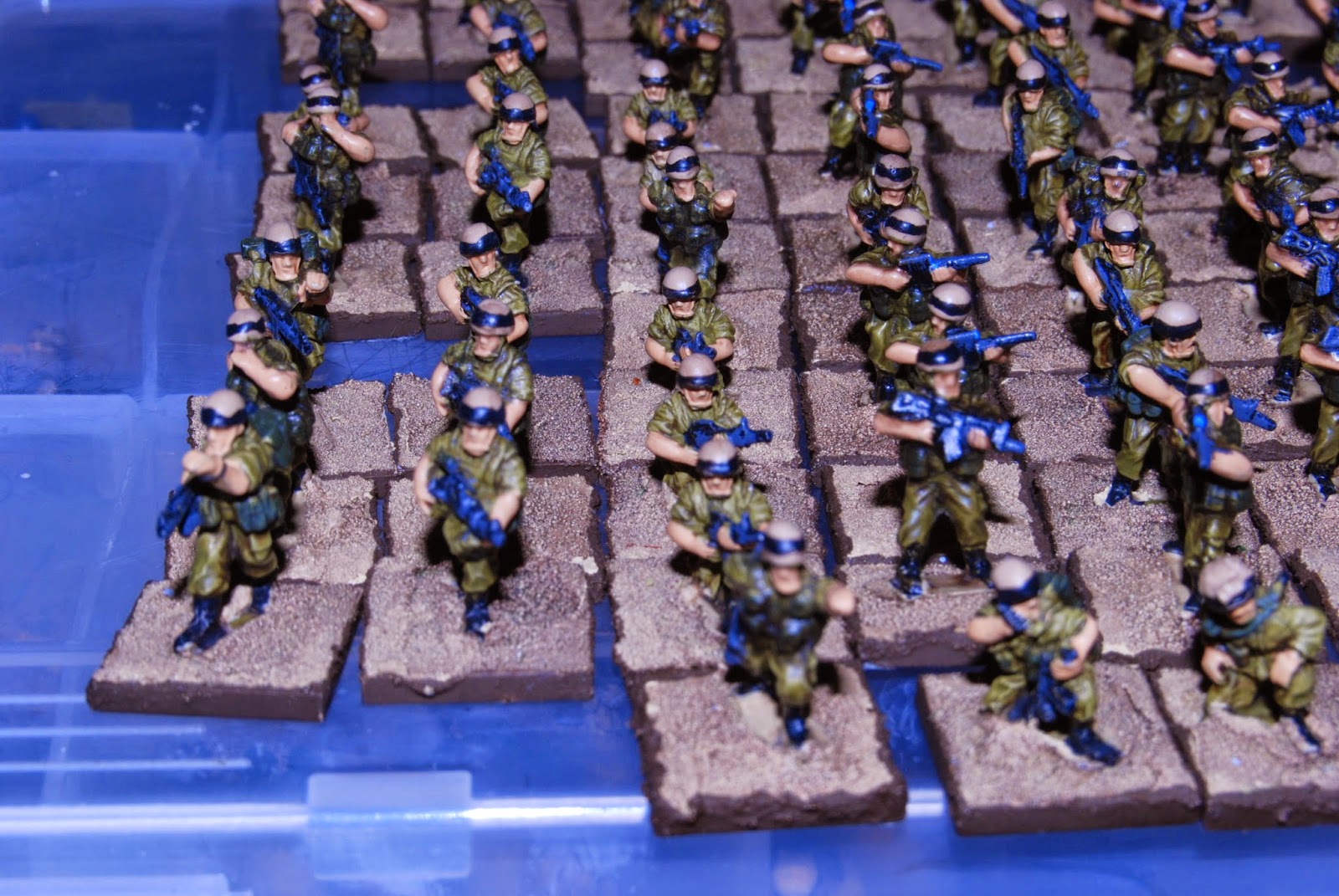 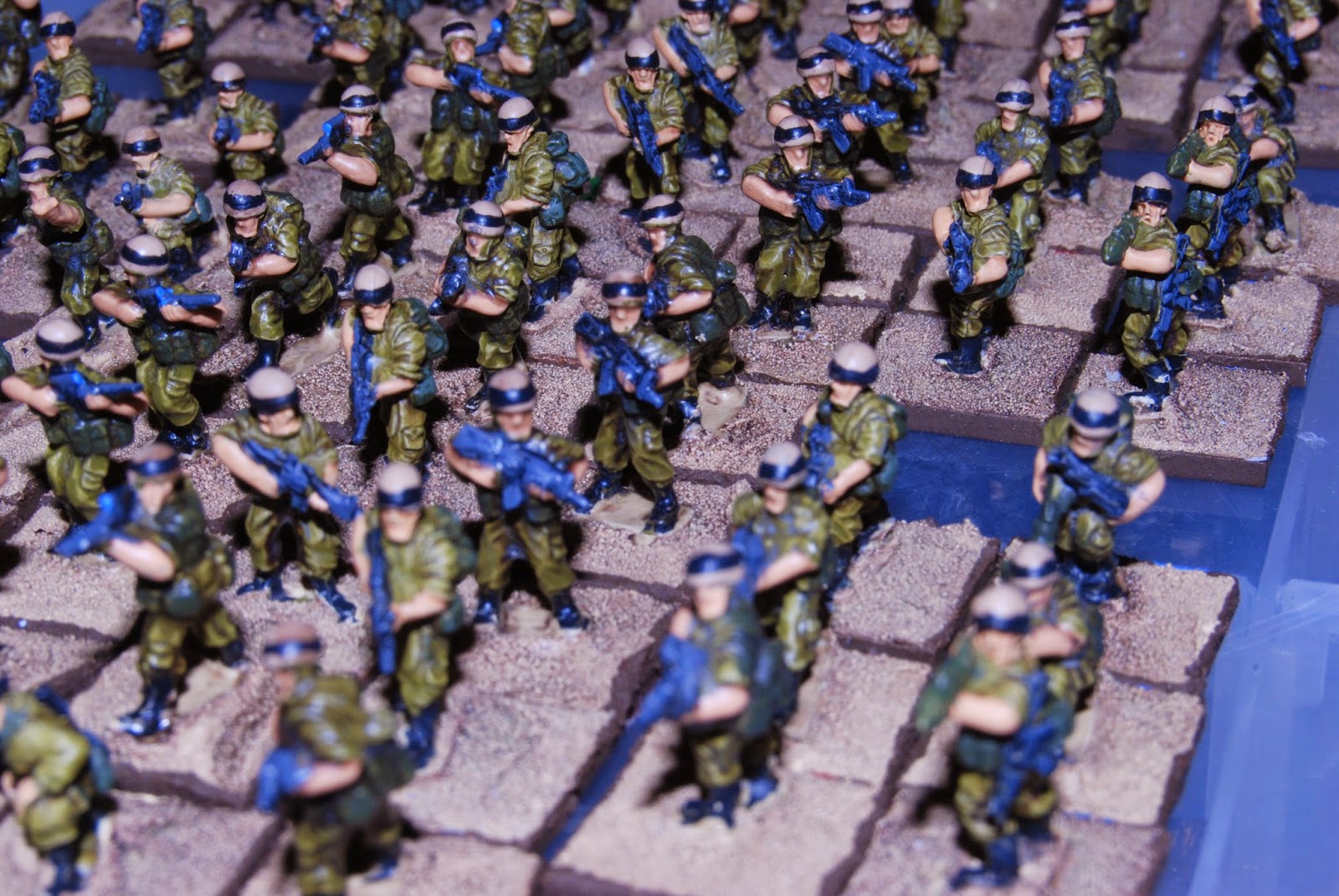 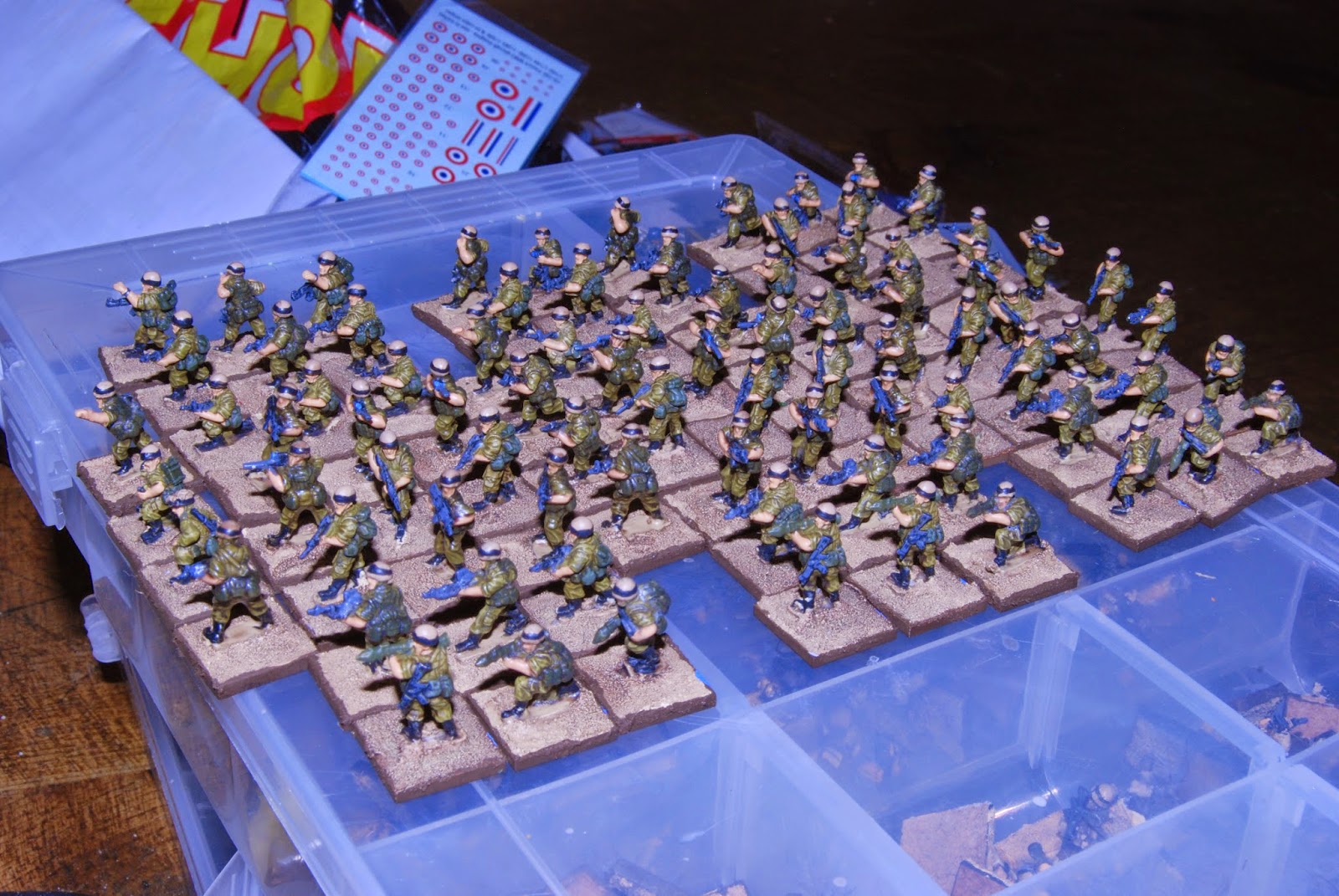 Thanks for looking.
Posted by Andy Canham at 08:11 9 comments: