I played my first game of BG Pacific last Thursday.  Will set up the table and all the terrain and models are his - and very nice they are too.  We played one of the island hopping scenarios, taking the point or getting the point.  This pitted a US marine platoon in Amtraks (in this case LVT-4s), landing on beaches in front of a rocky plateau lined with Japanese pillboxes and armed with two 47mm field guns, an HMG and two LMG teams, guns and HMG with loader teams.  The Japanese also gained a reserve platoon on turn 3 coming on from the right hand table edge (in the photo above).

First turn, Wills marines stormed ashore with two Amtraks scuttling out of the surf and crossing the beach, only for one of my 47mm guns to open up.  A spot, lucky to hit throw of 6 and AP roll of 8 meant one of the Amtraks brewed up with lots of pinned and broken infantry teams bailing out.  This worked quite well as Will dismounted his 60mm mortars from an Amtrak at the edge of the surf and they advanced up the beach, under a timed 81mm mortar strike pretty much on the destroyed Amtrak - more pinning and more misery for the bailed out teams.  Luckily for Will, his second Amtrak on the beach got a successful beyond the call test and motored up to some shelter from the jungle before dismounting his troops. 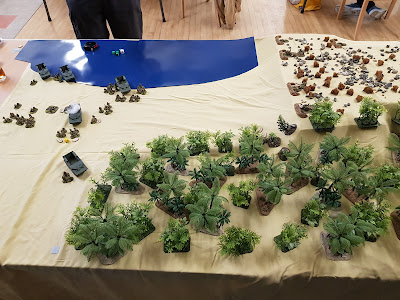 Pinned survivors of the destroyed Amtrak. 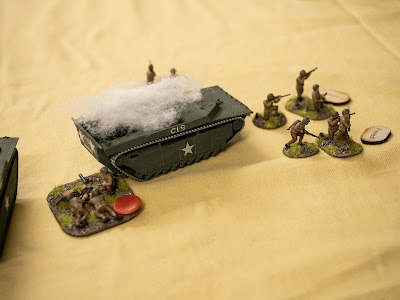 Reinforcements arriving on the edge of the surf. 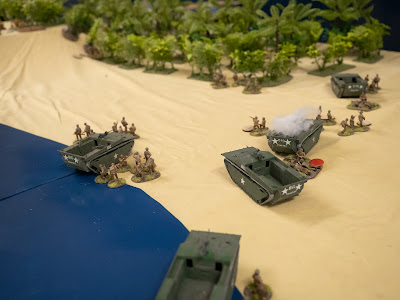 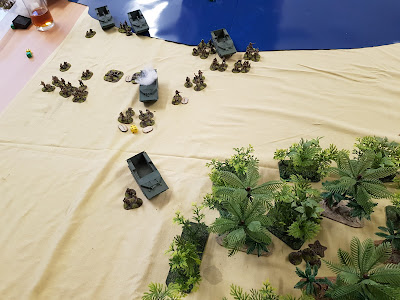 The defenders with their commanding positions on the bluffs overlooking the beach. 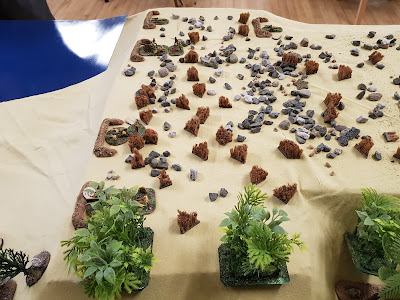 Some of the plucky defenders, the lucky 47mm gun crew that picked off a fully loaded Amtrak. 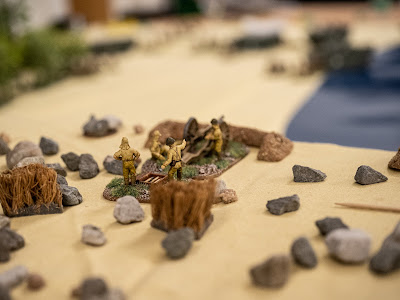 More American marines advance into the jungle and work their way forwards, taking out a sniper team in the process. 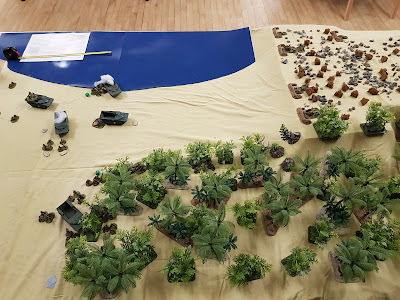 American infantry starting to concentrate for the push into the jungle. 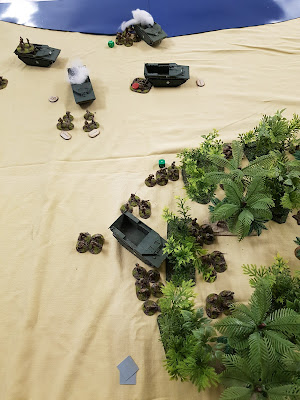 Japanese reinforcements advancing in a skirmish line ready to meet the American infantry as they push forwards. 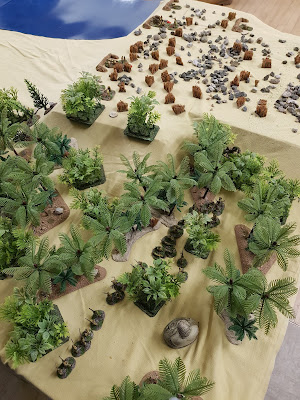 Sadly, we ran out of time, with the Japanese having taken 8 BR losses out of 27 or so, while the Americans were in the mid-20s with a BP in the mid-30s.  Still lots of hard fighting to go, but with so many American infantry units pinned down on the beach and kept there by mortaring pre-registered target points, it seemed only a matter of time.  Not a lot of decisions for the Japanese player in this one, which would make the scenario quite suitable for a solo practice game, basically, the Japanese shoot at anything with a sensible target priority and push their infantry as far through the jungle as possible to prevent the Americans getting up the flanks of the plateau.  Choice of PRTPs is important - its tempting to put one in the jungle rather than having both on the beach.

Lots of fun, thanks to Will for laying the game on and providing such a determined US Marine force.