This month I've been working my way through the Vapnartak haul and a backlog of partially completed models in an attempt to reduce the unpainted stash.

Various units on the workbench (still my kitchen table really). 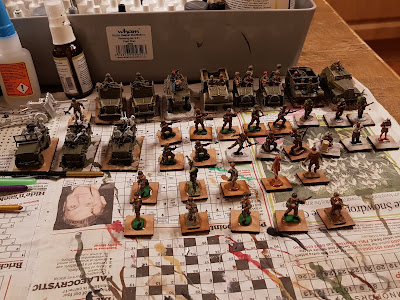 Three jeeps.  On the left an Airfix jeep from the 75mm pack howitzer kit, with SHQ airborne crew.  Centre and right are two SAS jeeps for the European theatre from SHQ, with crew augmented by more SHQ airborne crew. 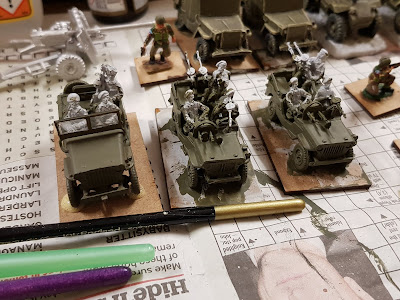 An British paratrooper section with figures from Esci and some original Airfix paratrooper figures dating from the 1960's, based ready for painting (in many cases over much earlier attempts from the past 50 years). 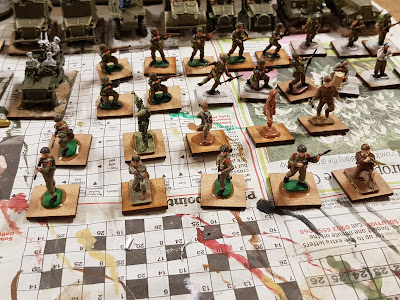 Another paratrooper section, similar mix of figures, but these are ready for varnish coats. 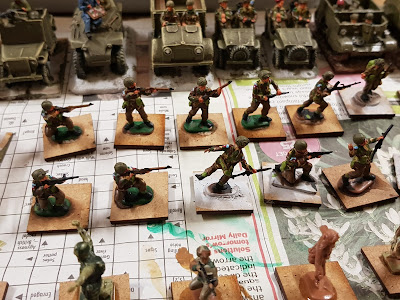 Two three figure FHQ groups from SHQ, at the back in khaki and suitable for Italy or NW Europe and in front for the Mediterranean theatre.  The Mediterranean theatre group includes an officer in shorts, sandles and shemagh or keffiyeh, reading a book, another in a cricket jumper with radio headset and carrying a cornishware mug of tea, and a sitting radio operator. 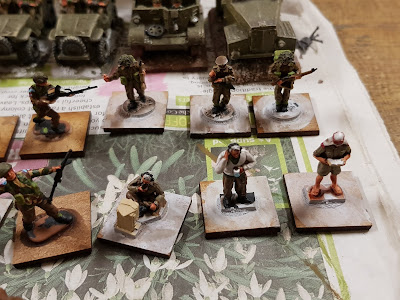 Vehicles in need of decals and varnish, left to right, two Ready2roll airborne jeeps bought at Vapnartak, and SHQ airborne carrier and a Ready2roll Humber Light Recce Car (bought at Vapa in 2019). 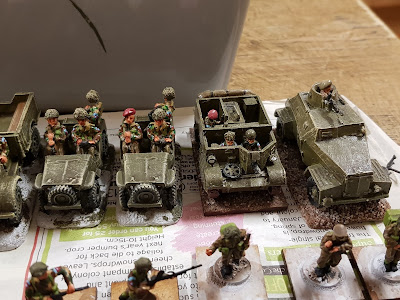 More vehicles, left to right, two US armoured jeeps from EWM, a Ready2roll Humber Scout Car with AB figures RAF liaison officer sitting atop the hull (courtesy of meeting Tony Barton at Salute 2019), and a Bedford 15cwt truck with head swops from Esci figures as an airborne 17pdr tow. 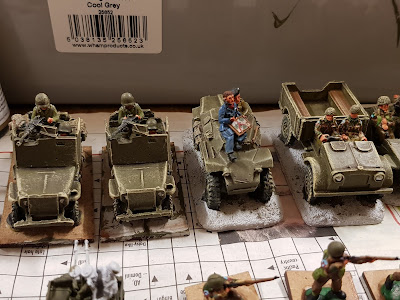 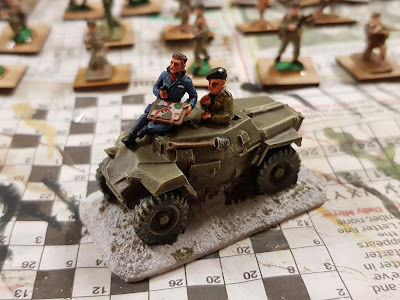 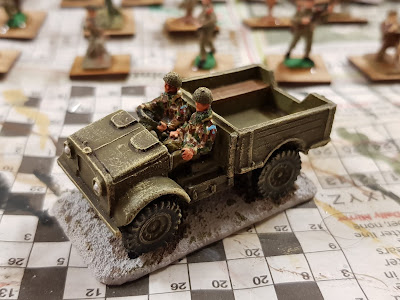 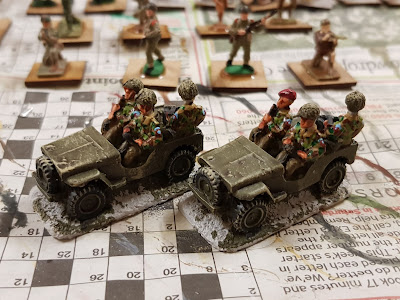 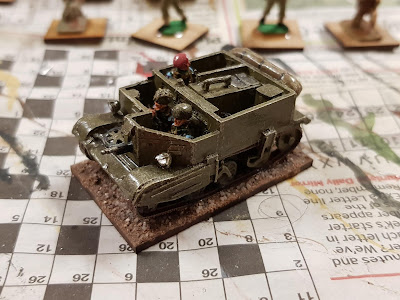 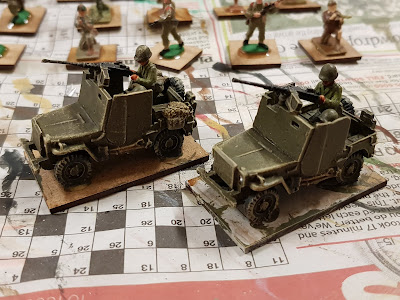 A blast from the past, one of my childhood toys from the 60's painted up.  The lack of appropriate WW2 webbing has been attempted by painting the large chest pockets as if they were ammo pouches and adding webbing straps in the same colour.  Hoping for the best with the weapon that it looks like a Thompson, even those they were rarely issued to the airborne, stens being preferred.  Still, nice to see an old playmate still in use.  I just hope the brittle plastic holds out, unlike quite a few of his contempories. 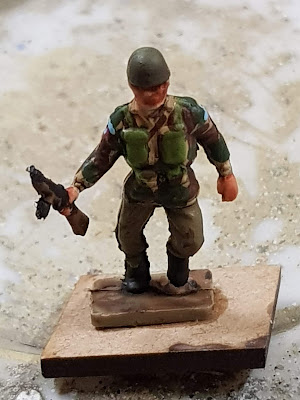 As ever, thanks for looking.
Posted by Andy Canham at 21:49 2 comments:

Some time ago now I picked up a box of plastic Saga Late Roman infantry.  I bought a Scotti Saga army at Gauntlet in the summer, so figured I could get some games in with a sub-Roman mini campaign involving a Roman field force, Scotti and Anglo-Danish army (masquerading as Saxons minus the Dane axes).  In the run-up to Christmas I made a start on the Romans. 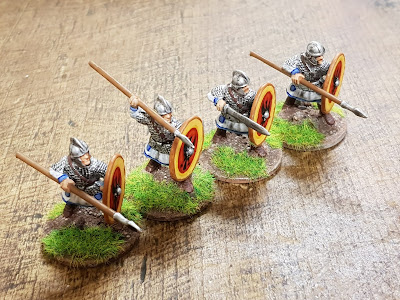 Another unit of armoured legionaries. 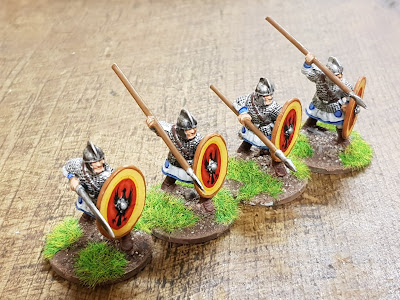 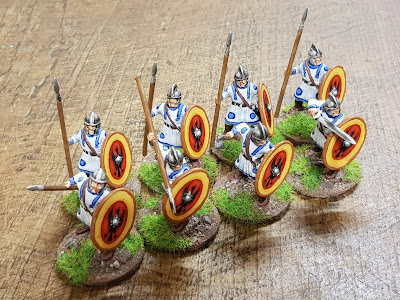 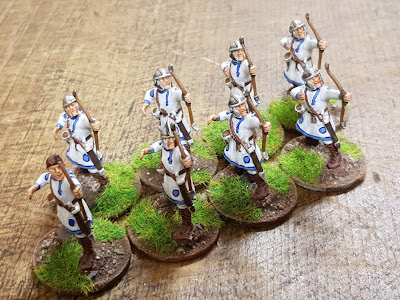 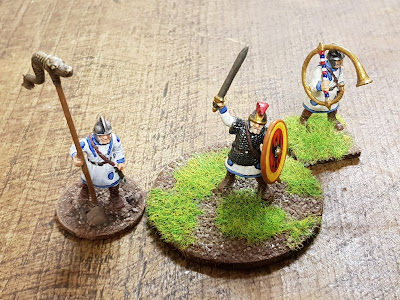 The army so far. 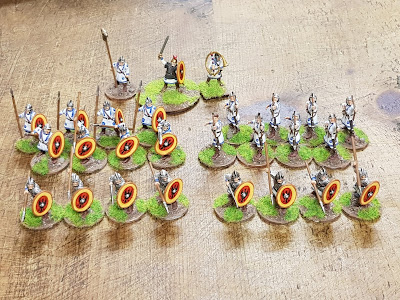 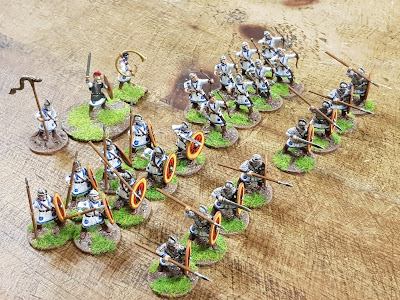 So, I still have a unit of unarmoured legionaries and a unit of archers to paint.  I also bought a Gripping Beast box of 12 Late Roman light horse, assembling 6 as mounted archers and 6 as javelin armed.  Then I also bought some metal heavy cavalry, enough for a unit of heavy armoured cavalry and a unit of unarmoured medium cavalry.  I also plan to add a unit of super-heavy cataphract horse to the army as well.  I'm also tempted to add a box of Gripping Beast Dark Age warriors to use as Limitani in a Late Roman force or as sub-Roman Britons with some Arthurian cavalry.  Not sure how far down the route I'll go as I'm also keen to get a 20mm force organised for Battlegroup Pacific due out later this year (thinking USMC) and I want some 28mm Muskets and Tomohawks or pirates figures for at least one game of Sharpe Practice next year, set in an imaginary Indian Ocean.