Some of the Cold War Commanders managed a get together to play a socially distanced wargame in a well ventilated room between players who had all had both jabs.  A nice scenario pitting three NATO brigades carrying out an opportunistic spoiling attack on a degraded Soviet and Czech troops.  In the photo below, Canadian (far left), German (middle left) and French (near left) were advancing left to right on hastily dug in Soviet (far right) and Czech (near right) defenders. 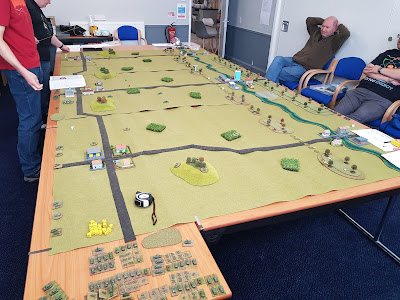 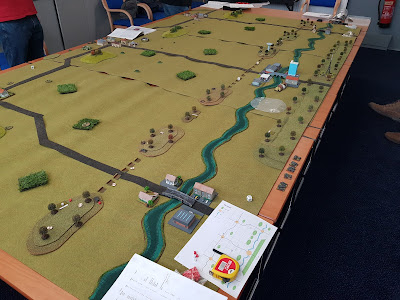 After an initial couple of turns of programmed artillery fire and scouts moving and spotting, the first hidden pact troops were spotted and NATO advances their initial forces (two battalions up and one in reserve, awaiting the identification and degrading of key pact strongpoints).  Initial French advances (nearest the camera) were great, especially on the right flank where a mechanised battalion seemed particularly full of elan. 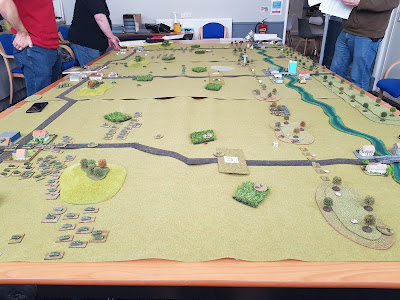 However, they were advancing on an apparently empty terrain (the hills in the foreground had just been swept by a particularly effective French artillery strike by a regiment of 155mm SPGs, wiping out a Czech AT company. 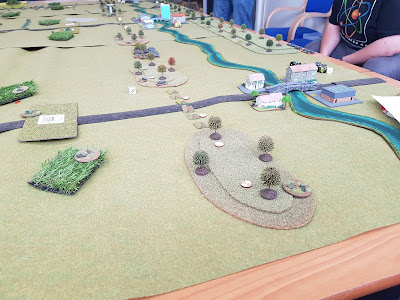 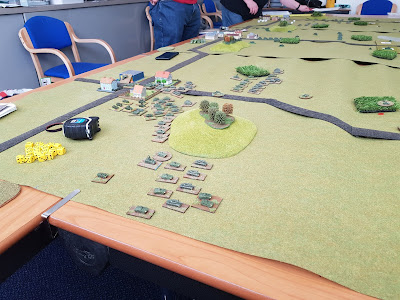 The French attempts to sweep around the hill to their front was a slow affair, not helped by programmed artillery hitting the crossroads in the village on the left, which pinned one of the cuirassier battlegroups. 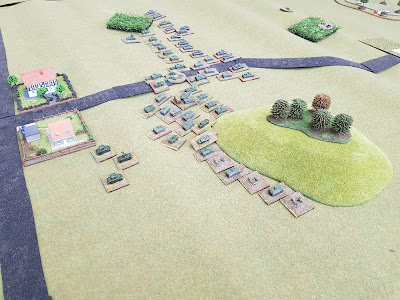 The French mechanised battlegroup exhibiting wreckless elan - the fields to the right of the minefield were a programmed artillery point. 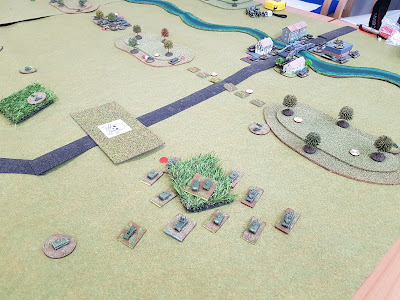 Czech defenders rush into the town to defend the crossing point, just in time to make the weak French mechanised battlegroup pause for thought. 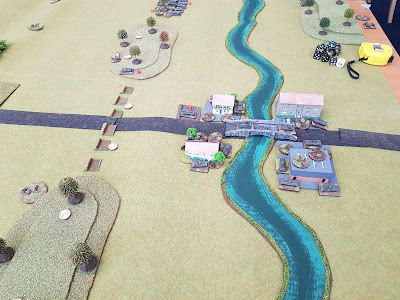 Another cluster of Czechs attempting to pour flanking fire into the Germans to their right front, but doing so in the face of two squadrons of cuirassiers. 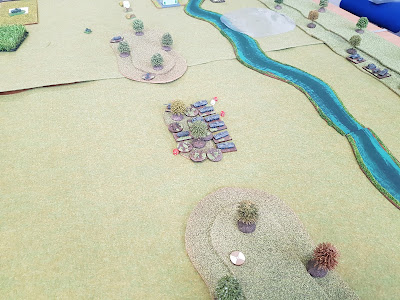 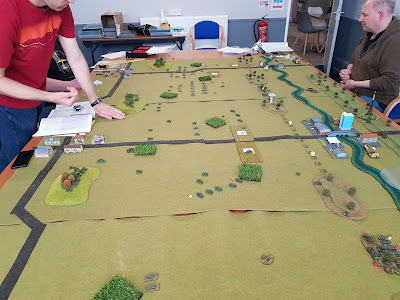 The final positions around 4pm on the day.  The French trying to get a move on, but failing command roles or blundering.  The cuirassiers beyond the road did get some telling fire into the Czech tanks and ATGMs supporting the infantry battlegroup in the woods in the distance.  The mechanised battlegroup nearest the camera were trading shots with tanks on the edge of the built up area around the river crossing. 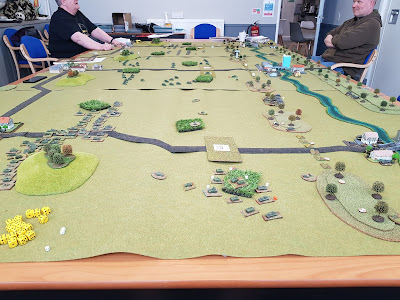 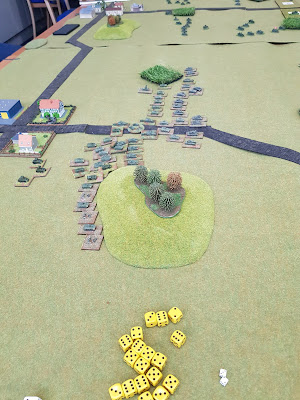 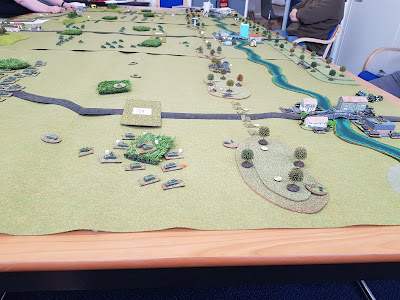 Sadly, too few turns, but mainly due to us having a great laugh and enjoying the company of like-minded wargamers, something we've sorely missed in the last 18 months or so.
Nice to get the toys out on the table and a great venue for weekend gaming - one we hope to use again very soon.
Thanks for looking.

I wanted some artillery tows, able to tow light weapons like the PAK 36, 20mm AA gun and 75mm infantry gun, so the SdKfz 10 fits the bill.  I also wanted to provide tows for a pair of 105mm howitzers, that would also be able to tow heavier PAK AT guns such as the PAK 38 and PAK 40 and a heavy tow for the 88mm FLAK gun, so SdKfz 11s seemed appropriate.  Finally, I wanted a tow for the 88mm FLAK gun, so an SdKfz 7 seemed called for.  All are available in resin from Britannia Miniatures from Grubby Tanks.

A pair of Britannia Miniatures SdKfz 11 medium artillery rows, suitable for towing weapons like the 105mm howitzer.  Britannia SS drivers and a couple of the SS vehicle crew.  These can tow a pair of 105mm howitzers or Pak 38 or 40 AT guns. 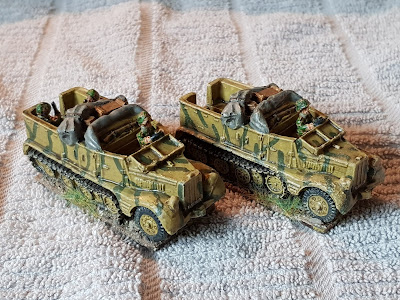 Painted in middlestone with a little Iraqi sand and stripes of WW2 German field grey with a little refractive green.  Black grey for tires, black brown for tracks. 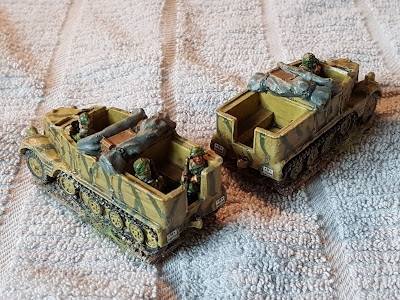 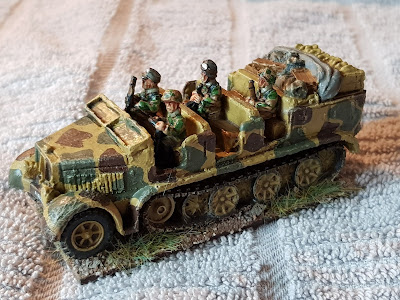 The casting on this model wasn't particularly crisp and took a lot of filling with modelling paste.  I'm very happy with the final result though. 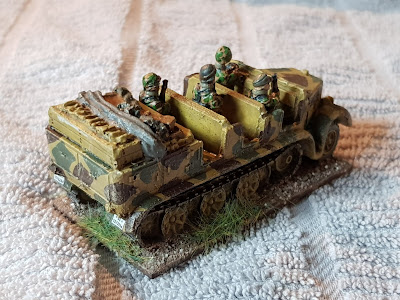 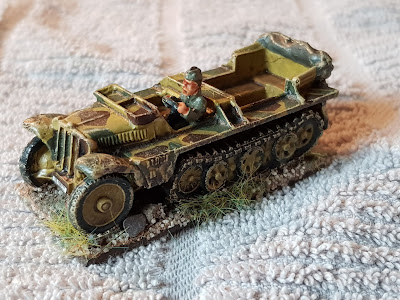 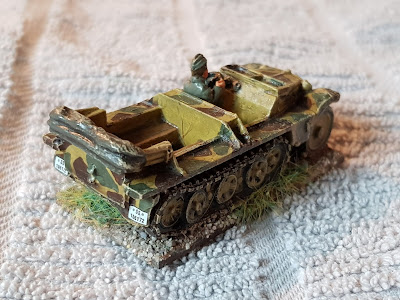 Nicely detailed models, a few bubbles to fill and some make good work around the headlights and grills mainly, but overall quite pleased with these.  They fill a gap in my late war German forces to get towed artillery mobile, so do the job.

A Ready to roll version of the Marder III M, the last variant to be produced, effectively a PAK 40 on a Pz 38t chassis, with the fighting deck lowered compared to other variants due to the forward positioning of the engine. 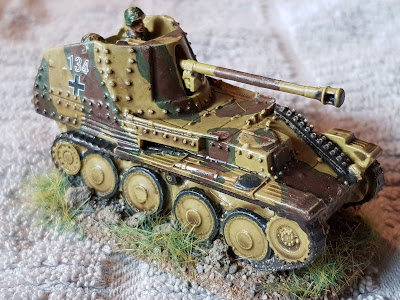 I've painted this using Vallejo Middlestone lightened with Iraqi sand, with stripes of WW2 German field grey mixed with refractive green and Armor brown lightened with light brown.  The brown swatches are overpainted on the green grey, leaving the green grey as margins of variable width.  Tires, gun muzzle, bore and spade blades are black grey, tracks are German camo black brown.  Exhaust is rust, wooden tool handles are new wood.  Vehicle is washed in Agrax Earthshade and dry-brushed with Vallejo Iraqi sand.  Galleria gloss varnish was added as a protective layer before the decals went on, followed by Galleria matt varnish to seal the decals and provide a matt finish. 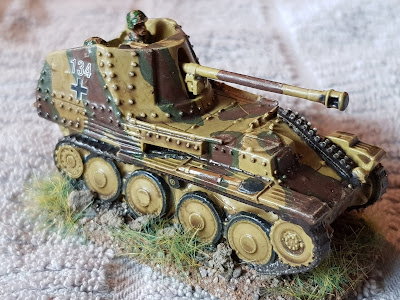 Decals are from Skytrex. 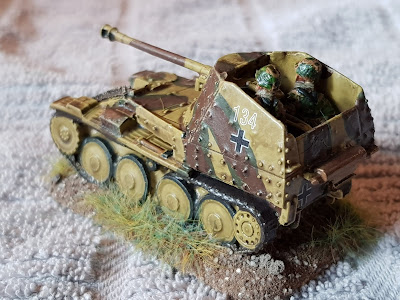 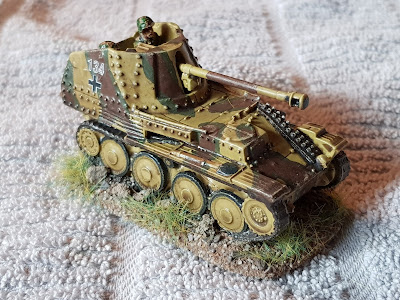 Crew are from Grubby (Britannia Miniatures range) from different crew sets.  They are painted in a spring oak leaf camo pattern using the Farnsworth guide for paint palate suggestions. 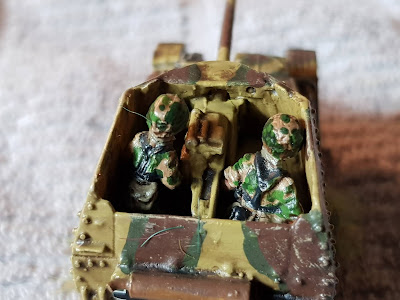 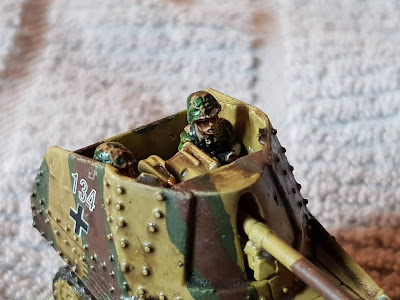 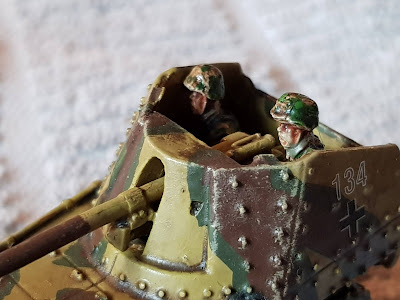 I'll add a second of these next time I order, to give me a Rapid-Fire AT unit.
As ever, thanks for looking.

A First to fight SdKfz 221 painted in late war colours.  The commander is a Britannia DAK tank commander and he is painted in the Telo mimetico Italian scheme used by the German army after the Italian armistice.

This is a nice little kit of what was, by 1944, a pretty much obsolete vehicle, still pressed into service in some units for anti-partisan, battlegroup recce and liaison duties.  An SdKfz 223 with bed frame aerial is listed in the R-F Normandy Battlegroup book attached to the Battlegroup HQ of a panzergrenadier division. 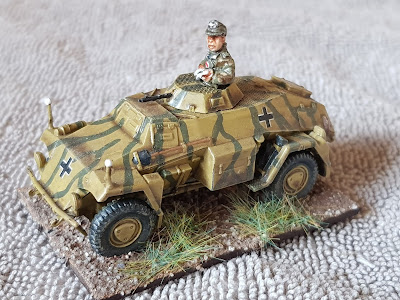 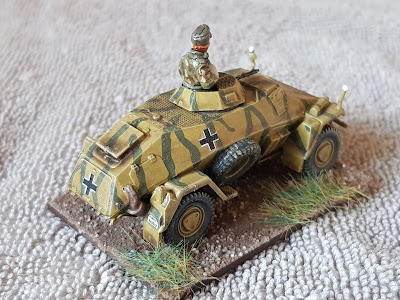 I've given the commander an Iron Cross ribbon on the front of his tunic. 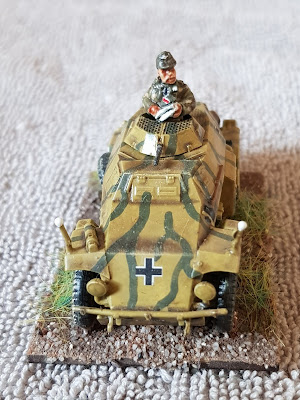 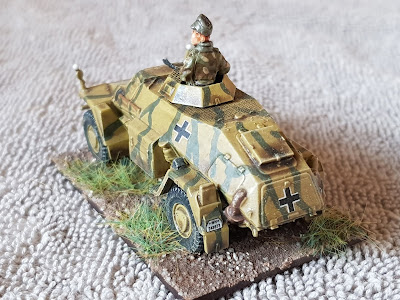