Here are some more of the Caesar late WW1 German figures.  The riflemen at the back and the officer I've posted before, but thought they were a bit dark, so I've added some more painted in a lighter grey green and field grey mix, which I think looks a lot better.  I might try a couple of figures with the multi-colour patterned helmets, but that does restrict them to the last couple of months of the war and post-war Freikorps, etc. 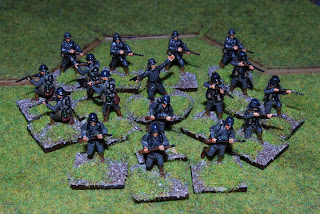 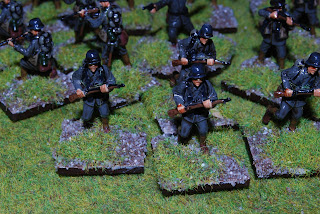 One of the figure poses in more detail showing front and back views. 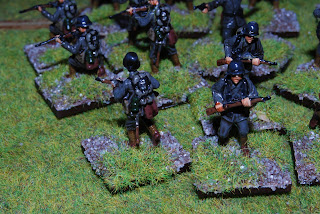 Darker finish on the figure on the left, lighter on the right. 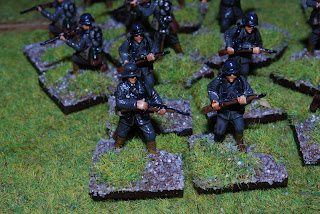 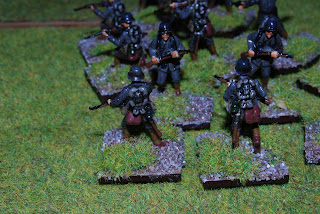 They all work, but I'm much happier with the lighter finish, albeit it's a subtle difference.  I have another box and a half of these to finish off now.

This figure was a very kind gift from Will McNally (http://willwarweb.blogspot.co.uk/).  I'm not sure what set he comes from, something Colonial/Sudan/NW Frontier (unfortunately I can't check at the moment as Plastic Soldier Review seems to be off-line).  He's perfect for my WW1 desert force, representing British and Empire forces in Palestine, Mesopotamia and, potentially, Southern Russia.  I suspect he's going to be the C-in-C for British Empire forces in Andreivia. 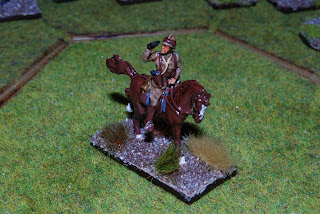 I've painted him in a similar way to my Indian Army British and Sikh troops.  Base khaki grey, heavily dry brushed Iraqi Sand and washed in Agrax Earthshade.  The horse is painted what is fast becoming my preferred version of Chestnut, a base of Mahogany with Agrax Earthshade wash and Ivory hooves/socks. 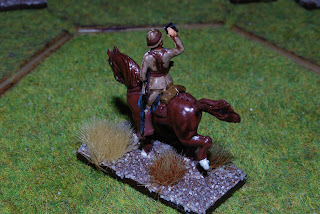 I managed to finish off a couple more test figures in the run up to Christmas, so will try and post these before the year runs out.  Hope you've all had a great Christmas.  Thanks for looking.
Posted by Andy Canham at 12:14 No comments:

Well, I should be at the Defenders Xmas do tonight, but as I'm not feeling well, I thought I might as well share some more photos of the WW1 kit I'm working on at the moment.

First up is an Emhar Mark IV Female tank.  The kit was relatively straightforward to complete and looks good, although the "roll bar" on the roof should have two supporting struts but they are only modelled with one (ironically the box cover art shows the correct arrangement). 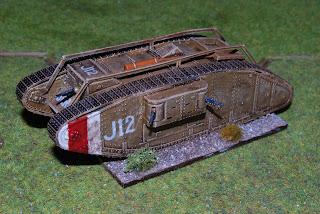 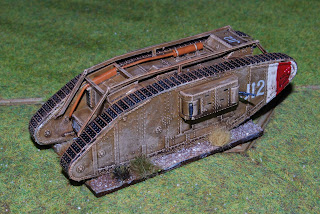 Decals from the kit included J12, Jericho, which I thought looked suitable.  There are some interesting beute tank markings for captured tanks in German service, which include skull and cross bones that are going on another vehicle. 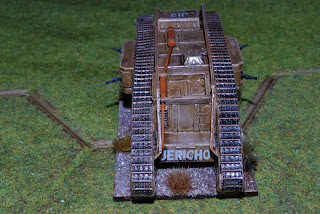 Not bad for a kit picked up at a bring n buy table at the Derby/Castle Donnington show for £2.  Bargain! 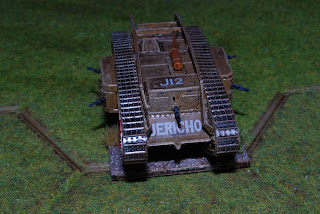 Next up I a try out of some late war German figures from Ceasar, picked up at the same show for £1 per box.  These are painted in a 50:50 mix of field grey and german grey with khaki grey puttees, saddle brown boots and pouches, German grey bandoleers and black belts, with German camo beige grenade/ammo bags, washed in Agrax earthshade.  They still seem to be a bit dark to me, I'll try and lighten the next batch. 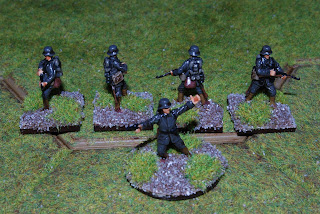 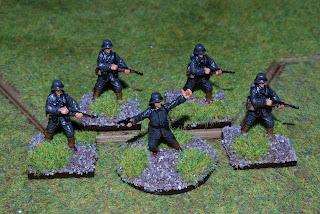 Then I experimented with an early war figure in Picklehaube - an old Airfix figure from the early 70's.  Field grey and mid-grey tunic and German uniform and mid-grey trousers, both lightened with Ivory.  Saddle brown boots, webbing and pouches.  German camo beige helmet cover and flat red regimental sign on helmet and piping on tunic.  I quite like the way he looks. 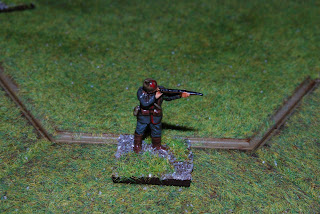 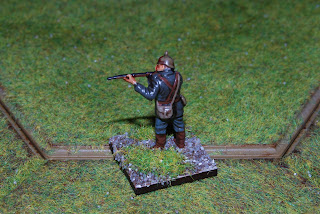 Finally, as a try out, this is another early 70's vintage Airfix WW1 soldier, painted in field blue with mid-grey tousers, grey-blue puttees and water bottle and saddle brown webbing and pouches, with a German camo beige bread bag.  All washed in Agrax earthshade, but then I highlighted the field blue as it turned a more khaki colour than I liked. 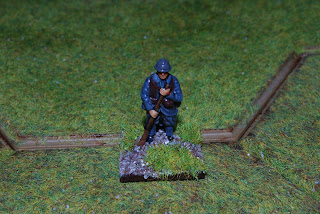 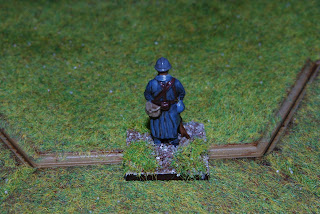 Again, I quite like the look of the French soldier, so will try the same technique on a few more figures.

Thanks for looking.
Posted by Andy Canham at 20:17 2 comments:

Another unit of Cossacks for WW1, the Russian Civil War and Andreivia.  These are the Strelets set of WW1 Don Cossacks in summer dress.  Nice figures, minimal flash, just a pain to free up the two levelled lances from the sprue for the two figures in the front row. 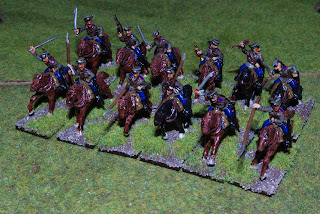 These guys wear a grey-green uniform jacket and hat, with dark blue trousers with red stripe.  All are washed in GW Agrax earthshade to pick out details and blend the colours. 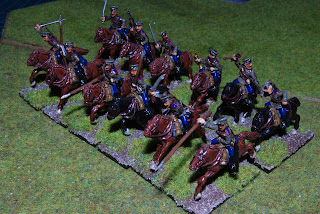 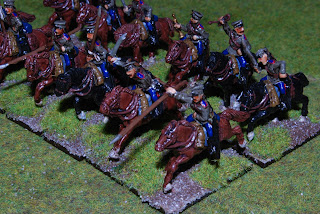 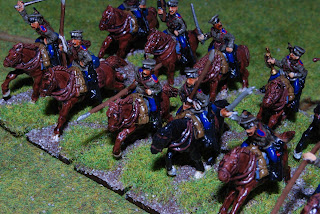 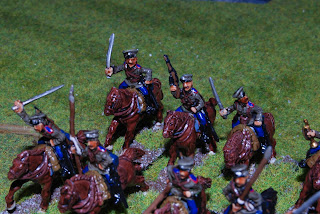 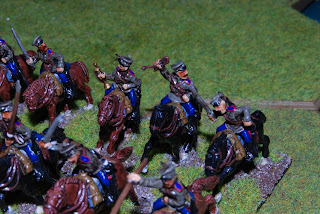 A final view of the unit. 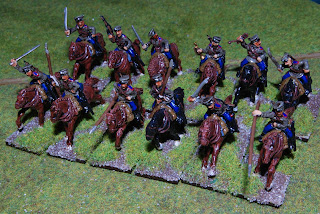 Looking forward to seeing these on the tabletop in Andreivia.

Thanks for looking.
Posted by Andy Canham at 23:17 2 comments:

Some mobility for the forces of the British Empire in the form of mounted Imperial Yeomanry, courtesy of the Australian Light Horse.  These are from the Hat set, which provides enough dismounted figures for three four-man sections, three men armed with carbines and a fourth horse holder, although only enough standing horses are supplied for two horses, rather than the four each should have.  There are enough mounted figures with carbones or open hands that will take a carbine to provide three mounted sections as well.  There are also enough charging figures with bayonet (three) to replace a carbine armed rider with a bayonet, to show they are charging into hand-to-hand combat.

In the image below, the front groups comprise the three dismounted sections with horse holders behind.  Behind them are three mounted sections, with the three figures charging with bayonets at the rear. 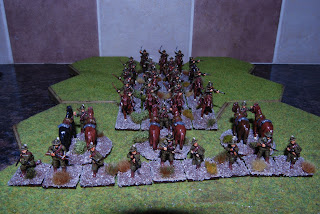 One of the three dismounted sections. 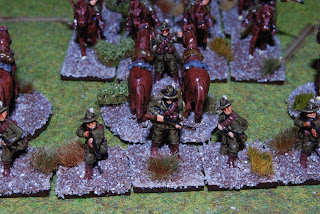 Another view showing the horse holder from the side. 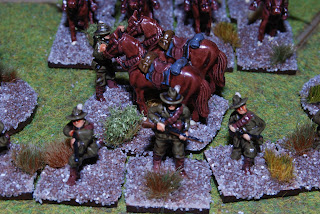 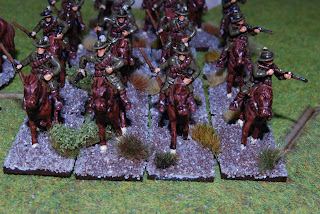 A mounted section showing the charging figure with bayonet drawn. 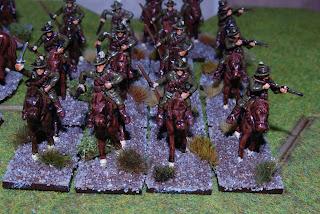 These will find their way into Great War scenarios in the Middle East, as well as in Allied intervention forces during the Russian Civil War and they will, of course, be available for Andreivia.

Thanks for looking.
Posted by Andy Canham at 21:36 No comments: