﻿
With it being the year end and time to look back on 2018, I thought I'd look again at my 20mm German infantry for WW2.  At the start of the year, almost all my WW2 kit was in 15mm or 6mm scales.  However, I had two big incentives to get some completed as a) I had a Battlegroup Market Garden gaming weekend coming up in May and b) I had picked up lots of 1/72 plastic figures, plus some SS infantry from Britannia Miniatures/Grubby Tanks.
The core of my BG Market Garden force was going to be an armoured infantry reconnaissance platoon - actually from the Wacht am Rhein book but allowed as they were used extensively around Arnhem.  I decided to create a unit based on a recce platoon from 9th SS Armoured Division.  This comprised 4 Sdkfz 250/1 armoured half tracks, each carrying a 4 man MG34 squad, a command 250/1 carrying a 2 man command team, 2 man panzershrek team and 2 man stretcher bearer team and a 250/10 mounting a PAK36.  I also provided some additional support units in the form of a PAK 40 with Maultier tow, a tripod mounted MG34 with 3 crew mounted in an Sdkfz 251/1 and an Sdkfz 250/8 with 75mm short barrelled howitzer.  Recce options included sn Sdkfz 222, an Sdkfz 250/9 and a sniper (not shown).  Artillery support was controlled by a 2 man FAO in Kubelwagen and the platoon was supported by up to 5 Stug III Gs (excellent value for money pointswise).  Finally, an Opel Blitz truck provides a supply column.  So, an infantry force but only with 30 figures, including 2 observers and 6 figures manning the tripod MG34 and PAK40.  Up against lightly armed airborne troops they were as good as light armour, albeit a little more vulnerable to plunging fire and the 4 man MG team dismounts could be quite brittle, but the unit puts out a lot of firepower.
﻿ 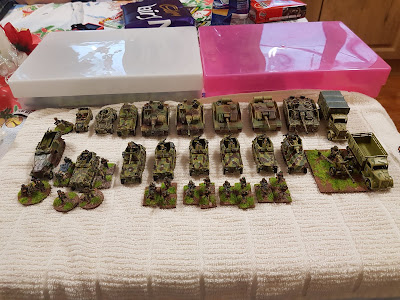 The main infantry teeth of the platoon, each 4 man team carries an MG34 and a Panzerfaust.  The PAK36 needs to get right up close to kill and serious armour, but is quite effective against half tracks and light airborne vehicles.  The command team of 2 men, Panzershrek team of 2 men and 2 man stretcher bearer teams are very vulnerable, especially if the transport is destroyed (if the vehicle is lost and the d3 hits are distributed 1 per 2 man team, then all will break due to last man standing and the aautomatic pin caused by the loss of the vehicle - oops, that's 4 tokens to take. 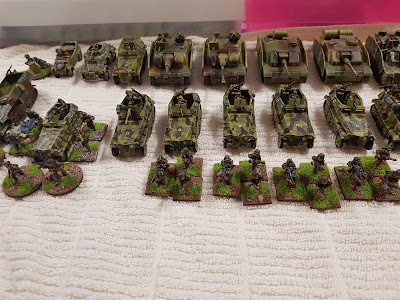 The command 250/1 carrying three 2 man teams, plus the Sdkfz 251/1 with tripod MG34 - which can put out a lot of firepower given the chance.  In the background is the FAO and Kubelwagen transport, Sdkfz 222 and 250/9, the former being much more survivable as it is not classed as open topped in the BG rulesets, which the 250/9 is, despite them having effectively the same turret arrangement. 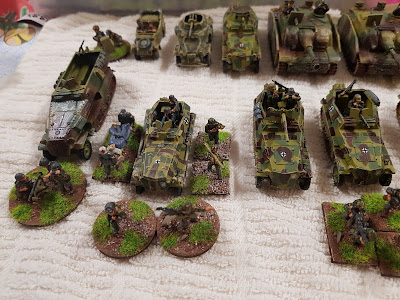 Stug IIIG support, 2 from Britannia/Grubby, 2 Armourfast and a PSC version.  These are tough little beasts, difficult to kill and they pack a good anti-armour punch as well as effective pintle MG34 fire.  Great for taking on those pesky large US airborne infantry squads. 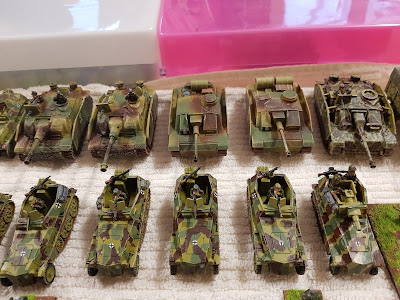 Fire support from the Sdkfz 250/8 75mm howitzer, PAK 40 with Maultier tow and, at the back, an Opel Blitz supply truck. 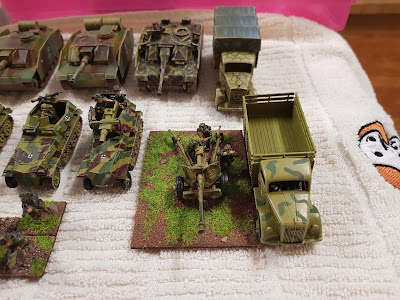 Having got to grips with a camo smock pattern that I liked for the Britannia/Grubby Panzergrenadiers, I decided to do a fully Gepanzert platoon in Sdkfz 251/1s.  I used the Armourfast vehicle sets with additional modifications from Early War Miniatures.  The 3 main rifle sections each comprise a 5 man rifle squad and a 3 man MG34 team, carried in a 251/1.  The 6 man command section is carried by an Sdkfz 251/10 with a PAK 36.  They are supported by an MG34 team in a 251/1 and a PAK 40 towed by a 251/1.  At the back is an Armorfast Sdkfz 251/9 Stummel 75mm howitzer, 2 Armorfast Jagdpanthers and three Panthers, 2 from PSC and 1 Britannia/Grubby, with a supply column Opel Blitz truck from PSC.  Front right is an Armourfast Sdkfz 251/1 modified with an EWM kit as a 251/3 command transport, with dismounted FHQ stand using Britannia figures. 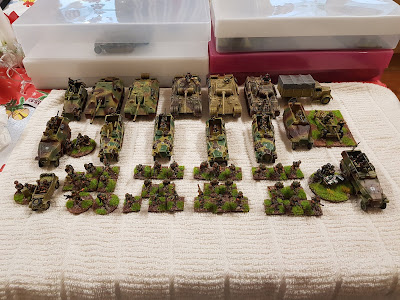 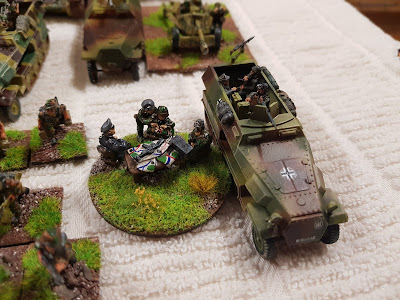 The teeth arm of the platoon, three sections, each a 5 man rifle squad and a 3 man MG 34 team, plus a 6 man command team, all from Britannia/Grubby. 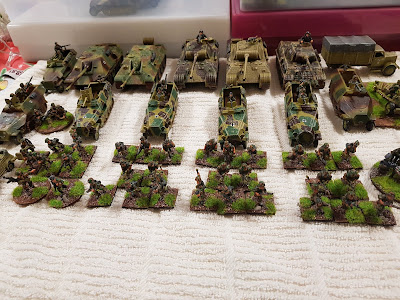 The tripod MG34 support team with 75mm Stummel and 2 Jagdpanthers behind.  Firing long range at targets to their front can be devastating for the Jagdpanthers, especially when lurking in woods or town ruins. 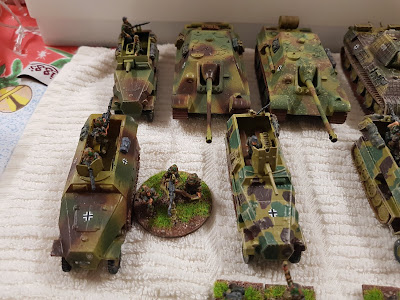 Panthers, pack a real punch and are heavily armoured to the front, but expensive and vulnerable from the flanks! 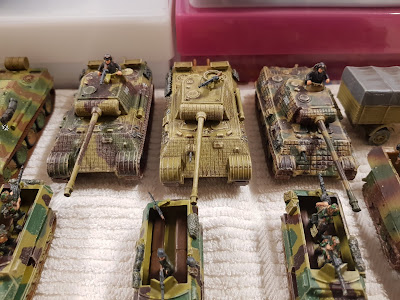 PAK 40 and 251/1 tow both from Britannia/Grubby, with a PSC Opel Blitz supply truck behind. 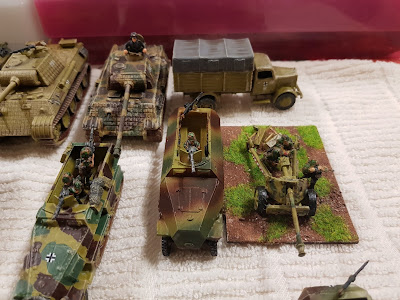 Engineering support for either platoon, mostly from Britannia/Grubby.  On the left an Sdkfz 251/16 Flammpanzerwagen, capable of firing flame out of both sides, twice each turn.  I made good use of this clearing a town of 30 corps infantry in the BG Market Garden weekend.  On the right is an Sdkfz 251/7 Pionierpanzerwagen.  Between the vehicles is an engineer section comprising a 5 man engineering team with additional man pack flamethrower and a 3 man MG34 team. 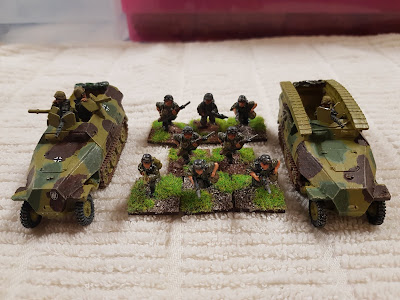 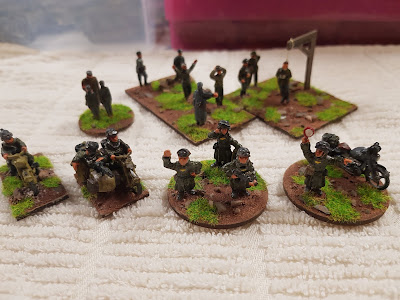 Front left is the "Hitler" vignette, which appears to be based on the last know photograph of him decorating 15 year old boys in uniform, then US prisoners being directed away from the battle area and finally a field execution scene to indicate "Backs to Berlin" or "To the Last Bullet". 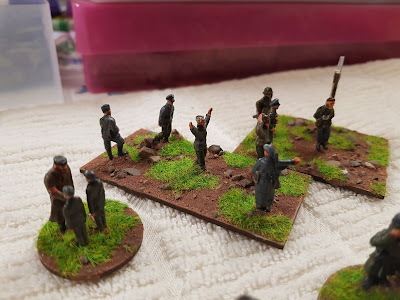 The "Hitler" vignette from Pegasus. 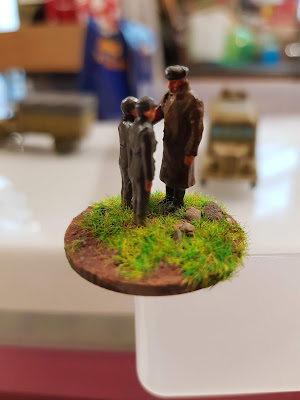 This unit could represent grenadiers of volksgrenadiers, in this case transported by an Opel Blitz bus from Britannia/Grubby.  The figures are mainly plastics from Italeri and Caesar, chiefly the Caesar Panzergrenadiers Ardennes 44 set and German Army with Greatcoats sets. 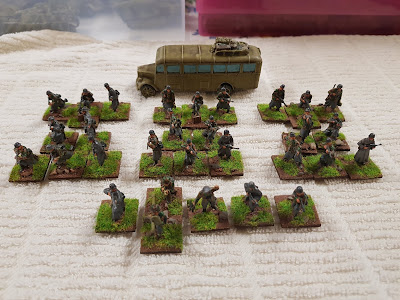 Finally, for now, another grenadier or volksgrenadier platoon, again using Caesar or Italeri figures with a Zvezda command team in greatcoats plus an observer team with scissor scope.  At rear right is a Britannia/Grubby sniper team and on the left an alternative FHQ team.  To their front is a medic figure evacuating a wounded man. 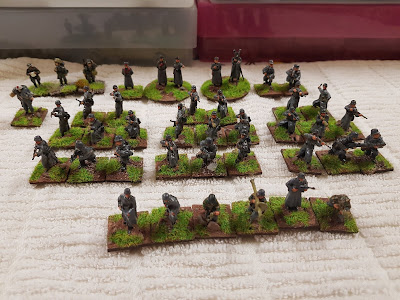 Based on this trawl through my 20mm WW2 German troops, it looks like I'm missing some late war Pz IVs and suitable figures for a Volksturm platoon.  Not shown today are the Kriegsmarine and Gebirgsjager platoons suitable for most of WW2 that I've posted on previously, as well as the early/mid-war Fallschirmjager suitable for the Low Countries/Norway/Crete and DAK suitable for North Africa that I've still to photograph properly.

As ever, thanks for looking and have a very Happy New Year, all the best for 2019.
Posted by Andy Canham at 18:39 No comments:

And now for something completely different …… !  I picked up some assorted 28mm Zulu Wars British infantry at various shows over the last couple of years, scratching an itch to play out Rorkes Drift and Isandlwana, battles which captured my imagination as a boy and, as I found out in later life, also fascinated my father.  Little did I know that one of his treasured tools kept in the shed was a cold chisel that he had made from a piece of an Assegai he had bought as a child in a 1930's junk shop.

The assorted figures I picked up at shows turned out to all be from Black Tree Design and I've supplemented them with a box of Warlord plastics, which match very well.  I've still got 8 figures to assemble and paint, plus a pack of Perry plastics, so enough for 70+ figures.  I'm still experimenting with rules, but I'm currently leaning to sets using 10 figures plus an officer to represent companies. 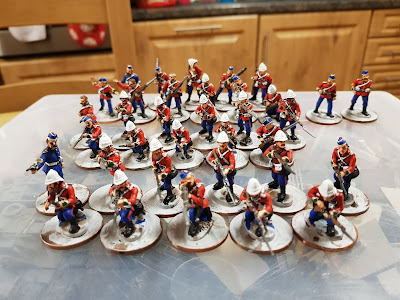 So here are three companies, each 10 infantry and an officer, plus 2 senior officers.  The third company at the back is made up of troops largely in non-combat roles, so this unit will be broken up and allocated out to make up other units in smaller numbers as the plastic figures lend themselves to groups of 8.  I will also add some other officers and characters from the Black Tree Design range and possibly others from Redoubt and Empress. 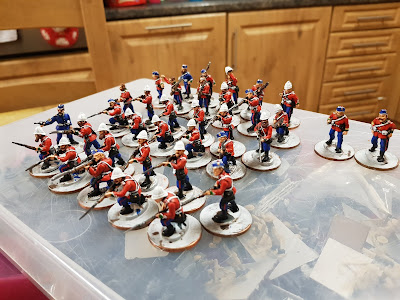 I've painted up a couple of figures in blue uniforms to represent the commissariat, one is clearly an officer using his revolver, the other is handing out what looks like an ammo pouch. 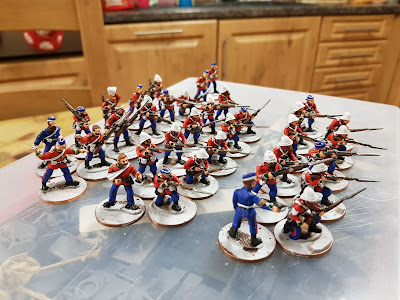 The figures all need gloss and matt varnish and basing/flocking, which I will set about after Christmas. 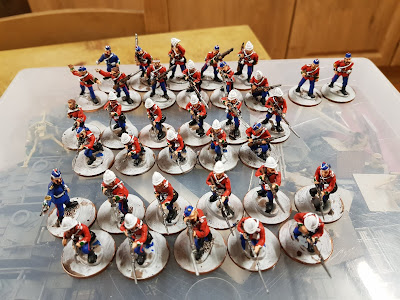 I'm quite pleased with how they have turned out and will be adding more soon, as well as some mounted troops and irregulars.

Thanks for looking and have a great Christmas everyone.
Posted by Andy Canham at 22:17 No comments: