On the workbench - October Derby/Bruntingthorpe Purchases

Spent rather a lot at the Worlds show this year, mainly filling gaps in various collections.  Fortunately, quite a few of them were Bring and Buy or Tabletop Sale bargains.  I've spent most of the spare time this week assembling, cleaning and mounting this little lot. 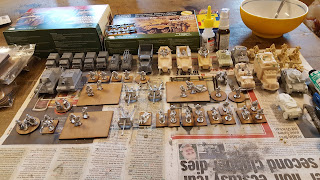 At the back left, some 15mm British truck from Plastic Soldier, picked up on a table top sale for a fiver.  Next to them a couple of 15mm Sdkfz 231s for the DAK and a 20mm Opel Maultier to tow a 50mm or 75mm PAK AT gun for my late war recce platoon.  In front of the British trucks are a Zvezda Jagdtiger and a Sturmtiger - sometimes the Allies need a good scare.  Beside them are some Britannia German engineers with NCO.  In front are a Britannia SS MG42 on tripod, Panzershreck team and spotter team, plus two PAK 40s and a PAK 38, with a prone sniper. 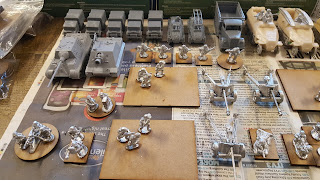 At the back, next to the Maultier are a Britannia Sdkfz 251/16, a 251/7 and a 250/8, the last two destined to provide support to my late war German recce platoon.  Next to them is a Command Panzer I and Panzerjaeger 1, both from Early War Miniatures, and then some Italeri motorcycles, all for my 20mm DAK force.  In front of them on the right is an Italian tank from the miscast box at Early War Miniatures (the Humber scout car in front is also from them).  Next to the Italian tank is a Britannia Opel Blitz radio truck and command Horch staff car and a Feldpolitz motorcycle combination, all from Britannia.  In front of them, an officer and NCO plus 4 teams of 4 based around an MG42 gunner; these will be forming the core of the recce platoon, along with some Sdkfz 251/1s that I have yet to assemble. 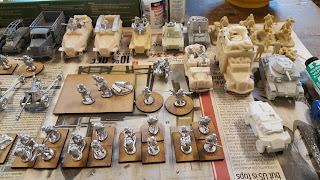 These should keep me out of mischief for a few weeks.