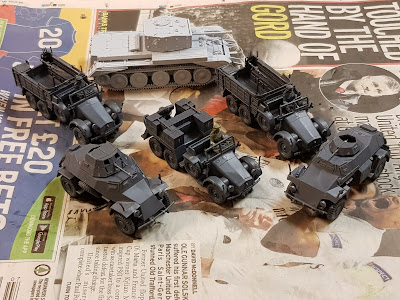 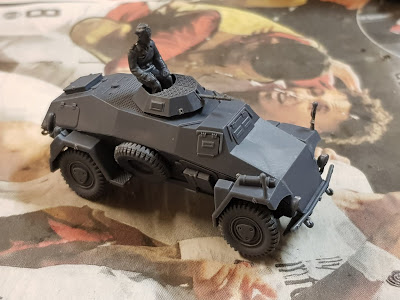 Another First2fight kit, an Sdkfz 222. 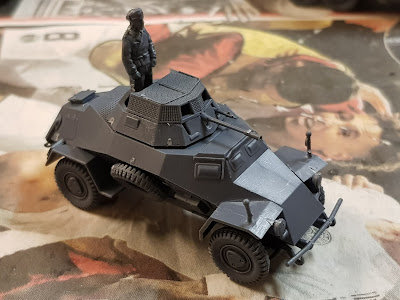 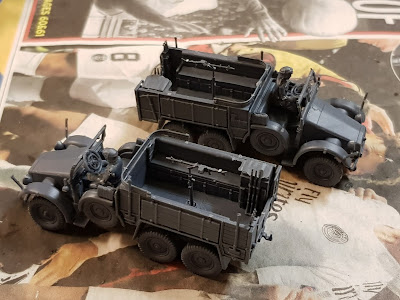 A First2fight Kruppe Protze 69 artillery tow, with a Zvezda PAK 36. 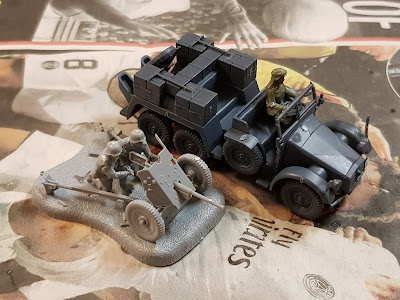 A buttoned up Airfix Cromwell. 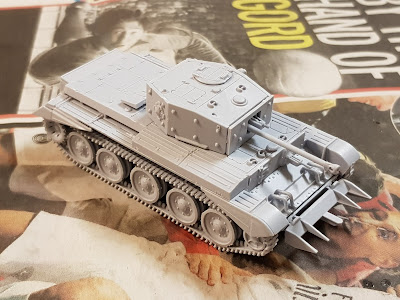 Finally for now, a set of Italeri DAK motorcycles. 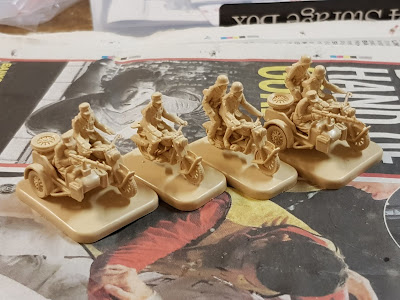 Soon be time to reclaim my corner of the kitchen table, so I can resume painting.

Happy New Year!  So, with the Civil Powers taking control of the kitchen table (AKA my workbench), painting ground to a halt over Christmas and into the New Year.  So, with little to entertain on tv these days and lots of long dark days and nights, what better than to assemble some of the kits that reside in the stash, some of them for several years, others more recent.

First up, a real quick build from First2Fight, a PzIIC - very much like assembling one of the smaller Zvezda 15mm kits, but this one in 20mm.  Needs a bit of jazzing up with some stowage. 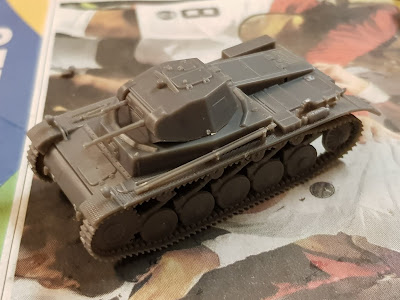 Then an Italeri Wirbelwind.  Not a bad model to assemble and nicely detailed, but the need to plastic weld some of the gun assembly was fiddly, but not significantly so.  However, the tracks were a bit of a sod as individual track links needed to be glued around the stong curvatures of the sprocket wheels and as connectors between straight sections.  What a palaver, especially as they don't attach to each other in any way other than glue.  Still, quite a nice model once it went together. 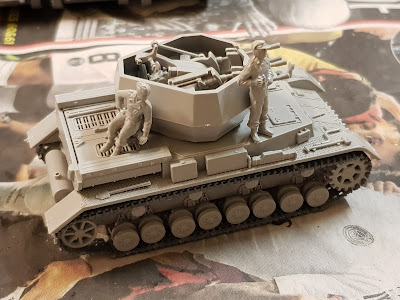 Another First2fight, this time an Sdkfz 247 recce/command car.  Axles a little spindly, but builds into a nice sturdy little kit.  Think it will need basing to minimise damage to those thin axles though. 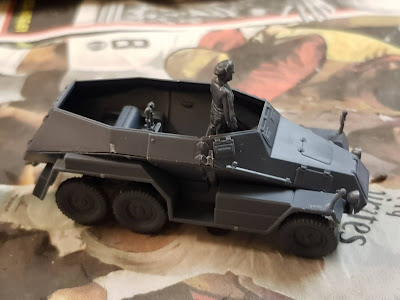 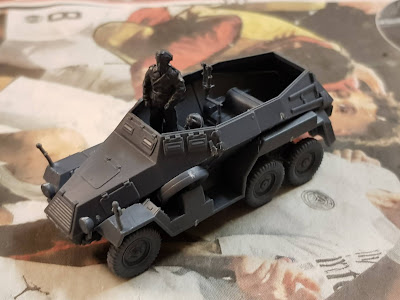 Interesting assembly challenge posed by this Fujimi Ferdinand.  The big issue was making the tracks link up as they are old style rubbery plastic needing to be hot welded, but one track was a good centimeter short, while the other was more like an inch short.  Even draping over a radiator to warm up and then stretching didn't significantly close the gap.  In the end, I used bits of the sprue the tracks came on to melt and add length on the underside of the tracks - as I'm going to base them,  it shouldn't be too visible. 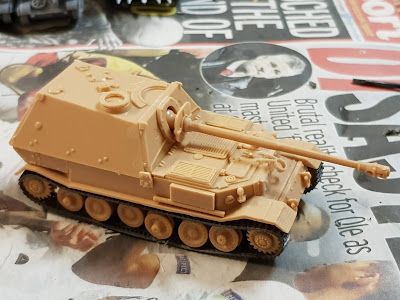 Compared to Fujimi, this Airfix Cromwell was a delight to assemble and the tracks were so straightforward it was untrue.  Any model manufacturers would do well to try and emulate this technique for track assembly.  I need to dig through my spare tank commanders to pop a figure in the hatch. 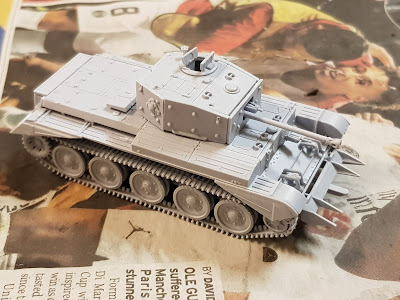 A universal carrier section from Plastic Soldier Company.  These were from the standard set, with the addition of 2" mortar crewmen from the carrier variants set.  This is where, again, I have been somewhat disappointed by PSC, as they appear to have used a slightly different scaling for the variants box compared to the basic carrier sprue.  This makes crew figures from the variants box appear to be giants, compared with the basic crew (I estimate more like 23 or 24mm high, rather than 20mm), which is really noticeable when comparing the driver and gunner figures with variant crew figures.  Natural variation in height might explain this, but for the fact that the helmets of the variant crews look gigantic compared with the basic vehicle crews.  Unfortunately, the scaling difference also means that parts such as the armoured front of the artillery observation carrier are slightly too large to fit the rest of the standard model and need cutting back to fit. 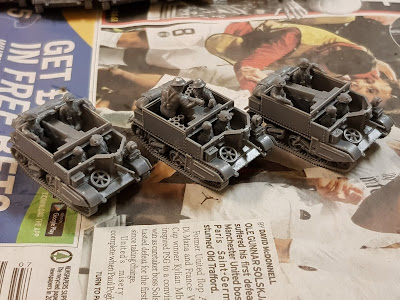 A second carrier section, one to carry a bren team, the middle a 2" mortar from the variant kit, but with standard kit crew, and the third to carry a PIAT team. 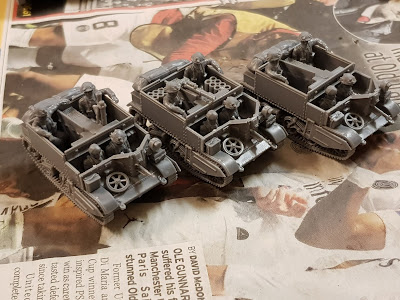 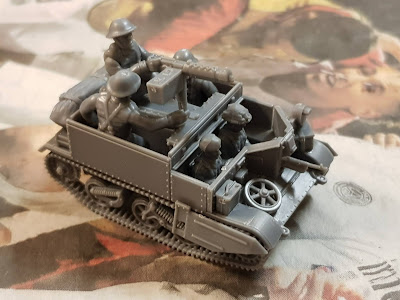 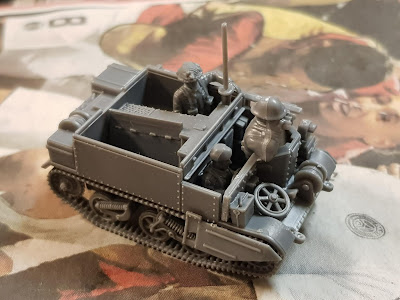 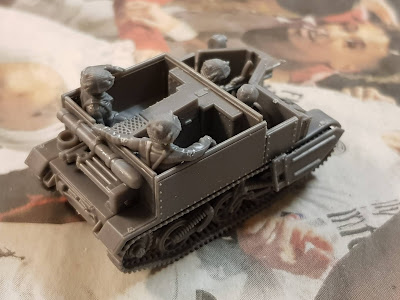 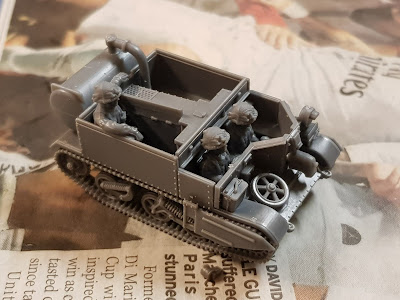 So, not a bad group of vehicles assembled over the holidays, I'm quite pleased with that little lot.  Should keep me out of trouble for a few weeks.