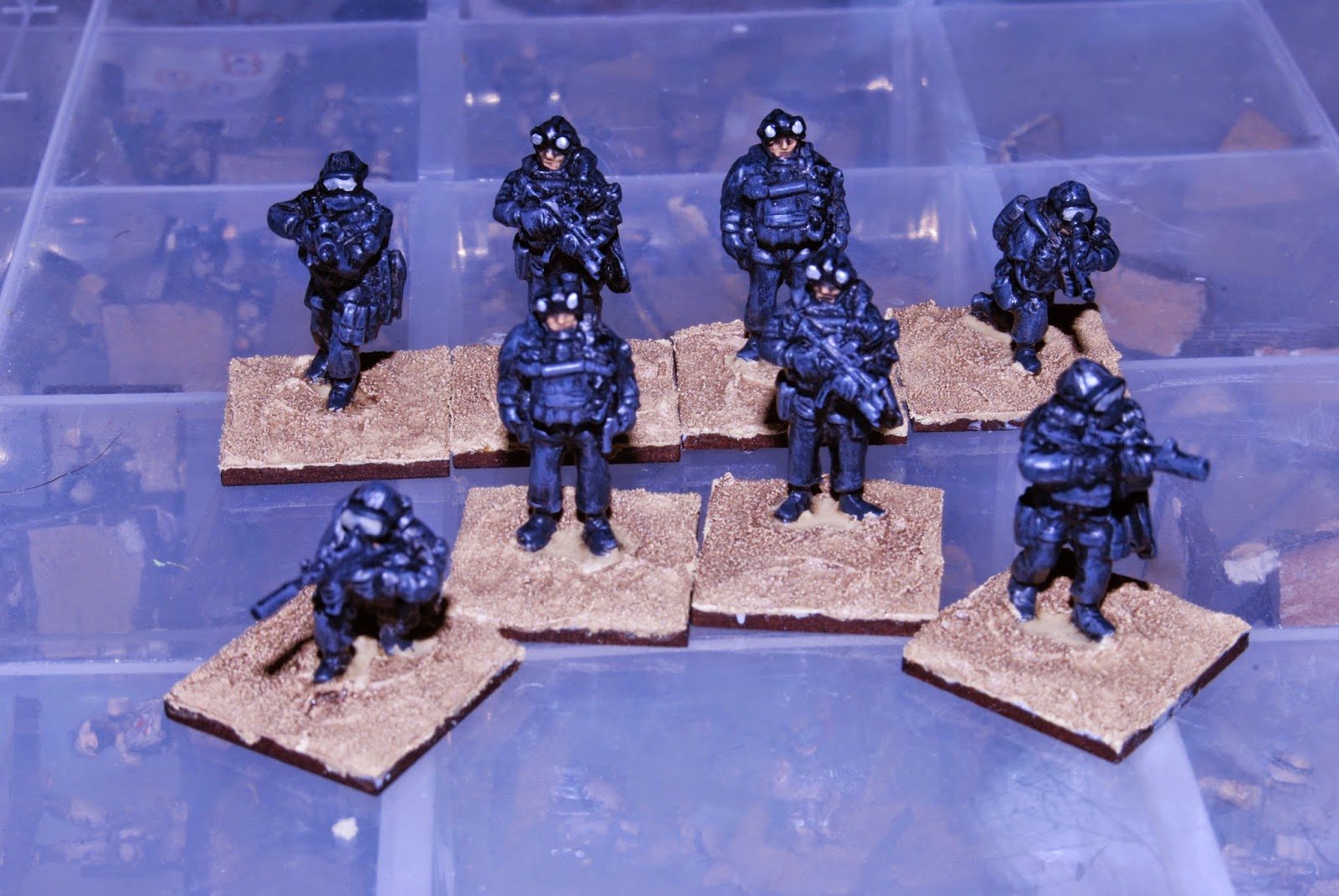 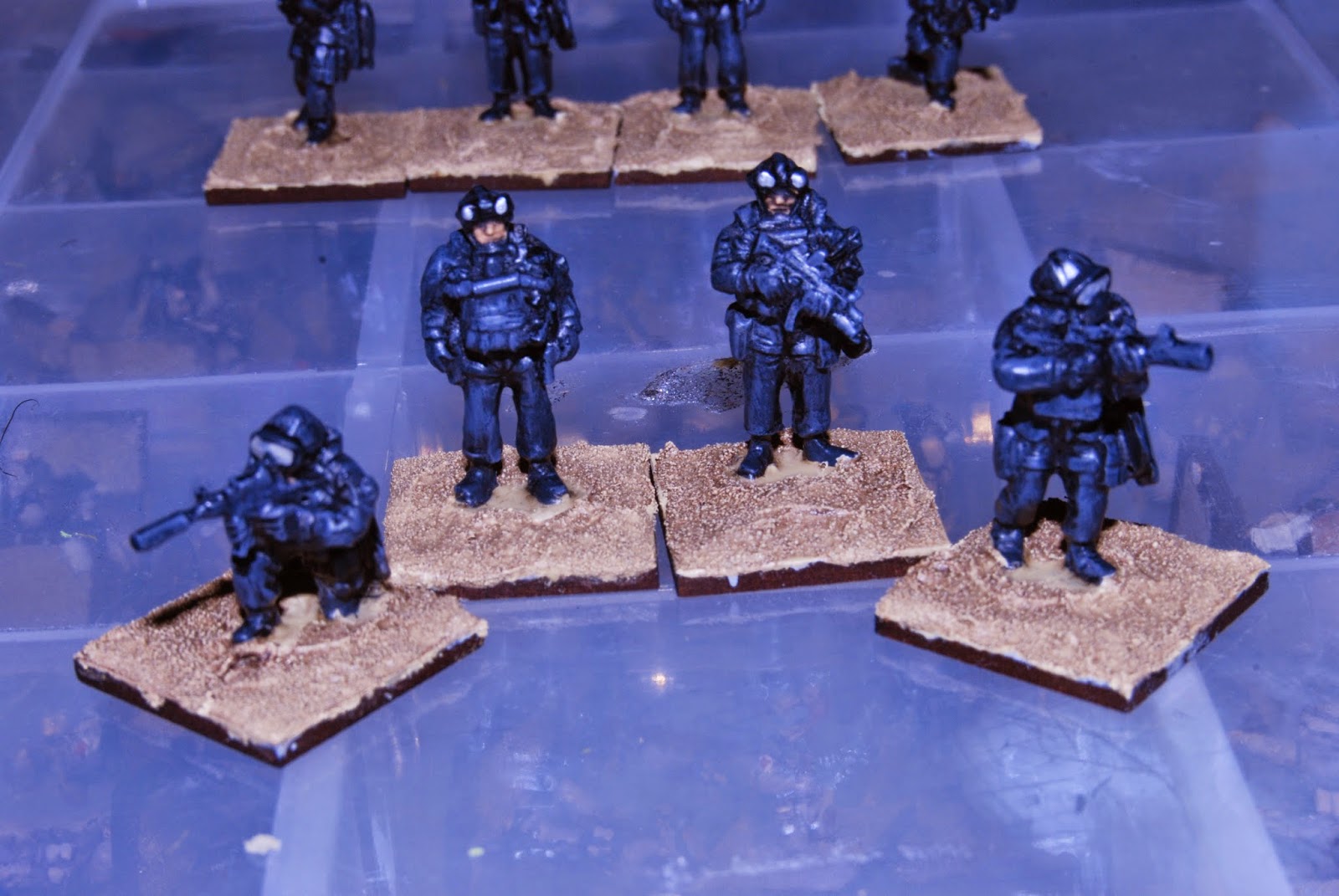 These will do service as various special forces frogmen - US Navy SEALs, Marine Force Recon, Special Boat Service and others.  A nice little addition to my Special Forces collection.

What's on the workbench?  Well, a BAOR infantry section in NBC gear and some assorted 1980's British police.  I've also painted up a couple of distressed (rusty and dusty) Datsun pick ups - now doing the two Dushkas and crew to add a couple more technicals to my irregular forces.  After that, I'm not sure - I'll have to see what the painting muse fancies and whether I have enough dosh to get the infantry to finish off the 15mm Soviet MR Company that I posted on earlier this month.

Thanks for my Christmas present Lynda and thanks to you for looking.
Posted by Andy Canham at 11:09 5 comments:

First out of my Christmas present bag of Enduring Freedom US Marines from Elheim were 2 packs of MCA01 USMC Squad Leaders carrying M4 carbines.  I've painted these in desert MARPAT, using a method heavily influenced by that in the FonF Enduring Freedom book, but tweaked to incorporate some ideas from the internet and some of my own.

The figures were base coated light grey, then washed with US tan earth.  The uniform was lightly, then heavily dry brushed Iraqi sand and finally lightly dry brushed deck tan.  The body armour and webbing was washed English uniform and dry brushed khaki.  Then the whole lot was washed in strong tone ink diluted 2:1 with flow improver.  Weapons and helmet bracket were painted NATO black, faces in skintone.  Weapons were dry brushed basalt grey and faces dabbed sparingly with strong tone ink undiluted.  Goggles were painted English uniform or Iraqi sand and sun glasses were painted NATO black with aluminium for the lenses of the goggles and sun glasses.  Sealed with two layers of matt varnish.

Here are the two sets alongside a die cast AAVP7 that I picked up off Ebay. 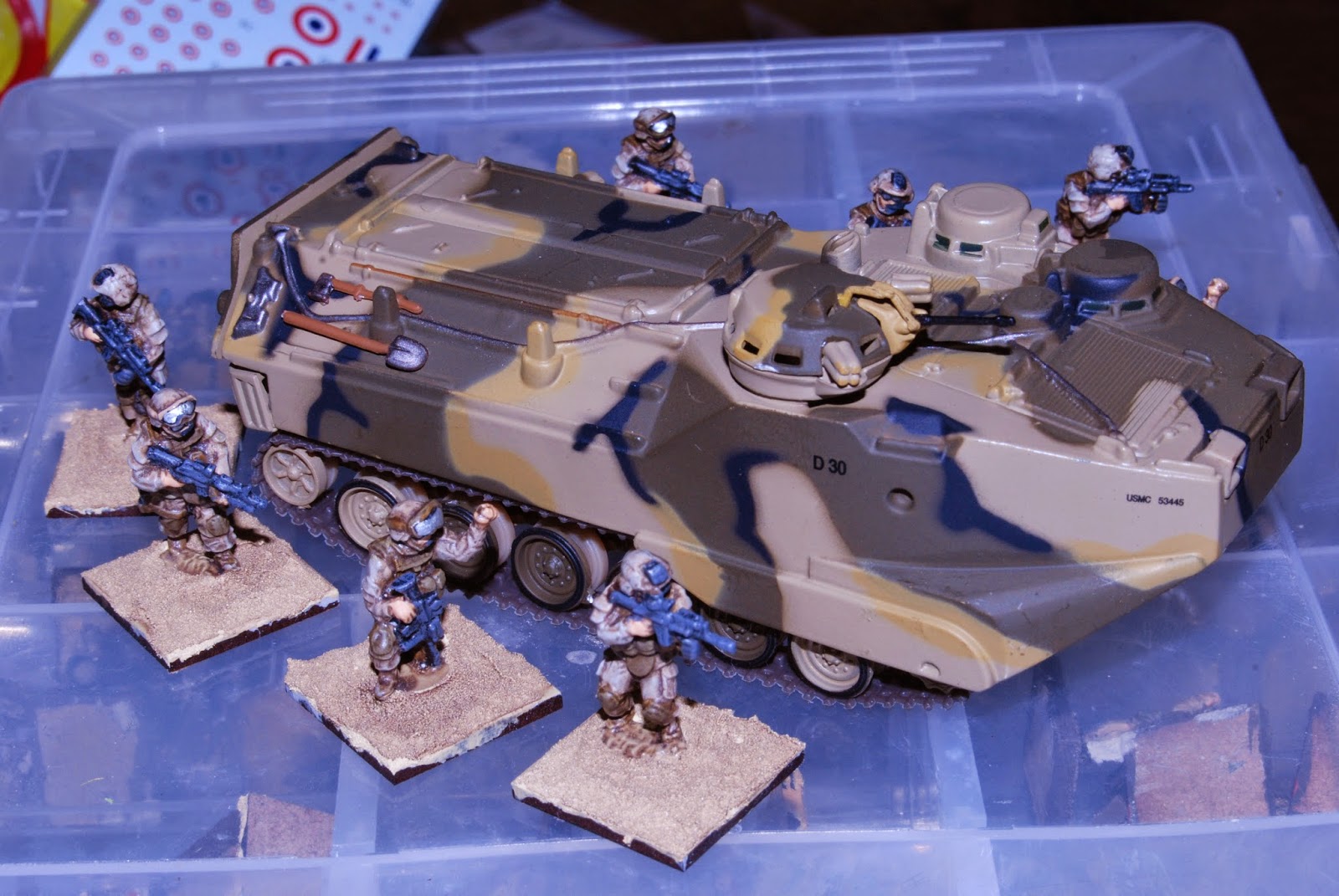 One of the squad leader packs - I like the way these look. 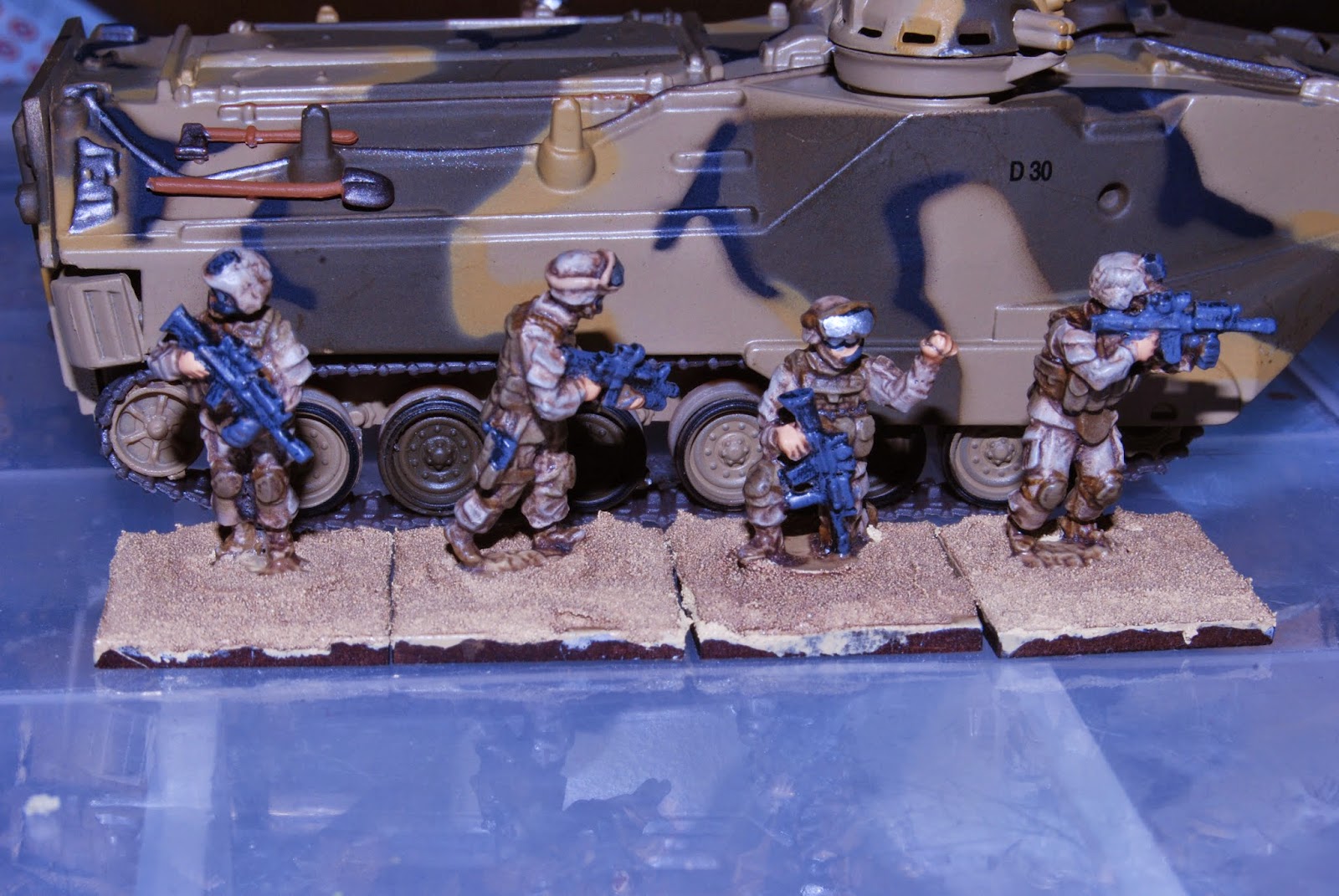 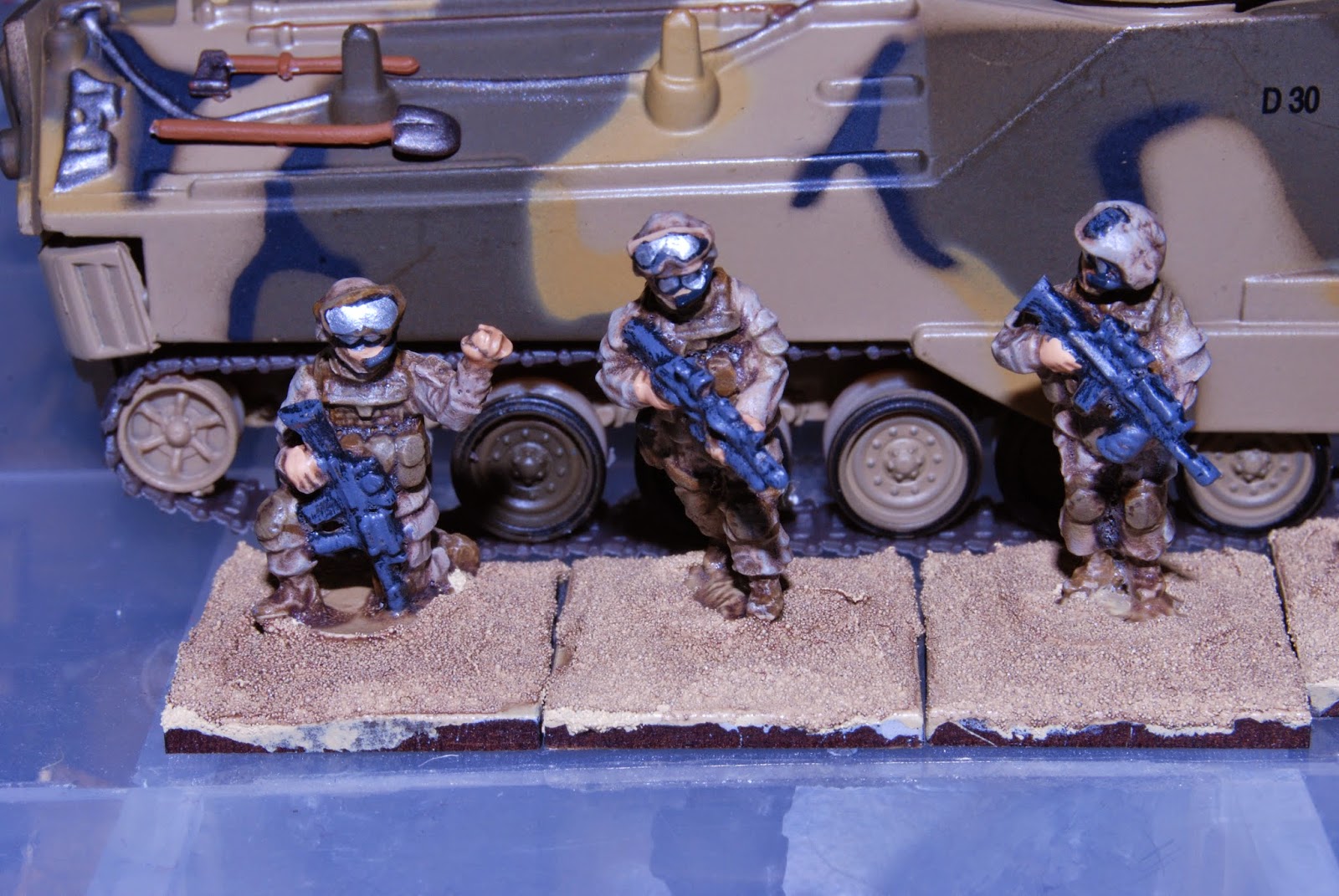 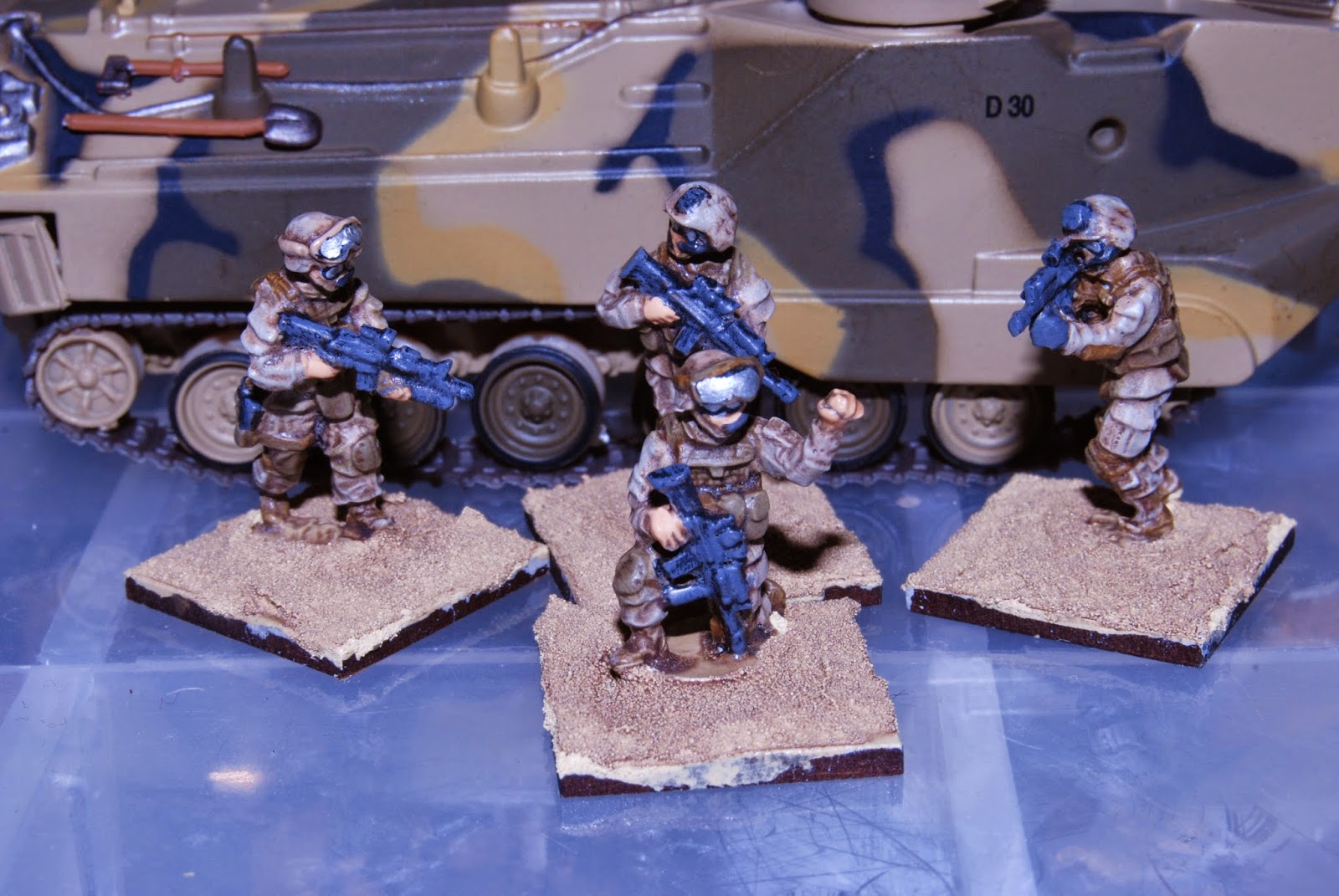 As ever, thanks for looking.
Posted by Andy Canham at 22:18 2 comments:

I've started work on a 15mm Soviet Motor Rifle Company.  The infantry are from Peterpig's AK-47 range and are regulars in Russian style helmets.  The photos show a dismounted platoon of three sections, each comprising a section assistant leader, RPG/AK-74, PK LMG and 3 AK-74 troopers.  There's also a 2 man command section.  These would be mounted in BMPs or BTRs, which would carry the section leader, driver and gunner, so I've ordered some BMP-2s from the QRF sale, which is on until the 2nd Feb.  I've got to get a couple more bags of figures from Peterpig to finish off the other two platoons and that should give me a motorised company. I'll post an update when the infantry and vehicles are ready. 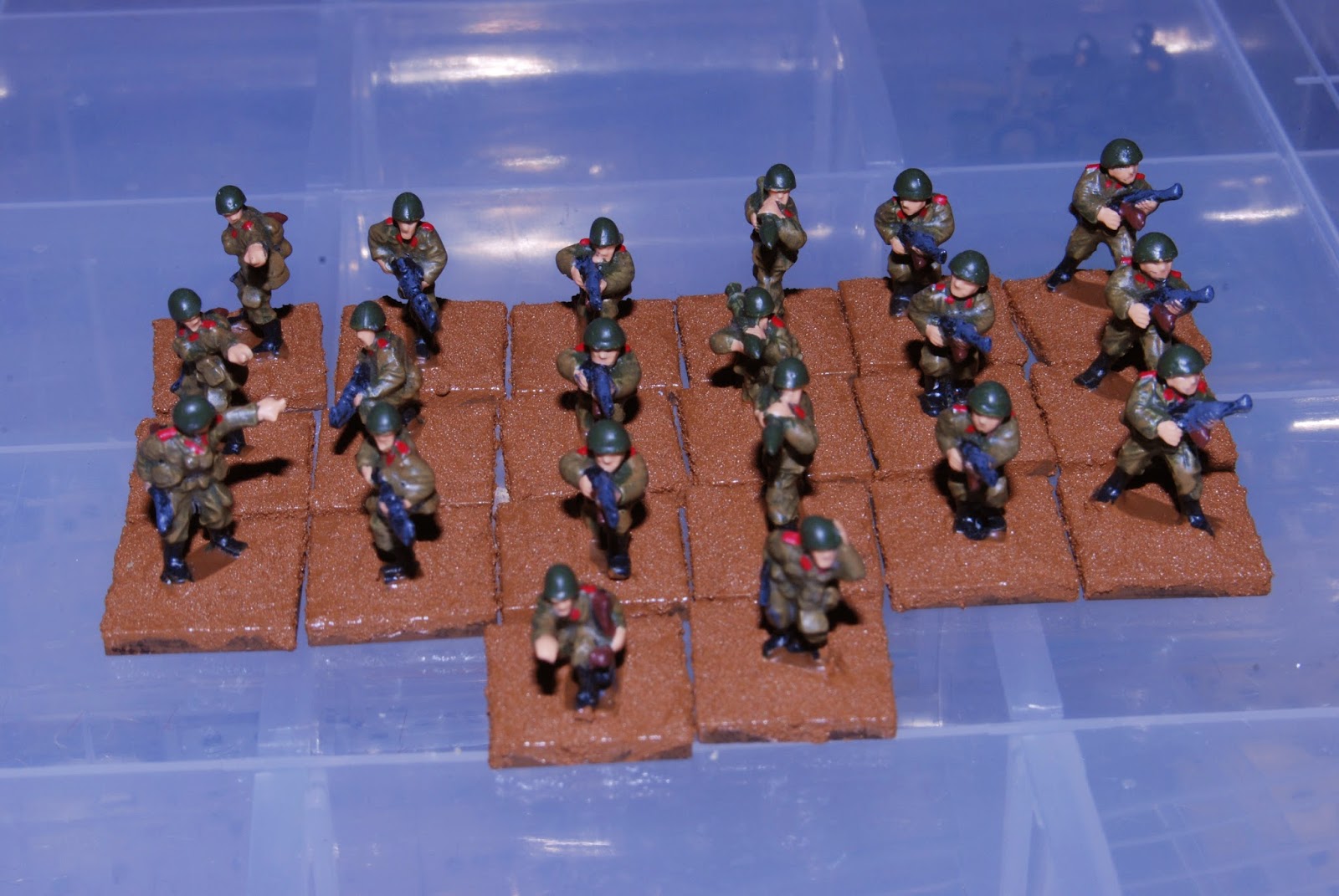 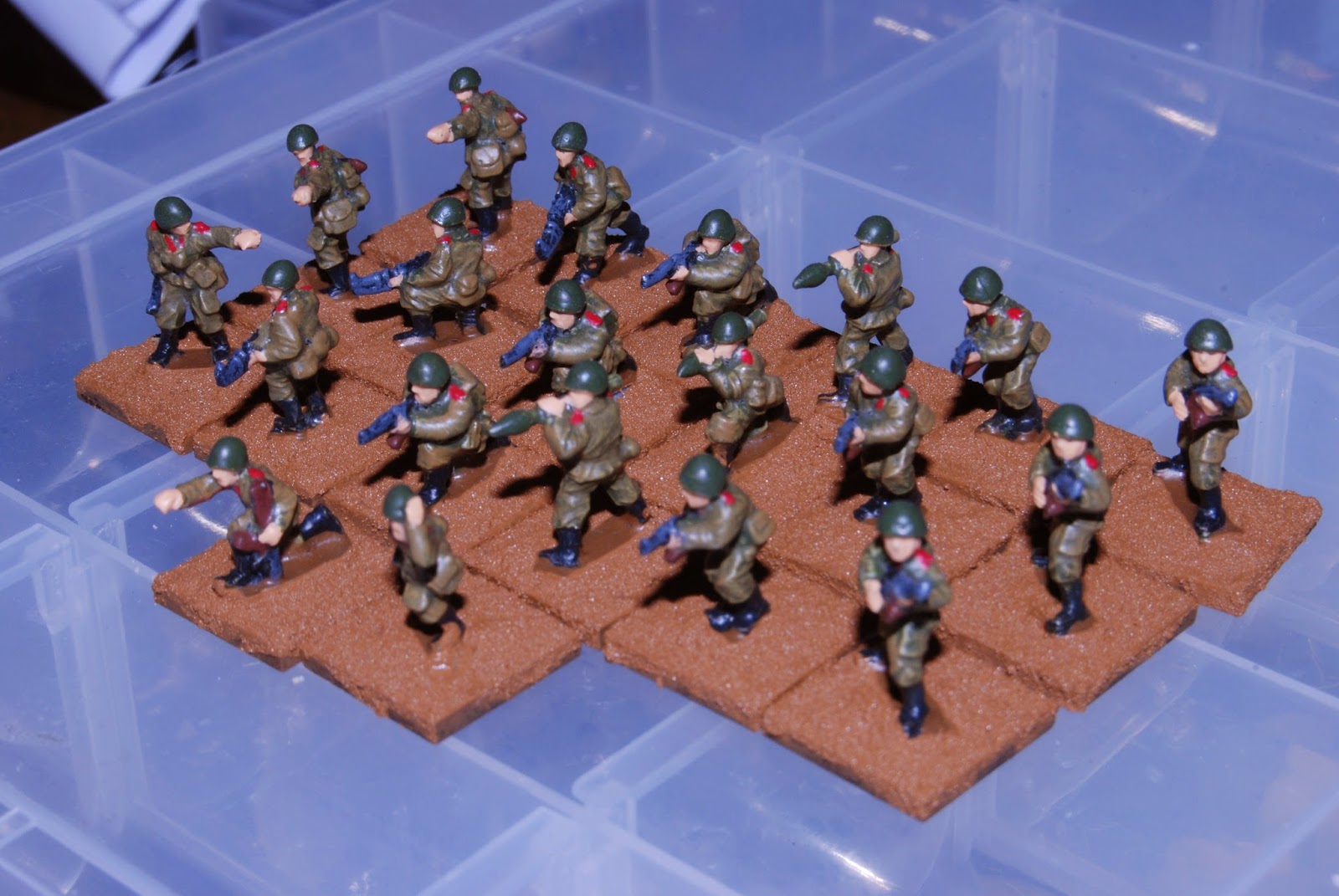 Thanks for looking.
Posted by Andy Canham at 09:58 3 comments:

At the end of November, Will kindly picked up a small order from Britannia for me at the Leeds show.  The order comprised an additional Viking apc to give me enough to mobilise a platoon, another SAS fireteam, some assorted Taliban HMGs to mount on technicals, and a Mastiff vehicle plus crew.  I intend to use the Mastiff as a bomb disposal vehicle, similar to the one used in Bluestone 42 (link http://en.wikipedia.org/wiki/Bluestone_42 ). 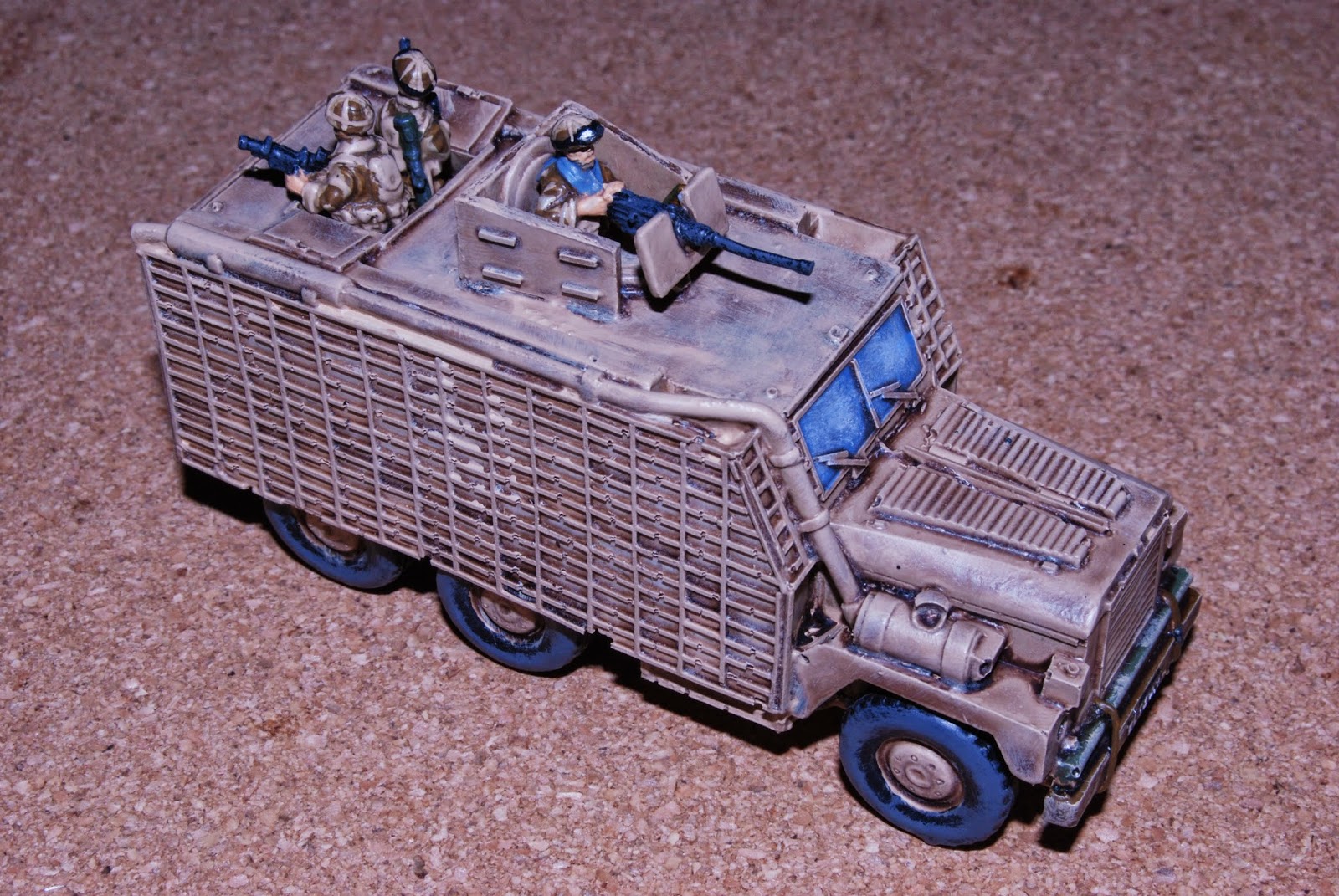 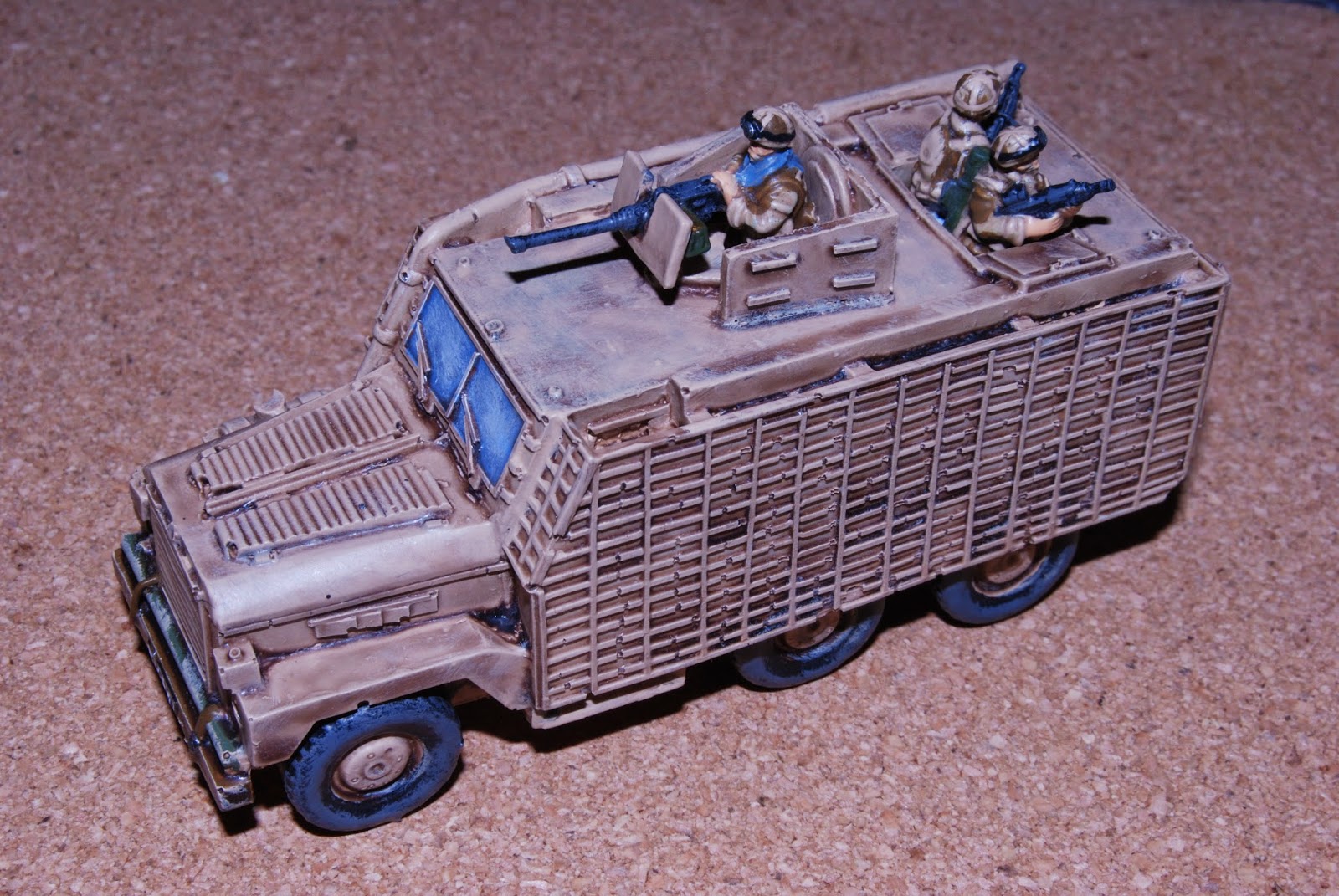 Detail of the crew. 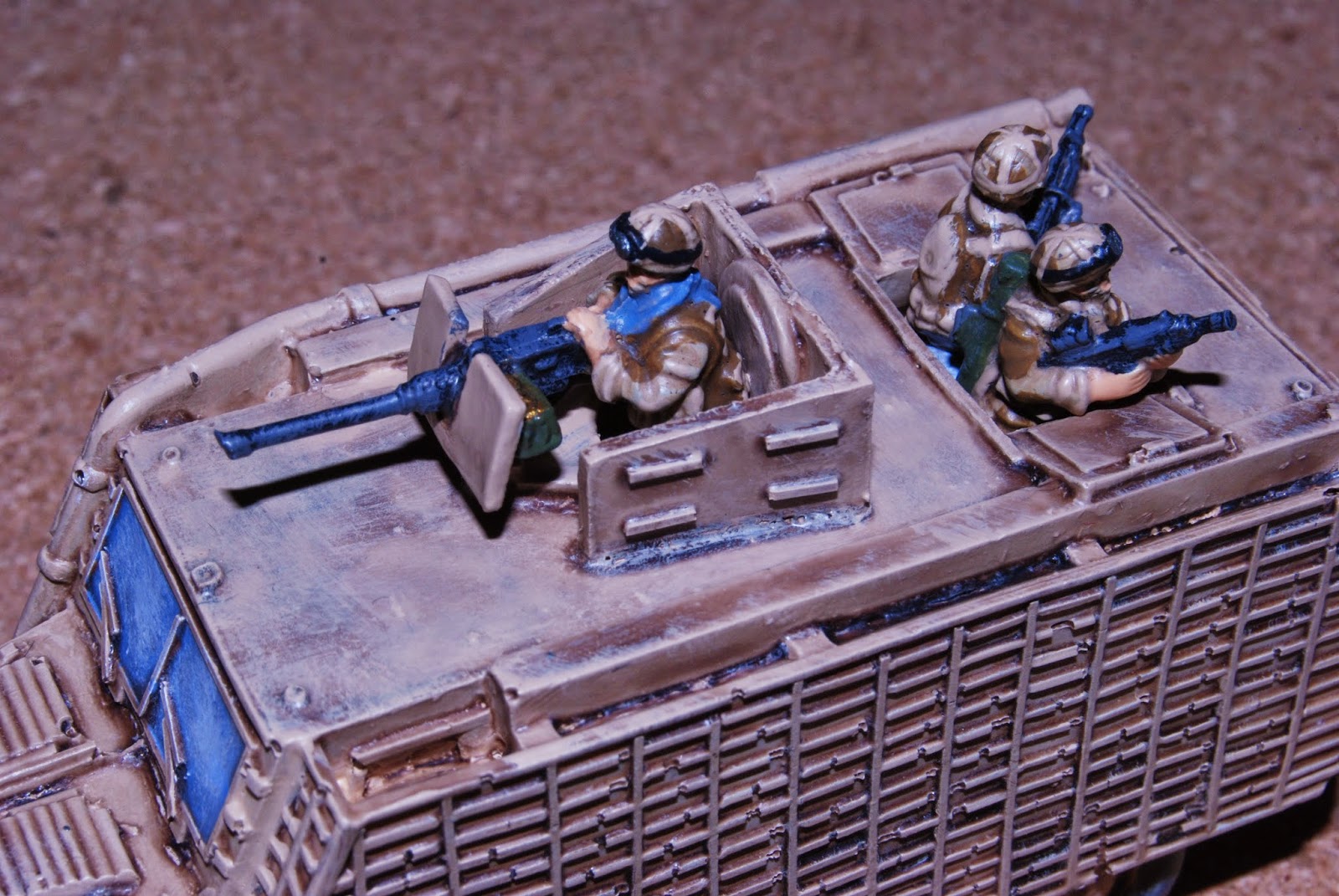 The front of the vehicle with un-bogging bars. 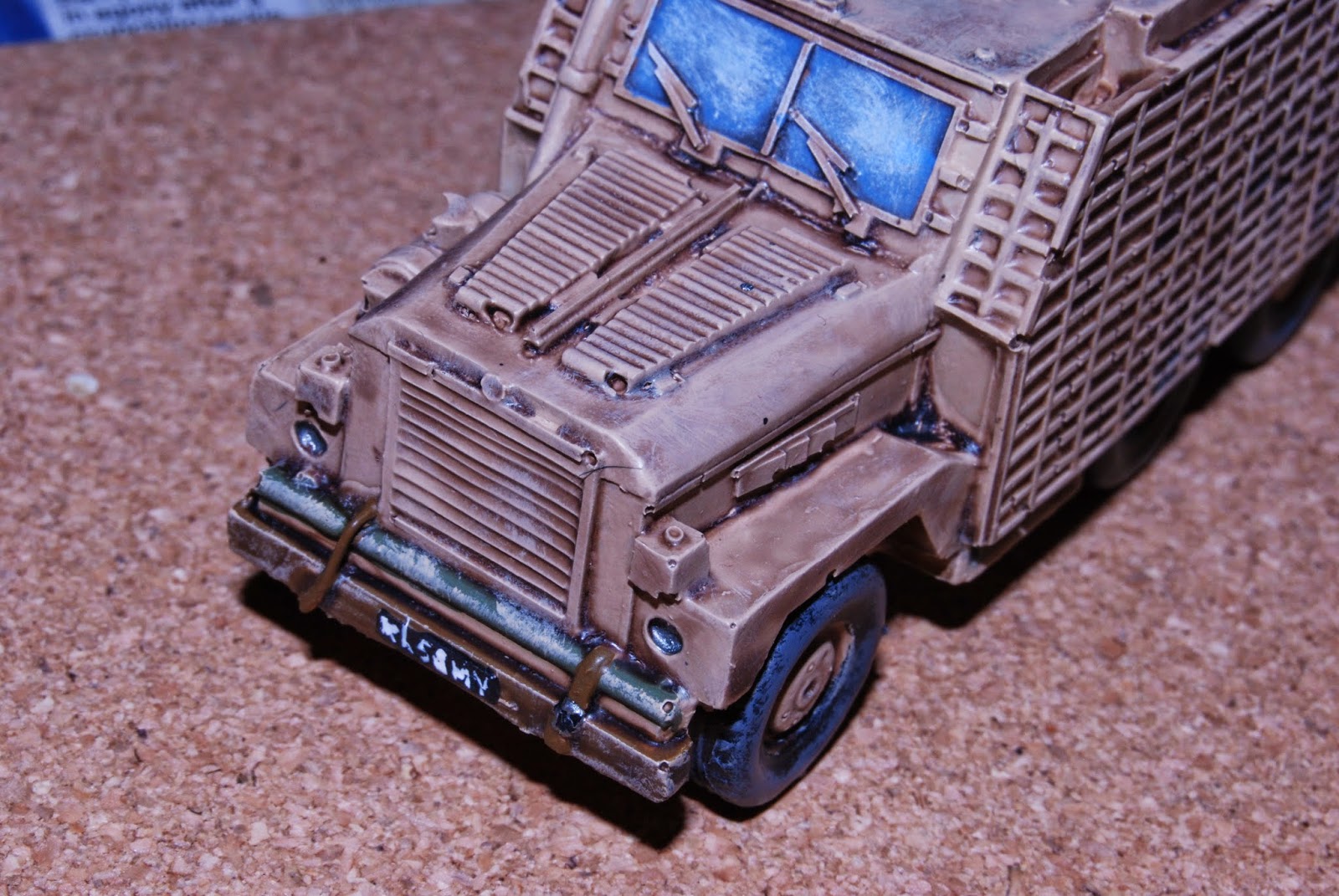 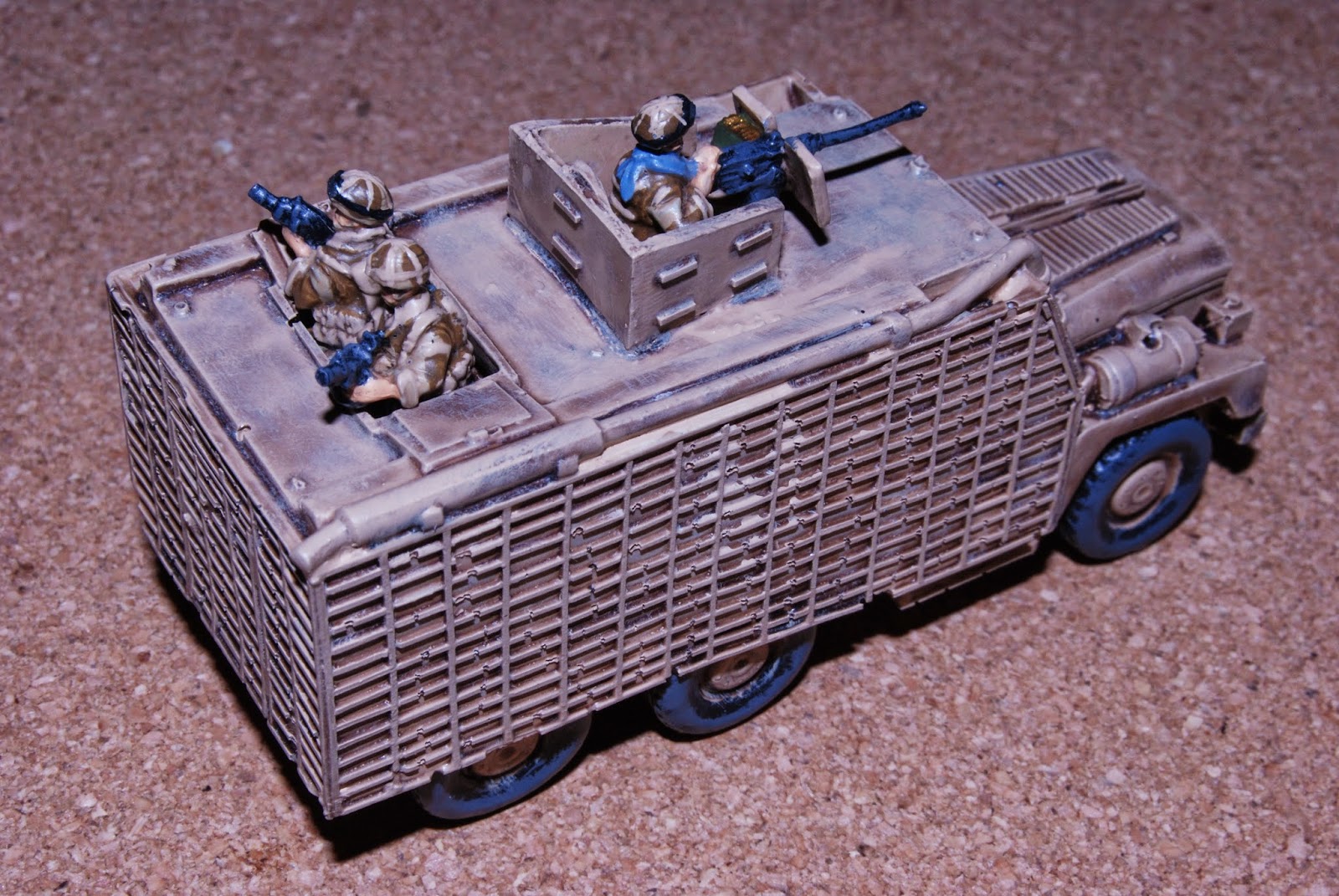 Still a few air bubbles require attention, but now I have some Milliput they will be dealt with.

As ever, thanks for looking
Posted by Andy Canham at 08:34 7 comments:

Over the holidays I also worked on my mercenary force for modern African skirmish games ("Wild Geese").  All the figures are from Peter Pig in 15mm.  Most are from the AK-47 regulars in berets range, supplemented by some professional AT-4/LAW armed figures in bush hats.  There are also a handful of Vietnam range US special forces troops with LMGs and grenade launchers, plus an Australian radio operator in beret.  From the back there are 5 10-man units, each with an officer in red beret plus 2 LMGs and an AT-4 with 6 men armed with FN/SLRs.  These would comprise the core force for the "Wild Geese" units originally envisaged in the book by Daniel Carney, although this would drop to 4 units according to the film version.  At the front is an HQ unit of 8 men, including a figure carrying a belt-fed HMG (which appear in both the "Wild Geese" book and film) plus a hand held SAM, radio operator and figures in red berets for Janders and Faulkner.  Behind are two 5-man scouting sections.

They are painted NATO green with flat earth, Iraqi sand and German cammo light green patches, green ochre berets except the officers with flat red, NATO black weapons dry brushed basalt grey, khaki grey pouches, packs and webbing.  They need some static grass adding to the bases and they are done.  For transport, in the film they used a pair of open topped Land Rovers plus three Bedford lorries, so I'll have to start searching for suitable vehicles for these. 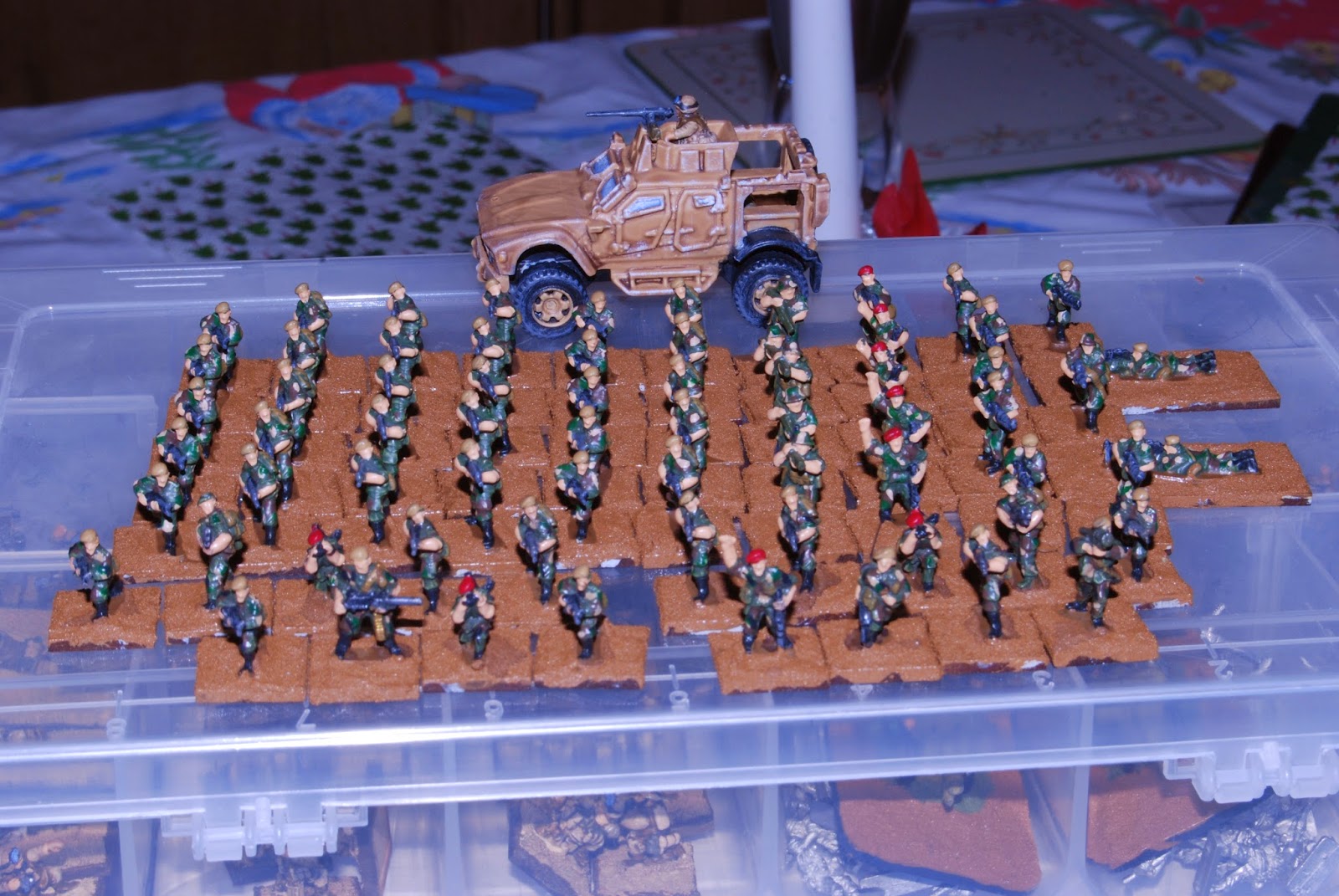 The troops in more detail including the kneeling Janders and the menacing figure wielding the HMG. 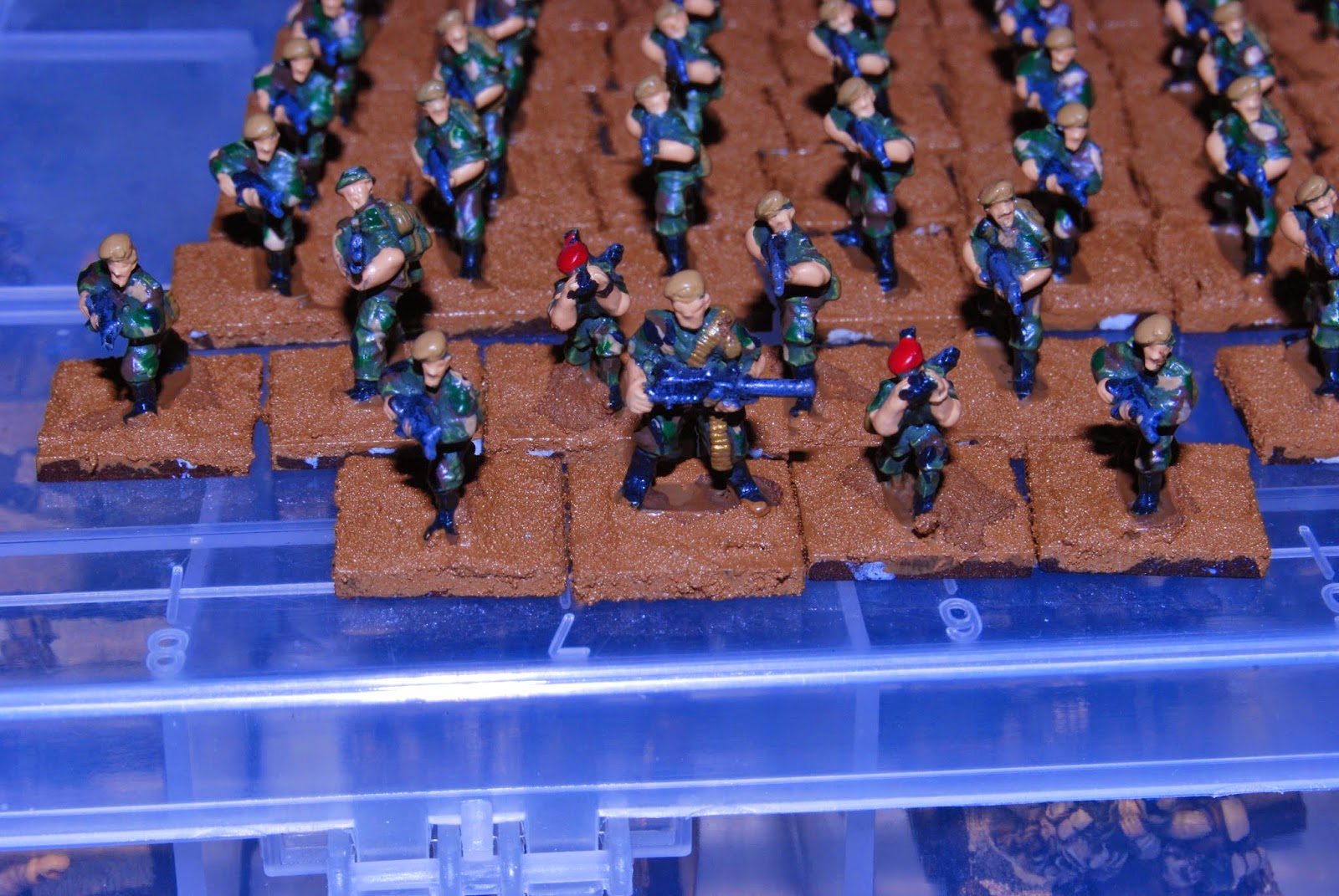 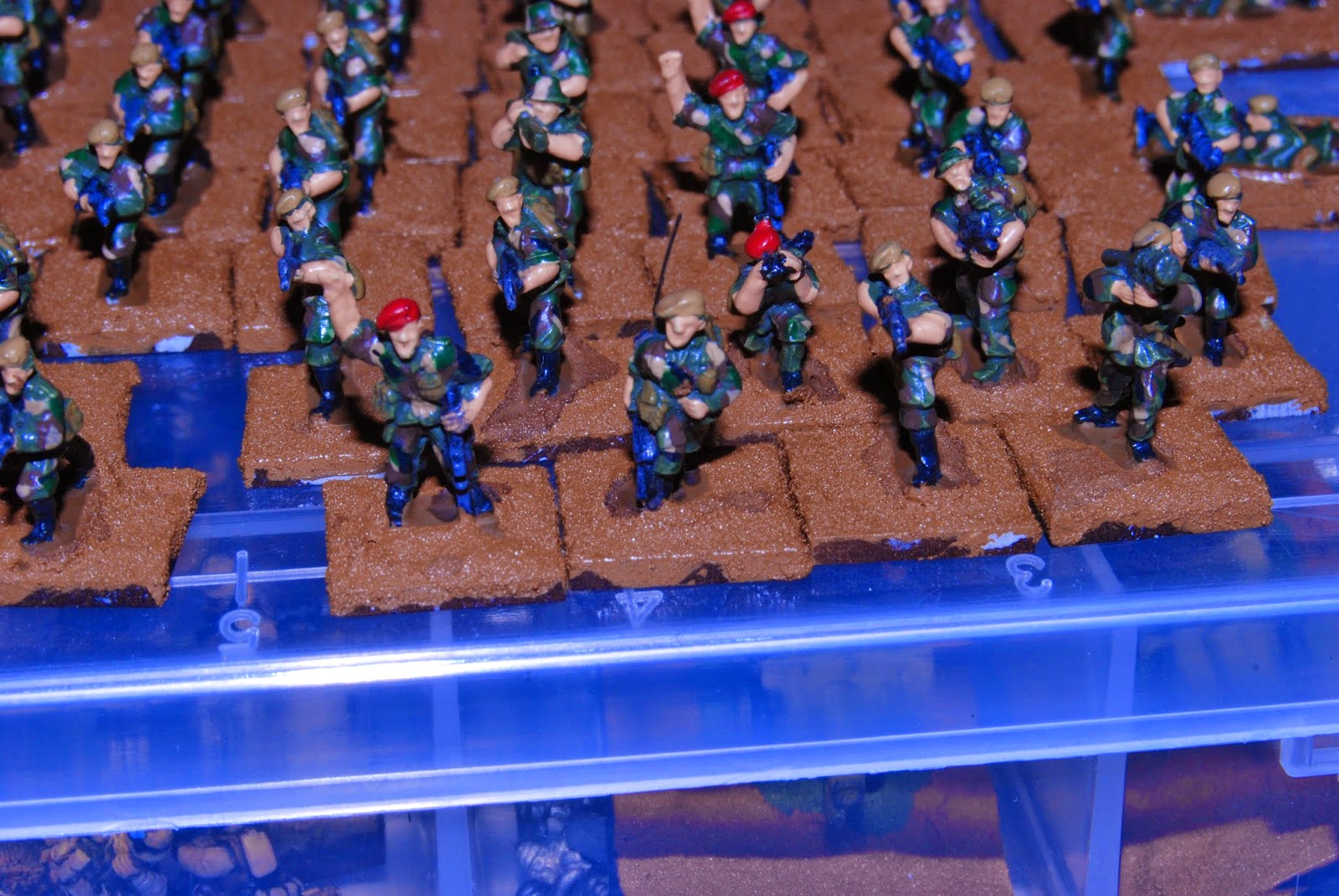 The regular troops armed with FN/SLRs. 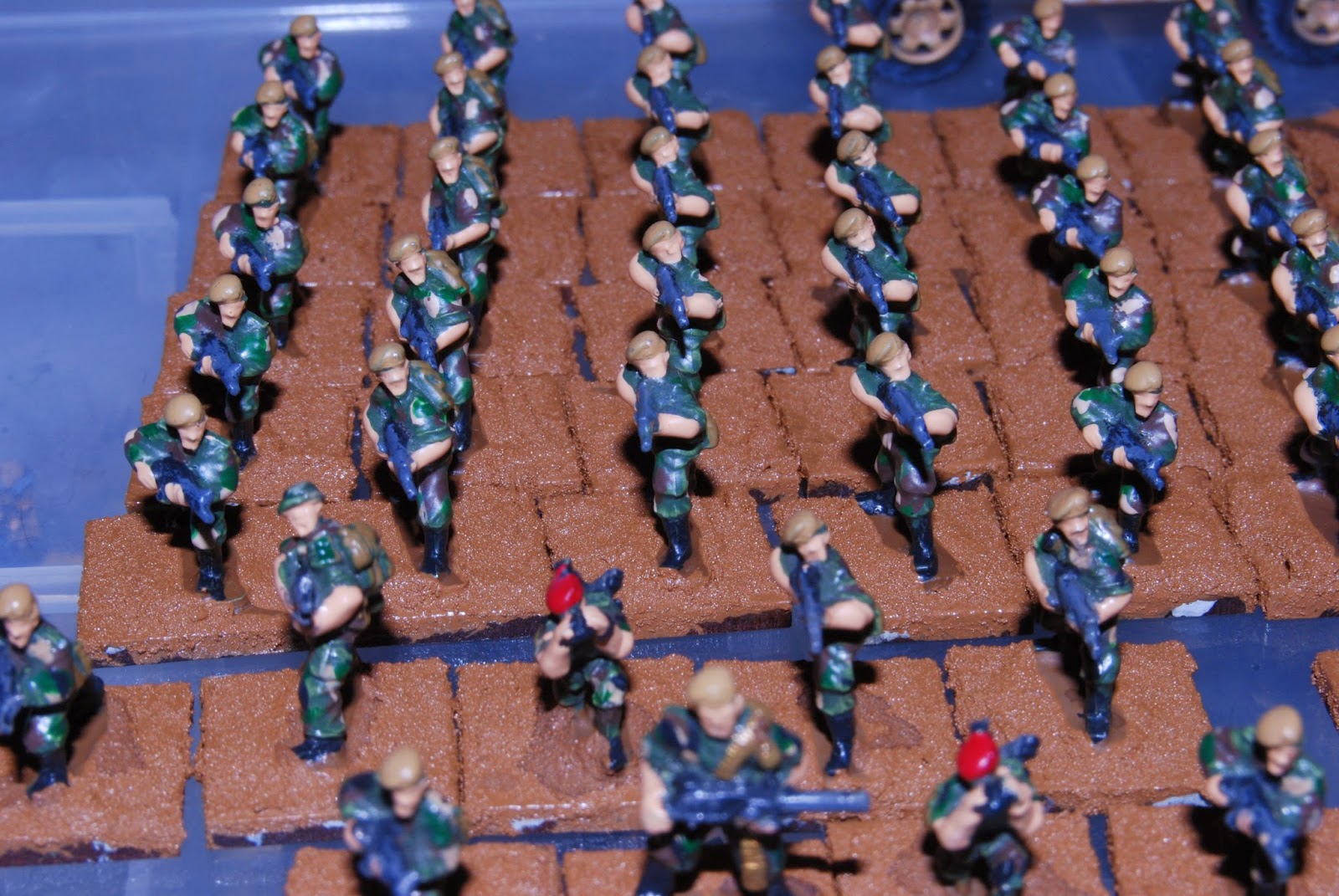 Commanders, AT-4 figures and LMGs. 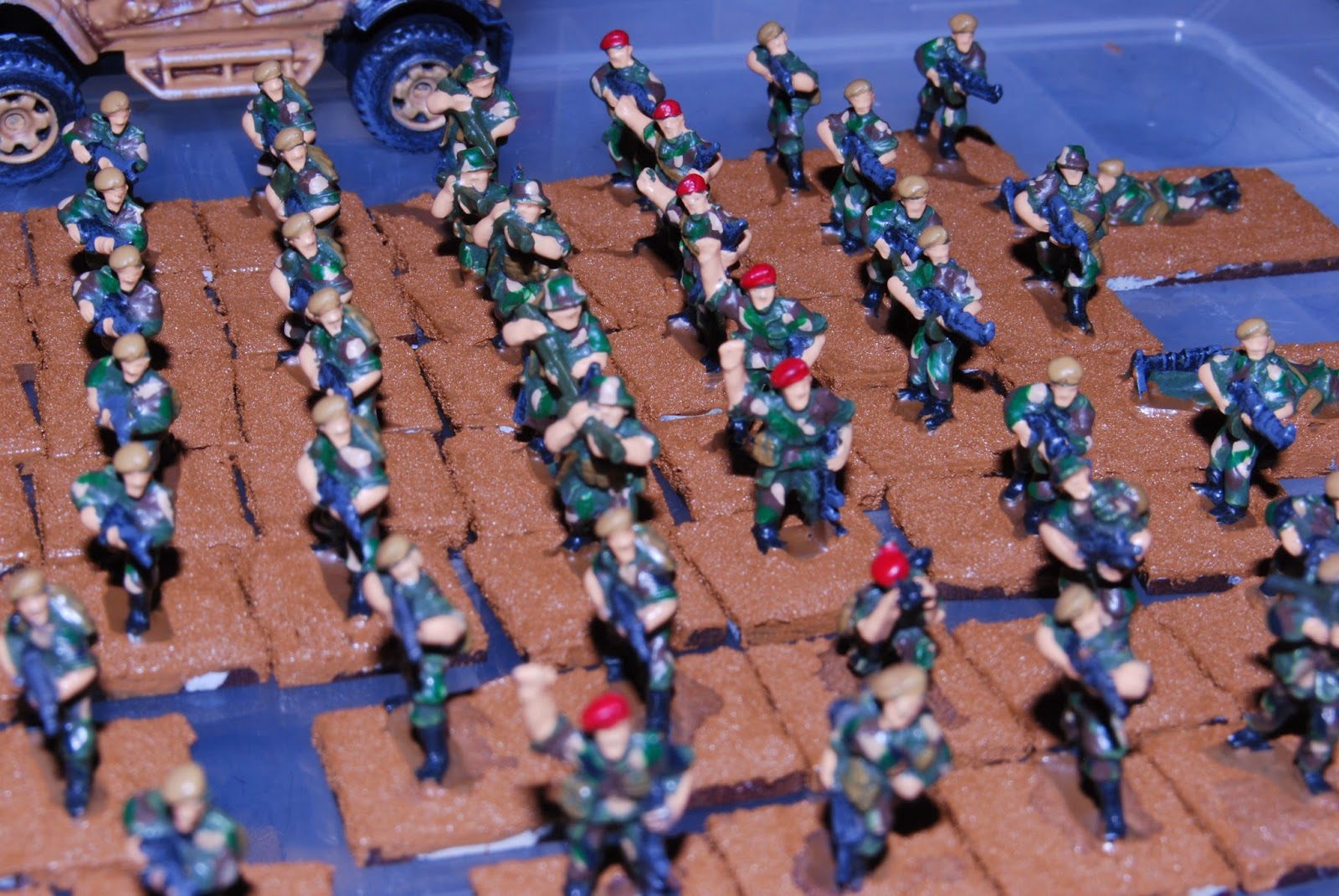 I'm going to put together a campaign based around this force using scenes from the "Wild Geese" book and film and the original book and film "The Dark of the Sun" by Wilbur Smith (film starring Rod Taylor link http://en.wikipedia.org/wiki/Dark_of_the_Sun ).  For the latter, I'll need a train in 15mm.  For the "Wild Geese" scenarios I'll need a Douglas DC-3 Dakota in 15mm (maybe Zvezda).

Over Christmas, I was working up these four Matchbox Oshkosh MRAPs.  The vehicles are just repainted, some were originally orange and some sand-coloured.  They are painted tan yellow and NATO black, washed with matt varnish and army painter strong tone ink.  Windows are azure, dry brushed white and the vehicles are dry brushed white with black dry brushed basalt grey.  HMGs are spares from the Plastic Soldier British M3 halftrack set and the USMC crew figures are Peter Pig medics cut in half and glued in.  These are going to find a place on the table for 15mm games of Force on Force, Tomorrows War and AK-47.  Purchase price £1.30 per vehicle, well worth getting on my knees and rummaging through the big boxes of toy cars on the bottom shelf of the toy counters in supermarkets - thanks Tesco's and Morrison's. 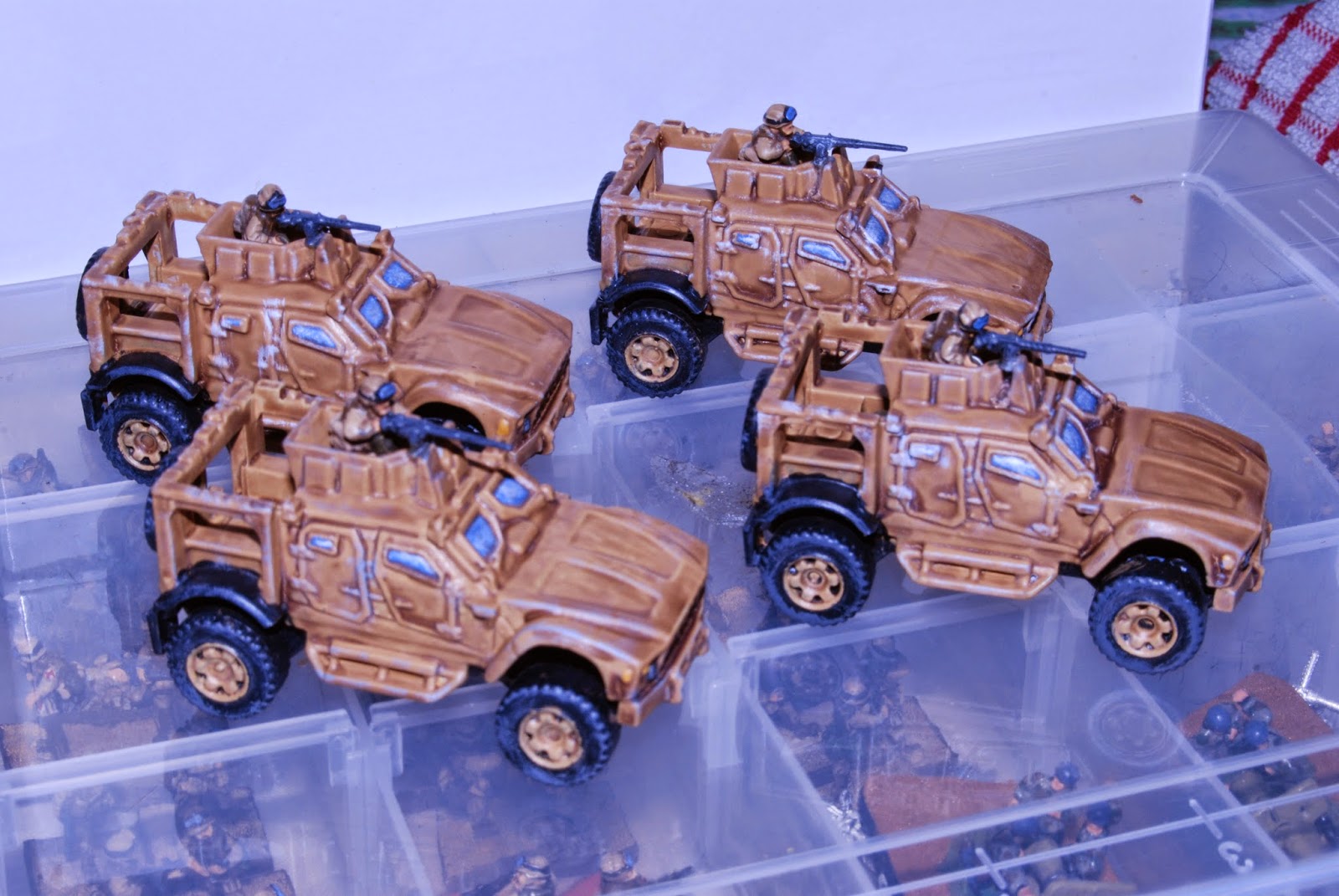 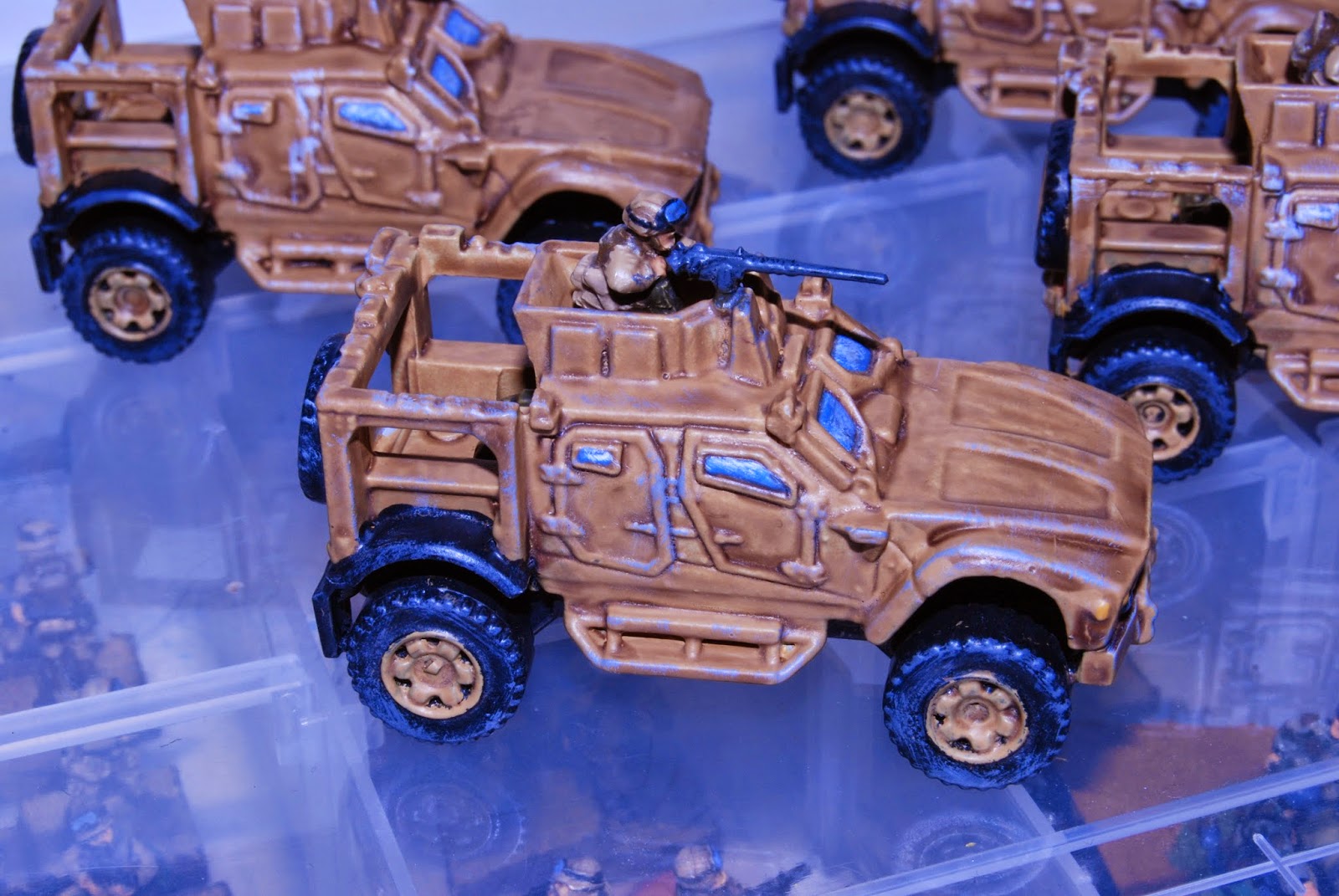 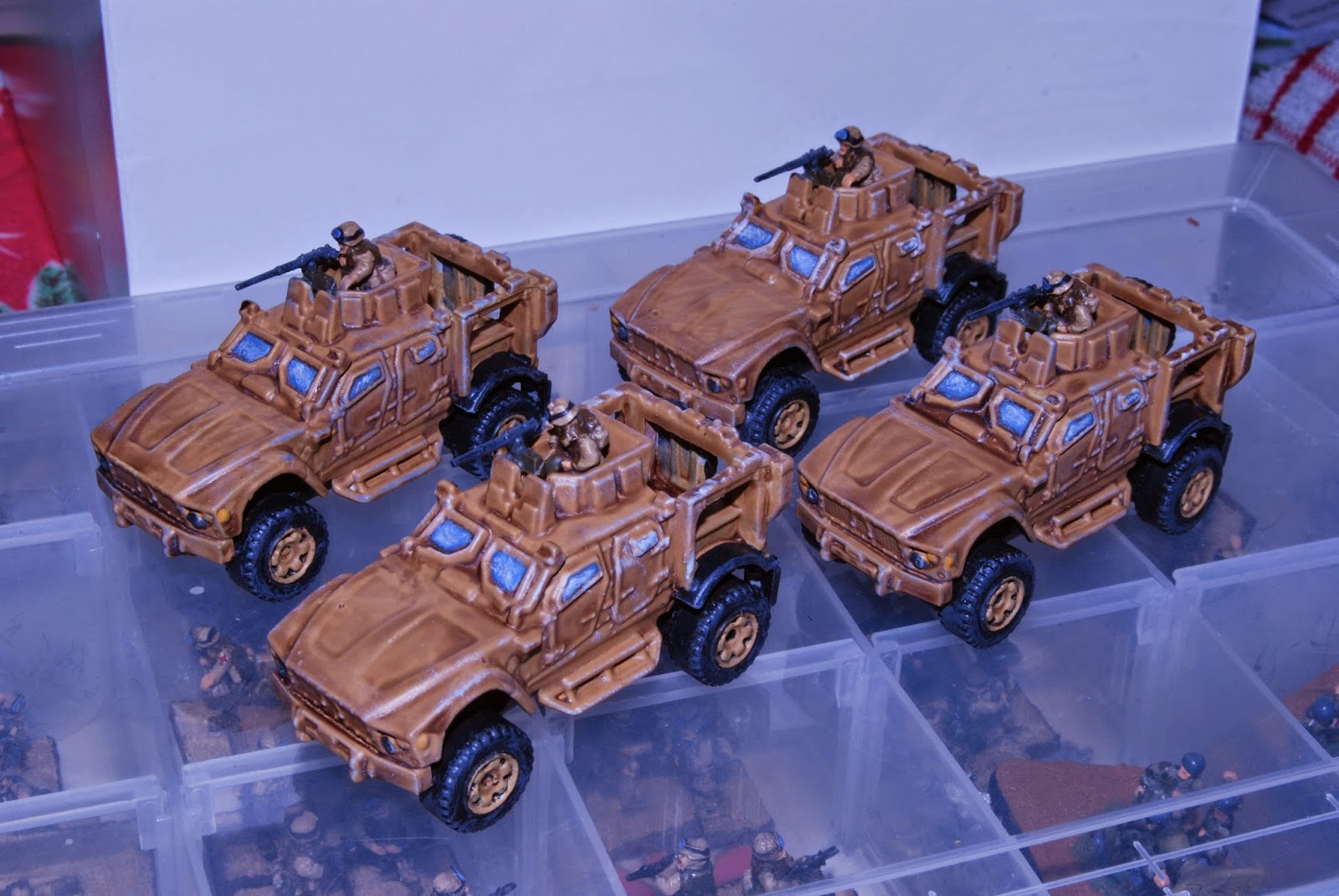 Thanks for looking.  Next in the pipeline will be my "Wild Geese" mercenary force.
Posted by Andy Canham at 08:59 2 comments:

Just before Christmas I converted these two Matchbox Coyote vehicles.  The open rear engine compartment and open side windows were covered with plasticard.  A balsa block and pair of HMGs (actually removed from the Corgi Jackals) were added to the roof to form a twin barreled remote HMG turret.  Undercoated light grey and painted light brown with flat earth splodges edged with chocolate (it was Christmas after all) - hey presto, a pair of lightly armoured recce vehicles for a modern/Sci-fi skirmish game.  Not bad for an investment for the pair of £2.60 plus paint and an hour or so of time.  Not sure of the scale for these vehicles, I think they are 1/84th but they look fine alongside based 15mm figures (see last photo), so I'm going to use them in that scale but suspect they wouldn't look too small alongside 20mm as well. 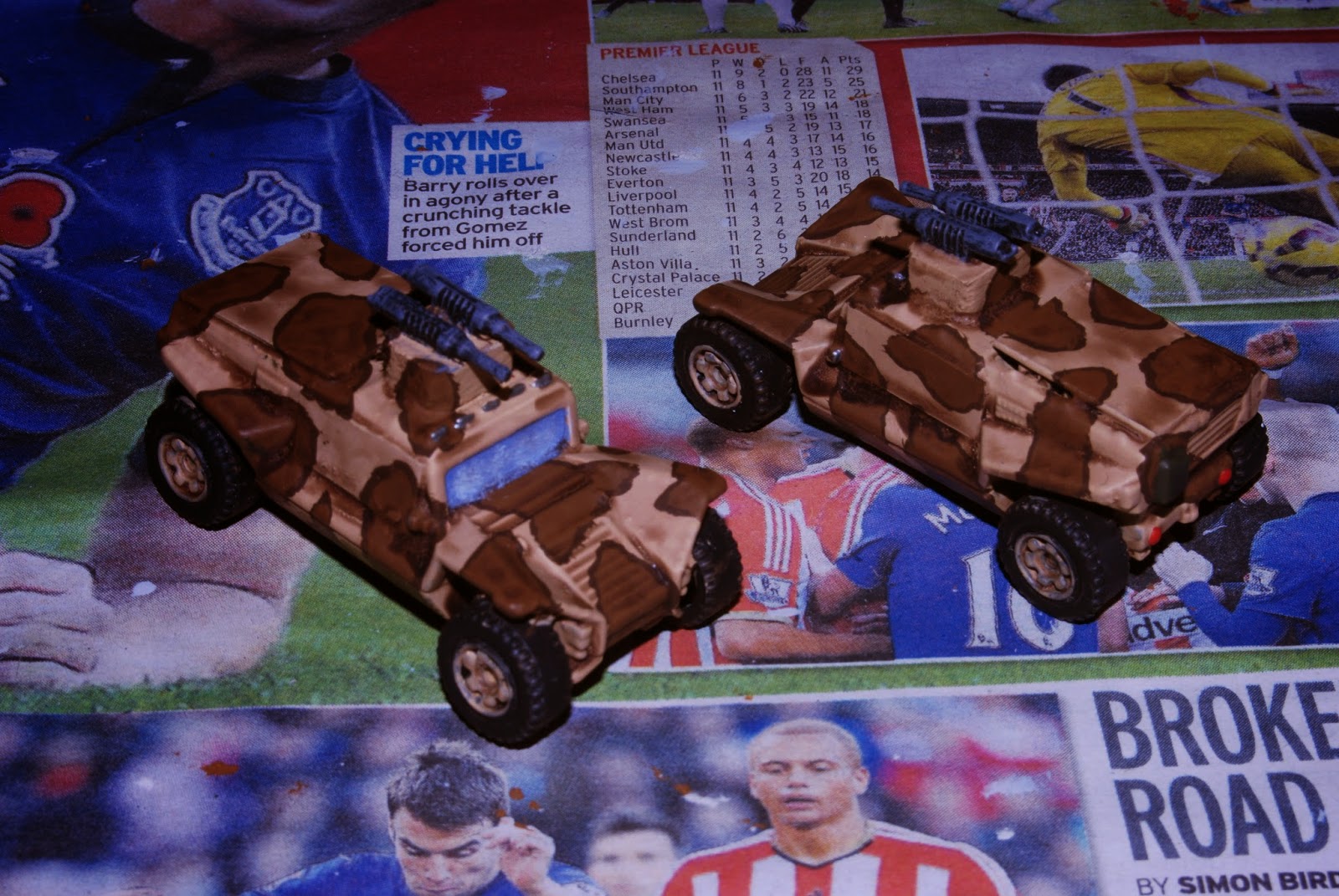 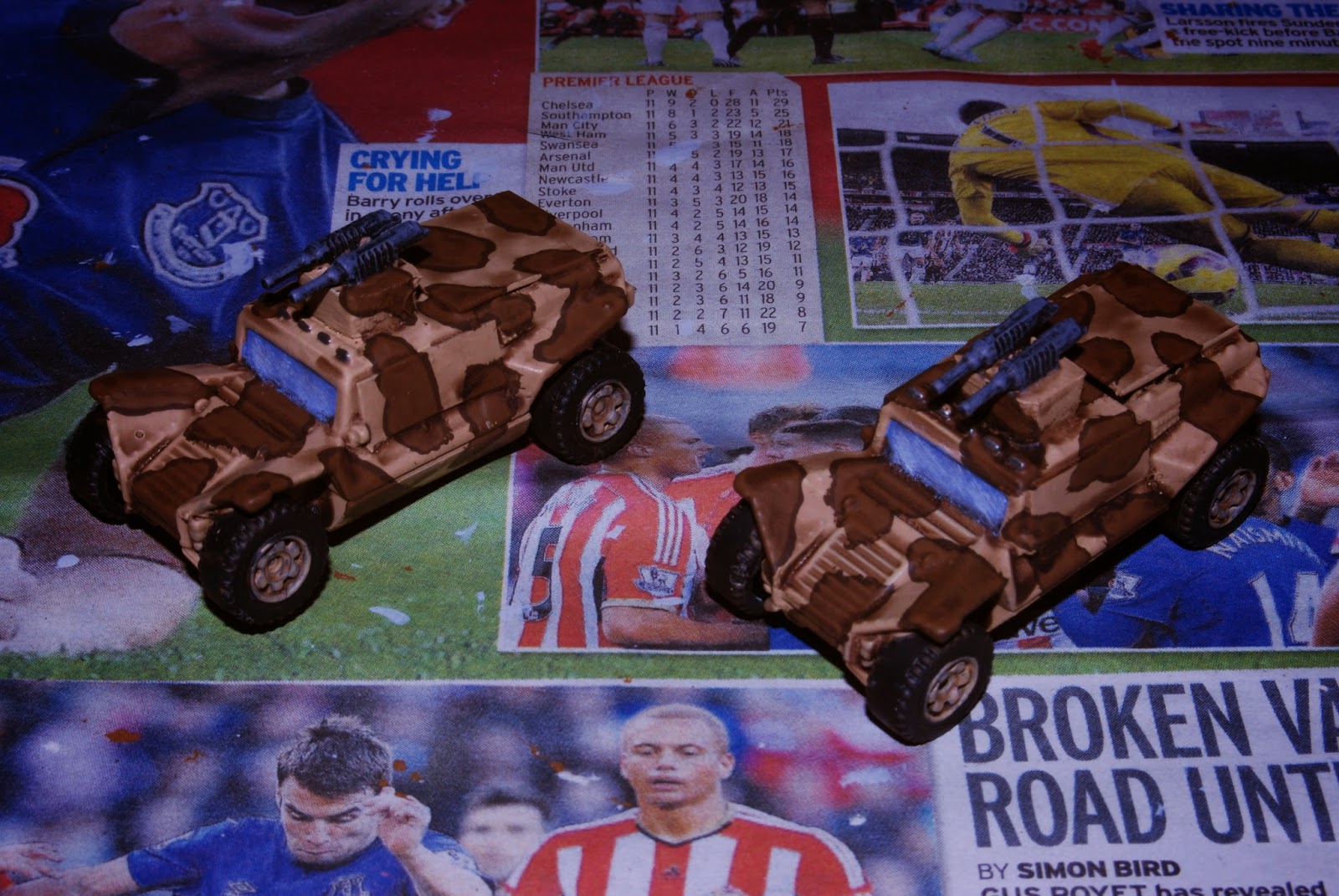 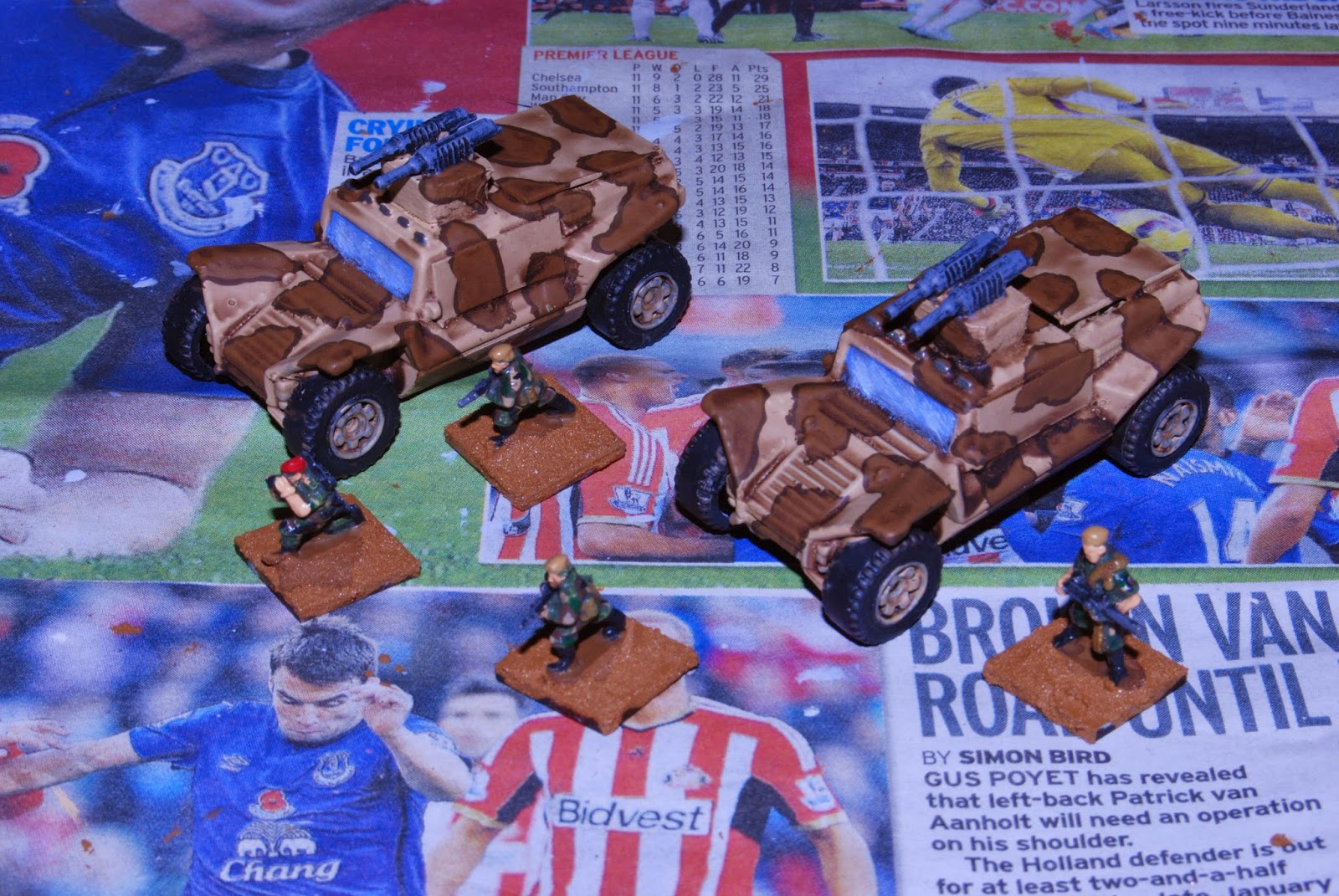 Thanks for looking!  Enjoy the rest of the holidays.
Posted by Andy Canham at 10:28 2 comments: