Saturday saw a club gaming weekend organized by Dave.  Ben, Mick and I were Soviets, exploiting a breach in the British (BAOR) lines stormed in a game at the club a few weeks back.  Soviets were advancing on table from the bottom of the view shown, crossing the fordable stream and attempting to push off the opposite table edge.  Lots of open ground to cross but precious few places for the BAOR to hide (Ian, Piers and Phil).  A pair of timed artillery strikes were positioned on the red X's on turn 1, in an attempt to catch any forward screen ATGMs or tanks deployed in the woods on the right or around the crossroads.  As it was, these strikes killed a Scimitar recce tank and pinned a deployed Milan team and Blowpipe team, and spilled some tea in dug in Chieftains. 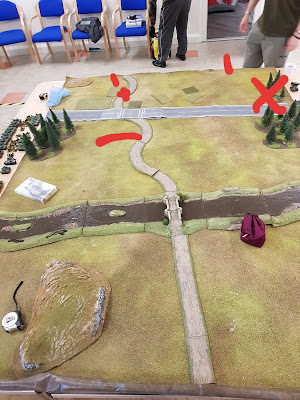 An SAS demo team had wired the bridge with C4, but the British CO obviously didn't trust his specialists as he made the bridge the scene of a timed Harrier strike, which gapped the bridge arch and pinned the SAS team.  As the Soviet horde advanced, the SAS recovered morale and bugged out, just before a Jaguar strike aircraft dropped its load or iron bombs on the far side of the bridge, KO'ing a recce T-62 hiding there.  Meanwhile, the Soviet vanguard wasted no time in closing up to the river and wading through the gravel and mud. 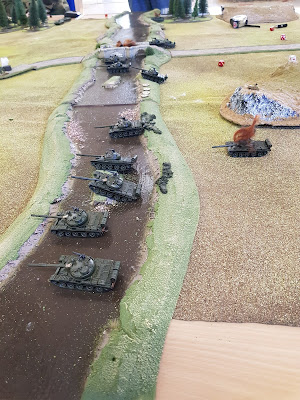 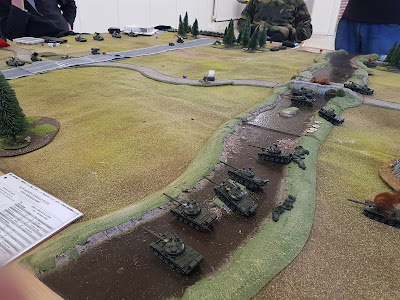 BAOR CO looking worried.  His 3 forward screen Chieftains nearest the road have been reduced to 2 through a catastrophic breakdown, while his vanguard Chieftain troop has moved and fired, with very limited success.  In the distance (off camera to the right) the Soviet T-80 vanguard rumbles forward. 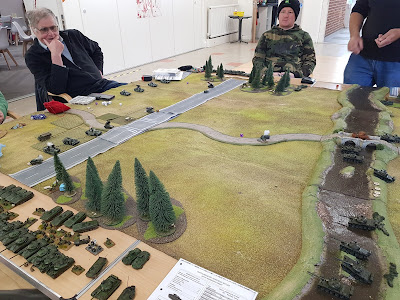 T-80s catching up with their older, less capable T-62 buddies. 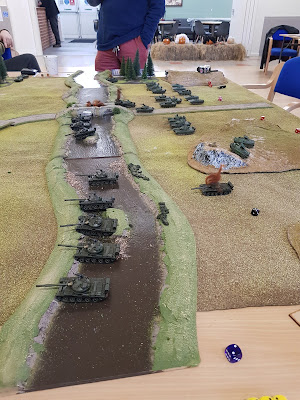 Two of the vanguard Chieftains are burning, taking tank losses to 3 for the BAOR.  Any further losses will equate to 2 chits per vehicle rather than a single chit. 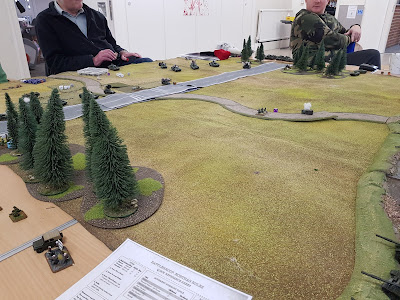 Moving in for the kill, T-80s and BMPs cross the stream en mass.  ATGM armed BRDMs wait on ambush fire on the hillock to the right and take the opportunity to fire at the BAOR CO when his Chieftain attempts to engage - BOOM!  2 chits for CO loss and 2 more for 4th Chieftain destroyed. 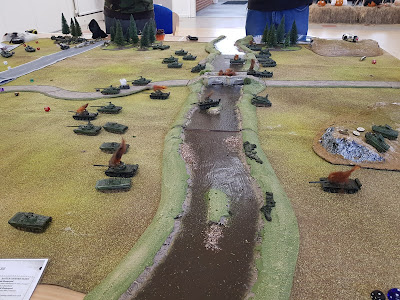 Soviet reserves in the form of a Hind flight arrive.  In the first round, ATGM fire brews up another Chieftain, as does a long range shot from a T-80.  A BAOR reserve mechanised infantry platoon rushes forwards in the far distance and disembarks into the little patch of woods next to the road, clearly forgetting the need to disperse in case of artillery or air attack.  The Hinds punish them with rocket pods, destroying them as a fighting force and bringing the game to an end pushing the BAOR through their break point. 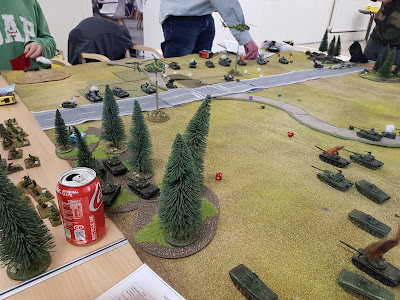 So, the Soviet war machine continues to rumble forwards having KO'd two troops of Chieftains and a full mechanised infantry platoon, plus some odds and ends of recce vehicles.  Admittedly, the T-62 company has been reduced to a platoon and one of the T-80s was lost, but the Soviets considered casualties light given the amount of open ground they needed to cover.  For big games, the points for a recovery vehicle could be well spent and artillery, air and helo assets are worth their weight in gold when up against a Chieftain heavy opponent.

A great game, looking forward to the next one in December.  Thanks for looking.