I've finally wrapped up my forces for the upcoming gaming weekend in Dungworth this coming April.  Set in the fictional Black Sea country of Andreivia, where local militias of Turkish and Armenian origins are about to struggle with each other for control of the capital city, Tcherbevan, with interference from "Russian" forces who want Andreivia to remain in their sphere of influence and NATO/UN "peacekeepers", who want Andreivia in theirs.  Sound familiar?  A case of life imitating art if ever there was one.

Anyway, representing the Andreivian Turkish forces, I have built up militia forces based on various manufacturers Taliban (Britannia and Underfire Miniatures) and Mujahideen (Mars plastics).  At the front is a four man HQ group, two man spotter team, two three man mortar teams and an SPG-9.  Behind them are four 6 man teams, all AK-47/74 armed, one with RPG-7 and one with a PK 7.62mm LMG.  To the left are the mobile forces in "technicals" (base models courtesy of Tesco's and repainted by me) with a DShK AA MG, and SPG-9 and one transport for 6 AK-47/74 armed militants.  These guys represent the Andreivian Liberation Army (ALA). 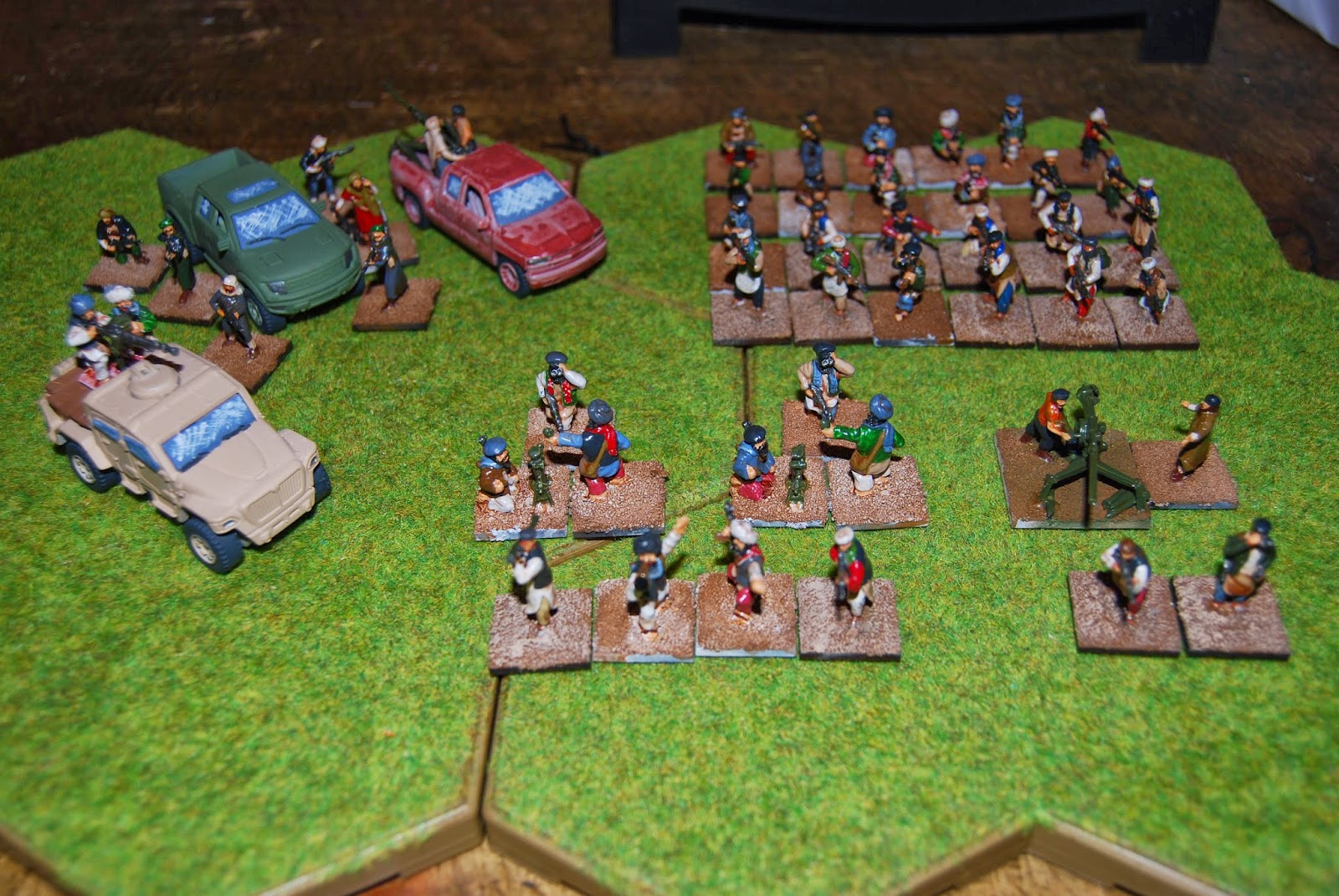 The "technicals" in more detail. 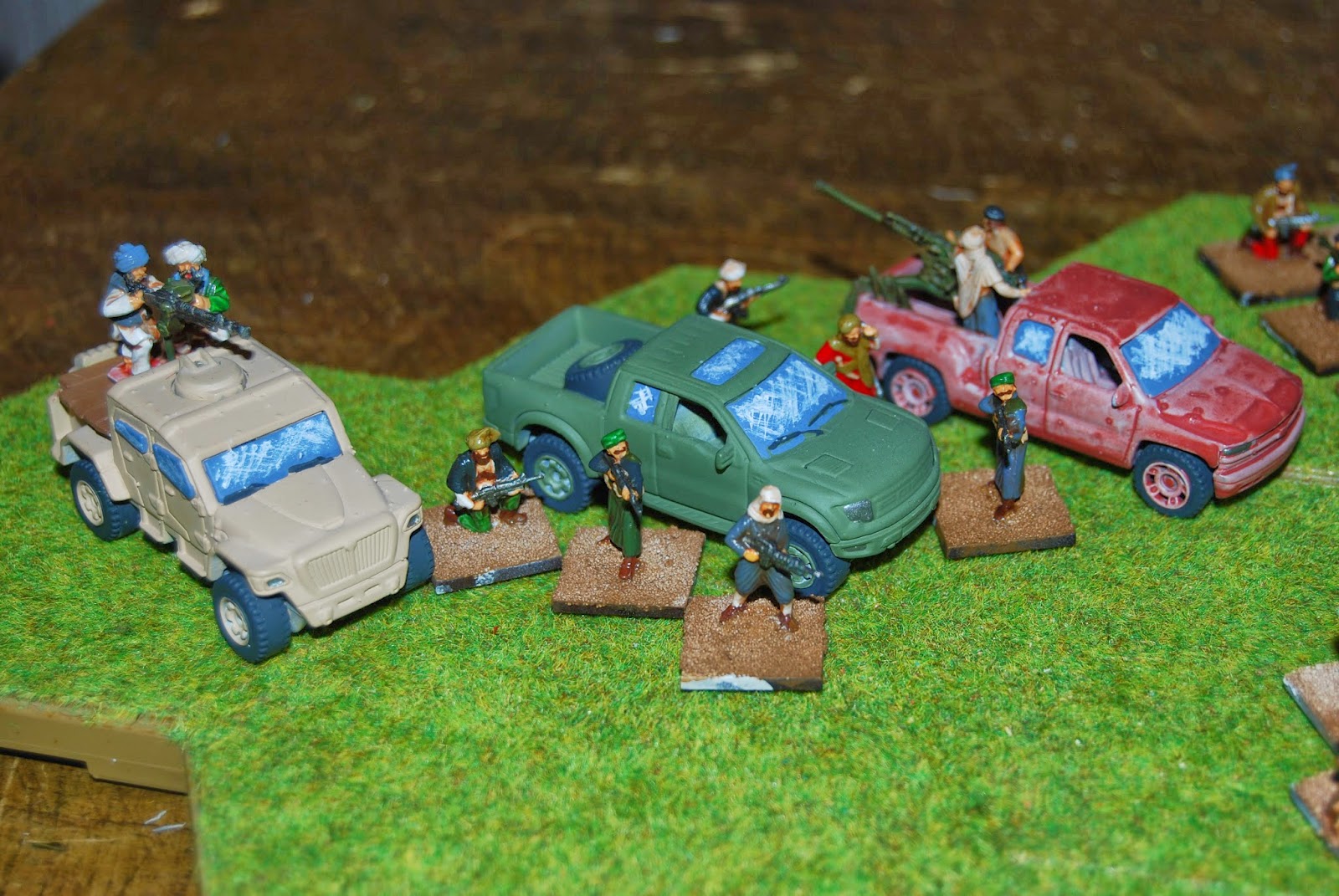 The militia - a colourful bunch. 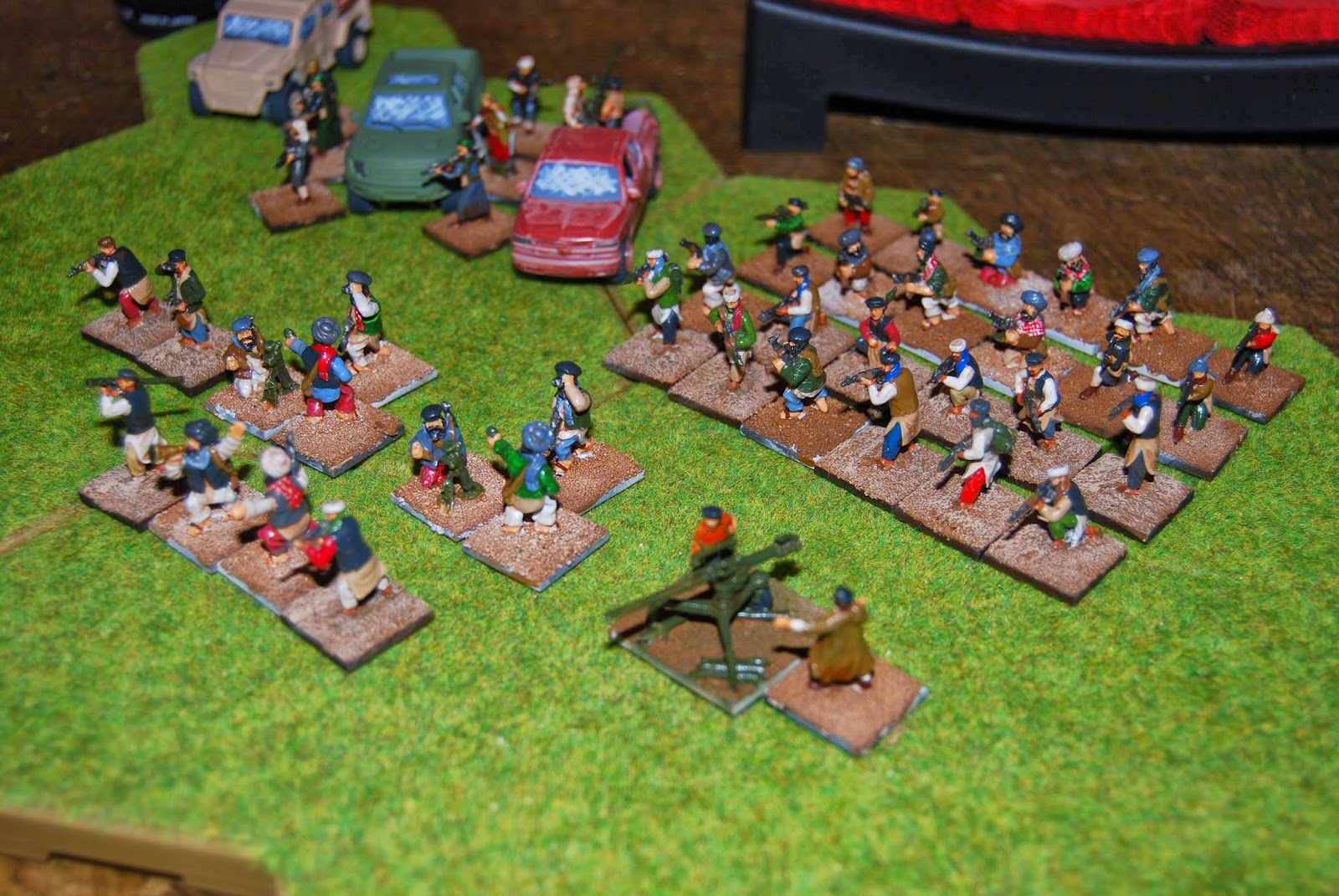 Fighting alongside the ALA forces are a more urban force, mainly ex-Soviet cold war heroes who are unsatisfied with the current attempts by Andeivians of Armenian origin to take control of the country.  These guys are also armed with mainly ex-Russian equipment and they have also liberated some ex-Soviet hardware from armt reserve depots and even museums in order to get some armoured assets, which include a BMP-1, T34-85 and IS-3.  There's also a Challenger, if I can persuade anyone that they managed to steal one from a NATO base.

The urban militia from the Anti-Armenian/Revolutionary Army Coalition (AA/RAC) comprise a three man HQ (including a beautiful, ruthless female sniper/assassin) with attached two man SPG-9 team.  There are two teams of seven, all armed with AK47/74, each with one RPG-7, one LAW and one PK 7.62mm LMG.  There's also a motorised team in the BMP-1 comprising another seven man team like the others, with a two man AT-5 Kornet/Spriggan ATGM team. 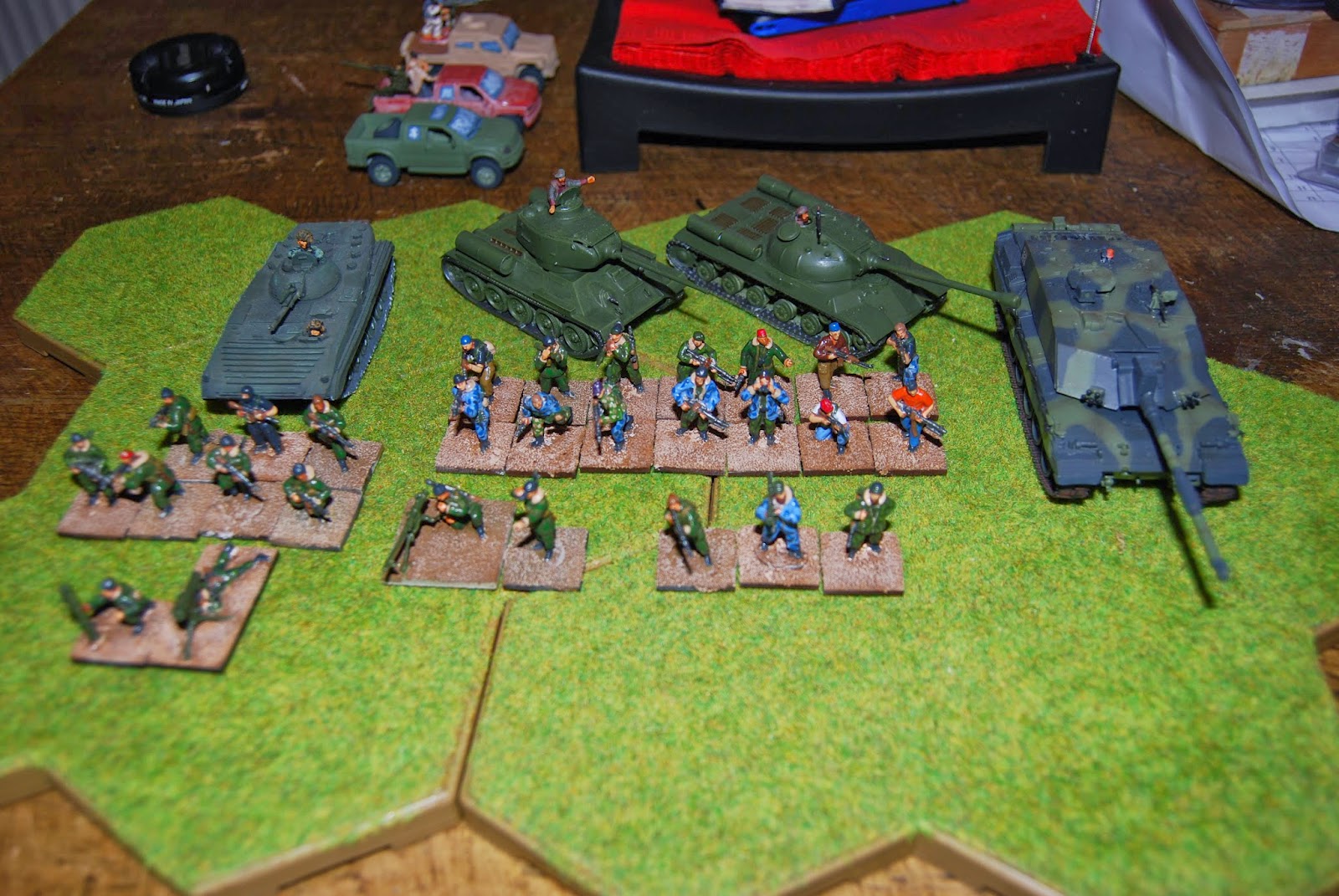 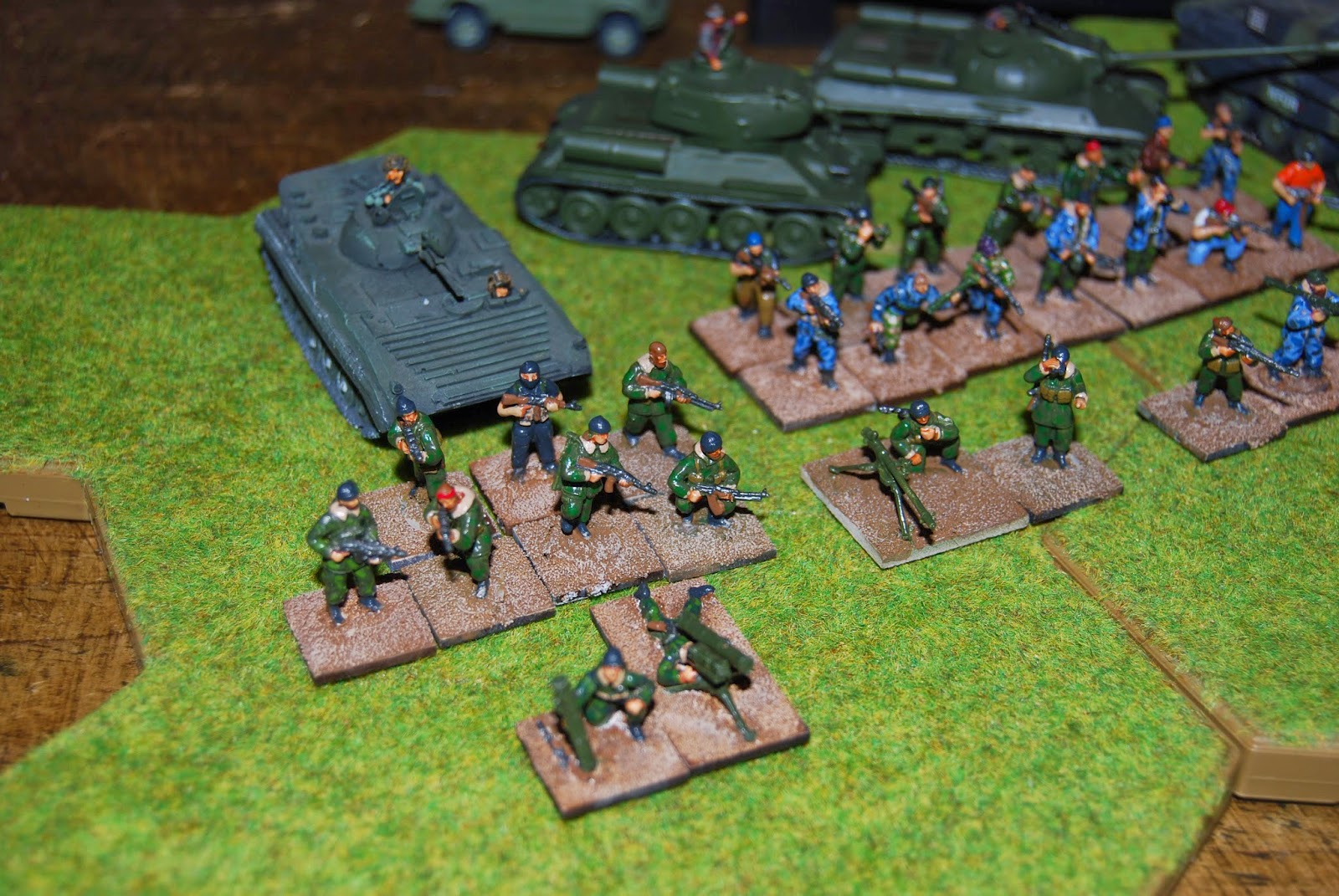 The leg infantry and armoured support. 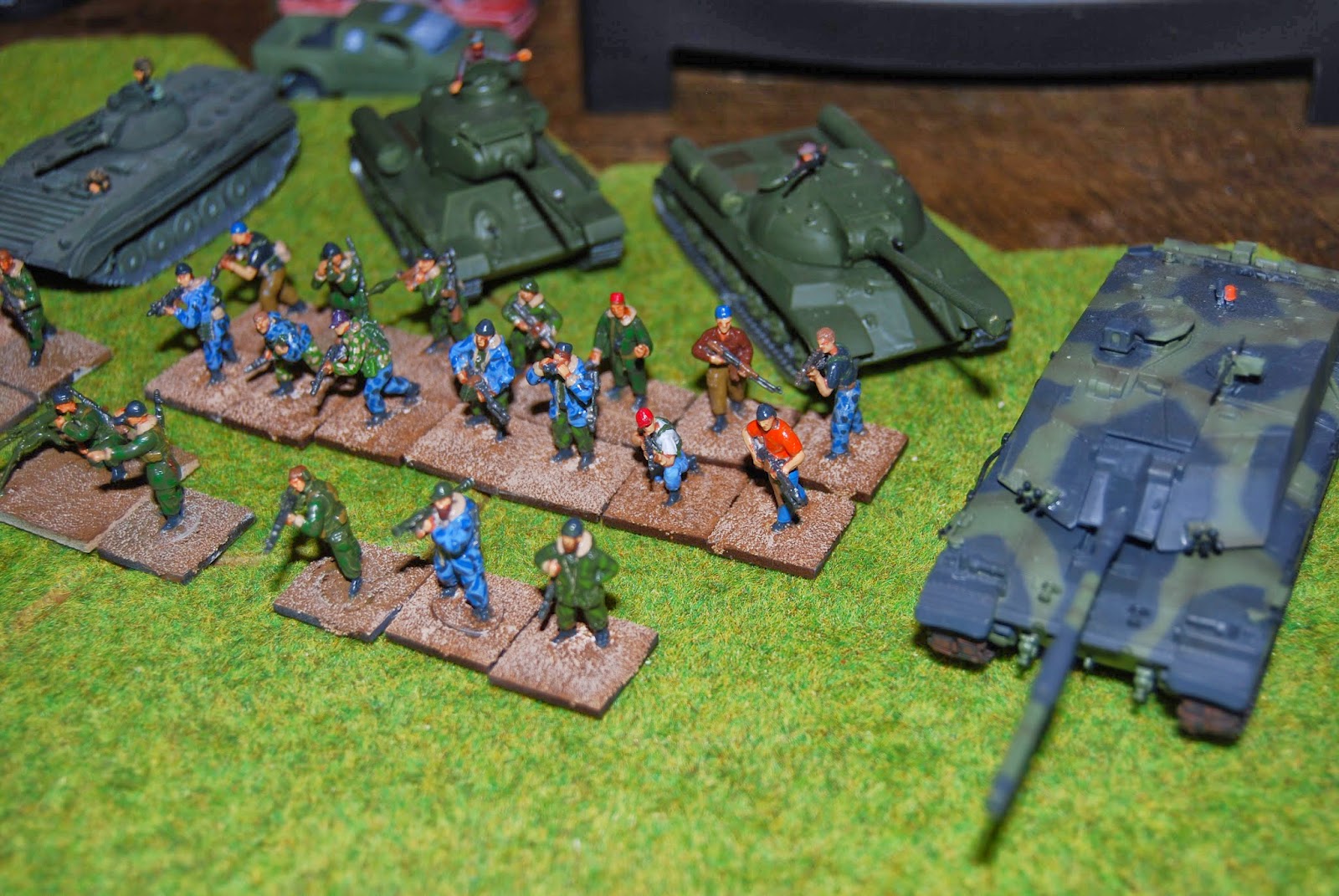 Should be enough forces to last me the weekend for Crisis Point 2014, especially if we recycle casualty figures.
Thanks for looking.﻿
Posted by Andy Canham at 22:43 2 comments:

Last Saturday a group of dedicated wargamers got together at a secret venue in Ellesmere Port to play Flames of War.  Six players, each 2000 points of Late War Normandy lists.  On the Allies right was Aiden with a British Infantry Company, in the centre Dennis with a mixed US armour/infantry list and lots of artillery and on the left Dave with a British armoured squadron.  Squared up against this allied might was Phil on the German right with lots of Jagdtigers (Normandy!!!???), Rick with a PzIV armoured kampfgruppe and myself on the left of the line with an SS panzergrenadier company.

Dennis, the allies "El Supremo" briefs Dave on his defensive tactics - hide and, if he spots you, run - he is facing Jagdtigers after all.  Meanwhile, Rick, aka Guderian, takes an oblique aerial shot from his Storch.  View looking across the table, Germans deploying on the right, allies on the left. 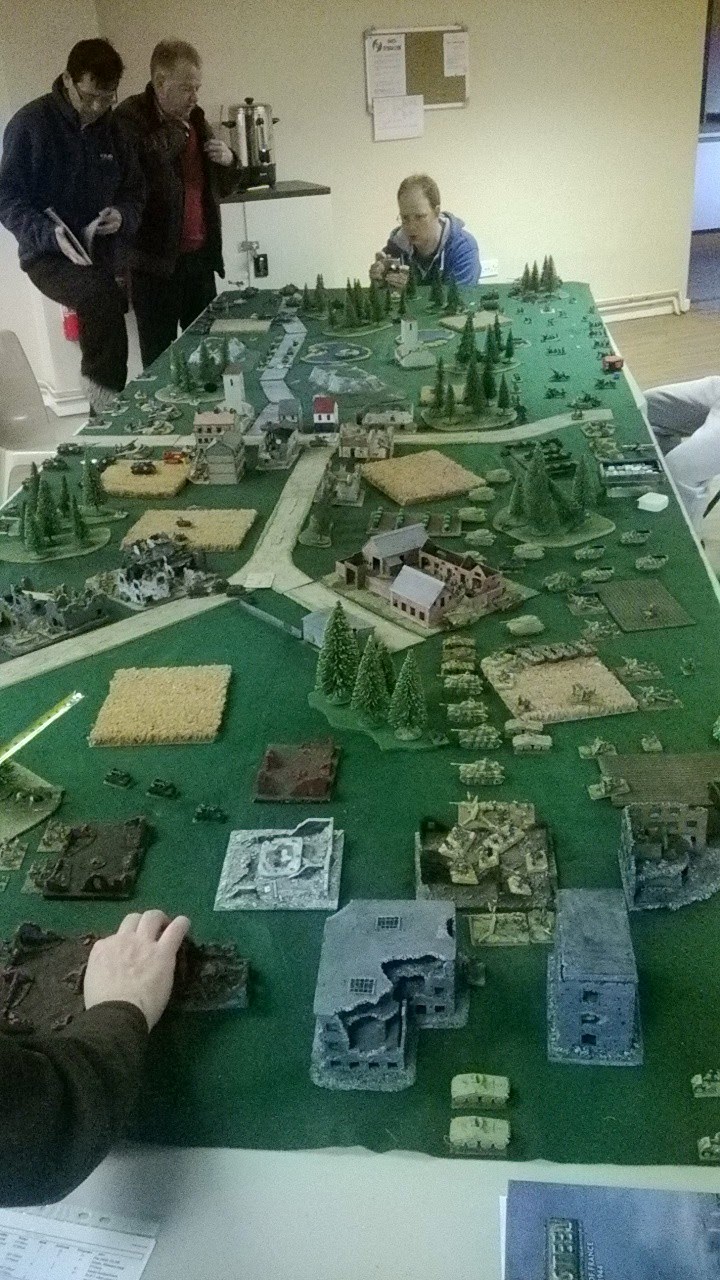 Aiden, feeling a bit isolated, and ganged up on, on the allies right. 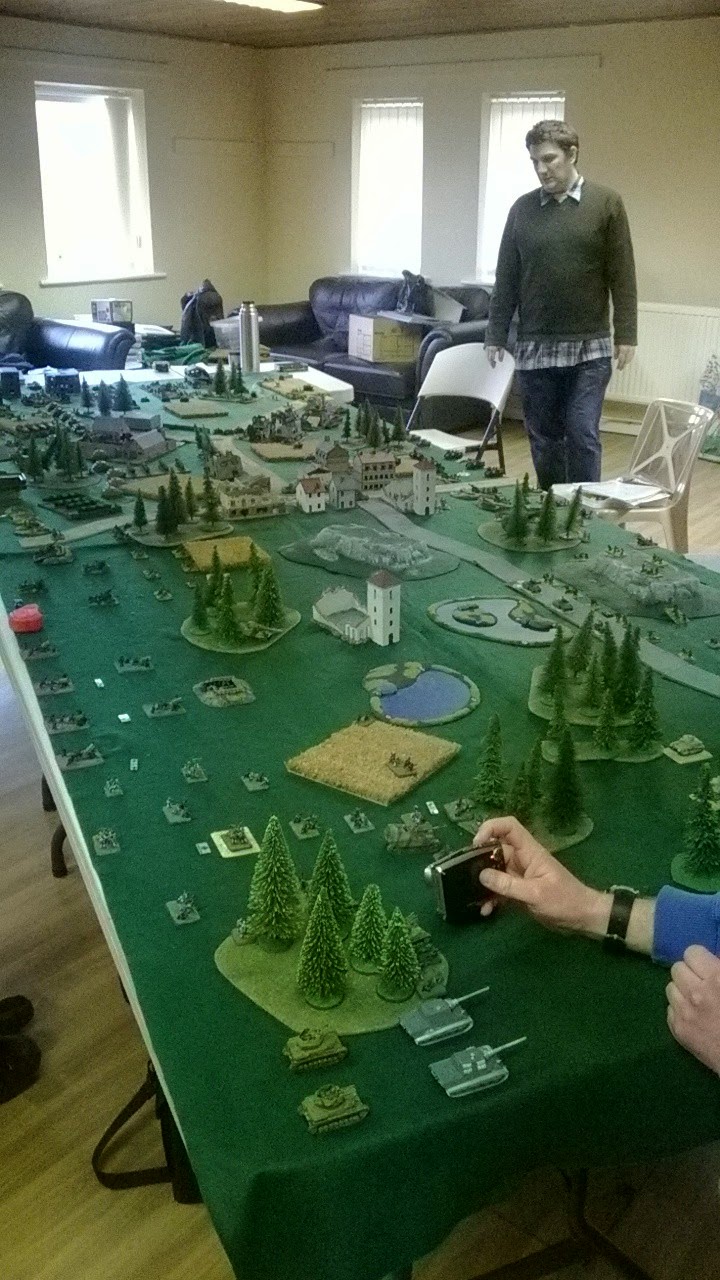 The might of a Panzergrenadier company supported by PzIVs, 88s and a 105mm battery, ready to start to contest the ruins on the German left. 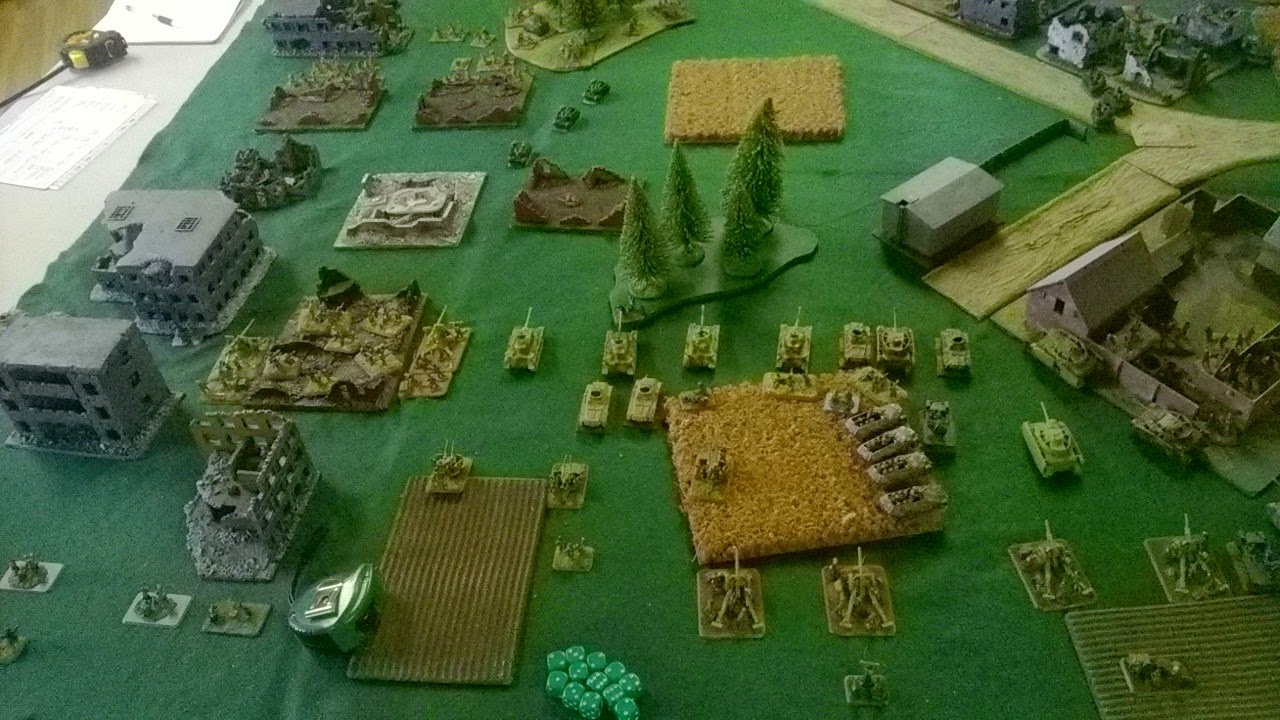 The rear area of the Pzgrenadiers with a mortar platoon and 75mm IG section. 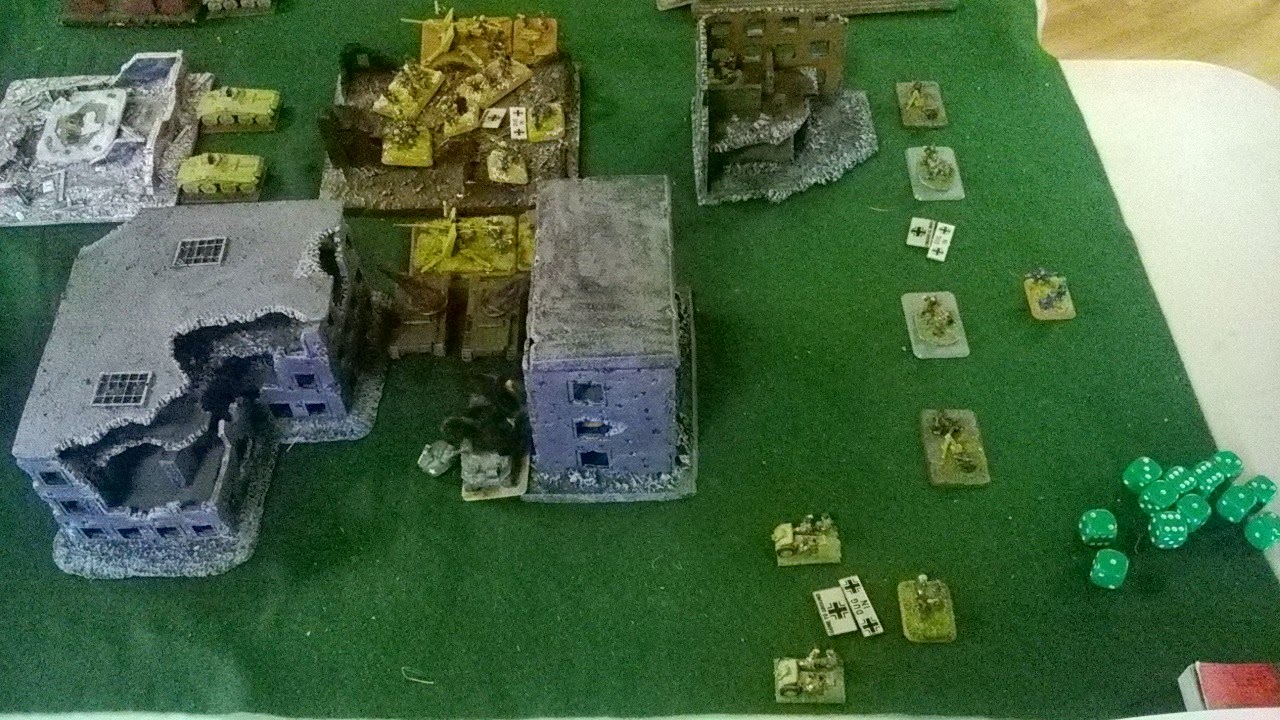 A nice solid firebase with a grenadier platoon hunkered down in the ruins, flanked by dug in 88s. 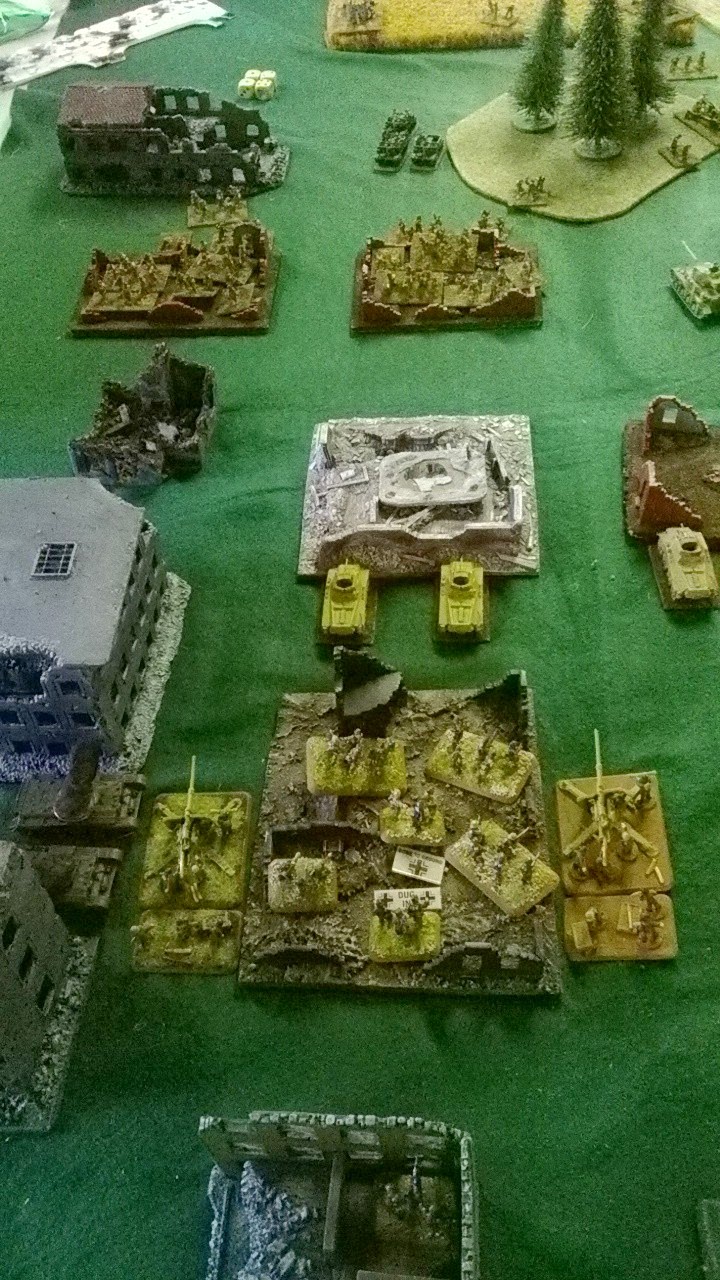 The objective farm sited along the boundary between my Pzgrenadiers and Ricks panzers, scene of some early attempts at coup-de-main by Aidens recce carriers. 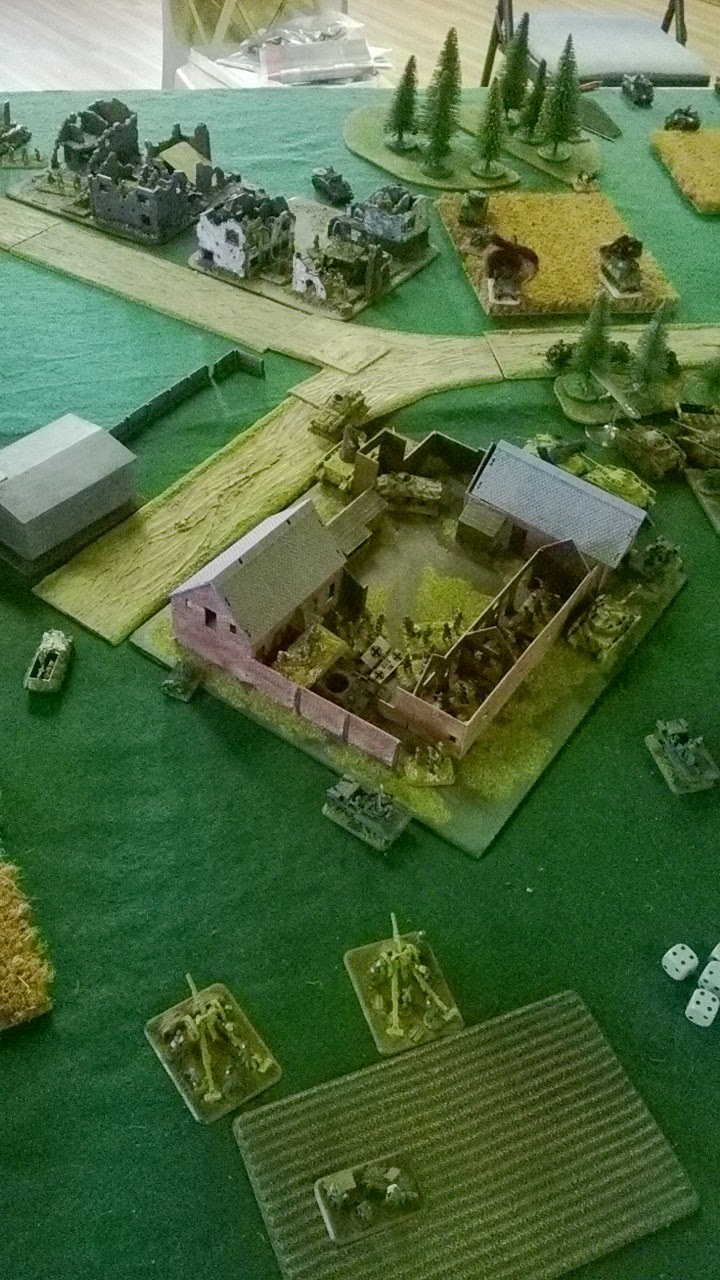 The scene of my first successful close assault by a Gepanzert platoon, two of Ricks recce armoured cars lifted Aidens defenders gone to ground status allowing the Sdkfz 251s to eliminate them and take the objective. 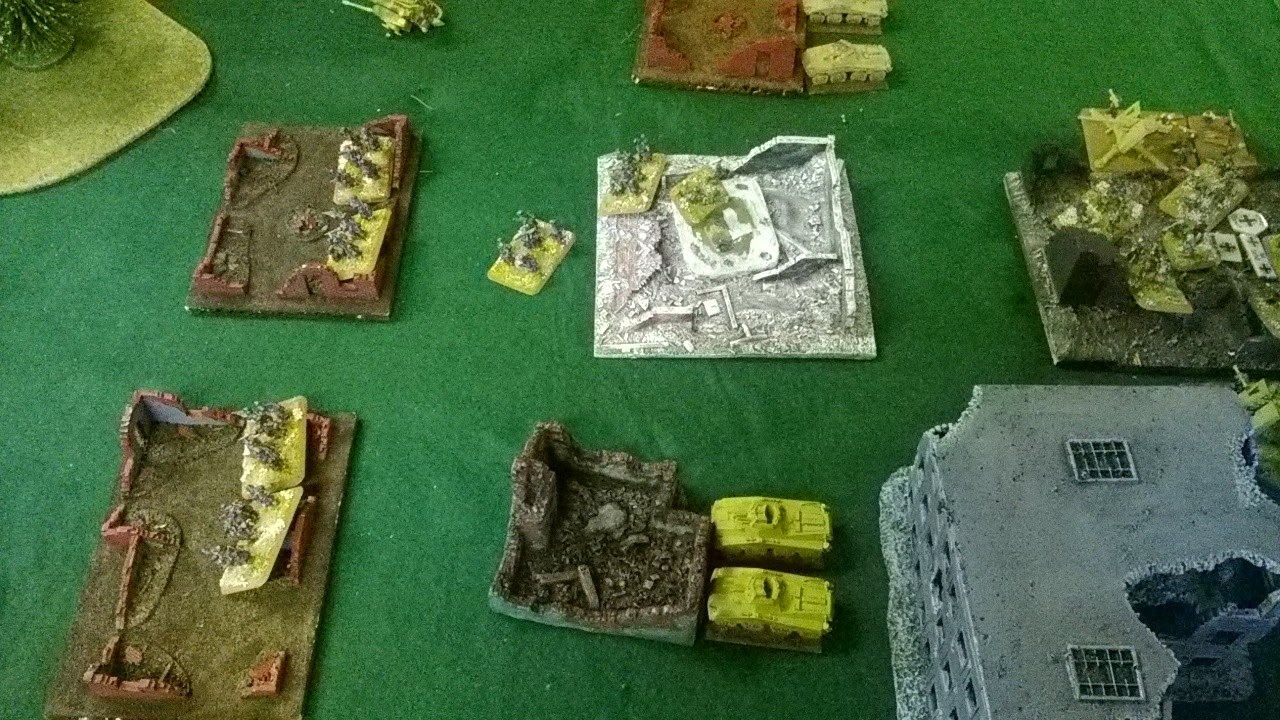 The village on Aiden's flank with Dennis, the scene of Ricks wild PzIV ride and the furthest German advance of the day. 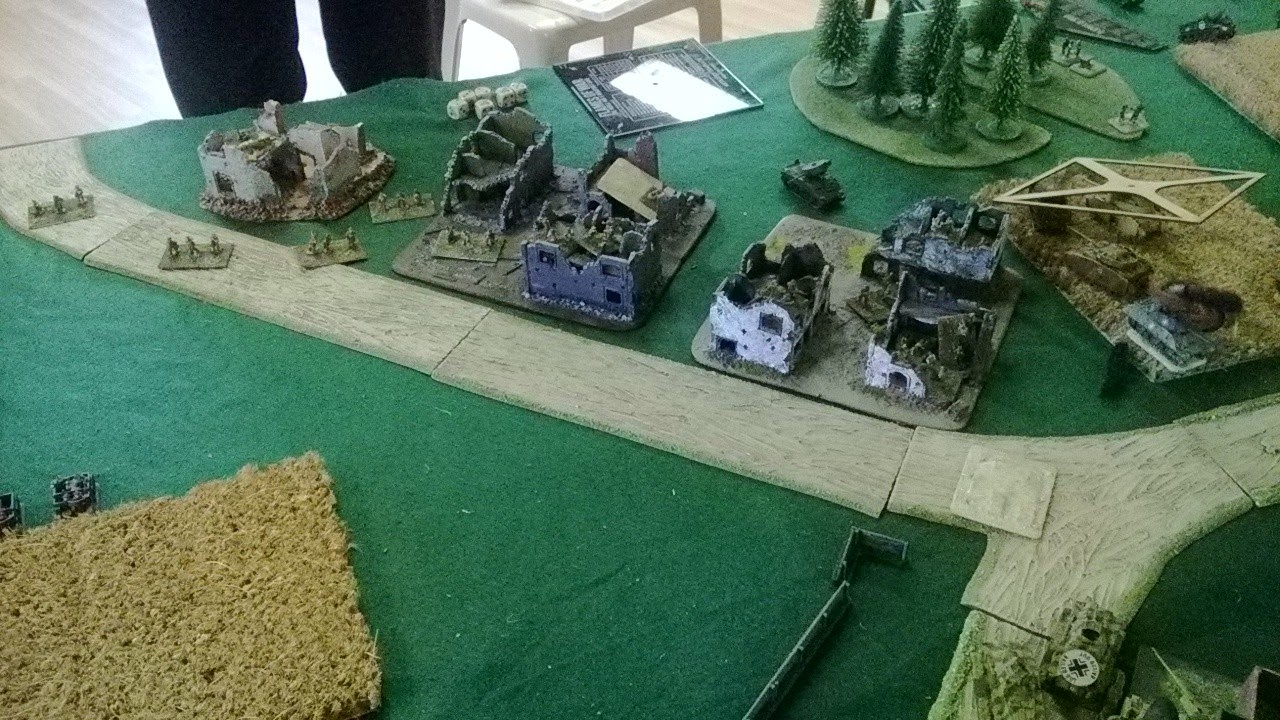 Unfortunately, in the heat of battle I neglected to take a more comprehensive set of photos.  My Pzgrenadiers and Ricks Pzs ganged up on Aiden, significantly wearing down his forces.  On the German right, Phils Jagdtigers advanced slowly on Dave's troops, surrounding themselves with burning Stuarts and Shermans.  However, their advance was too slowand Dave's dogged resistance meant his sector scored highest for the allies.  In the centre, Dennis's US artillery park was spectacularly ineffective, although his armour slugged it out with Ricks panzers, effectively neutralising both armoured forces.  Dennis cleverly held the village objectives and infiltrated infantry through to contest German held objectives, thereby cutting a lot of victory points off the German total.  On the German left, Rick and I held our objectives and took one of the ruined town objectives from Aiden, but his recce carriers kept the objective contested so no points there.  Overall, the allies won a victory in terms of objectives held and contested, although at the cost of the loss of both British flank forces and a significant portion of the US armour in the centre.  The German centre lost a lot of PzIVs and I lost my only PzIV troop (the first outing for my PSC PzIVs so no surprise at the poor first showing), but Phil's Jagdtigers were almost unharmed (loss of a Wirblwind section and one Jagdtiger only).

All in all a really fun game.  After playing several games of FoW, I'm finally beginning to see the nuances and subtleties of the game.  Still not sure how close to WW2 it is but it does give a fun game and the feel of the game is getting better for me.  Thanks to all involved, especially Aiden for the scenario, Rick for the scenery and inviting me, and Phil for the venue.

Thanks to you too for looking.

These are the rigid raiders and rubber inflatables that I painted up for my 1985 USMC forces last year.

First up on the right we have three rigid raiders with passengers and crew from Scotia ship to shore range (STS053) plus, on the left, a rigid raider with crew and LMG (Scotia STS054). 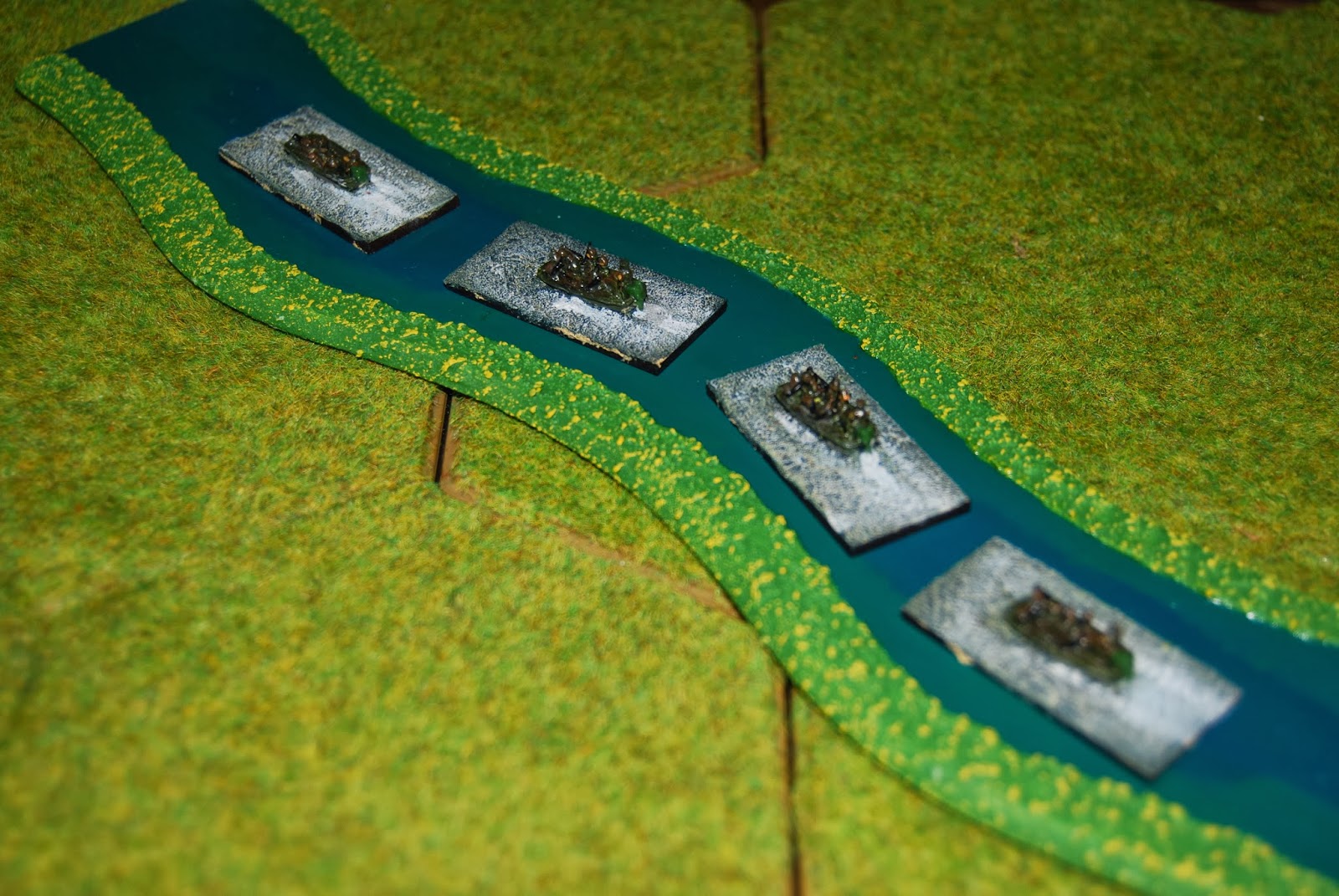 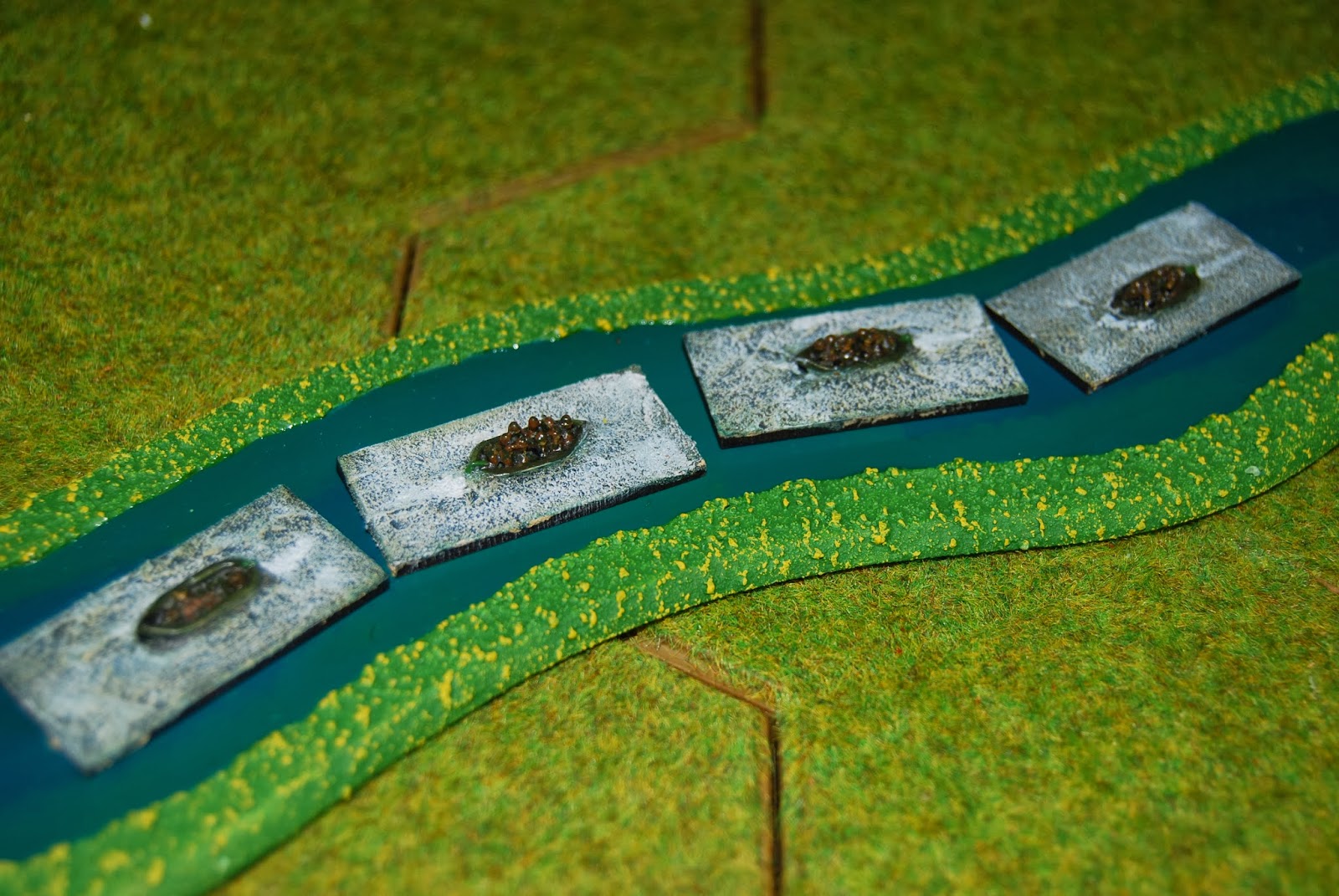 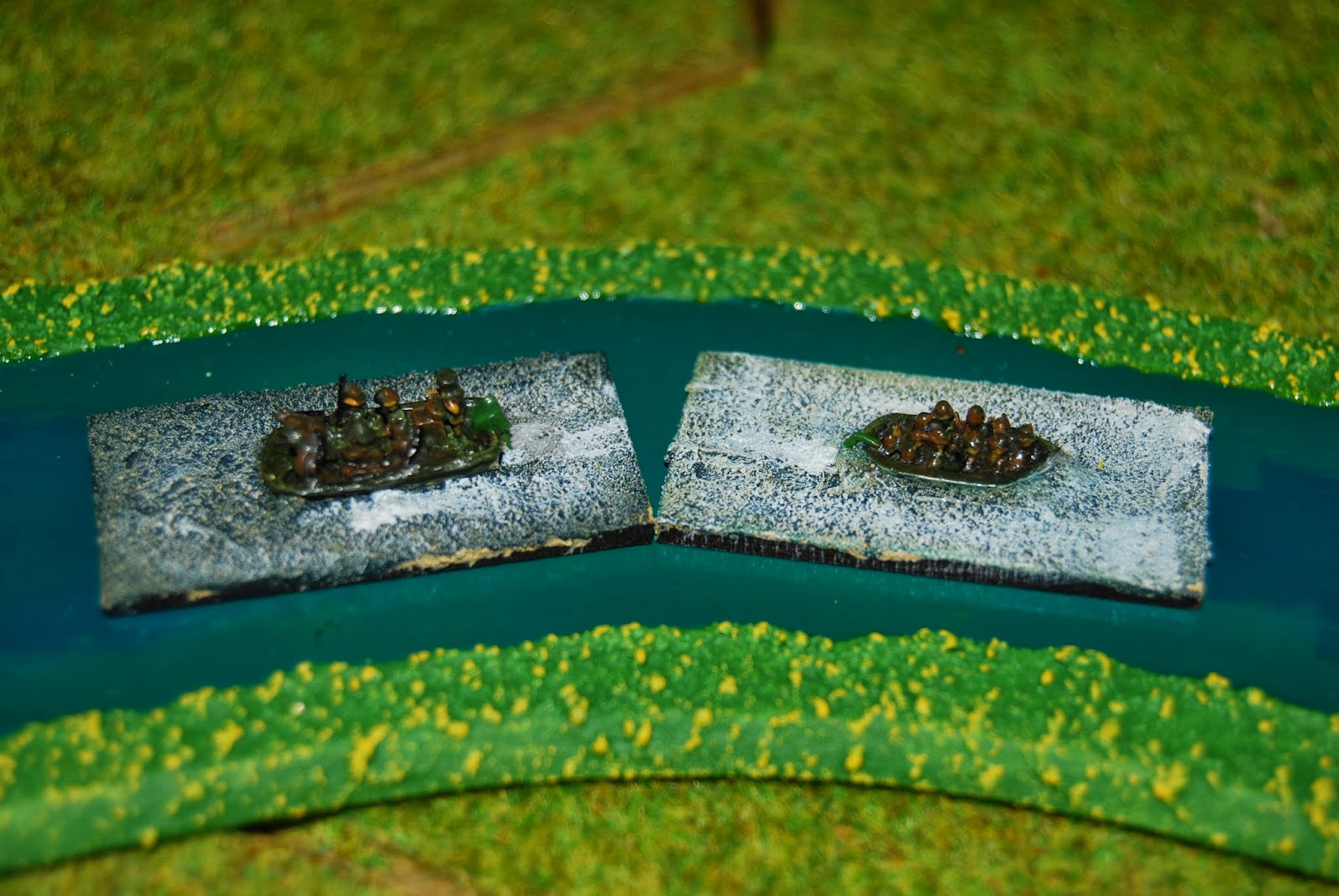 Thanks for looking.
Posted by Andy Canham at 21:42 No comments:

Here is the French heavy bridging equipment available to support the armoured division.  First off on the left is an EFA amphibious ferry in travel mode (Scotia FM0046).  On the right is the Leguan bridge layer, again in travel mode.  Note the AMX-30 stand on a 40x20mm base in the middle for scale - the big boys are mounted on 80x20mm bases. 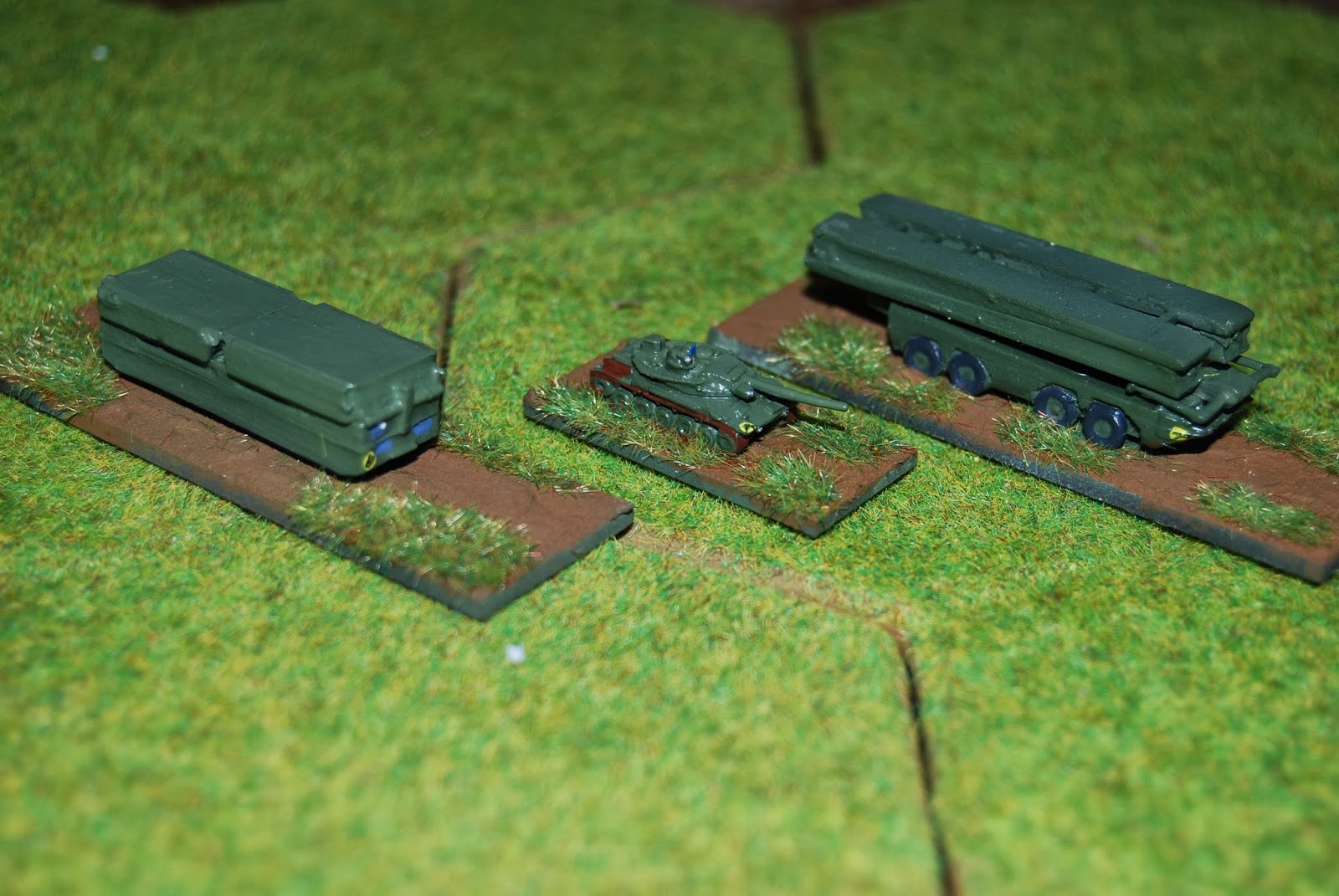 Here are two of the massive PFM pontoon bridge sections mounted on their articulated flatbed trailers.  Each model comes with either a ramp (Scotia FM0052) or centre section (Scotia FM0051) deployed and in travel mode.  Again these are mounted on 80x20mm bases, with an AMX-30 for scale. 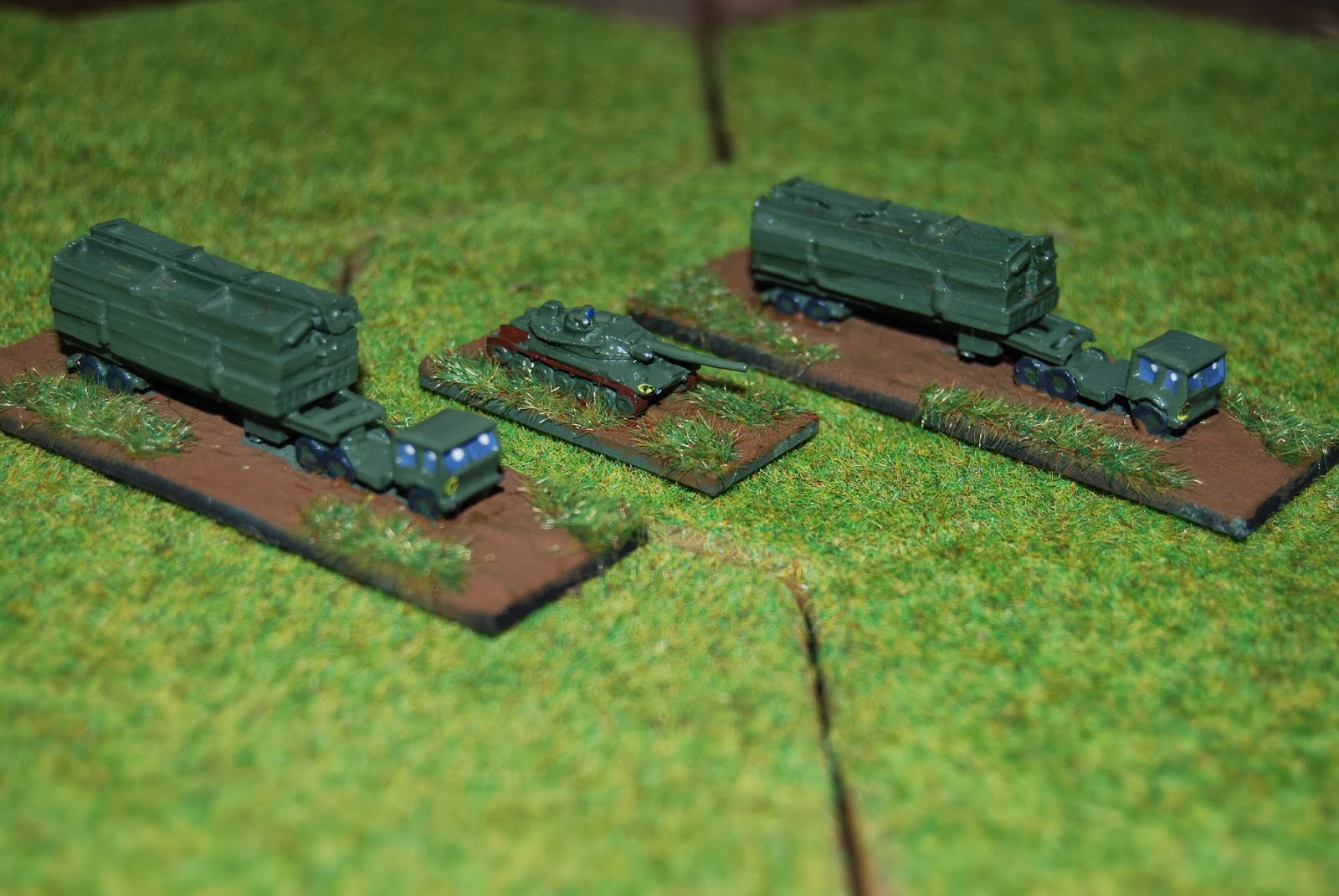 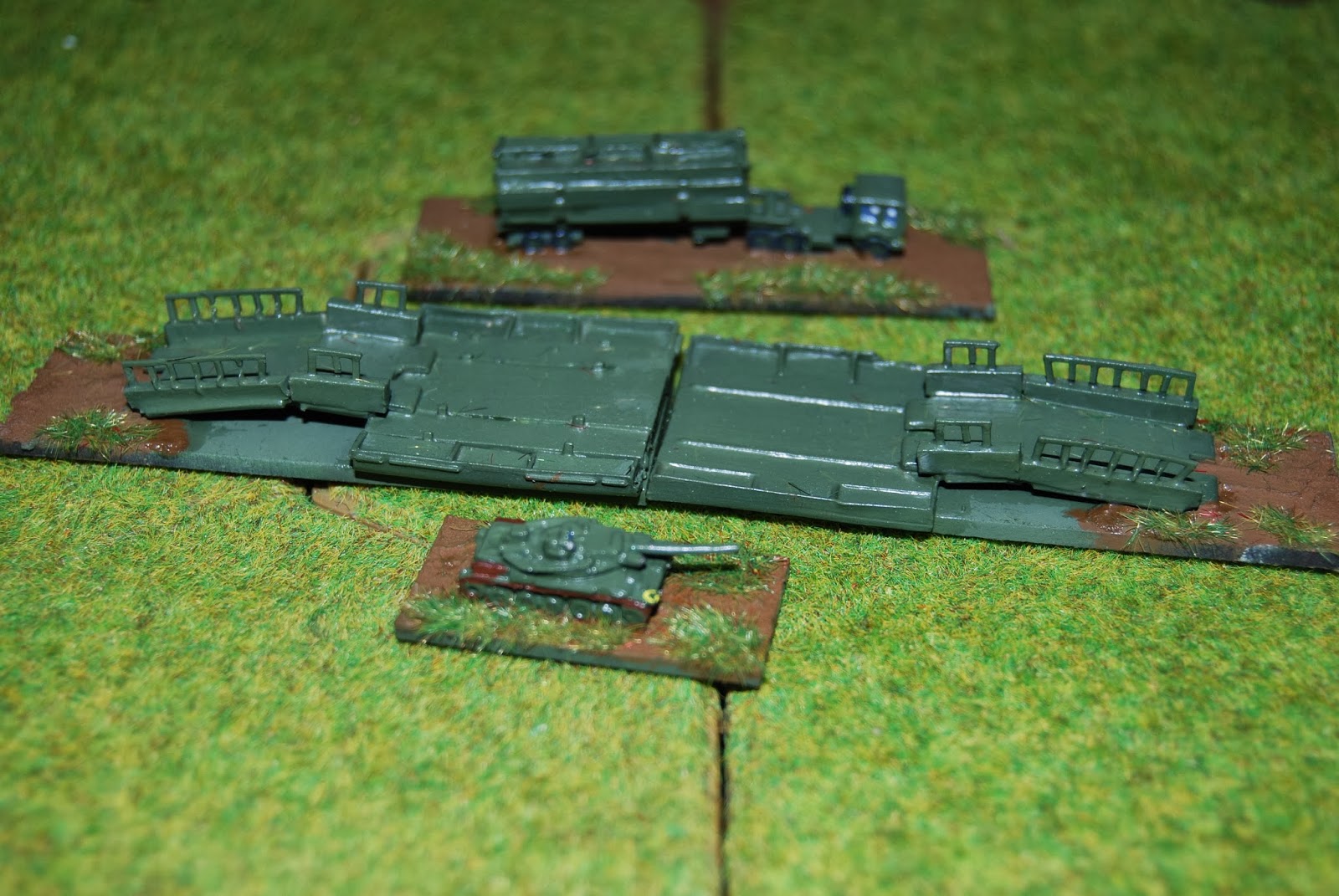 So, these various bridging assets should allow the French to cross any river obstacle up to a scale of 120mm, provided the enemy don't interfere.

Thanks for looking.
Posted by Andy Canham at 17:15 2 comments:

The look I'm aiming for, but in plain green drab rather than the later tri-colour scheme and with the jib folded back and dozer blade lowered.. 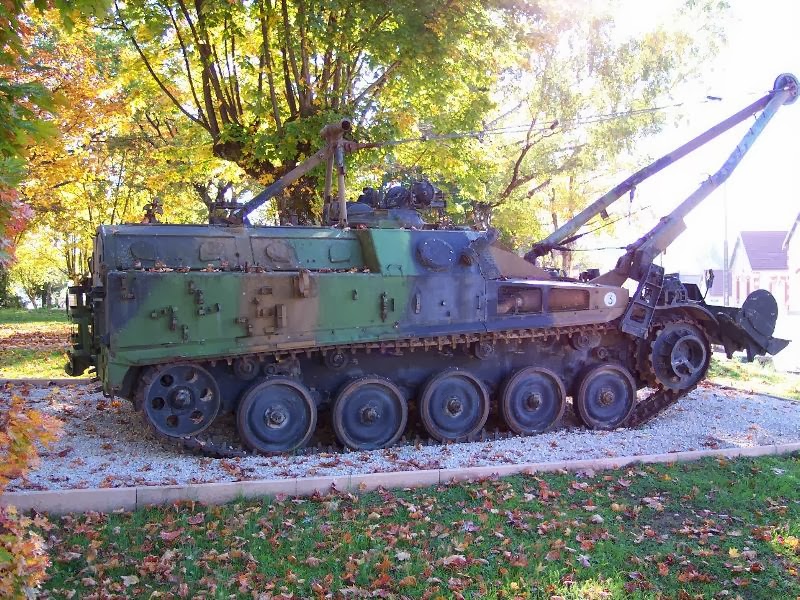 As no one makes these in 6mm, I decided to try a conversion of my own.  I picked up two packs of AMX-VCI from Heroics and Ros, from the old Davco/Skytrex range they bought out last year.  I also picked up a pack of 10 dozer blades on e-bay from Keep Wargaming (some of their old Davco stock).  To this I added  a couple of packs of 1 tonne trailers from the neutral equipment range at Scotia.  To create the jib, I used some copper wire from Hobbycraft, bent into a suitable shape, with an offcut of plastic strip to act as the winch and jib support.  Once the jib and support were superglued into place, the dozer blade was attached to the bow of the AMX and this, with the trailer, was mounted on a suitable mdf base and painted. 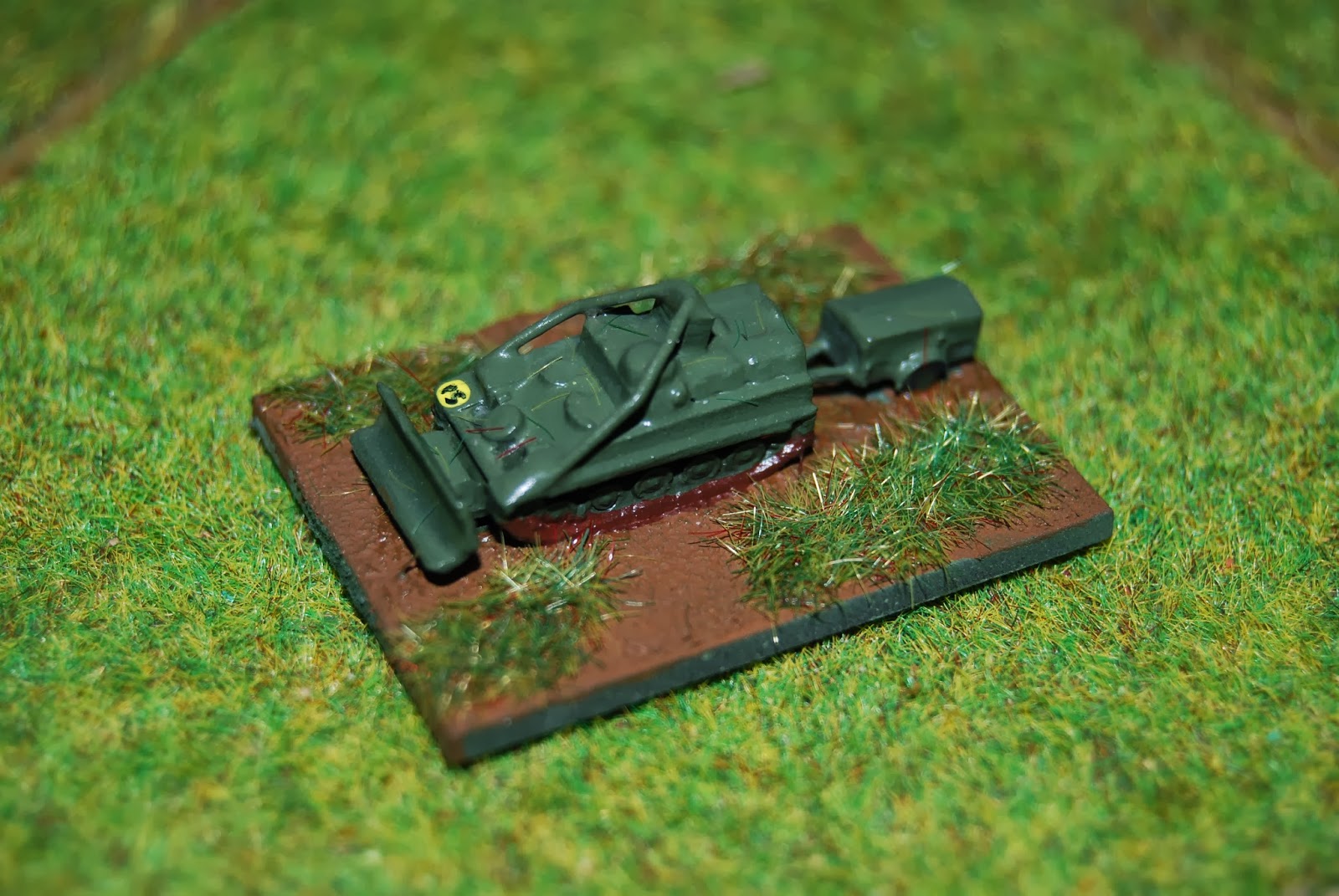 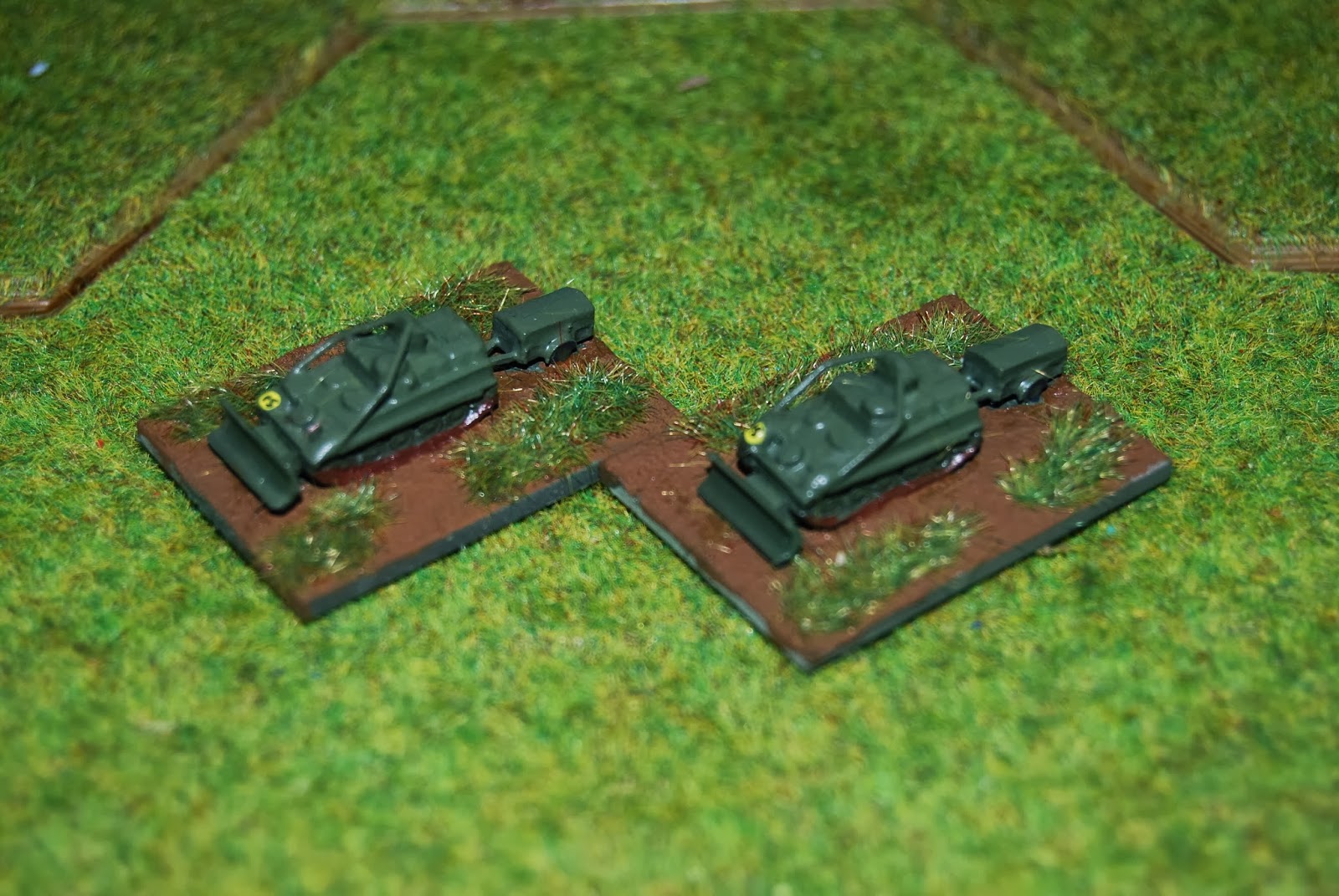 So, I converted 8 of these to provide me with two companies of armoured engineers for CWC.  Should do nicely for mine clearance duties.

Thanks for looking.
Posted by Andy Canham at 16:21 2 comments:

I've had a busy week this week with lots of different things on the painting table.  Here is the other Plastic Soldier Company pack that I have, the Pz IVs.  I've assembled these as Pz IV ausf G for mid-war and painted them in the tri-colour camouflage pattern as I wanted to try out my new air brush.  The base is Vallejo middlestone with NATO brown and reflective green cammo colours.  I'm quite pleased with the result and the cammo effect is just what I was looking for, 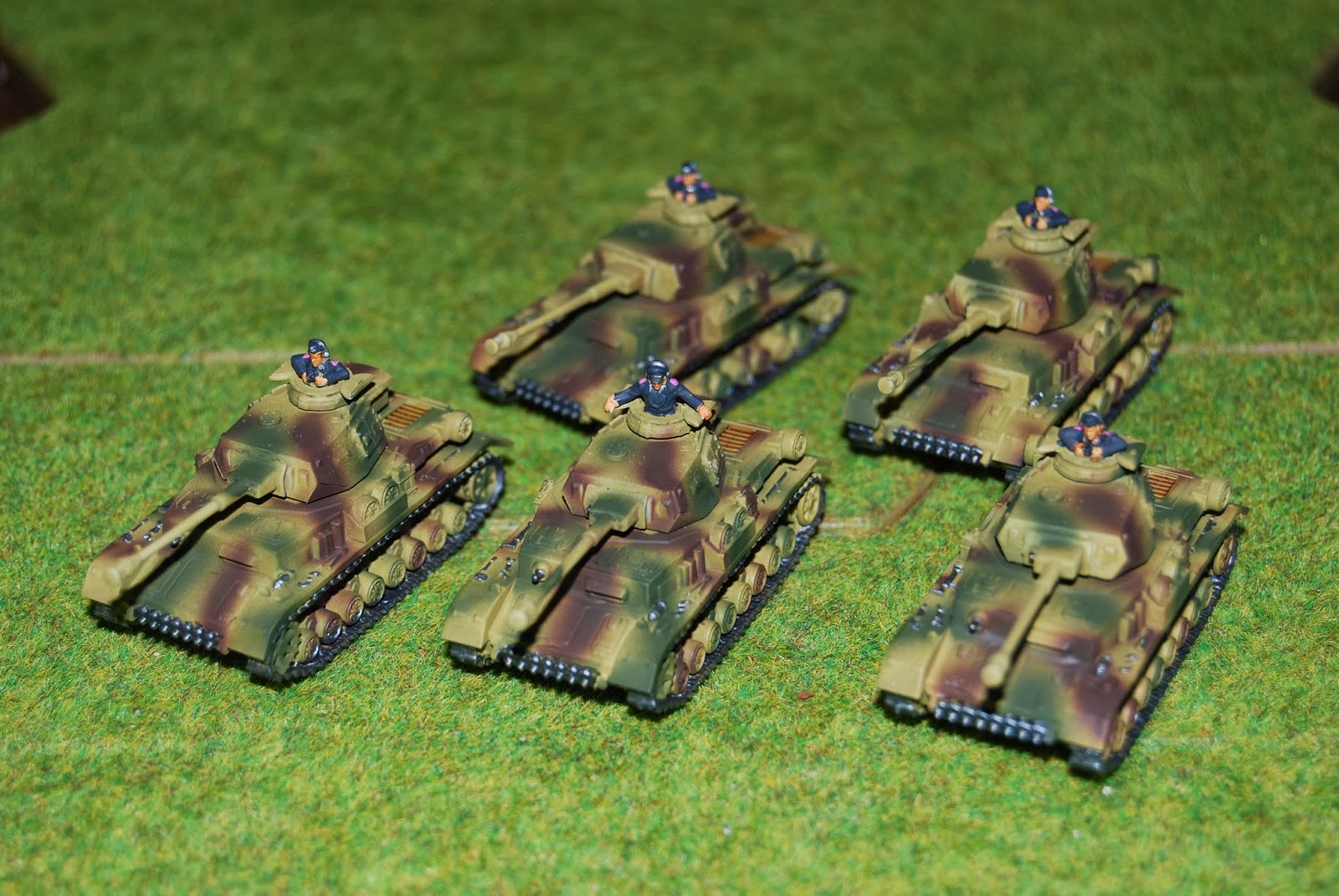 From the back - I picked out the grills on the back of the hull with an Army Painter soft tone ink wash. 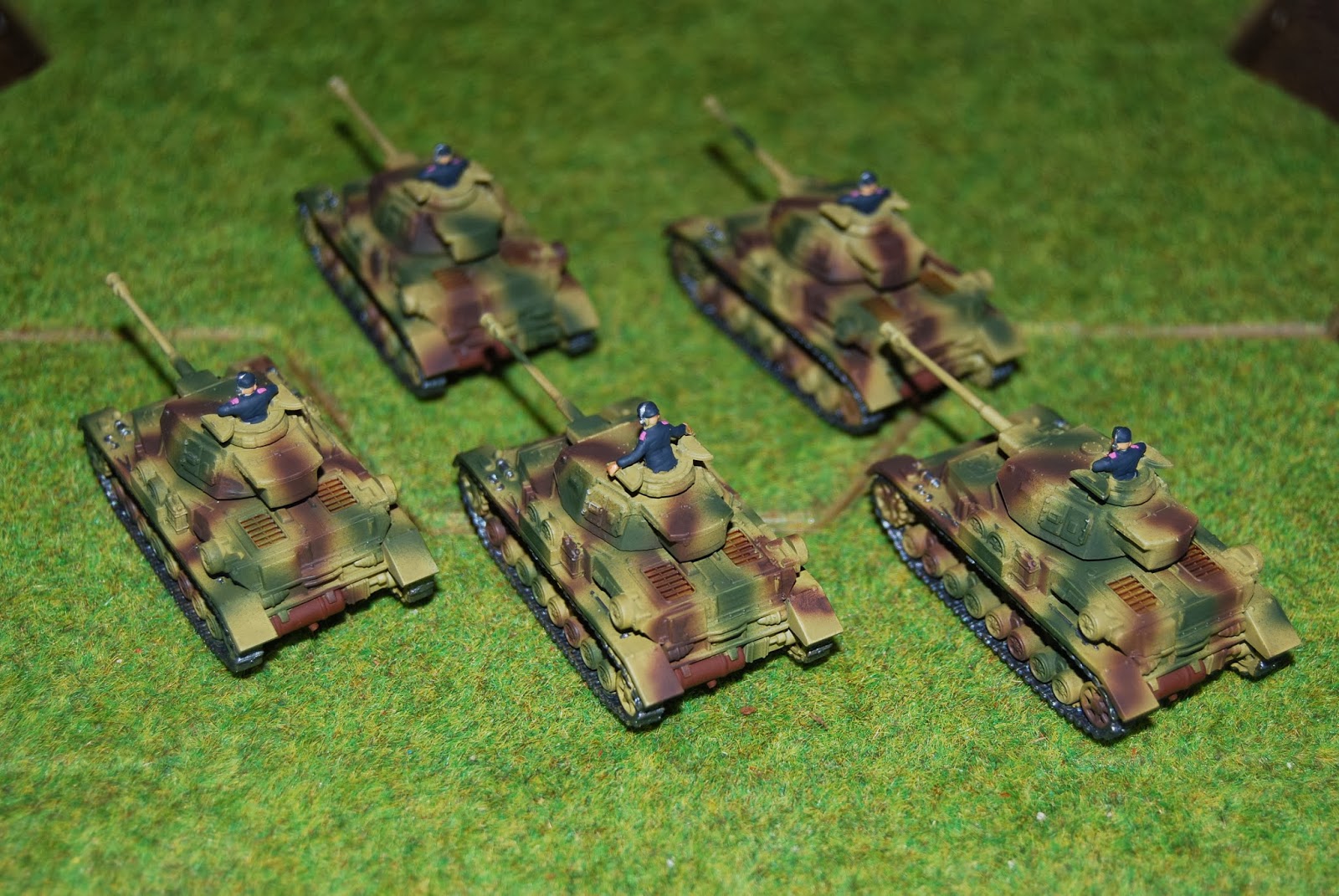 The command on one of the regular tanks in more detail. 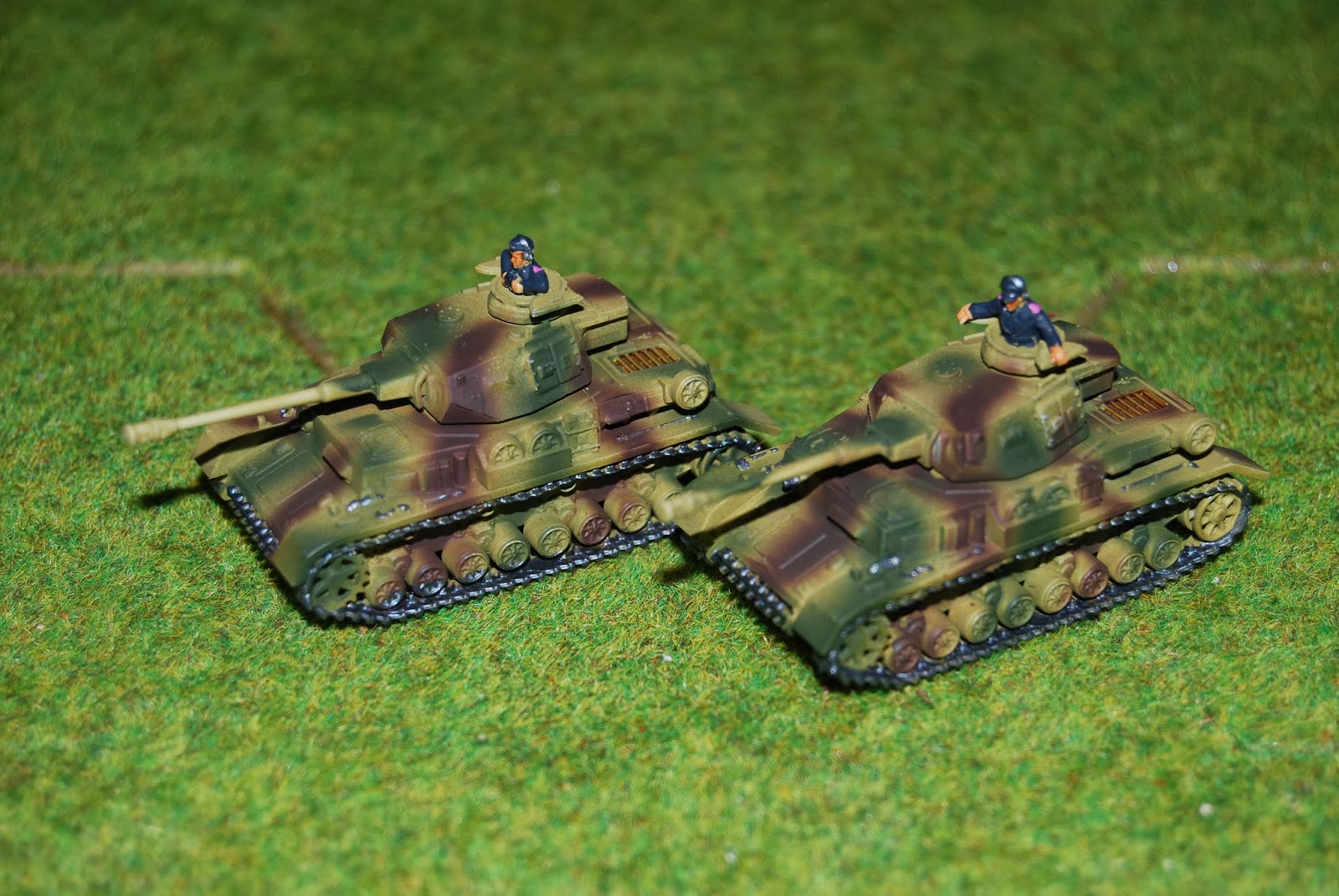 A comparison of the PzIV on the left with the PzIII in desert colours, both Plastic Soldier Company. 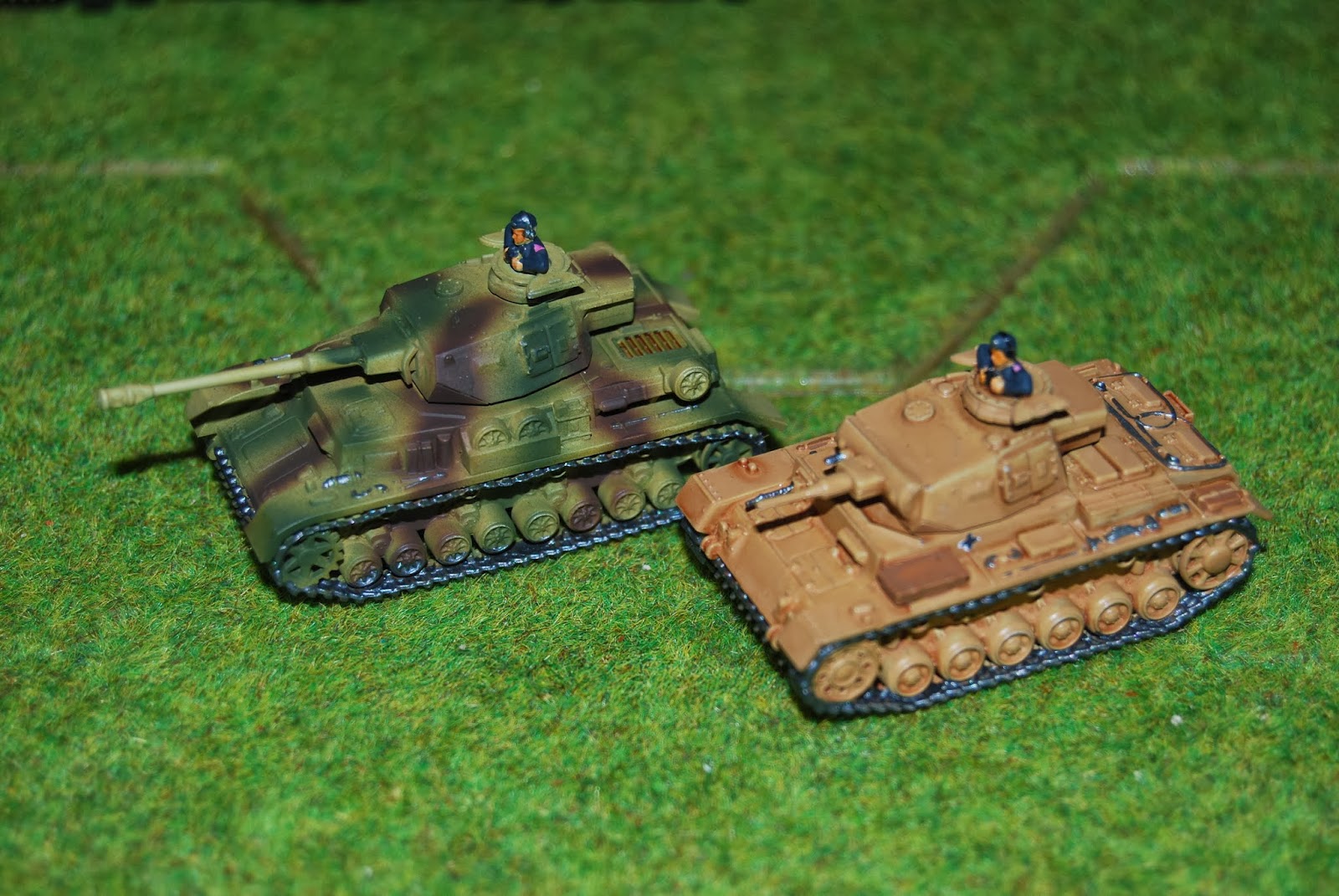 I've got various models in this scale in metal by Peterpig and Skytrex, both companies making very nice castings.  However, these are so much lighter and more convenient to carry to the club.  I've also quite a few Battlefront vehicles, which are again nice but these are as detailed and even less weight.  Needless to say they are a fraction of the price of the metal and Battlefront castings, being comparably priced to the Zvezda vehicles, which I've yet to try.

Thanks for looking.
Posted by Andy Canham at 13:42 No comments: