I hope Santa was kind to you all.  He certainly was generous to me, I have a Warlord Games English Civil War Battalia to paint, along with a Gripping Beast 6 pt Anglo-Danish Army, as well as a host of 6mm Heroics and Ros, including the makings of a WW1 British force, various WW2 odds and ends to finish off units and the makings of a 1980's modern French force.  He also bought me Max Hastings' "Catastrophe", which I will enjoy reading once my eyes are back to normal.

Unfortunately, I've had a recurrence of my eye problems and spent the early hours of Sunday 22nd in Casualty and the morning of Monday 23rd at the Eye Clinic, having my eye debrided .... again!  Fortunately, my sight began to come back on Christmas Eve and was significantly better for Christmas Day, so Santa gave me the best present ever.  The latest theory from the clinic is that I may have developed a sensitivity to cyanoacrylate glues (Superglue), which is a pity as I work with the stuff as well as use it for the hobby, so will now have to wear safety specs and use gloves when handling the stuff - probably sensible precautions anyway!

So, an entire holiday with no reading, driving or model-making/painting.  Telly just isn't as good as it was back in the 70's!  Still, it meant I had lots of time to help my lad with his new toys, although the Wii games were beyond me.

So, when I get back to painting, I'll be wrapping up the 6mm Soviet Motor Rifle Regiment.  Then it will be on to the Andreivian Turk irregular forces (some Under Fire Miniatures Chechens and plastic Mujahideen) ready for the Crisis Point game in April.  I'll also be fitting in some 6mm 1980's French for the game at Broughton in September.  In between times, the Saga warband and Warlord Battalia will be slotted in as and when.

So, hope you all had a great holiday season and look forward to catching up in the New Year.

All the best and thanks for looking.

I haven't done a lot in the last month or more, due to continued eye trouble.  It now seems I have dry eye syndrome, which means drops and eye ointment indefinitely.  He-hoh!

Anyway, following my success on e-bay a few months back, I thought it was time to get back to some Cold War Commander Soviets.  I'm putting together  the 39th Guards Motor Rifle Division, for operations in the Fulda Gap area of southern Germany in 1985.

On the table at the back are three BTR-60 battalions, each of 11 BTR-60PKs, three companies of three carrying infantry and one company of two carrying support weapons SA-7s, AT-5 Spandrel teams and SPG-9 teams, with two Gaz 66s with 120mm mortars. 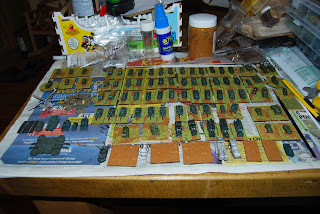 This is a dismounted infantry battalion, rebased as the original e-bay purchase was based for Challenger. 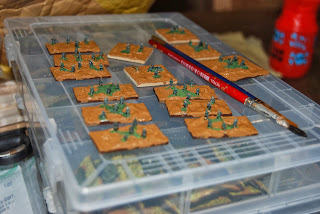 This was my attempt at converting a BTR-60PK into a BTR-TACP FAC vehicle, following Steve Grahams method as laid out in his blog.
http://littleleadarmsrace.blogspot.co.uk/2013/01/btr60-tacp-wip.html
Seemed to be a relatively straightforward conversion.  I cut the barrel off with a craft knife.  Cut some card (from an old business card) to shape, bent it to form the platform at the back and super-glued it in place, allowing the glue to soak into the card to stiffen it once set.  Then trimmed some plastic spar to size for the generator and glued that onto the card platform.  I also stuck a small card rectangle over the turret front to simulate a vision port in the turret front.  A quick paint job and "hey presto!" 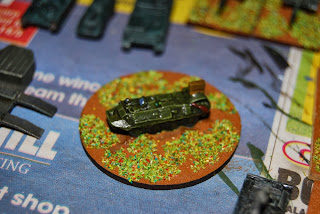 So, one more infantry battalion to rebase and some engineering assets to finish off and the regiment is ready for the table.

Thanks for looking.
Posted by Andy Canham at 22:47 3 comments: