A couple of Late War German artillery pieces the 7.7cm Feldkanone 1916 (FK16) by HAT.  This pair was a gift from Will at the club - thanks Will! 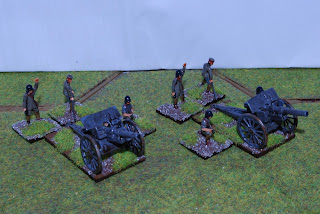 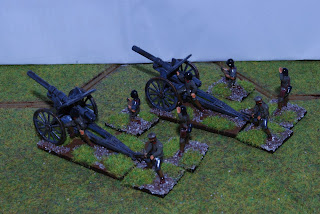 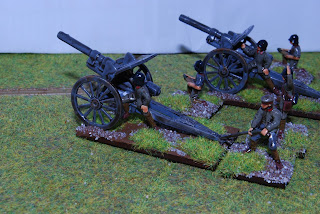 Thanks for looking.
Posted by Andy Canham at 09:46 No comments:

These are a pair of HAT WW1 37mm armed Renault FT-17 tanks.  There were two models in the pack, produced in a hard black plastic, which went together really smoothly.  The hull was supplied in two parts needing to be glued along a longitudinal seam.  Individual track assemblies were glued to the sides and the turret was in three parts, the turret, a barrel and the little raised cupola (or whatever it is) on top.  The turret fits snugly on a peg into a hole in the top of the hull, so can be fully rotated. 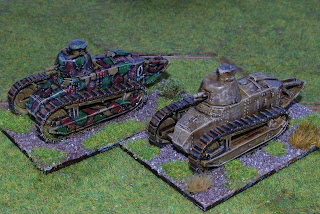 I painted these guys with a base coat of Middlestone.  For one vehicle, I stopped at a single colour finish.  For the other, I added spots of German Camo bright green and Mahogany with a little red, outlined in black grey.  Both vehicles were washed in Agrax Earthshade.  Tracks are oily steel, washed with Nuln Oil and dry brushed orange brown (used on the exhaust as well).  Both vehicles had a very light dry brush of Iraqi Sand to add a dustiness and pick out some of the raised edges and rivet details. 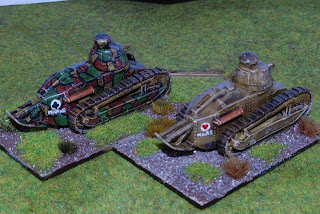 The plain coloured vehicle I named Mars and added a unit ID mark of a white circle with red playing card heart symbol. 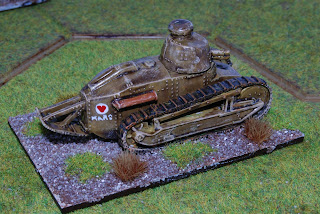 The multi-coloured vehicle has a club symbol and the vehicle is named Marne. 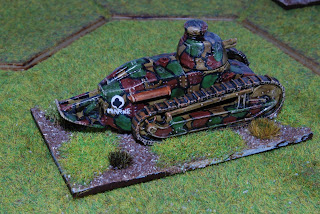 Both vehicles from the front. 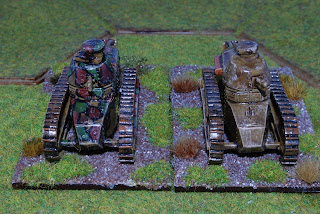 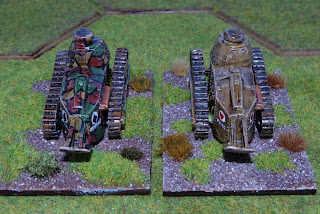 Nice little vehicles that look the part, ready to support my late WW1 French infantry and they will no doubt be available for intervention forces in the RCW and Andreivia.

Thanks for looking.
Posted by Andy Canham at 20:12 6 comments:

The first of my Christmas presents, a set of HAT colonial highlanders.  I've painted these up in khaki to represent the later colonial period and I'll also press them into service in my allied intervention forces for the Russian Civil War and Andreivia.  They will make up three units of infantry for TMWWBK (The men who would be kings) or a platoon of infantry for Arc of Fire in Andreivia, provided I add some highlander Lewis gun teams. 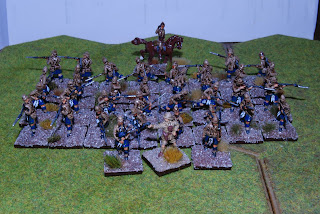 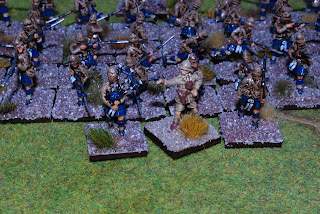 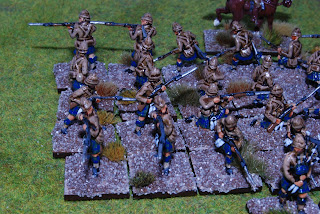 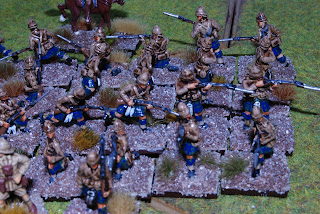 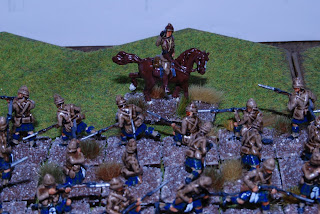 The piper and marching figure in more detail. 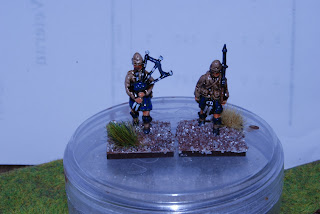 Some riflemen figures in more detail. 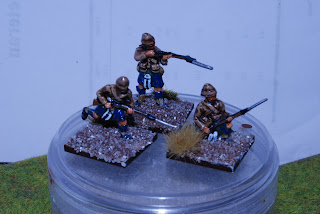 I painted these guys as The Black Watch (Royal Highlanders) with a tartan pattern painted as a chequer board of green and blue, with a khaki jacket suitable for the end of Victoria's reign through to WW1.  I hope to get these on the table in a game of TMWWBK next week.

Thanks for looking.
Posted by Andy Canham at 23:06 4 comments:

I had some spare HAT WW1 German artillery figures, which are suitable to represent command figures.  On the left, an artillery commander in pickelhaube.  In the centre, a figure standing casually in greatcoat with hands in pockets - he could be a ranker trying to cadge a cigarette, but he has the air of a more aristocratic nonchalance.  On the right is a figure with hand raised wearing a Stahlheim, which I've painted in a camouflage pattern. 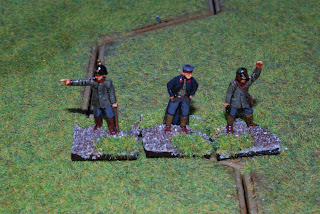 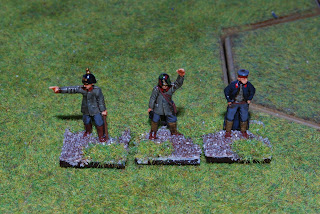 I also dug out a couple of surviving 70's era Airfix WW1 Germans from my childhood stash and painted them up. I particularly like these two figure poses, especially the guy with binoculars. 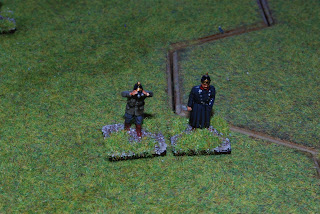 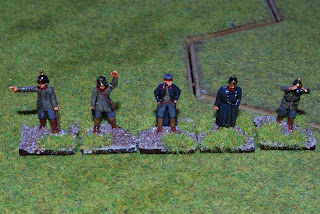 Colonial highlanders should be next up for photography.

As ever, thanks for looking.
Posted by Andy Canham at 19:59 No comments:

For a bit of fun, I dug out what is left of my old FFL figures from my old toys from the 70's.  I picked out a few of the figures and gave them a make over.  Looking at the photos, I realise I've not detailed the brims of their kepis in black and I need to add some collar and cuff markings in red, plus the NCO's stripes.  I've also just block painted them, but think I prefer to wash with Agrax Earthshade or similar, so will probably revisit these later. 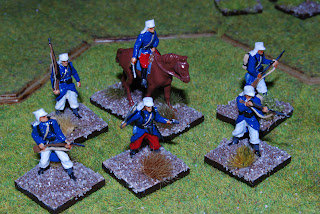 I used Prussian blue for the coats, flat white for trousers and kepi covers, black for webbing/pouches/shoes and gaiters (the latter dry brushed basalt grey) and flat red for officer's and NCO's trousers.  Packs are black with Iraqi sand bedrolls. 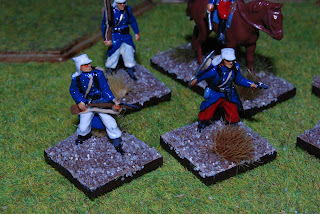 I have a box of the early WW1 French by HAT and these also serve as a test of colours suitable for them as well. 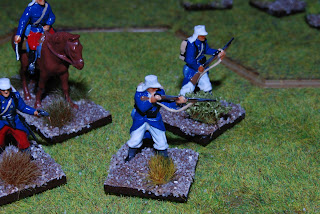 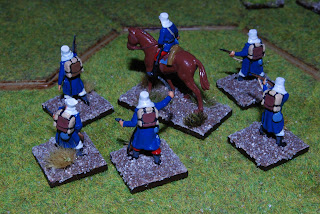 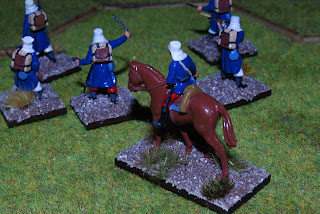 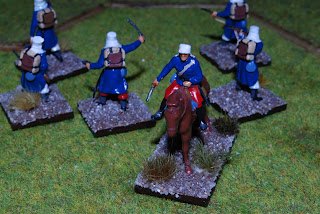 Fixed the black brims on the kepis in the pics below.  Feeling happier now! 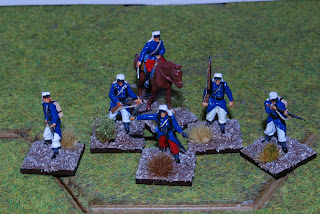 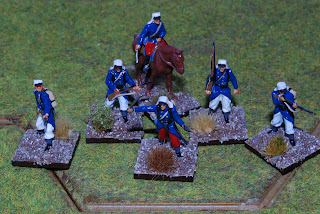 Despite the shortcomings of the original figures discussed on the Plastic Soldier Review website, I like these figures, if for nothing more than the happy memories of playing with them as a child.  I also have the Fort Sahara building, in a fairly sorry state, but think I will try and do it up as it looked fantastic.  It might even make it as an Ottoman fortress for use in Andreivia.

Thanks for looking.
Posted by Andy Canham at 09:02 5 comments: