Wargames Emporium had their stock of models resupplied from CinC in the States and shipped out my Sagaie models, so here is the finished unit, the 1e Regt Hussars Parachutistes, three companies of three Sagaie platoons plus a HQ.  These seem to be allocated to larger formations by company, presumably to provide a bit of extra recce weight.

A couple of shots of the whole regiment. 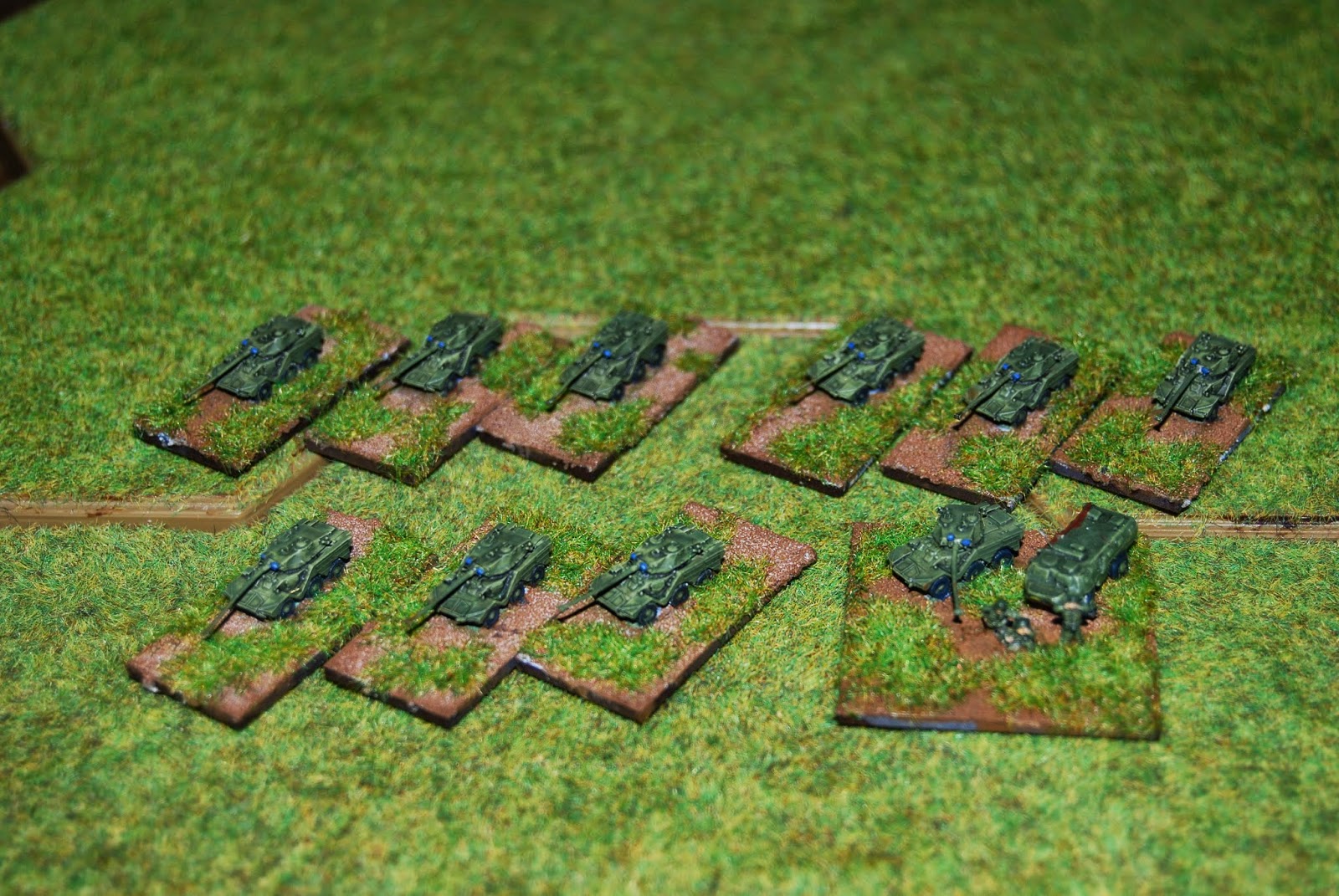 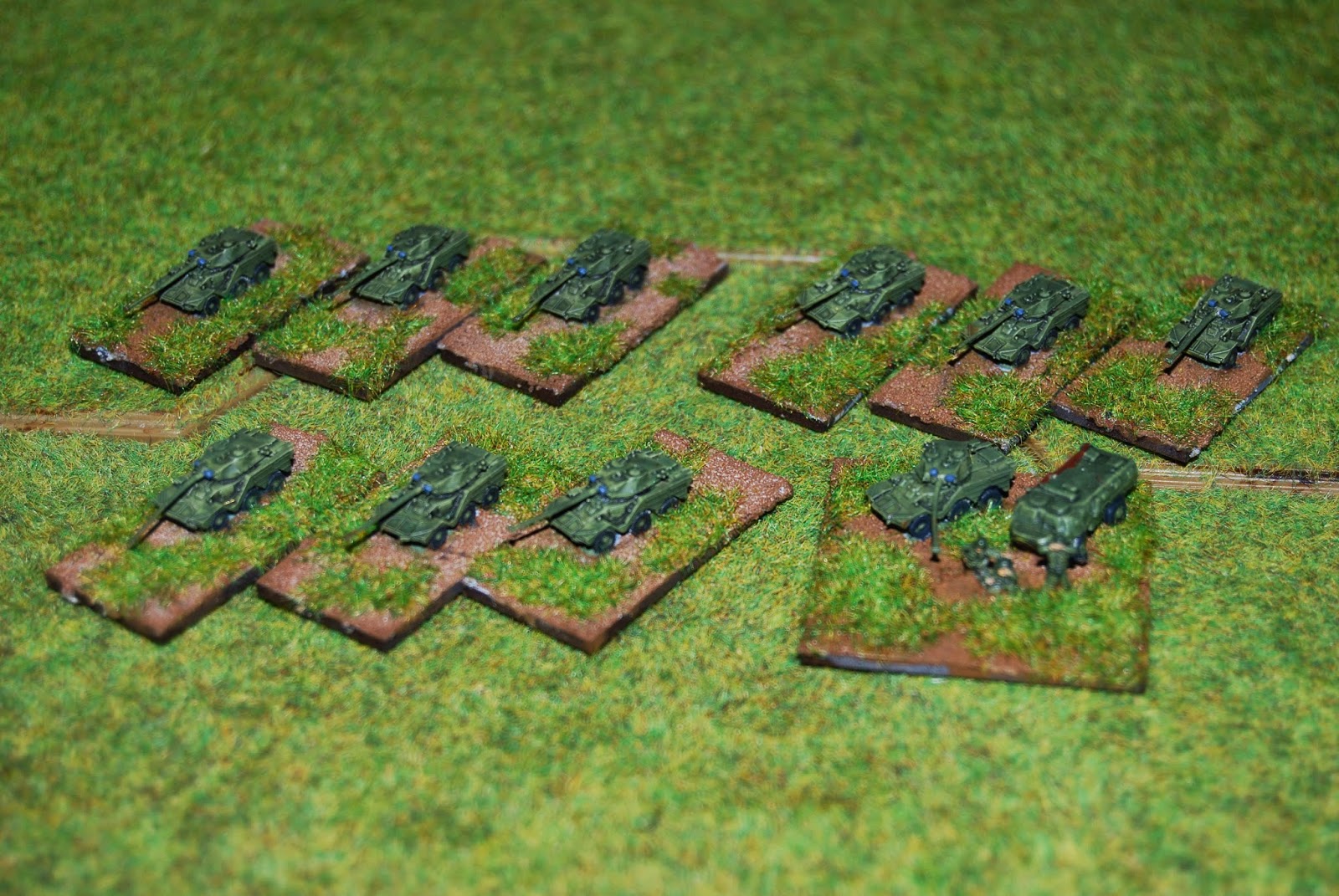 One of the Sagaies in more detail.  These are really detailed models, although the barrel is a bit bendy, but fortunately doesn't seem too brittle. 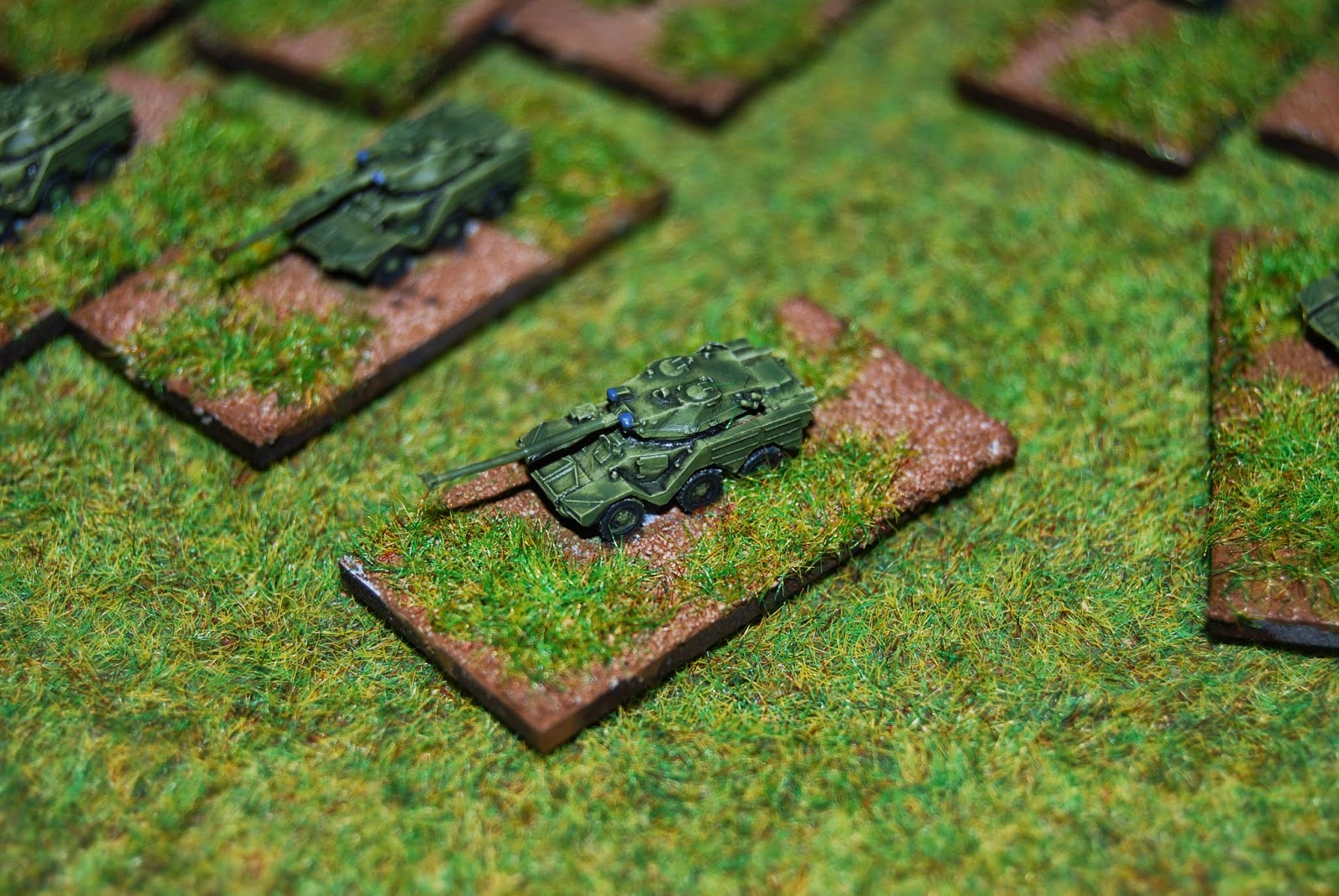 The HQ stand, with a CinC Sagaie, I think a H&R VAB (courtesy of Ian Shaw - thanks Ian) and a command team from the Vietnam range by Irregular. 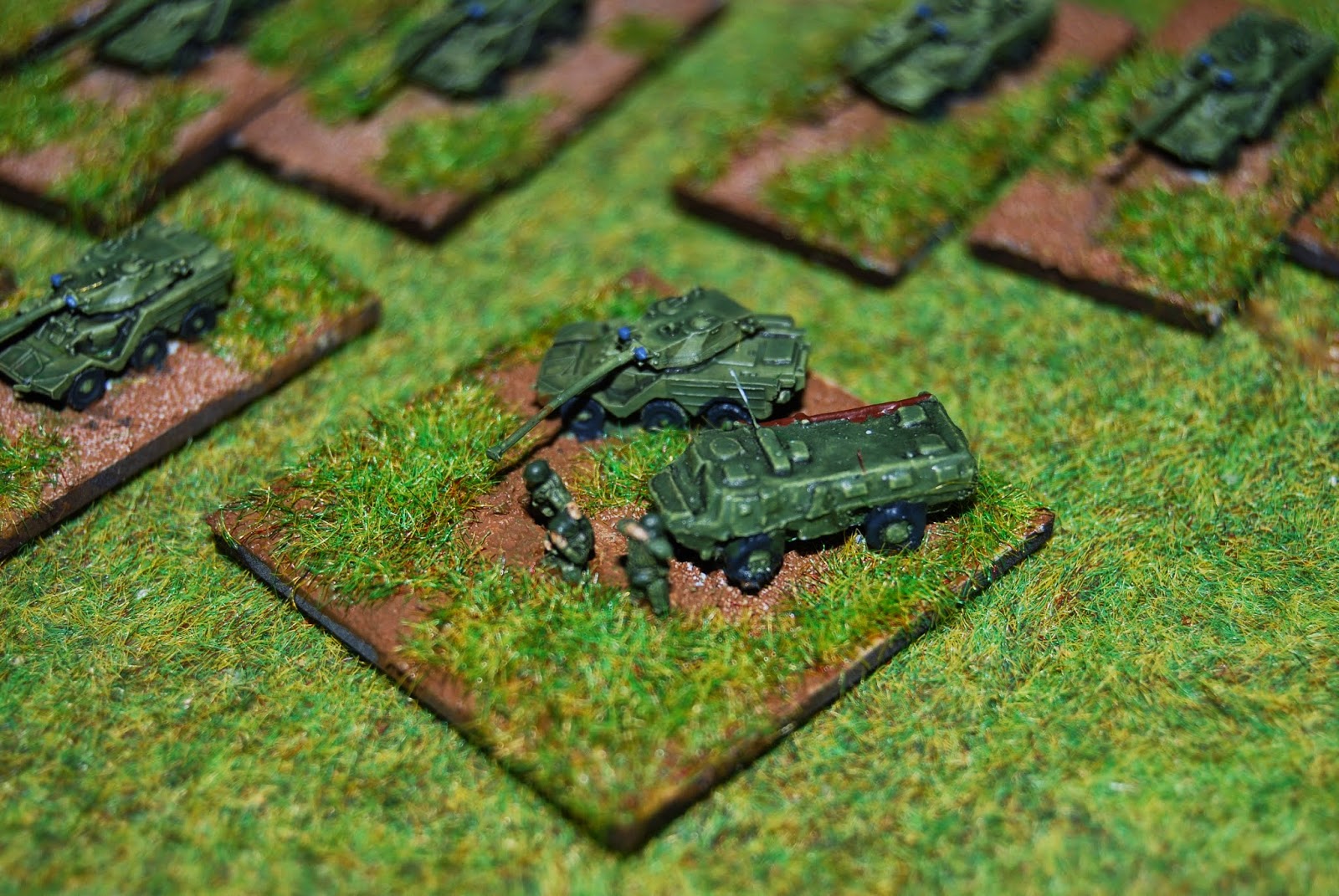 I've got some infantry on order from Mainforce to wrap up the legionnaires in VABs and some odds and ends from Scotia to complete a couple of HQ stands and that should be the French wrapped up ready for the megagame in September.

Now on the workbench is a whole bunch of 1980's British and Soviet armour.  I had a couple of armies for 1991 Gulf War, but was never happy with the paint job and it was never fun playing the Iraqis, so I've soaked them in Dettol and stripped them.  Unfortunately, the Howard Hues paints I used seem to have reacted oddly with the Dettol and turned into sticky goo which needed some scrubbing to get rid off.  Anyway, apart from the residual smell of Dettol, they are as good as I'm going to get and will be next on the workbench, although a Gripping Beast Saga army has been waiting patiently since Christmas, so it may be time to get them done as well.

Thanks for looking.
Posted by Andy Canham at 09:15 6 comments:

Not a lot happening on the painting table at the moment.  I've been putting together various Plastic Soldier Company kits that I picked up at various shows, so they will need painting up shortly.  I've been putting together the makings of a British infantry company for FoW games at the club, based mainly on various Skytrex packs that I bought probably 20 years ago or so, with some Peterpig and Battlefront figures, mainly specialist troops and crews respectively.

1st platoon, 6 stands of infantry, one each command, PIAT and 2" mortar stand. 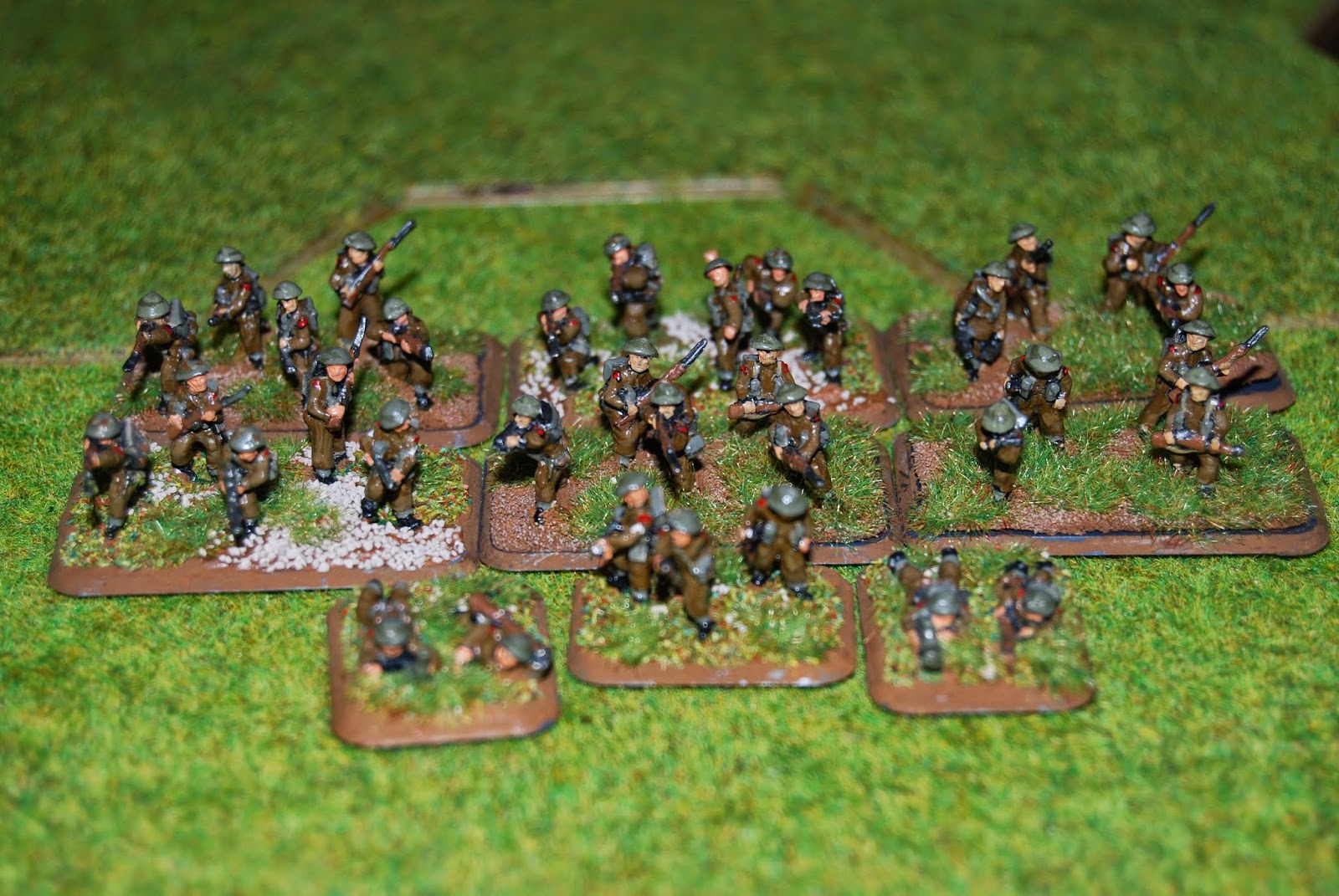 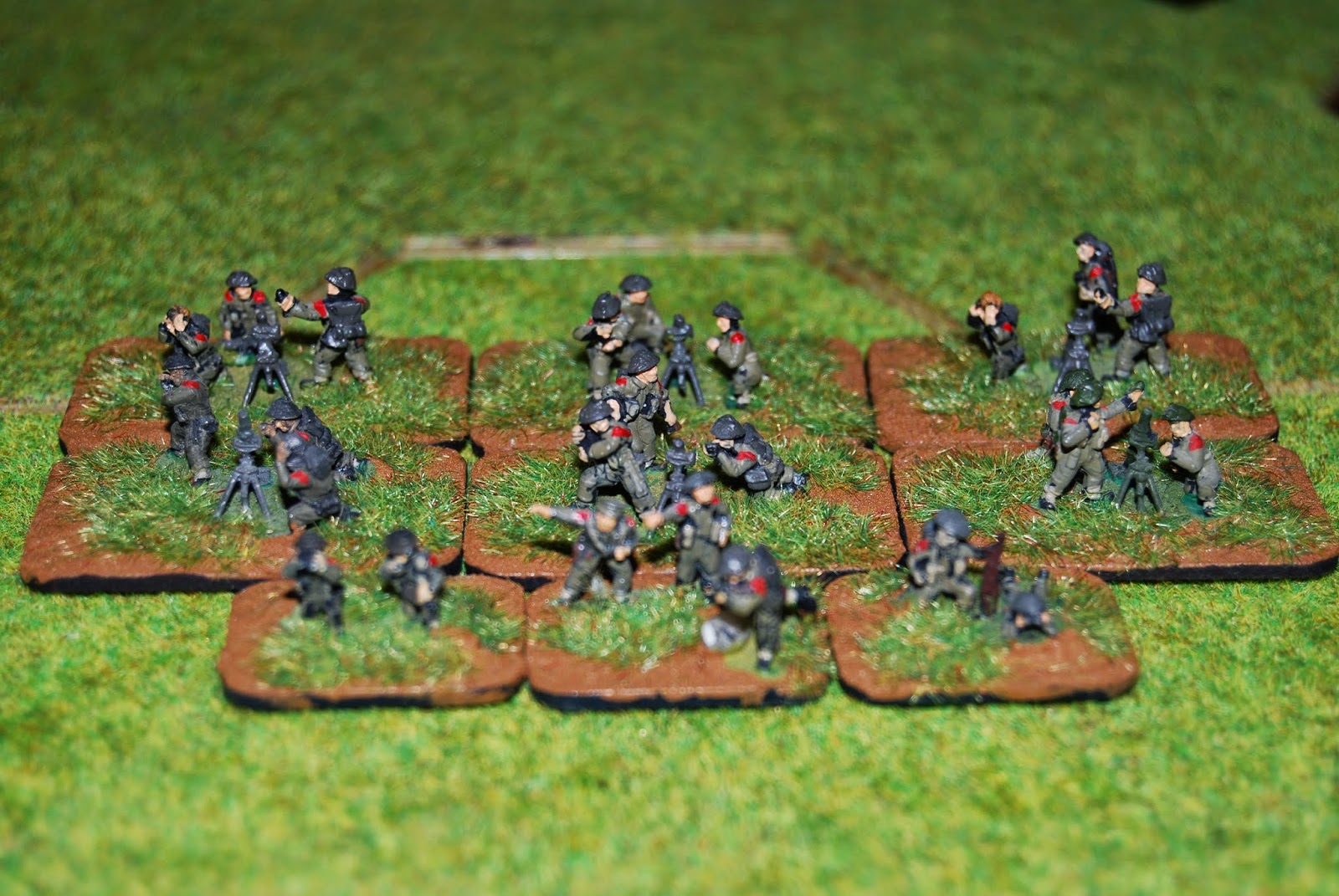 Some very old Battlefront 6pdrs with command and PIAT team. 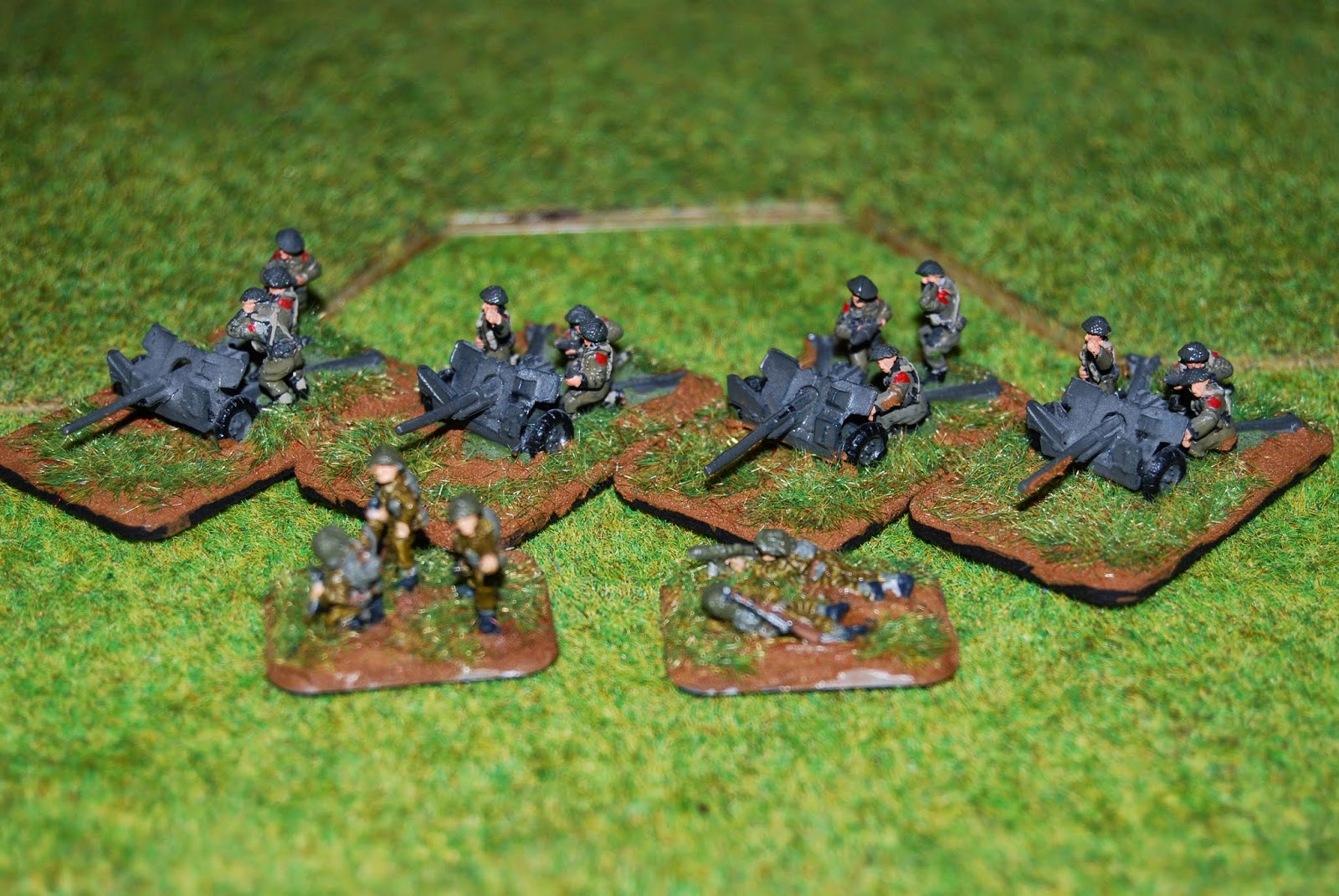 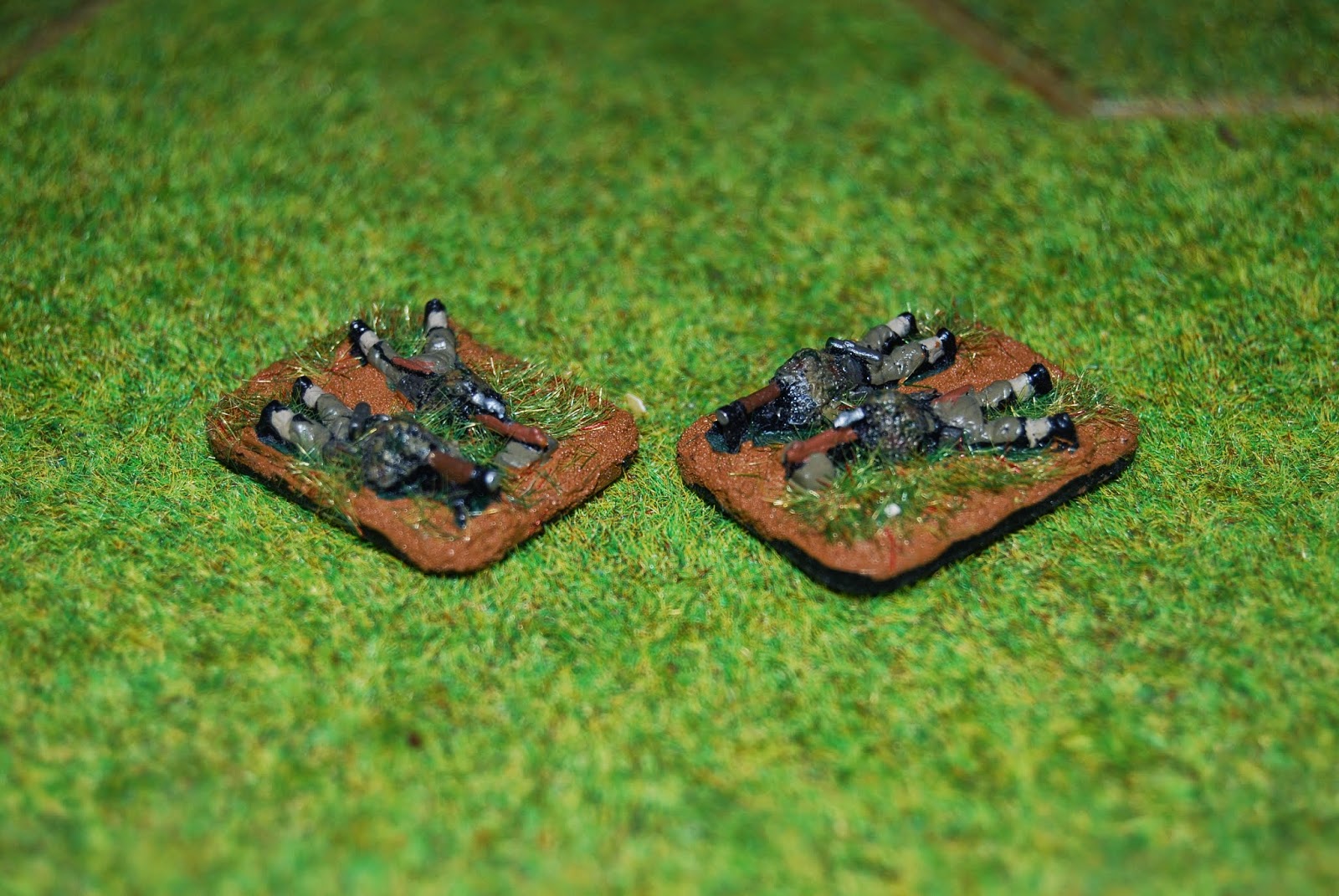 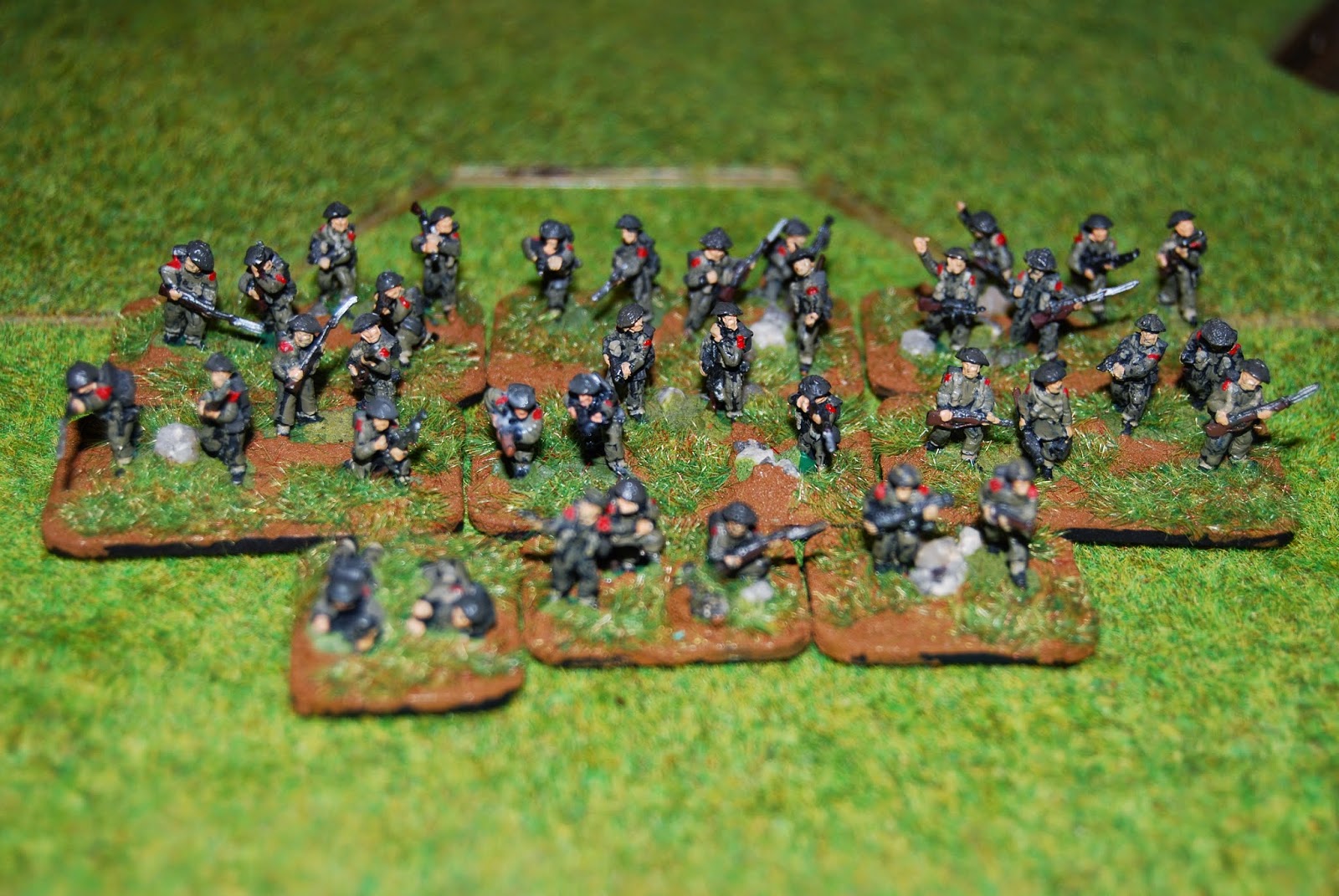 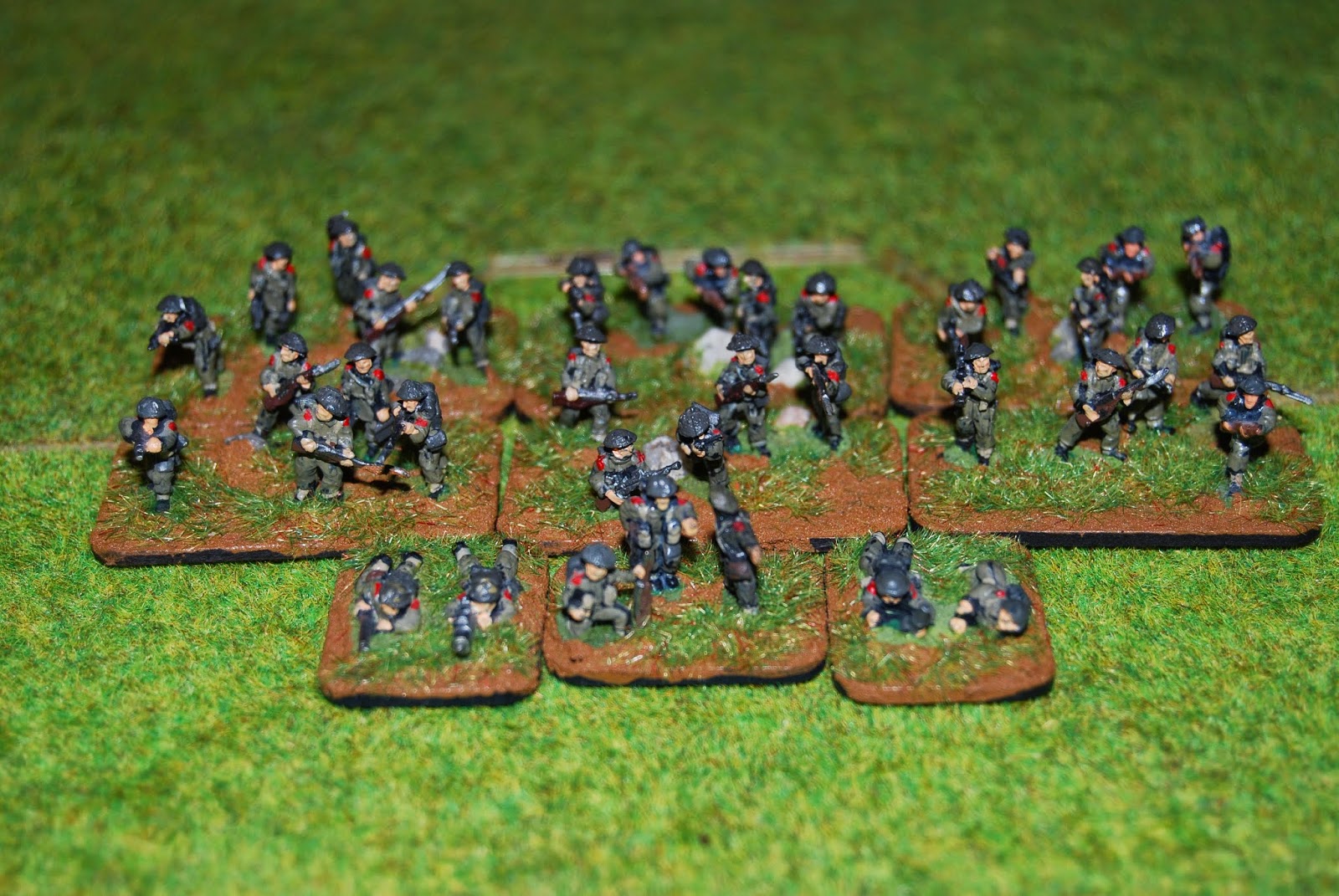 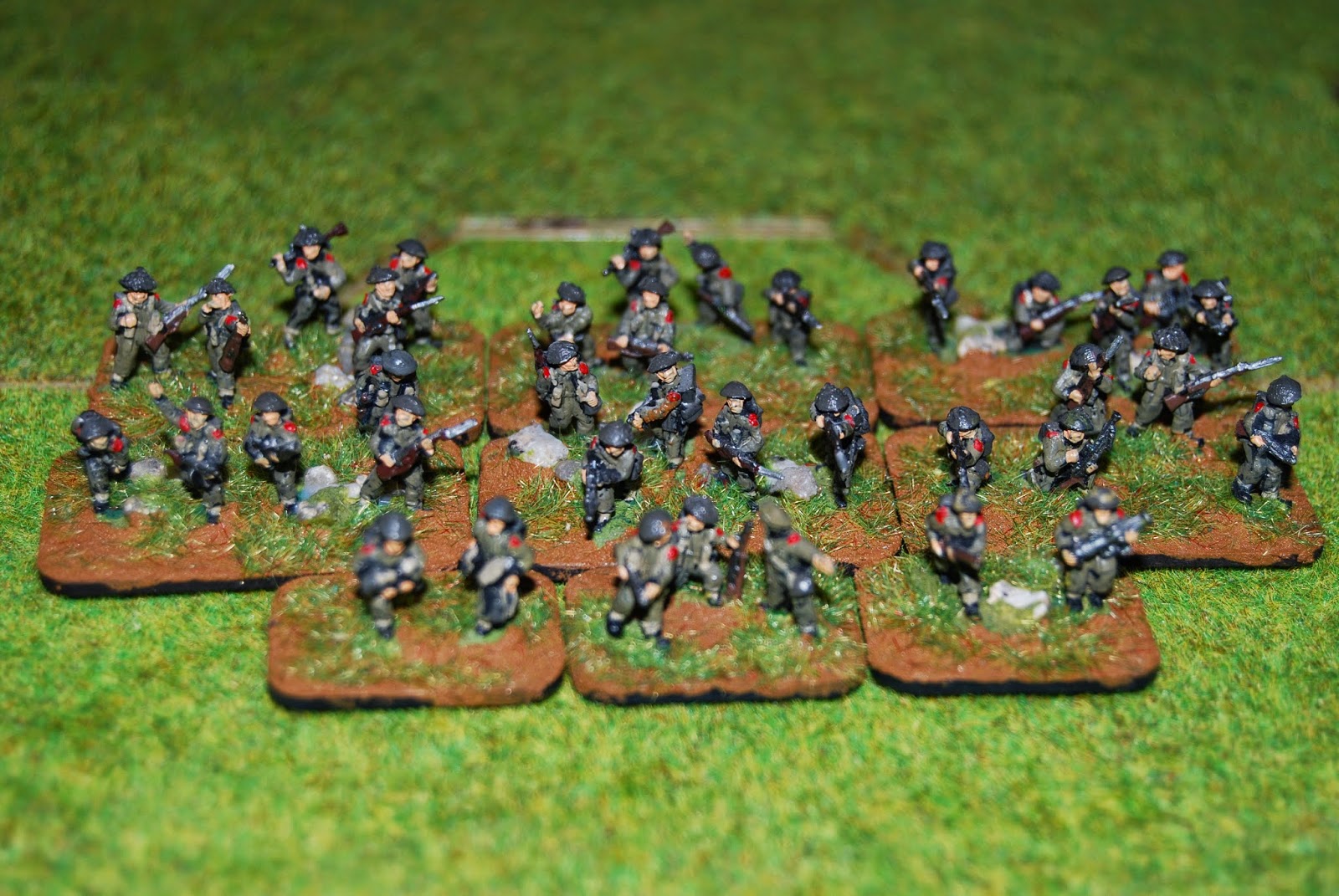 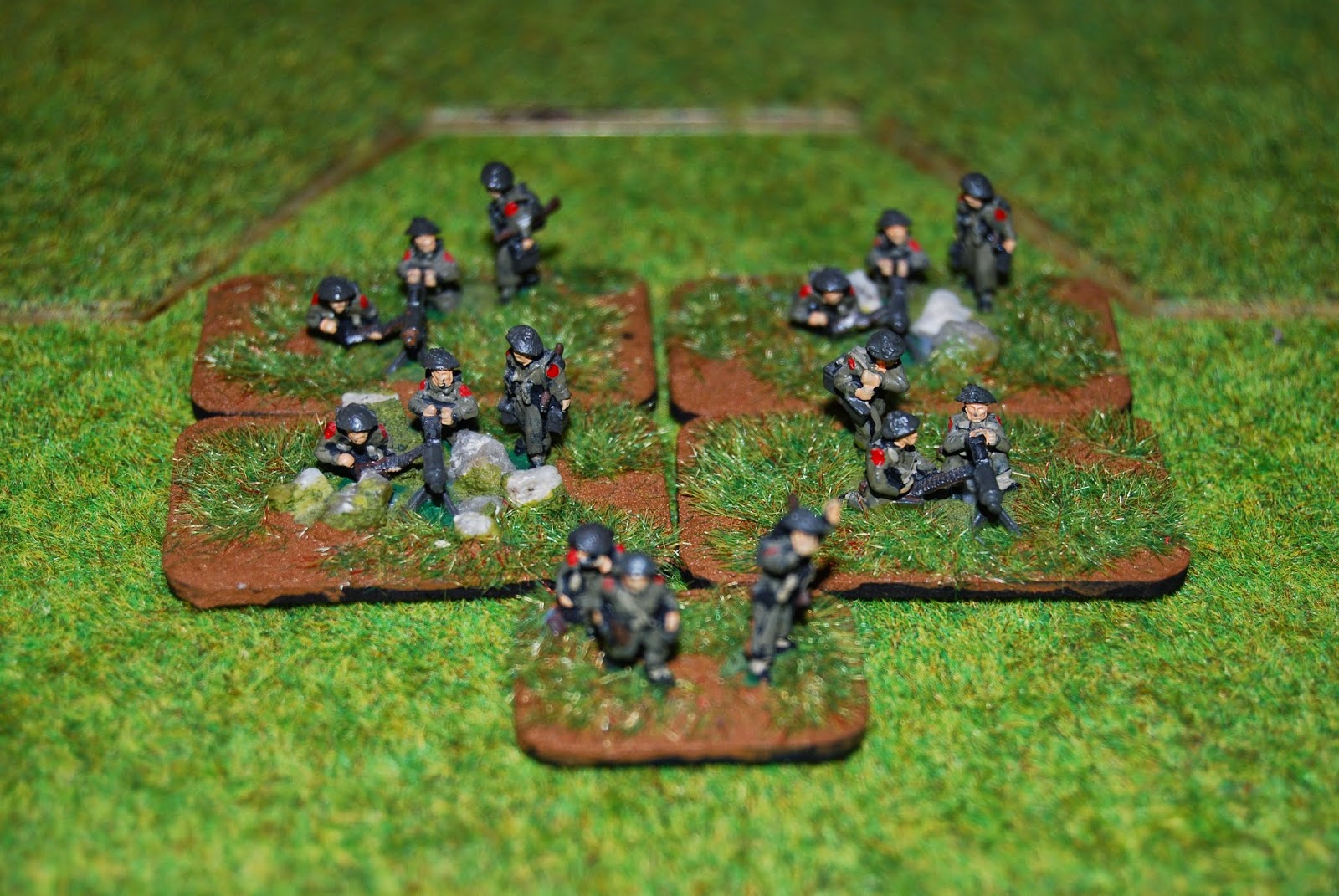 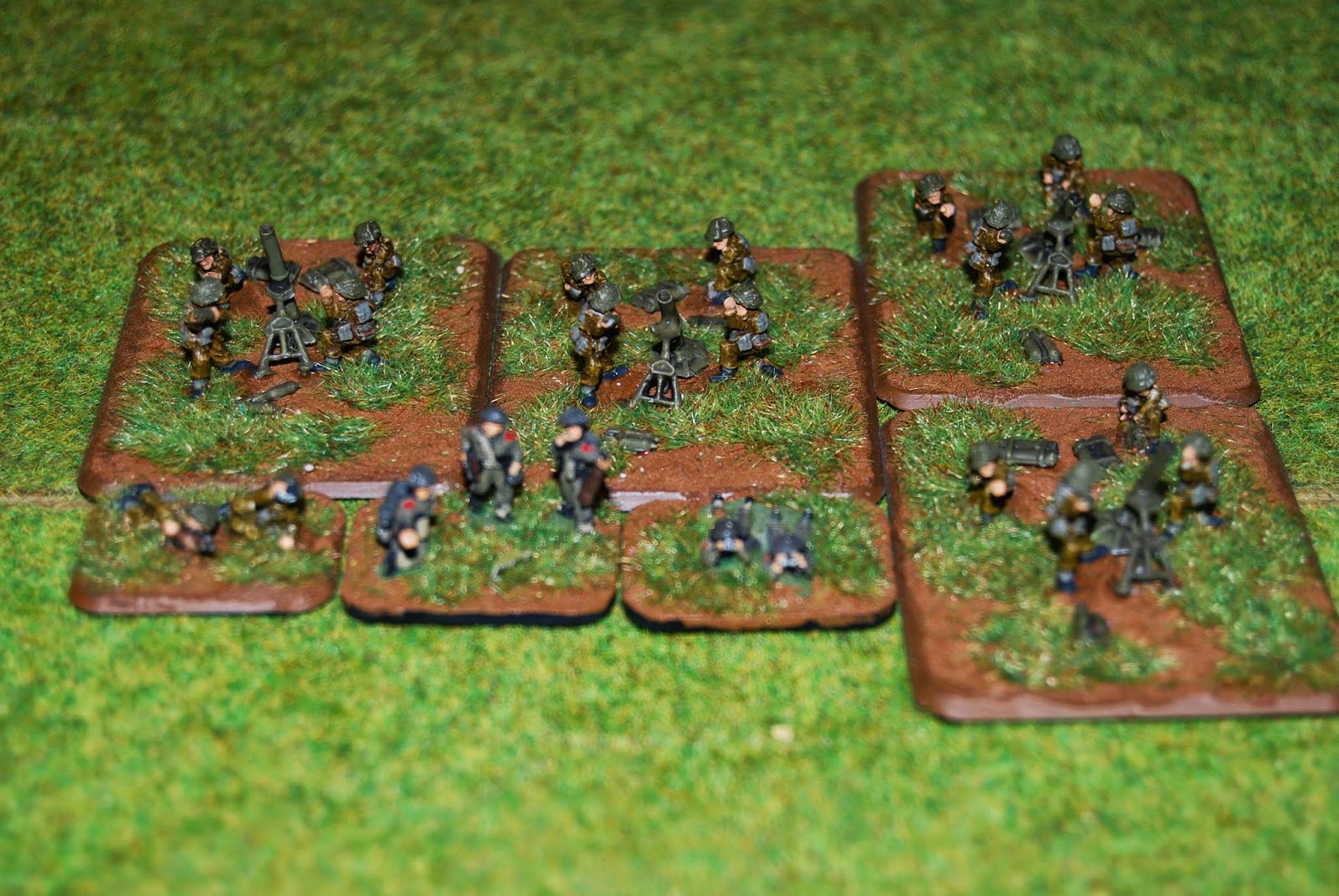 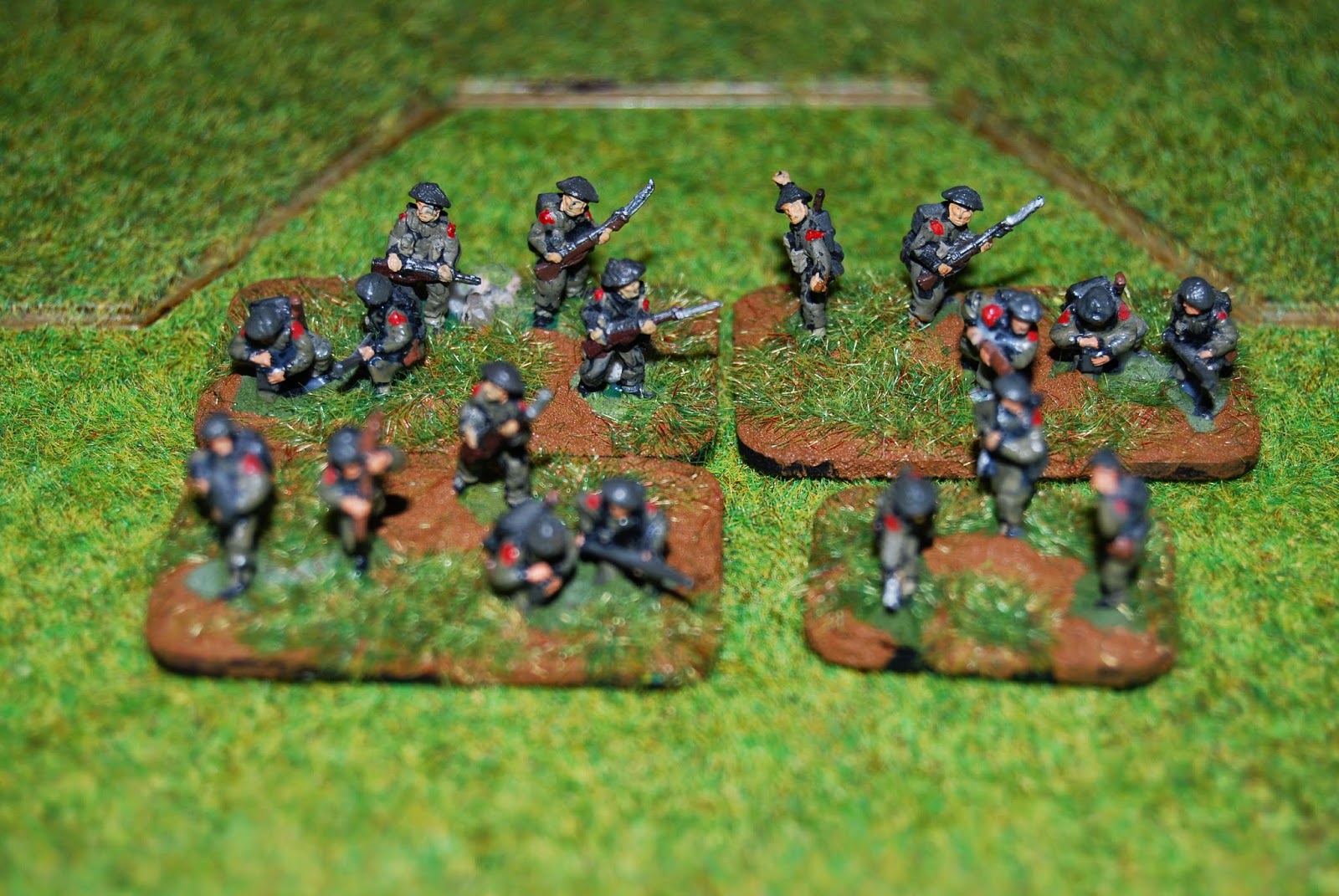 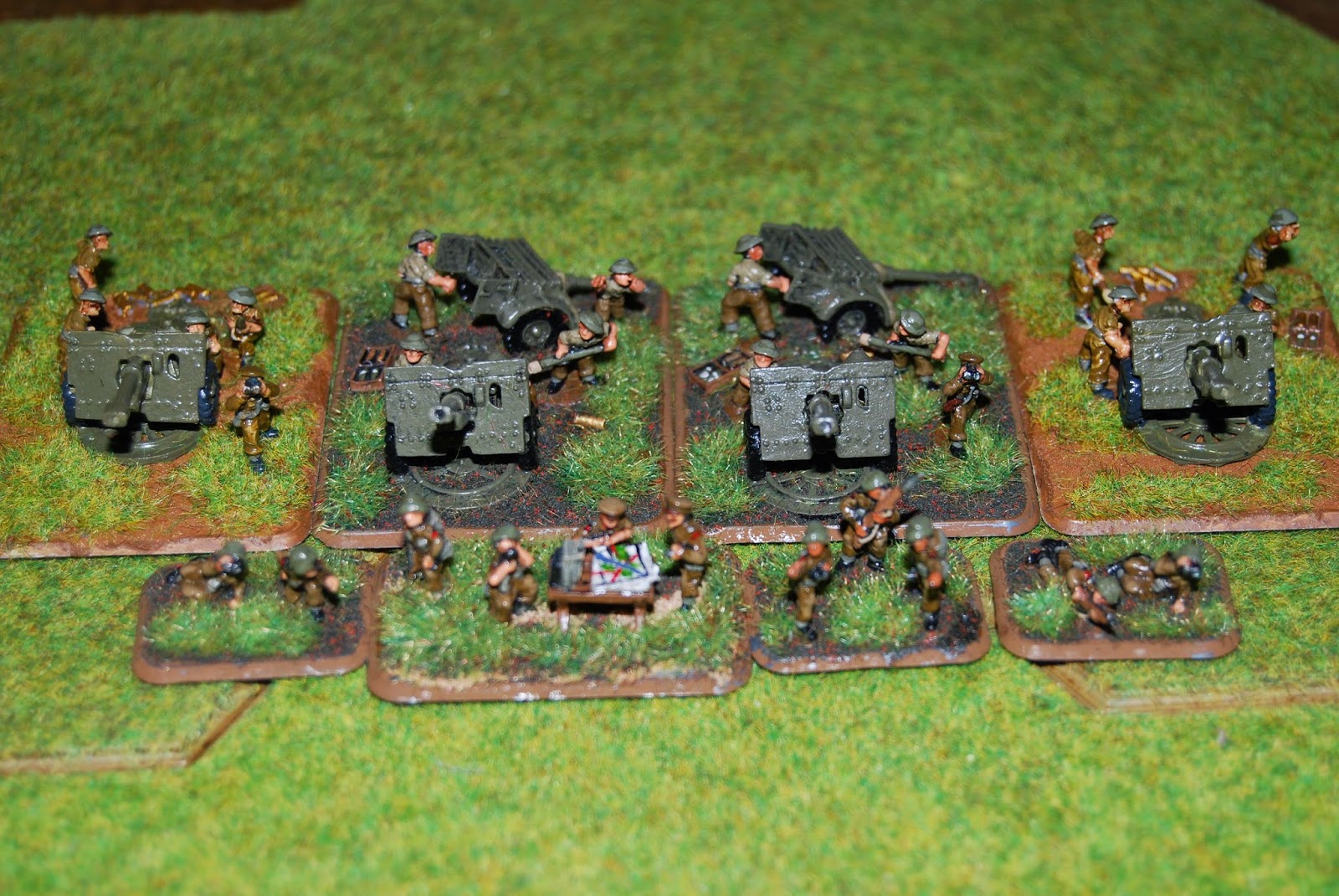 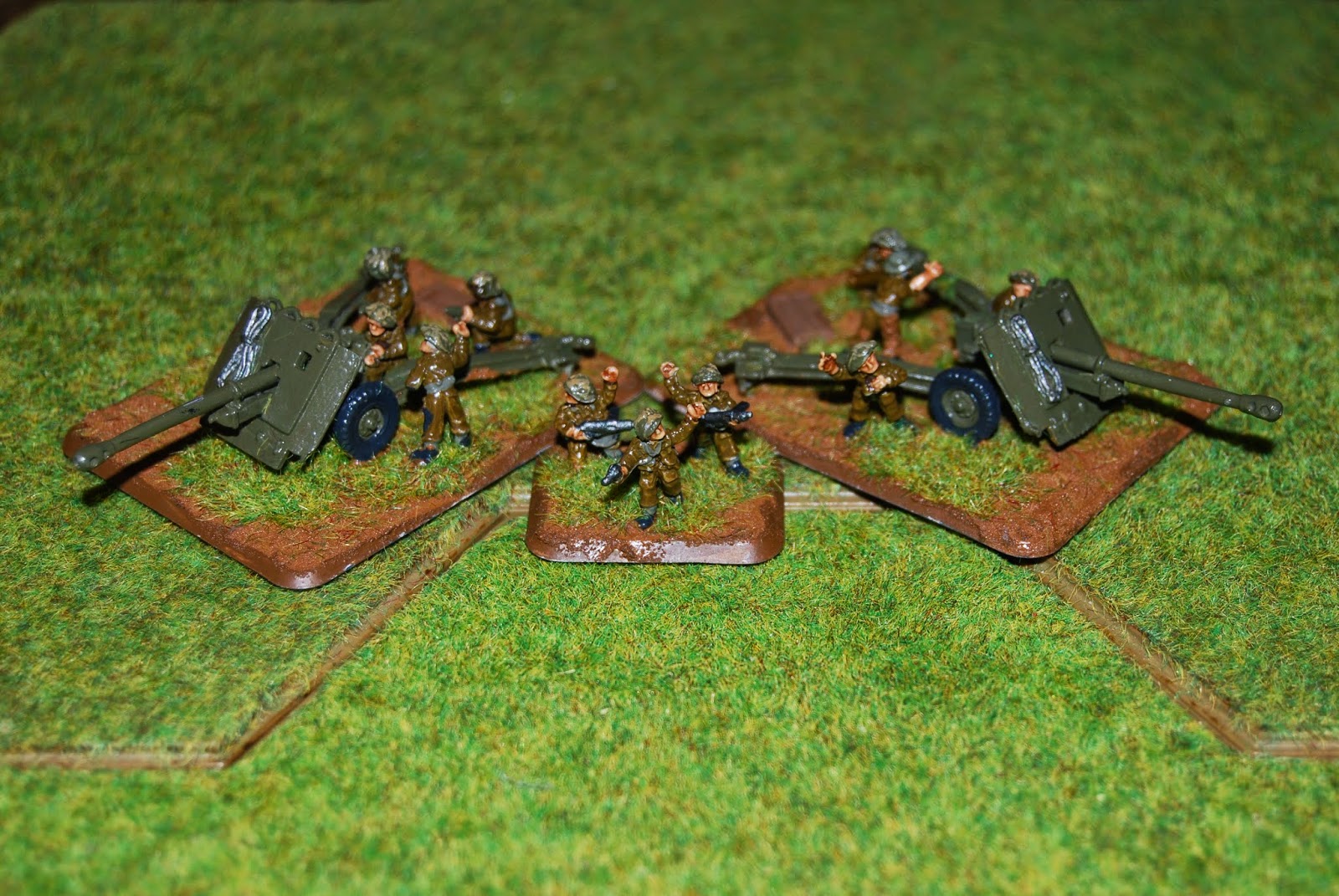 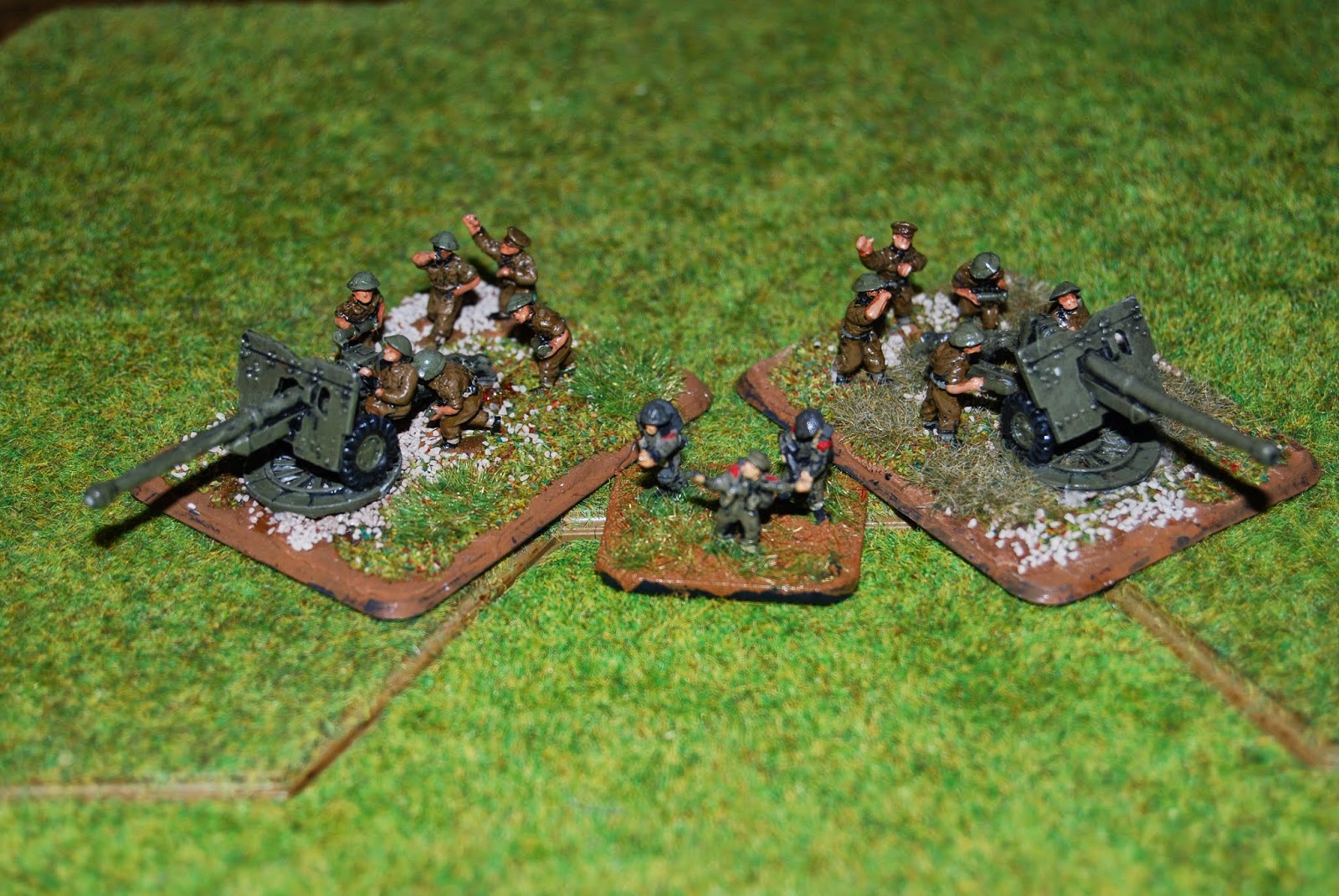 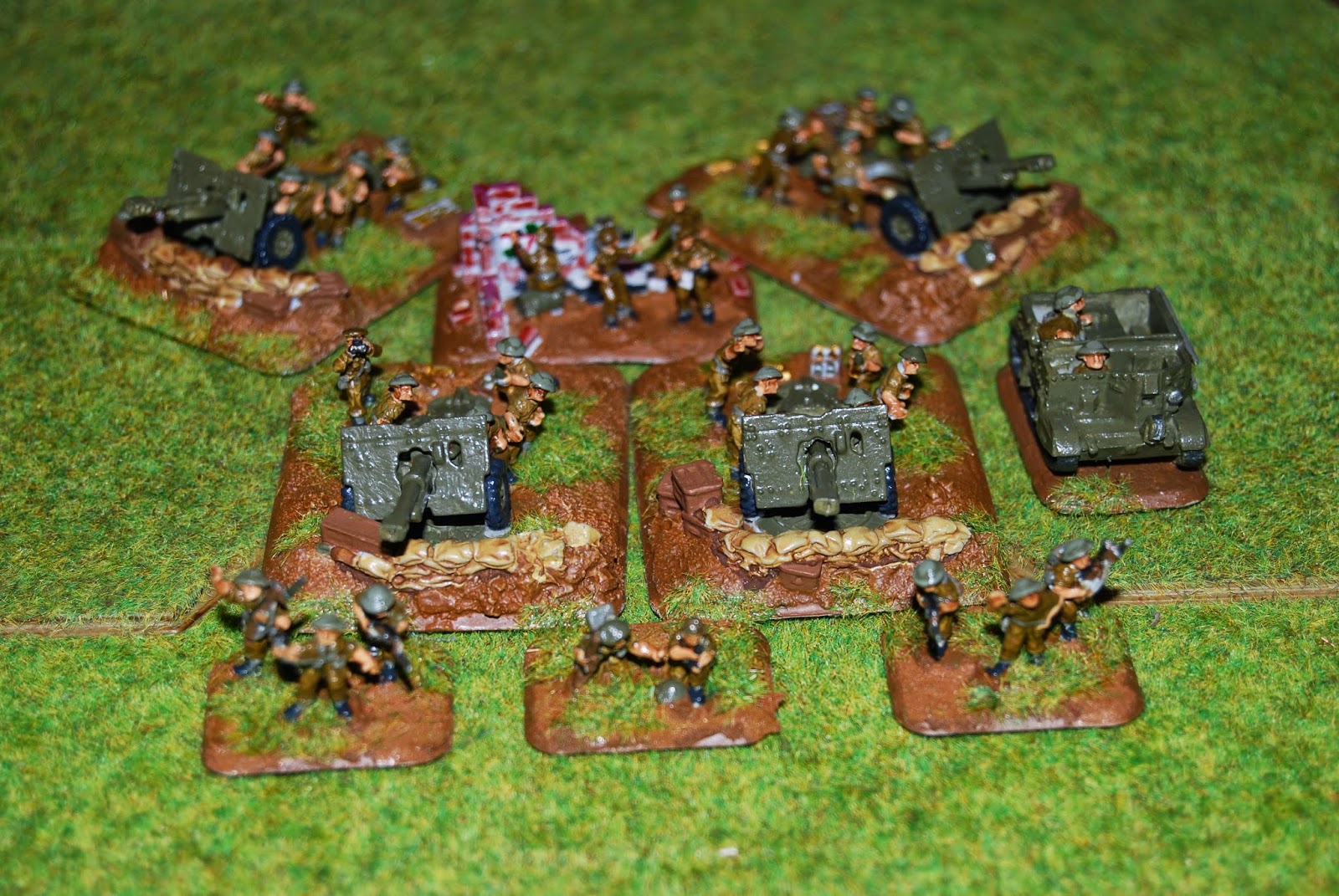 The staff team, a despatch rider hands over an urgent fire request. 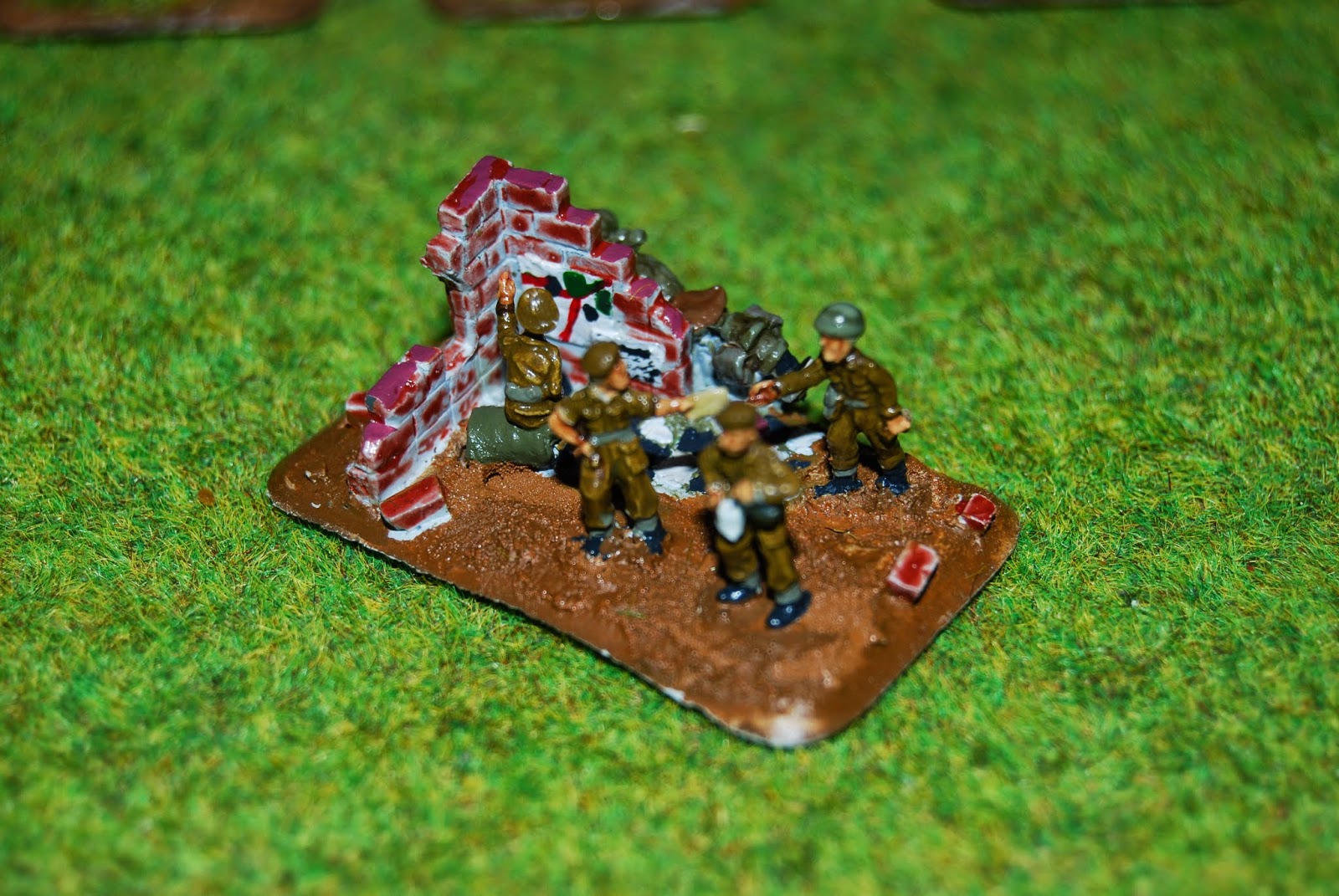 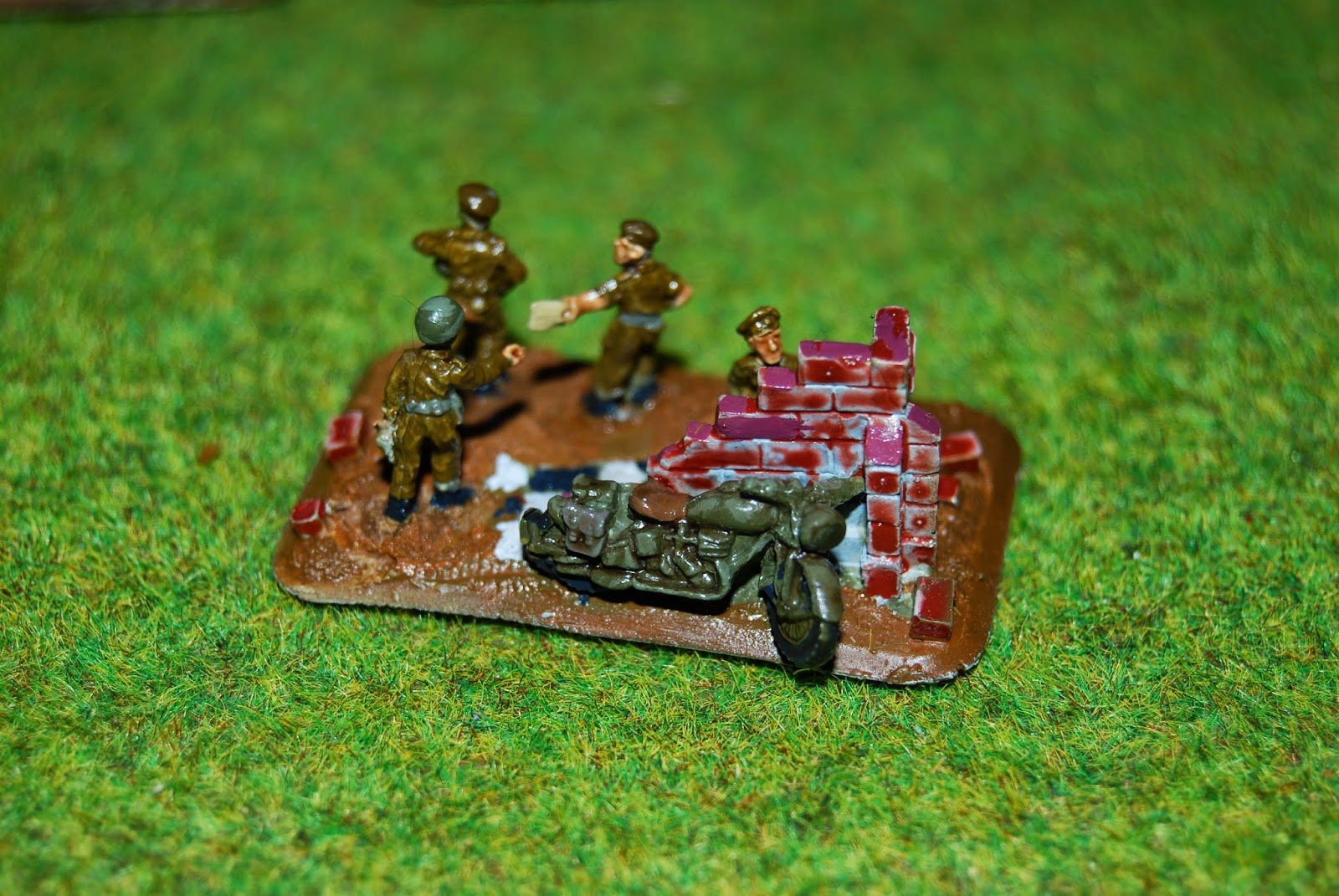 When I finish the Shermans and Cromwells I've been putting together, I'll post pics of the British armour.

Thanks for looking.
Posted by Andy Canham at 20:19 3 comments:

It's WW1 week at school for my son at the moment.  He asked me what WW1 aircraft looked like, which took me aback at first.  For me growing up in the 60's, both granddads were WW1 veterans and I had several Great Uncles who were also veterans, plus a Great Uncle who as part of family lore had died at a place called Merville in N France in 1918.  As an aside, I found his burial place in Aval Wood Military Cemetary, just outside Merville, so family lore was pretty accurate.  Sadly, I found he died within 2 days of arriving in France, at the age of 19 - not enough time to understand what was going on!  Anyway, stories from my elders and a trusty Airfix catalogue, plus a copy of "Biggles Pioneer Airfighter" meant that I was up to speed with Fokkers, Rumplers, Albatross, Camels, SE5a, RE8s, Handley Paiges and Bristol Fighters before I knew my times tables.

So, as he was interested in what they looked like, I decided apart from internet pictures, I'd build him a model.  I looked at the next show coming up, which was Phalanx in St Helens.  I was surprised that no one there was selling Airfix WW1 model aircraft and mentioned this to Will from the Deeside Defenders club.  He mentioned he had a model he wasn't going to build and brought it along to the next club night as a gift for my son.  So, I found myself with a Sopwith Pup model to put together.  Although fiddly, it was surprisingly easy to assemble and a lot of fun to paint.

A change from the kits I remembered from my childhood was the addition of a pair of formers which held the upper and lower wings in lace to give the model the correct dihedral angle.  Still fiddly, but less so. 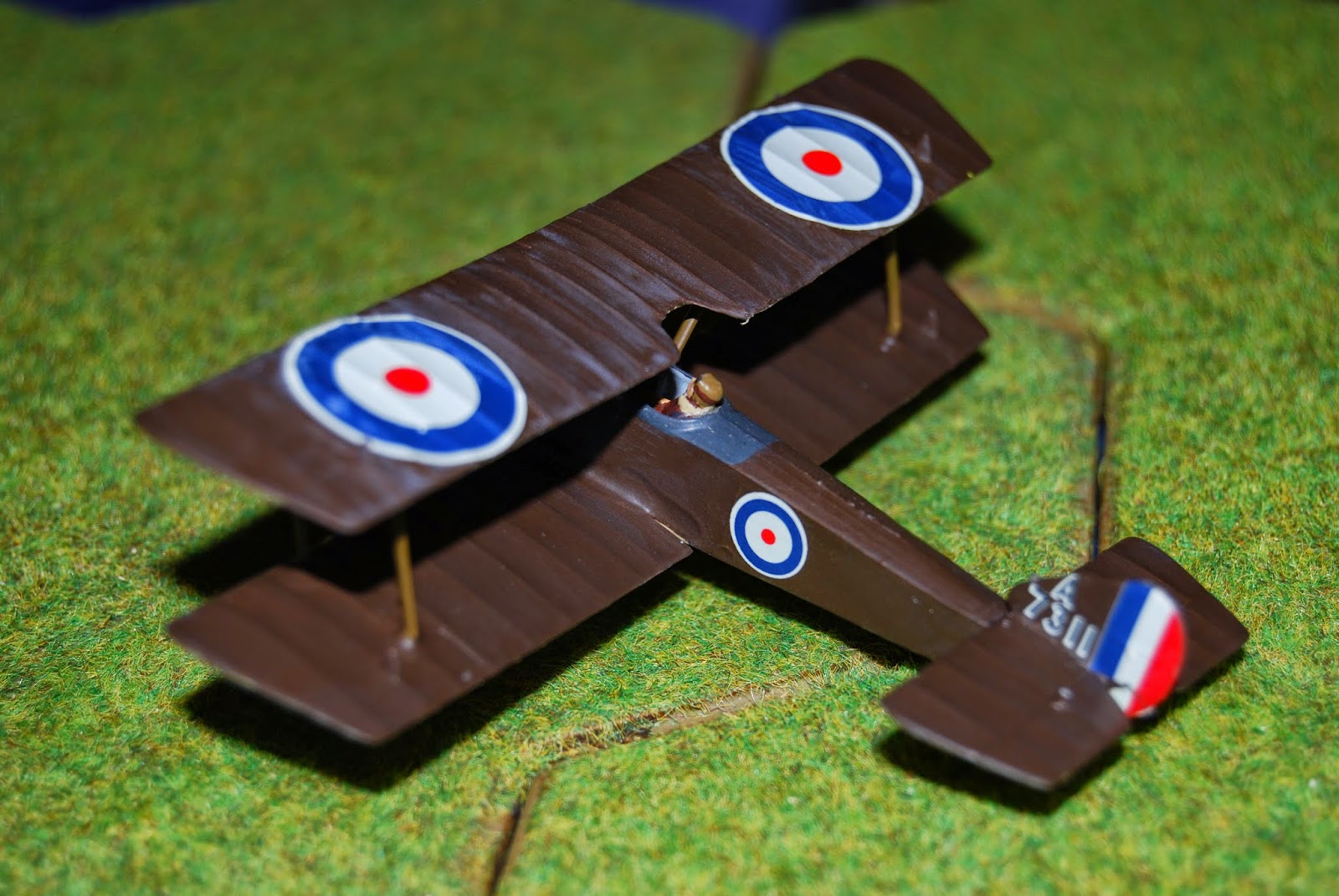 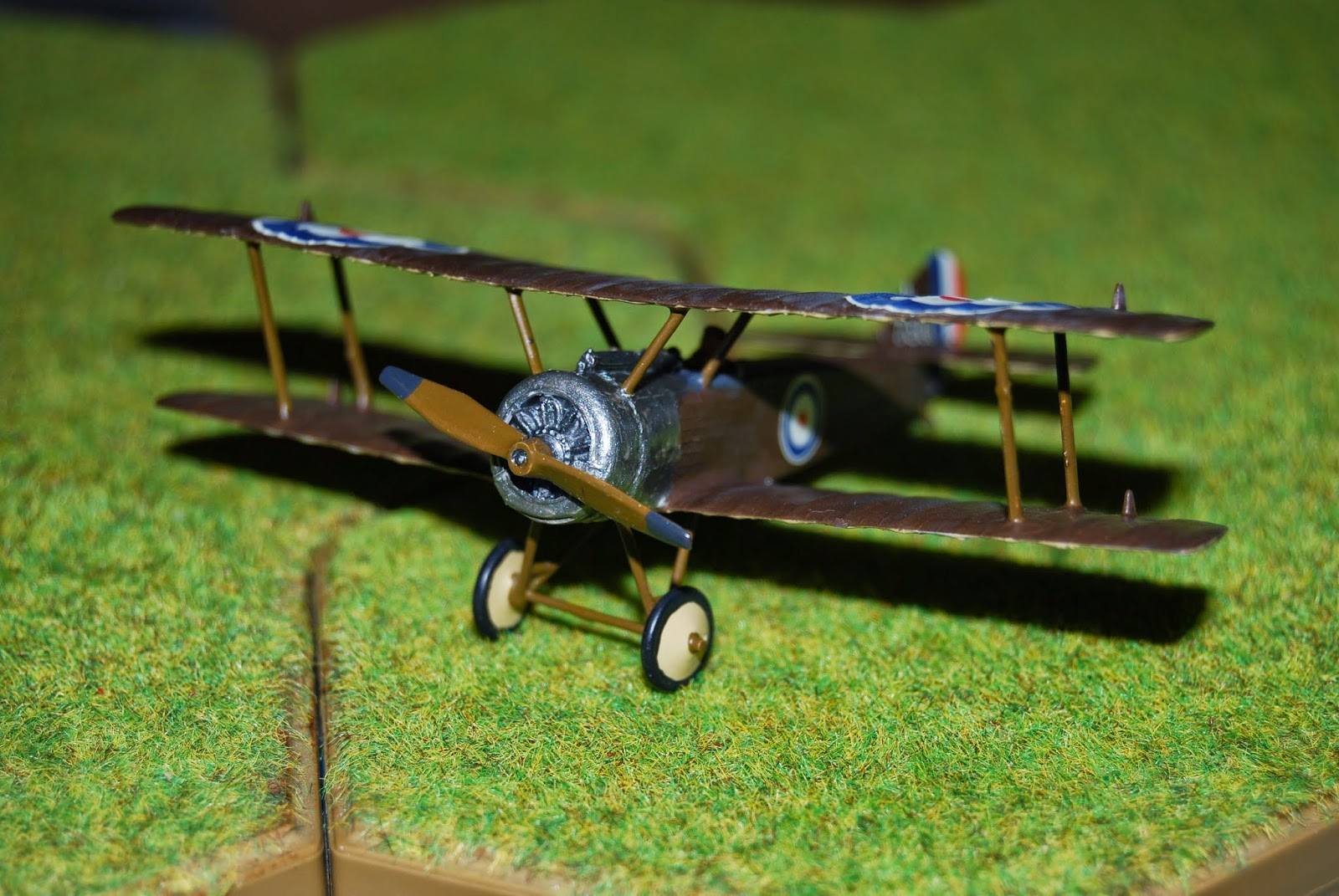 Slightly wonky under carriage.  Was slightly off before painting,, but seems to have worsened as the paint and varnish built up. 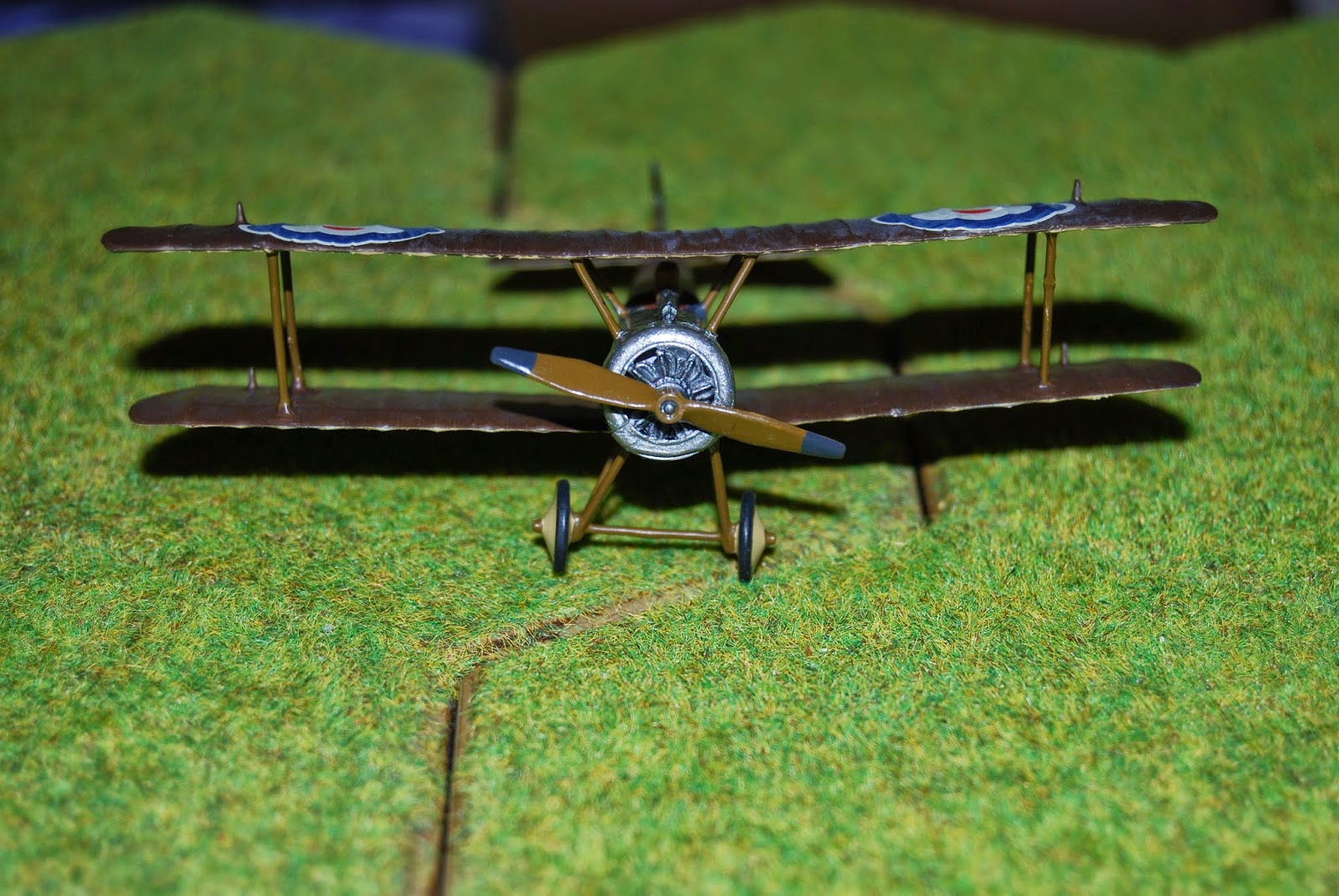 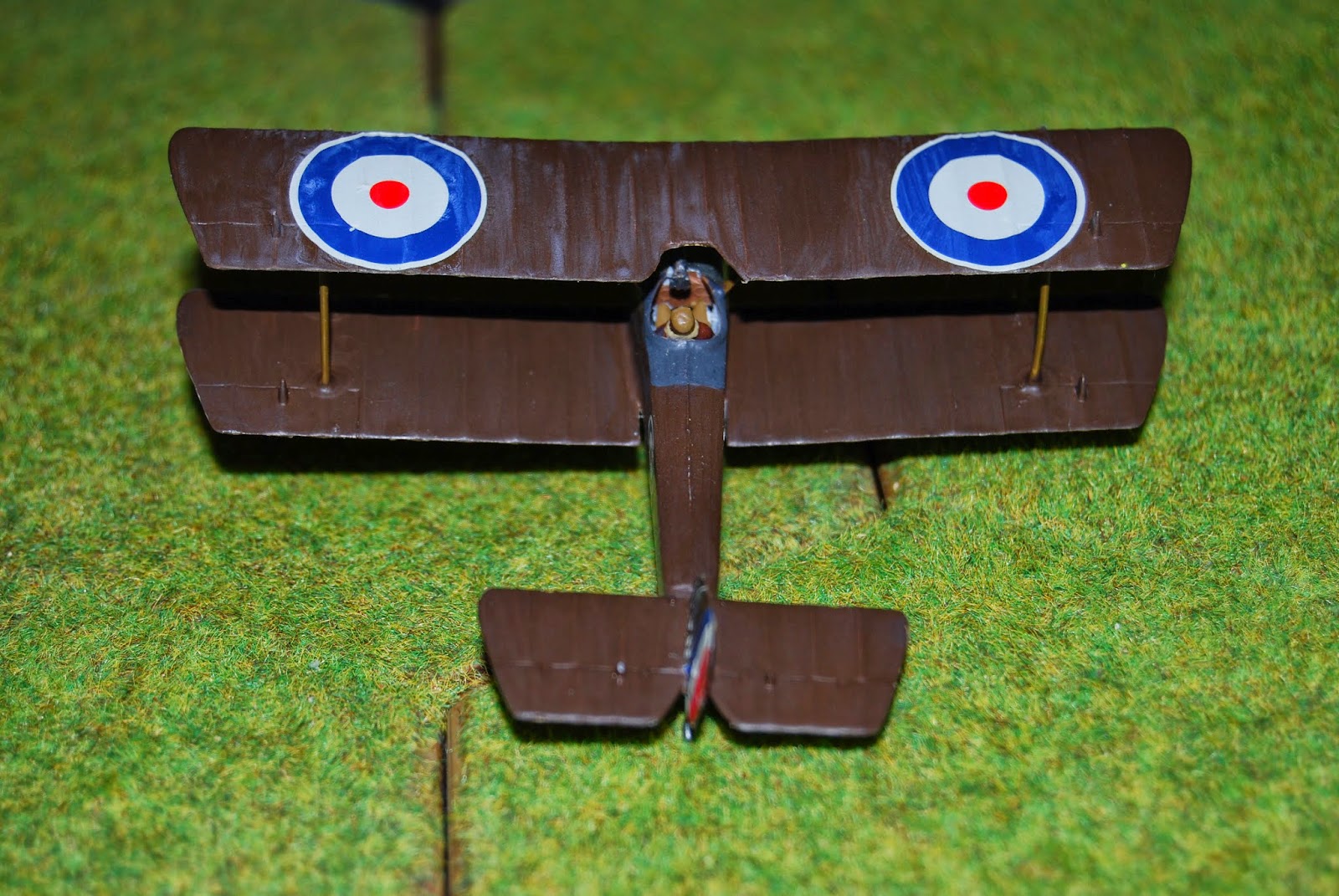 Fun to build and paint, I was seriously thinking of rigging the flying wires, but then remembered it was for my son, who's almost 6, so I figured it was probably a waste of time.  All I have to do now is hand it over and wait for the crunching sounds......!

Thanks for looking and thanks again Will.
Posted by Andy Canham at 22:58 2 comments: