I split a box of Orion winter WW2 tank crew with Will at the club, so decided I'd test out a handful of figures, opting for the five in combat poses, three carrying M3 SMGs, or grease guns, and two armed with pistols.  They are wearing khaki pants/shirts or overalls, with a pale green-khaki wind cheater over the top, helmets and goggles. 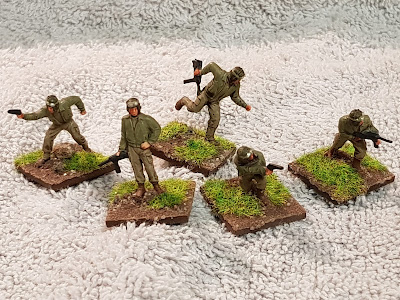 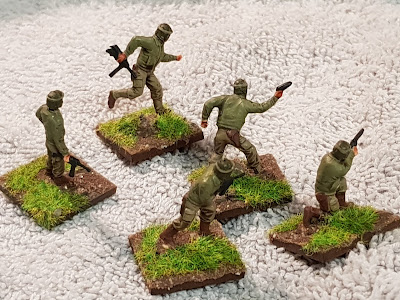 Interesting figure as I thought he bears more than a passing resemblance to a certain Clint Eastwood in Kelly's Heroes, which immediately made me think of a conversion with a fez head swop - no doubt it's been done many times before.  Looking more closely at the face though, I detect a certain resemblance to Brad Pitt in Fury, so I guess it's up to the beholder to decide if there is indeed any Hollywood resemblance - I'm sure the manufacturers would indicate it is purely coincidental. 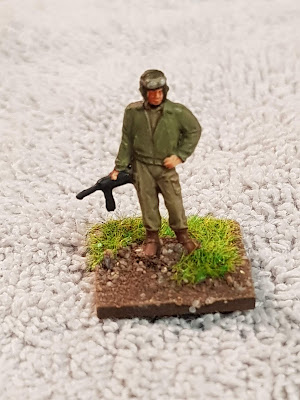 As ever, thanks for looking.
Posted by Andy Canham at 11:55 No comments:

I picked up a pair of SHQ SAS jeeps at WMMS 2019 and they have languished in the "to do" pile all year, until I assembled them in a splurge of model assembly last month.  I then thought about dismounts, and decided to go with some Britannia Royal Marines - I think designed for D-day, wearing berets.  I picked these up at WMMS 2020 - fast worker me!  The SAS appear to have worn parkas with a similar camo pattern to the Denison smock work by airborne, but I wanted to make them a little different, so I could tell them apart of the tabletop, hence the marines, as they are carrying Bergen packs.  I did think about trying to model hoods in resin, but in 20mm, I figure the paint job is enough and the Bergens hide most of the area anyway.  The SAS in Europe didn't wear the sand coloured beret, opting for maroon like the airborne.

So, the pair of jeeps, armed to the teeth with 5 Vickers K-guns, two forward facing for the front seat passenger, one for the driver, to give him something to do as if driving wasn't enough, and a pillar mounted pair for AA duties at the rear.  The jeeps come with two crew, but I added a third crew man using spares from an SHQ jeep crew pack. 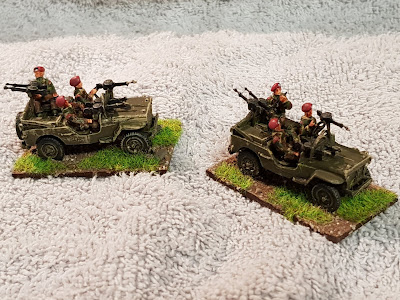 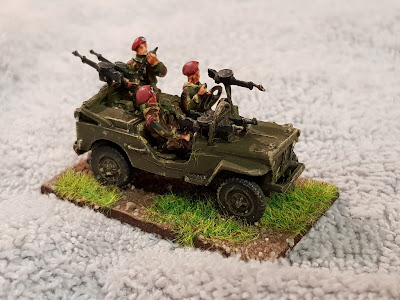 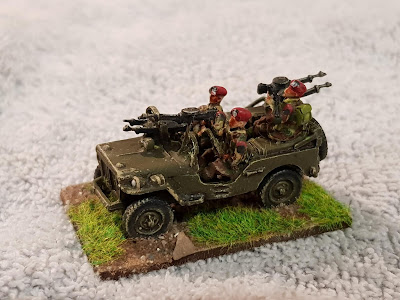 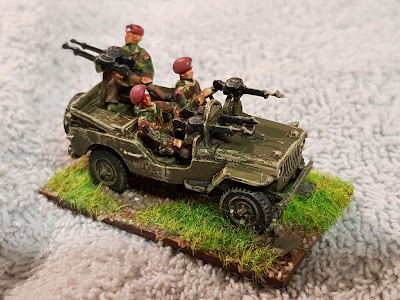 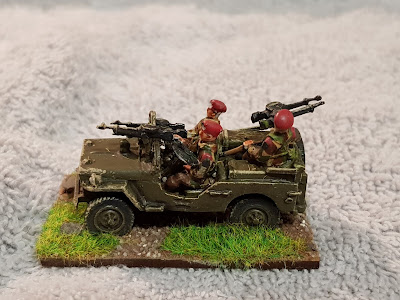 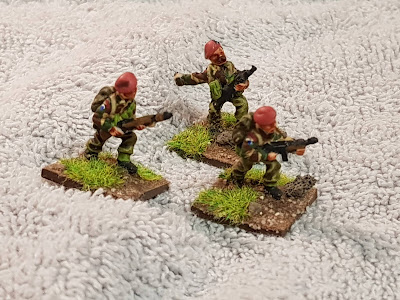 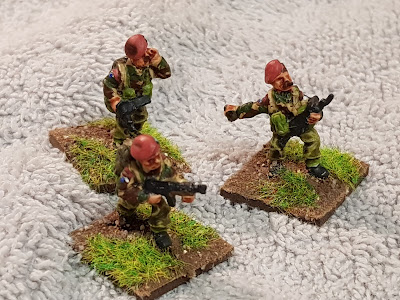 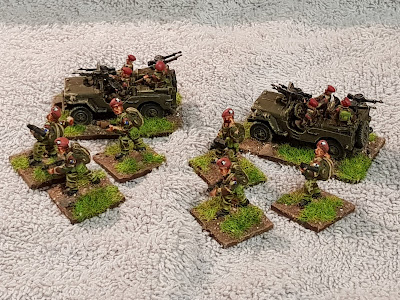 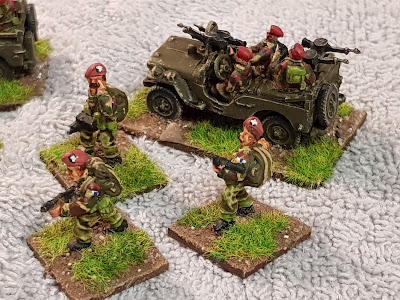 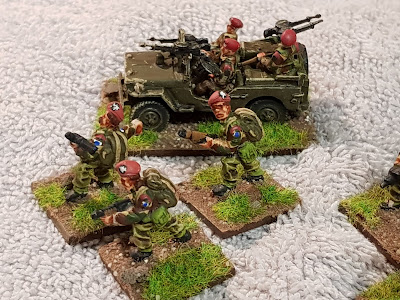 Richard, Will and I put on a game at WMMS this weekend for the SOTCW, using Richard Crawley's fictional Black Sea country of Andeivia.  So far, we have covered Andreivia (roughly where Georgia might be in the real world) in WW1 and in the late 20th/early 21st Century.  This time, we placed the action in 1943 during WW2.  The game used Battlegroup rules with stats taken from Kursk and Tobruk, in 20mm scale.  The scenario involved the early stages of a German "raid" to secure a valuable stash of minerals essential to their war economy and known to be held at the quayside of Andreivia's main port near the capital, Tcherbevan.  It was also a handy way to test out the loyalty of the local population to the Soviet authorities and any non-Soviet factions that could represent possible Axis recruits.

The Germans paradropped a platoon of Fallschirmjagers adjacent to the quays, while landing an infantry platoon with support from Pz IIs and Pz IIIs (2 of each) along the coast adjacent to the harbour.  The call also went out to various local falangist militias, who seized village centres around the port in an attempt to isolate the area from Soviet reserves.

The Soviets had a platoon's worth of locally recruited units of the Red Army garrisoning the port, including an AT gun covering the beach and a mortar section inland, together with various local militias based on the Soviet partisan organisations recruited from dock workers.  Crucially, the docks also held an NKVD unit with integral armoured car support, helping to ensure the loyalty of the locally recruited troops.  Area reserves included 4 ageing T-26 tanks from the nearby tank driving school, plus a lorried infantry platoon.

The table layout as the game started. 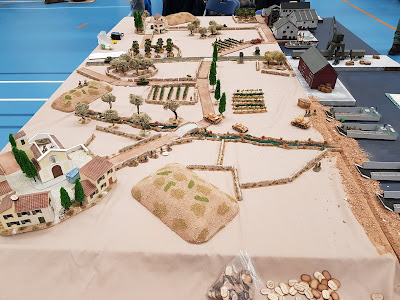 Andreivian falangists in control of a nearby village. 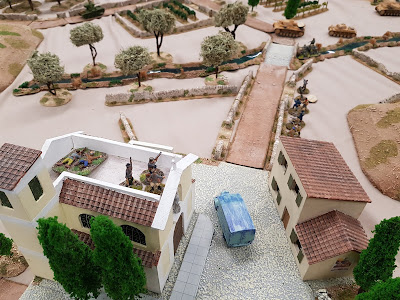 A T-26 from the reserve moves hesitantly along the railway line - watch out for paratroopers in the woods. 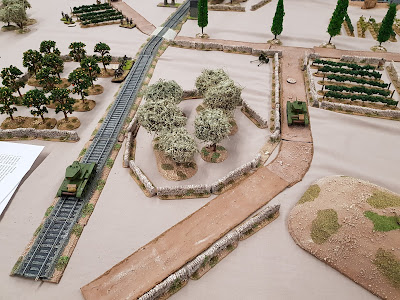 The paratroopers dropzone - sadly, the open terrain was covered by Soviet defenders, so between landing casualties and incoming fire, the paratroopers were badly mauled. 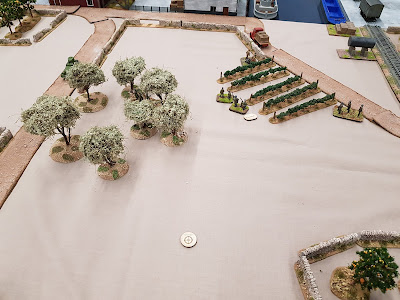 Panzers push inland.  A single paratrooper section managed to silence the AT gun covering the beach, which allowed the armour to deploy, although infantry in the quayside buildings and fields seriously delayed infantry deployment from the landing boats.  The same paratrooper section then ambushed a T-26 on the railway, destroying it and delaying the Soviet response until the Panzers were in a better position. 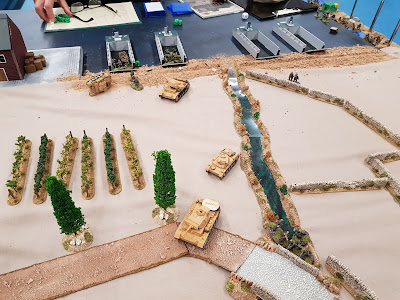 Sadly, the game took up most of the time there, together with some shopping.  By the show's close, the Germans had a single Pz II runner, but an immobilised Pz III covered the direct approach of what was left of the Soviet reserves.  The fallschirmjager were just about wiped out, but had effectively dealt with the garrison troops and workers partisan groups around the docks.  The falangists had been spectacularly ineffective all game, so were in good shape to assist any incoming Axis second wave or disperse quietly if the Soviets reinforced first - as might be expected.  All in all, a fun game, some interesting events and tactical situations and a great try-out ahead of our weekend game at Crisis Point later this month.

There were lots of great games at the show, but I only managed to remember to take a photo of this one, a French-Indian wars table with a great wooden stockade/fort at the far end of the table, but loads of little actions going on all round. 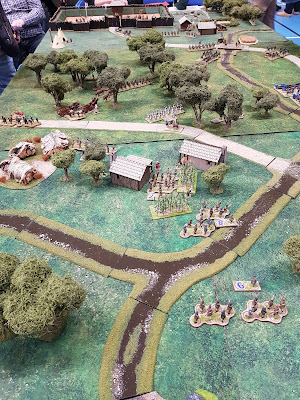 As I've been working on a variety of jeep transports recently for US and British forces, as well as British paratroopers, it was nice to get a couple of shots of the US re-enactors jeep display.  It was quite bizarre at the end of the show as Will and I were heading off to Chester, the jeep, towing a 37mm gun, pulled out in front of us and made it's way through the traffic - I wondered how many passers by would have had to look twice. 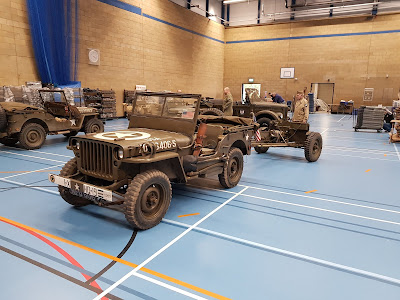 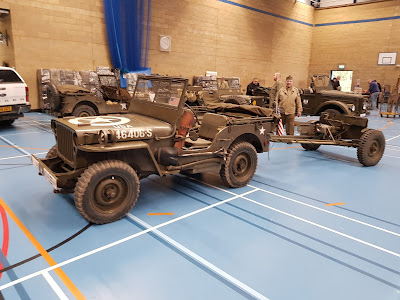 As ever, thanks for looking.
Posted by Andy Canham at 13:18 2 comments: