To wrap up Phil's AK47 Republic force, he asked me to paint up some Israeli infantry from Peter Pig.  I painted them up as I did my Israelis for Force on Force (http://sedimentswargameblog.blogspot.co.uk/2015/02/15mm-israeli-infantry-company.html), but they are based 4 figures to an infantry base (8 bases) and 2 figures to an RPG base (4 bases), plus two three figure command bases.  This style of basing will work well for AK47 Republic and also for the FoW Arab-Israeli war rules.

The whole group, four groups of three bases as used in AK47, plus command. 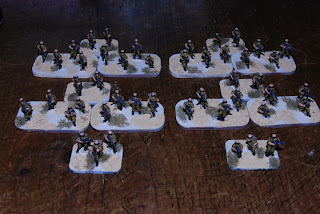 One of the command stands plus a three stand group (2 infantry and 1 RPG). 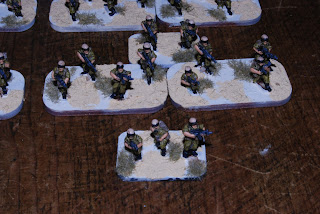 Another group plus command. 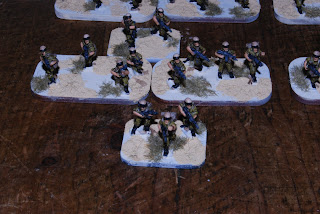 Detail of some of the infantry figures.  These are from the AK47 moderns range from Peter Pig and are superbly detailed figures which paint up really well.  There is a lot of deeply etched detail which really responds well to ink washing techniques. 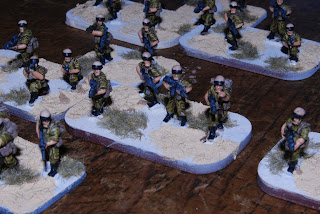 Not sure if I like the basing.  The stands are painted using a Wilko sand house emulsion paint, with random splodges of Vallejo desert basing medium and some Gale Force 9 arid static grass.  I have to say that I hate this particular type of static grass with a passion - it is always clumpy and clogs up my applicator dreadfully.  Compared to the meadow green static grass that I use from Kallistra, which is a joy to use, it is horrible. Moan over!

Thanks for looking.
Posted by Andy Canham at 19:15