Pete and I tried out Richard C's unofficial battlegroup modern rules again on Thursday.  Another 500 point meeting engagement saw my British armoured battlegroup take on a battle group of Pete's Soviets.  My force consisted of a troop of Chieftain Mk9s, a mechanised platoon of infantry, an FHQ and a mortar spotter, each in Landrovers, an FV438 Swingfire and 2 tubes of off-board 81mm mortars.  Pete's force appeared to consist of a 4 tank troop of T-72s and a platoon of infantry in BMP-2s.

I was out scouted so took a chit (a 5) and Pete won the initiative dice roll.  He moved up so his ATGM-armed BMPs took up concealed positions at the edge of woodland and behind low hills at his end of the board, while his T-72s moved en mass towards my right flank.  In response, I pushed my Chieftain troop down my left flank staying out of sight behind some low hills.  My mortar spotter, a section of infantry and the FV438 took up positions in the wood next to the Chieftsain troop, while the rest of the platoon and FHQ headed for the woods on my left.

End of turn 2, table view from the British table edge.  Note the Chieftains skulking behind the hills and the woodlands filled with assorted infantry.   In the distance, Pete's infantry are rushing forward, while his vehicles overwatch. 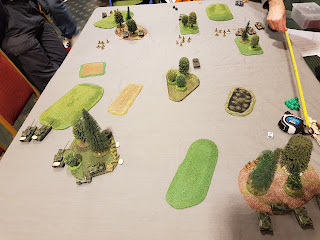 Turn 3 and I suffered a rush of blood and moved the Chieftains up to take firing positions hull down on the hills.  A flurry of ATGM fire from Pete's overwatch BMP-2s had little effect, but T-72 fire did for one of the Chieftains.  In response. the surviving Chieftains engaged 2 BMPs and a T-72, achieving a total of no hits.  Turn 4 saw Pete despatch the remaining Chieftains with T-72 fire and an ATGM.  Having despatched by Chieftains, he thought the game was over and pushed his dismounted infantry forwards, supported by BMPs, while his T-72s unsuccessfully took long range shots at my infantry on the right.  Worried about the infantry approaching on the left, I sent an FV432 out behind the destroyed Chieftains in the hope of putting it on ambush fire ready for when the Russian infantry come over the hill in front.  Turns 3 and 4 saw my mortars raining some harassing fire on Pete's infantry and T-72s, causing some pins.

End of turn 4.  BMPs and infantry pushing forwards on the British left and centre.  T-72s shoot at the British right. 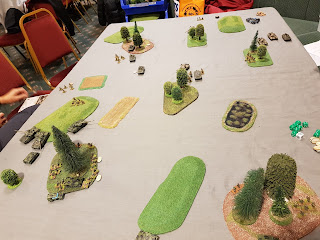 Turn 5 saw Pete get unlucky with command dice with little movement, just some ineffective long range tank gun fire on my infantry.  My troops decided to keep their powder dry, except for mortar fire, which did for one of the BMPs on the left.  Lots of sections on ambush fire.  However, my rifle squad took a long range Charlie G shot from the edge of the woods on the right at the BMP in the centre and brewed it up. 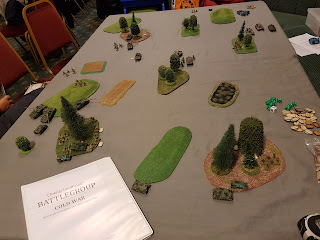 Burning Chieftains.  The FV438 realised it had the dismounted observer option, so dropped them off at the edge of the woods and retired to take up a new position behind the woods. 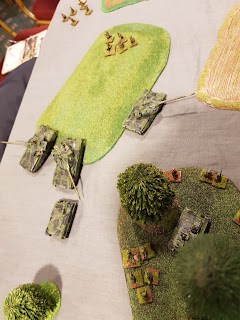 The brewed up BMP - lucky for Pete his squad had just dismounted. 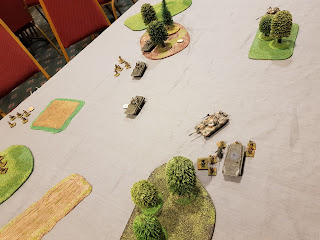 Turn 6 saw in interesting but totally ineffective small arms duel between Pete's troops on the left and my infantry in the woods, involving his two infantry squads on the hill moving up and exchanging shots with Brits in the woods including ambush fire from a GPMG and rifle section, as well as ambush fire from BMPs.  All either failed to spot or missed.  On the right and centre, Pete's T-72s closed the range, while his infantry pushed forwards.  Fire from these infantry cut the rifle section down to one Charlie G armed figure, but he passed his morale test so didn't break.  In the British turn, fire from an FV432 and the various infantry in the woods swept through the exposed Russians on the hill, clearing it of all but the dead and wounded.  The sole surviving Charlie G trooper pulled back into the woods, where the platoon command section waited in support. 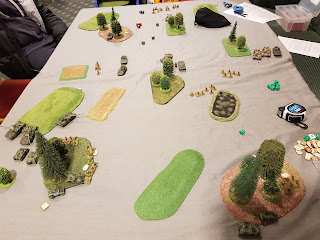 British infantry in firing positions from the edge of the wood. 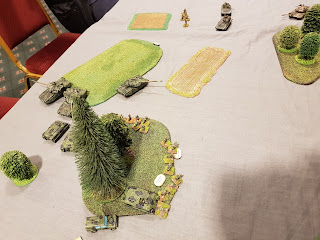 The effect of long range T-72 gunnery on the British right. 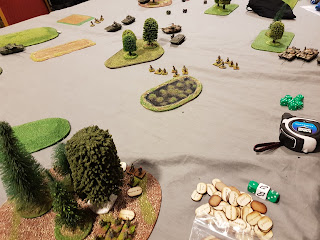 In the final turns, Pete's infantry and T-72s either couldn't spot or hit any of the Brits deployed in the woods on the right and even when a hit was achieved, the British managed to save on a 5+.  The British finally got the FV438 in firing position and promptly despatched the central T-72.  Unfortunately, mortar fire was wildly inaccurate on the Russian infantry and drifted towards the British so was called off and radio comms went dark in the last turn.  However, Pete announced that he was 1 BP from breaking, whereas I hadn't reached 50%, so it being almost 11pm, we decided to call a halt, the Russians pulling back and the British moving to take up new firing positions.

Once again, the rules were fast moving and fun to play, emphasising tactics, rather than fumbling through lists.  The new QRS sheets from Richard C really speeded up play even more, as did our knowledge of the stats and taking the time to locate the values for the specific vehicles we were using.

The only real question we had was whether vehicle ATGMs needed a reload order when they had fired their ready missiles.  We figured they had to take a turn out to reload, but did they need a reload order,

Observations on the game.

As the British player, I thought my goose was cooked when I lost the Chieftain troop.  These rules, however, give infantry their proper role of holding ground and denying it to the enemy.  It was heartening to see Pete's reluctance to approach infantry with Charlie Gs within 30 inches.

It did come as a surprise how difficult it was for the British to hit anything at long range.  What was even more surprising was that hits were generally ineffective, whereas T-72s firing back seemed to brew up Chieftains with each hit.

The British mortars were effective as harassing fire on infantry and armour, but killing hits could also be surprisingly effective against the thin armour on BMPs.  Pete really missed any off board artillery, which would have been a real plus in digging my infantry out of the woods.

In conclusion, a fun game, real period flavour and lots of interest from a lot of players I wouldn't normally associate with modern gaming.  So much so that devoted 20mm gamers are buying 15mm armies to be able to play these out with us.

As ever, thanks for looking.
Posted by Andy Canham at 10:47