A couple of weeks back, Will and I played out the second game in our Torch campaign.  All our map moves had resulted in the allies making a series of strategic withdrawals, in an attempt to pick fights on their own terms and at better odds.  This led us to the second of the pre-planned scenarios from the Battlegroup Torch campaign rulebook, Blood and Gore.

My plucky Pz IVs moved up astride the road, dealing with Will's Crusaders hull down on the right flank.  Sadly, one of the Pz IVs was KOd by mortar fire and a failed morale test 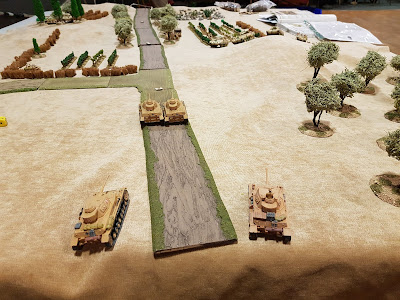 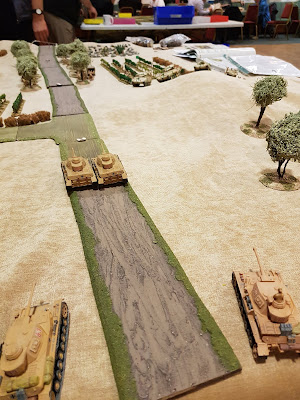 By turn 4, a platoon of Pz IIIs and a Pzgrenadier platoon in Sdkfz 251s had arrived.  Tanks and infantry dealt with Wills forward infantry deployed in rough terrain on the left in the photo below.  Another Sdkfz had charged up the road, and sprayed MG fire on the 6pdr deployed in an olive grove adjacent to the road, while everyone else tried to suppress the 6pdr and remaining Crusader in the woods rear left.  In the distance, Will's Valentine tank reserves were lumbering forwards on and adjacent to the road. 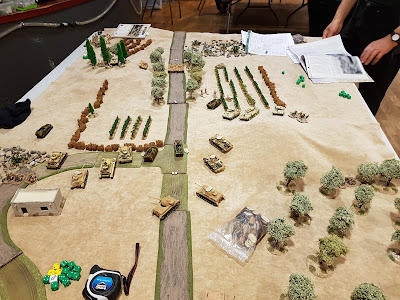 Pzgrenadiers skirmishing with Will's infantry in the vinyards. 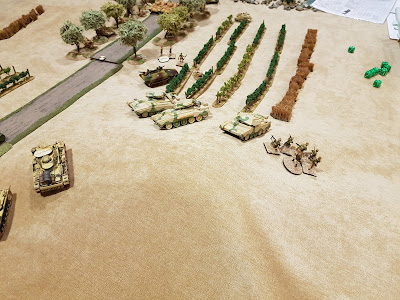 Sadly, Will's 6pdr in the woods led a charmed life, unlike my panzers, and the Valentines advanced in line abreast causing mayhem amongst my 251 transports.  Even more devastatingly, I consistently failed to get a comms test through from my FHQ, so the lovely 150mm battery in support managed to fire just once. 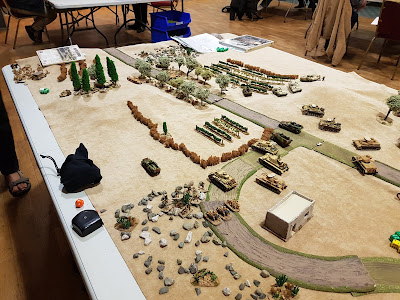 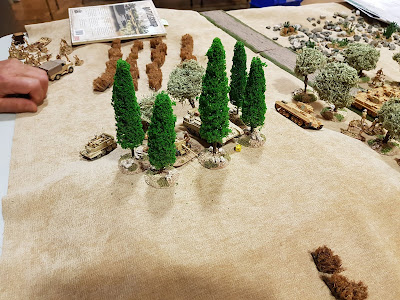 As chits accumulated, they seemed to be 4s and 5s for me and 1s and 2s for Will, and eventually my force reached it's breakpoint.  Another allied victory snatched from the jaws of defeat.  So the next round of map moves will kick off next, with the allies getting more reinforcements, so I expect some meaty battles to come.

Thanks for looking.
Posted by Andy Canham at 14:57