End of the year and on the whole 2022 has been quite kind overall, despite some upsets along the way.
Modelling and painting early in the year focused on 3D printing various Cold War and WW2 vehicles in 15 and 20mm.  I had a big push on getting an NVA/VC army together in 15mm ready to do battle against ANZACs for a club Saturday game.  With the cooler weather, the printer is having a rest.  I've focussed on 20mm US troops for Vietnam (60/70s NW Europe too), plus 28mm Late Roman's, both projects with lots to do.  I've also started a 15mm VDV unit to go with some of the 3D printed vehicles.  Then there has been a dalliance with 28mm WW2, with a platoon of Waffen SS panzergrenadiers completed, plus some odds and ends (Volksturm, Heer, Hitler Youth, etc).
In 2023 I plan to continue with the Late Romans in 28mm, as well as a Viking warband from Santa (possibly my Mrs), and maybe British paratroopers.  In 20mm, I've just placed a small order with Elhiem for some insurgents to polish off my irregular forces.  Santa also brought me a copy of Xenos Rampant and I am thinking of using Star Wars Legion 501st Legion for this as well as a starter pack of Stargrunt infantry from GZG I've had for years in the stash.  I also took advantage of an Airfix sale to add an Italian farm and town house and Czech restaurant to my 20mm buildings, so more on them this coming year.
Below are a couple of shots from a game of Chain of Command played at the club in December.
Owain's rather rash US glider infantry advance across a field, praying the Germans dont deploy in the hedgerow. SS panzergrenadiers are exchanging shots with US Paratroopers in woods out of picture on the left.  Superior firepower and a couple of double activations have caused huge casualties to two US squads and their MMG teams.  The SS have taken casualties from a sniper and return US fire from the woods. 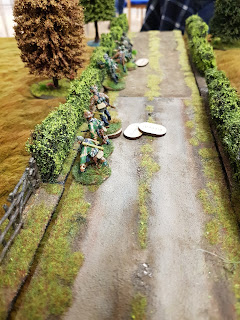 On the German left, a full squad of SS panzergrenadiers awaits those rather relaxed US glider infantry crossing the field in the first photo. 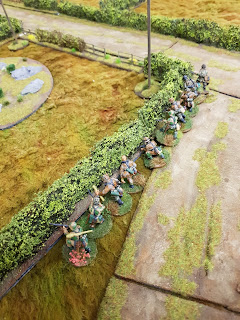 In the game, US morale had plummeted and they were throwing 2 dice for commands.  We called it a night shortly after.

Thanks for looking.  Hope you all had a Merry Christmas and have a very Happy New Year.