At the Derby show last weekend, I picked up a couple of packs of Operation Nimrod SAS figures from the Urban range of Combat Miniatures, available from Stonewall Figures.  These are nice figures, a little smaller in stature than Elheim or Britannia Miniatures, but not significantly so.  There are 5 figures in the pack, all wearing overalls, four wearing NBC suit hoods and respirators and one bare headed, presumably the commander.  He and one of the troopers are armed with a pistol, the other three figures carry what look like Heckler and Koch semi-automatic weapons.  There are various pouches strapped to arms, legs, waist and hips, plus grenades and what looks like a hammer or folded grapnel hook.  The commander wears a headset with microphone.  Detail is quite crisp and raised detail responds to dry brushing well.  One of the commander figures had a miss-cast pistol which was missing the barrel, but this was easily replaced with a piece of flash cut from another model. 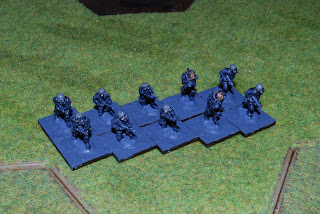 To reflect the very dark grey or black uniforms worn by these troopers, I base coated them Vallejo NATO black and then progressively dry brushed them basalt grey, then neutral grey.  NBC hoods are green grey.  Weapons were given a slightly heavier neutral grey dry brush, as were gloves.  For me, the prominent feature of contemporary photographs is the way the mask reveals quite a lot of the eye and surrounding eye socket and parts of the forehead, nose and cheeks, so I used flat flesh to paint in the lenses of the respirators.  Everything was washed with Army Painter dark tone ink diluted 4:1 with a drop of airbrush flow enhancer added to help the ink flow into the nooks and crannies.  They are coated in Vallejo matt varnish with gloss used for the respirator lenses.  The bases are coated in Tamiya tarmacadam basing medium. 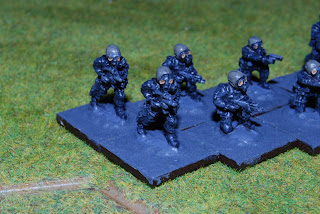 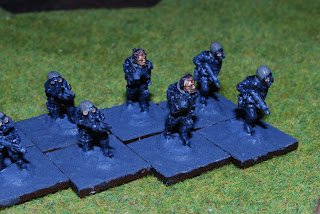 I assume intentionally, the commander figure bears more than a passing resemblance to John McAleese, who, according to Wiki, led the SAS assault team that stormed the Iranian Embassy in London, back in 1980 (Operation Nimrod). 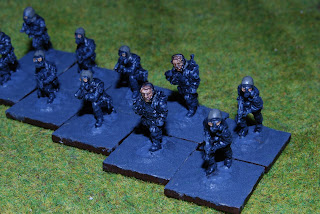 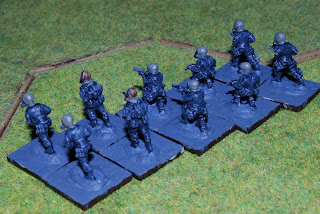 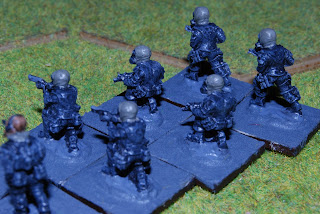 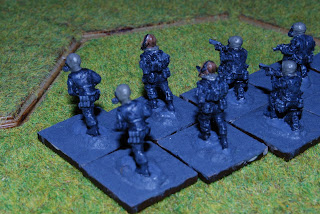 Will now have to think of suitable rules to use these guys on the table top, possibly Force on Force or I'm tempted by "Geezers .... "Shut It"" rules, which are more for recreating 70's cops and robbers action, but which I've seen on various blogs used for actions in Northern Ireland and others spanning the gap between civilian police actions and full military operations.

As ever, thanks for looking.
Posted by Andy Canham at 08:45