So, first up this week I tried out my first terrain piece for 20mm.  This is a 100mm square mdf base from Minibits with oil drums, wooden packing cases and a 20ft storage contaner, all from Sgts Mess.  The rubble pile is made from aquarium gravel and the base is textured with PVA glue mixed with a Cinnamon coloured household emulsion paint and sprinkled with aquarium sand.  Static grass spots were added once the textured base had dried.  This is going to represent a builders yard or outdoor storage for a small industrial workshop. ﻿ 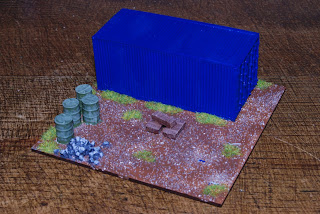 I also worked on the next group of figures from my Xmas pressie, this time Falklands/1980's era British soldiers wearing cap comforters.  These are all from RH Models Liberation range.  The range extends to snipers, Carl Gustav gunners, radio operators and commander/leader types, so useful for mixing amongst figures in berets, helmets or SAS kit to give a more rag-tag mix and match look to your units. 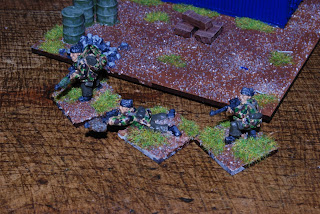 The Charly G gunners, two figures with a loader. 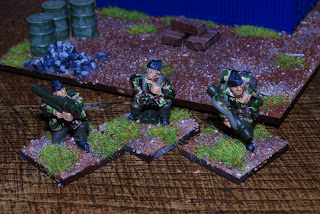 The RTO operators.  I might replace the aerials with nylon fishing line later, but for now these are fine. 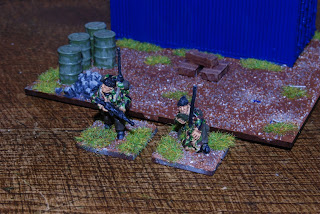 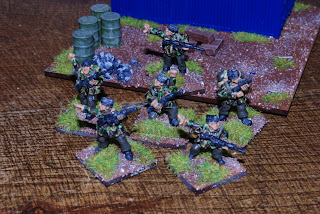 Nice figures that should add some variety to some of my special forces units for the Falkands and Cold War.  I can see these making an appearance in our play test of the Red Star White Lights scenario book.  They will also fit the bill as either government or rebel forces for our "Winter of 79" English civil war scenarios and I can see them appearing in Andreivia in the search for their missing SAS colleagues captured by insurgents in the hills south of Tcherbevan.

Thanks for looking.
Posted by Andy Canham at 09:35