Well, what a week for my Wargaming hobby.  Early on, I wrapped up this platoon of RH Models 1980's British infantry.  I then moved on to a cell of insurgent infantry for "Winter of 79" and wrapped them up as well, before moving on to the heavy weapon supports for my Argentine/Norway force.  I've also had various civilian/police/insurgent figures occupying a corner of the painting table, which I've been working on off and on for a few weeks, and I managed to get them finished too.  Then Thursday at the club was our 10 player D-day landings game using FofW, which worked surprisingly well and looked spectacular considering it was put together in an hour and played to completion in the evening.  Then I did a deal on the Guild of Wargamers (thanks Richard and Ben) and picked up some modern British armour and my order from the Plastic Soldier Valentines Day sale arrived as well.  Oooh, and the Works had restocked with some new BTR-40s and BTR-60Ps.  More of all that in future posts.  Back to the British infantry.

These are all from the RH Models Falklands/1980's British range and are in DPU with Mk 6 helmets, although you can't tell as they are covered in skrim.  In front is the platoon command section (I need to add a 50mm mortar man), with behind them three sections, each of 4 SLR riflemen, a GPMG gunner and assistant and a Charlie G gunner and assistant.  At the back are some spare SLR figures and a pair of bren gunners.  On the left are three snipers. 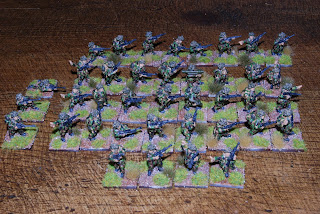 One of the GPMG gunners in the middle, with Sterling SMG to left and Charlie G on right. 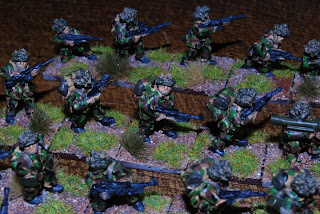 The Charlie G gunner in the middle with assistant on right.  Another fuzzy Charlie G in the foreground. 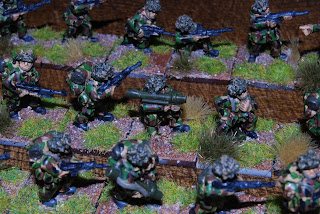 Troops-eye view of part of the Platoon HQ. 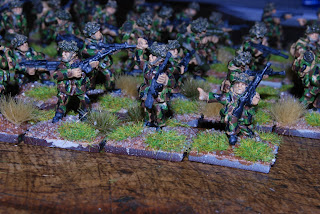 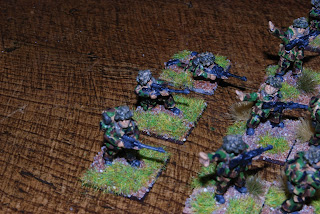 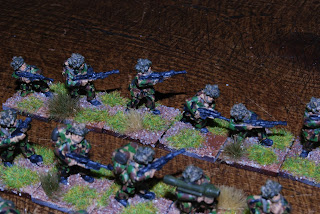 Some of the figures in more detail, because I like the poses, even though the close ups reveal my poor painting skills. 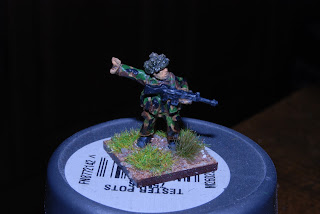 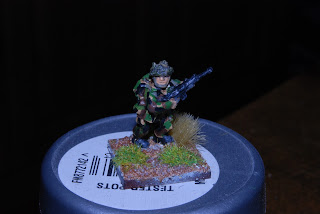 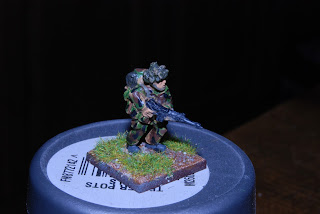 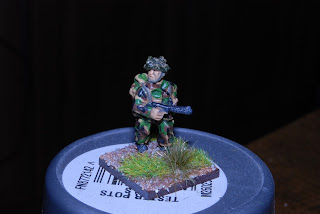 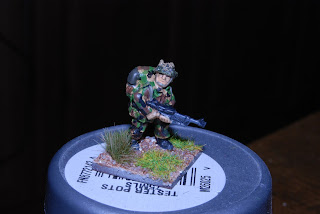 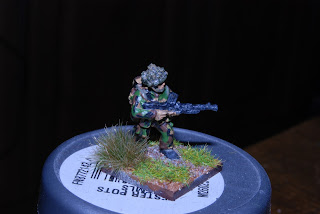 So, another platoon of British infantry, ready to retake the Falklands, put themselves in harms way in Europe or patrol the streets of a Britain in the grip of civil war in the late 70's.  I painted them the same way as previous DPM, but used a brighter green (German camo bright green) and lighter brown (NATO brown mixed with light brown).  I'm quite pleased with the final effect.

Thanks for looking.
Posted by Andy Canham at 09:16