Back at the start of the month, we organised a large game of Battlegroup Overlord, based on Scenario 7 from  the Rapid Fire D-day Supplement.  We pitted two British infantry companies from 2nd Shropshire Light Infantry, commanded by Steve H and I, plus a Sherman squadron from the Staffordshire Yeomanry, commanded by Will, against two companies of German infantry, commanded by Dennis and Ian, with support from 4 platoons from 1st Battalion Panzer Regiment 22.

The view south from Perriers Ridge (we marked the edge of the ridge with a line of low hills in the foreground), with the villages of Bieville on the left and Perriers on the right.  The low hills and woods around Lebisey are in the distance.  The British objectives were to clear the woodland and exit the far table edge en route to Caen, as well as prevent a German victory.  The Germans had to exit troops in good order off the British table edge, heading for the landing beaches, as well as prevent a British victory. 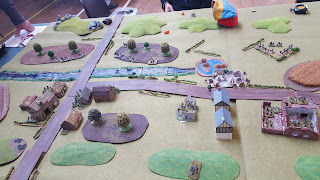 The view south from Perriers Ridge, but further west.  The hedges provide cover for infantry, but don't block line of sight.  I have a platoon in Perriers and the rest of my troops are coming on. 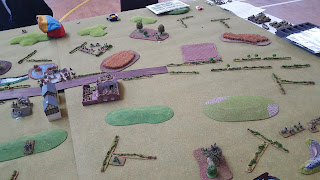 The road to Caen.  Steve has a platoon in the village and the rest are following up coming on table. 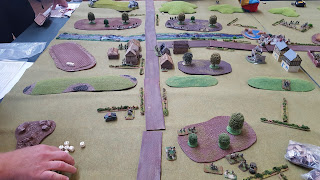 Anticipating an armoured counterattack, the British deploy their AT resources with a good view of the open ground in front of Perriers Ridge. 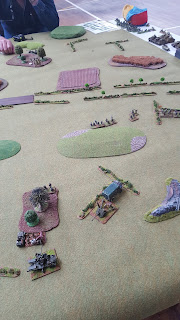 The British in Perriers consolidate their hold on the village and engage in a firefight with dug in Panzergrenadiers beyond the wheat field. 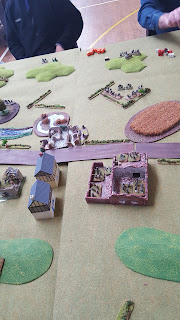 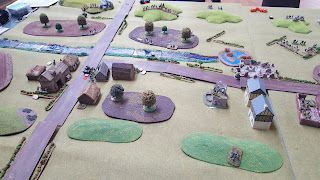 Accounts of the battle refer to a natural AT ditch, which we interpreted as a ravine with a stream, which is impassable to vehicles except on the road.﻿ 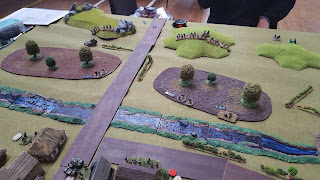 Ian's Panzergrenadiers and a dug-in 88mm AA gun, the target for a lot of suppressing hits from British artillery. 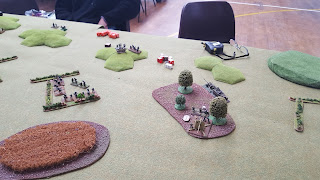 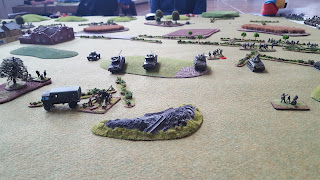 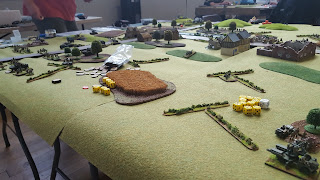 The British infantry and their artillery support dealt with the dug in German infantry around Lebisey, resulting in the remnants pulling back into the woods to avoid direct fire.  The British Sherman Squadron arrived just ahead of the German counter attack with the Panzer IVs advancing in alternating bounds firing from stationary.  At long range, tank fire was pretty ineffective, but resulted in a stand off with neither side wanting to close the range. 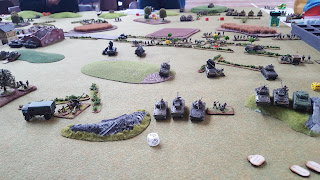 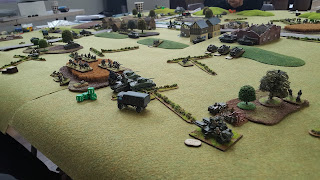 Infantry platoons continued to advance, drawing German mortar fire.  But a beyond the call of duty test resulted in a rifle section close assaulting the nearest Panzer IV and brewing it up.﻿ 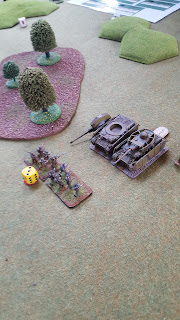 Lots more long range shooting while the infantry move to get to grips with the remnants of the Panzergrenadiers. 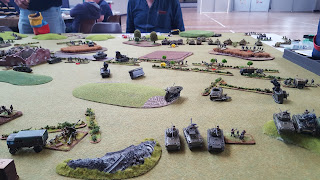 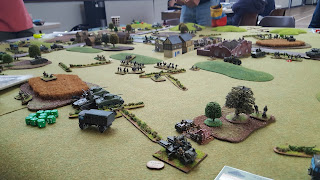 The final scenes on the battlefield littered with wrecked armoured vehicles.  Both sides had reached a standstill so both failed to achieve their objectives, resulting in a draw.﻿ 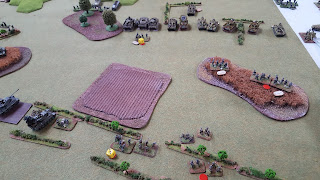 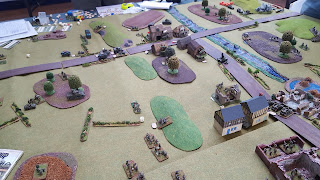 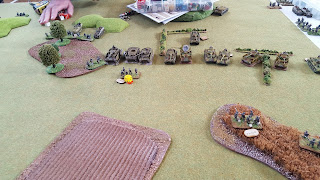 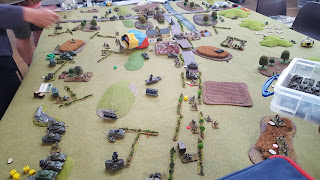 This was quite a large game, one of the biggest we have played so far using Battlegroup and it gave us some useful insights into allocation of orders dice and breakpoints for individual company-sized Kampfgruppes.  All in all a fun game, lots of twists and turns, leading to a suitably historical conclusion.
Posted by Andy Canham at 23:11