A couple of random games

I took these pictures to highlight the English Riflemen on the left flank (a small 6 figure unit) who took on the best part of a brigade of French infantry, including a large unit of Voltigeurs - and won.  They advanced to take up positions on the edge of the wood, shooting up an infantry column in flank.  In response, the French general decided to sweep them aside, but although shaken, the riflemen kept holding on or retiring, before rallying again.  Eventually, they shook and routed the Voltigeurs, which broke the French brigade due to losses elsewhere as well.  This shows the situation near the end of the game where they were swinging around to take another infantry battalion from the flank - tough guys these Riflemen. 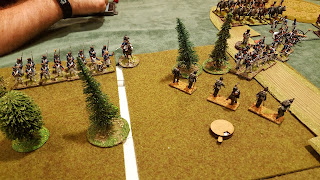 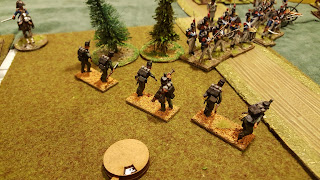 Then last week I played a game of Battlegroup Blitzkrieg at a new venue for me, the Wargamestore at Brimstage on the Wirral (http://www.wargamestore.com/).  They have a late gaming night on a Wednesday.

This game, set in 1940, saw the Germans deploy 2 motorized infantry platoons, 2 platoons of Pz 38ts, 1 platoon of Pz IIs and some recce against dug in British infantry supported by cruiser tanks and some Vickers light tanks. 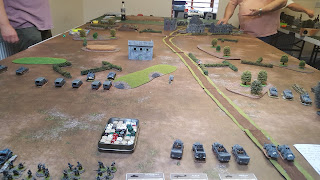 The British tried to use their Vickers tankettes to catch my PzIIs and infantry.  Using a reserve move and their 24 inch speed, they swept through the defences and around the trees, destroying a Panzer II.  The surviving PzIIs tried to take the Brits in the flank and failed to penetrate at all.  The infantry debussed and close assaulted the Vickers tankettes with ATMs, knocking onhe out for no loss.  In the following activation, the Vickers shot up the remaining Pz II and pulled back behind the wood. 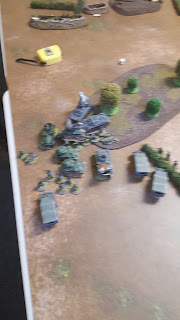 By the end of the evening, both sides had taken losses bringing them close to their break limits.  We called it a draw, which was pretty much a victory for the plucky Brits holding the line. 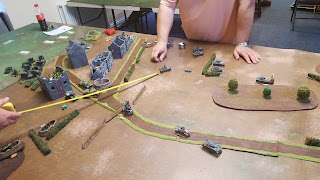 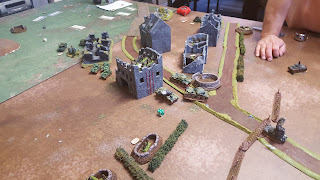 Two very good, fun games, with lots going on.  Sorry the pictures are a bit disjointed and sparse.

Thanks for looking.
Posted by Andy Canham at 17:23