Will and I tried out a test game of Battlegroup Market Garden at the club last night.  We chose up to 500 points following the battlegroup selection restrictions from the book.  Will had exactly 500 points of US paratroopers, which included a parachute infantry platoon with 57mm AT gun, a battery of 2 75mm pack howitzers, three recce jeeps with dismountable MMGs and a battery of off board 81mm mortars.  I went with an armoured recce infantry platoon from the Wacht am Rheine book with 75mm PAK, MG34 tripod and Panzerfaust supports, Sdkfz 250/9 recce, 2 Stug IIIGs and a resupply lorry.  We played the flank attack scenario.

This is the table layout, based on one from the Rapid-Fire Arnhem supplement.  The US deployed their recce top left and main force top right.  My German recce lower right and main force lower left.  We rolled 1 for weather, so thunder storms grounded all air support.  5 objectives were placed, one in the centre (on the hedge) one in the village on the German right and one in the open field on the German left.  There were two more in the woods on the right at the US end of the table and in the woods on the left at the US end.  The Germans were outscouted, so took a chit before we began.

Placement saw me, the Germans, with a Stug IIIG on my left plus the PAK 40 and platoon command 250/1, and the recce 250/9 on the road to the right of the village in the foreground.  Will brought on 3 recce jeeps on the German left and several units including his Pack howitzers and 57mm AT gun on the right, as well as some squads of infantry.  With the addition of his recce units, he won the dice-off and took first move.  He secured both objectives at his end of the table with recce jeeps and pushed his main force on table, although they remained bunched up (rear right below).  Cheekily, his 57mm moved a full move on table, up to the road and unlimbered, then took two shots at my poor defenceless 250/9, brewing it up.  So, by the end of the 1st US turn, I'd taken 1 chip for out scouted, 2 for objectives and one for the 250/9.  In my turn, I pushed a Stug IIIG forward to secure the objective in the field on my left.  The CO called in an 80mm mortar strike on the bunched up paratroopers on the right, killing a jeep tow for the howitzers, and unlimbered the PAK 40 on the edge of the woods on my left, so managed to make the paratroopers take 2 chits, one for loss of jeep and one for objective secured.

Turn 2 saw Will move some reserves on and moved his troops into position where he could do some spotting.  He dismounted his recce MMGs and moved the jeeps out of sight.  My turn saw me bring on the FHQ, and a 250/1 with MG34 team aboard from reserve.  The 250 trundled along the road into the village, sheltering behind a building and securing the objective, forcing another chit on Will.  My PAK and Stug went on ambush fire and the FHQ moved up to the edge of the woods, ready to take up a more covered position next turn (I hoped).  The platoon command called in more mortars, to little effect.

Turn 3 was very unkind, with Will plastering my troops with 75mm howitzer and 81mm mortar barrages, placing a pin on the FHQ, which was a blow.  In my turn I brought on a solitary 250/1 with MMG team from reserve.  The platoon CO called in fire which drifted wildly, straight on to the AT gun, causing some pins.  The 250/1 from reserve slipped around the back of the woods and debussed the MG team into the woods.  I also brought on a 250/10 and pushed that down the left flank (out of shot).  I didn't unpin the FHQ as I wanted to keep the chits until I really needed them. 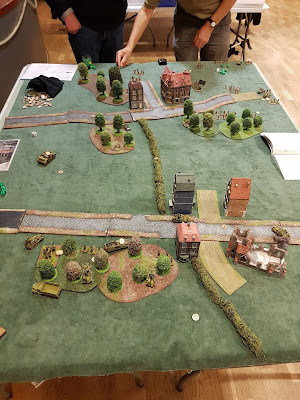 My troops trying to secure a firebase in the trees. 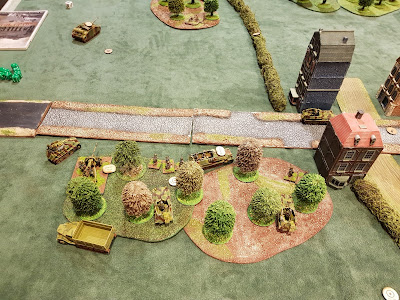 What had my 250/9 done to deserve this kind of treatment? 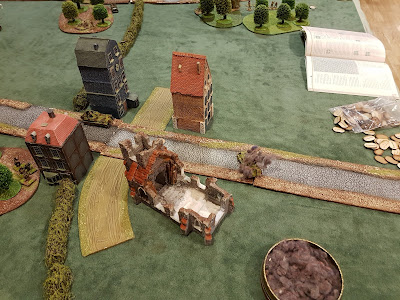 Those pesky Americans, overpaid, oversexed and now over here in Holland too.  Some pinned units around the AT gun in the foreground. 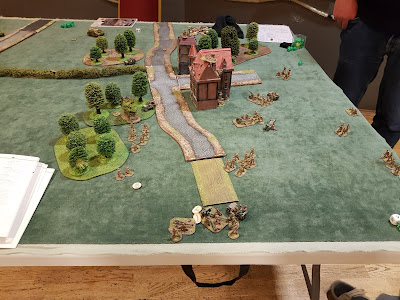 Next turn the US moved their infantry forward into the woods on my right and took some long range shots at one of my dismounted MG34 teams in the woods.  More artillery barrages rained down on the woods to the rear.  I had received a taste of what the US artillery could rain down, and didn't much care for it.  In the true German spirit of counterattack, I decided to use the armoured vehicles to get to grips with the paratroopers and pushed them forwards on the left, partly to free-up the Stug and partly to try and clear out the MMG in the wood.  Long range fire from the MG34 teams in the woods was enough to deal with the recce MMG in the woods.  Two 250/1s moved up to the hedge line to at least contest the objective in the hedgerow, with the recce jeep behind the woods pinned by their area fire.  The 250/10 barged into the woods coming up to close range of the pinned recce jeep.  In the town, my 250/1 debussed and the MG34 team entered the grey building. 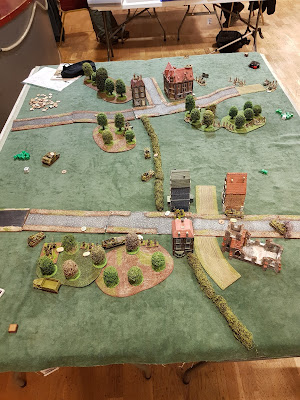 The paratroopers continued to call down all kinds of unpleasantness on my troops in the rear, causing lots of pins.  They also brought troops into the woods on my left at the back and right of centre.  This latter group pinned my MG34 team in the grey building.  I brought on the rest of my force, including the second Stug, an HMG team and my logistics truck.  The latter raced into cover in the village, while the second Stug moved up beside the first followed by the tripod MG34 team.  My mortars caused a pin on the recce MMG team in the woods on my right. 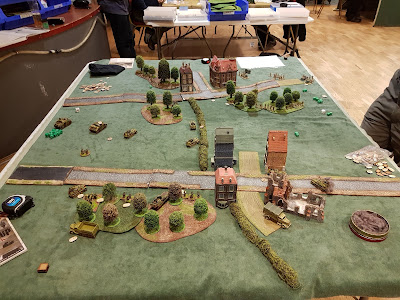 At the end of my turn, I removed some pin markers, taking one chit. 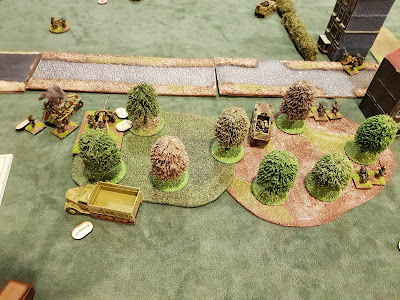 This was the crucial part of the game, so photo taking took a back seat.  The Stugs advanced, being very careful to stay out of sight of the 57mm which had a fire lane along the road.  They then used their pintle MGs to shoot up the US paratroopers in the woods (on the rear left in the photo below).  The 250/10 in the woods missed the jeep, which bugged out, and then added firepower to shooting up the infantry.  One of the 250/1s at the hedgeline shot at the US in the woods on the right, causing some pins, while the other went on ambush fire - Will was trying to sneak a bazooks team into the building at the edge of the village. 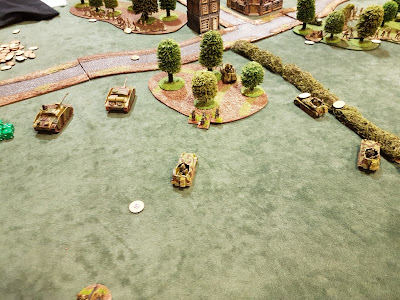 On the right, I used a reserve move to push a 250/1 forward to shoot up the woods.  I thought I had carefully placed him out of sight of the 57mm AT gun, but alas no, he suffered the same fate as the 250/9 at the start of the game.  By now, my battle rating counters were getting worrying. 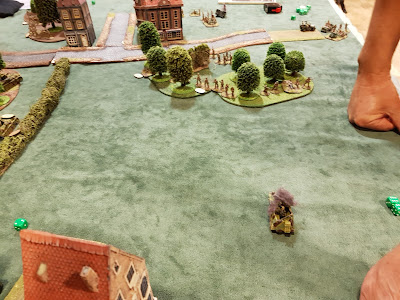 However, all that Stug firepower began to take effect, wiping out one of the squads in the woods on the left and the bazooka team, pinned with ambush area fire and then taken out with aimed fire.  The 250/1s by the hedge started to take area and aimed fire at the paras in the woods on the right.  My MG teams in the woods to my rear sidled sideways and took up positions in some of the buildings, while the team in the grey building exchanged fire with the paratroopers in the right woods.  US casualties are mounting (cluster of dead on the right table edge). 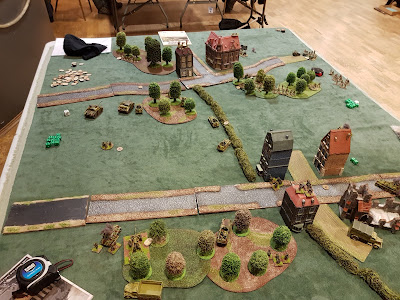 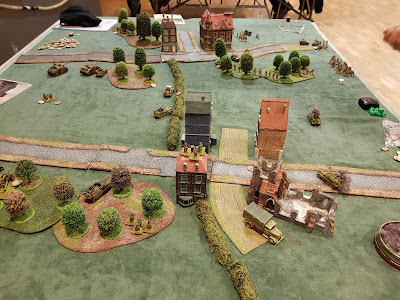 Payback from the Stugs, supported by a 250/1 and 250/10 and a debussed MG34 team.  Things were now looking much better for the Germans, lots of firepower available. 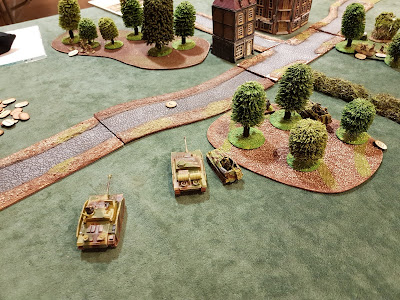 The spotter in the house continued to call in artillery and mortars, but with less effect on the more dispersed Germans. 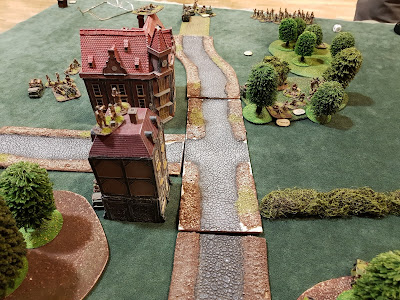 The German rear.  A major blow was the loss of the platoon command 250/1, plus the loss of 2 commanders and a stretcher bearer, losses which had contributed to the critical BP total for the Germans. 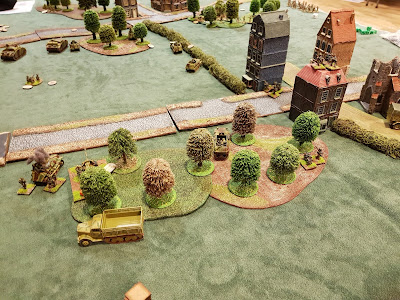 The game ended with the next German activation, when the Stugs eliminated the command team on the left and turned their guns on the spotter team in the house on the edge of the woods.  The next chit taken broke the US force by 2 points.  My Germans were 3 points away from breaking.

This was a really close fought battle, with no quarter offered from either side.  With their abundant recce, the Americans had it all their way in the first few turns, outscouting me, securing 2 objectives, destroying my recce and starting to rain mortars and howitzers onto me.  My initial plan to secure a fire base and then close with my armour turned out to need changing badly, thanks to the US artillery.  Once my troops started to disperse and move on the paratroopers on the left, things got easier as the effect of the artillery reduced and the massive firepower of the Stugs and 250/1s came into effect.  Wills 57mm gun was effectively isolated, despite good lanes of fire, because the Stugs didn't need to cross these fire lanes to shoot up the paratroopers.

This was a really intense, but fun game.  Lots of action, with some really interesting twists and turns.  At one point I thought the US were going to wipe the floor with me, but a bit of luck and some serious firepower saved the day.  The recce platoon is an interesting force and makes for some interesting gameplay.  How they might fare against Shermans from Guards Armoured is a different matter all together.