Last Thursday's game saw Ian and I play out a game of Richard C's unofficial Battlegroup Modern rules.  We decided to go for a 6mm scale and play a larger, attack-defence game.  The British took 840 points and the Soviets took 1100 or thereabouts.  I was surprised by Ian's choice of Battlegroup as he opted for a T-72 company supported by a platoon of infantry in BMPs and a Shilka.  My British comprised a mechanised platoon, dug in in trenches, supported by a Chieftain Mk11 troop, 2 dug in Milan firing posts,a Swingfire ATGM, Blowpipe team in Landrover, artillery spotter team in Landrover and, crucially as it turned out, 2 tubes of 81mm mortar support and two tubes of 155mm artillery support with one salvo of FASCAM.

This was the battlefield, laid out with a small village in the distance on the NATO right, and another in the foreground on NATOs left, within their defensive perimeter.  I deployed the Chieftains foreward, behind the small hill right of centre.  The infantry and a Milan teams were dug in on the edge of the village on the left and woods on the right of the pond.  A small reserve was also dug in around the farm complex on the right and woods in the immediate central foreground, with a Milan team dug in on the hill.

Neither of us brought recce, so neither was outscouted.  Soviets had the first move as they were attacking.  The Brits rolled 5 for their units on ambush, so 3 units, the 2 Milan teams and the FV438 Swingfire went on ambush. 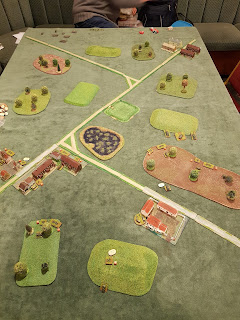 Ian used his battle drill to advance his T-72 company, less one platoon, cross-country down the British left flank at top speed.  The last T-72 platoon advanced slightly right of the main company, while the BMP platoon lurked behind the hill in the far distance on the centre of the table.  The dismounted spotter for the FV438 spotted one of the T-72 platoon tanks in the centre and brewed it up.

In the British turn, the artillery observer called in a FASCAM strike on the area between the two woods on the British left and the small hill, rolling normal accuracy and a deviation of 7 inches, landing right on top of the bunched up T-72s and the FHQ, also in a T-72.  Mortars hit the hill top in front of the BMP platoon, causing some pins.  The Chieftain troop took up hull down positions on the hill on the right and shot up the lone T-72 platoon, pinning another tank. 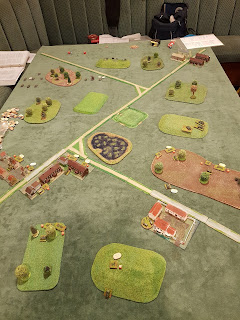 The centre of the FASCAM area marked by the spotter chit in the foreground.  This was effectively game over for Ian's Soviets. 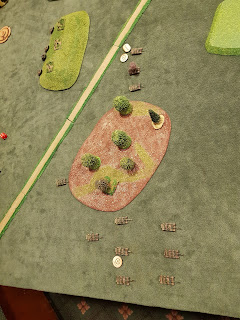 With the rest of the British orders in Turn 1, several infantry units on the British left went on ambush fire. 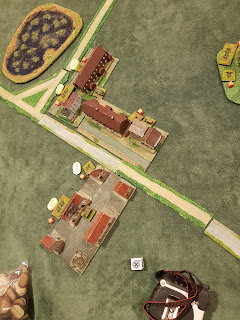 And on the right. 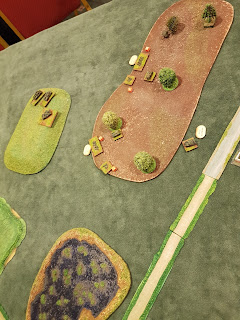 Ian then discovered that with d6+2 attacks from the FASCAM on top armour, any attempt to move resulted in a brew up.  Ian decided that the surviving tanks were effectively neutralised until some mine clearance vehicles could be call forward. 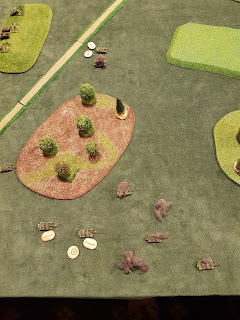 Ian gamely pushed his T-72 from the detached platoon, forward, only to make a great target for a Milan team, which promptly despatched it. 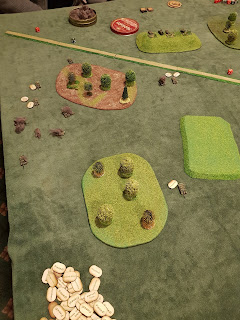 His BMPs did manage to immobilise the troop commanders Chieftain with a salvo of SA-4 ATGMs (top left in photo below). 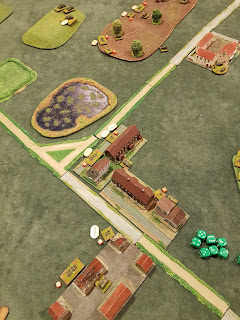 The situation near the end, with the BMPs in the far distance battered by 81mm mortar and 155mm artillery fire. 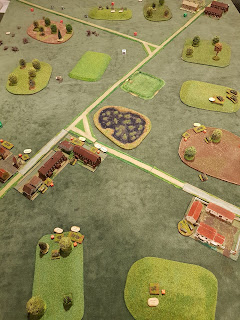 Ian did draw a helicopter chit and brought on a Hind E, catching my Blowpipe team unaware and not on ambush fire.  The Hind took out another Chieftain with ATGM fire, but was then hit by a Milan ATGM on ambush fire.  We were unsure how to resolve the attack, but it appeared the Milan team blew it out of the sky.

At this stage, snow was still coming down steadily, so we called an end to the game, even though the Soviets still had spare BPs, while the British had taken 3 points of damage.

Reflections on the game:
Ian's tactics of bunching up his T-72s and concentrating firepower turned out to be the wrong thing to do in the face of FASCAM.  With some lucky drift, the Brits plopped it down right on top of the whole company stopping it in its' tracks, literally dead if they tried to move.

We wondered if FASCAM was a little too powerful with d6+2 vs top armour.  We thought maybe d6+2 for the first turn after deployment and/or first turn entering the minefield, maybe falling to d3+2 or even d3 for further turns.  I'm not convinced, but it was a game changer for Ian.

Thanks for looking.
Posted by Andy Canham at 13:42