This weekend just gone, 18 keen Battlegroup players assembled for a linked series of games based around attempts by German battlegroups to cut Hells Highway during the Market Garden operation, coming up against determined opposition including British and US airborne and 30 Corps British armour and infantry.  Each game was based on 500 point forces and started with the recce screen scenario, followed by flank attack and ending with an attack-defence game for most, although the top German and British players for the weekend played each other using the hard road scenario.

So, here are the tables on Saturday morning as we laid them out the previous afternoon.  There were 10 in total and they run from just outside Eindhoven (Table 1 below), through to Arnhem (Table 10).

Hells Highway crossing one of the many canals in its path. 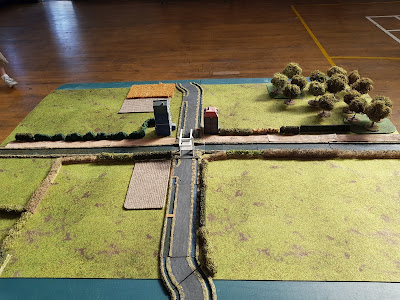 Hells Highway with a bridge crossing approached via a ribbon built up area amidst open farmland with woods in the distance. 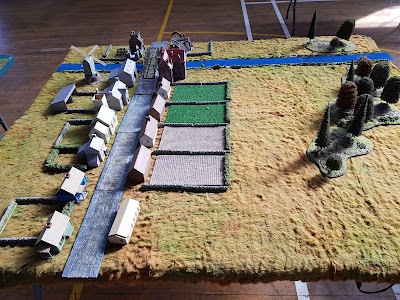 Another fairly open table, broken up by fields, with road causeway flanked by ditches. 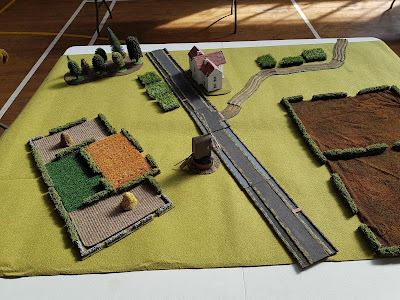 Hells Highway running on a ditched causeway, crossing a river. 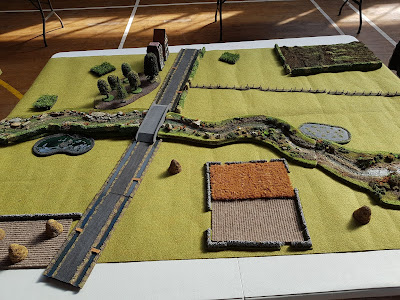 The town of Veghel, surrounded by canals. 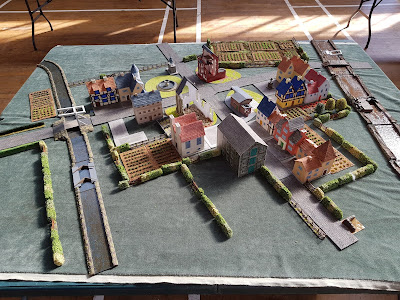 One of the US Airborne landing zones, with wrecked Waco glider. 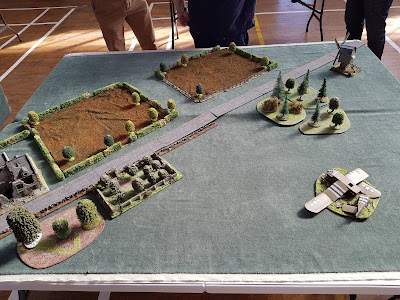 Detail of the glider wreck. 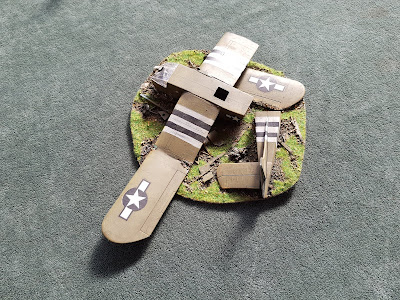 The hard road.  A crossroads set in marshland - not much opportunity to swing off the road here. 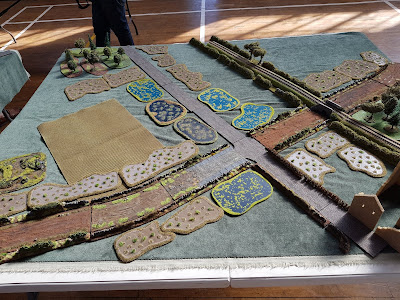 The Waal river and canal. 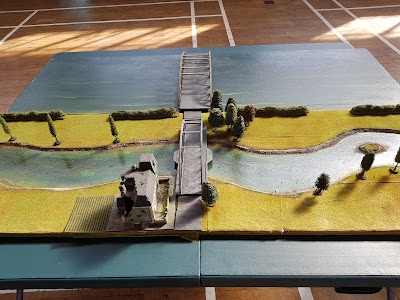 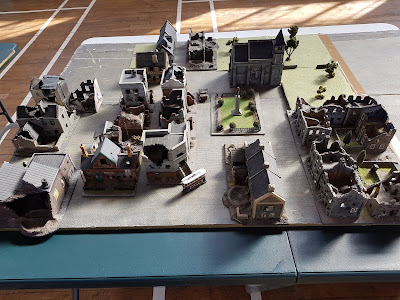 A wrecked tram on the deserted streets of Arnhem. 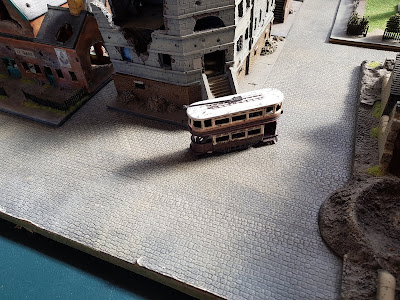 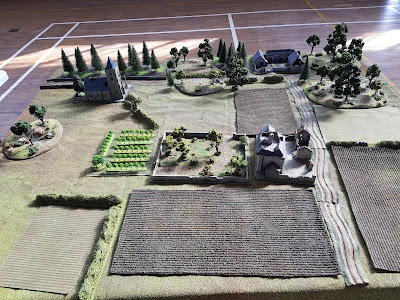 My first game on Saturday saw my 9th SS Armoured Recce platoon tasked with dealing with the British paratroopers believed to have landed in the area around Oosterbeek.  The game (recce screen) started with only a single Sdkfz 222 for the Germans and two British recce jeeps for a whole 5 turns.  The 222 headed down the road and swung around the farmhouse, keeping a watchful eye on one of the recce jeeps in the woods to the right of the picture below, while moving on the other recce jeep which had secured an objective in the farm orchard.  Bursts of 20mm autocannon did for the jeep and casualties on the crew caused them to break, heading for the rear. 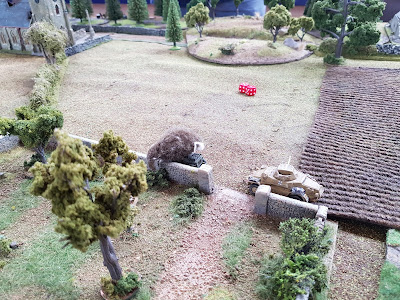 As the SS reserves began to arrive, the FHQ advanced to the farm and dismounted from their transport, which pushed on down the road to try and engage the other recce jeep in the woods to the right of the road. 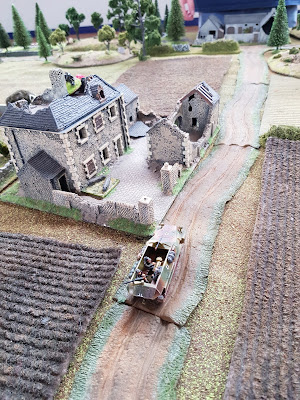 The British paratroopers, commanded by Ian, came on in the corner of the table behind the church and rapidly put troops into the church and woods behind, as well as pushing small units towards the wooded area to the left of the church.  Must importantly, he placed a 6pdr AT gun behind the wall to the right of the church and began to take pot shots at the Sdkfz 222.  The British AT gun failed to observe the 222 in several rounds of firing and when it did achieve a hit, managed to roll just about the only score that didn't pin, brew up or immobilise it, a 3 from 2d6. 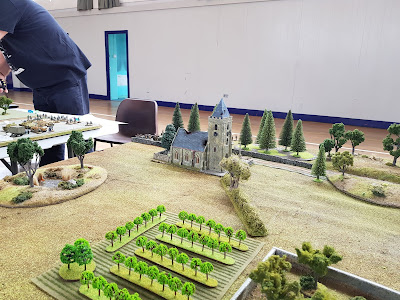 Very quickly, the German Stugs and Sdkfz 250s began to fan out, hemming the paratroopers into their corner of the table.  On the right, MG fire from the Stugs and the 251 command transport dealt with the recce jeep.  On the left, Stugs and a 250 advanced and secured the Orchard.  The FHQ in the farmhouse called down accurate 80mm mortar fire on the 6pdr AT gun and the paratrooper infantry sections pushing through the woods behind.  The mortars and some vicious 20mm autocannon shots from the 222 did for the AT gun crew. 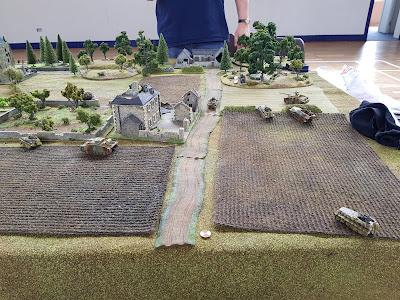 The loss of the second recce jeep and 6pdr, coupled with the need to unpin various units due to the German mortars, coupled with the loss of 2 objectives, meant that Ian's paratroopers were well on the way to their breakpoint when time was called.  For their part, the Germans had taken 2 chits, worth 5 points.  So, a decisive victory and the paratrooper defenders at the Arnhem bridge were not going to be reinforced today at least. 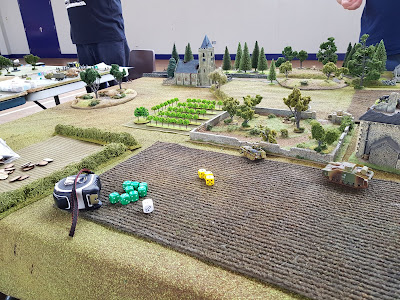 On other tables, the Germans managed to blow up one of the canal bridges just outside Eindhoven, thereby temporarily cutting Hells Highway. 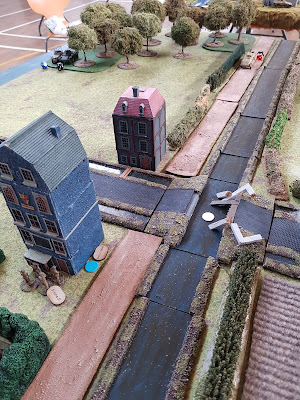 My second outing of the day was against Warwick's US glider infantry in Veghel.  This game turned out to be a very intense affair, resulting in me getting so embroiled in the game that I completely forgot about photographs.  Warwick's recce, including 2 jeeps and a section of Dutch terror fighters, quickly pushed into the outskirts of the town, occupying some key buildings.  In response, the SS recce Sdkfz 222 took up a position on the flank of town, commanding the objective by the canal bridge there and covering the area that Warwick had to cross to reinforce much of Veghel itself.  The SS FHQ took up a good observation position in a building on the edge of town and began calling in 80mm mortar fire.  Warwick reciprocated in kind with some nasty 105mm artillery, but his on table 75mm battery was dealt with by the 222 and mortars.  The Germans quickly built up reinforcements and filtered a mix of Stugs and MG34 teams in 250/1s into the town and around the flanks.  Losses mounted on both sides, with chits taken and handed out.  The German firepower began to tell though and glider infantry, as well as very robust terror fighters, were blasted out of buildings by combined Stug MG and 250/1 MG fire, while mortars rained down on infantry reserves and 222 autocanon fire attempted to sweep away squads on the left flank.  With just 2 points from breaking for the SS battlegroup, Warwick announced he had exceeded his and withdrew.  Phew, it was a close run thing.  I really regret not taking more pictures, as this was a humdinger.

So, by the end of Saturday, my dice had enjoyed an unprecedented run of success, and my SS battlegroup had seen off Ian's British paratroopers and Warwick's US glider infantry (the latter at considerable cost).  For Sunday's game, which would involve a deliberate attack on Hells Highway, I decided to rest the SS and allow them to lick their wounds, while I called up the big guns.  Sailors, hastily drafted from available manpower in coastal naval bases, albeit better trained than most due to anti-partisan activities.  They would be supported by Stugs scraped together on an ad hoc basis, but they had been allocated a timed barrage from some 105mm howitzers as well as a battery of dedicated heavy mortars.  A single sniper was also acting as a recce screen for the German force.

More on this shortly.
Posted by Andy Canham at 22:44