Sunday (Day 2) saw us playing only one game, for most of us a basic attack-defence scenario, although the top German player (Steve Hann) and British player (Ian Shaw) were assigned the Hard Road scenario on the table with roads lined by marshy areas, probably typical of the terrain around Elst on "the |Island" between Nijmegen and Arnhem, representing the final Allied effort to reach the bridge at Arnhem.  Again 500 points a side.  I was drawn to play Andy, who was fielding a battlegroup from 30 Corps, which seemed to consist of a motorised infantry platoon in half tracks, supported by a pair of Achilles tank destroyers, a Vickers MMG and some engineers, backed up by a battery of 25 lbrs.  For this game, I rested the SS armoured recce platoon, severely mauled by Warwick's US glider infantry the previous day, and turned instead to a platoon of sailors, which I upgraded to regulars.  These were supported by a sniper, 4 Stug IIIGs, an armoured assault pioneer squad in an Sdkfz 251/1 and an Sdkfz 251/16, backed up with a dedicated 120mm mortar battery, plus a times strike from a battery of 105mm howitzers. 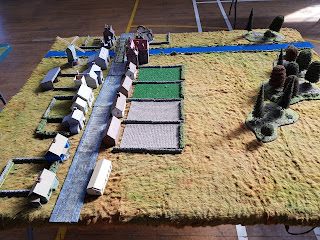 Our table was at the Eindhoven end of Hells Highway and comprised the road (Hells Highway), lined by buildings just to the rear of 30 Corps defence line and a canal on the German right (top of photo).  Andy rolled a 7 for on board deployment and put two Achilles between buildings facing the German table edge, the Vickers in a building on the extreme German left and assorted engineers and command elements in various buildings along the road and around the bridge.  On turn 1, my timed howitzer strike and mortars hit and pinned everything on the board bar the Vickers and some HQ units.  Unfortunately, my Stugs couldn't hit a thing.  Andy couldn't do a great deal, so lifted pin markers for two chits, although his pre-registered target in the woods pinned my sniper - he was to stay effectively pinned for most of the game.   Ambush fire from the other Achilles immobilised a Stug, but then the two Stugs replied and dealt with the Achilles, which burned, the other was pinned again.

Turn 3 saw German reserves rushing on in the form of the assault engineers and 251/16, as well as an arty spotter and some sailors.  The sailors advanced through the woods on the German right, while 120mm mortars pinned the remaining Achilles.  The assault engineers pushed their half tracks down the left flank, closing with the Vickers team.  The Stugs advanced to close the range with the other Achilles, while the heavy mortars pinned it.  The British replied with more 25lbr fire and a battery of 4.5" guns (I think that's what he rolled up), plus a timed Typhoon strike, but these only pinned the FHQ and sniper, again.  By turn 4, the 251 carrying the assault engineers was able to hose the Vickers team with MG fire, causing enough casualties for them to flee.  The Stugs opened up on the Achilles, which tried to reply with ineffective AP shots at the Stug using ambush fire - the British commander had to take a chit to unpin for the Achilles to fire.  German reserves came on including 2 Stugs with sailor tank riders, plus some supply train trucks.  Finally, in Turn 5, the Stugs were able to deal with the last Achilles, which left very little AT capability for the Brits.  The two assault pioneers Hannomags went on reserve move, while the 120mm mortars pounded the engineers in the buidlings around the bridge.  The British reserve half tracks also came on but there weren't enough orders to get them moving.  Next turn, the Germans issued a general advance with Stugs and sailors moving out on the right and the assault pioneers half tracks reserve moving up to within range of the remaining British engineers by the bridge.  The German artillery spotters moved the heavy mortars onto the reserve half tracks, pinning 1 and KO'ing another of them, while the 251/16 jetted flame to left and right, incinerating engineers in both buildings.  The British moved the last mobile half track forward and debussed a PIAT team and section, which occupied the nearest building, but only to have them incinerated by the 251/16, along with a handful of surviving British engineers, forcing enough chits to break the 30 Corps battlegroup.  Again, it was a hectic battle and I took very few pictures.

Here, towards the end of the game, sailors on foot and riding on Stugs advance towards the buildings around the canal bridge. 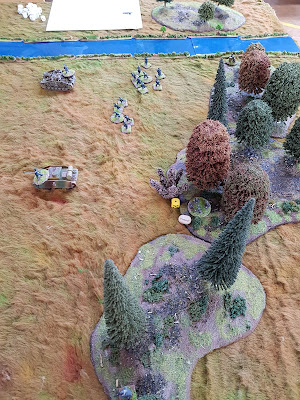 This view shows the 251/16 just in front of the bridge, which has sprayed fire to left and right, effectively neutralising the occupants of both the grey and red buildings.  The 251/1 with assault engineers waits slightly behind in case they are needed.  In the foreground a Stug waits on reserve move, to swing around and line up on the half tracks in the British rear (far left). 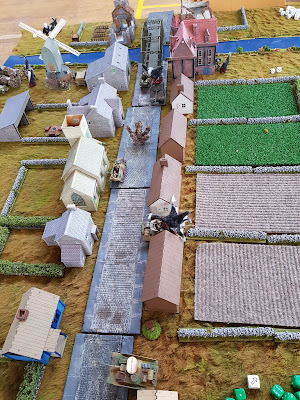 The engineers half tracks in more detail. 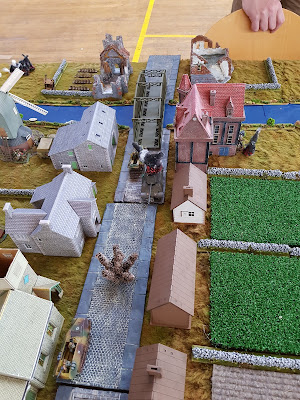 Mike was issued a King Tiger to augment his battlegroup.  It rolled forwards and destroyed a sniper team, before being brewed up by a 17pdr AT gun. 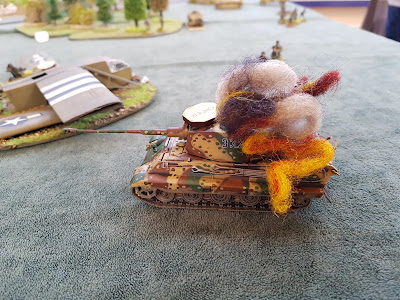 British paratroopers dug in with the blown up King Tiger in the foreground. 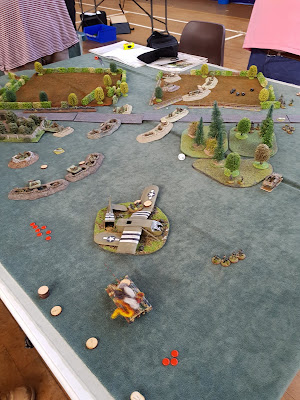 The hard road scenario saw bitter fighting between Ian's Shermans of 30 Corps and Steve's SS Stugs, with the Germans doing just enough to claim victory when time was called. 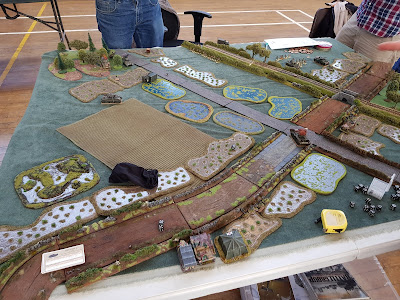 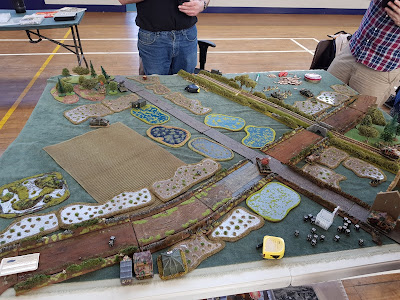 Will's US paratrooper forces very generously allocated the area on the right in this view for German deployment on the Veghel table.  The limited crossing points were never going to be easy. 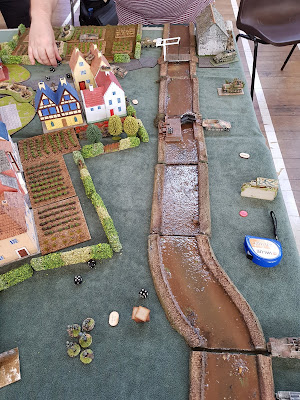 Will's US paratroopers dug in in the open spaces within Veghel. 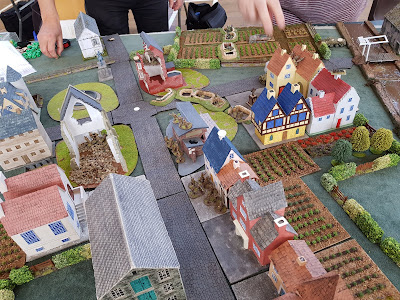 Germans advancing on another dug in Allied defence line, here supported by an FW 190. 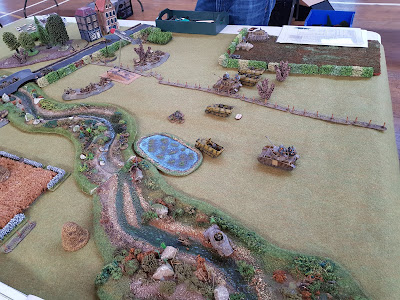 Dug in 30 Corps infantry supported by Shermans, being dealt with by a mixed German battlegroup. 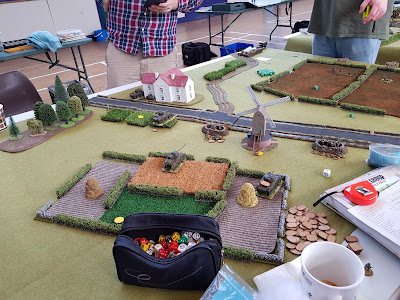 Sadly, I didn't take anywhere near enough shots of either the games I was involved in or some of the epic encounters on other tables.  The final tally saw the Germans secure enough points to call a victory, effectively cutting Hells Highway and putting the armoured spearhead of 30 Corps at risk of being surrounded and out of supplies.

It was a great weekend, all the players approached the game in a great spirit and took reversals of fate with a philosophical attitude.  There was very little gloating except when Mr Shaw suffered any reversal of fortune, and that was just the Allied players.  Roll on the next one.

Thanks for looking.
Posted by Andy Canham at 08:11