﻿
It's a Deeside Defenders games weekend.  We (Ian and I) had planned a big Sword Beach game incorporating airborne and beach landings plus the push for Caen, but we would have needed about 6 players.  In the event, Will joined us for the day, so, with three players we scaled the game back to 3rd British Divisions push for Caen by 185th Brigade and the counter attack by 21st Panzer.
The photo below shows the view of the table looking south with Perriers Ridge at the far end, the eastern table edge representing the Orne River and the outskirts of Caen in the foreground. 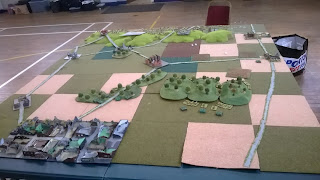 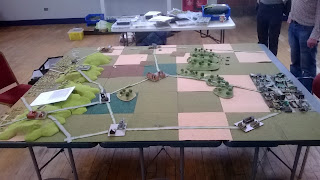 Looking north.  A parachute battalion started the game dug-in in Benouville, east of Perriers Ridge, with a company from II Battalion PzGren Regt 192 in Blaineville just beyond and the remainder of the battalion in Lebisey woods.  88mm AT gun assets were placed with the II Batt and in the outskirts of Caen along with Heer AA assets.  The game was scheduled to begin at 3pm game time with the three battalions of 185th Brigade, plus an attached Sherman regiment, entering the table using mobile deployment from north of Perriers Ridge (at the bottom of the photo). 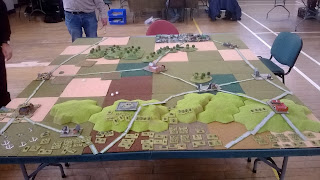 View along Perriers Ridge, looking west at the end of turn 3.  The British battalions have crossed Perriers Ridge and are approaching Lebisy Woods. 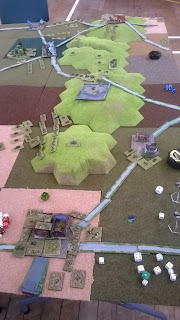 View looking south at the end of the third turn (3:45pm).  Elements of Kampfgruppe Oppeln are on table moving along the east bank of the Orne, while Kampfgruppe Rausch are partially on table in the suburbs of Caen. 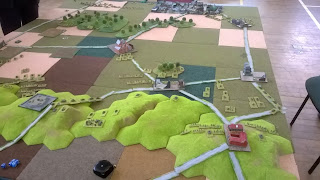 KG Rauch moving into Epron and the eastern edge of Lebisy woods. 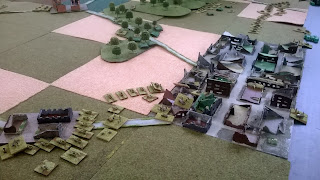 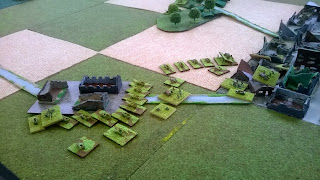 I and II Abt from PZ Regt 22 moving up behind Lebisy woods anchored on the Orne River to the east. 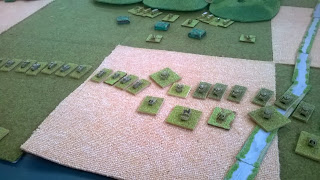 By move 6, the Germans had learned the power of British artillery and air support.  KG Rauch had lost most of its armoured transport to 105mm Priest artillery barrages, while I Abt of 22nd Panzer had been eliminated by repeated strikes by Naval artillery, Priest barrages and Typhoon strikes.  In the photo the void left by the demise of 22nd Panzer I Abt is to the east of Lebisy woods in the right mid-ground.  KG Rauch has been reduced to dismounted infantry hunkering down in Epron and Lebisy woods,  II Abt Pz Regt 22 and more Pz-grenadiers are moving up behind the woods.  In the distance, the British battalions on the German left and centre have both experienced some Hun hate in the form of concentrated 105mm and 150mm arty barrages, which have hurt the leg infantry quite badly, stalling their advance up to now. 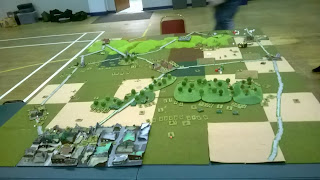 Looking east, the killing zone between Lebisy woods/Epron and Mathieu/Beuville where movement for both sides is currently a problem. 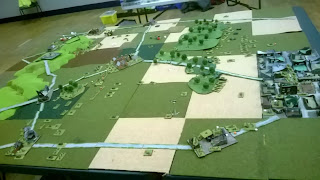 Looking south towards Caen in the distance. 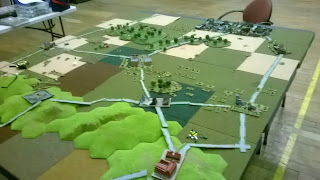 This is where we called it a day for Day 1.  Tomorrow will be an interesting contest between the might of British arty and air assets and the pluck of Jerry infantry trying to hold the stop line around Caen.  Interestingly, this is where the 21st Panzer did stop 3rd British Infantry Division historically, although they did manage to get a company of Pz-grenadiers onto the beach before pulling back to Epron at the end of the day.

All in all a fun days play with some interesting thoughts and experiences, particularly the frustrations of getting moving for the British and the devastating effect of British arty for the Germans.  Thanks to Ian and Will for a great game.

Thanks for looking.
Posted by Andy Canham at 20:39