Day two of our games weekend dawned to a typical foggy November morning.  We got on with the action, which largely consisted of the various elements of 21st Panzer hunkering down in any suitable obscuring terrain (mainly Lebisey woods and the outskirts of Caen and Epron), while the British artillery (both Naval and Field) and Typhoons plastered anything in the open.  II Abt of PzRegt 22 lost a couple of PzIVs and Somua S35s to this, but they mainly made it into the woods and took up positions on the northern edge of the woods.  The Pz-pioneers eventually debussed at the edge of the Caen BUA and deployed along the edge of town, with 88mm Heer Flak assets in support.  The 21st Panzer FAOs called down battalion barrages on anything that looked like a concentration of infantry and any armour they could include in the beaten zone.  A recce Stuart stand tried to locate infantry in the woods, but was close assaulted by a pioneer and panzergrenadiers, becoming a casualty.

We called it a day in the early afternoon, having reached c. 6pm in game time, with the 21st Panzer firmly establishing a stopline in Lebisey woods and the edge of Caen and still contesting Epron and Blainville, both of which, especially Blainville, remained vulnerable to British advances, although probably at a high cost.  In the end we agreed that the British and German artillery, while unpleasant to be on the receiving end, was probably pretty realistic.  We thought the use of air power was probably too effective and discussed possibly allowing a random sortie to be available on a random basis, say a 50% chance, but still needing to be called in as usual.  We also felt that the game would have benefited from a wider table layout to allow more room for 21st Panzer to sidestep the advancing British, as they did in the actual battle.  We also considered using a more random appearance for the British (e.g. 6 on D6 on turn 1, 5 or 6 on D6 on turn 2, etc.) and German (6 on d6 on turn 3, etc) off table forces, to simulate delays getting off the beach for the British and Allied airforce interdiction delaying the Germans.

All in all a really enjoyable game with quite a nice flavour for the period.

The British infantry suffering the effects of suppression from artillery as they advance between Mathieu and Epron.  Losses were particularly high in infantry and supports in this area. 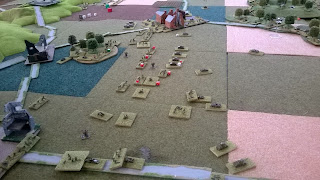 Epron and Caen to the right with Lebisey woods in the centre background/. 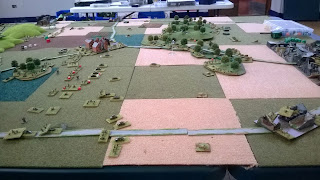 Looking north showing 21st Panzer deployed in Lebisey woods and Epron, with one stand surviving in  Blainville (to the right and behind Lebisey woods). 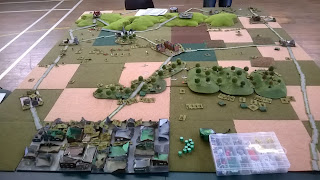 21st Panzer troops at the edge of Lebisey woods and the stalled British advance beneath Perriers Ridge. 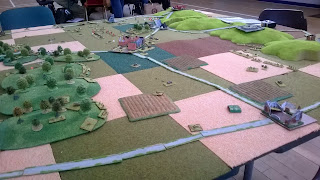 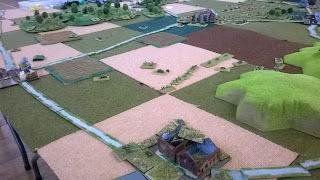 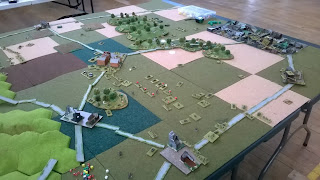 Thanks for looking.
Posted by Andy Canham at 17:49