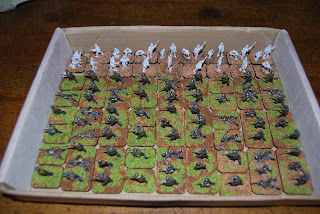 I've not been up to much this week with family visiting at the start of the week and a trip to hospital to remove a foreign body from my eye mid-week - I have no idea how it got there!  Since then my vision has been a bit blurry while I've been using antibiotic ointment, so not much point in trying to paint anything.

So, for want of anything more positive to share, here's a picture of the current status of my Fallschirmjaeger Brigade for Rapid-Fire.  I've so far completed the jaegers for three companies for each of the three battalions.  The back row are undercoated command figures, six for each of the battalion commands, plus 6 figures for the brigade command and a two man artillery observer team.  The regular jaegers are Airfix, while the command figures are from SHQ with a few Airfix figures.  I've still got SHQ MG and mortar teams, plus some engineer figures to complete, plus three Zvezda Pak 36 AT guns - I haven't decided whether to modify the regular infantry Zvezda crew or modify some Airfix infantry to act as crewmen.

I did manage a brief game of Flames of War on Thursday night.  My US paratroopers were taken aback by a pair of SS flamethrower half tracks, cunningly disguised as regular half tracks, which allowed the SS to seize an objective and hold it.  Still think it's a good game, but has very little to do with WW2 other than some really nice models.

Hope to be back to normal soon.  Thanks for looking.