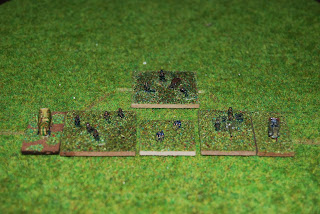 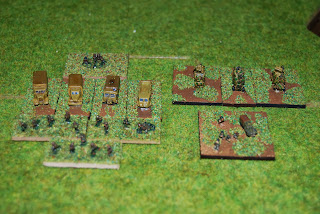 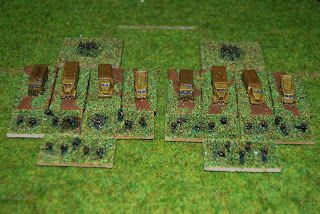 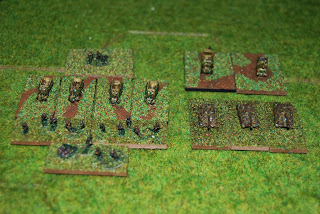 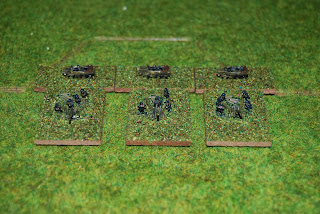 Stug-Abt 200, in centre HQ with Lorraine half-track, with 2 stands of 2cm Flak 38 on U304s behind, surrounded by 5 Kos, each comprising a 10.5cm Lorraine SPG, a 7.5cm Pak40 on S307 and a Pzbeobacht Lorraine FAO.  Unfortunately, I seem to have forgotten the 2 stands of pioneers in S303s that should go with the HQ. 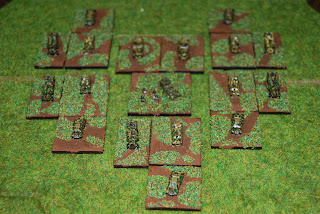 So, that should be it for the three KGs as they appeared on D-day, assuming I finish a couple of pioneer stands plus transports for Stug-Abt 200.  For completeness, I've yet to finish off Pz Aufklarungs Abt 21, but they only became available to von Luck late in the day of D-day.  More importantly, I need to put together the six stands of Pak43/41s for Pz-jaeger Abt 200 for defending the approaches to Caen, the SP Flak 38s and Flak 41s for Heer Flak Abt 305 and a R-Vielfachwerfer on S307 for 10 Werfer Batterie of Pz Artillerie Regt 155.

I'm not aware of anyone making a Vielfachwerfer, so might have to cannibalise a Katyusha rocket launcher to mount on a S307 half track.  Alternatively, I might just use a Reihenwerfer vehicle as it would historically provide KG von Luck with off-table fire support.

I think these should be able to keep the paratroopers at Ranville busy for a day or tow.
Posted by Andy Canham at 22:13