Last Thursday was the last club night before Easter and an enforced break due to electrical rewiring due to take place this week.  Rick had organised a Saga tournament, so 8 of us took part, each of us playing three games during the course of the evening.  My Anglo-Danes Christmas present is still in the original wrappings, so Luke very kindly lent me his.

As luck would have it, Luke was my first opponent, so his Irish warband faced his own Anglo-Danes under my control.  We played the escort scenario with my ADs trying to cross the board with three carts.  The ADs advanced rapidly to get to grips with the Irish, with the carts following up closely.  In the ensuing fighting, fortunes swung both ways, with the ADs killing the Irish warlord early on, only to lose their own soon after.  In a series of skirmishes, the ADs were whittled down to just one unit of three warriors, although the Irish also suffered.  Fortunately, my carts were able to make a sprint for the board edge in the last turn getting two safe and one almost at the board edge for a win, albeit at great cost in manpower.

Next up was Pete with his Jomsvikings and a clash of warlords scenario.  I tried to screen his warriors with a unit of AD warriors while my warlord with two units of hearthguard and another warrior unit went after Pete's warlord.  Unfortunately, my poor dice throwing led to some losses among the hearthguard, although overall losses were pretty even.  When time ran out, the figure tally was similar, but I had lost one more hearthguard than Pete who lost one more warrior, leaving Pete the winner by a single point.  Boo, hiss.  Still, I'd learned to isolate the enemy warlord with retainers, before moving in with my own warlord to deliver the death blow.

My warriors screening the right flank in front of the building.  On the left, two units of hearthguard and a unit of warriors with the warlord confront the Jomsviking warlord. 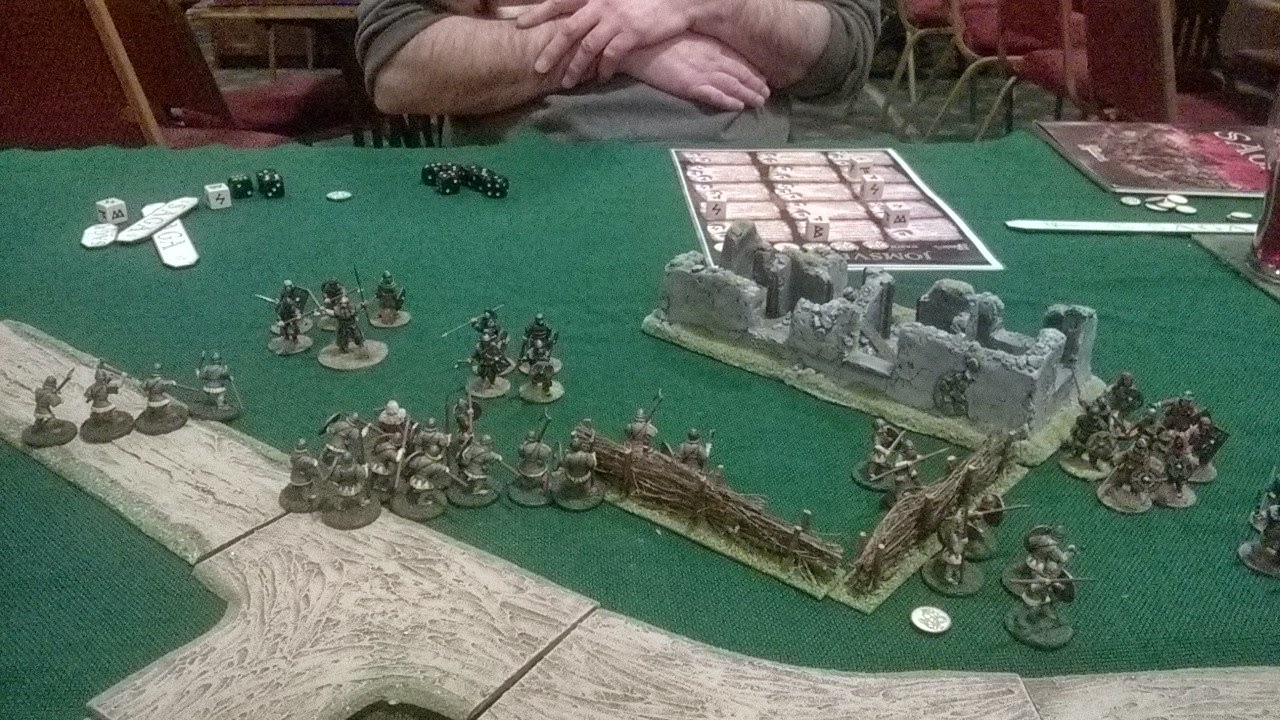 The third game was against Ian's Vikings.  Again the scenario was clash or warlords.  On deployment, I spotted that Ian had placed his warlord in the angle of a hedge line with his retainers strung out along the hedges, hoping to benefit from better saves when being attacked across the hedge.  As I tried against Pete, I screened the left flank with a unit of warriors and went hell for leather at the Viking warlord with two units of hearthguard and the warlord with a unit of warriors.  The first turn of combat whittled down the hearthguards on either side of the Viking warlord with my hearthguard generally coming off worse.  In the next round of fighting, my warlord and warriors again attacked the Viking warlord, this time using the Lords of Battle to enhance the number of attack dice.  Results paid off with too many casualties for the Viking warlord to shrug off and he went down amidst a series of spear thrusts and sword thrusts.

The final scene with the Viking warlord lying dead in the angle of the hedge. 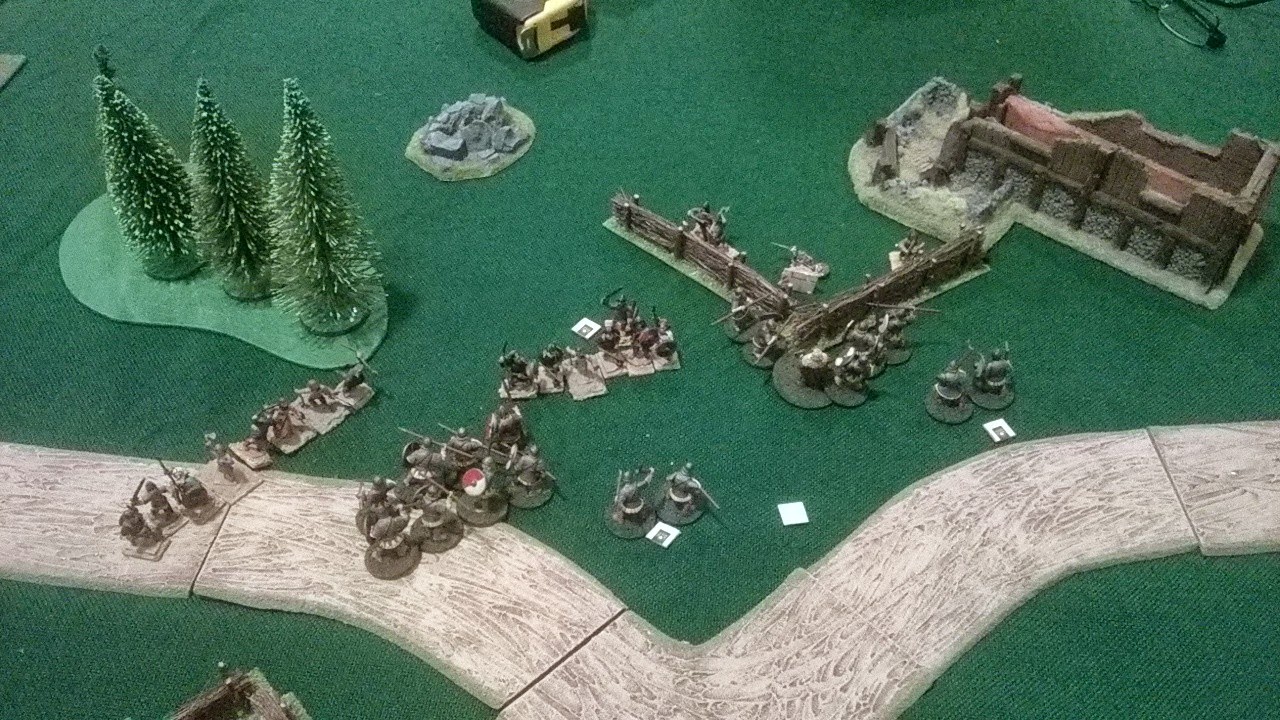 I was so chuffed with myself I had to take a close up! 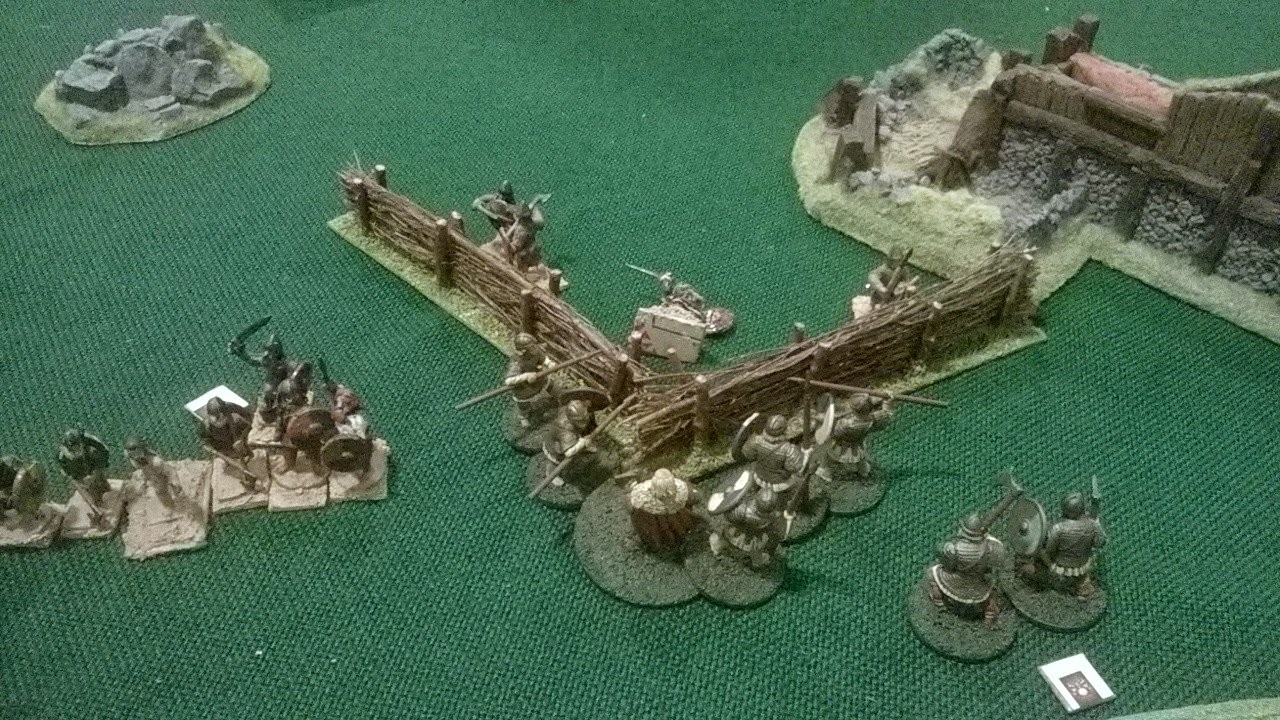 All in all a great night.  Saga is a fun game and everyone seemed to enjoy themselves.  A big thank you to Rick for the organisation and to Luke for the loan of his Anglo-Danes.  Also a big thanks to Luke, Pete and Ian for providing such fun opponents, especially Luke who kept smiling even when his own Anglo-Danes got the upper hand, despite being nearly slaughtered to a man.

A link to Rick's tournament page with loads of pics and a nice summary.

Thanks for looking
Posted by Andy Canham at 23:29