I've not been as active of late as I've spent some time preparing for and then attending Crisis Point 2015 over in Dungworth near Sheffield.  Friday evening, Richard and Jamie Crawley, Richard Phillips, Ian Shaw and I helped to set up the terrain, before adjourning to the Royal for a steak and oyster pie in honour of Chris Justice.  The game was going to involve various factions fighting over the ruins of the fictional Black Sea country of Andreivia, using Arc of Fire rules and 20mm troops of various origins.

The old Turkish Quarter of Tcherbevan, the capital city. 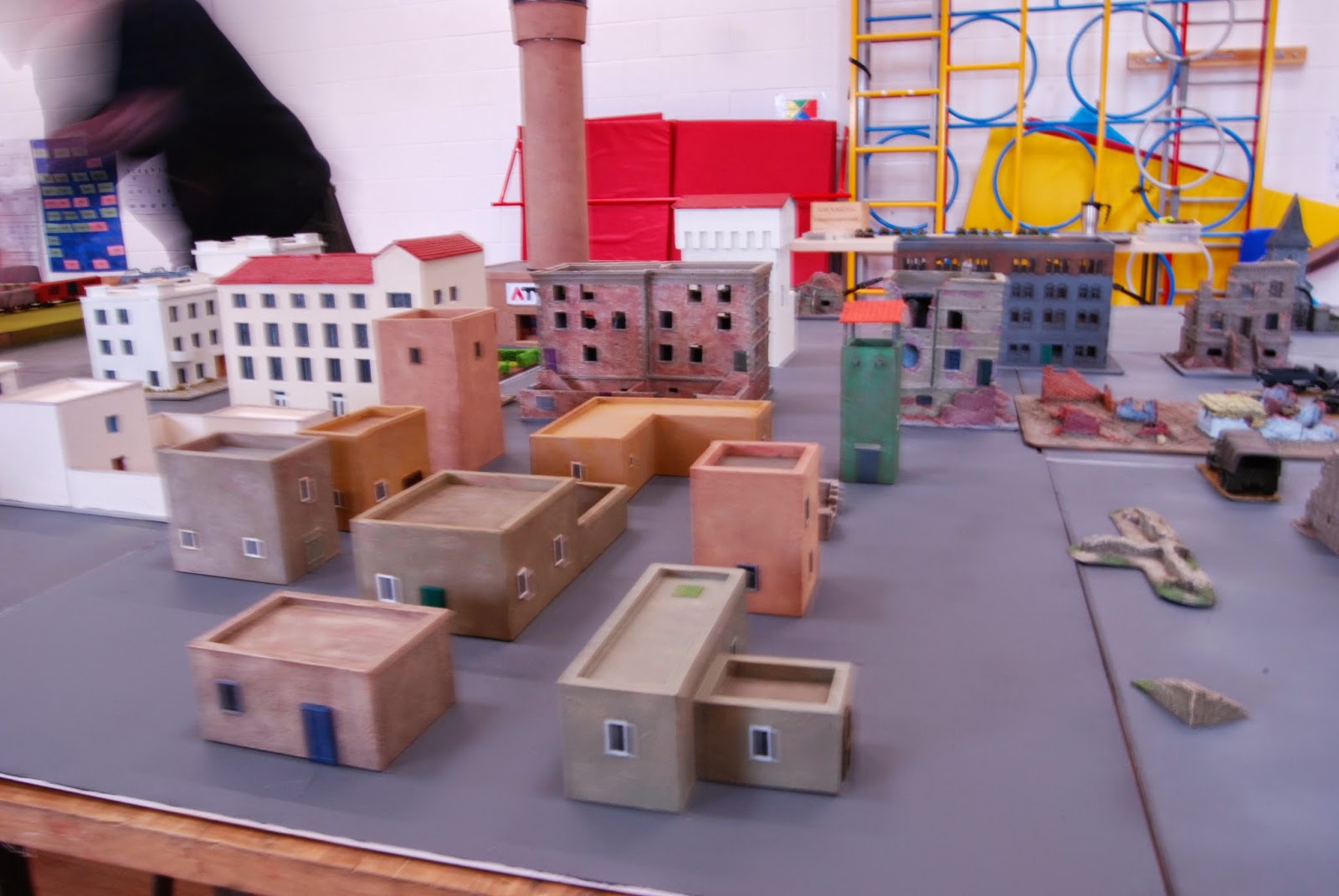 Another view of the Turkish quarter with the Andreivian TV tower in the background.  Richard P making last minute adjustments to the terrain. 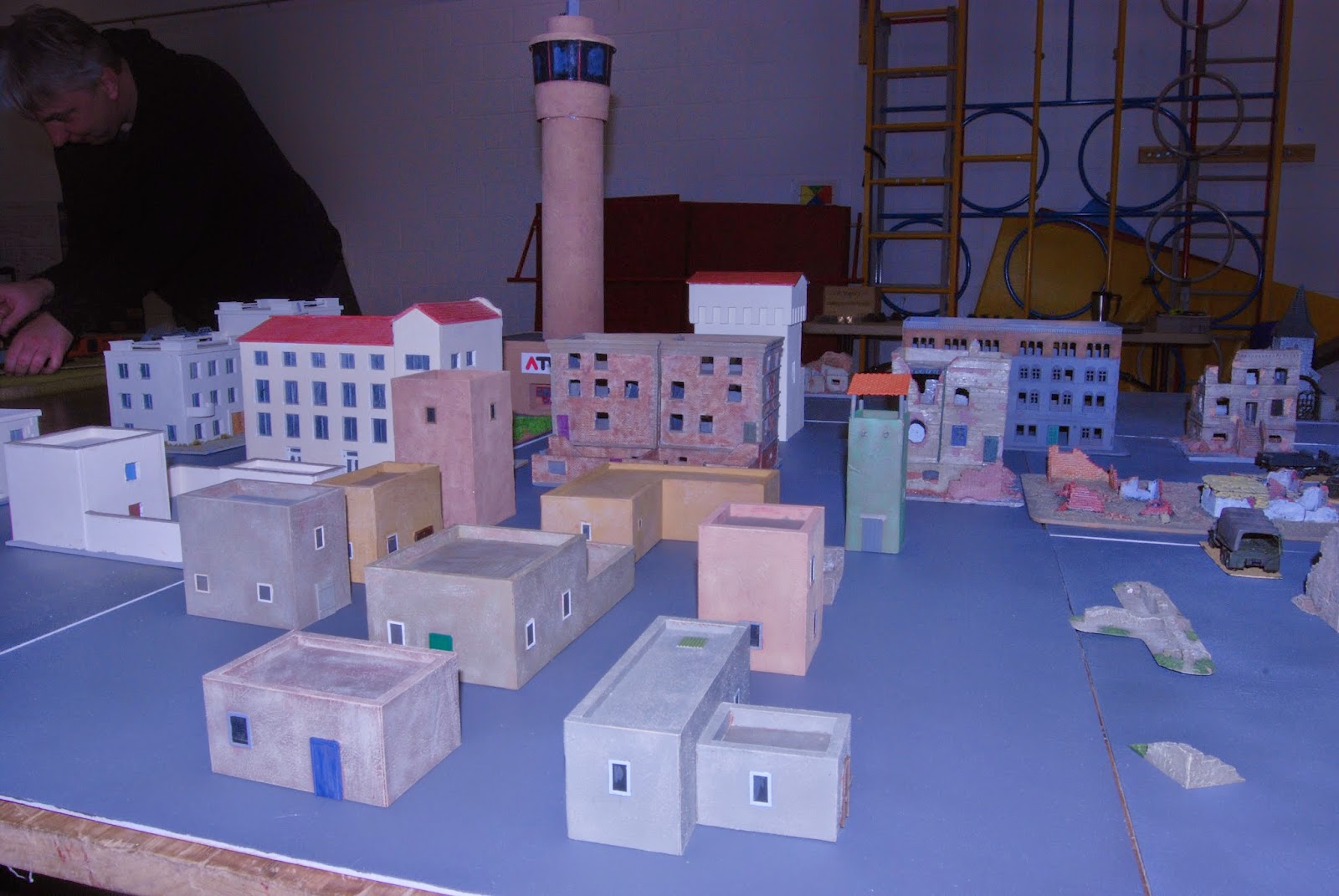 Looking at the Turkish quarter from the Armenian quarter, no love lost between these two factions, except when the troops of the usurper Andreivian Government are around.  Ian Shaw lurking in the shadows. 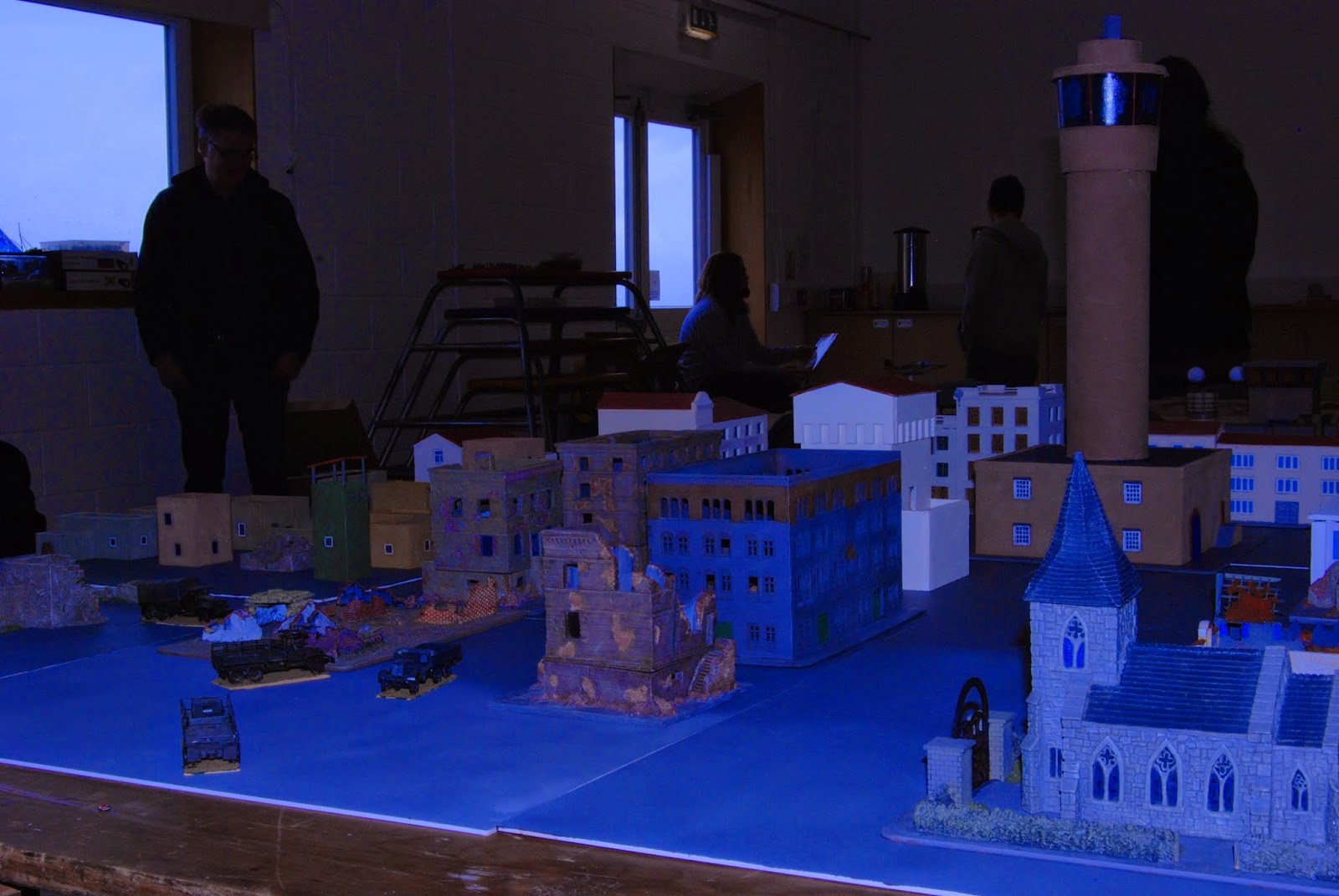 White government buildings in the foreground, across the Krupnehr River, with the Armenian (left) and Turkish (right) quarters in the gloom beyond. 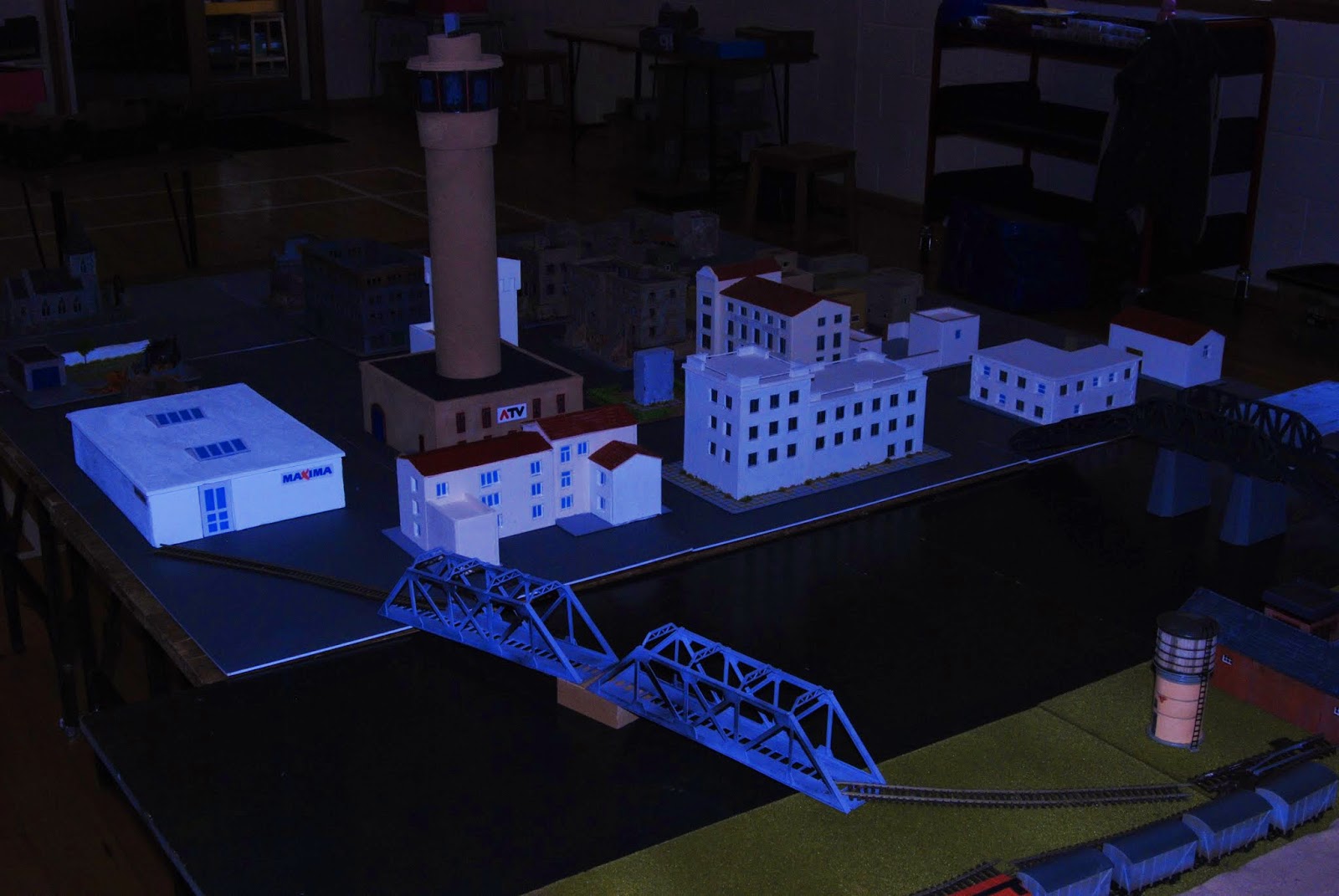 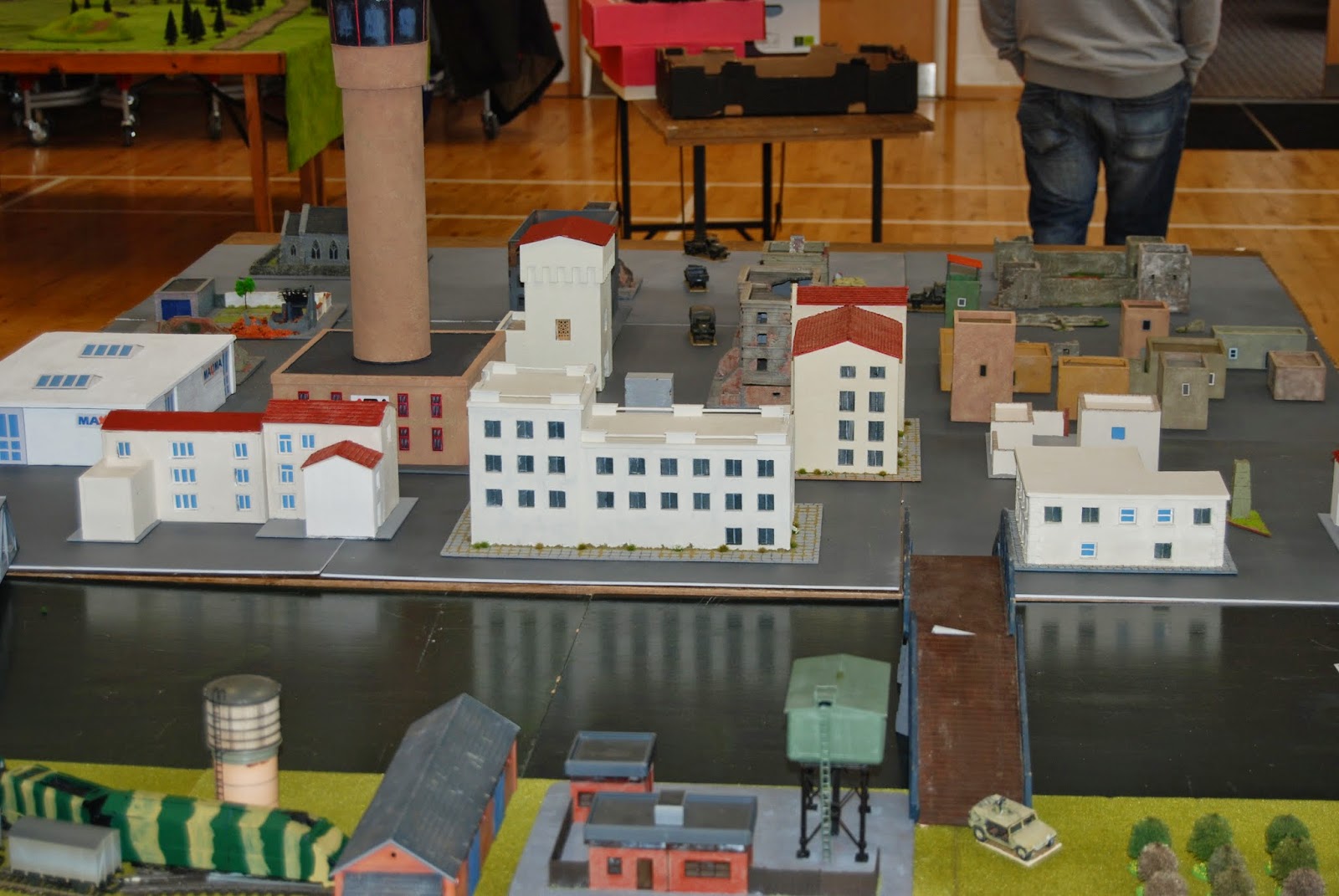 Day 1.  The Turkish faction deploy two 8 man sections of militia, each of 6 men armed with AK47s, one PKM LMG and an RPG.  These were supported by a three man medium mortar team and a three man Dushka team.  The Turks also deployed two squads of trained militia, armed as the militia, although one unit also had a female sniper/assassin, armed with a Dragonov.  These trained militia also deployed a 4 man command team with leader, stinger AA launcher and two AK47s, plus a 2 man AT-4 ATGM team.  The militia occupied the ruins just beyond and right of the tower with orange roof, while the trained militia occupied the stone houses beyond and left of the orange roofed tower. 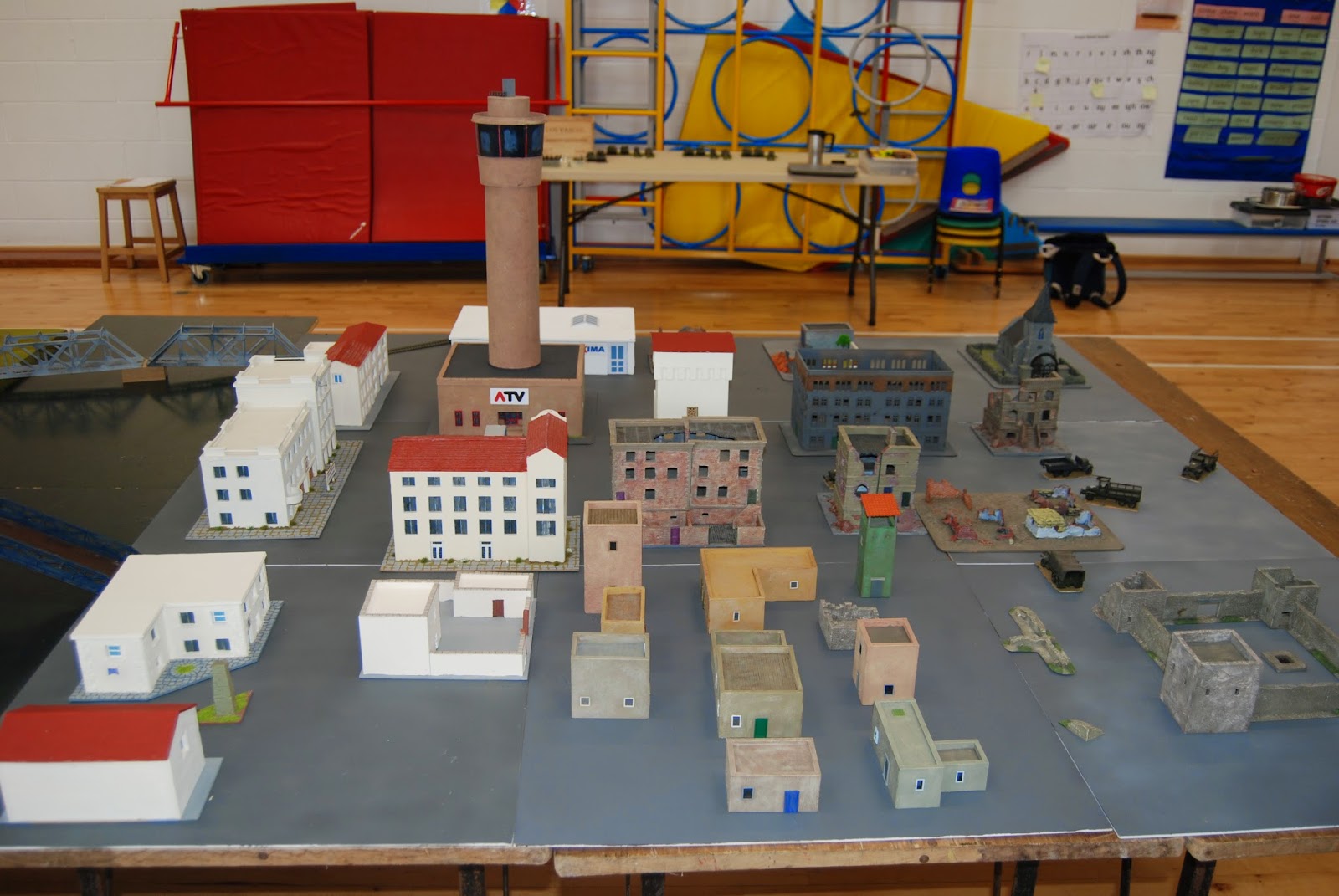 The militia can be seen in the ruins.  Their mortar team is in the ruins in the foreground and the Dushka on the roof of the stone building to the left of the ruins.  All the fighting on day 1 was to take place in a bitter struggle to dominate the fire fight across the Ministry of Culture Boulevard, running right to left between the ruins and the large grey building beyond. 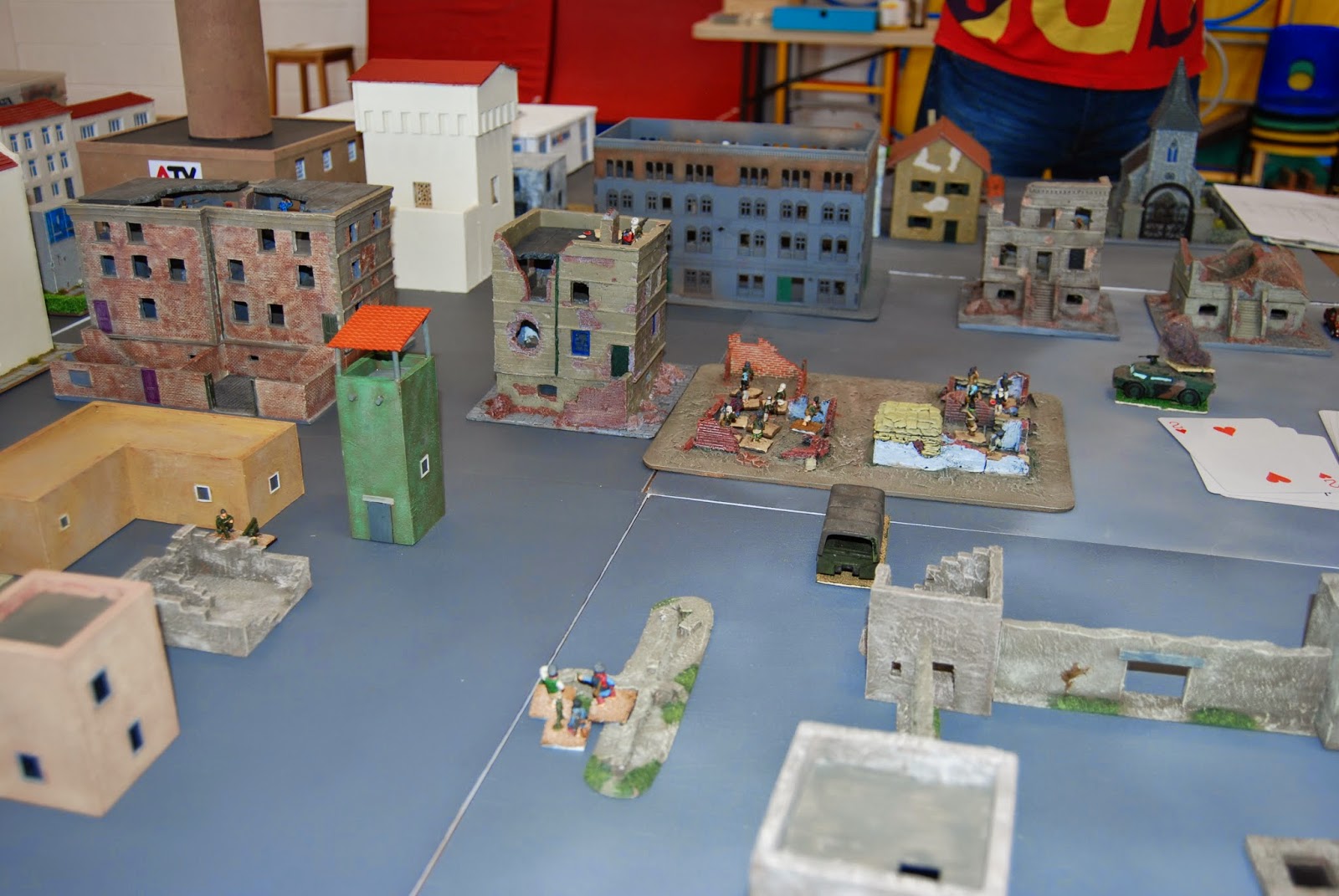 The militia - despite taking losses, these guys were able to dominte the fire fight with the aid of the rooftop Dushka on their left, allowing them to decimate and eventually break the Armenian squad lurking in the basement of the building in the right background. 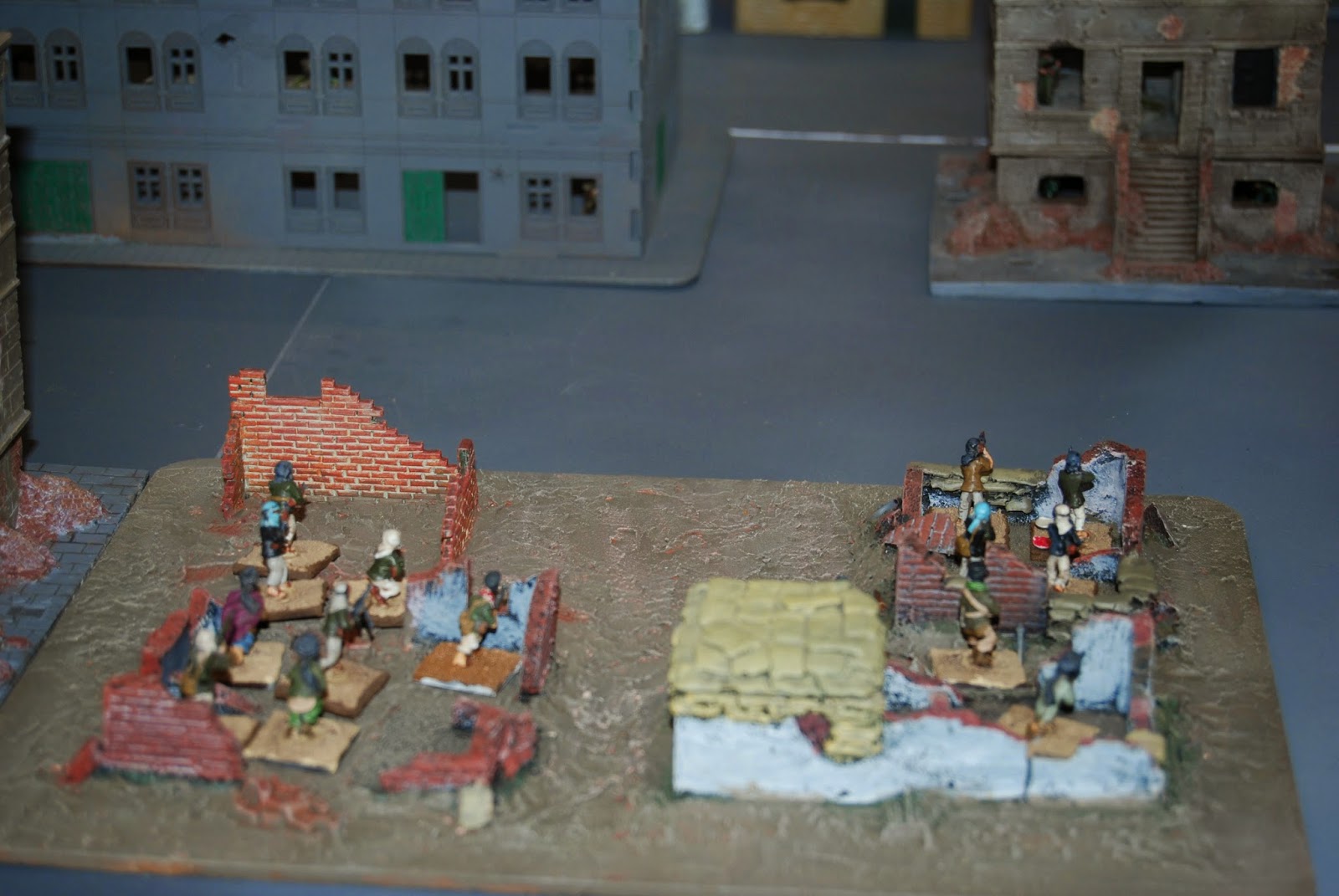 The Ministry of Culture Boulevard - not a good place to take a stroll on day 1. 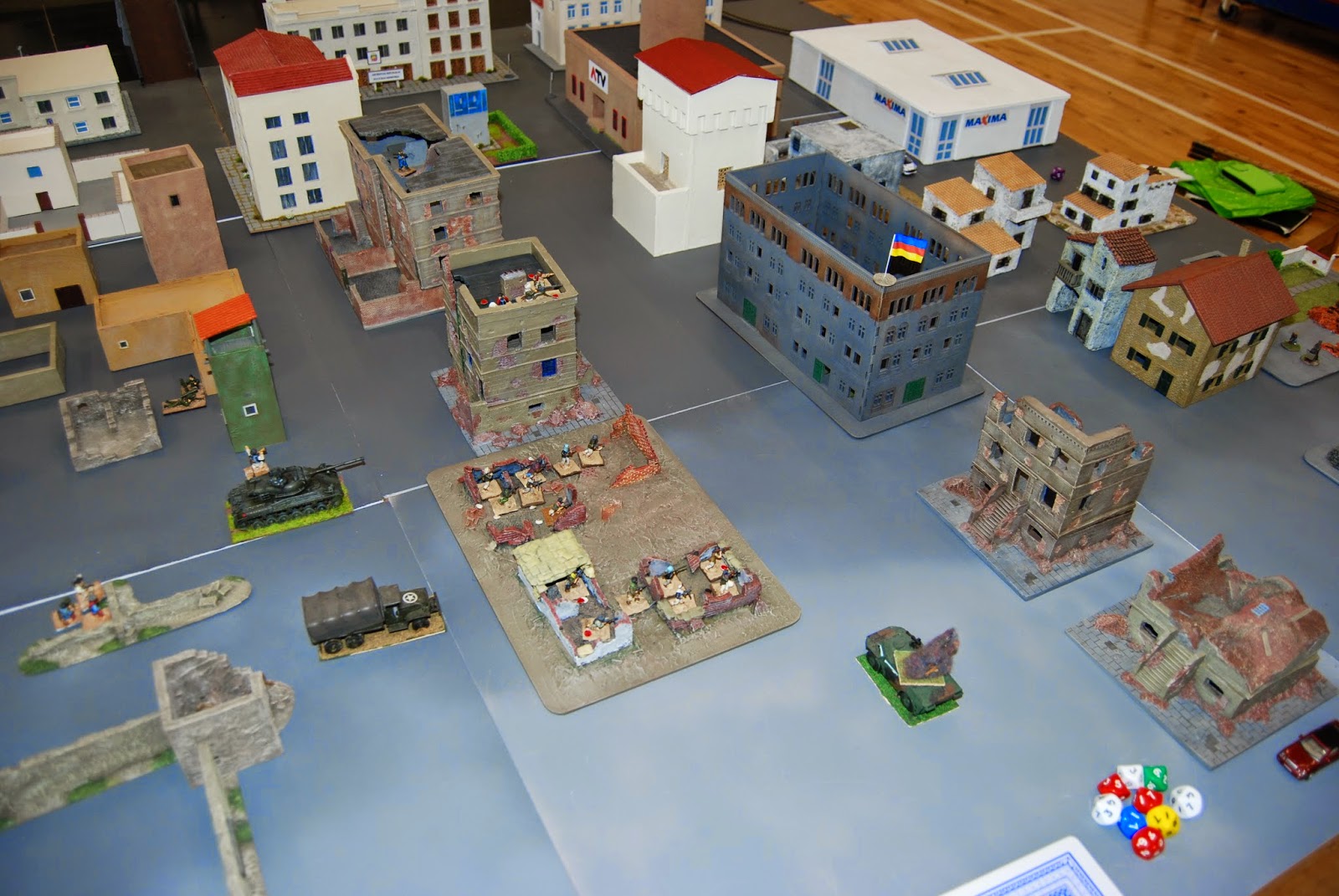 Late in the day, a type 61 tank from Japan, liberated from the Andrevian puppet government serves to add some much needed muscle to the Turkish advance. 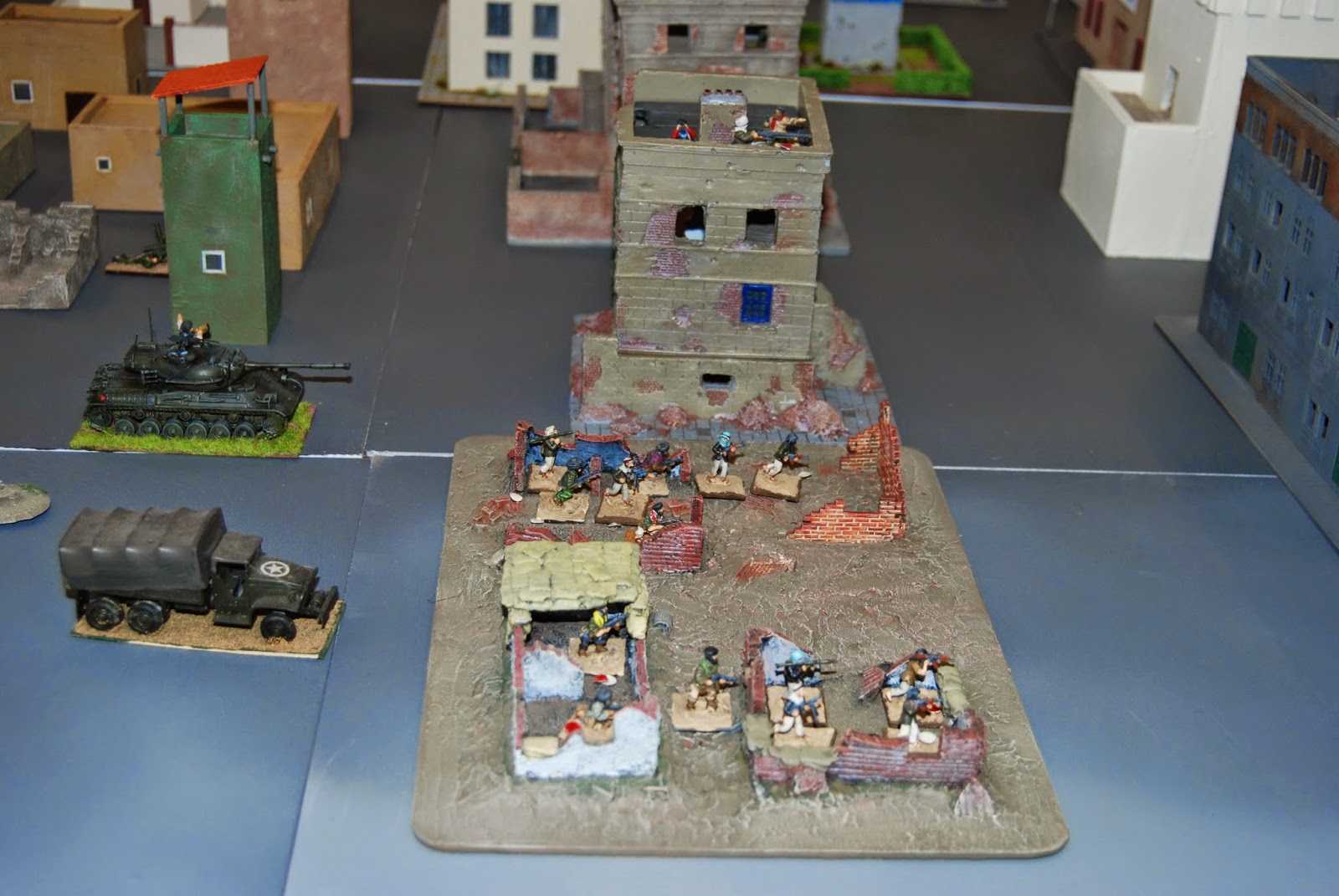 Overnight, the Turkish infiltrated militia across the Ministry of Culture Boulevard and occupied the ruin recently vacated by the Armenians, although the Armenians inserted troops into the English Church beyons and sent an advance detachment to occupy the ruin on the right.  In the meanwhile, Andrevian Govt forces began to retreat from the advancing Russians across the Krupnehr and began to infiltrate the flanks of the Turks and Armenians, both deploying reserve squads to secure the flanks with the Turks allocating the type 61 to cover the main axis of approach from the river.  An observer team for a 120mm mortar battery also advanced to join the trained militia HQ. 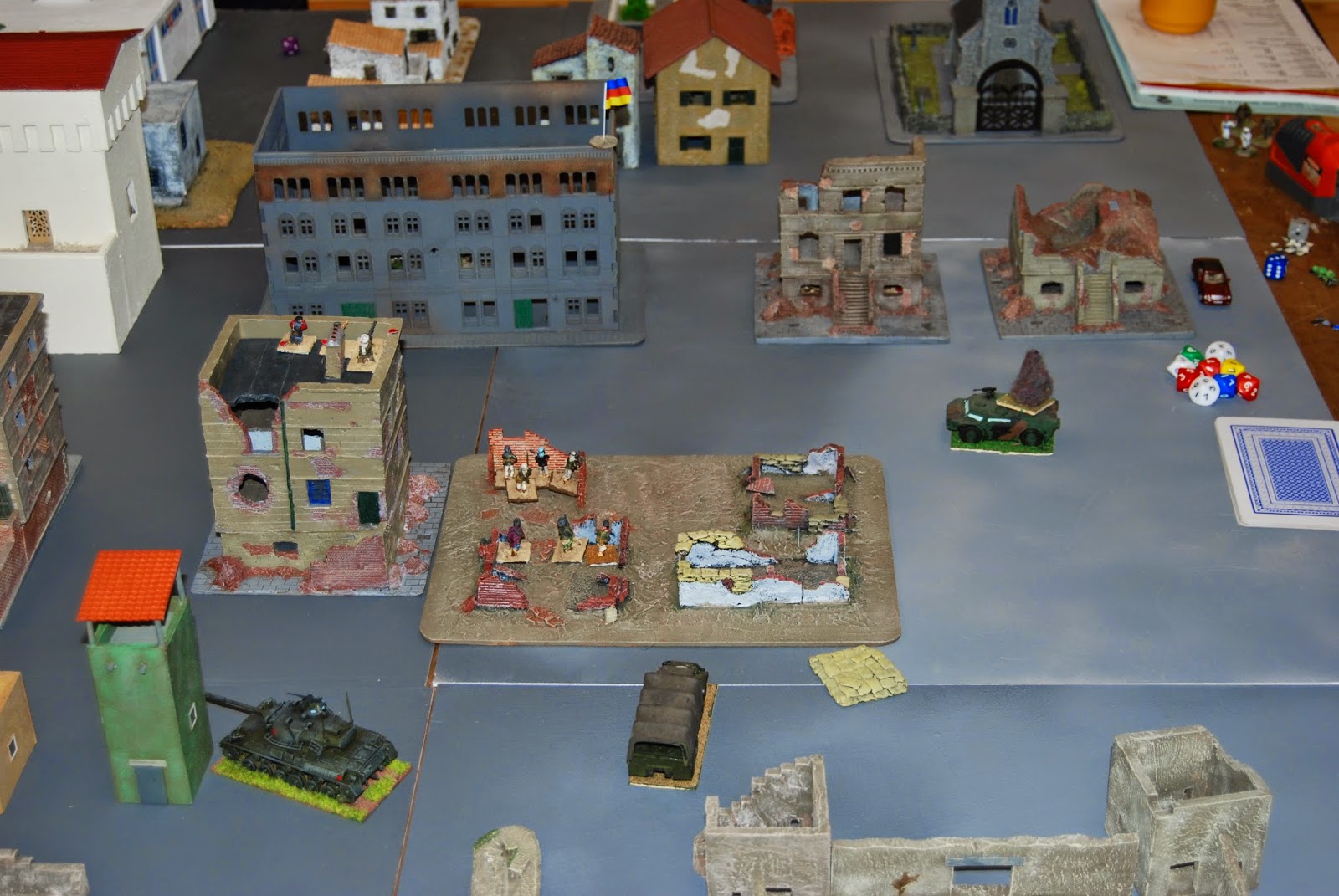 The reserve squad of 5 AK47, 1 PKM LMG, 1 sniper with bolt action rifle and 1 RPG gunner.  These guys are covering the advancing Andrevian Govt forces skulking in the white buildings beyond at the start of day 2. 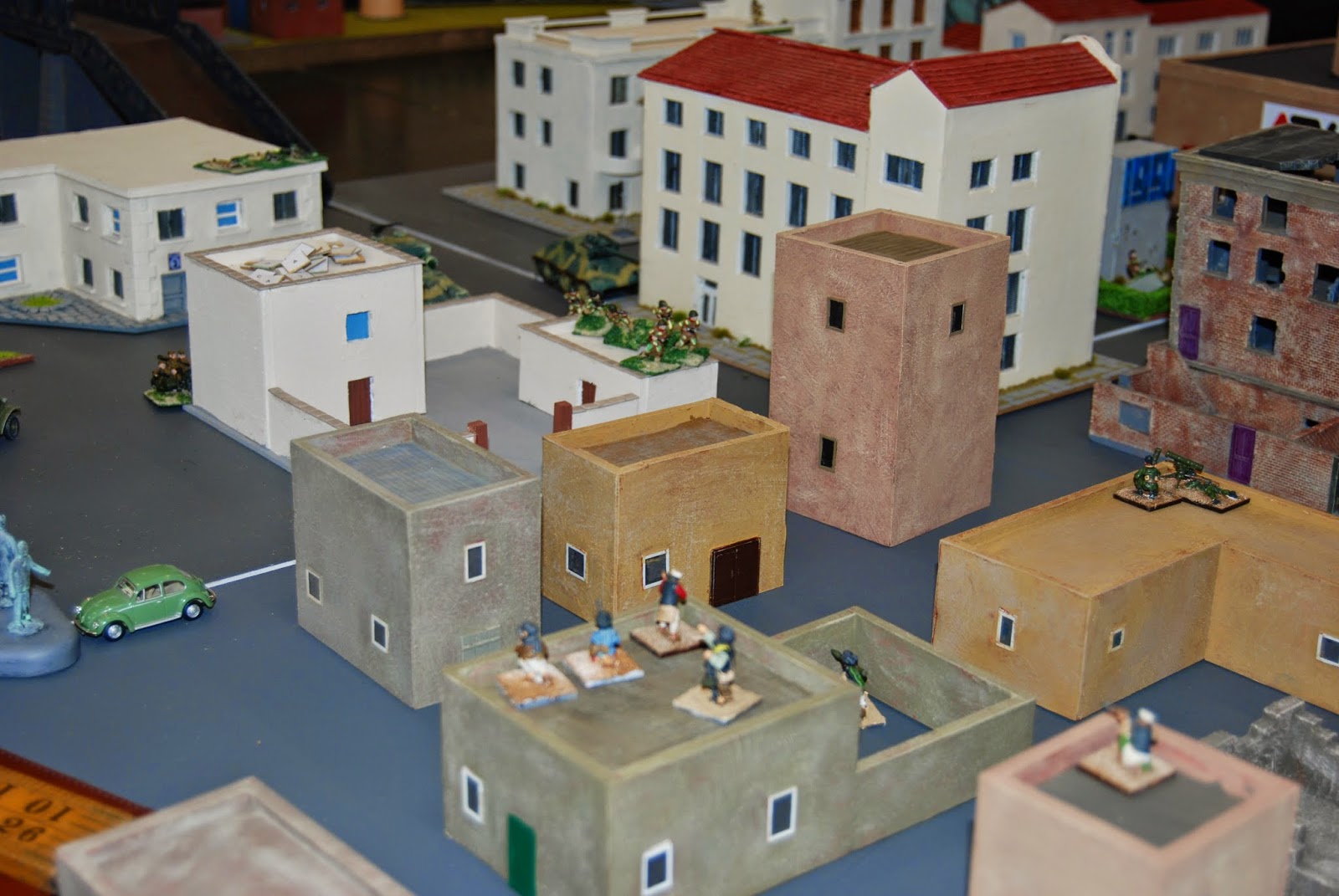 Andrevian Govt sniper and artillery observer team on the top floor of the TV tower (right paper plate) try and prepare a nasty hand grenade surprise for advancing troops on the lower floor (left plate), whih turned out to be Italian Special Forces.  Although an Italian died and another was wounded, none of the Govt troops survived the brisk fire fight. 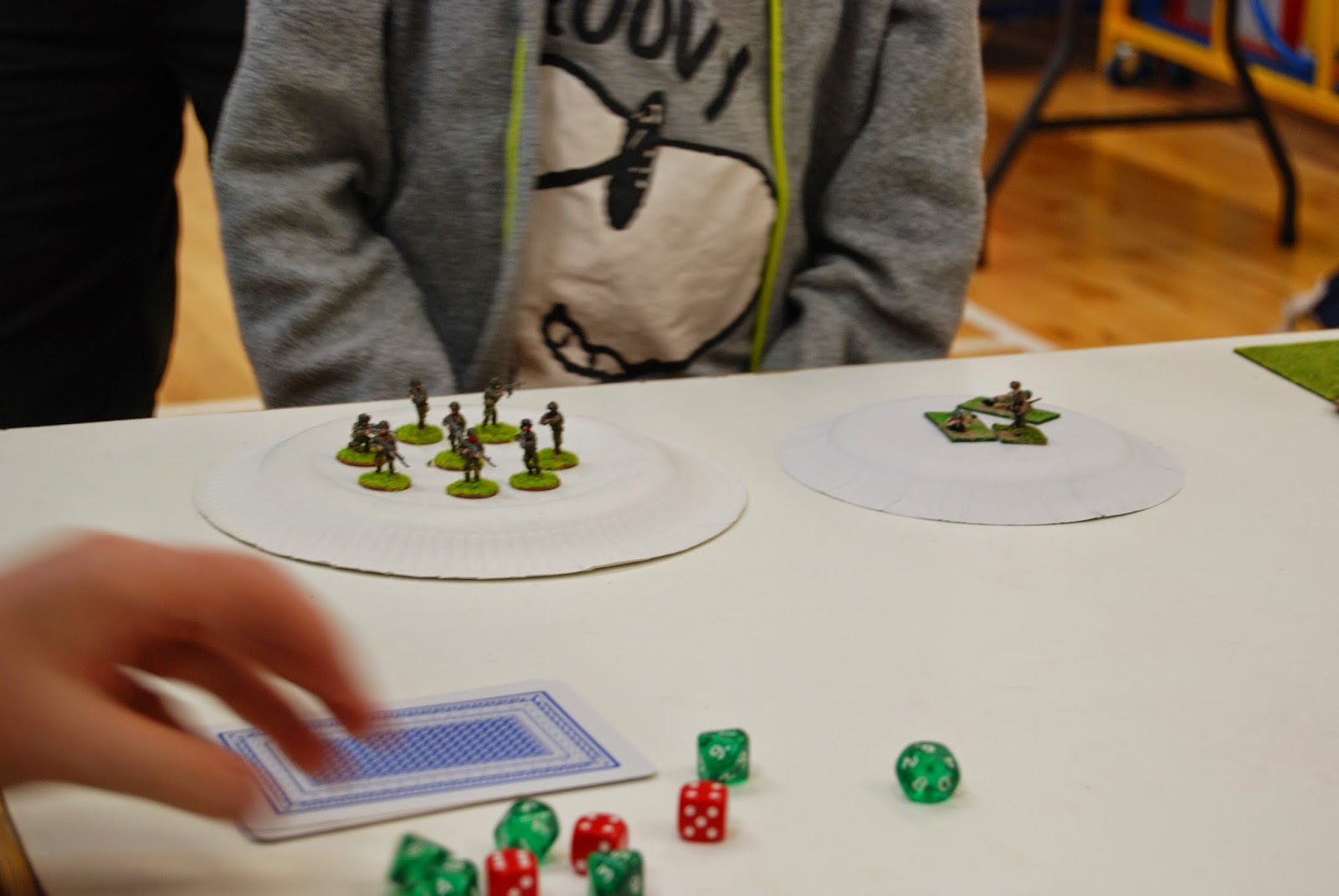 A British Wombat team awaiting the call to deploy. 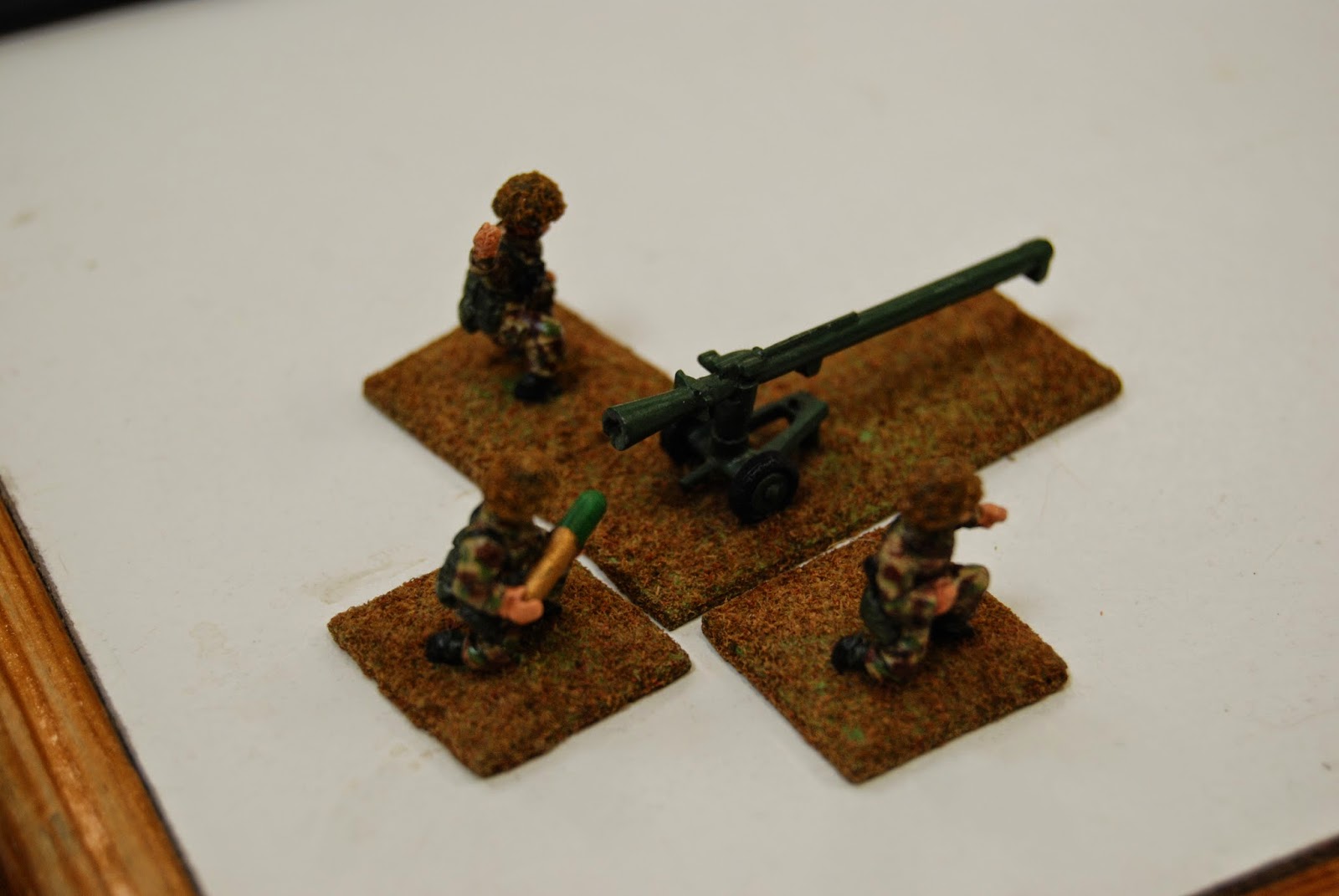 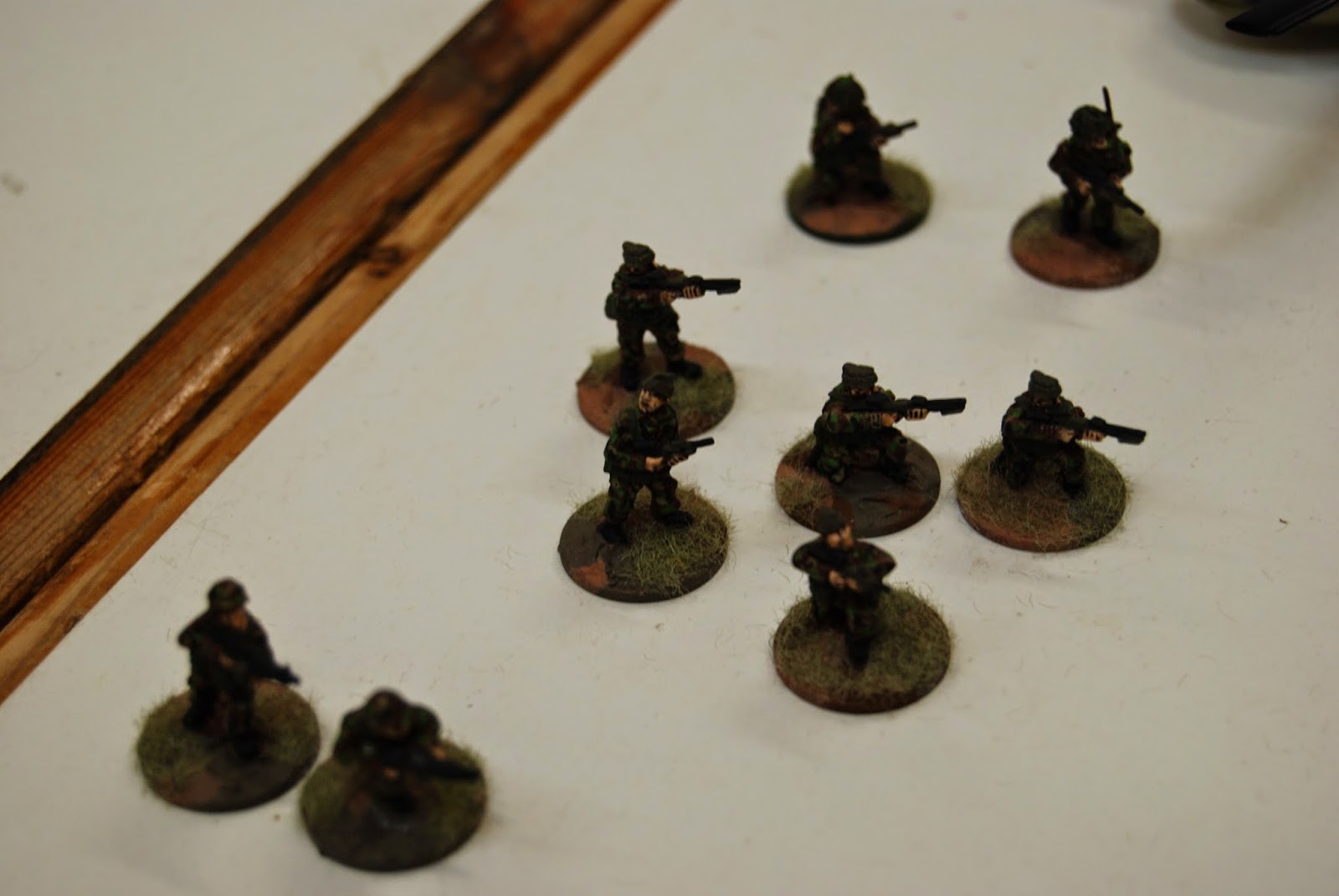 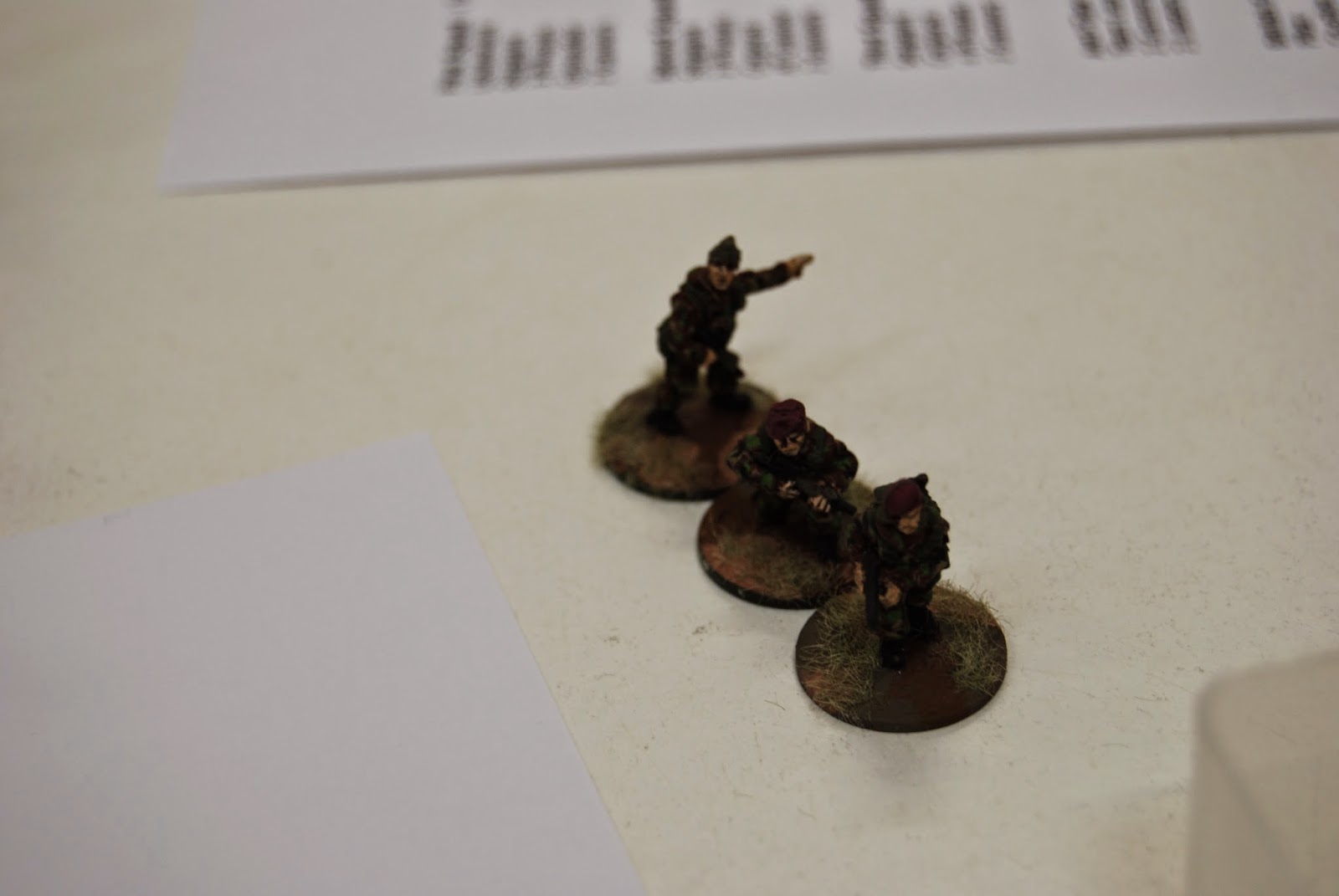 US forces about to embark on their Chinook transport heading for a special mission in Tcherbevan. 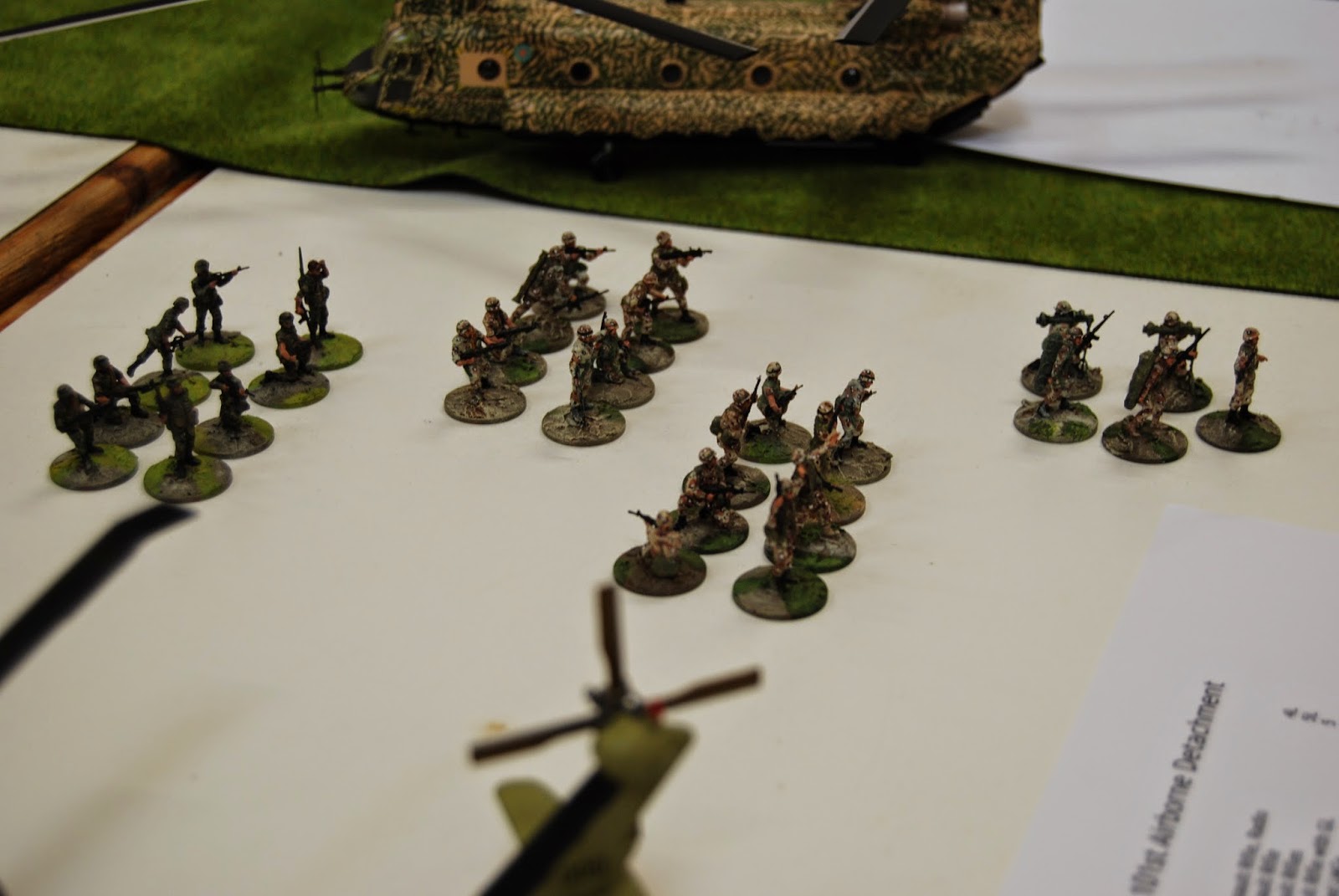 US Special Forces Black Hawk, about to be given the stand down order for day 2.

Correction: Stand down was countermanded and the helo was used to lift a special forces squad onto the roof of the Italian embassy in downtown Tcherbevan in the last moments of day 2. 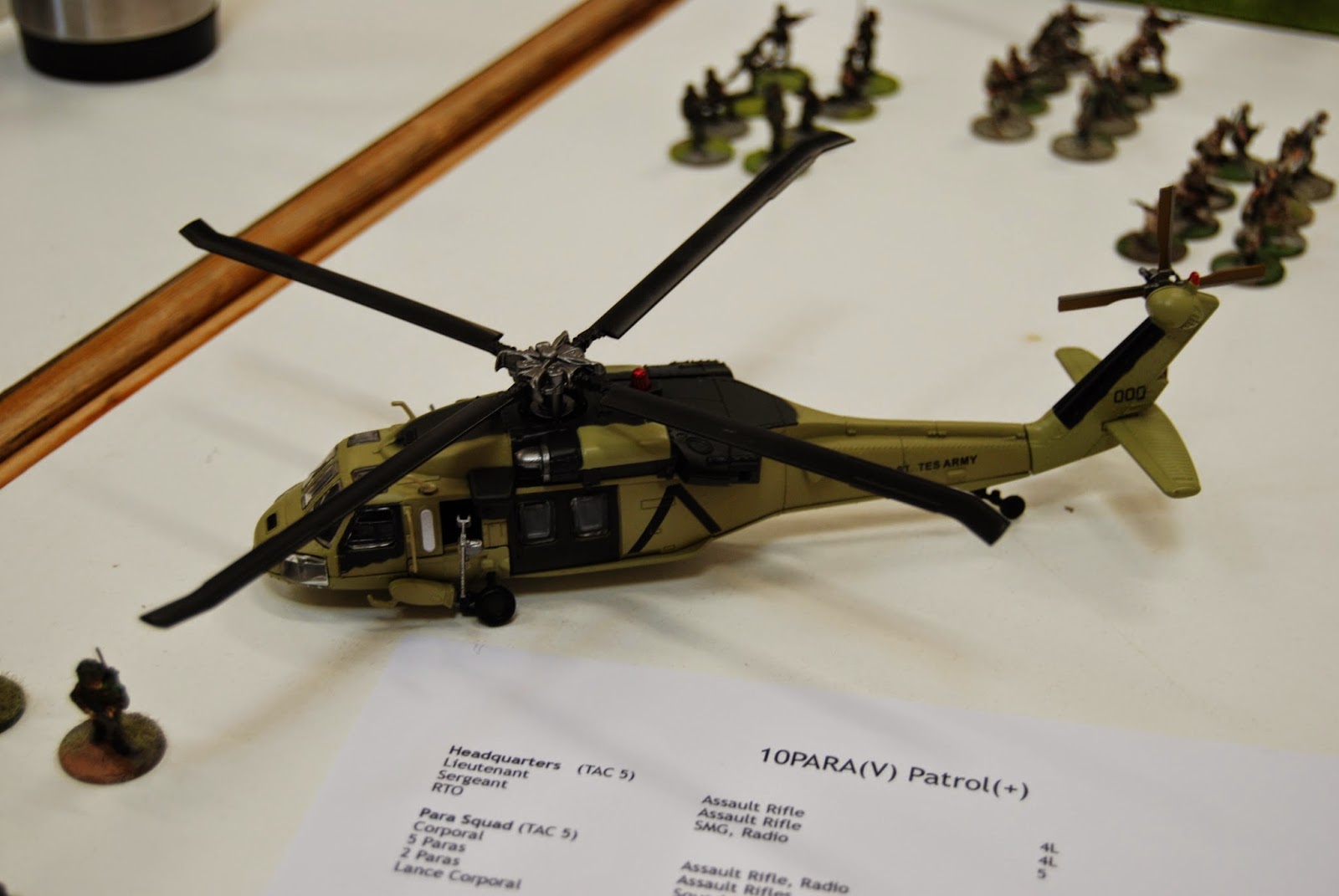 The Italians in control of the TV tower. 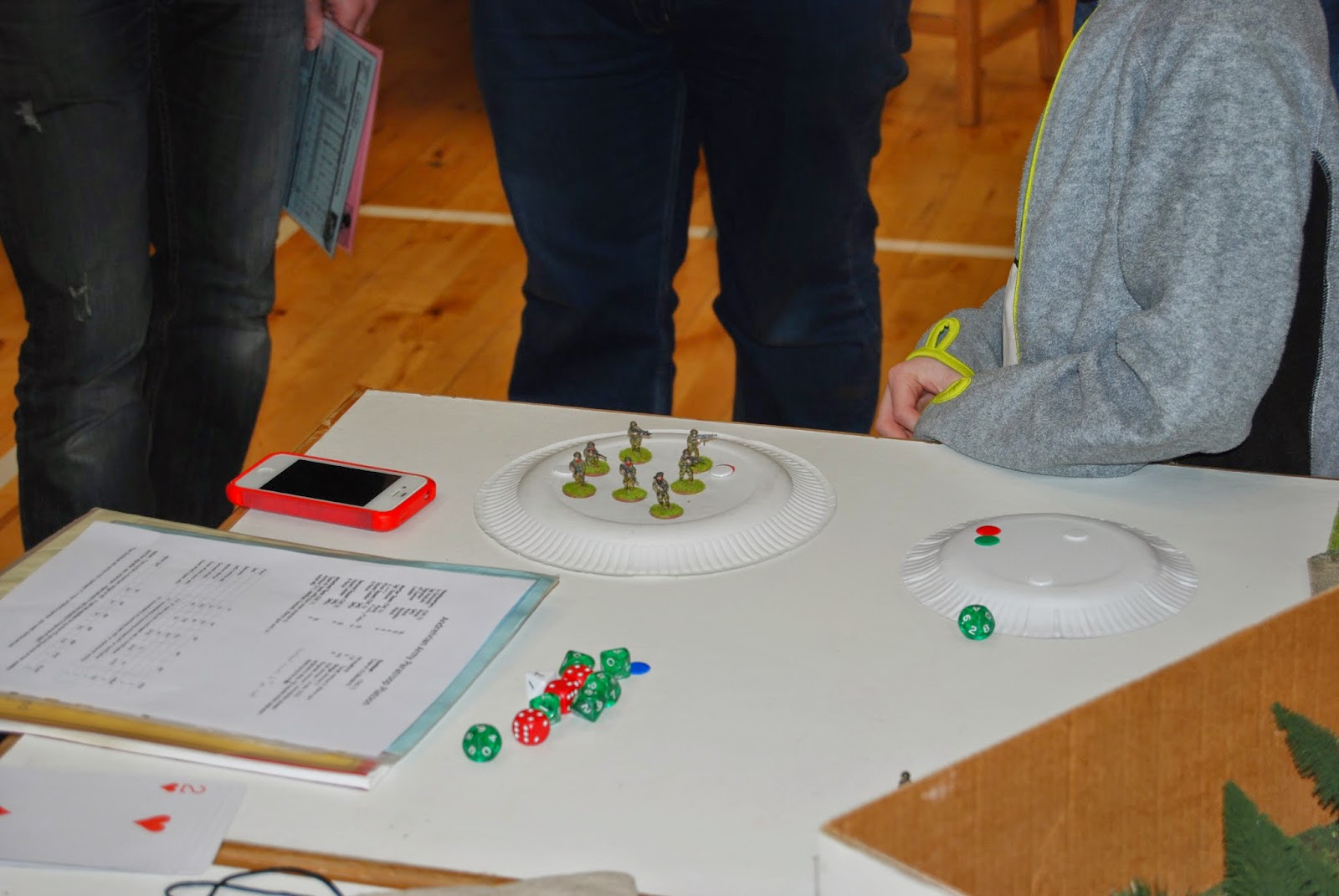 Serge Benkian, charismatic Armenian forces leader and much needed morale boost for his troops, with small escort attempting to pass the French NATO contingent in the old colonial fortress on the edge of the Turkish quarter and rescued by US forces. (edited - see Richard Phillips comment below). 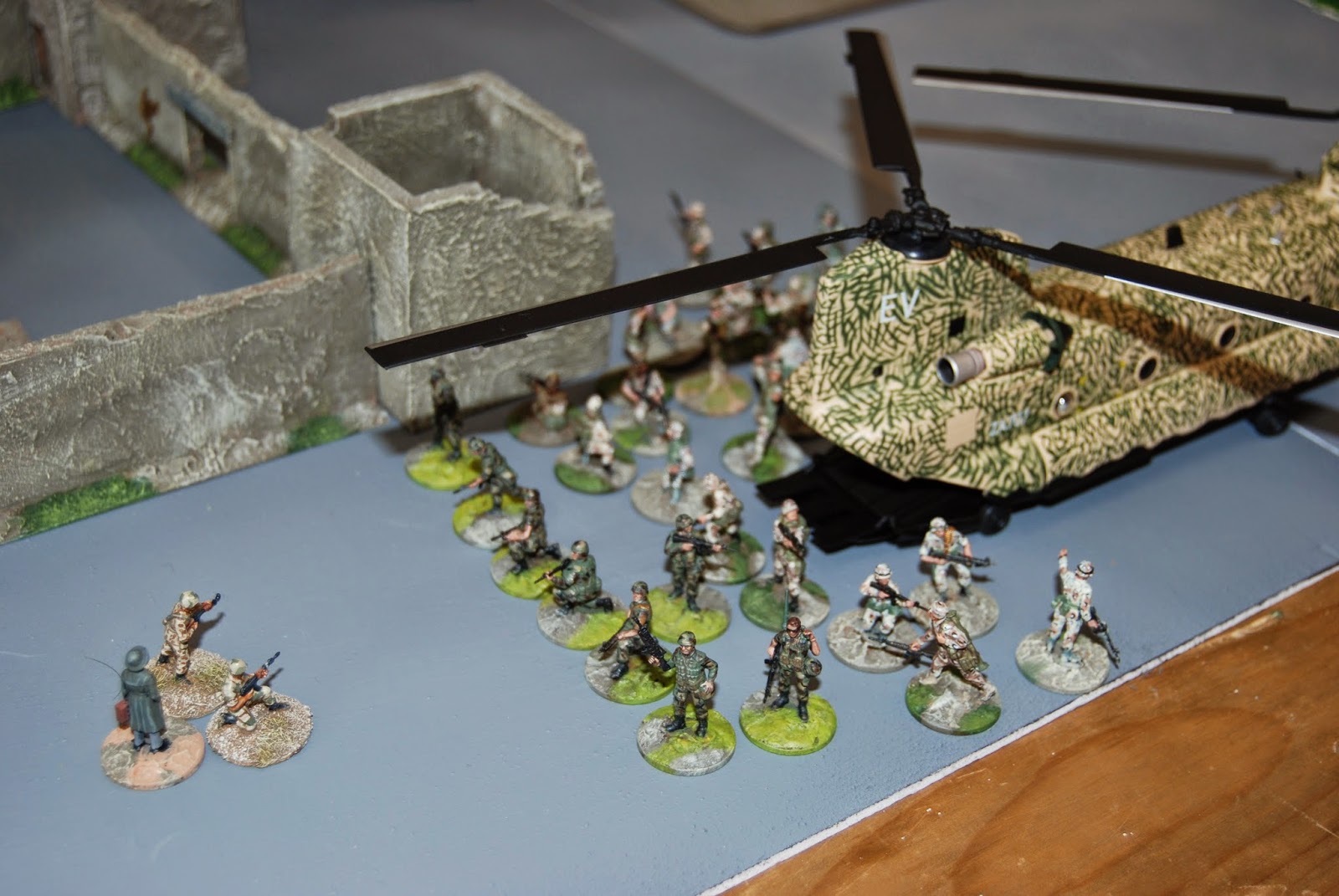 Looks like the 101st Airborne - be cool everyone, perhaps they will let us past! 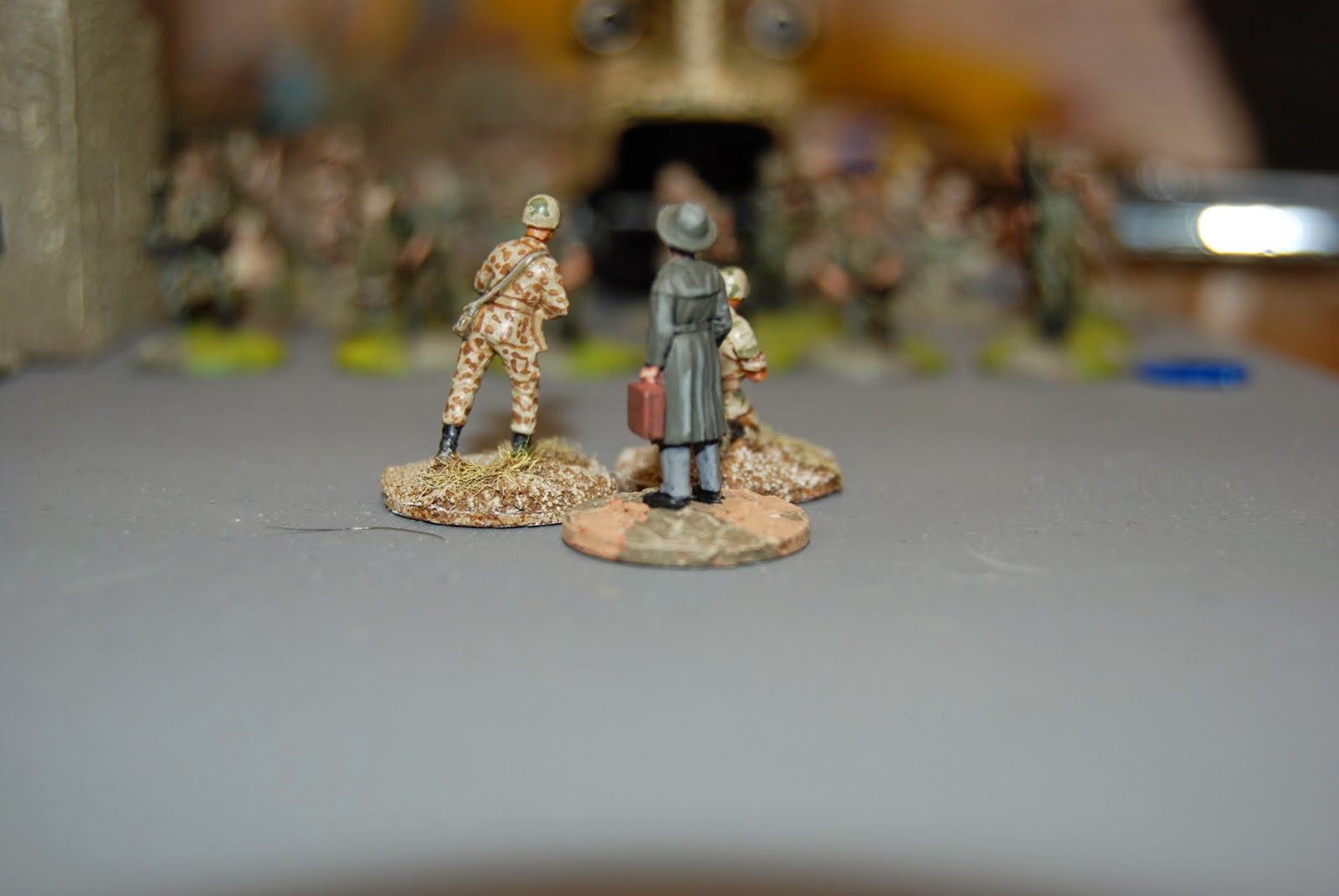 Alas no.  On to the plane please sir.  What will happen to the Armenian leader?? 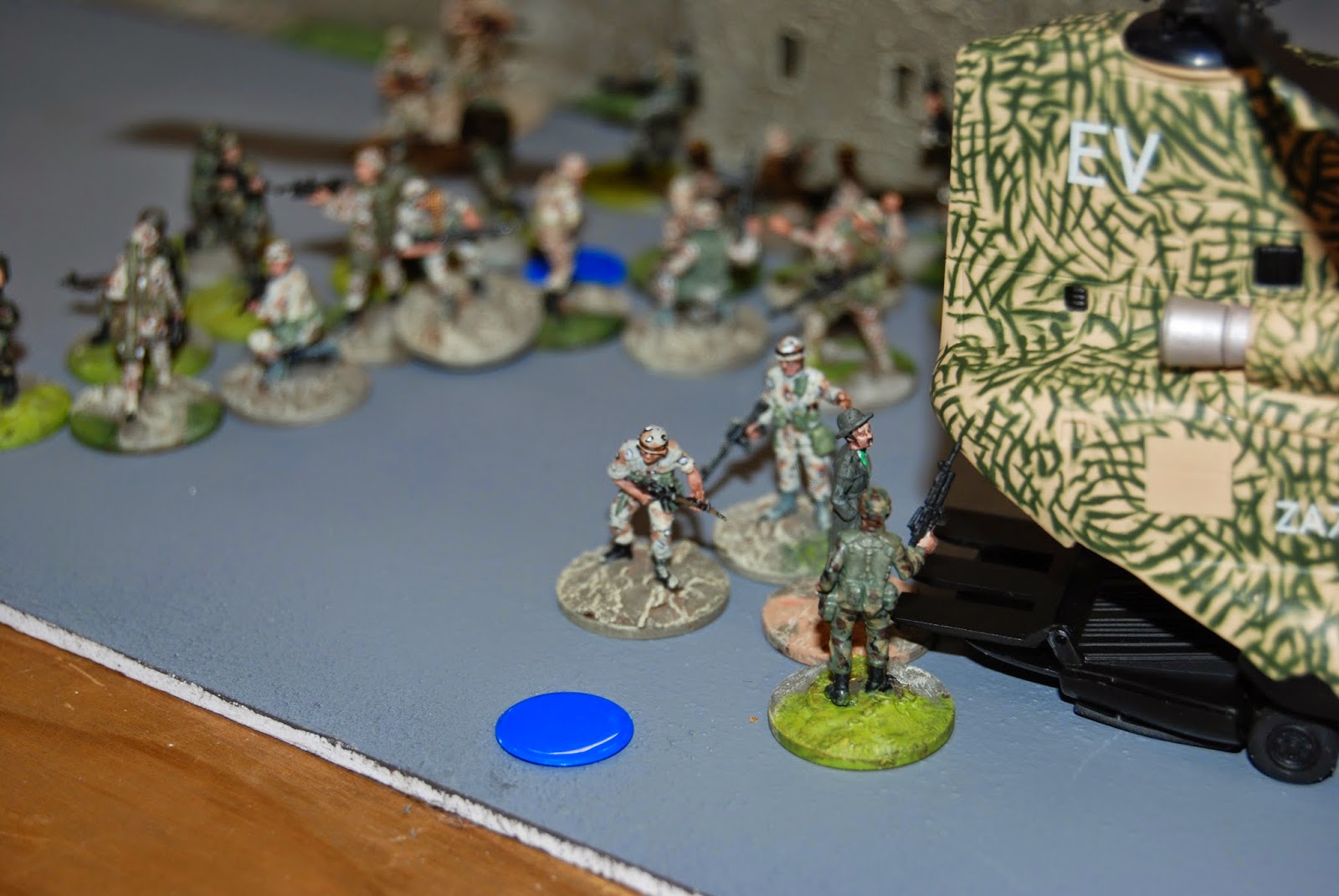 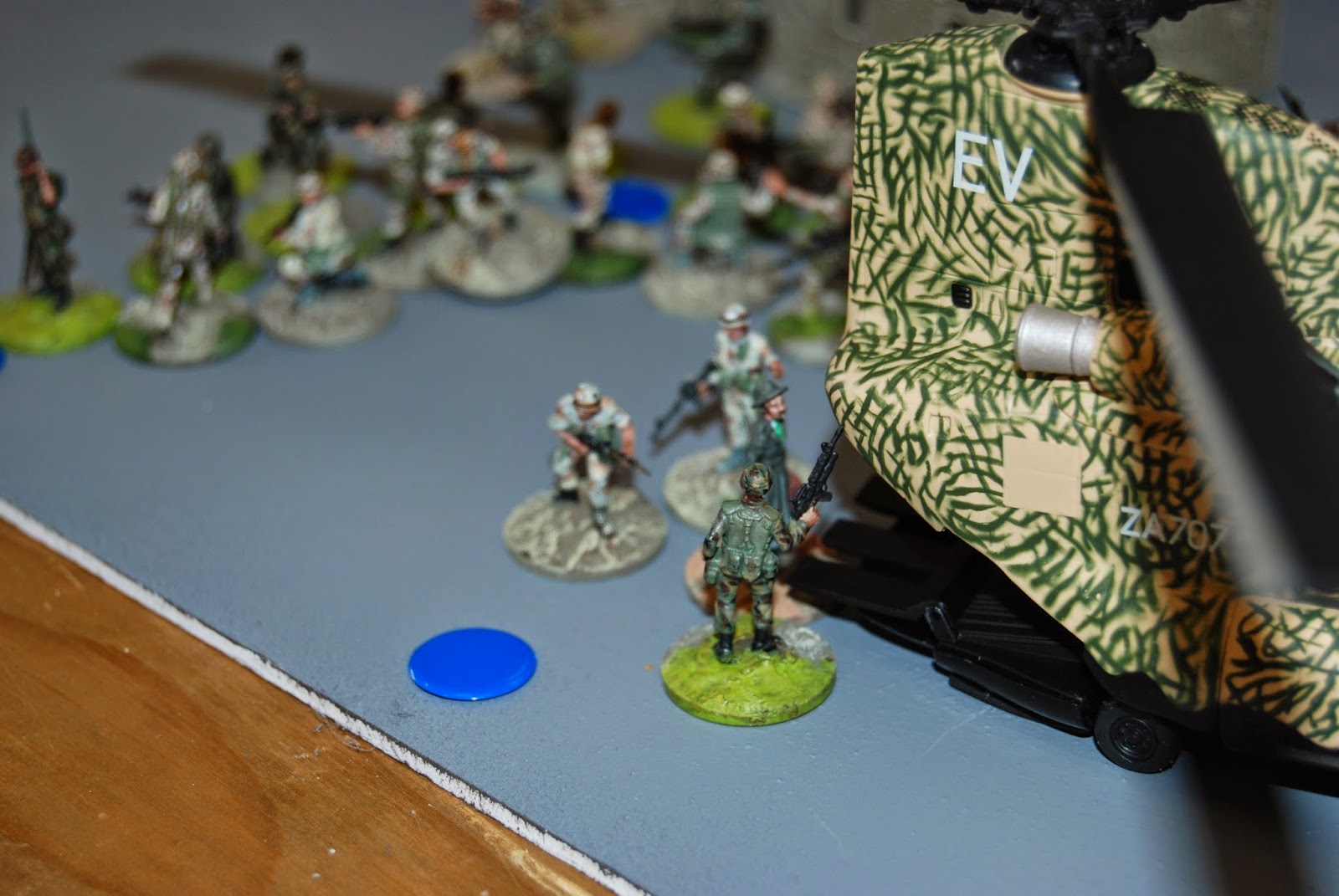 I really must insist sir! 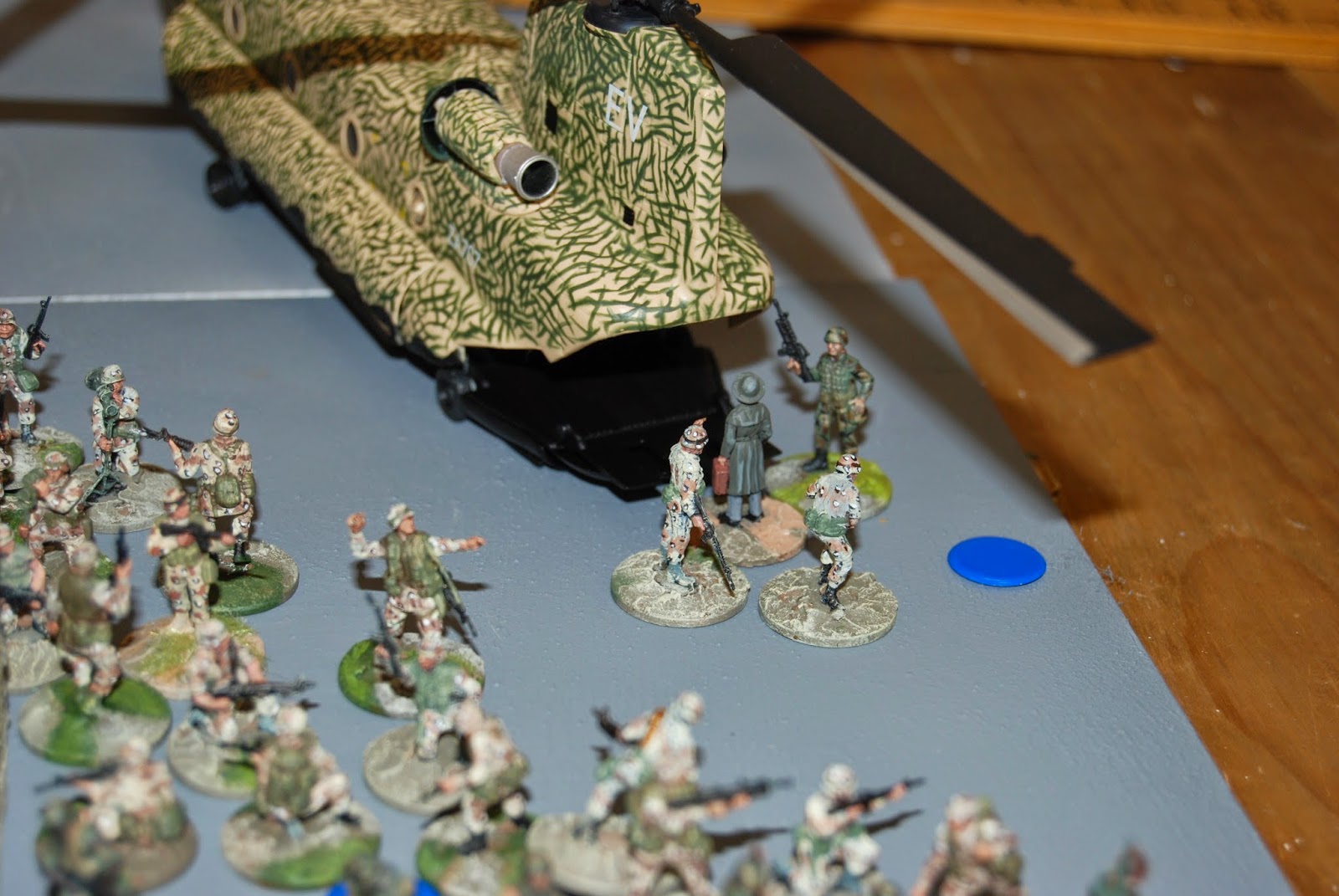 The Andrevian Govt bath tub deploys to assist in stemming the advance of the Russians pushing to secure the Krupnehr crossings.  NATO later found the coaster moored on the jetty at Tcherbevan to contain a mobile "interrogation centre". 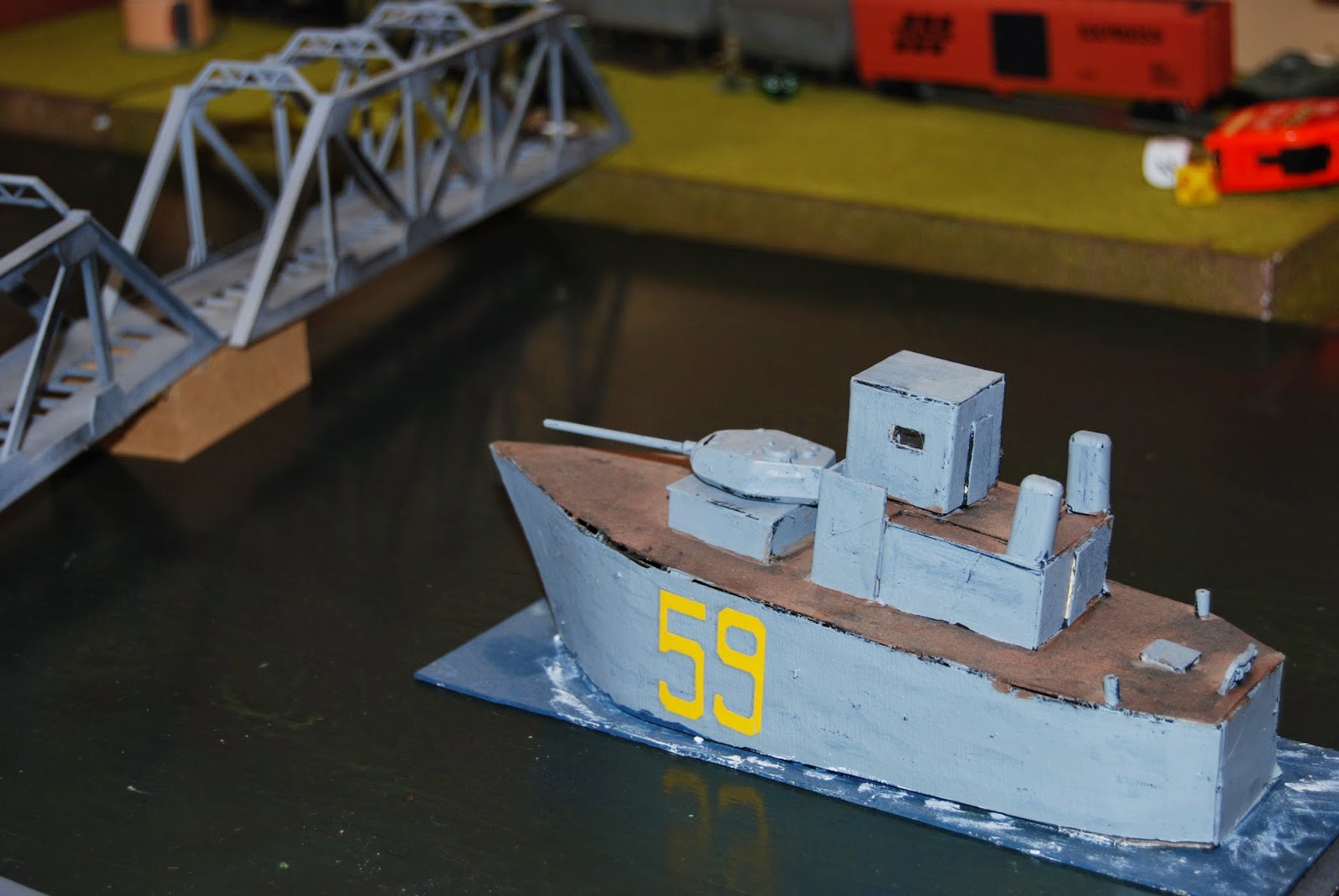 The Andrevian Govt manages to make allies out of the Armenians and Turks, who sign a non-aggression pact in order to put paid to the last Govt hold outs. 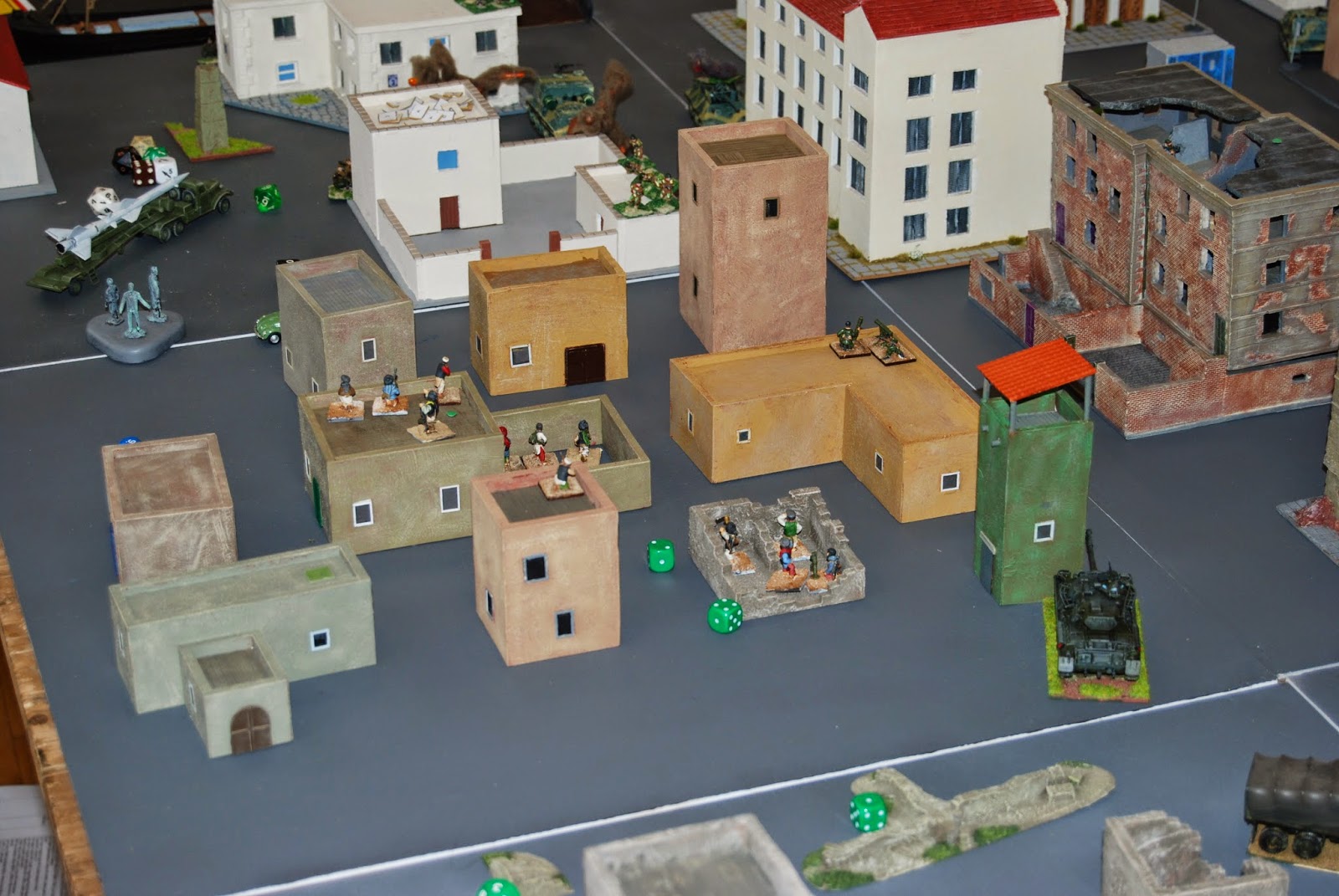 Govt armour and infantry gradually being whittled down by tank guns and sniper fire. 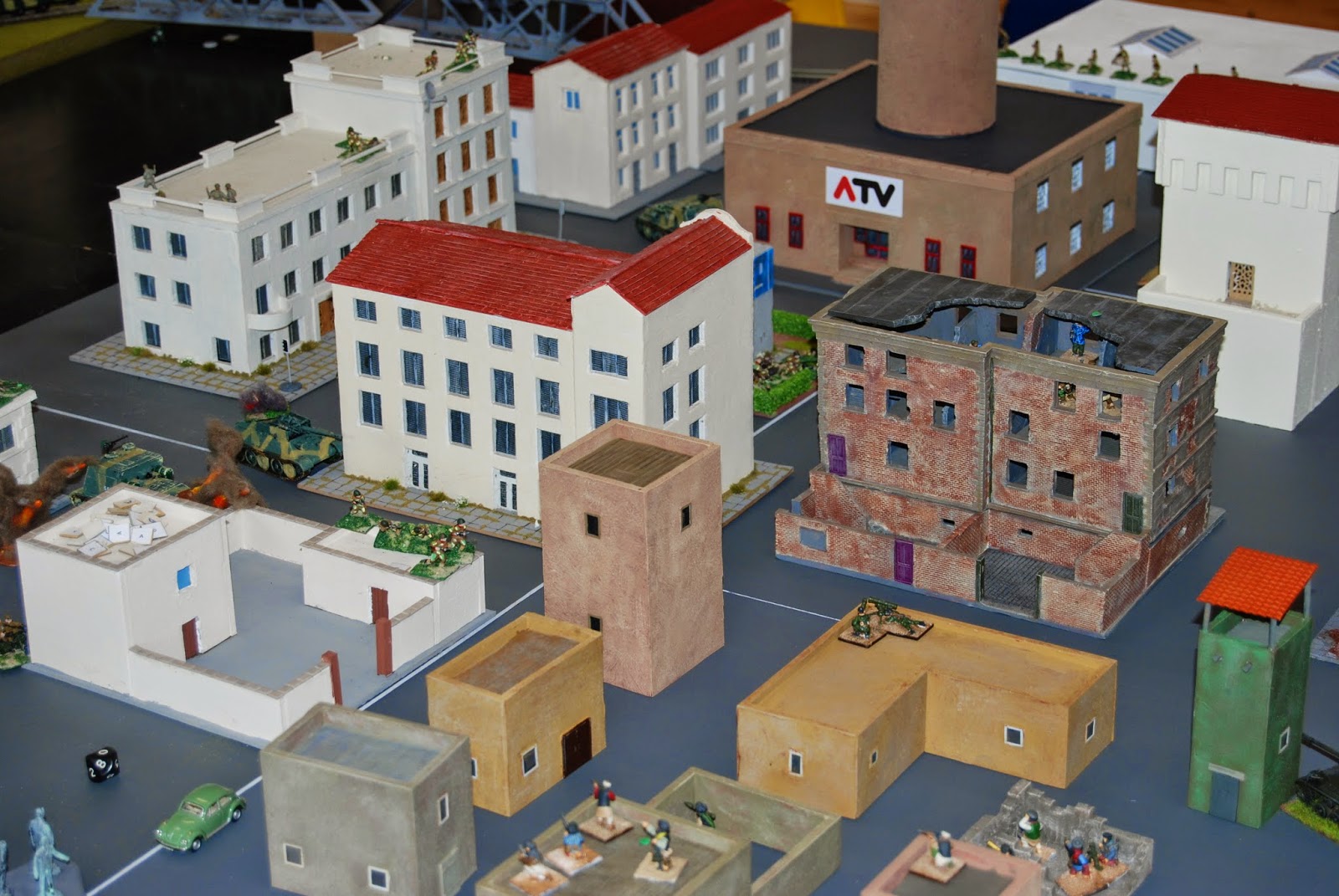 The Armenian T55 (to left) intending to serve some harm on the Andreivian Govt apcs strewn about the TV station. 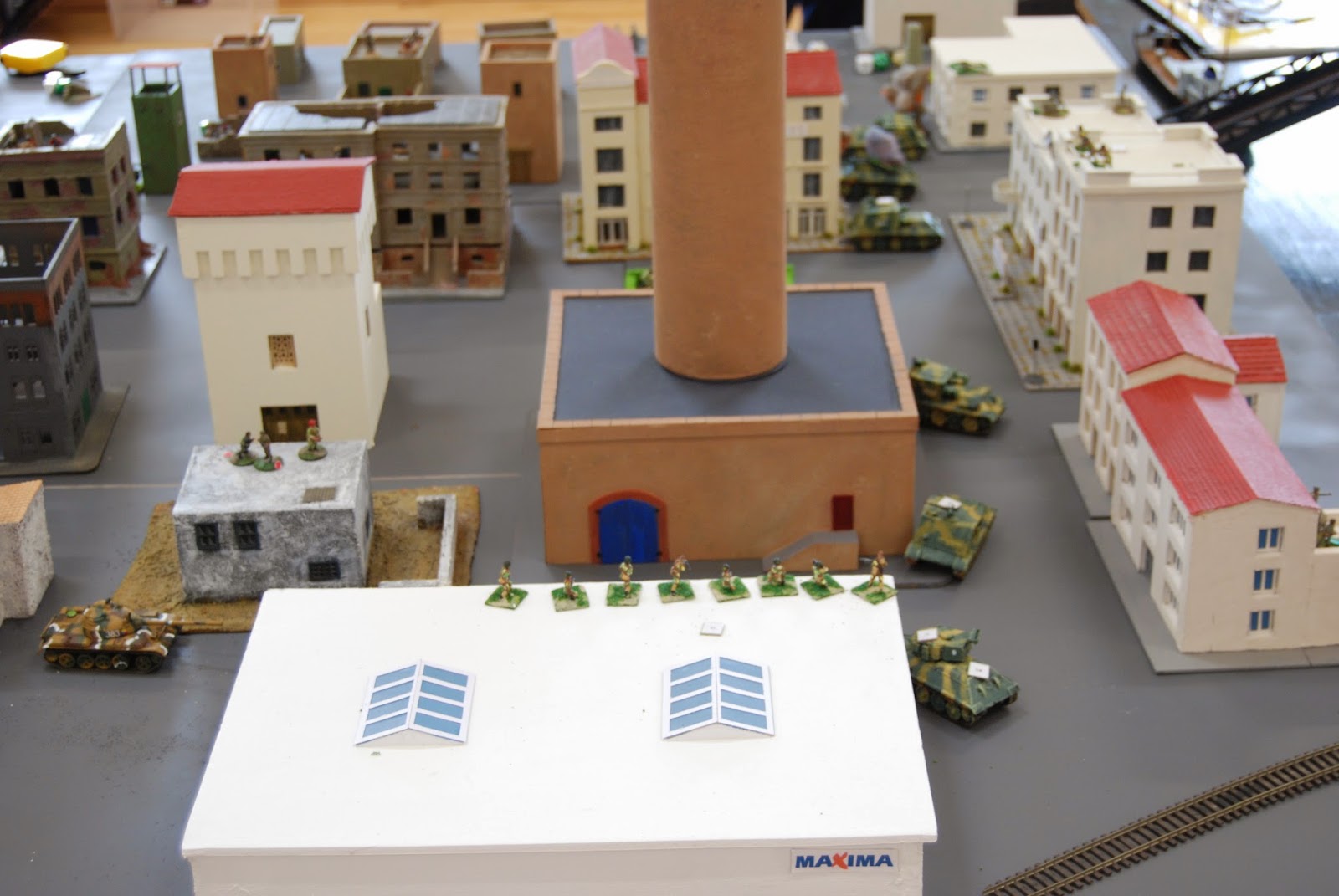 The Turkish female sniper caused significant losses to the Govt squad occupying the 1991 monument, although she was to lay down her life for the fatherland soon after this picture was taken. 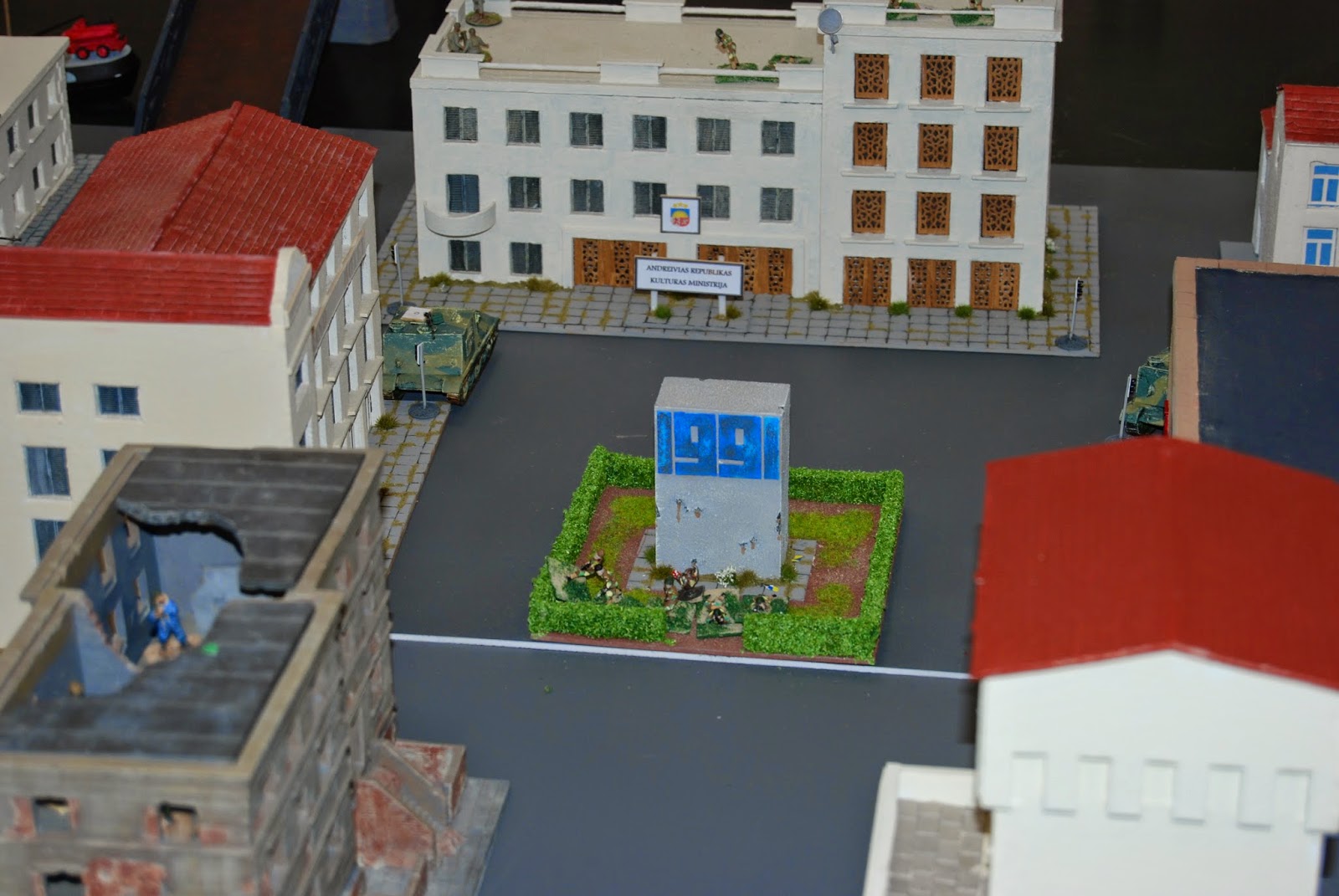 The Italian sniper in the TV tower continued to whittle away this particular squad. 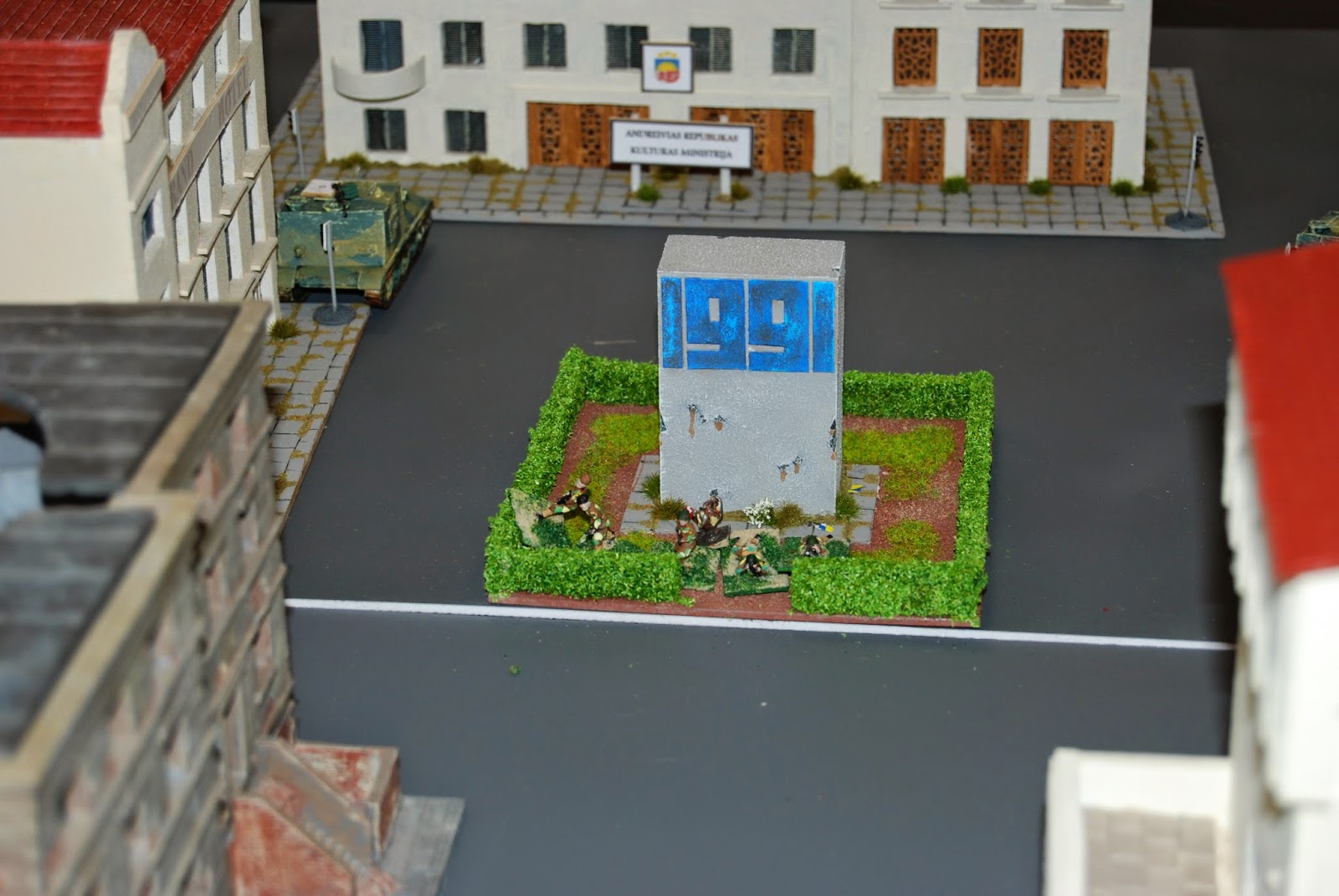 The Turks were quite satisfied by the end of day 2, having secured a toe hold in Armenian territory, fending off an Armenian counter attack, agreeing a cease fire and anti-government coalition with the Armenians and holding off the Andreivian Govt.  Fortunately, NATO seemed to leave the Turks alone on this outing.

A great, fun weekend, loads of food (the local pubs light bites section comprised a bowl of chips or a chip butty!), great Yorkshire bitter and good company.  Thanks to Richard Crawley for organising and running the whole thing.  I'm keenly looking forward to the next Andreivian outing.

Thanks to you for looking.
Posted by Andy Canham at 20:15