The Plastic Soldier Company ran a VE day sale recently, which convinced me to add some artillery to my WW2 Soviet forces.  I picked up a pack of the Zis2/3 guns and completed two as Zis 2 57mm AT guns and two as Zis 3 76.2mm divisional guns.  I gave the crews of the Zis 2s helmets and Zis 3 crews field caps.  Each gun is based with three crew and I based each fourth crew member and boxes of ammo individually, three per gun, to represent the additional crew option in rules like Battlegroup.  Each sprue comes with spare wheels and barrels to make either gun variant, as well as individual shells, shell cases and small arms (rifles and SMGs).  I have plans to use some of the spare barrels to make into log-built field defences, using bamboo skewers and balsa offcuts.

The Zis 2s, waiting for the fascist armour. 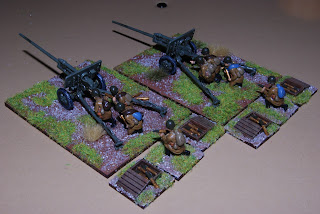 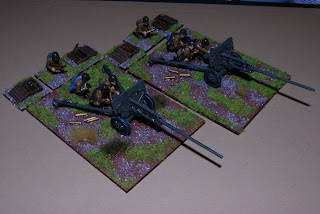 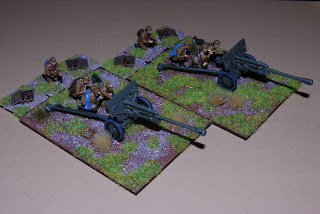 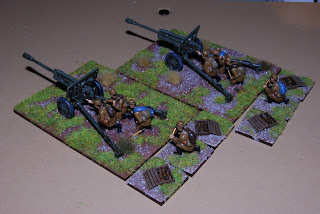 Great models, relatively straightforward and intuitive to assemble, despite the lack of instructions.  A good regular asking price, but in the sale an absolute bargain.  I also have the 45mm AT gun pack to assemble and I'll probably do the same with that kit and assemble 2 as 45mm AT guns and 2 as 76 mm infantry guns.

Thanks for looking.
Posted by Andy Canham at 16:34