Steve H and I played out a game of Pike and Shotte at the club last night.  All the troops are from Steve's most excellent collection of 15mm miniatures.  I took command of a gallant Parliamentary contingent, consisting of two battalia, each of two pike blocks and four sleeves of muskets, one with a medium gun and the other with both a medium gun and a small gun.  There was also a battalia with a unit of dragoons and two commanded shot, one large, and two wings of cavalry, one armed with carbines, the other with pistols, each of three companies.  Steve took command of the Royalists, with a battalia of two pike blocks and four musket sleeves plus a unit of commanded shot, and another battalia of four pike blocks with two musket sleeves, recruited from Cornwall.  Steve also took command of two wings of cavalry, each of three companies.

The disposition of our forces just as we got to grips is shown below, viewed from the rear of the Parliamentarian lines.  We went with a classic deployment with cavalry wings to our flanks.  I placed the commanded shot in the centre, flanked to either side by the pike and musket battalia.  I placed the unit of dragoons to the rear of the woods on the left so they could advance and dismount on the front edge of the woods and harass the cavalry on that flank.  Steve's Cornishmen form the pike block on the right of the photo, while his musket heavy battalia with a unit of commanded shot is in the centre. 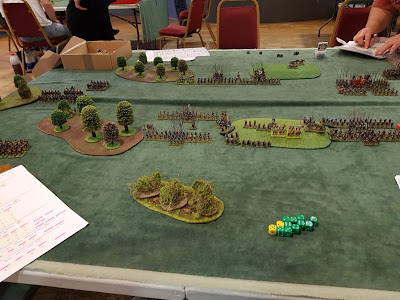 View looking along the "deadly field" between the two armies.  Parliament on the left, Royalists on the right. 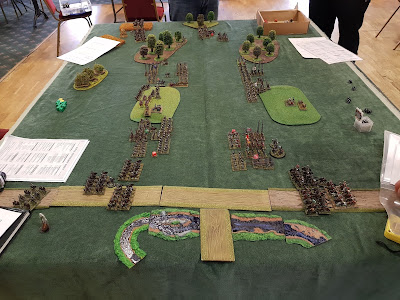 The dragoons have been doing their stuff and attempting to disrupt the Royalist cavalry on Parliaments left, making them reluctant to charge home with only two of their three units. 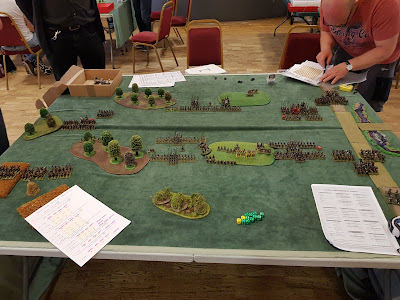 This tactic worked as long as I could keep rolling at least one 6 for firing.  So far so good. 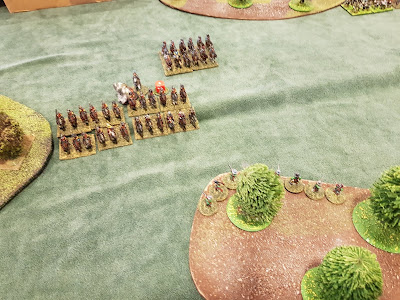 Initial musketry on Parliaments right were largely ineffective, but the Cornish pike blocks were getting closer. 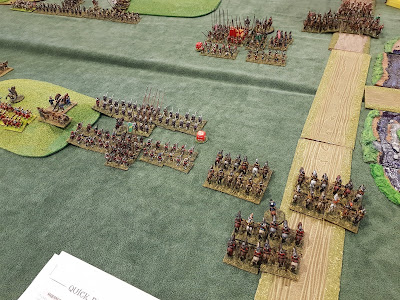 An early success for Parliament saw a unit of Cornish muskets break and flee the field. 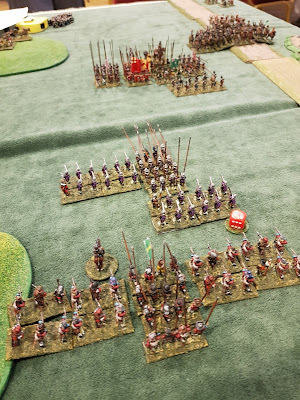 On Parliaments right, the cavalry watch each other with suspicion, while there is much push of pike and wielding of muskets like clubs in the infantry ranks. 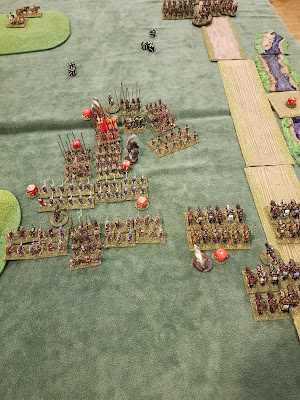 In the centre, Royalist infantry had caused some nuisance hits on the numerically superior Parliamentarians, but in response, the Parliamentarians much regretted allowing their powder to get damp as their fire was ineffective more or less all the way down the line. 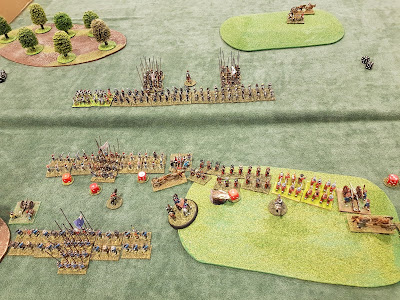 Alas for democracy, on the left, the Royalist horse managed to charge and broke the Parliamentarian cavalry on that wing. 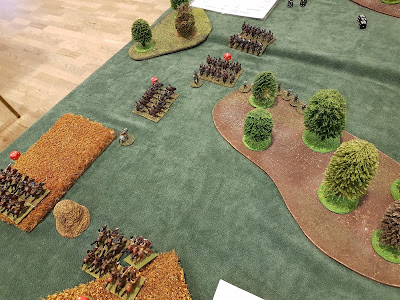 By the close of the game, on the right, and much against the odds, the Parliament horse managed to break the Royalist horse, although there would need to be a significant amount of rallying before they would be any use again.  One of the Parliament commanded shot units has wheeled right and taken the Cornishmen under fire from the flank. 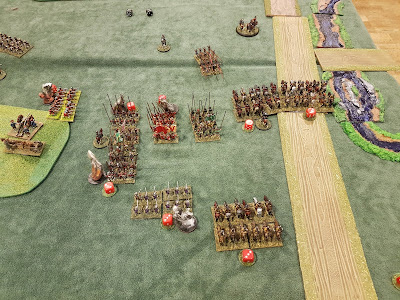 In the centre, Royalist horse from the left flank charged in and broke the light gun and a unit of muskets, but pulled up short of the pikes, which had broken a sleeve of muskets in the Royalist line.  Another Royalist pike block had charged the commanded shot, but they were holding their own at least initially. 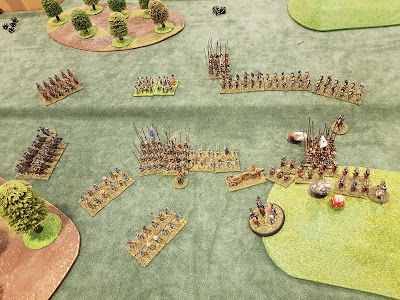 On the left, two units of horse were waiting their opportunity, while the third was resting shaken. 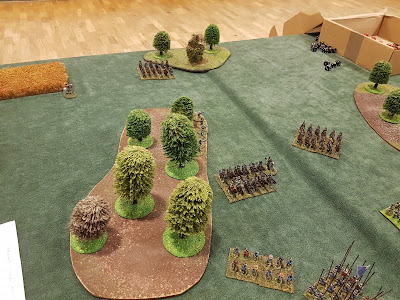 We agreed to call it a draw, although things were beginning to go the Royalists way.  We agreed that both commanders could report back to King and Parliament that there had been a bloody struggle with great loss of life and maiming, but with little to show for it.  Both sides could lick their wounds and enter another round of recruiting, ready to meet again on another field somewhere in the southwest of England.

This game was great fun to play.  For the first time I got to grips with the proximity rule which restricts what units can do when there is enemy close to their front.  Several other players stopped to say what a great looking table and Steve's troops did indeed look the business.  Thanks to Steve for laying this game on, I really must get on with my 10mm ECW army.

Thanks for looking.
Posted by Andy Canham at 18:40