Will and I played out a game of Battlegroup at the club last night, using stats from the Overlord book.  Will had devised a scenario based on a Rapid-Fire game based on an action during Operation Nordwind in Alsace during very late 1944/early 1945.

I took the German side with an on-table SS panzergrenadier platoon, plus an additional squad, tripod MG34, 20mm AA, 2 artillery spotters and an FHQ.  Crucially, AT support came from a Stug IIIG, Jagdpanzer IV 70 and a PAK 40 AT gun.  I had to deploy half the platoon in woods on the German left and half in buildings in the village of Herrlisheim on the right, with a broad open snowscape between them.  The Stug hid behind the woods on the left (one objective), while the PAK40 was dug in at the back of the village (two objectives) and the Jagdpanzer IV was concealed in trees on the forward edge of the village.  In reserve, I had a platoon of Panthers, plus a Gepanzert Panzergrenadier platoon, which would be activated if an objective was taken by the Yanks.

Will's yankies included a Sherman FHQ and three Sherman platoons, plus 2 platoons of mechanised infantry, 2 mortar half tracks, a towed 57mm AT gun, an op in Sherman and 3 gun Priest battery.

Will started with a bunch of Shermans coming on table, although his reserves rolls were generally low and force build-up took a while.  My Stug initially on reserve move waited his time, while the PAK40 and Jagdpanzer IV traded shots with the Amis.  Both the PAK40 and Jagdpanzer IV quite quickly got put out of action by poor morale rolls.  Galling to say the least as the Jagdpanzer was forced to abandon when hit by a Sherman 76mm round.  At the range, the Sherman couldn't penetrate, but need a 12 to pin.  Having rolled double six and pinning it, the Jgdpzr rolled a 1 for morale so abandoned the vehicle (a 1:36 chance of the pin and a 1 in 6 chance of the abandoning result, so 1 in 216 chance of the outcome).  Fortunately, my veteran Stug saved the day.  It swung to the edge of the woods, unsighting half the yankee tanks and then took pot shots at the other half.  First a Sherman brewed up.  Then the Stug was pinned, but follow up fire hitting the Stug called a morale test and beyond the call of duty test, which passed and so another Sherman brewed up.  In his own turn, the Stug brewed up another Sherman, and was again pinned by return fire before taking a non-penetrating hit, another beyond the call of duty test passed and another burning Sherman.  The shot below shows the highlight of the Stugs activity with burning Shermans scattered downrange. 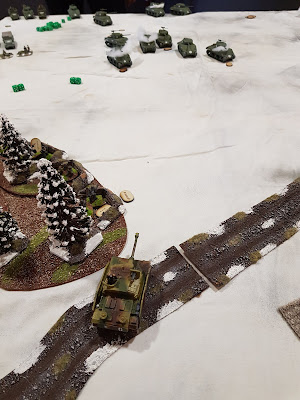 Sadly, all too soon, a lucky shot from a Sherman did for the Stug, by which time Ami half tracks were disgorging a platoon of infantry in front of the woods.  Two Ami sections and a .30 call were KO'd, a third section and .30cal reduced to one man each, but neither were pinned so they skulked back into their half tracks for protection. 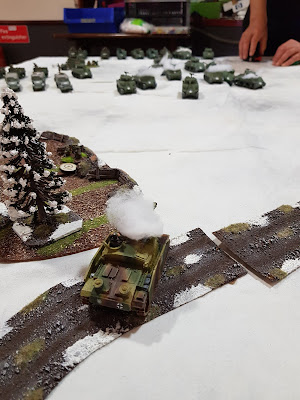 A larger view of the table top.  Pintle MG fire from halftracks and 3 gun Priest battery strikes have done for the infantry in the woods and the Amis have secured the objective there, triggering the German reserves to stabilise the front.  Panzergrenadiers have rushed across the railway line in 251s, trying to close with the US infantry in the woods.  Off screen to the right, Panthers trade long range shots with Shermans trying for suppression.  On the right, Ami half tracks close with the village. 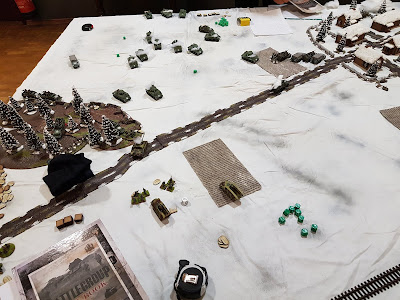 One of the Panthers is KO'd at the level crossing by a Priest artillery strike.  More 251s with infantry rush towards the village. 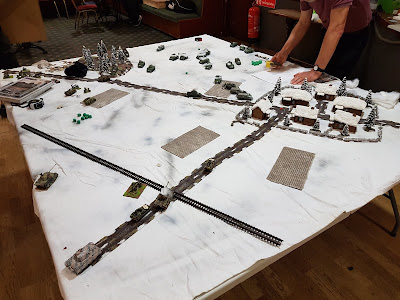 The village, looking deceptively tranquil, but each house is manned by panzergrenadiers armed to the teeth. 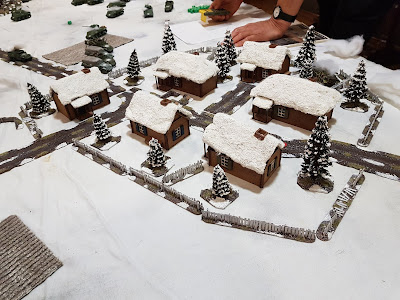 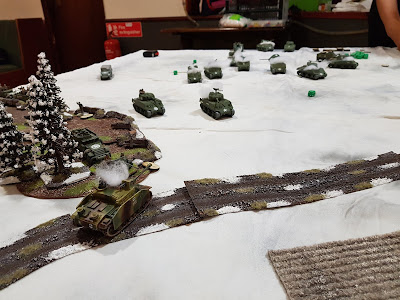 The battlefield littered with burning Shermans. 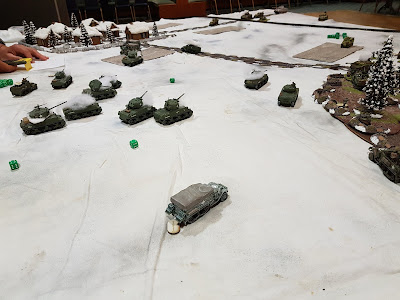 We played from c. 6pm until 11:30, but had to finish just short of a conclusion.  The plucky Jerries were 2 points off breaking, while the Amis had oodles of points left (around 30), so the Germans hadn't done too well.  The Germans had poor luck with their two timed Nebelwerfer strikes, which completely missed anything owing to Ami reluctance to get stuck in and close with the enemy.  Fortunately, the two pre-planned artillery points were much better placed, allowing off table 120mm mortars to pin lots of vehicles at crucial moments.  The poor morale rolls for the PAK40 and Jgdpnzr IV were also a blow as some flank shots would have kept the Amis more bottled up.  Historically, the Americans left the infantry to mop up the woods and drove the tanks into the village, with disastrous results from Panzerfausts at close range.  Afterwards, we discussed whether there needed to be a scenario rule requiring the Americans to split their force, or maybe the Germans get reserves from a particular turn (rather than when an objective s taken) and whether some form of hidden deployment should be used.

All in all, a great evenings entertainment.  Lots of heart in the mouth moments.  The commander of the Stug would have deserved an Iron Cross had he survived.