For a bit of variety from WW2, I dug out a box of Hat Colonial era Bengal Lancers.  Comparing pictures of WW1 Indian Lancers from Mark Hargreaves book on painting WW1 British, Dominion and Indian figures, there was little difference between the colonial era and WW1 era troops and at this scale, I figured I could get away with it.

I largely followed the paint recipes in the book, although decided I wanted to give them the dress puggree/turban, to make them more colourful to stand out on the tabletop. 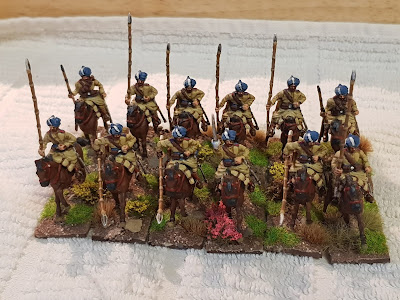 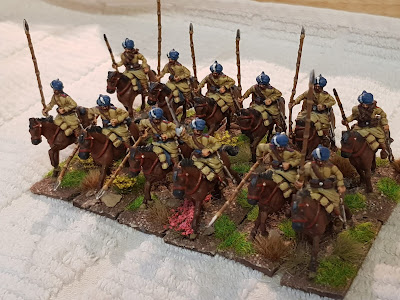 Close up of the commander and a couple of lancers charging with lances levelled. 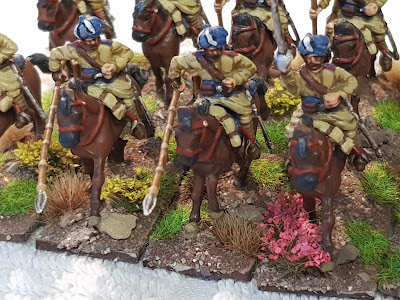 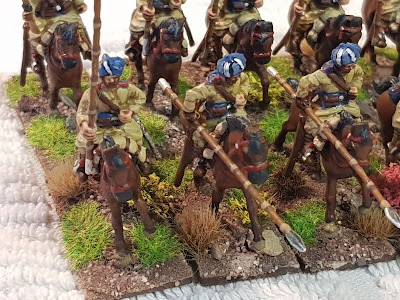 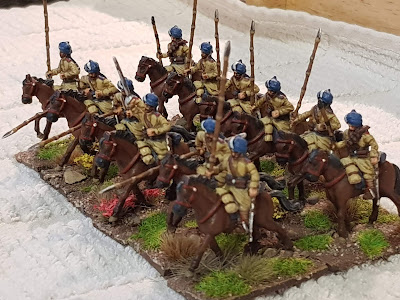 From behind - I could find no images of the neck covering part of the pugree, so followed a similar pattern to that on the front of the puggree/turban.  I added some old gold as a fringe at the bottom, although this may have been reserved for officers and other ranks may have had to make do with a white or some other light coloured fringe. 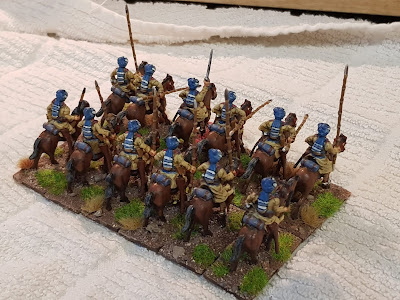 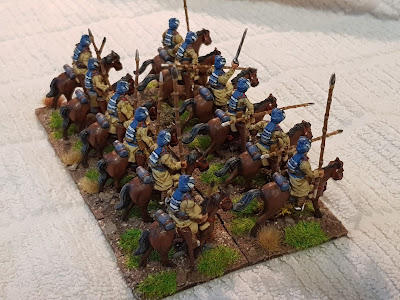 These figures from Hat are made in their soft, bendy plastic, but I found them to be easy to work with.  The soft plastic made it easy to cut away the hilt and guard of the sheathed sword on the officer with sword drawn, as well as the butt of the rifle protruding from the rifle bucket of the two rifle armed troopers.  The bamboo lances don't appear to be significantly bent out of shape, although the very long upright lances mean I have to use a double height storage box to avoid crushing them.  I might add some pennants to the lances at some time, to give some more colour, although they weren't used on active service, so I guess these are more realistic for combat.

These should be useful for early 20th Century operations in the NW Frontier, East Persian cordon, Mesopotamia, Palestine and even on the Western Front, although deployment of mounted lancers in Flanders would have been unlikely in the extreme.  They will also be great for what ifs, such as allied intervention forces in the Russian Civil War for Setting the East Ablaze and may even pop up in the fictional Black Sea country of Andreivia at some point.