This week at the club (Deeside Defenders) we played a Black Powder ACW scenario, based on an article in Miniature Wargames magazine back in 2002/3.  Will came up with the scenario, which was the federal defence of Oak Ridge and Blochers Knoll on the afternoon of the 1st July 1863 (Gettysburg first day).  It's a massive scenario, involving two corps on each side although the union are up against it as the confederates have better commanders and significantly more infantry.

The terrain set up.  Oak Ridge is the line of woods running upper left to lower right in the foreground.  Blochers Knoll is at the far end of the table, more or less in the centre. 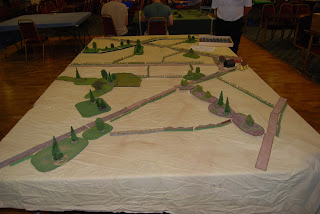 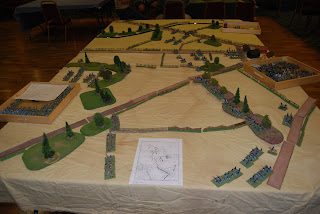 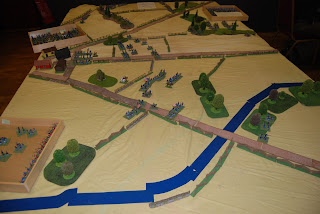 Unfortunately, this is where my photography stopped as, with so many forces on the table, the commanders had their work cut out trying to get enough turns in the evening.  Will agreed to act as umpire, leaving me to command the confederate left flank and Dave the right.  Paul (a thousand apologies for calling you Phil) commanded the union right opposite me and Rick the left opposite Dave.

Rick's union forces on Oak Ridge decided to try and break the on table confederate brigade, so advanced on the rebel lines in force, while the rebels pushed their forces forward in the centre.  On the confederate left flank, my on table brigade started the long job of pushing back the federal skirmish screen in front of Blochers Knoll.

The union forces off Oak Ridge met some withering fire from the confederate right, which thwarted their plans for glory, although the lines traded volleys and casualties.  Progress was mixed in the confederate centre, although the federal skirmisher screen was pushed back behind the formed troops.  Long range artillery duels were coming off best for the union.  On the confederate left, my reserves advanced slowly, while the ond board forces were still trying to push back the union skirmish line (their evade ability is a real pain as charge after charge was evaded).

The decisive moment on the confederate right was the arrival of a brigade on the union flank, which quickly broke the federal brigades in front of Oak Ridge, with most federal regiments broken, shaken or disrupted.  In the centre, union and confederate regiments traded volleys, while over on the left my forces had pushed across Rock Creek and were almost within range of the federal lines around Blochers Knoll, with a fresh brigade coming on table to follow up.  The union had deployed two reserve brigades that were rushing forward towards their centre to fill the lines.

Unfortunately, this represented over three hours of play and it was time to call it a night.  This was unfortunate, to say the least, as the game was still largely in the balance.  The confederates had more or less broken the union forces in front of Oak Ridge, although there was still a union brigade, possibly two, moving to fill gaps in the line.  On the left flank, I had three brigades as yet unengaged, facing two brigades of federal troops so had an advantage in numbers.  This scenario is crying out for more time to reach a conclusion, at least a day to play, possibly two for a full weekend (if a full weekend, it might be possible to add the earlier morning confrontations further south as well.  All in all a great game and lots of fun.  The more I play Black Powder the more I like it and it's always a pleasure to play using Will's 20mm collection - so much so that I'm seriously thinking of adding some 20mm plastics to my own collection to supplement Will's collection - although as his run into thousands, mine will be small potatoes.  I;ll have to kep watching e-bay.  Thanks again to Will for organising the scenario and loaning out his superb forces.

Will has posted on his blog some useful background to how he organised the forces employed for the scenario and his sources, plus how he converted them into Black Powder.