My first efforts at early war vehicles, I have put together a Panzer Battalion.  I was aiming to use these in a France 1940 game at the Defenders next week, but have just realised that the light companies should be predominantly Pz Is, but here I have used PzIIIs, which, I think makes them more suitable for Barbarossa a year later.  They are painted in a white acrylic gesso undercoat and a diluted Vallejo Black Grey.  Tracks are picked out in oily steel and air recognition flags are black, white and flat red.  Flags are painted on aluminium foil, which is draped over the model and glued in place (see "First Post" for origin of this idea).

The whole battalion, 4 light companies, one heavy company, a recce stand and HQ. 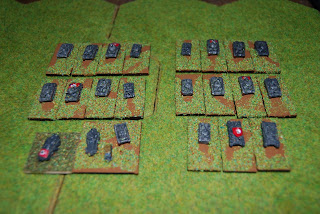 Two light companies from the front, each has a PzII on the left and three PzIIIs. 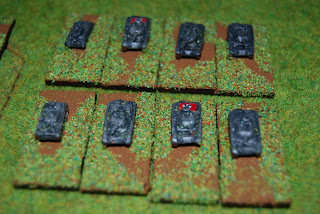 And from the back, showing the air recognition flags draped over the real engine hatches.  Never sure what the impact was of these flags on air circulation and engine cooling, or even potentially catching fire on hot exhausts - assuming they were cloth flags. 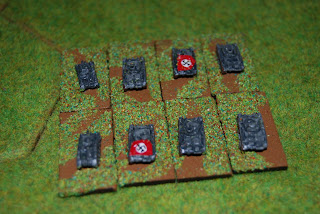 The heavy company, on the left a PzII and on the right two Pz IVs. 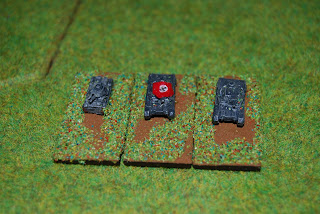 The recce stand and HQ. 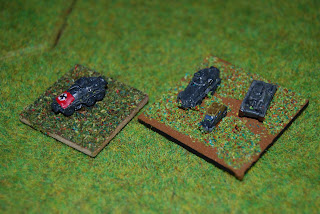 Recce stand is an Sdkfz231-6 RAD, again with air recognition flag - especially important for recce units operation well to the front of regular forces in 1940. 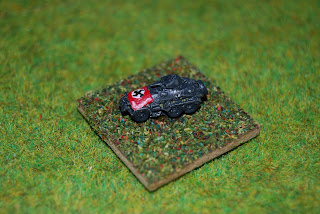 HQ stand, consisting of a PzII tank for security, Kubelwagen for the CO and Sdzfz231-6 RAD 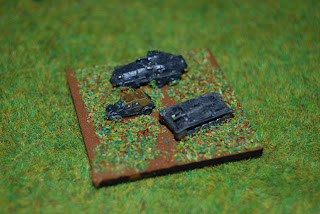 So, perhaps better suited to taking on Soviets in 1941 rather than trading shots with Matildas at Arras - might have to pretend the PzIIIs are Is for the upcoming game.

Thanks for looking.
Posted by Andy Canham at 19:39